Enjoying St. Petersburg from Rooftop
Rooftop tours have become a popular choice among visitors to St. Petersburg in Russia. These tours literally give you a fresh perspective: you’re not looking up at buildings from the street, nor are you taking in the view of the city from the top of an observatory. Seeing the city at the same eye level as buildings is quite fascinating.
It’s been three months, and it’s now widely believed that the COVID-19 pandemic will change the world order and human values forever. What do states and territories mean to individuals now? Question like these are floating around in cyberspace. They must have surfaced because this is the first existential crisis of this generation. In times of war, we all would be asking such questions. And in case of massive conflicts such as a world war, then these questions will imply so much more. 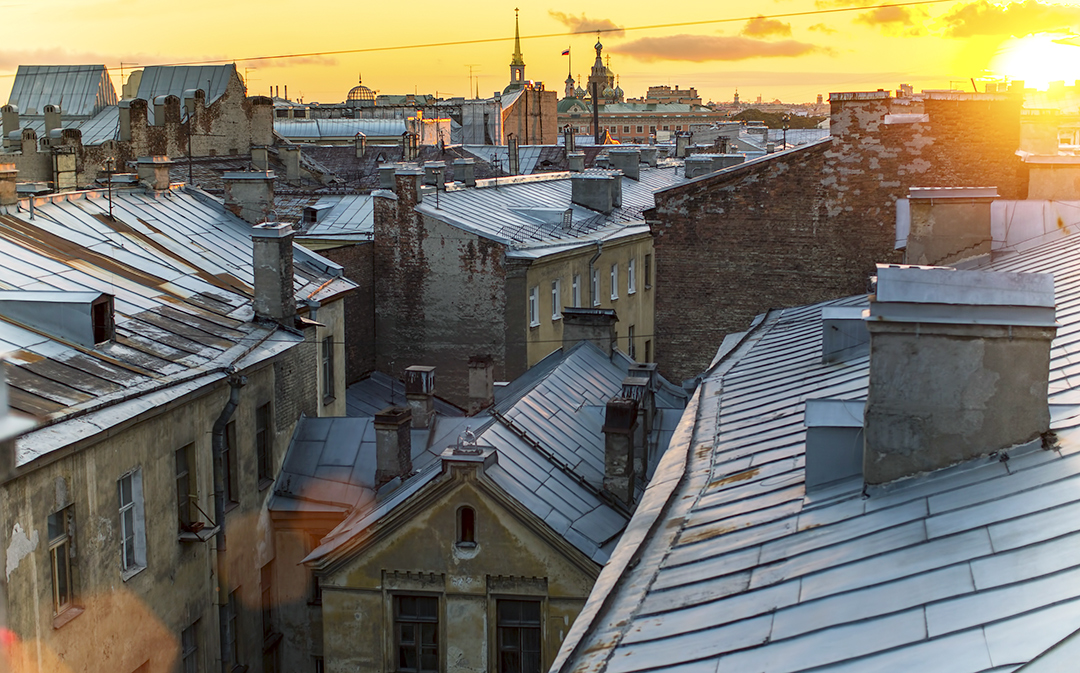 Old downtown of St. Petersburg viewed from a rooftop © Shutterstock

Traces of War in St. Petersburg
The Siege of Leningrad was a military blockade during World War II. The Nazi German forces held control of Leningrad (St. Petersburg today) for years. They came in from the south, and the Finnish army invaded from the north. Records show that the siege was lifted after 872 days. Leaving about 4 million dead or injured, it became one of the longest and deadliest sieges in history. If such a blockade lasts that long, we were bound to see some disturbing numbers.
The Russian forces didn’t have what it took to take on the German Nazi. But they still fought tooth and nail. They built fortresses and made hundreds of shelters against air raids. Most of the forces were civilians who weren’t properly trained, but they tried their best to protect one another. That’s how they guarded what is now St. Petersburg.
It has been about 75 years since the end of war, but you’ll still see hints of the conflict in the city. Some 160 air-raid shelters remain in place today. One must wonder what their use must be now. 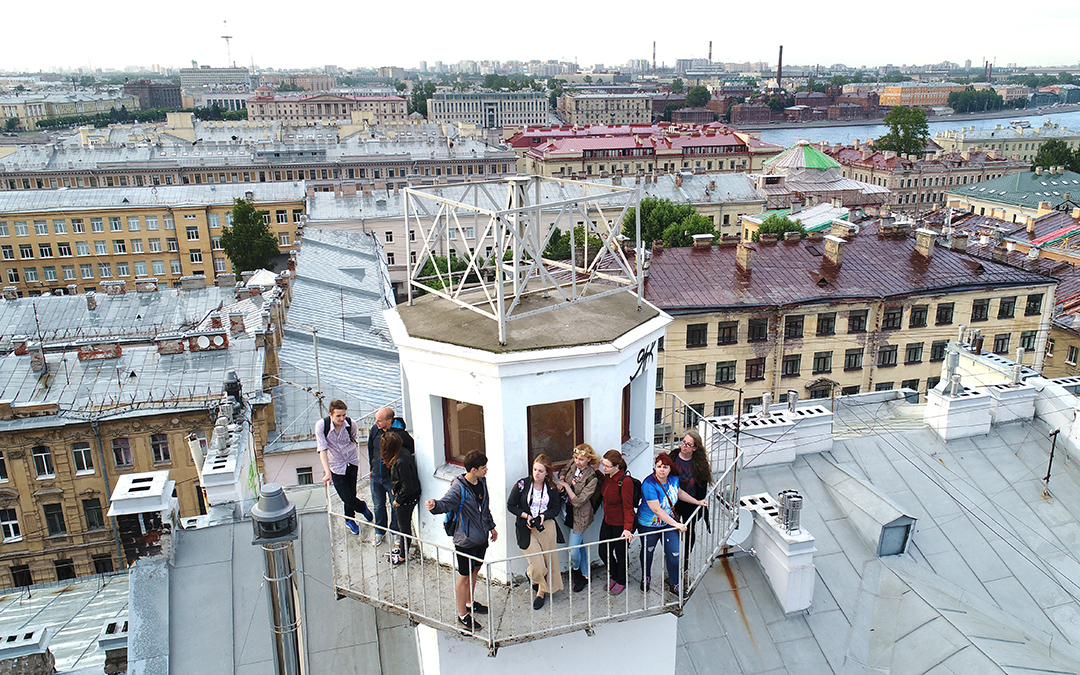 Scars of Past, Tourism for Present
Those shelters are now used for tourism, in particular for exhilarating rooftop tours. They’re called ‘St. Petersburg Rooftop Tours’ or ‘Walks on the Roofs.’ Tourists follow their guides and climb to top of buildings, and hop from one roof to the next. You’re able to do so in St. Petersburg because buildings in the city, where winters are often brutal, have been erected with little space between them so as to keep out chilly winds. And most of the structures in the old downtown were put up in the 18th or 19th centuries, and they also have little, if any, space between them. Of course, not every building is set up like this. 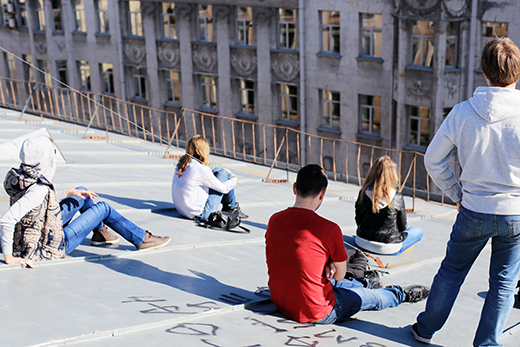 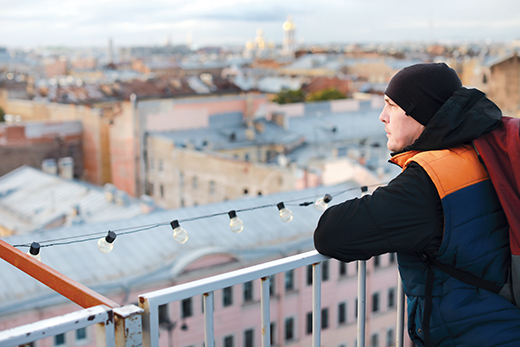 Travelers enjoying the view of the city from a rooftop © Shutterstock

It’s not clear when these tours first began. Young folks have long enjoyed taking in the view of the city from the top of air-raid towers, and this developed into a tourism program for visitors. Or at least this is the most plausible theory.
Early on, rooftop tours mostly covered these towers. And as the programs grew more popular, you can now get on top of any buildings authorized for rooftop tours, whether or not they have air-raid shelters.
It’d be nice to feel a part of history, but these tours are really about enjoying the view of downtown St. Petersburg. The entire city is a UNESCO World Heritage Site, and to see it from the eye level of buildings – rather from streets or from towering observatory – is something that’s unique to these tours. And rooftop tours work in St. Petersburg because the city has few skyscrapers. 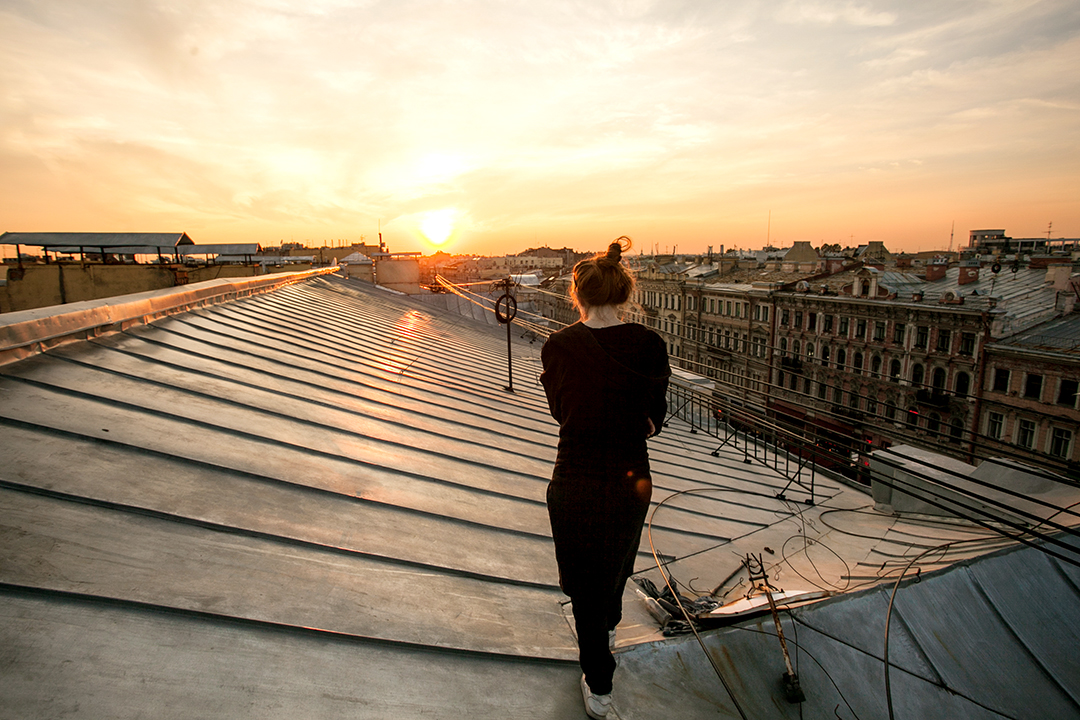 A tourist walking on the top of a roof © Shutterstock

Romantic Tours
A typical rooftop tour takes anywhere between an hour and an hour and a half. There are different routes and prices for each program. You can usually go to the tour agency’s website or use TripAdvisor or other travel apps to book your tours. Tourists meet in front of a designated building and they go from there.
Up the dark staircase and past the small door, you’ll get the panoramic view of St. Petersburg. Classic buildings are lined up neatly in all directions along Nevsky Prospekt. Kazan Cathedral, one of the city’s great landmarks, can be seen in the distance. The gold roof of Saint Isaac’s Cathedral and Trinity Cathedral also come into the view. 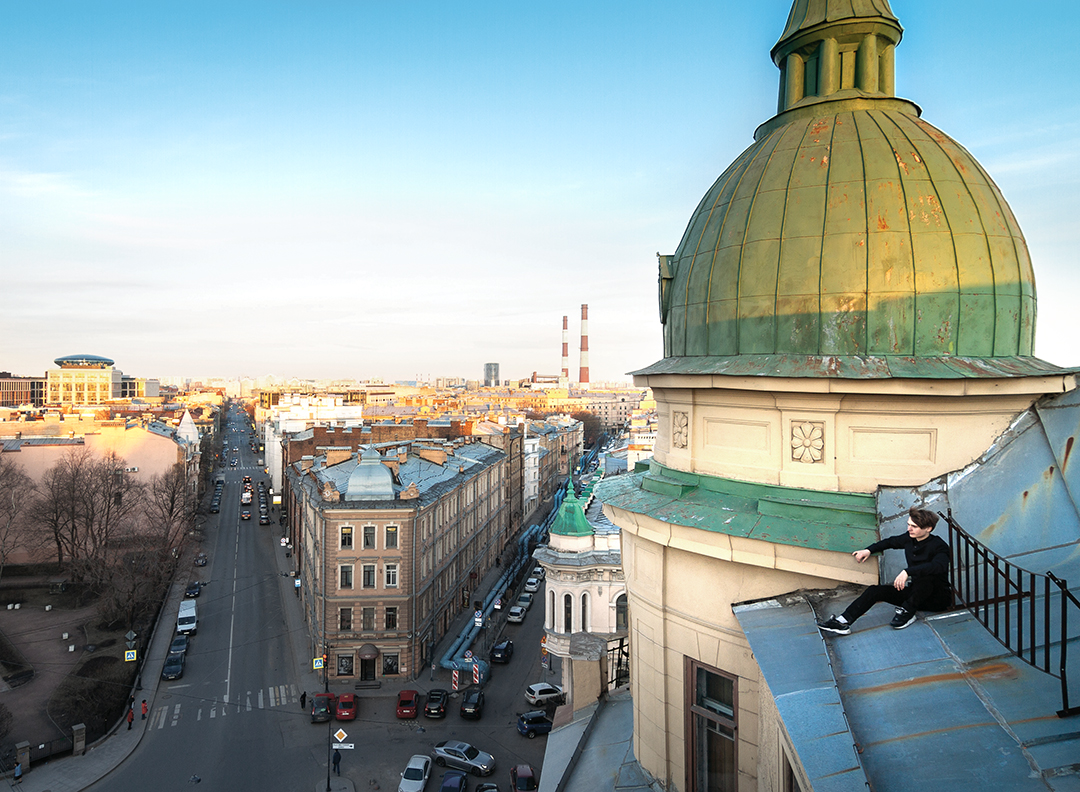 Rooftop tours aren’t as dangerous as they look. © Shutterstock

Walking on rooftops is exactly t as thrilling as it sounds. Maintaining balance on top of the sloping roofs is not that easy. But also, it’s not as dangerous as it may seem. You’ll remain on a designated course, and most roofs have protective edges. Some programs will require helmets. And running shoes are recommended.
Romantic thoughts are sure to pop in your head as you soak in the beautiful view of St. Petersburg. And you’ll see your share of romantic, rooftop proposals against the gorgeous backdrop of St. Petersburg at sunset. And these occasions can be romantic because they take place in the heart of St. Petersburg. Everywhere you turn, love is in the air in the city.
Once the global pandemic is contained and you’re free to travel around the world, St. Petersburg should be at the top of your “places to visit” list. Go up to the roof at one of those pretty St. Petersburg buildings, watch the sun go down and then breathe a sigh of relief. 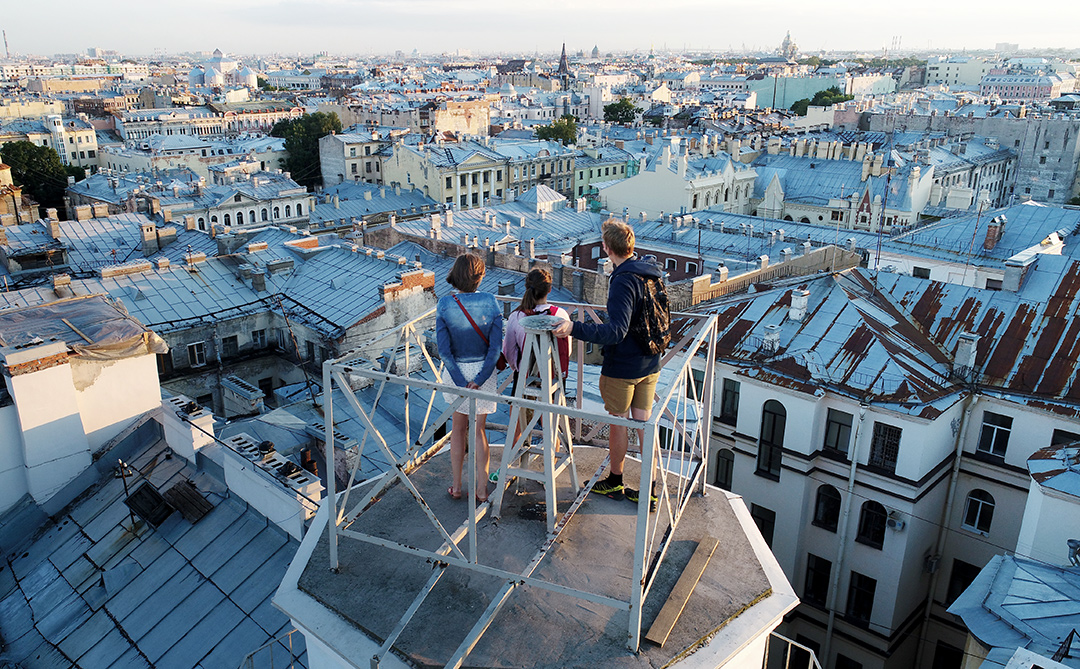 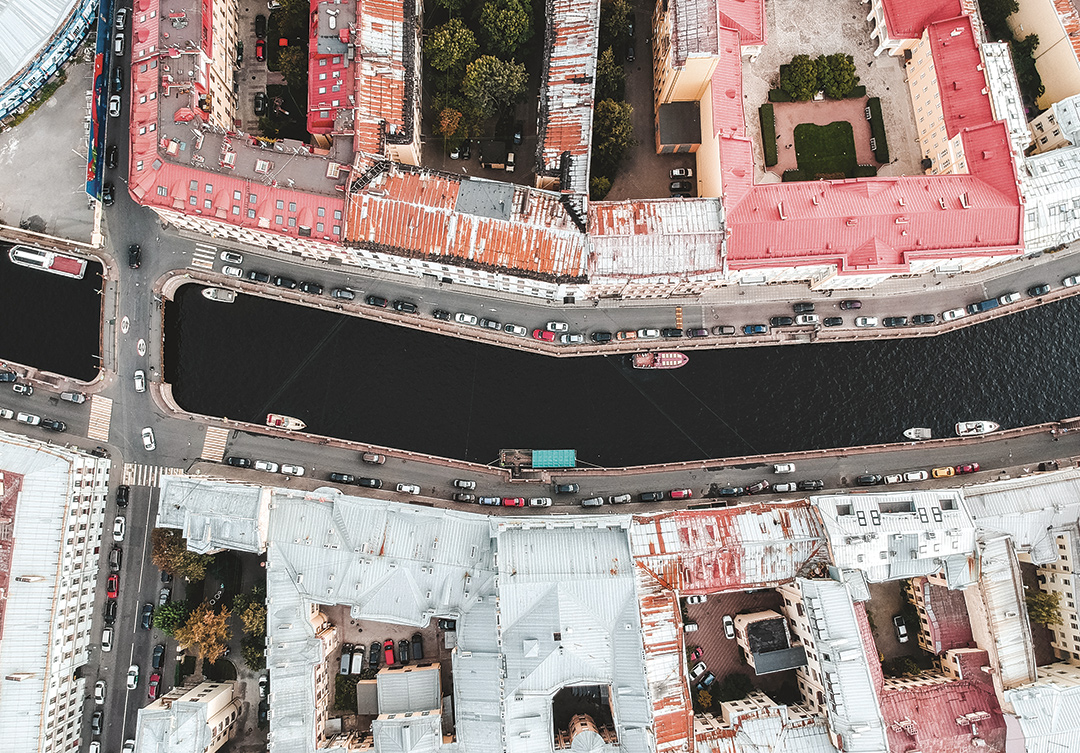 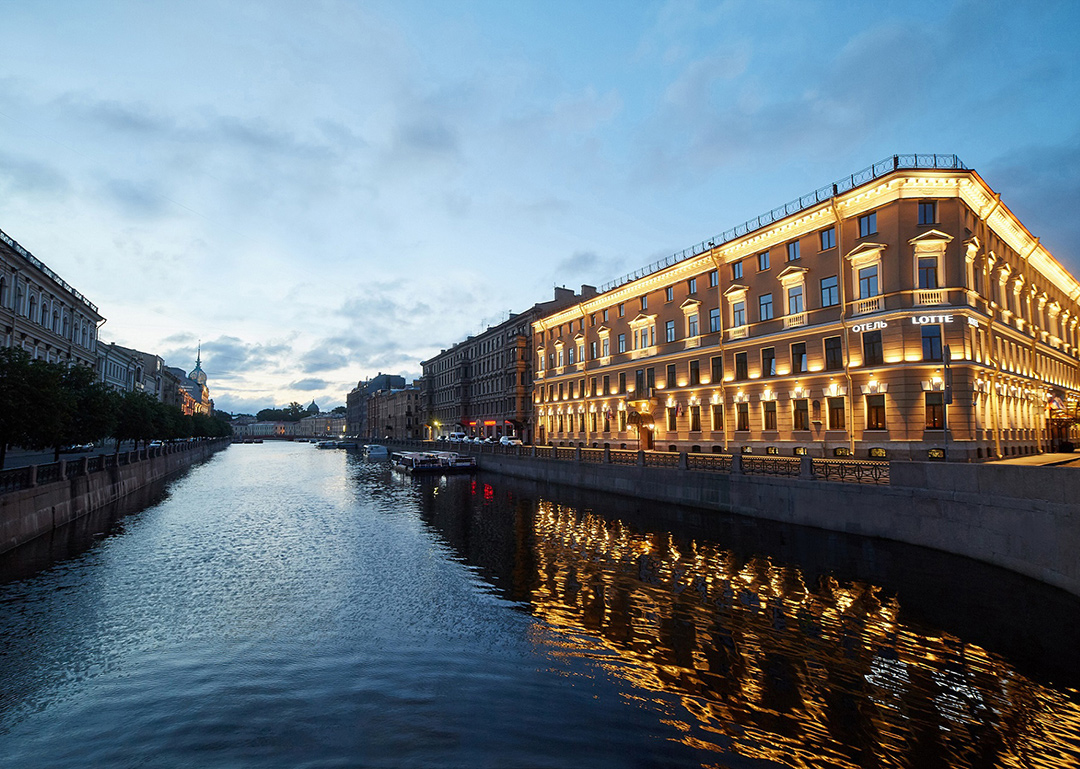 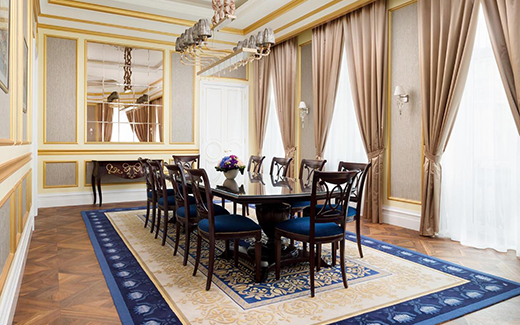 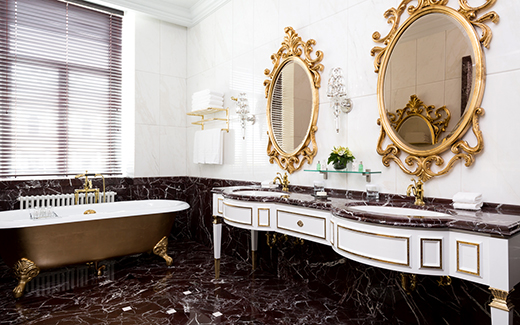 Where to Stay in St. Petersburg: LOTTE HOTEL ST. PETERSBURG
LOTTE HOTEL ST. PETERSBURG stands across the square from Saint Isaac’s Cathedral, perhaps the most famous landmark in the city. The hotel is housed in a historic building, constructed in 1851 and remodeled since, and is in close proximity to other attractions such as Nevsky Prospekt, the Hermitage and Mariinsky Theatre. It has one underground floor and six floors above the ground, and 150 guest rooms come in 10 different types. The hotel also offers a wide range of restaurants and amenities.
Address  2, Antonenko Lane, Saint-petersburg, Russia, LOTTE HOTEL ST. PETERSBURG
Phone +7-812-336-10-00
Website www.lottehotel.com/stpetersburg-hotel