Classic Road Trip, 36 Streets in Hanoi Old Quarter
A city steeped in a thousand-year history embraces those maintaining their ancestors’ slow-paced way of living as if to reenact a glorious moment from the past. We look into the 36 streets in the Old Quarter of Hanoi, Vietnam, to figure out a secret behind the charm that brings the contemporaries to the ancient district.
In the movie “Interstellar,” NASA pilot Cooper’s team embarks on a space exploration mission to find a new planet for mankind. Their first destination is the planet Miller. After a three-hour survey, they return to their spacecraft and find their colleague who has been awaiting them much older. One hour on Miller turns out to be equivalent to seven years in Earth time. The gravitational force of a black hole caused Miller a time dilation factor of 60,000.
On one side of a row of modern buildings and a busy street loud with honking sounds from cars and buses in downtown Hanoi, an ancient stone gate stands drawing attention with its disparate appearance. In fewer than 10 steps past the gate, you will find an extraordinary world that is unimaginable from the opposite side. The Old Quarter is where the Vietnamese capital city keeps all the traces of its thousand-year history. It is where time flows slowly. It is where the history of the city is kept alive.
If the planet Miller’s time was dilated due to the black hole’s gravity, what is Hanoi Old Quarter’s secret that enables the city to remain in a slower time zone, metaphorically speaking, and keep its thousand-year history almost intact? 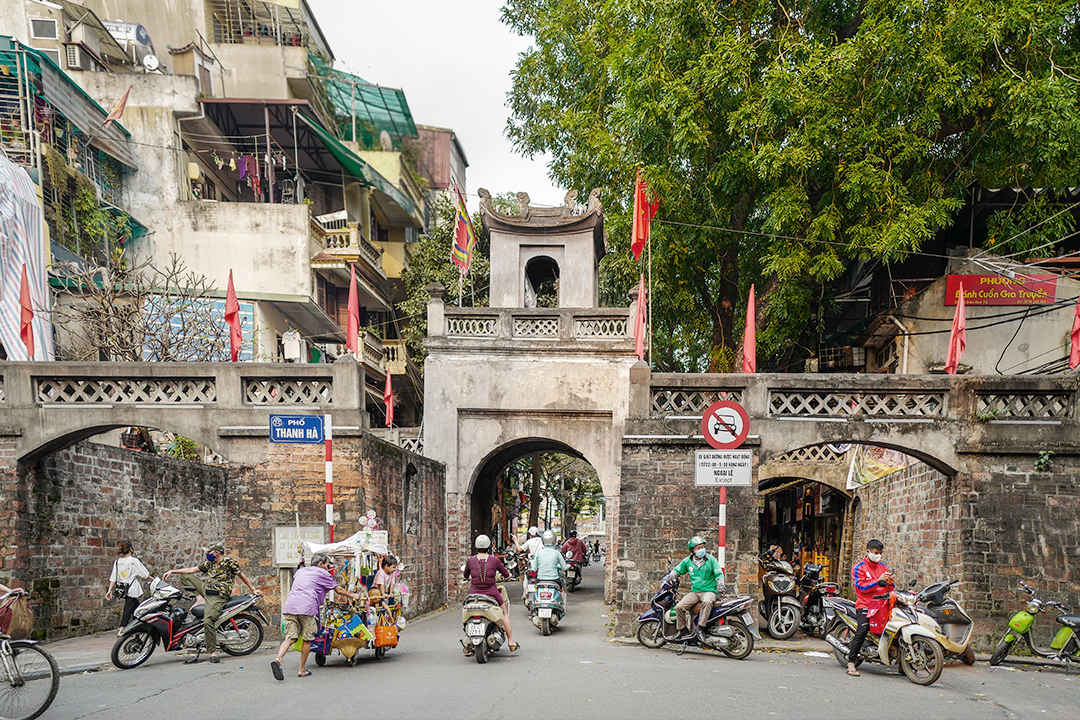 An old stone gate that piques your curiosity © Jeon Haein

Hanoi, Capital of Thousand Years
To understand the history of Hanoi, we travel a thousand years back to the year 1010. Vietnam’s Ly dynasty designated a new capital city after liberation from China and named it the Imperial Citadel of Thang Long, which is present-day Hanoi. During the heyday of Vietnam after achieving independence from the thousand-year rule by China, the people of Vietnam built a foundation for a sovereign state of the Viet tribe. The capital, back then, served as the basis of the regime and a source of national pride. A royal palace was constructed in the center of the city while the outskirts harbored the commoners, becoming their home. The city soon saw the formation of a commercial district with year-round trade activities in an area now known as the Old Quarter, where traditional markets are keeping the spirit alive today. 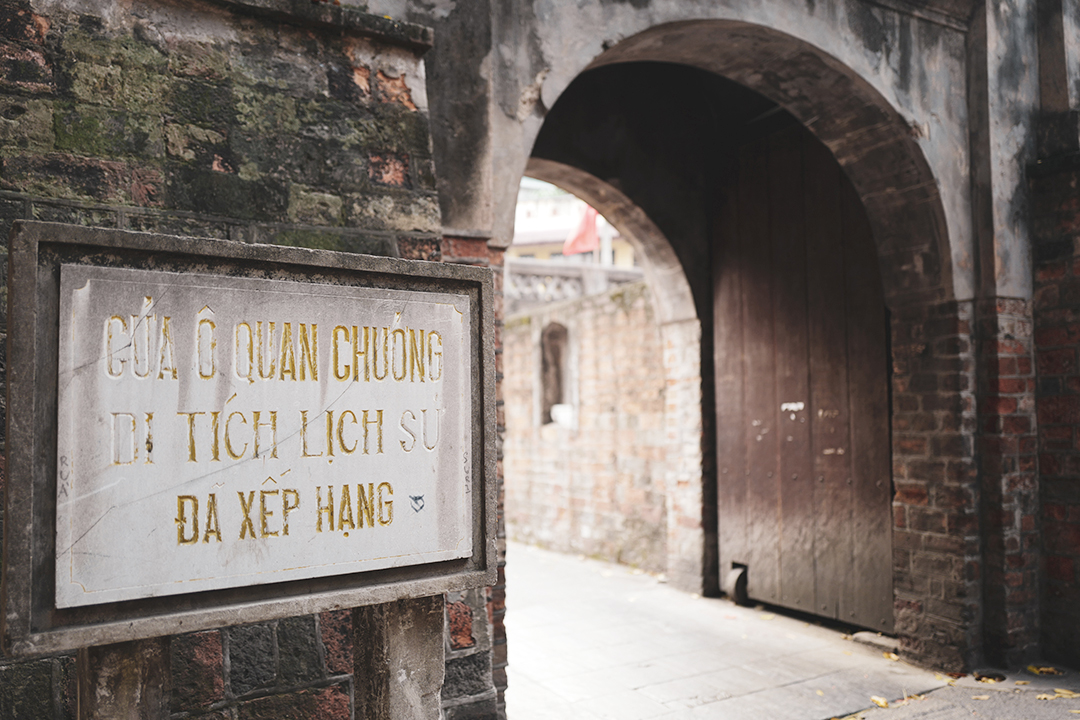 O Quan Chuong, a stone gate outside the eastern end of the Old Quarter © Jeon Haein 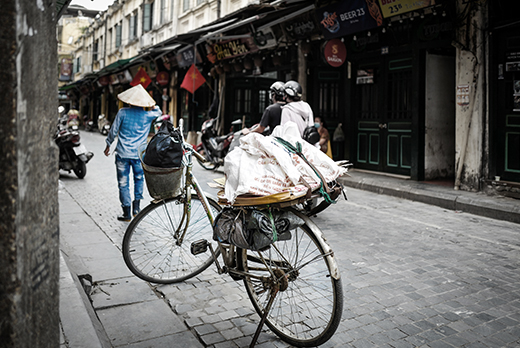 Gateway to History
There is a stone gate in the eastern outskirts of the Old Quarter. Despite its ordinary size, the gate has history written all over it. It was named ‘Dong Ha Mon’ as it opened to the Red River in the east of the city and served as an entrance to Thang Long’s earthen fortification that was built in 1749. Back then, all passengers entering Hanoi from the river side would have been required to go through this gate. It is currently called O Quan Chuong, which calls for more explanation. In 1873 when Hanoi was occupied by the French army, a Vietnamese officer named Chuong died while fighting to guard the gate. Hanoi citizens commemorated his sacrifice by renaming the gate O Quan Chuong, meaning ‘a door to get to a faithful officer.’ The ancient gate carries traces of important figures and events in the history of Vietnam, and the will of the Vietnamese people to protect it regardless of the cost. It’s not just a gate, but a standing proof of the strong life force of Hanoi. 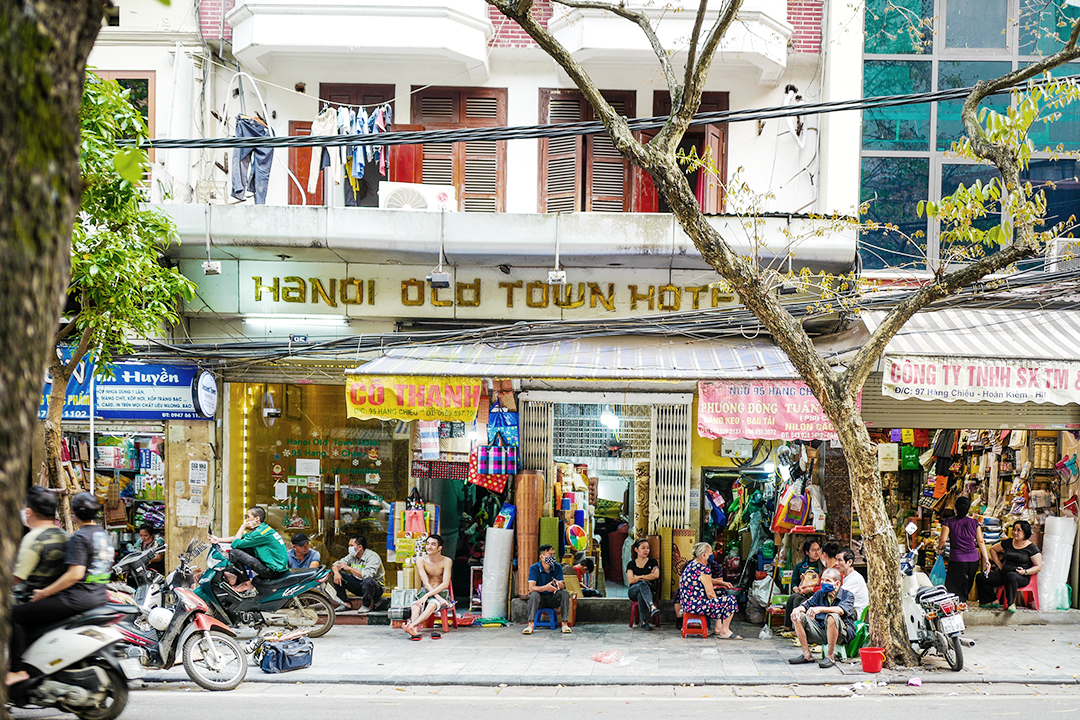 View of the 36 Streets © Jeon Haein 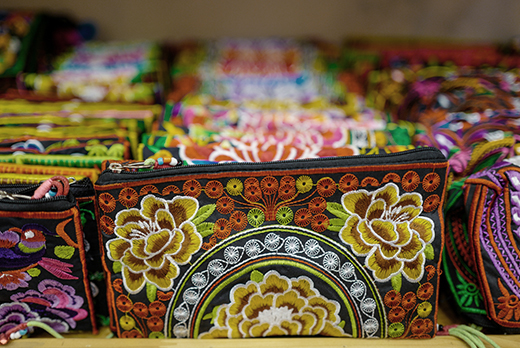 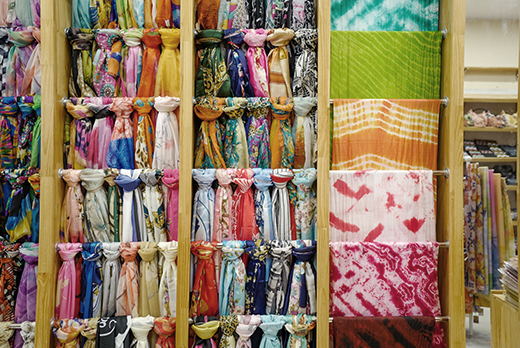 Time-Slowing Magic, 36 Streets
The highlight of the Old Quarter is the market district named ‘36 Streets.’ The name originates from 36 guilds of craftsmen and merchants who divided the area according to their specialties in the 15th century. Most street names start with the word ‘Hang,’ which means shop or merchandise and end with the type of wares sold there. For example, a street of jewelry shops is ‘Hang Bac’ as ‘bac’ means silver. A street dealing with poultry is ‘Hang Ga’ as ‘ga’ means chicken. A street selling sweets and sugar-coated fruits is ‘Hang Duong’ as ‘duong’ means sugar. There have been many changes in the area over time, with new shops and streets opening and others closing businesses. Currently there are over 76 streets housing all sorts of shops selling various items, including handicrafts, art, daily necessities, groceries, and clothing. It is a vibrant outdoor marketplace. It would not be too much of an exaggeration to say, “If it’s not in the 36 Streets, it can be found nowhere else in the world.”
Hanoi’s 36 Streets form a closely-knit merchant community where the scenes of strenuous efforts by the working class to make a living catch your attention, with the backdrop of centuries-old traditional Vietnamese buildings. The area appears as if it doesn’t belong in the modern world. While the rest of the city accepts rapid transformations accompanying modernization, this corner in the Old Quarter adheres to the thousand-year-long tradition. There’s a clear reason why the 36 Streets fascinate global tourists. 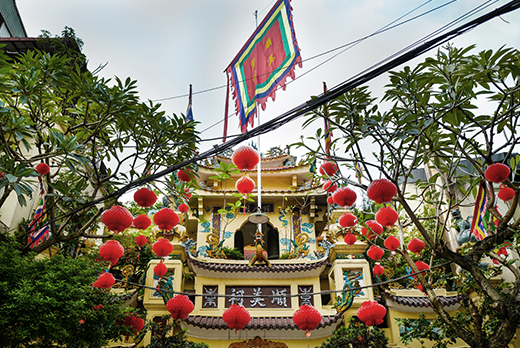 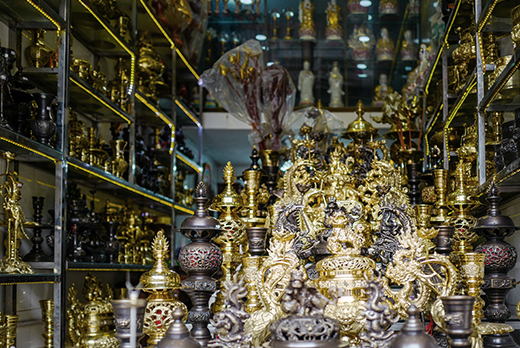 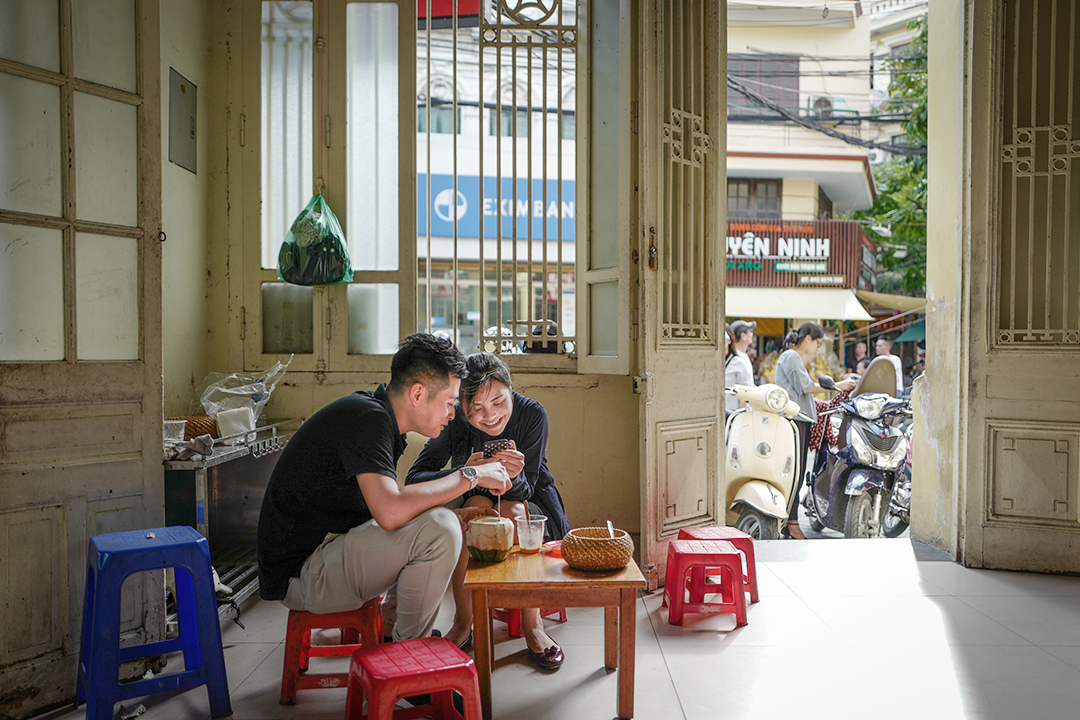 What are some of the streets more popular with tourists? The first is Hang Gai Street, housing silk stores and clothing shops. Colorful textile products on display including handmade silk scarves and design clothes are a sight to see. You can join the latest trend of renting or buying a tailored traditional Vietnamese costume called ao dai at Hang Gai. It’s also a good place to buy a high-quality souvenir. Meanwhile Luon Van Can Street is popular among families with children. Various toys can be purchased at affordable prices. Selecting and buying local toys can be a key to making a trip with children easy and fun. For those interested in items for religious or ancestral rites, visit Hang Quat Street where Buddhist stores are located. Wooden ritual tables, altars, and candlesticks made of precious metals can be found.
We recommend you go to Hang Duong Street for sweet street snacks in the daytime, enjoy the cozy local atmosphere, and visit Ta Hien Street in the evening to drink beer and feel the vibrant energy of this exotic travel destination. 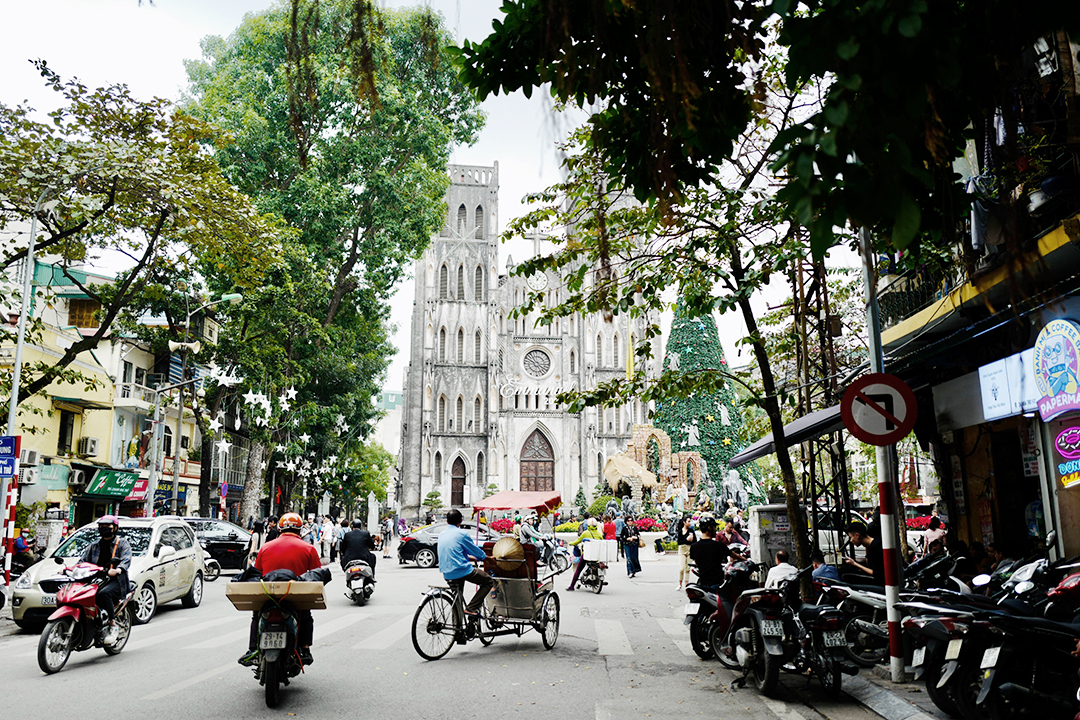 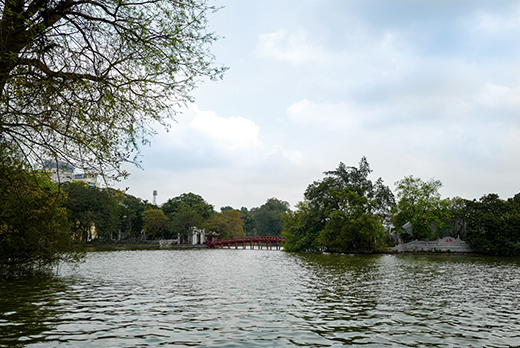 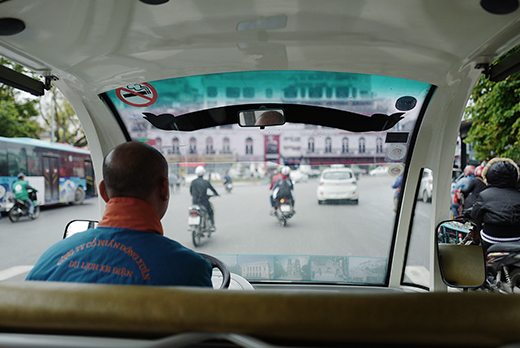 Electric Vehicle Tour of Old City
You can travel the Old Quarter on an electric vehicle departing from Hoan Kiem Lake. The tourist program lasts about 35 minutes to an hour for a slow tour of the area. It offers a doorless electric car in which you can comfortably enjoy the ride around the traditional Old Quarter streets. The experience gives you a chance to observe closely the markets selling goods to Hanoi citizens, rickshaws carrying passengers, residents exercising outdoors, and children engaging in various games. These everyday, heartwarming scenes of Hanoi will last in your mind for a long time.
Address Bai do xe Ho Guom, Hang Trong, Hoan Kiem District, Hanoi
Inquiry +84-94-348-6636 dongxuantour@gmail.com
Price Electric vehicle rental(per group) KRW12,000 for 35 minutes, KRW18,000 for 60 minutes 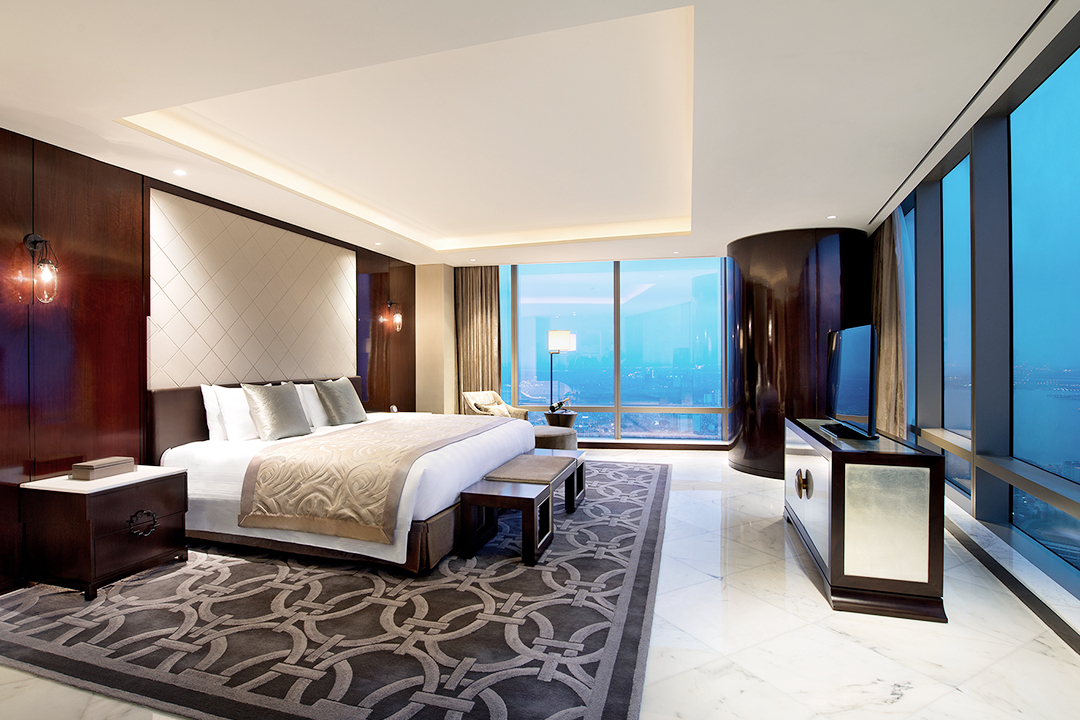 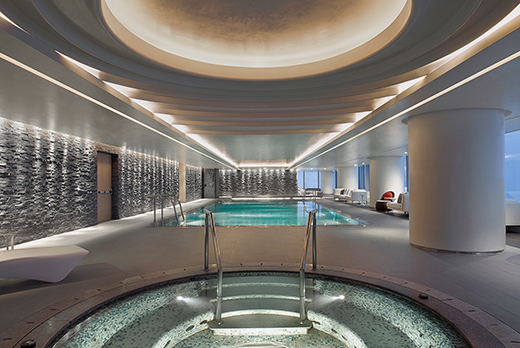 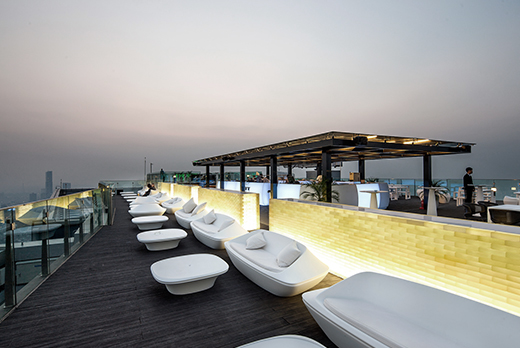 Where to Stay in Hanoi: LOTTE HOTEL HANOI
LOTTE HOTEL HANOI is located in a 15-minute drive from the 36 Streets of the Old Quarter in the upper floors of LOTTE CENTER HANOI, a new landmark skyscraper in the Vietnamese capital. With a breathtaking view of the entire city, the hotel features 318 rooms of sophisticated designs using traditional Vietnamese patterns. Raved by tourists from across the globe, the hotel’s restaurants offer epicurean experiences of Vietnamese specialties and premium-quality ingredients. There is also a rooftop bar famous for its panoramic view of Hanoi’s skyline.
Address 54 Lieu Giai St. Cong Vi Ward, Ba Dinh, Hanoi
Inquiry +84-24-3333-1000
Homepage www.lottehotel.com/hanoi-hotel