Climbing Yongnuni Oreum on Summer Night
At sunset, we hike toward the top of Oreum, a volcanic cone, moving in the opposite direction to those descending from it. Patiently awaiting the nightfall as we brace ourselves against the chilly island winds, our goal is to witness the curtain of stars in the sky above Yongnuni Oreum. We are on a night trekking journey involving this particular Oreum, one of over 360 parasitic cones, a natural wonder unique to Jeju Island.
Why Oreum is Popular
Among various reasons Oreum is considered a must-see feature of Jeju, one is its serene ambience. When you stand on top of these hills, you feel you have the whole lush island to yourself. With a few exceptions near the coast, Jeju Oreums are mostly located in middle mountain areas, offering the climbers who look down upon the grassy fields and plains a one-of-a-kind sensation that they are somewhere far away from the tiny people and houses seen down the hill. It’s as if you’ve found an unmanned islet within Jeju. The only difference is that your land feels even more unfamiliar than the actual island. To get the most of the charm Oreum presents, you should travel with a small group of very close friends rather than with a big party. It would ensure you get as much peace and solitude as you need. The same applies to visiting Oreum in the evening. 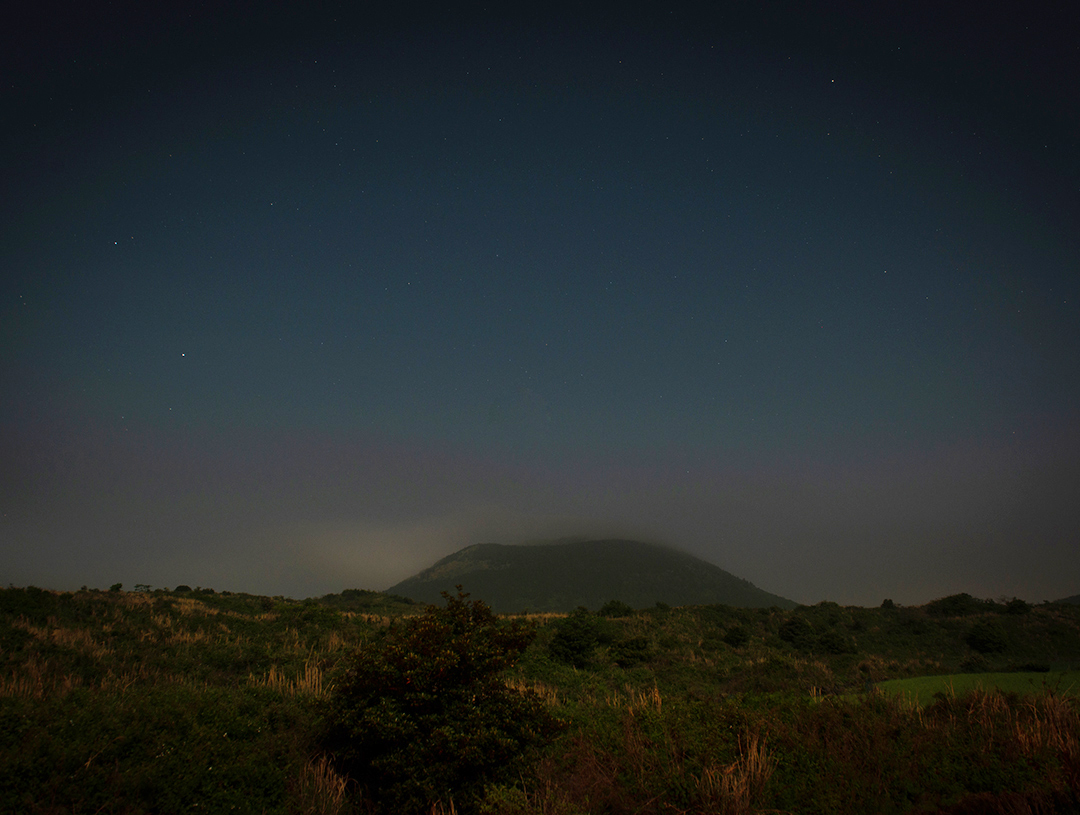 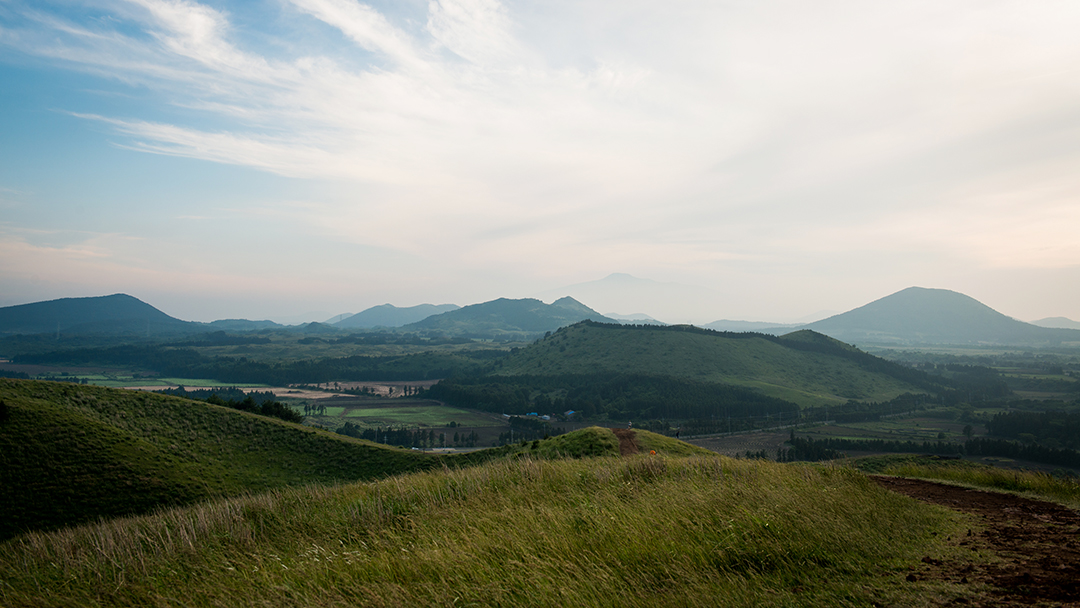 If you choose not to join a tour group but climb Oreum by yourself, try to begin trekking earlier around sunset instead of waiting until it’s dark. Regardless of how easy the course may be, walking at night could be dangerous. It is recommended that you familiarize yourself with what would be your return route as you hike up the hill before nightfall. 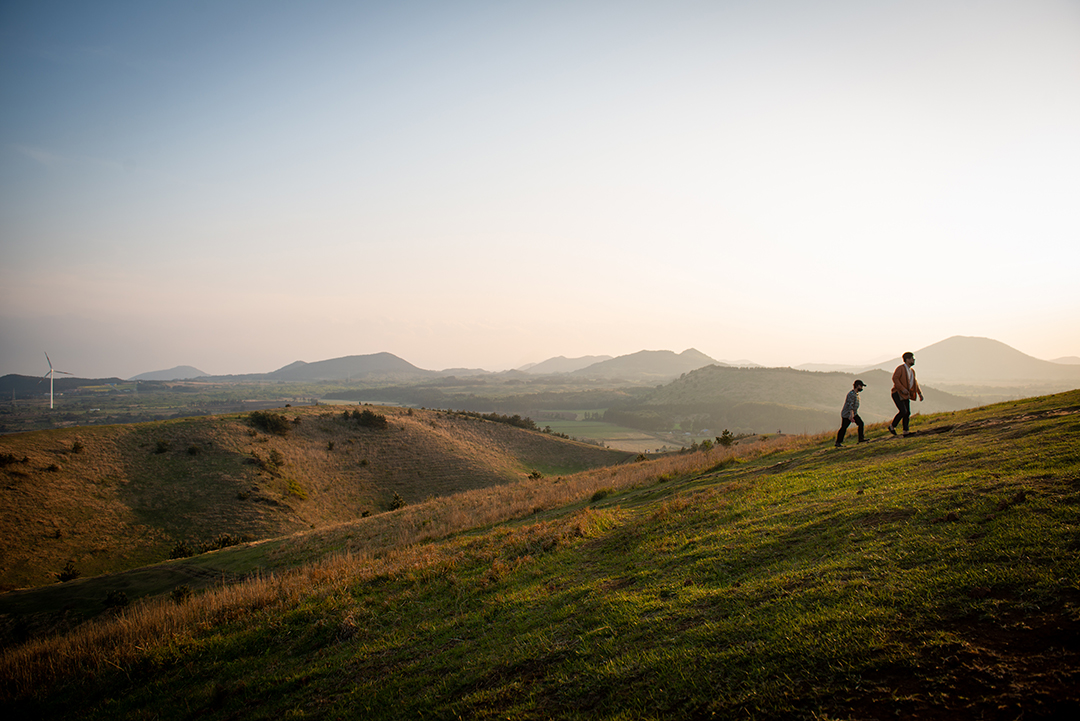 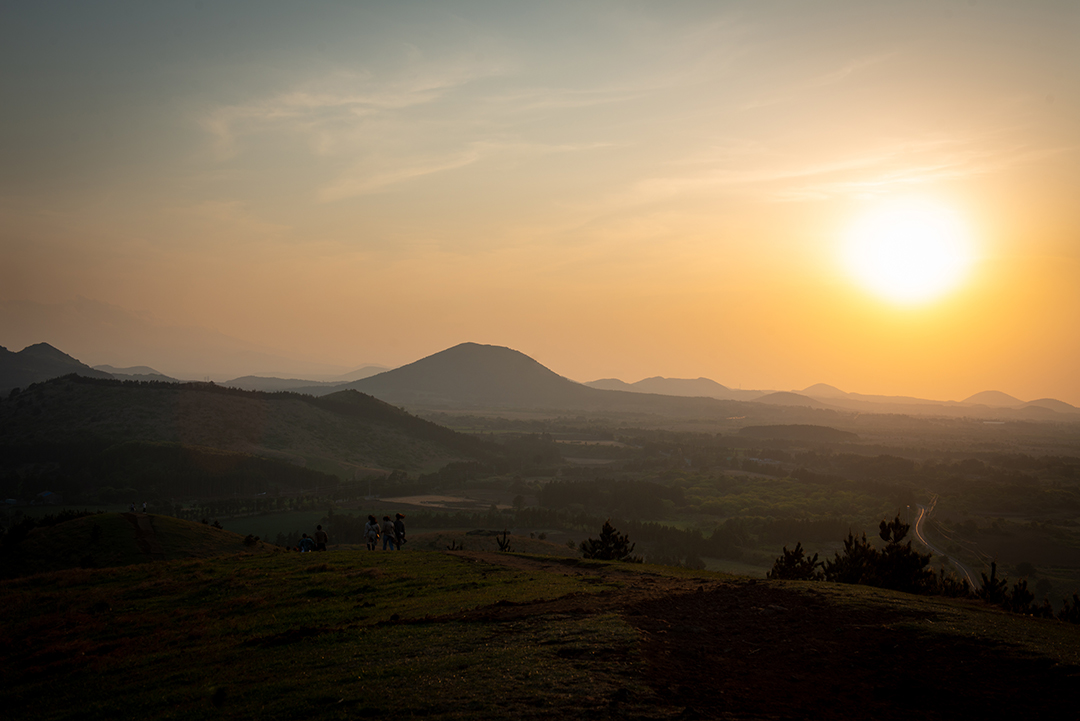 For many, sunset is a signal to end the Oreum hiking. For others, it is the start of their special evening on Oreum. Those who remain on the hill as the sun disappears below the horizon would likely want to see the mesmerizing evening glow of Jeju. Most of them head back down afterwards, while the rest stays put to continue trekking at night. They endure gusty Jeju winds and wait for the complete darkness to loom over their heads. The moon, once translucent, becomes vivid and stars emerge out of nowhere. That could be your Oreum moment when you feel wholly isolated in the universe. Standing against the whirling winds and gazing at starry night skies, you may also feel like you’re floating in space. 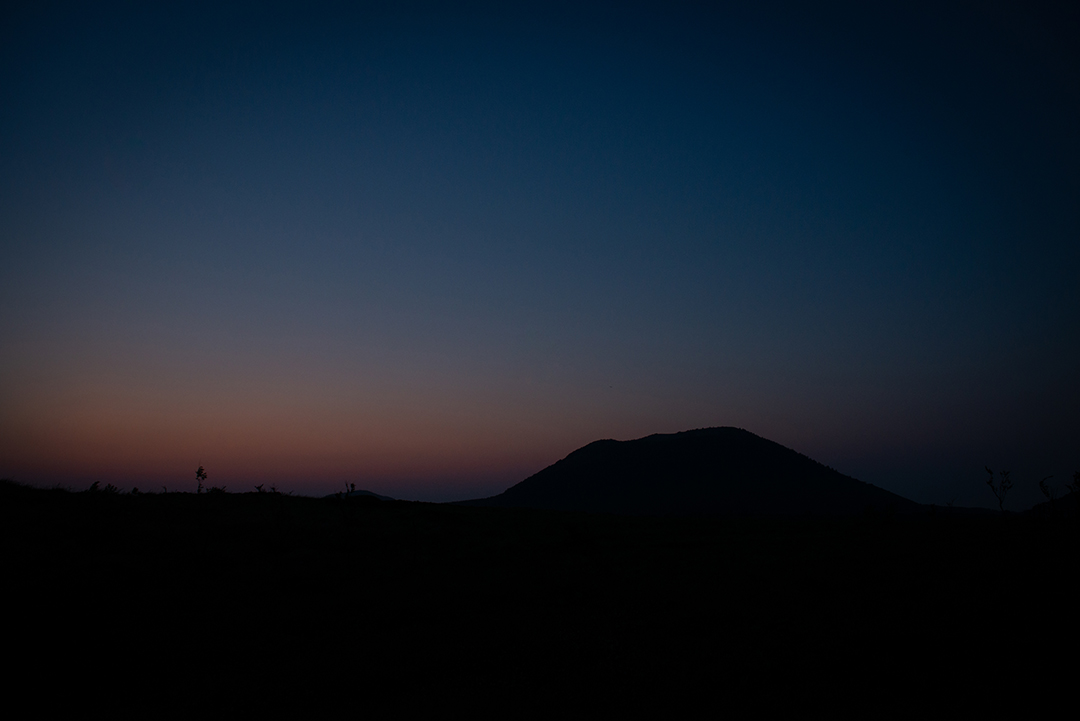 Yongnuni Oreum Trekking
There are a total of 368 Oreums in Jeju Island. Even if you take on one each day, it would take longer than a year to conquer them all. Located in eastern Jeju, Yongnuni Oreum is the most popular among tourists. Its beautiful ridge and proximity to a parking lot make the venue accessible. The gentle slope allows people of all ages and gender to enjoy trekking within an hour or so for a roundtrip. Its glorified name of ‘Yongnuni’ has diverse theories regarding its origin. Some believe the legend that says the name was given because of the shape of the volcanic cone, which resembles a sprawling dragon. Some argue the concave crater looks like a dragon’s path. ‘Yongnun’ could also mean ‘a dragon eye’ in Korean and that leads to a theory the crater seen from above is a dragon’s eye. No matter how different the stories may be, one thing is clear. As you make your way up the hill, you will find the name to be a perfect choice for this Oreum. 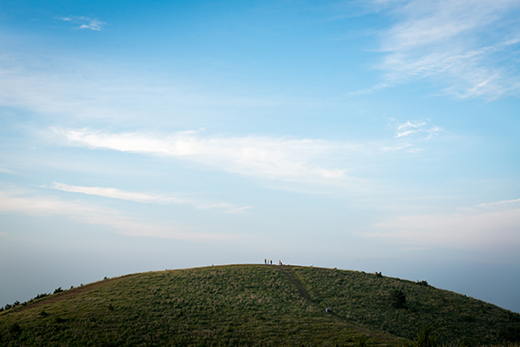 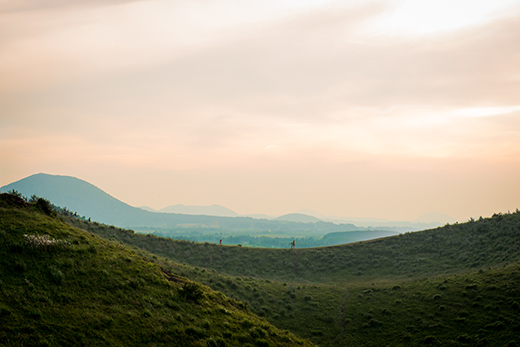 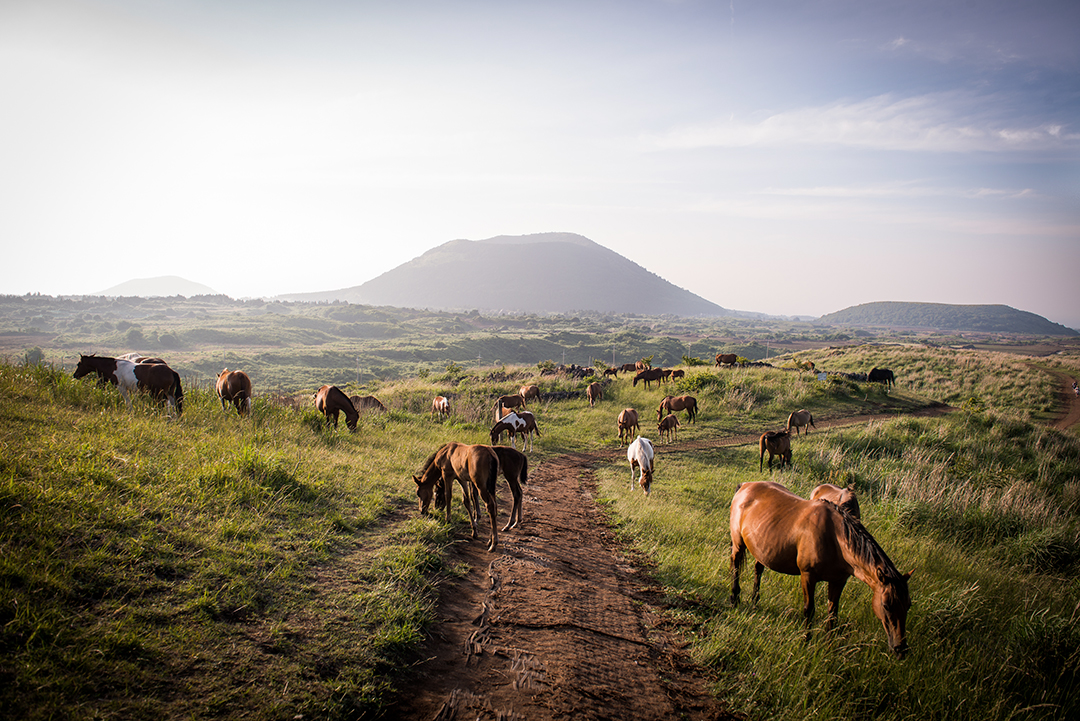 If you go trekking on Yongnuni Oreum in the daytime, you will encounter various age groups, including children and senior tourists. Some hikers are in their flip-flops while others are pushing strollers. It all implies that Yongnuni Oreum has a very gentle slope. Its trail is also maintained well to accommodate a large volume of visitors. You just have to follow the trail and will reach the apex in no time.
Address Yongnuni Oreum, San-28 Jongdal-ri, Gujwa-eup, Jeju-si, Jeju Island 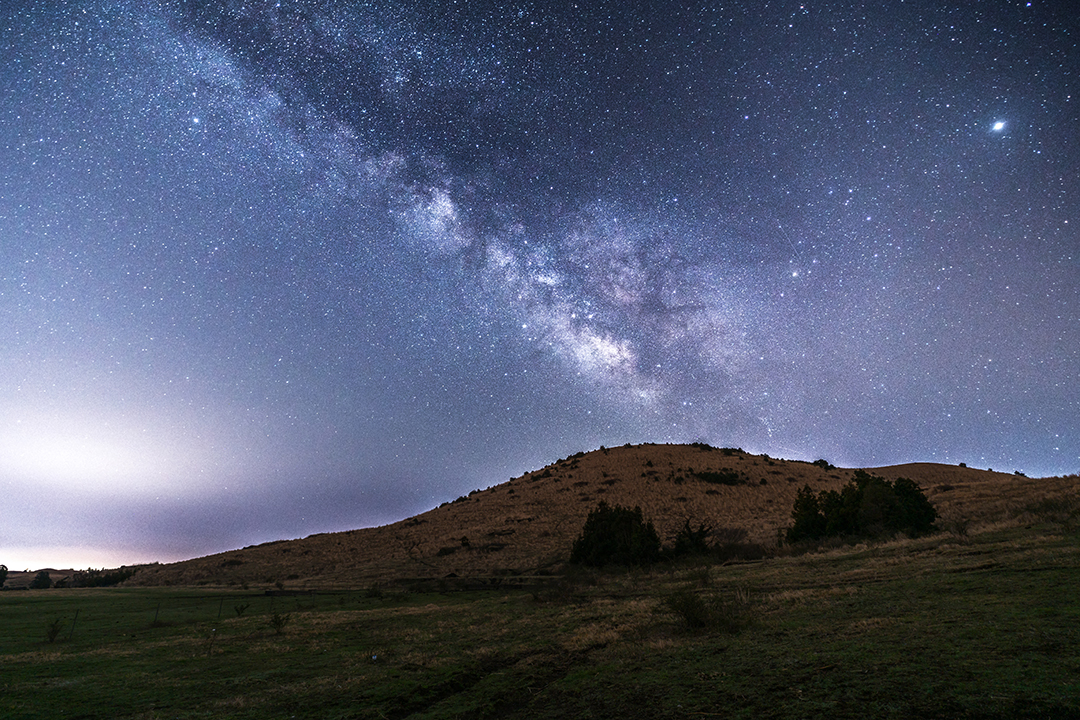 Must-Haves for Oreum Night Trekking
1. Flashlight & Head Lantern
It’s not all romantic up on Oreum at night. The gentle slope does not mean you don’t need any light in a dark mountain. Although it gets bright enough on a night of the full moon, you need to have a flashlight. Make sure you have that or a head lantern. It helps you avoid potential falls, but it also serves you well in avoiding animal droppings on the trail.

2. Comfy sneakers
If you’re hiking during the day, you may wear sandals or leather shoes. However, a nighttime trekking requires sneakers. If you trip over a rock or miss a step, you could hurt yourself badly unless you are wearing proper shoes.

3. Windproof Clothes
Jeju Island is notorious for its strong winds. Even on a tranquil day, the top of Oreum may greet you with gusty winds. They get worse after nightfall. A hat is of no use. Avoid wearing clothes that may be cumbersome in a windy area. Choose pants or jeans that are tight-fitting to minimize resistance to the wind as you move. Your hair will be utterly out of control so you are advised to wear a hooded top. The temperature could drop suddenly even in summer, so bring a warm jacket along just in case. 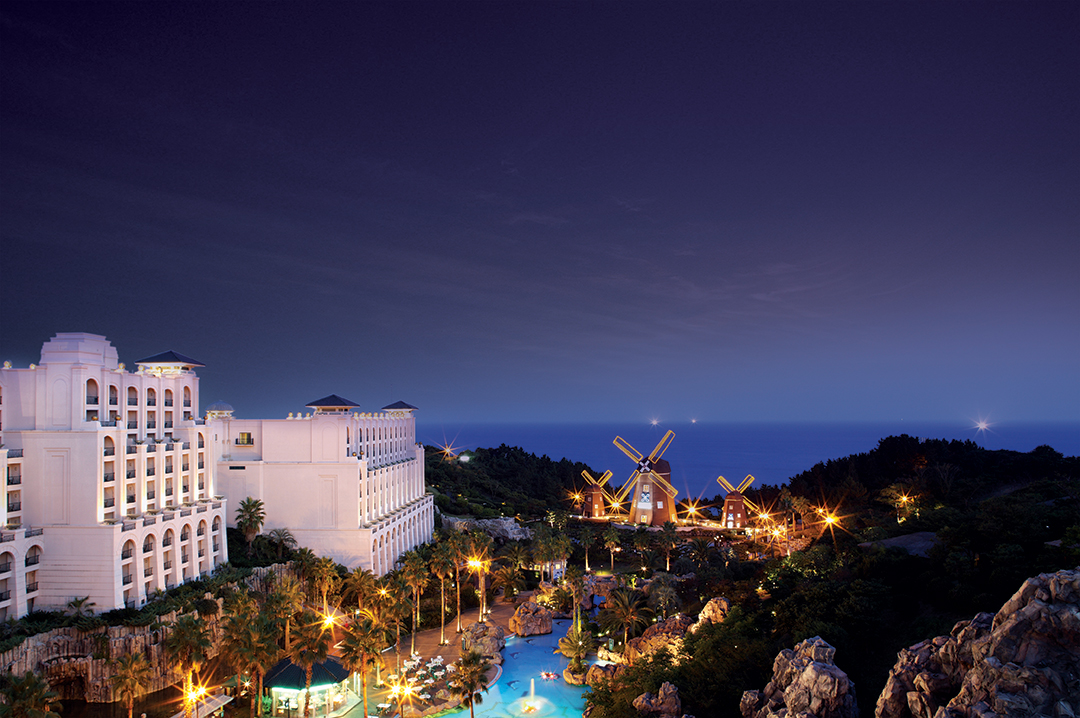 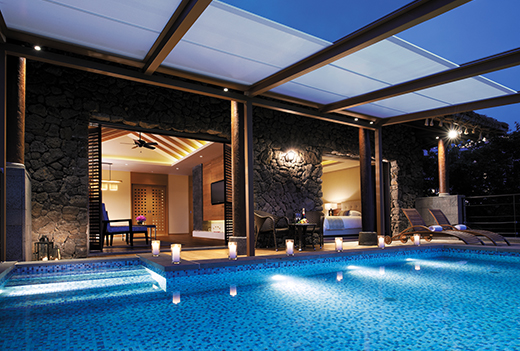 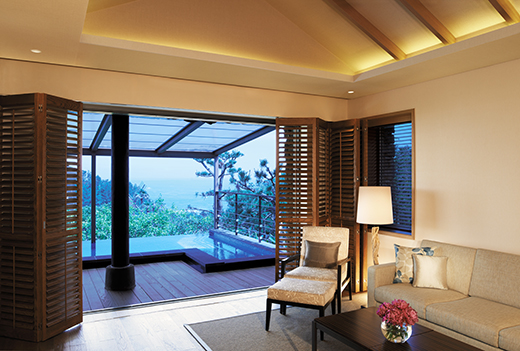 Where to Stay in Jeju: LOTTE HOTEL JEJU
About an hour and a half away from Yongnuni Oreum by car is LOTTE HOTEL JEJU. Equipped with 500 rooms, the resort hotel was designed after “The Palace of the Lost City” in South Africa and is in perfect sync with the magnificent natural surroundings of Jeju Island. The hotel offers an extensive array of dining options at its lounge and four restaurants, each specializing in Korean, Japanese, Chinese, and Western cuisine using the top-quality ingredients handpicked by experienced chefs. Various facilities including the all-season spa pools make LOTTE HOTEL JEJU the best choice for relaxation after enjoying the island of Jeju.
Address 35 Jungmungwangwang-ro 72beon-gil, Seogwipo-si, Jeju
Phone +82-64-731-1000
Homepage www.lottehotel.com/jeju-hotel