[INSIDER GUIDE] Hidden Charms of Sokcho Presented by Donga Bookstore Owner
Kim Young-geon runs a bookstore that has been a family business owned by his grandfather and father and has in-depth knowledge on the history of Sokcho where the bookstore is based. From a town of displaced civilians to a tourist city, Kim has witnessed first-hand the transformation that the coastal city has experienced. We asked him about some lesser-known charms of Sokcho.
“Sokcho is currently going through a rapid transformation, from a displaced community to a trendy tourist center. Among its tourist spots, those that have cherished and remembered the bygone era of Sokcho are garnering popularity these days.”
Kim Young-geon, Donga Bookstore Owner 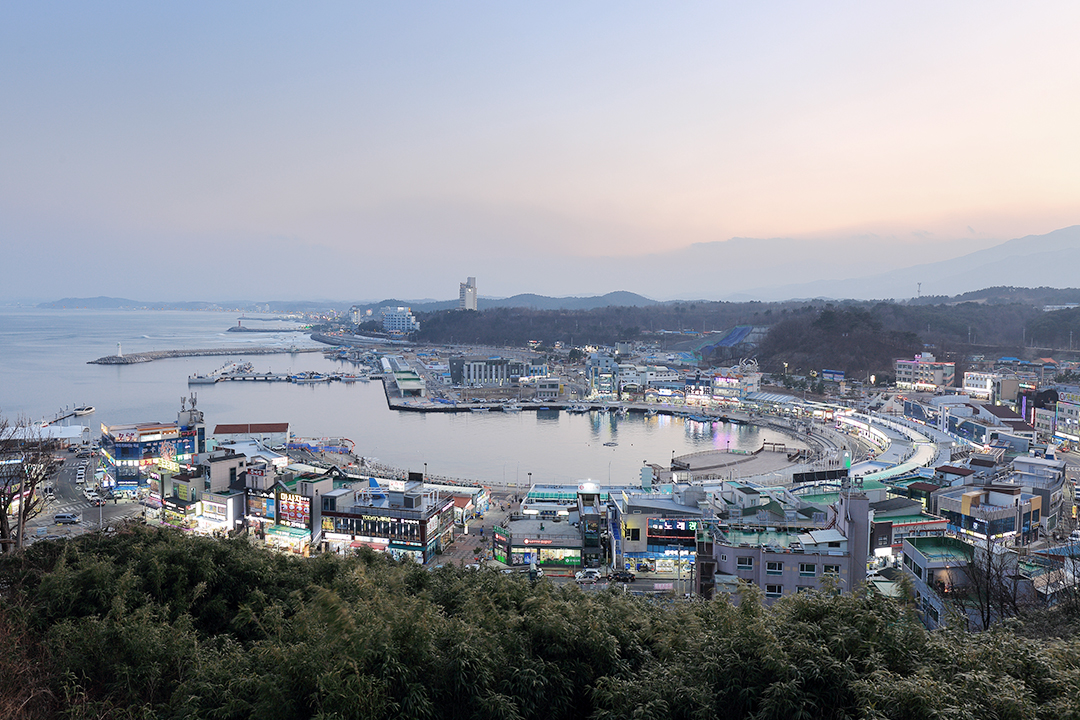 Your favorite course for a stroll?
‘Yeongnangho Lake’ is one of the two lakes that represent Sokcho. It’s quiet and beautiful there and is perfect for a stroll. It’s a place that gives me inspiration.
Address Jangsa-dong, Sokcho-si, Gangwon Province
Best place to take a breather?
I often go to ‘Hagmujeong,’ a pavilion located in a dense pine grove. It’s a good idea to also check out Sangdomun Hanok Village nearby.
Address Domun-dong, Sokcho-si, Gangwon Province 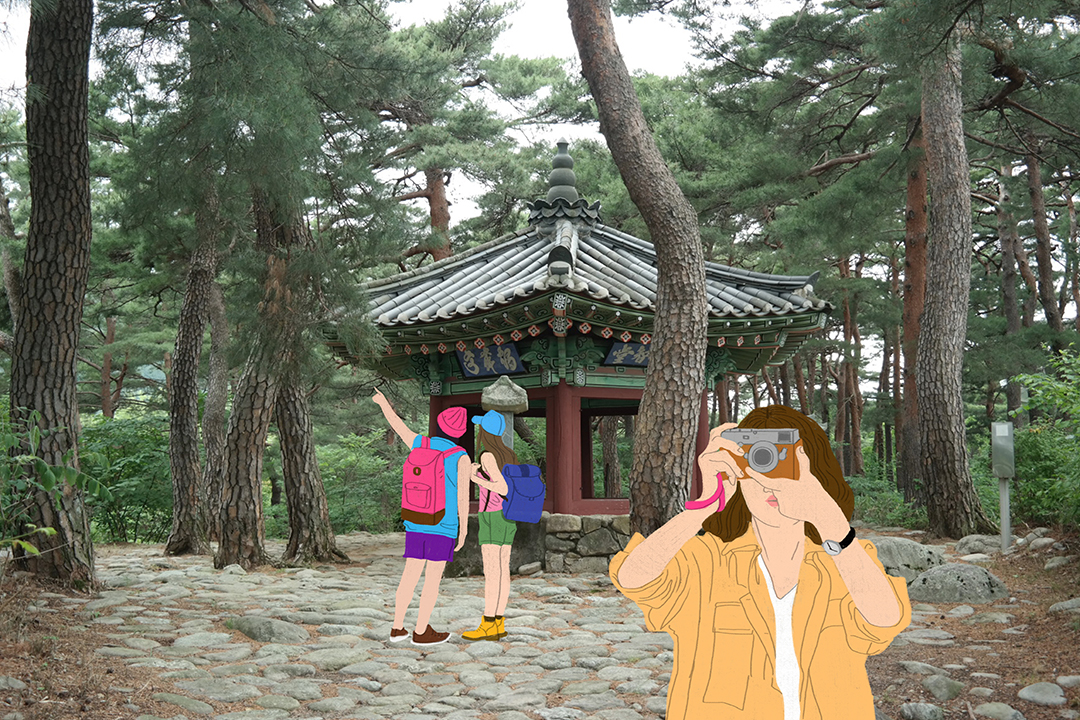 Favorite restaurant?
I like to eat at ‘Wan&Song’ House Restaurant. It has a garden and is run by a couple who relocated to Sokcho several years ago. Vietnamese pho is popular.
Address 632-250 Jangsa-dong, Sokcho-si, Gangwon Province
Phone +82-33-635-3437
Best bar to spend a night?
I recommend ‘Yuramseon Yasik,’ specializing in late-night snacks near Dongmyeonghang Port. You can enjoy the atmosphere of the harbor, along with tasty dishes served with drinks. Seasoned red crabs, freshwater snails, and grilled sole are customer favorites.
Address 215 Seorakgeumgangdaegyo-ro, Sokcho-si, Gangwon Province
Phone +82-33-632-9086
Favorite café?
‘Chilsung Boatyard Salon’ is a one-of-a-kind place created by repurposing an old boatyard in Sokcho into a museum and a café. You get an unobstructed view of Cheongchoho Lake from the coffee shop.
Address 45, Jungang-ro 46 beon-gil, Sokcho-si, Gangwon Province
Phone +82-33-633-2309
Instagram www.instagram.com/chilsungboatyard 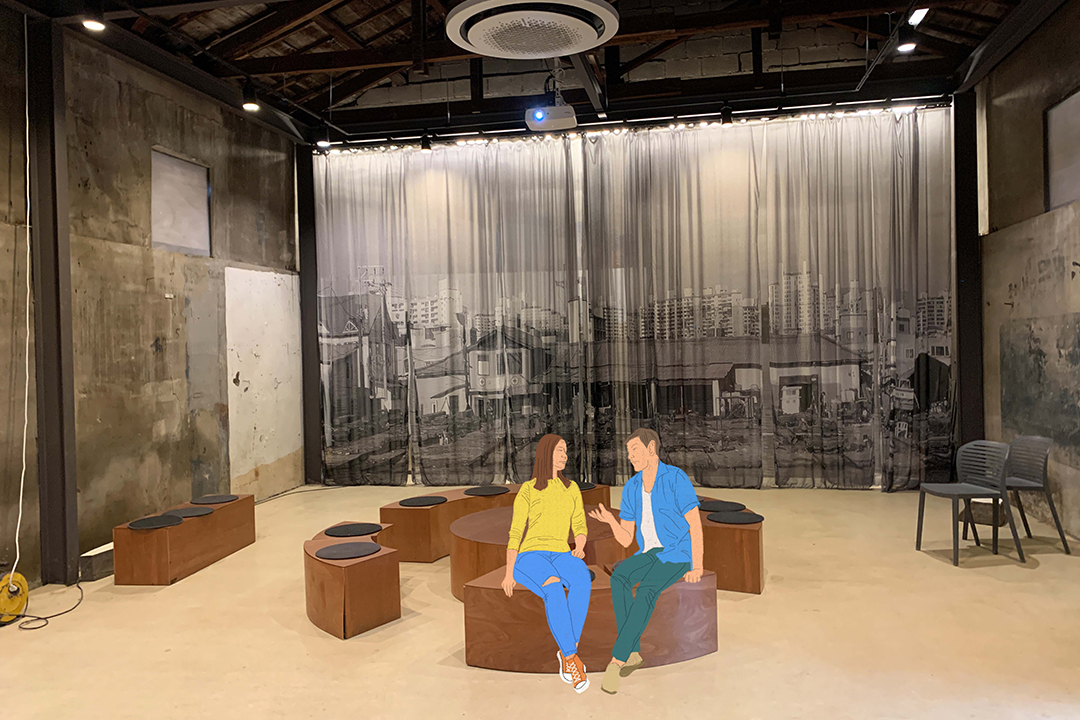 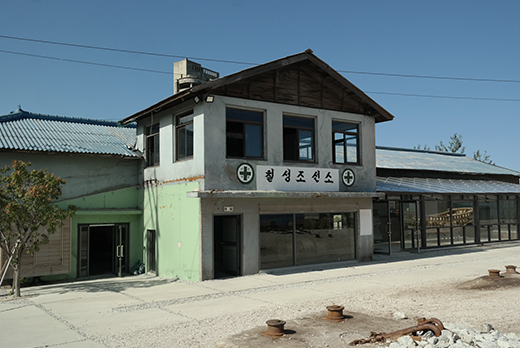 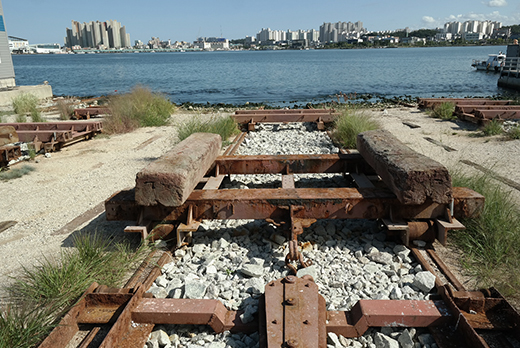 You can still see traces of an old shipbuilding yard. © Kim Young-geon

A must-see place?
‘Dongmyeongdong Catholic Church’ is a historic architecture approved and built during the Korean War. It is also known as a great spot to watch the sunrise.
Address 10-5 Yeongnang-ro 7-gil, Sokcho-si, Gangwon Province
Phone +82-33-632-3088 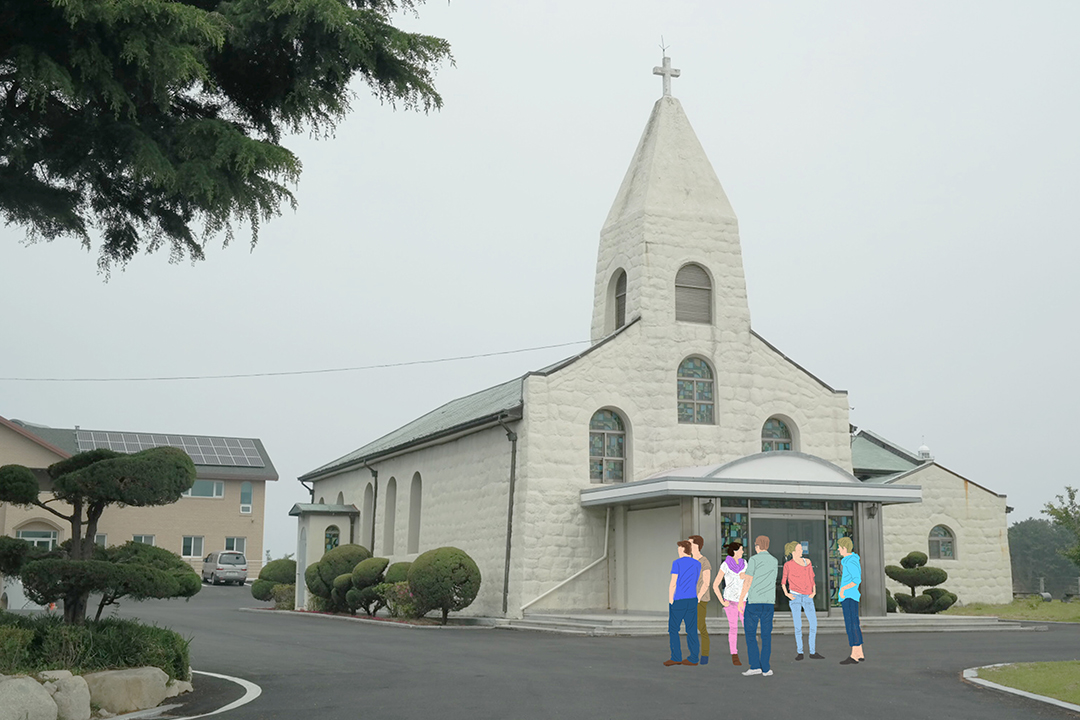 A must-eat delicacy?
‘Gajami Sikhae’ is fermented flounder prepared with rice instead of salt. It’s part of a unique food culture found in Gangwon Province and Hamgyeong Province in the north. It’s a must-eat delicacy if you visit Sokcho.
A hidden gem for tourists?
‘Bogwang Mini Golf’ opened in the 1960s. The place offers setups to enjoy a ‘minigolf’ game, found nowhere else in the world.
Address 69-4, Yeongnanghoban-gil, Sokcho-si, Gangwon Province
Phone +82-33-633-3110 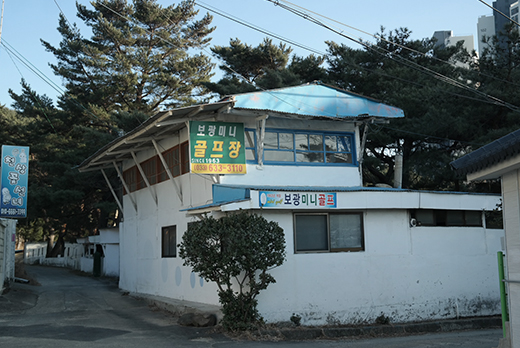 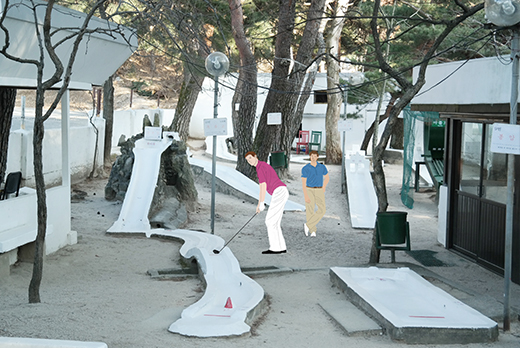 Sokcho’s signature scenery?
The most iconic view Sokcho provides would be the one from the Lighthouse Observatory. Serving both as a lighthouse and an observatory, the structure built on a rocky hill provides a panoramic view of the East Sea, the city of Sokcho, and even Mt. Seorak.
Address 8-28 Yeonggeumjeong-ro 5-gil, Sokcho-si, Gangwon Province
Phone +82-33-633-3406 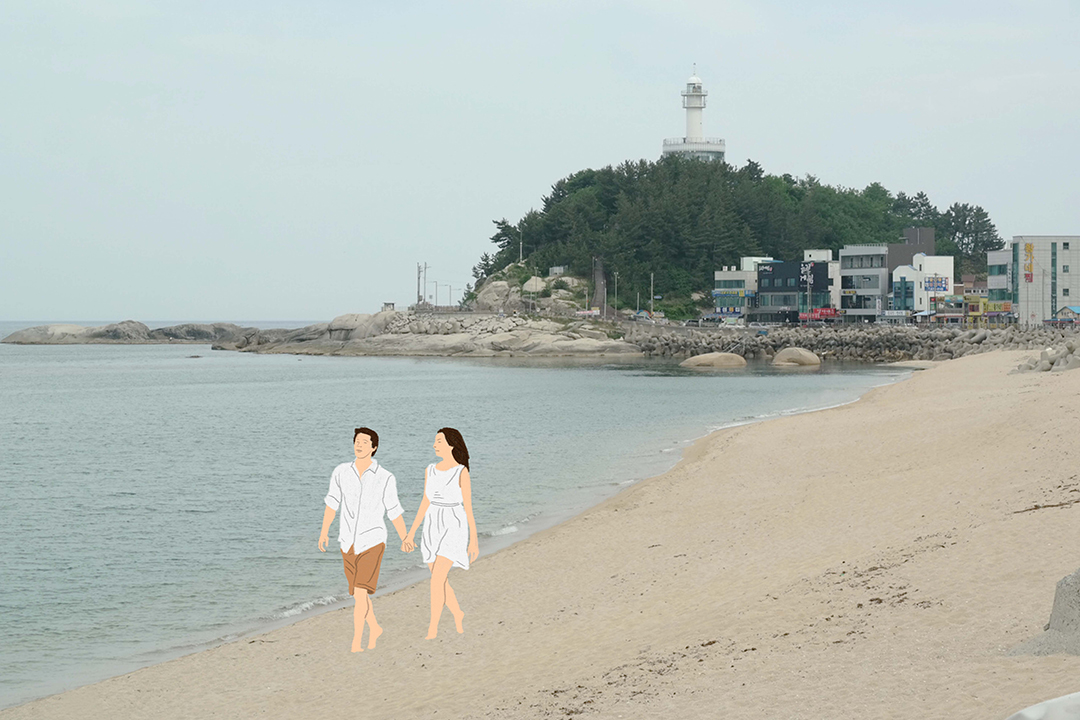 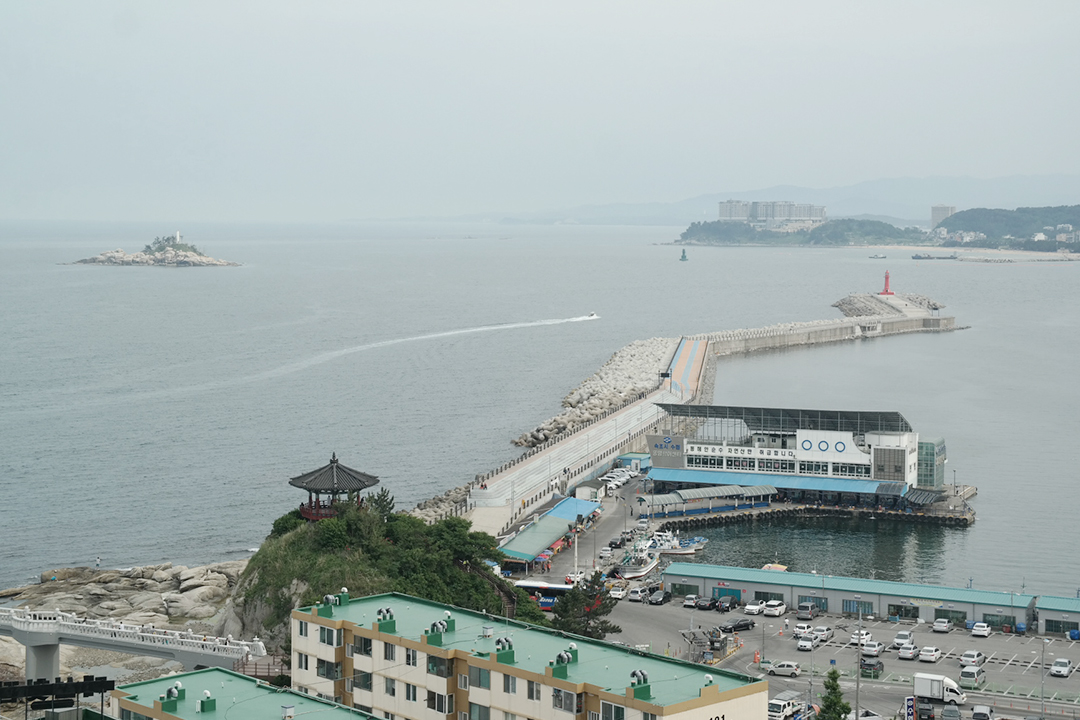 About Insider: Kim Young-geon, Bookstore Owner in Love With Sokcho
If someone is looking for a tour guide who knows Sokcho very well, we would recommend Kim Young-geon without hesitation. He would be the best choice thanks to over 20 years he’s spent in the port city. I also have faith in his kind and careful personality that can be felt through the curated books on display at Donga Bookstore. (In fact, he produces content delivering the value of Sokcho and its surrounding areas.) Since 2015, Kim has been carrying on the third-generation family business, Donga Bookstore, after his father. It’s on many tourists’ must-visit destination list for a Sokcho trip. Not just local customers, but travelers who are curious about the decades-old bookstore in this digital era would visit the bookstore. 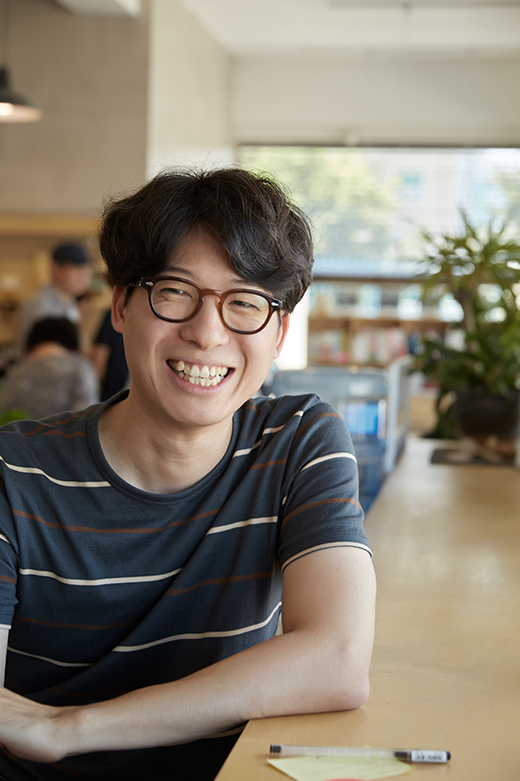 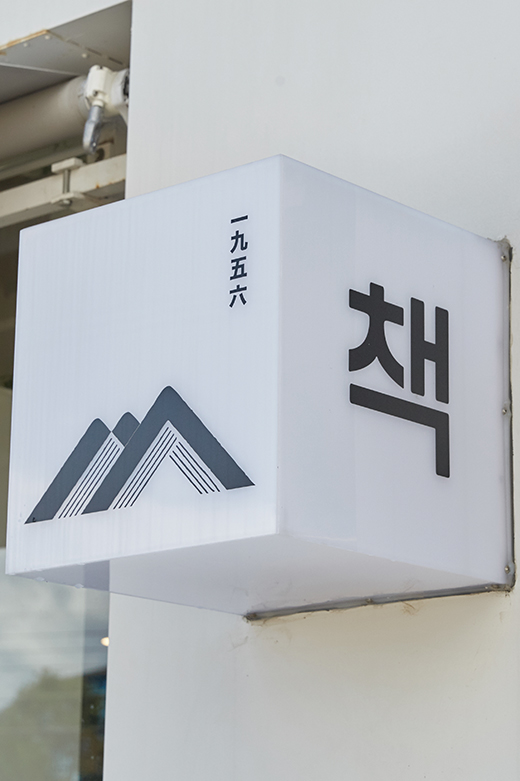 Q. First of all, tell us about Donga Bookstore.
A. My grandfather started the business in 1956. Its title was ‘Donga Stationeries’ back then, selling mostly stationery items and partially books. In the 1960s, the store changed its name to Donga Bookstore and got into the book business in earnest. In the mid-1970s, my father took over the operation from my grandfather. The business saw many ups and downs over the period of over 40 years. I joined the work in 2015 and, with the help of my father, overhauled the bookstore. As of now, we are maintaining our identity as a general bookstore while also investing in creating content highlighting the value of local bookstores and our city.

Q. What are your main customers like?
A. For about 60 years since the opening, we mostly served the local community, but in 2016 we started noticing a change in our customer demographics. Tourists began coming to our bookstore. It was a time when other local book businesses were also drawing attention from outsiders. I think Donga Bookstore received more generous treatment than other independent shops due to the fact that we run a third-generation family business inheriting the identity of our predecessor. Currently the ratio of tourist customers is slightly higher than that of Sokcho citizens.

Q. What do you prioritize when curating and displaying books?
A. To just pick one, the answer would be ‘balance.’ It is because our customers are from various social strata including age, gender, and occupation, but also because Donga Bookstore believes that a bookstore must accommodate people regardless of their backgrounds. We try to introduce a well-balanced collection by taking into account the interests of local visitors, tourists, and children. 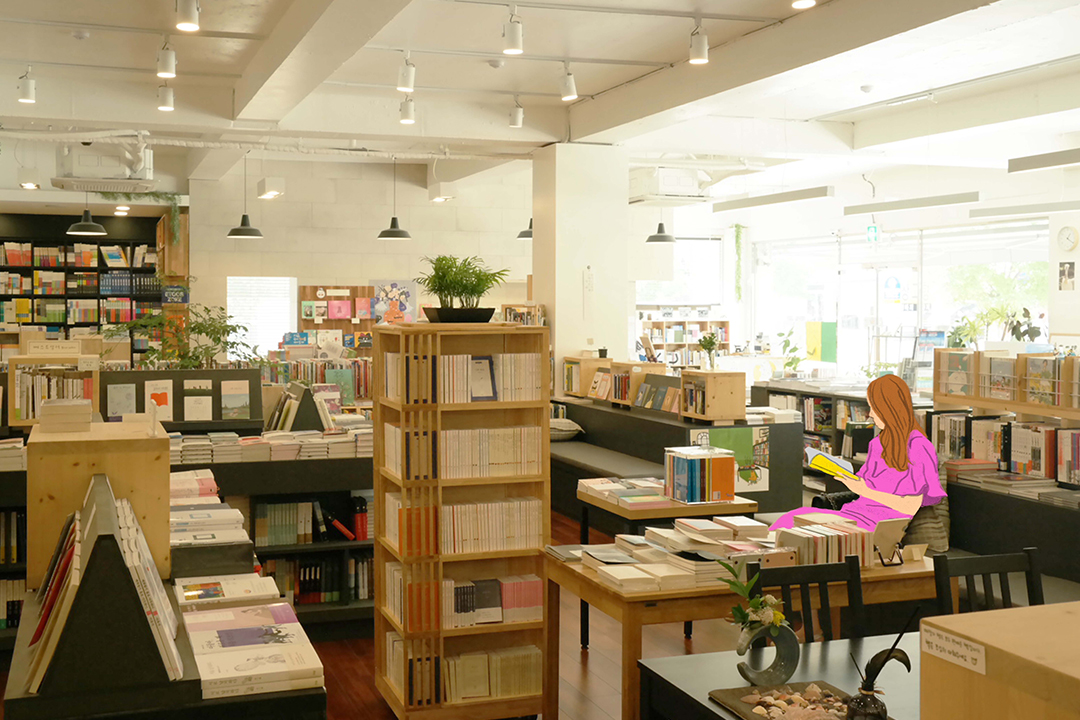 Q. We would like to know what you think of Sokcho as a city.
A. Sokcho is currently going through a rapid transformation, from a displaced community to a trendy tourist center. It’s a town started by those who had relocated to this area close to the border between the two Koreas, after losing their homes during the Korean War. They engaged in fishing for livelihood during the early settlement days, which explains why there are many cultural traces of displacement and fisheries. With the demise of fishing and the advancement of modern transportation, Sokcho has been rebranded as a trendy tourist city. Among its tourist spots, those that have cherished and remembered the bygone era of Sokcho are garnering popularity these days.

Q. Is Sokcho that different from the one in your childhood memories?
A. When I was little, Sokcho wasn’t a full-on tourist destination. Tourists were mostly summer vacationers and hikers that have come for Mt. Seorak. The city itself was deemed a small, cozy town relying on the fishing industry. The market(Sokcho Tourist & Fishery Market) is a direct example that shows the city’s transformation. In my childhood, the market was where locals went grocery shopping. Today, it’s where tourists go to enjoy local delicacies.

Q. You’ve written a book titled “Sokcho.” What was your approach to the city in your book?
A. “Sokcho” is the first book in the ‘Korea Docent’ series by publisher 21cbook. Each volume is dedicated to a city. I have a hope that “Sokcho” will be viewed as neither a heavy history book nor a light tourist guide. Sokcho is a small city with a short history but it should not be underestimated. For example, Daepohang Port was a crucial place in Korea’s independent movement in the early 20th century. For the composition of the book, I tried to select the places that are historically relevant and also those that are contemporary. If a chapter discussed the meaning of a space, then the next chapter would deliver the stories of Sokcho natives. I wanted my readers to have a chance to dynamically experience the space, people, history and present of Sokcho. 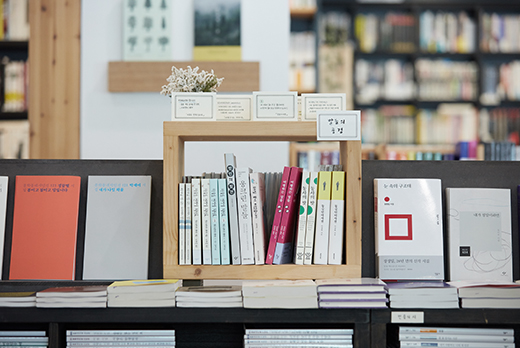 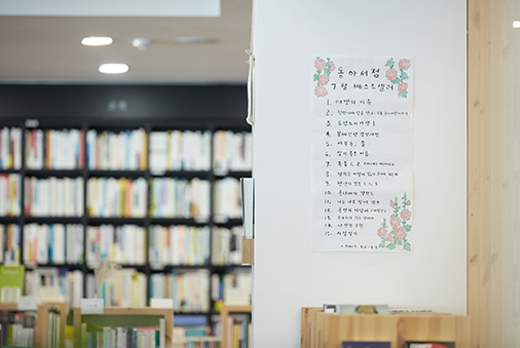 Q. Is there a way for tourists to enjoy Sokcho more fully?
A. As with any other cities, spaces, or venues, there are ‘stories’ begotten by the people who have stayed or currently live there. A big gap exists between traveling with the knowledge of those stories and traveling without it. When you travel, you will commonly pass a pavilion, a rock, or an old building. If you know the stories behind these seemingly-ordinary structures or objects, your trip will be that much richer. That’s why I urge those who want to travel Sokcho properly to visit Sokcho Museum first. The place features the history of Sokcho chronologically, from prehistoric times to the modern age.

Q. We’d like to know your plans for the future. What do you want to accomplish through Donga Bookstore?
A. Next year marks the 65th anniversary of Donga Bookstore. We’ve received undeservingly much love, so we are considering ways to return it to our customers. In addition, we are making an illustrated book listing the marine products of Sokcho. It will likely be ready for release as early as this year. We don’t have big plans but hope to stay diligent in keeping the business open everyday like any other self-employed folks.