Globetrotting in Seoul
Instead of getting on a plane with a suitcase and a travel guide, how about putting on your favorite sneakers and stepping outside? Here’s a map for an affordable world tour in the city of Seoul.
We planned this trip because we were not allowed to buy a plane ticket and head overseas yet. Our itinerary involves small towns in Seoul that are well-known as expat communities for international residents in Korea. What goes around comes around. All of these places have already been in the limelight once as a hip, trendy hangout venue, but we figured why not tour them again when there are not many viable travel options anyway? With densely-built houses, apartment complexes, and shopping areas, they are not different from an ordinary Seoul town. Or, so it seems. If you are up for exploring, you can travel to France or Japan here in the Korean capital. No need to drag back home a heavy backpack containing souvenirs as a proof of the trip, or worry about miscommunication due to an unfamiliar language environment. What a simple way of globetrotting, isn’t it? Just by taking a stroll around these exotic neighborhoods and watching people live a daily life in peace, you will feel relaxed and refreshed. 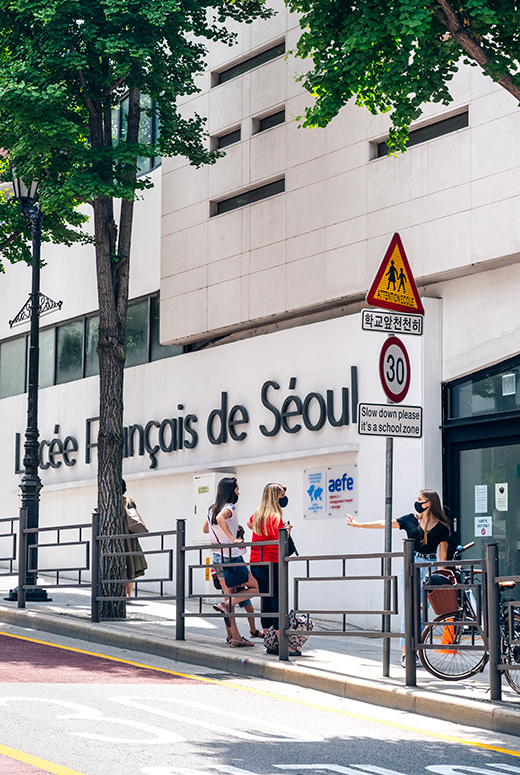 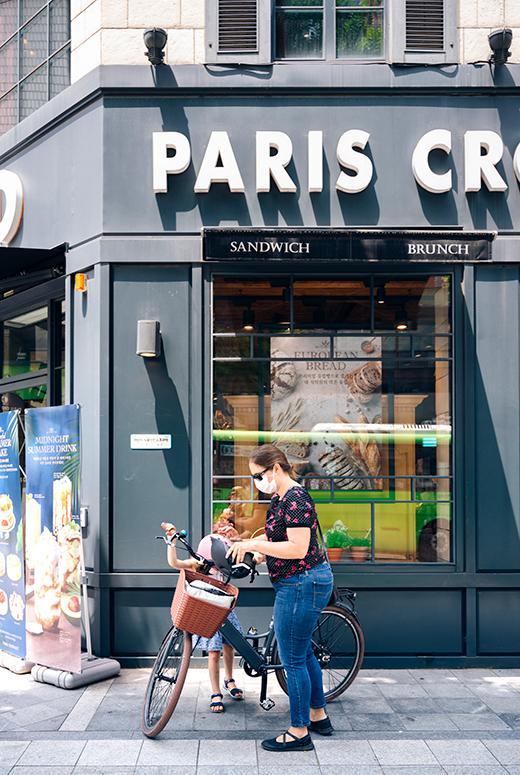 Bonjour, Little France! Seorae Village
Seorae Village is called ‘French Town’ or ‘Little France in Seoul.’ There is a large population of French nationals in the village. The influx of these European expatriates began in 1985 when the French School of Seoul, a symbolic local institution, relocated to Seorae Village. Currently, about half of French nationals in Korea live in this Seocho-gu town. A quick glimpse of the area does not give too many clues as to its international residents. However, in the mornings and evenings when kids walk to and from school, the town presents a different scene. You will see foreigners heading home with a baguette from a bakery at the town entrance, walking their kids to school, picking them up on a bicycle, or going for a walk along the Han River. Their presence on the streets of Seorae Village instantly gives the town a strong, exotic vibe. In the daytime when kids are at school and parents at work, it doesn’t feel as special. We recommend visiting Seorae Village in the morning or evening if possible. 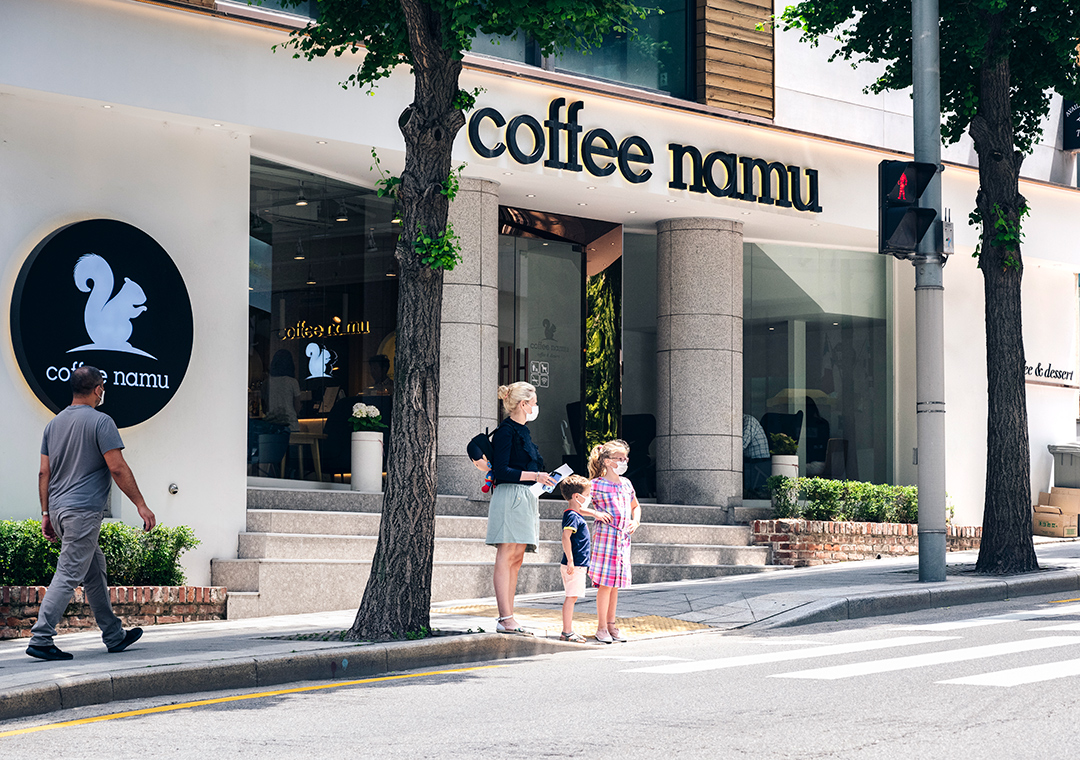 Seorae Village in the morning as students head to school

“Many people get disappointed after visiting Seorae Village because they thought it would be a French town like its nickname says. First-time visitors tend to focus more on the outward appearance. When we came here to look for a place to live, we also thought it wasn’t that ‘French.’ When we visited Seorae Village again after seeing other areas, we checked out a shop space and the French school vicinity. That’s when we realized its unique atmosphere.” Owner-patissier Kim Su-jin at French dessert shop ‘Maillet’ told us her experience when we asked about ‘Little France in Seoul.’ 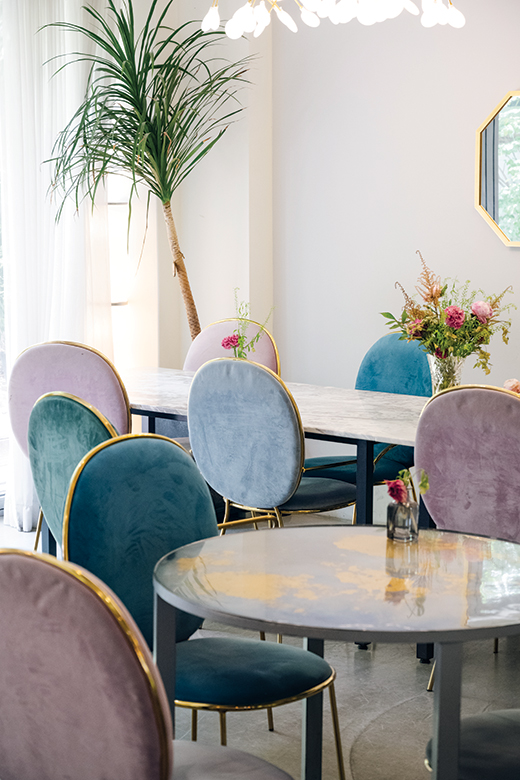 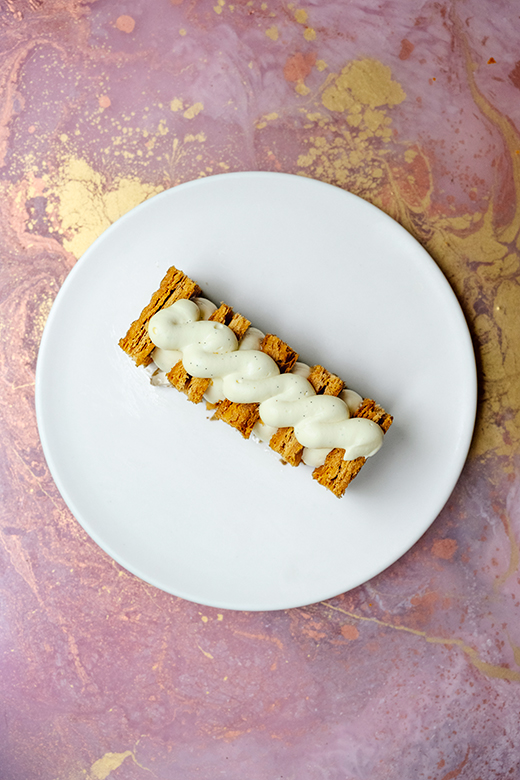 Kim runs classic French dessert shop ‘Maillet’ with her husband and pastry chef Ronan Maillet who came from France. The couple opened their first shop in Gyeongridan-gil, Itaewon in 2014 before the dessert market boomed in Korea and relocated to the current spot in August 2016. One of the reasons they picked Seorae Village for their second location was the fact that it had an established French community. Maillet sells French-style dessert pastries such as macarons, financiers, and cakes. ‘Tarte vanille’ is a vanilla-flavored rectangular tart with a thick vanilla cream on top. ‘Mille feuille vanille’ can be easily cut into a bite size. These are the top two dessert items at the patisserie. If you plan to visit Seorae Village for a French-inspired day, make sure you visit Maillet. Some of the shop regulars visit the town just to taste Maillet’s delectable pastries. 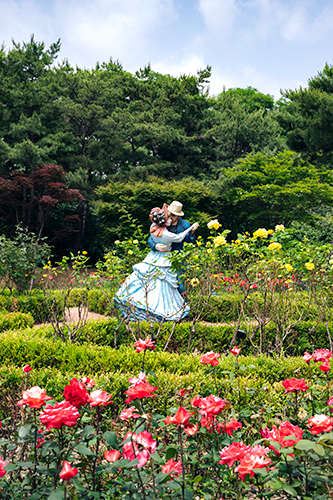 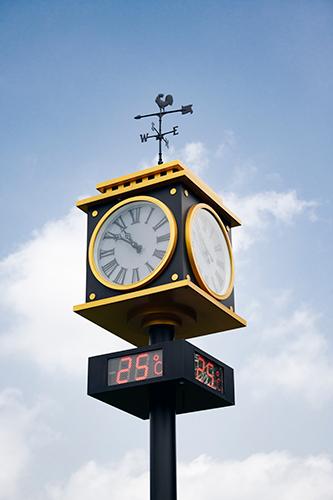 Watchtower at the center of Montmartre Park 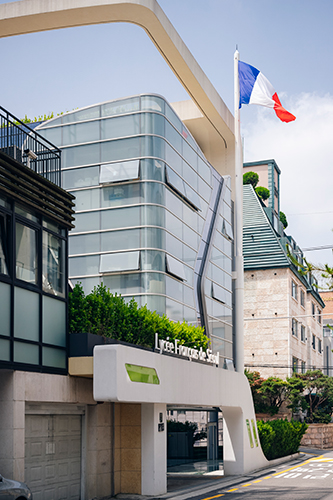 Seorae Village visitors can also enjoy an exotic atmosphere at ‘Montmartre Park’ and ‘Cheongryong Playground.’ Montmartre Park was originally a wild forest with densely-populated acacia trees. It was developed into a public park later in 2000. The name of the park alludes to the fact that it is near Seorae Village, a French enclave. As a matter of fact, the park is frequently used by the villagers throughout the week. They would take a walk or exercise early in the morning or on weekends. At Cheongryong Playground, you can often see children of different ethnicities play together. One of the most popular events at Seorae Village is the traditional French market opening during Christmas holidays. You can buy various groceries and food at ‘Christmas Market.’ 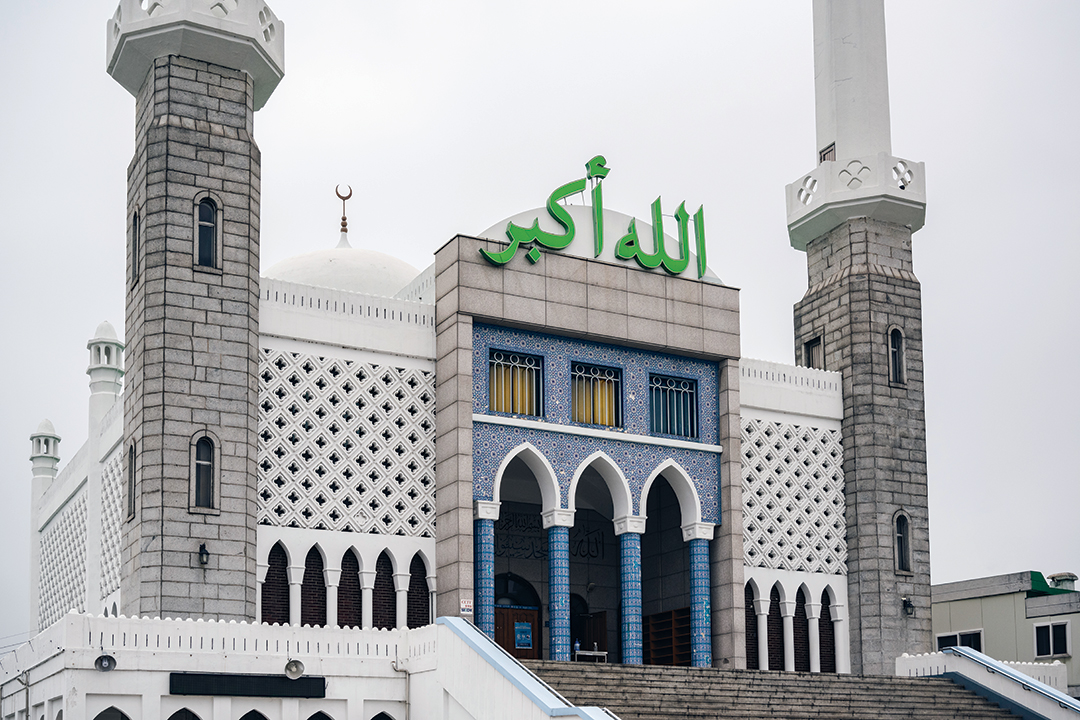 Mosque on Itaewon Hill
For those who are interested in history or religion, this place will definitely be worth checking out. As a venue of the annual Global Village Festival, Itaewon is the most iconic multi-cultural town in Seoul. About half way up the Itaewon hill sits a mosque where you can experience Islamic culture. Take subway line No. 6 to Itaewon Station, get out exit No. 3, and follow Usadan-ro. As you near the mosque, you will see more and more signboards using Arabic language. Then, you will soon find the Seoul Central Mosque, a massive architecture with a round dome and tall minarets that you have probably seen on Islam-themed photos or videos. Built in 1976, the Seoul Central Mosque is the first of its kind in Korea and the only one in Seoul. The Korean government offered the land as a gesture of goodwill and Muslim countries including Saudi Arabia paid for building costs. 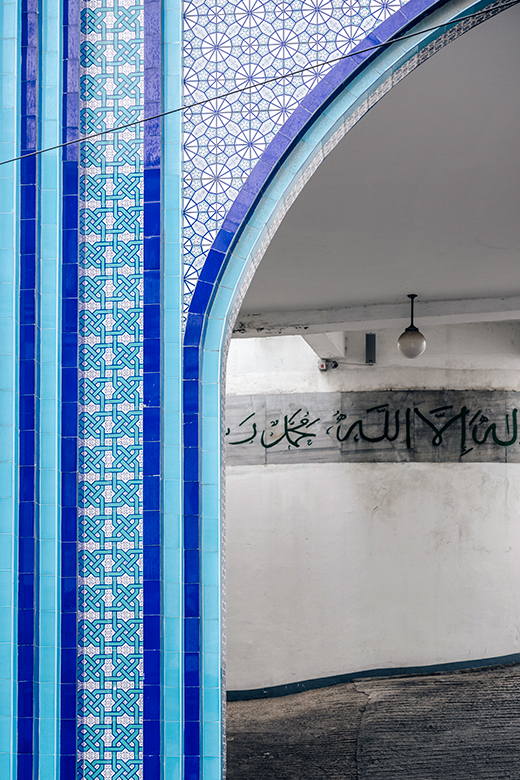 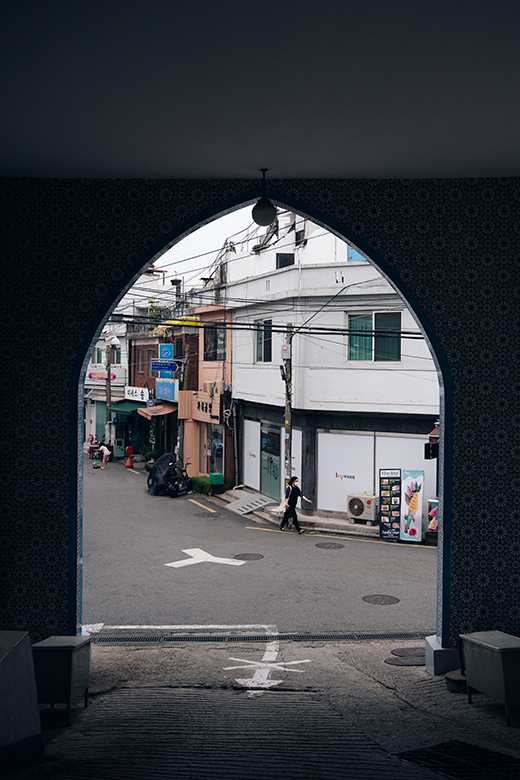 View beyond the entrance to Seoul Central Mosque

The Seoul Central Mosque has a space for lectures and meetings, prayer rooms, commercial areas, and the Islam Center where a school for Muslim children is located. The whole mosque is open to the public and you can watch the service on the spot. It is important to remember to dress properly before visiting the mosque. If you are wearing short pants or sleeveless shirts, you will be required to cover your exposed body with the clothes provided by the mosque. To see the interior of the house of worship, an extra form needs to be filled out. (Visiting is restricted currently due to the Coronavirus pandemic). The Seoul Central Mosque is essentially where people have a religious service. It needs to be kept quiet and clean all the time. Walking leisurely around the blue-tiled, white-walled building will somehow make you feel peaceful. 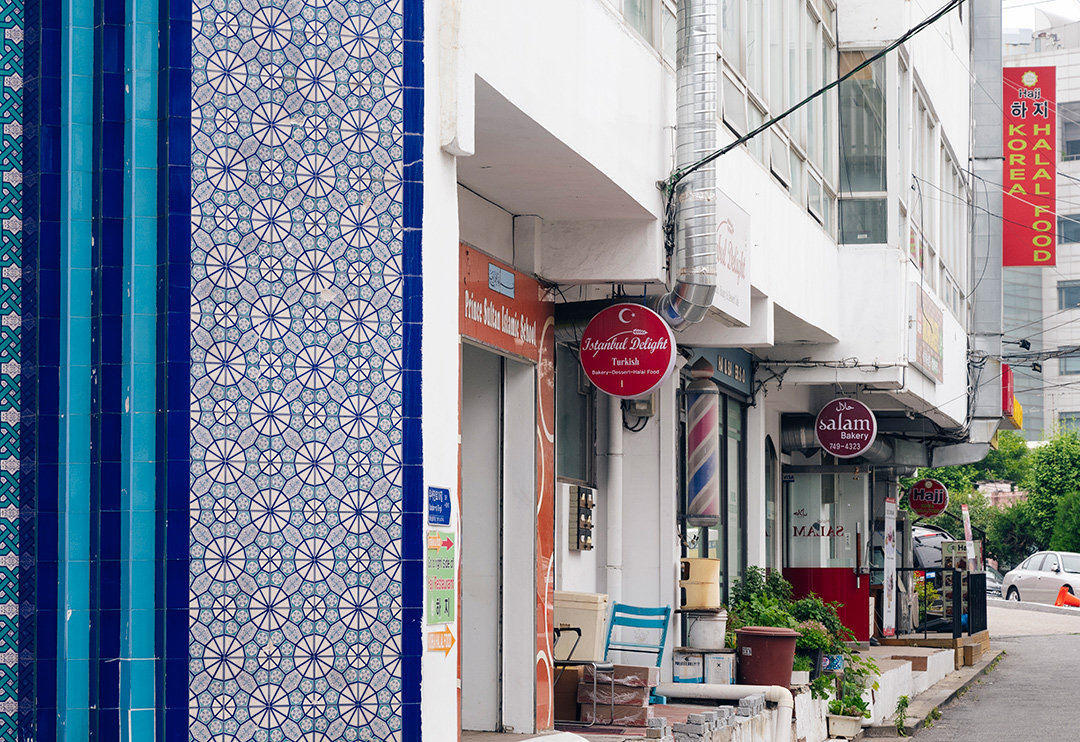 Shops on the first floor at Seoul Central Mosque 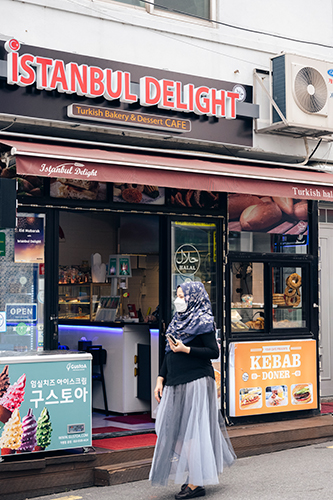 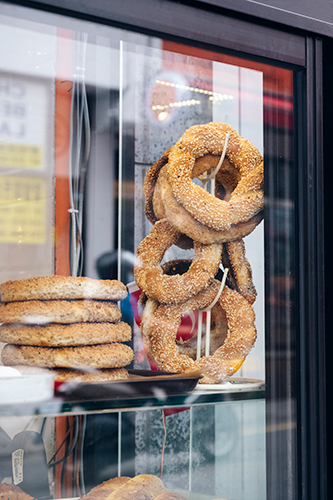 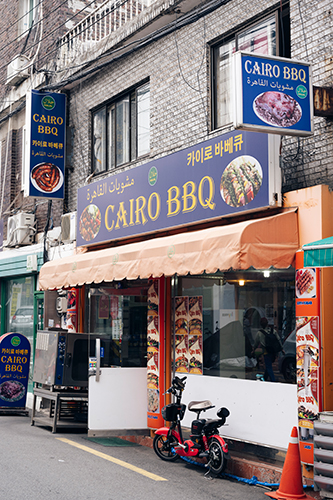 Around the Seoul Central Mosque, there are quite a few Halal supermarkets and restaurants. Just five years ago, Usadan-ro 10-gil was lined with unique craft shops and studios run by young artists. It was considered a hip, trendy street, along with Gyeongridan-gil in Itaewon. Recently the area is much more subdued, but the atmosphere is still exotic thanks to the remaining craft shops and pedestrians of ethnic diversity. In April, Seoul’s Yongsan-gu Office announced a plan to turn the Itaewon mosque neighborhood into the Itaewon Halal Food Culture Street. We’ll have to wait and see as the plan unfolds. One thing that’s certain is the fact that the Seoul Central Mosque and its surrounding area will be revitalized as a space for Korea’s Muslim community and of cultural exchanges between various ethnicities. 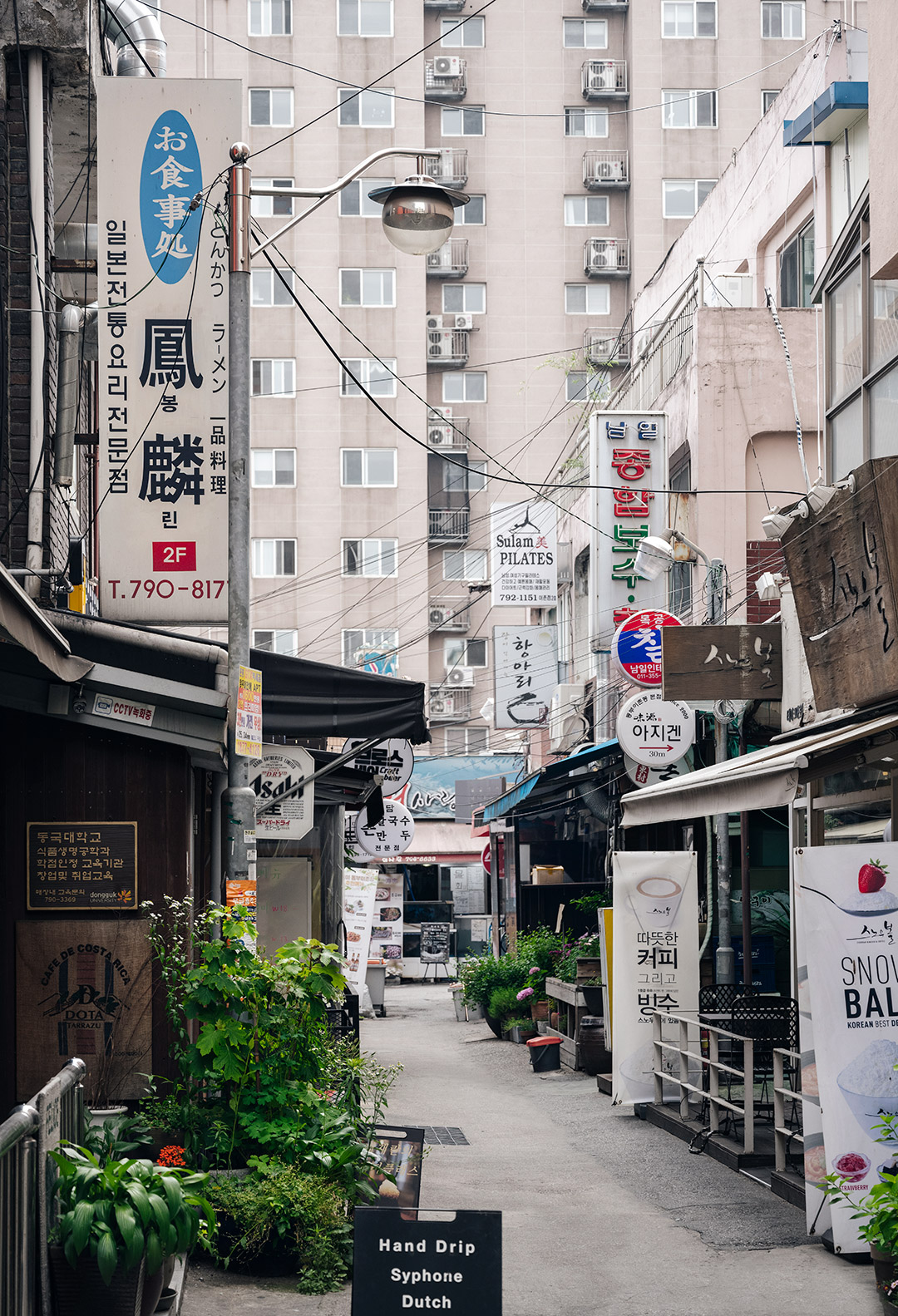 Aura of Japan Town in Dongbu Ichon-dong
Exit No. 4 of subway line No. 4 Ichon Station in Dongbu Ichon(Ichon1)-dong, Yongsan-gu, marks the demarcation of ‘Little Tokyo’ or ‘Japan Town.’ The history of the Japanese enclave goes back to 1965 when Korea and Japan normalized their diplomatic relationship. The number of Japanese nationals in Korea started going up since the normalization. Many of them settled in Hangang Mansion, an apartment complex in Dongbu Ichon-dong built in 1971 to accommodate Korea’s middle-class homebuyers. At the time, the Japanese School in Seoul opened in Gaepo-dong, Gangnam-gu, while the Japanese embassy and major Japanese companies’ Korean offices were located north of the Han River. It made the Dongbu Ichon-dong location prime for families with children. With the influx of Japanese population, the neighborhood saw an increase in restaurants, stores, and convenience facilities tailored to the needs of Japanese nationals.
However, it is hard to see Japanese people on the streets of Ichon-dong nowadays. Many people moved to Sangam-dong in western Seoul as the Japanese School in Seoul relocated there. The number of Japanese workers dispatched to Korea with their families decreased as well. Shops owned by Japanese nationals became fewer and fewer. The question of whether Japan Town in Dongbu Ichon-dong is where most Japanese in Seoul lived can’t be answered with a definitive yes. It is, nonetheless, the most Japanese-style neighborhood in Seoul. There are some remaining small buildings using both Korean and Japanese signboards that indicate you are in ‘Japan Town.’ 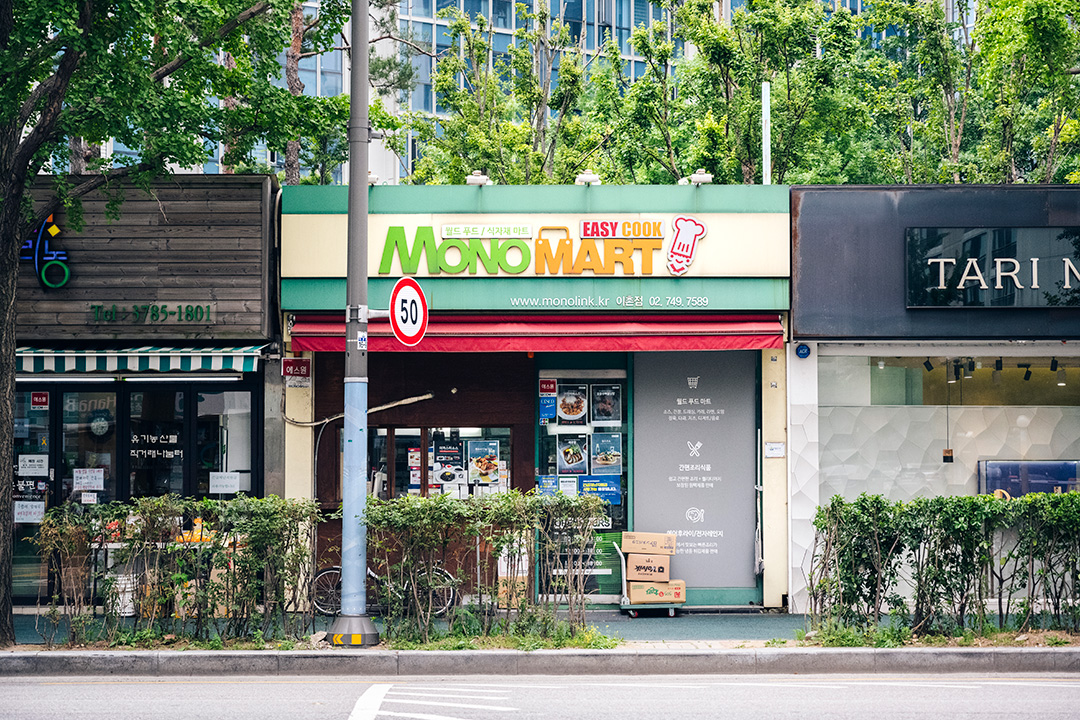 “We have lived in Dongbu Ichon-dong for a long time. My husband used to be a Japanese worker,” said Park Young-ran of ‘Suzuranatei.’ It’s one of the few Japanese home-style restaurants left in the town. Suzuran(lily of the valley flower in Japanese) is drawn on the restaurant's signboard. Heading downstairs, you will find a Japanese menu, dimmed lights, and dark brown tables that create a sensation you are standing in an old Japanese diner. Kim and her husband, Masaki Mitani, who came to Korea as a freezer engineer from a trading company in Japan, run the restaurant together. Instead of returning to his homeland, the couple opened a grocery distribution shop in Dongbu Ichon-dong in the late 1990s. After their business hours, they used to make simple meals for Japanese workers who lived alone to help the fellow Japanese feel less lonely. A word of mouth that their food was delicious soon got around and what was once a distribution shop became a restaurant. 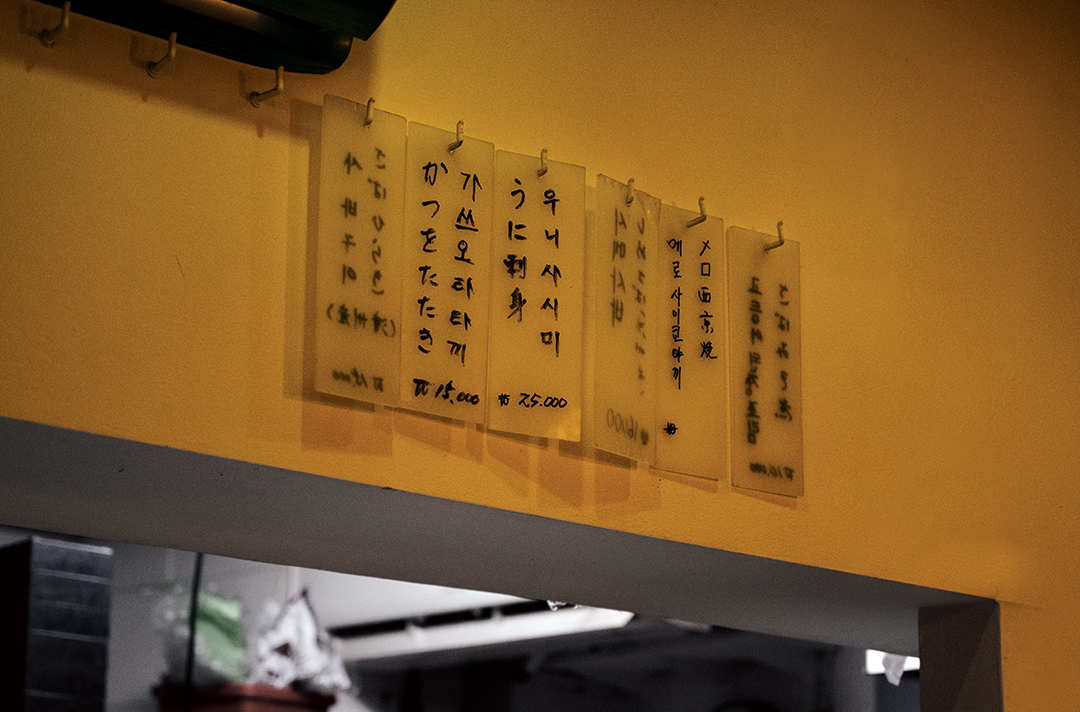 Inside Suzurantei, with the menu in both Korean and Japanese. 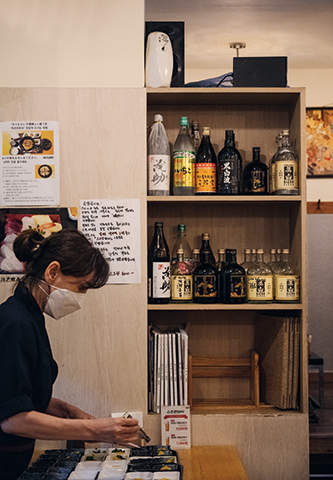 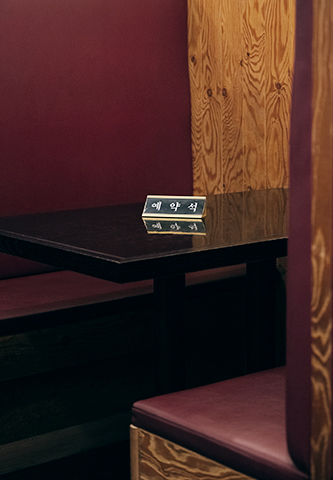 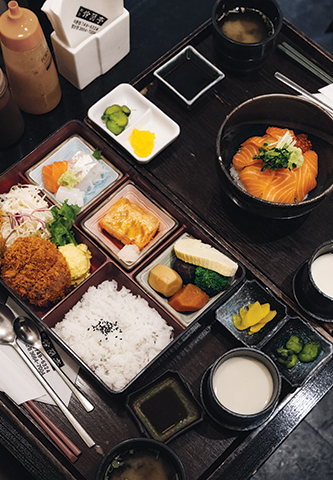 They started serving food, thinking they were treating their friends, and the place suddenly became a popular Japanese home-cooking restaurant, without a sign in the beginning. Two decades ago, 80 percent of their customers were Japanese. With the dwindling Japanese population, they are seeing fewer Japanese customers as well. Instead, more Koreans are coming to the place for their diverse menu that includes bento meals, don katsu, curry, udon, rice with toppings, fries, croquettes, and grilled fish. The recipes have not been changed since the opening. “We have regulars who have trusted us with our food. We take effort to keep the flavors unchanged. It’s why we can’t take off our aprons yet.” It seems like the changes happening in the neighborhood wouldn’t affect Suzurantei for the time being. It also means you can always count on having a nice Japanese home-style meal in Dongbu Ichon-dong. 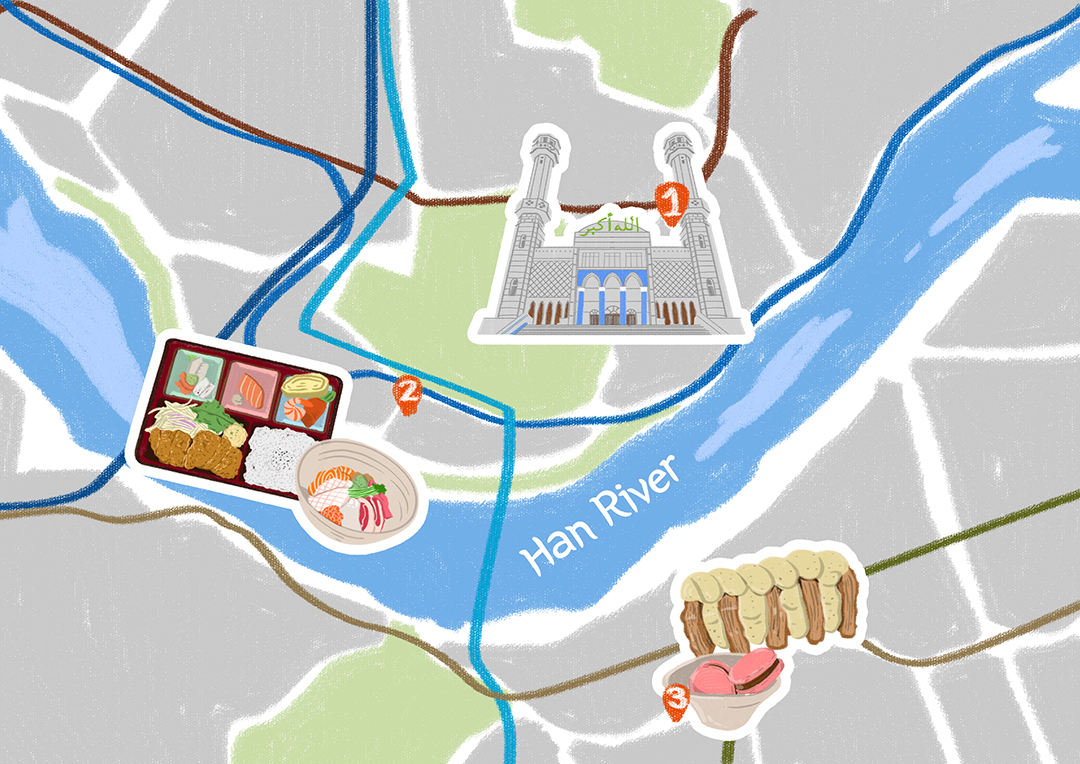