Haeundae and Seomyeon, Heart of Busan
Busan, the second-largest city in Korea, is a popular tourist destination, thanks to its beautiful beaches and scenery. Haeundae and Seomyeon are the two areas that have built Busan into such a famous tourist site. Let’s dive into the history of these two districts and find out what makes them so popular.
There were times when you couldn’t go wrong with movies filmed in Busan. It began with some 20 years ago, followed by , , , and . They may not all have been set in Busan but they were at least shot in the city. And they enjoyed box office success.
Haeundae and Seomyeon, Special Even for Locals
Even if you look past the city’s cinematic tradition, Busan is a special city. It’s the second-largest city in Korea, behind only in Seoul. With its spectacular beaches, Busan is a major tourist destination. Haeundae and Seomyeon are the two biggest attractions within Busan. Jagalchi Market, Gwangbok-dong and Bosu-dong are also populated spots, but visitors mostly pass by those areas rather than spend the night. The vast majority of tourists will unpack in either Seomyeon or Haeundae and then hit the road.
As of March 2020, Busan has a population of about 3.46 million. That’s the second-highest total in the country to Seoul. The Haeundae district is home to 410,000, and Busanjin district has about 350,000. They’re the two most populated districts in Busan. Haeundae and Seomyeon, which is in Busanjin district, aren’t just tourist stops; they’re Busan’s two largest residential areas, too.
When you go online to do research on Busan, one of the most frequently asked questions is on how to get from Seomyeon to Haeundae. People want to find out how long the trip is and what the most efficient means of that trip is. But beyond questions about transportation, people are also curious about food and tourist attractions in those areas. 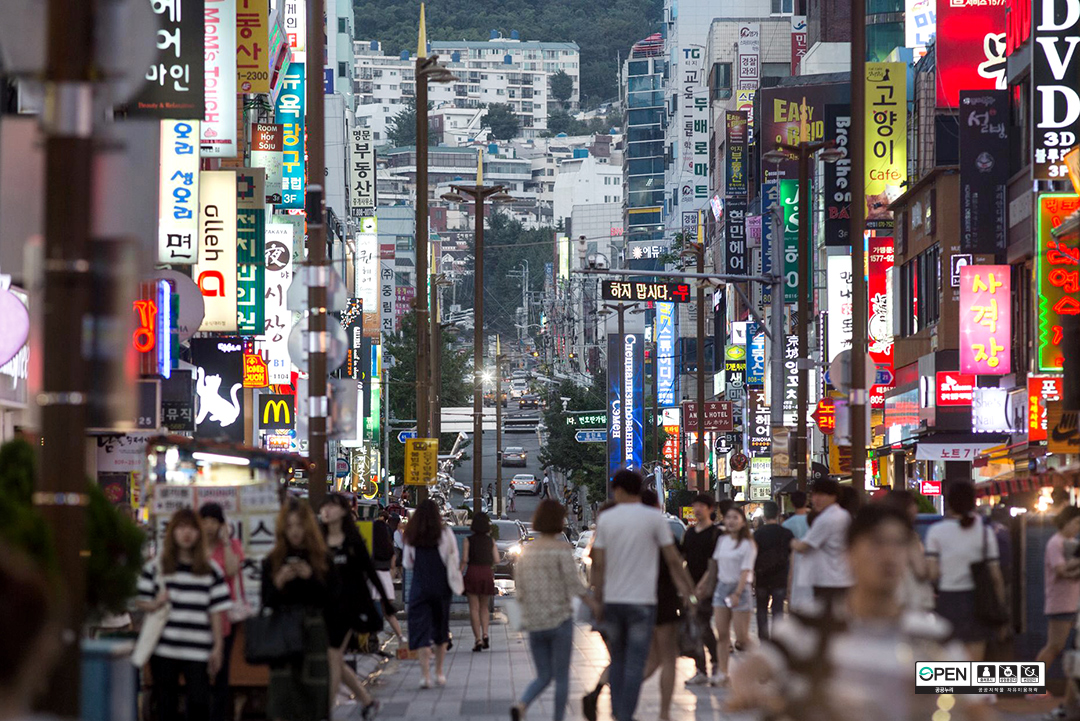 Seomyeon coming to life at night

Seomyeon, Largest Downtown in Busan
Busan Tourism Organization defines Seomyeon as follows: ‘a colloquial term for an area in Bujeon-dong in Busanjin-gu, Busan.'
Seomyeon stretches from Bujeon-dong to Jeonpo-dong, with a wide variety of commercial facilities as the largest downtown in Busan. For tourists, it offers all types of restaurants, bars and cafes, and it’s also a major shopping center. At the same time, it’s the financial, administrative, medical and business hub for Busan. With elements of a tourist attraction and a business district, Seomyeon is Busan’s answer to Euljiro and Myeongdong of Seoul. It’s a bustling area full of youthful energy and an important business and retail district. But back in the days, Seomyeon was only made up of strawberry fields.

The name Seomyeon stuck in the late Joseon Dynasty. It used to fall under an old Busan administrative district of Dongnae, and the name is still in use. Back then, Seomyeon was on the periphery of Busan. After the open port period of the late 1800s, the Japanese settled down around the Choryang Waegwan area, and Jung district expanded into the city. But Seomyeon remained on the outside looking in. It was merely some neighborhood located alongside a streetcar track that stretched from Jung district to Dongnae Oncheon. But with newly paved roads popping up in the 1930s, Seomyeon’s standing began to change. 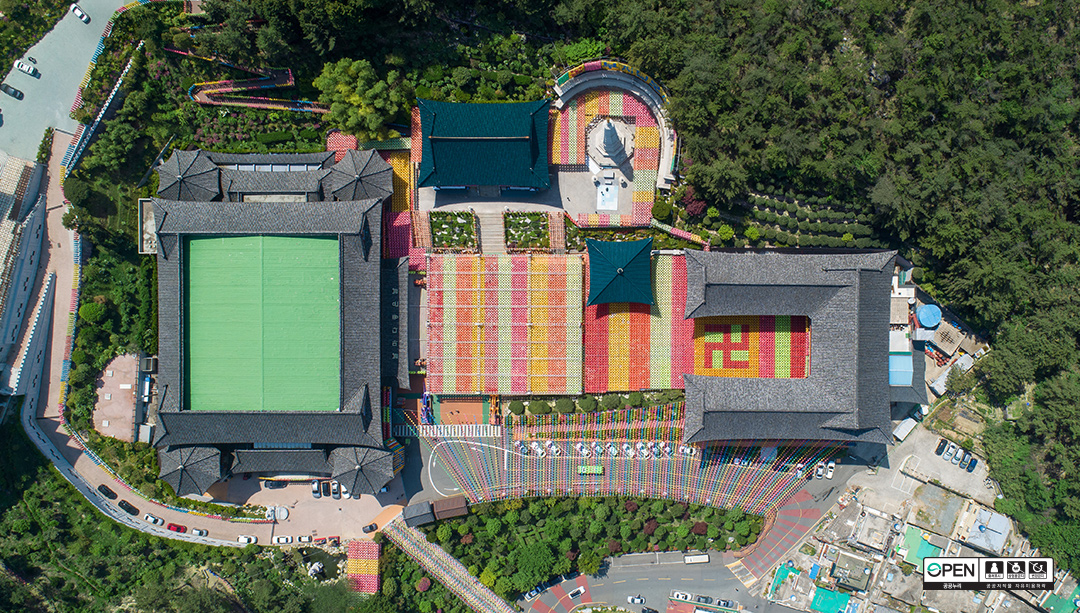 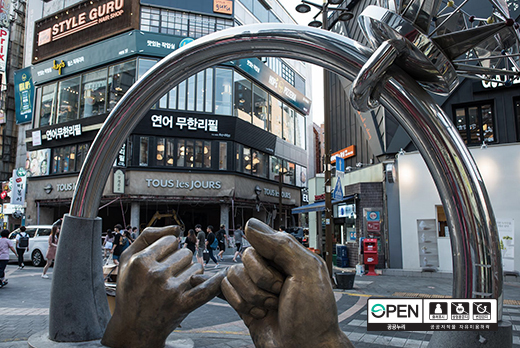 Sculpture standing on a street in Seomyeon 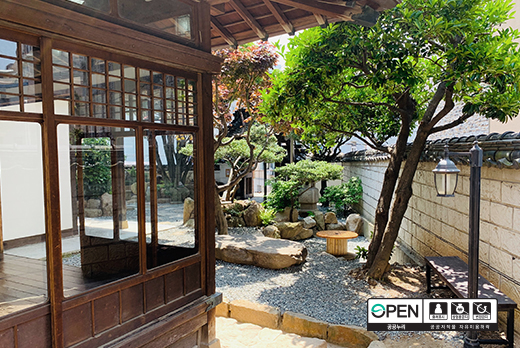 A Jeoksangaok (home once occupied by enemy) in Seomyeon

Incidentally, Seomyeon’s growth picked up speed after the Korean War, and it gave rise to the modern industry in Busan. It began with rubber shoes. The post-war Busan saw rubber shoe factories pop up all over the place. Most of rubber shoes available in Korea were being produced in Busan, by manufacturers such as Taehwa, Samhwa and Jinyang. And these factories evolved into running shoes plants. Seomyeon would become the mecca of shoes. Also, former incarnations of some major corporations of the present day set foot in Seomyeon, including Jeil Jedang and Rakhee Chemical Works (which later became LG Group). Nexen Tire, Jinyang Rubber and Daewoo Bus all started out in Seomyeon. This bit of industrial history of Seomyeon isn’t particularly well known. You can find a small sign, 'Memory Lane to Seomyeon’s Modern Industrialization’ between Samjeon Intersection and Jeonpo Daero, along with a map. We recommend you look it up. 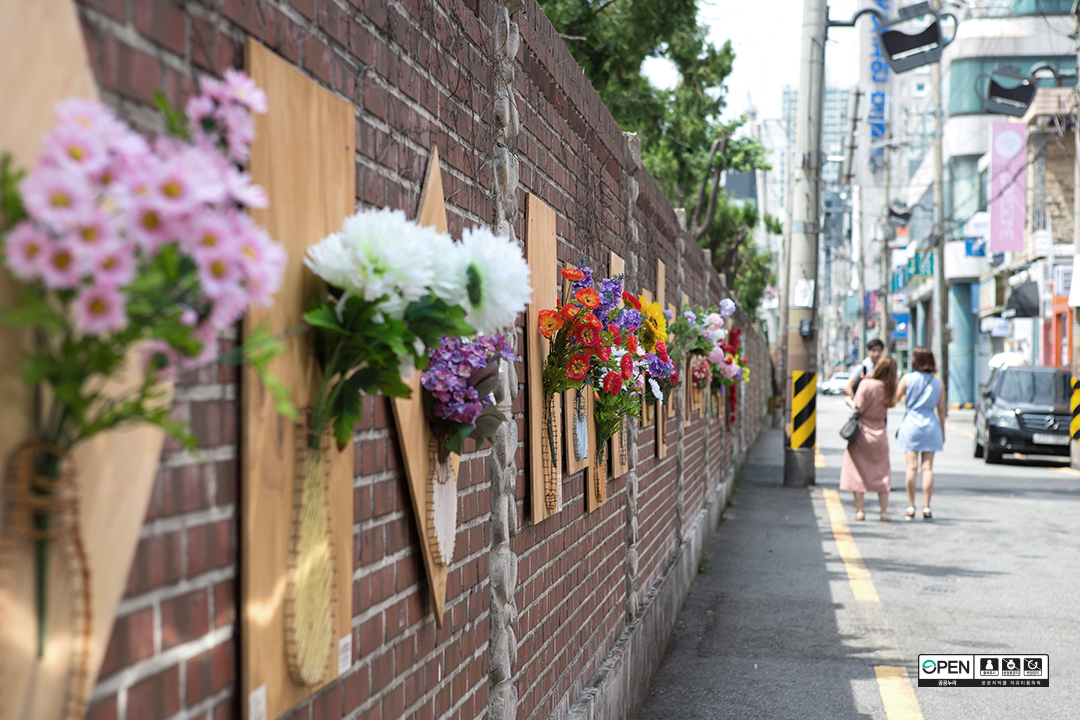 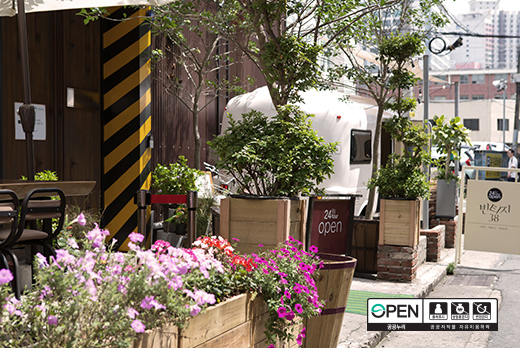 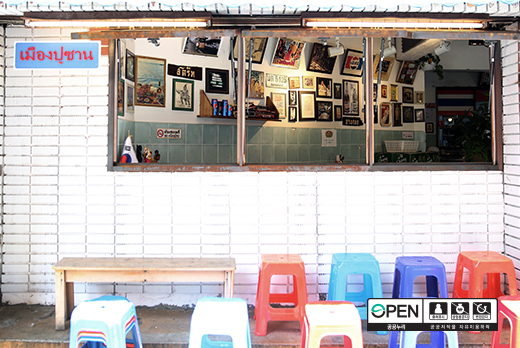 Café alley in Jeonpo-dong, with small cafés and shops

Between Bustle and Tranquility
Today, Seomyeon and its surrounding areas serve as the heart of Busan. Roads and railways that stretch north-south and east-west all intersect in Seomyeon. And Seomyeon Rotary came to represent road traffic in Busan. Below the rotary, Daehyeon and Seomyeon Underground Shopping Centers are linked, with shops stretching out for over 1km. On the ground, LOTTE Department Store and LOTTE HOTEL BUSAN are located, along with other shops that you’d typically find in bustling downtowns. Seomyeon Market and Seomyeon Food Alley are beyond the main street. The Dwaeji Gukbap (pork rice soup) Alley, featuring famous eateries like Songjeong Samdae Gukbap and Pohang Dwaeji Gukbap, is also in this area.
Seomyeon offers a blend of old-style markets and restaurants that couldn’t be any less trendy, and of shops on the cutting edge. The whole craft beer phenomenon in Busan and South Gyeongsang area started in Seomyeon. Many of the most popular craft beer bars, including Bronx and Galmegi Brewing, have their roots in Seomyeon. Jeonpo-dong, across 1 Seomyeon, has seen a rise of cafes in recent years. The area used to be crowded with tool shops and hardware stores, but trendy cafes and shops have managed to find their places there, too. 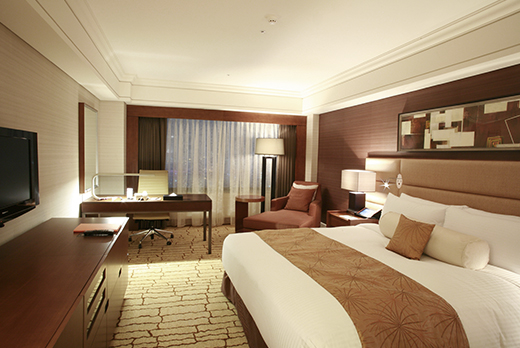 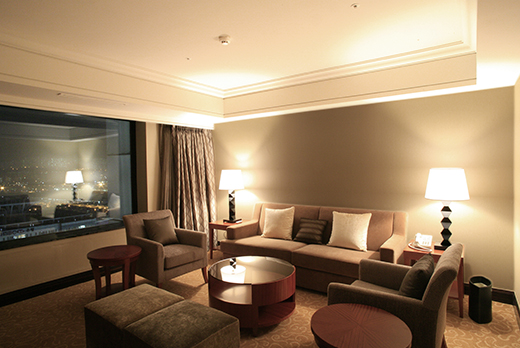 Where to Stay in Seomyeon: LOTTE HOTEL BUSAN
LOTTE HOTEL BUSAN is the first LOTTE HOTEL in the city of Busan. Some 650 rooms have all been renovated for added elegance. Choo Shin-soo Star Room, inspired by the Major League Baseball star, has become a sensation among baseball fans. Seomyeon is a bustling neighborhood and a popular stop for international travelers to Busan. 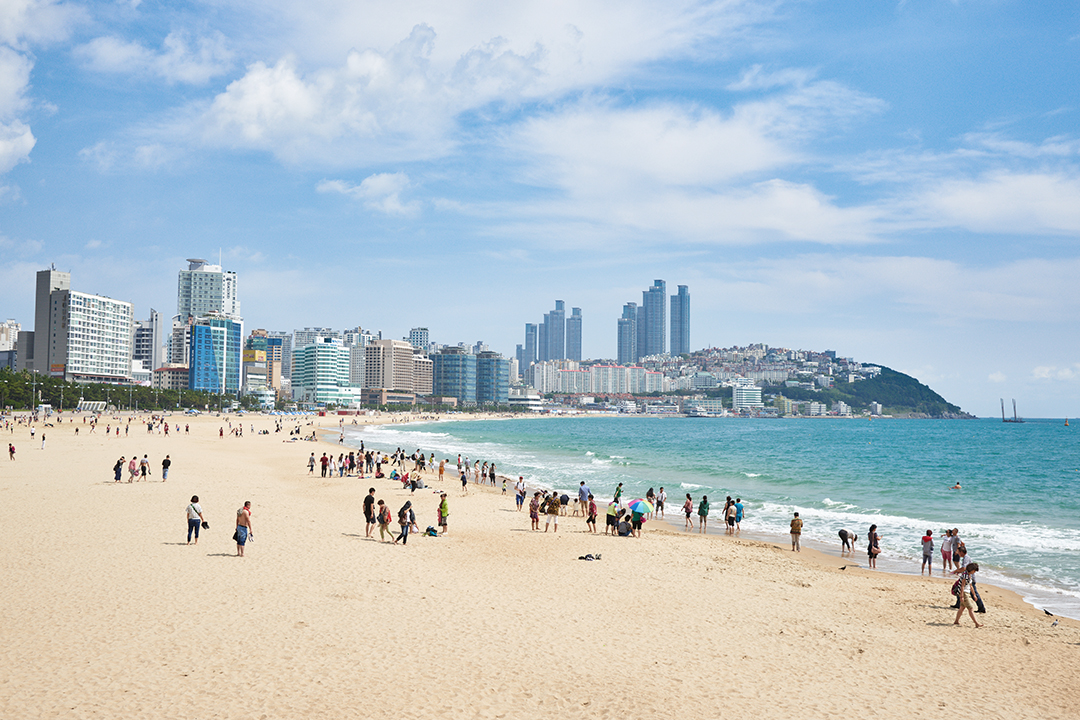 Haeundae, Cloud above Ocean
Haeundae Beach, Songjeong Beach, Dongbaek Island, Busan Cinema Center, Dalmaji Hill… These are some of the best-known tourist attractions in Haeundae.
Haeundae-gu is perhaps the hottest neighborhood in Korea, not just in Busan, today. High-rise apartment buildings there heated up real estate markets. At the beginning of every summer, all other beaches look to Haeundae to determine their open date. It’s always been a famous tourist destination and a popular residential district.
Haeundae boasts a long history. ‘Haeun’ comes from the pen name of the great scholar and poet from the Unified Silla period, Goun Choe Chiwon. Choe was so brilliant that he passed the imperial examination in Tang China and rose to high office. Upon returning to Silla, Choe was picked by Queen Jinseong to serve as a government official. But in the face of opposition from aristocrats, Choe stepped down and retired to the country. Choe eventually fell in love with the gorgeous scenery of Dongbaek Island, and named the area Haeundae. A stone carved by Choe remains on the cliff of the island. 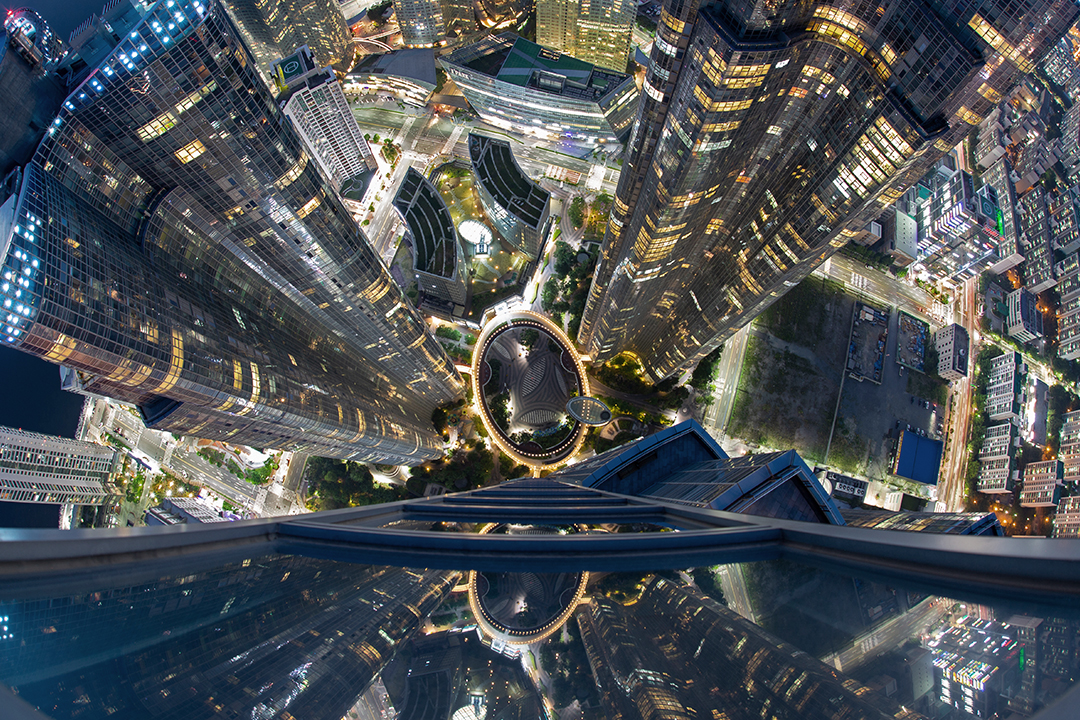 Up until the 1950s, Haeundae-gu fell within the jurisdiction of Dongnae-gu. Busan went through multiple administrative changes. And in the 1980s, Haeundae was elevated to the current, district status. In the mid-1990s, after a 10-year plan, the ‘New Haeundae Town,’ the first planned community in Busan, was established, leading to a surge in population in the area. About 100,000 people moved to Haeundae, and about 12 percent of all Busan residents live in Haeundae-gu.
Haeundae-gu has everything that Busan has to offer. There’s the new downtown, plus some high-end residential areas such as Centum City and Marine City. On the other hand, there’s Bansong-dong, a less well-to-do area with the ocean and the beaches not even in sight. Haeundae is surrounded by mountains, river and ocean. 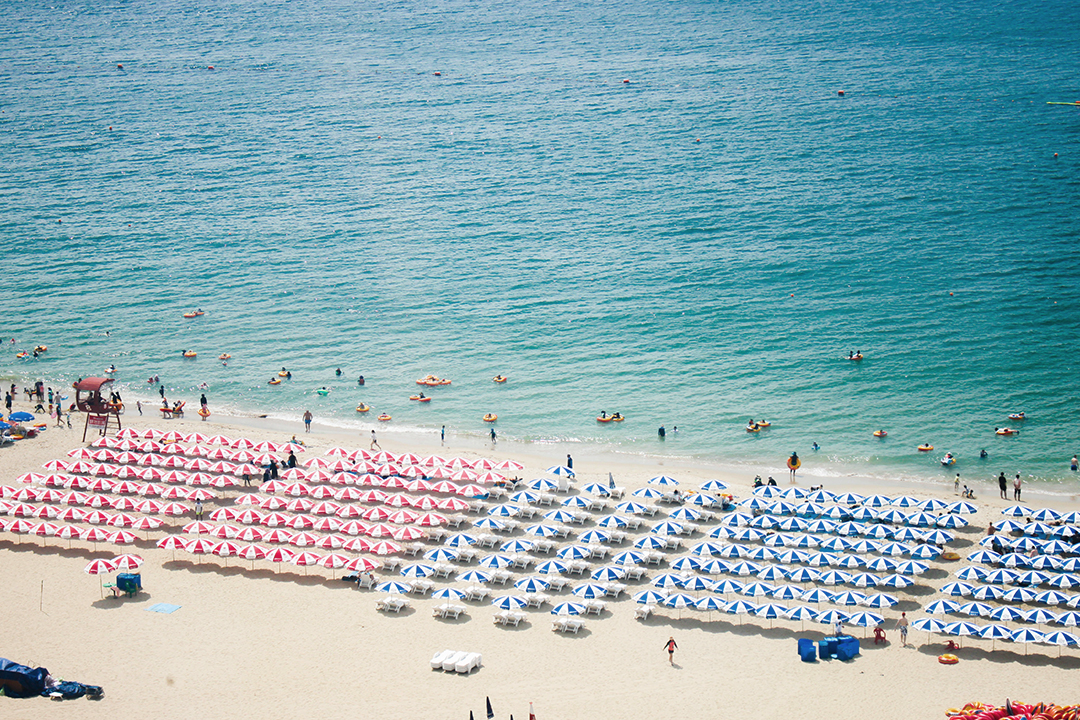 Parasols lined up on Haeundae Beach 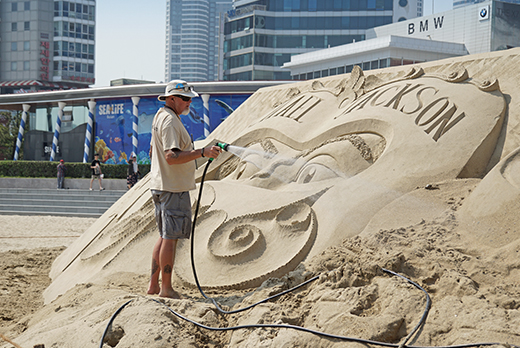 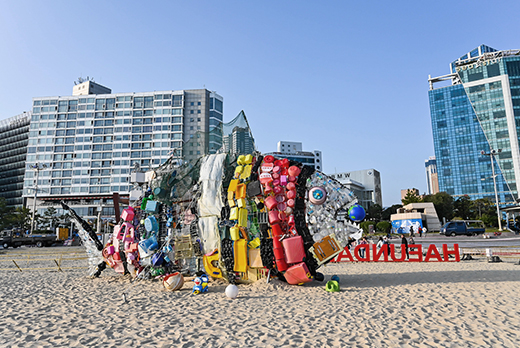 A fish-shaped sculpture themed on environment and nature

Haeundae for Tourists
For outsiders, Haeundae is synonymous with Haeundae Beach. It actually takes up only a small part of the district. But for tourists, Haeundae-gu is basically defined by Haeundae Beach, which stretches for 1.5km, and surrounding attractions. Most of Busan’s popular spots are indeed around the beach.
Tourists also spend time around Busan Aquarium, Dongbaek Island and its Nurimaru and Centum City. Once the sun goes down, the youthful crowd heads to Cheongsapo. It’s the name of the fishing port in Jung-dong. The area has a slew of sushi and seafood restaurants, with cafes and other eateries sticking out in between. Cheongsapo Observatory and Lighthouse provide spectacular backdrops for photos. 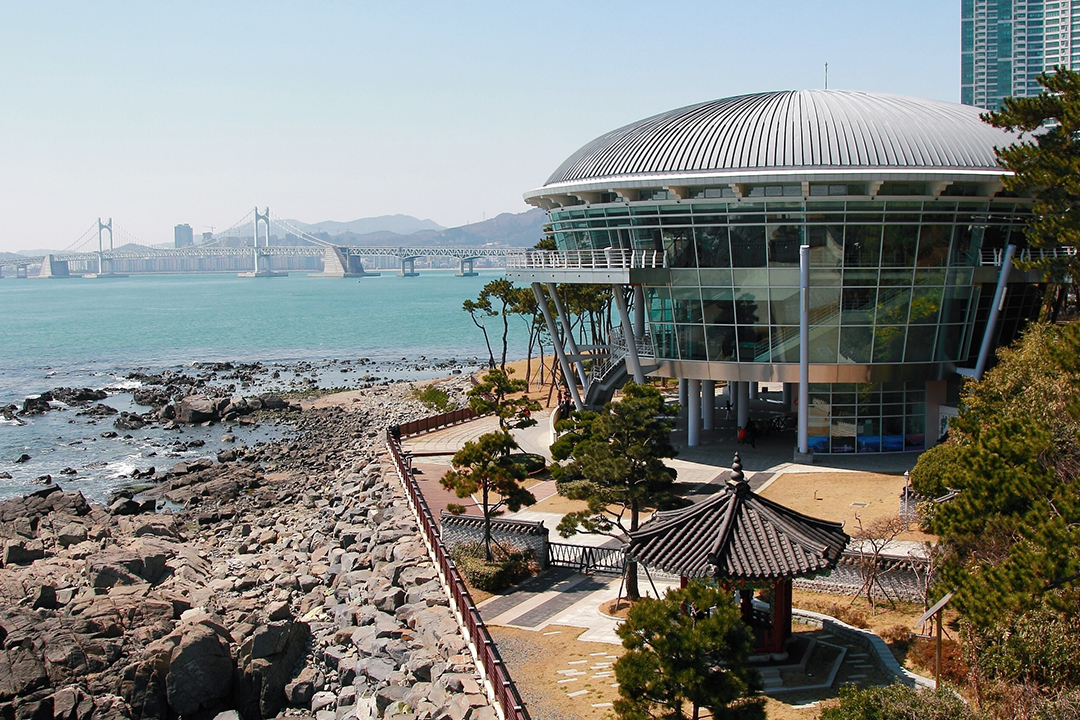 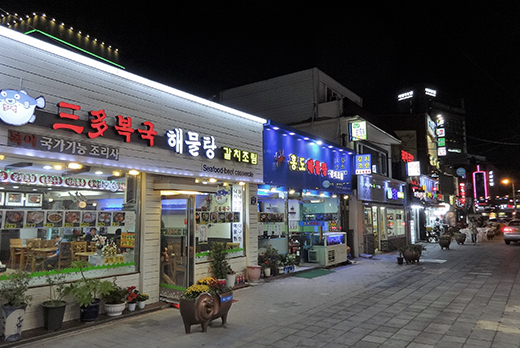 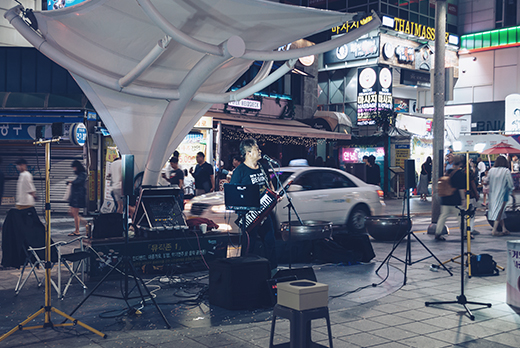 After spending time at Haeundae Beach, many head to The Bay 101 in the evening. With the beach out in front and high-rises at the back, The Bay 101 will let you enjoy being in the modern and elegant seaside city to the fullest. The Bay 101 is one of the most popular Instagrammable spots for Busan travelers. Lights from skyscrapers make for particularly pretty night views. Restaurants, cafes and yacht moorings give off exotic feels. 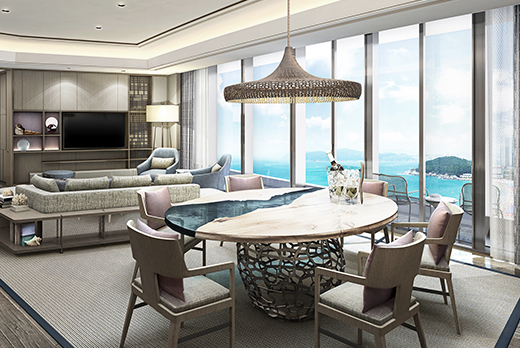 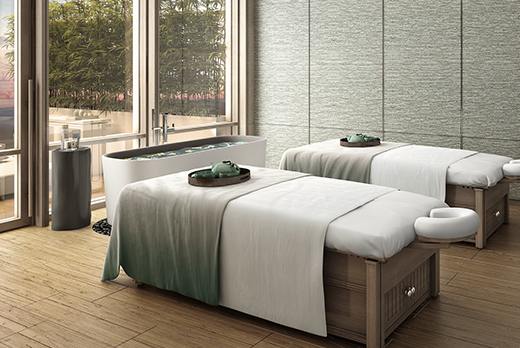 Where to Stay in Haeundae: SIGNIEL BUSAN
SIGNIEL BUSAN, situated in Haeundae-gu’s Jung-dong, is the second SIGNIEL hotel, after SIGNIEL SEOUL. The hotel is designed by the world-renowned interior design group HBA, and most of rooms have balconies that offer views to Haeundae Beach. Infinity pool, luxury spa and kids’ outdoor activity garden help make this a high-end hotel for everyone, be it couples or families.