Latest Method to Enjoy NYC, Edge
Edge is the highest observation deck in the Western Hemisphere that has become the newest landmark of New York City as soon as it opened to the public. To have a chance to stand on this sky-high deck, you have to brace for a thrill tantamount to that of a bungee jump. An angular platform cantilevers 80 feet out from the 100th floor of the Hudson Yards skyscraper.
New York City shares its nightscape equally with everybody. Even if you are not a New Yorker, basking in the city’s nocturnal view leaves you with a warm heart. Myriads of lights that symbolize the dynamic force moving the Metropolis, the one-of-a-kind skyline, and landmarks that sparkle like gemstones throughout the city. These elements create a sense of nostalgia that pervades the modern city, and contribute to the never-ending charm of New York City after sunset.
From Rockefeller Center and the Empire State Building to One World Trade Center, the city has had quite a few observation decks of various designs that would offer a great night view for visitors. When the news came out about the opening of a new sky deck called ‘Edge’ atop the Hudson Yards development in Manhattan, many assumed there would be nothing out of the ordinary. The thought, however, is only to last until you get the detailed information on the actual architecture of the structure. Edge signifies more than just the latest sky deck in New York City. With the title of the highest outdoor observation deck in the Western Hemisphere, the Edge is a true engineering marvel created through a combination of multiple cutting-edge technologies. Meet this extraordinary deck sitting high up in the sky in New York City. 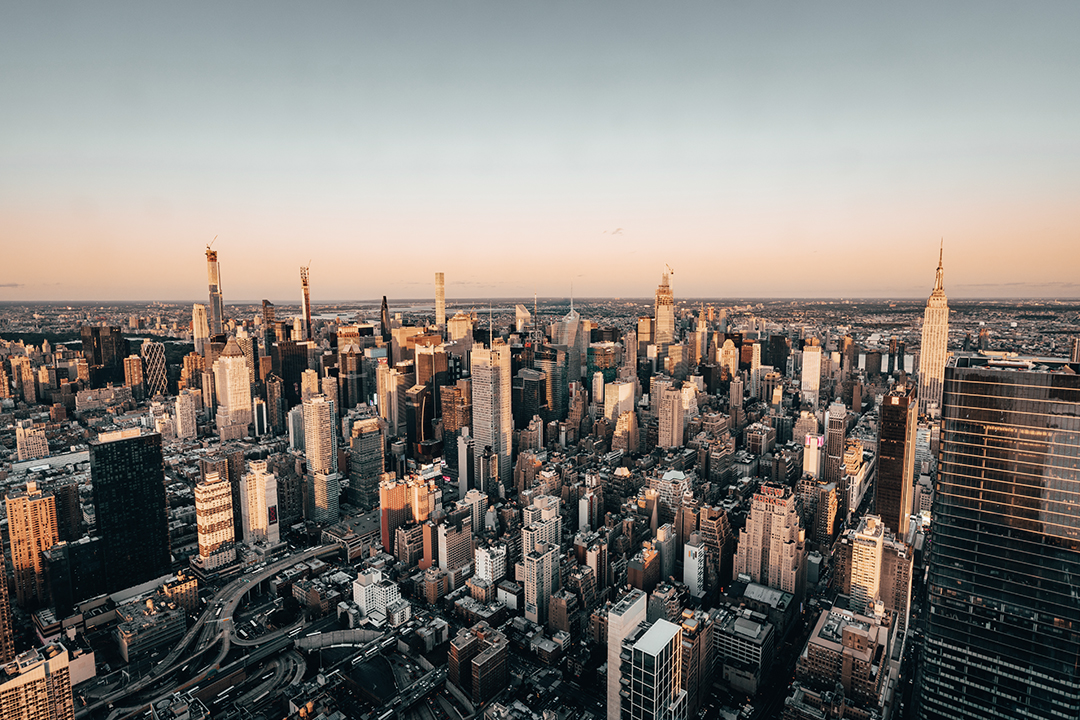 Symbol of Change in West Manhattan, Hudson Yards
For those who are up to date on the latest trends in New York, Hudson Yards is a well-known venue. After seven years in preparation, the modern, mixed-use complex, developed on a rail yard where trains used to be stored, was finally made public last year. Under the banner of “A New Neighborhood for the Next Generation,” the project was famous for its massive size and modern design. Known as the biggest private real estate redevelopment project in New York City since the building of Rockefeller Center in the 1930s, Hudson Yards comprises high-end residences, office buildings, a hotel, a shopping center and arcade, cultural facilities, a public garden and a plaza, on a 113,300㎡ area. 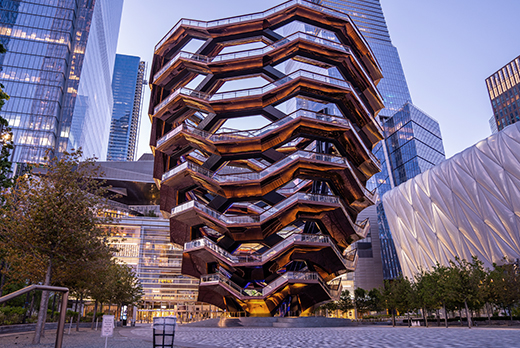 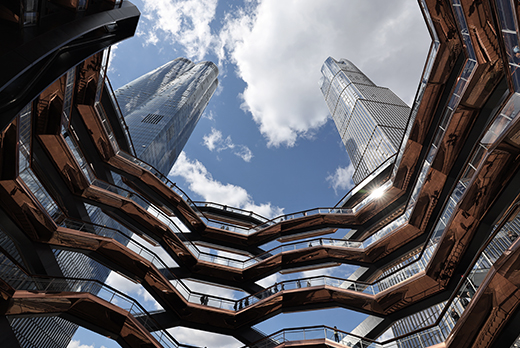 The Hudson Yards and Vessel form a modern community © Shutterstock

Above all, the location of Hudson Yards is unrivaled. It sits in southwestern Midtown that borders some of the trendier neighborhoods including the Meatpacking District, where the floating population is rising thanks to the opening of the High Line Park and the Whitney Museum of American Art, and Chelsea with a growing presence in the flourishing art industry. To be more precise, the complex is located between Hell’s Kitchen and Chelsea, and connected to the northern tip of the High Line. The entire development is considered a historic addition to the city, but there are a few architectures that command more attention than others. Among the top three, ‘Vessel’ and ‘The Shed’ opened earlier in the course of the project and ‘Edge’ finally joined the two. Vessel is a honeycomb-like structure. Its 2,500 steps and 80 landings allow visitors to interact in a unique style throughout the maze-like building. It creates a sensation that a public garden or a plaza is stacked vertically. Meanwhile, The Shed offers cultural spaces with an expandable performance area that slides out from under the glass roof of the building, putting an end to the common idea that buildings do not move. Edge, following the two, defies mediocrity. 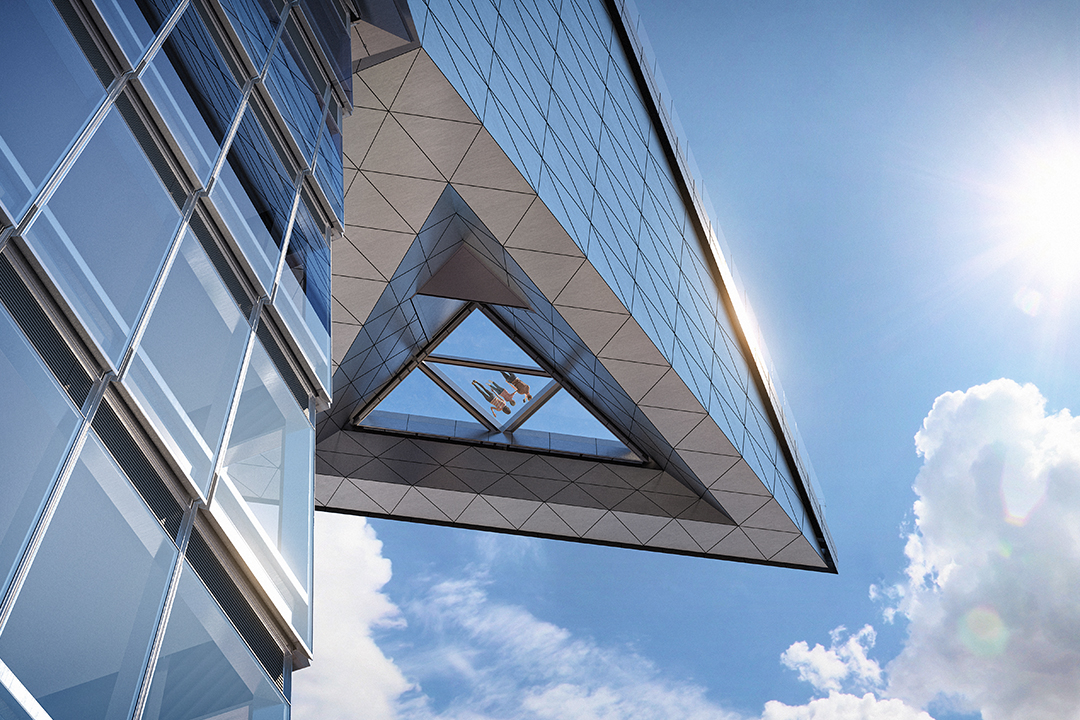 Edge, Fruit of 21st Century Modern Engineering
At 345m above ground, Edge’s triangular deck impressively juts out from the 100th floor of the 30 Hudson Yards building. The platform that sticks out is exactly 24m in length. Made mainly of steel and glass, the deck covers 696㎡ and weighs 347,000kg. The seemingly-slim wedge structure is bolted to only one side of the skyscraper (more precisely, the eastern and southern sides). The builder needed a special strategy to make this possible. The triangular deck is actually made up of 15 sections like in a puzzle, with each of them weighing between 15,000kg and 45,000kg. 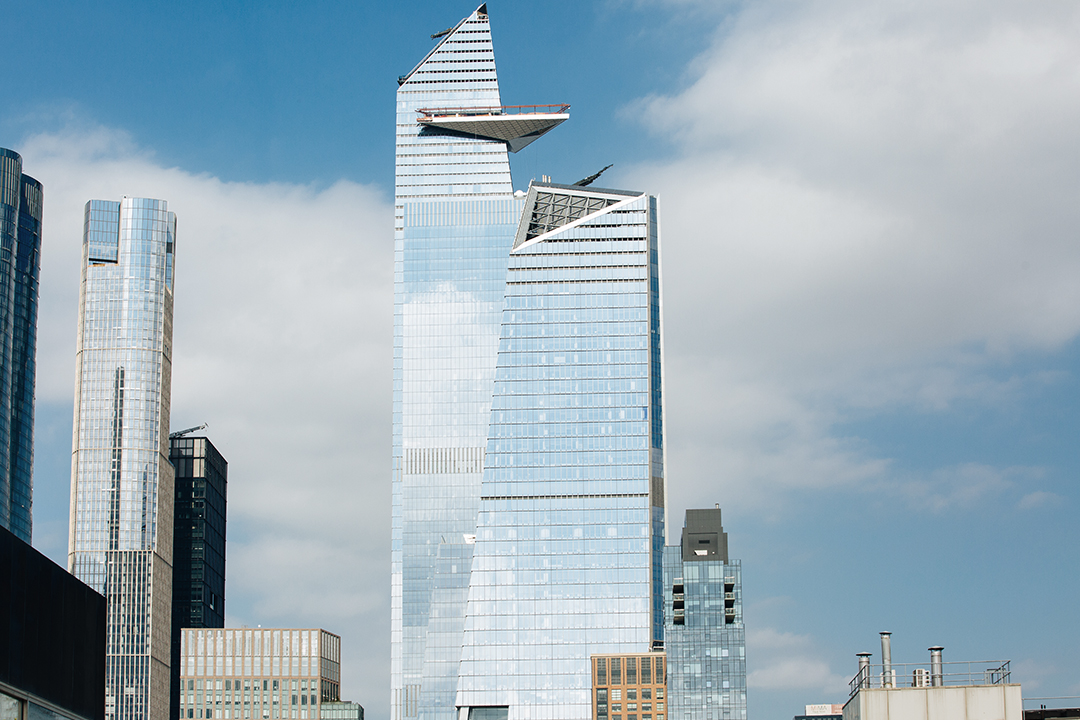 Edge sits on the 100th floor of the 30 Hudson Yards. © Shutterstock

The architectural challenge required global collaboration. The steel used for the platform was processed in Italy and the glass in Germany. For granite pavers, the stone was quarried in Virginia, United States, and finished in Quebec, Canada. The final assembly was carried out in Italy again. The transportation of the deck was no easy task, either. Before the move, the deck which had been put together in Italy for a test run had to be taken apart into the original 15 sections again to be able to fit the cargo on a ferry heading to New York. After arriving via the Hudson River, the parts were transported using a special crane on the West Side Highway which was closed off for the moving during the night. Then it took a month to reassemble the sections into a complete deck of the present day. So what you can see right now at the Edge--the sleek appearance of the structure--is the fruit of the state-of-the-art architectural and engineering technologies. 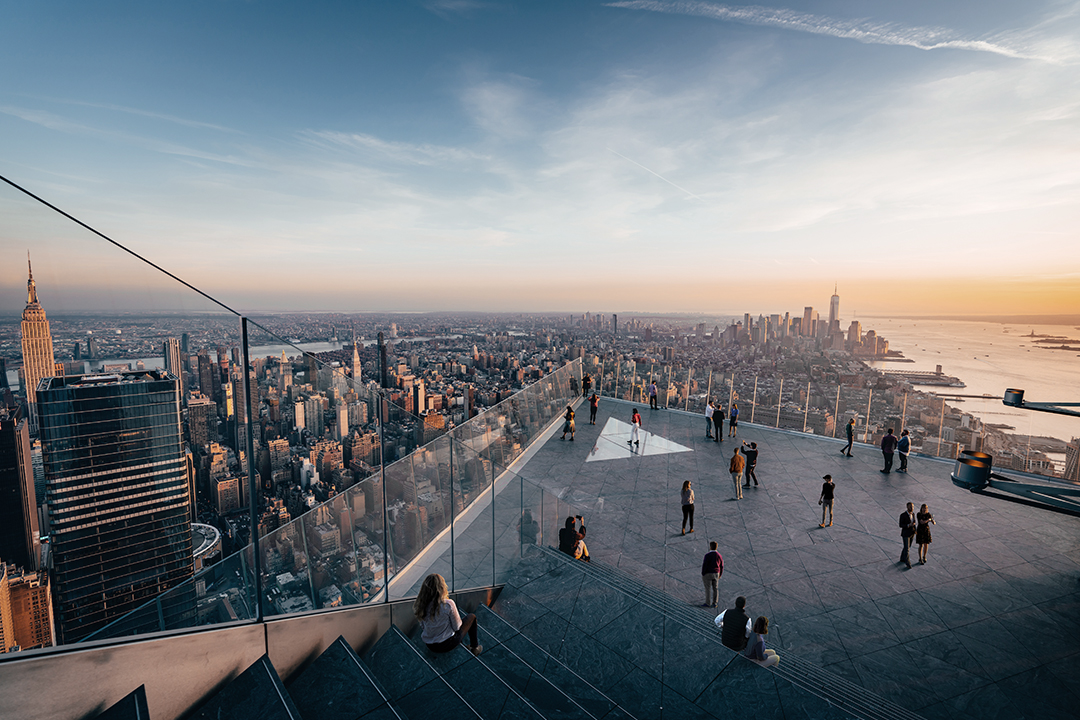 Edge is the highest outdoor sky deck in America. © Courtesy of Related-Oxford

Journey to Edge
To go to the Edge via subway, you are to get on the 7 line to the 34th Street-Hudson Yards train station. Walk along the underground passage connected to the shopping center where you can access the Edge from the fourth floor. A set of elevators there give you a lift to the 100th floor of the Hudson Yards building where the sky deck is located. Sitting in the southwestern corner of the complex, 30 Hudson Yards houses offices of big corporations including Warner Bros., HBO, and Facebook.
American architecture firm Kohn Pedersen Fox Associates(KPF) designed the city’s fourth-tallest building as well as the Edge. In the lobby of 30 Hudson Yards, a hanging installation artwork dubbed “Voices” by world-renowned Spanish artist Jaume Plensa is on display against the cream-colored backdrop. Be careful not to stray for too long as you have to get to the fourth floor to access the deck. There is no need to worry about a long queue in front of the elevators. Rockwell Group, responsible for the interior design of the space, filled the waiting area with interesting artifacts. The highlight of the space, among others, is a digital screen featuring a 24m-long map of Manhattan along with local history. 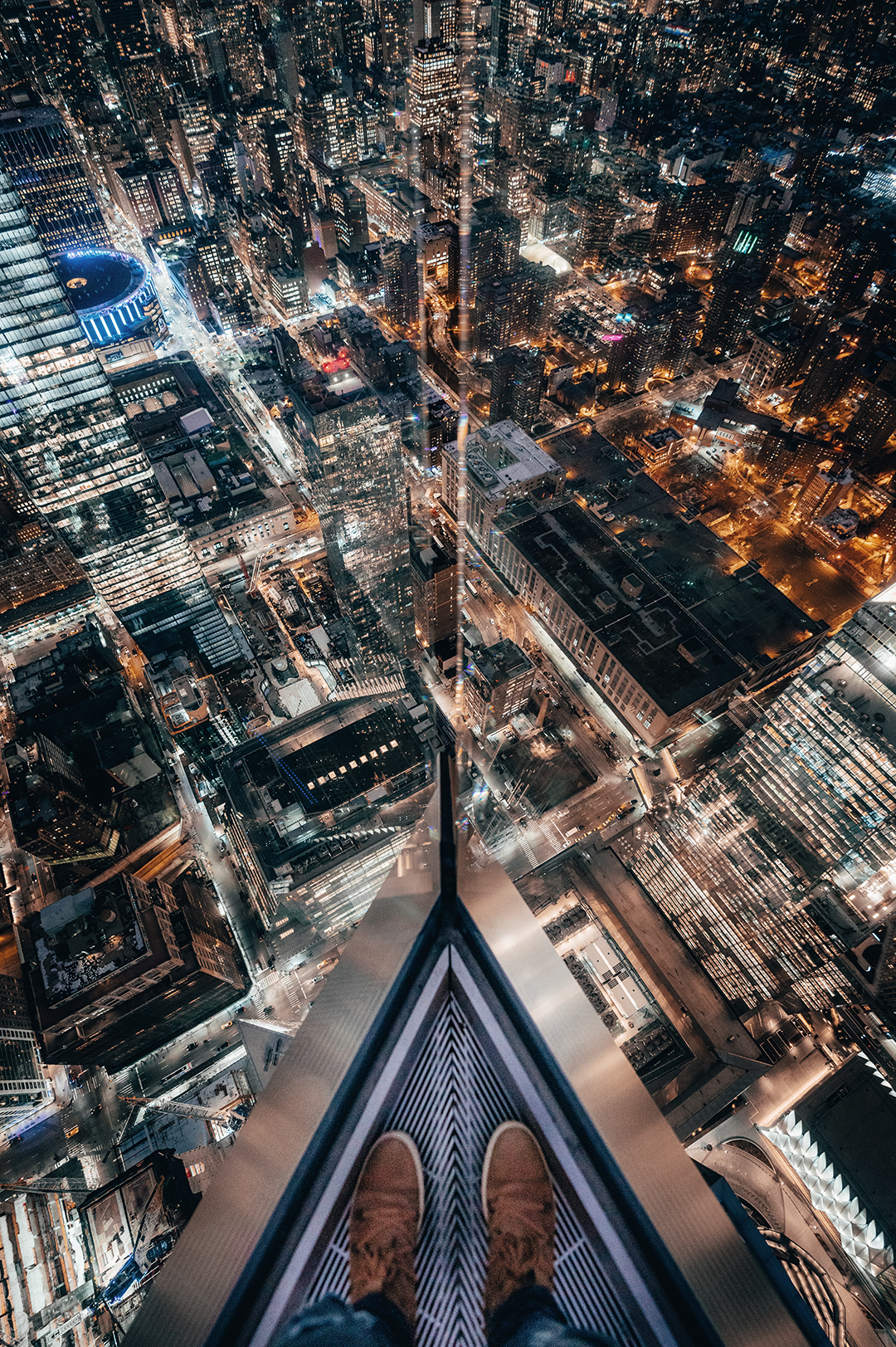 The eastern end of Edge is barely big enough to fit one person. © Courtesy of Related-Oxford

Welcome to Edge NYC
Just 52 seconds. That’s the time it takes to ride up to the Edge observation deck via the elevator, which offers a welcoming ambience with its modern interior using champagne-colored panels and metal parts. No time to dilly-dally going up. A breathtaking view of New York City awaits you right outside. The doors open and you step out. A gentle breeze from the Hudson River refreshes your surroundings. Then before your eyes spread a 360-degree panoramic view of the Big Apple. The thrilling experience is only available to those who have adventurous spirits to seek out fun in midair.
Looking south from the Edge, you will face the western and southern parts of Manhattan under the most vigorous transformation in the 21st century. With the Hudson River in front and the Statue of Liberty overlooking the area, the Meatpacking District, High Line, One World Trade Center, and Central Park complete the iconic view of New York City. To the east is a downtown view including the Chrysler Building, the Empire State Building, Midtown, the East Village, and the East River. You can experience the unwavering energy of New York City in real time while staying up on the Edge.
Highest Sky Deck in Western Hemisphere
It is not difficult to detect the careful consideration of materials and color schemes for the creation of the deck. Subdued gray and steel which easily assimilates into the scenery do not stand out, rendering the beautiful skyline a focal point of the deck. The glass perimeter walls on the viewing platform are 274cm in height, slightly taller than the average human height for safety reasons, but are angled outward by about six degrees for a wider perspective. For a dare, you can try standing on the part of the floor made of glass. It is large enough to get a full body shot if you’d like to try lying down on it. The backdrop, of course, will be the bustling city street view far, far below. 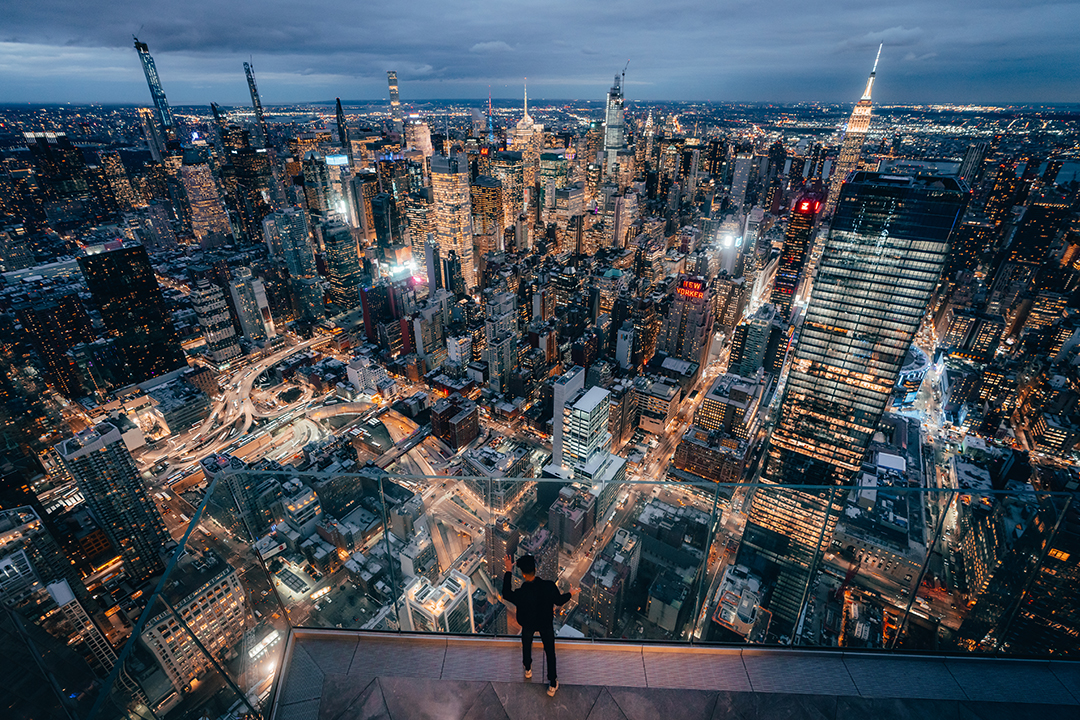 Preparation for Romantic Sunset Viewing
After the barrage of challenges, it is time for the highlight of the day. It is none other than the sunset viewing in New York City. For this, the space has an outdoor tiered seating like at a stadium where you can find a perfect spot to enjoy a sunset. For those who prefer indoors, there is a champagne bar on the same level, and ‘Peak’ on the 101st floor for dining purposes. The Peak restaurant is the first overseas project by Rhubarb Hospitality Collection(RHC), a London-based catering firm operating a rooftop bar and restaurant at Sky Garden which recently joined the list of landmarks in the British capital. Order one of the signature cocktails dubbed ‘New York State Spirits’ and ‘Rhubarb Twist’ at the modern American diner, you are all set for a mesmerizing sunset.
You are practically standing at the highest altitude in the Western Hemisphere. All of your favorite New York City iconic places, from the Empire State Building and the Chrysler Building to the Statue of Liberty, Central Park, and the Hudson River, come into view and become engraved in your memory. At one point while looking at the beautiful sunset, you will realize that cutting-edge technological development can present you with a romantic repose to be remembered for the rest of your life.
Edge
Address 30 Hudson Yards, New York City, NY 10001, USA (Enter on Level 4 of The Shops & Restaurants at Hudson Yards)
Inquiry +1-332-204-8500
Homepage edgenyc.com 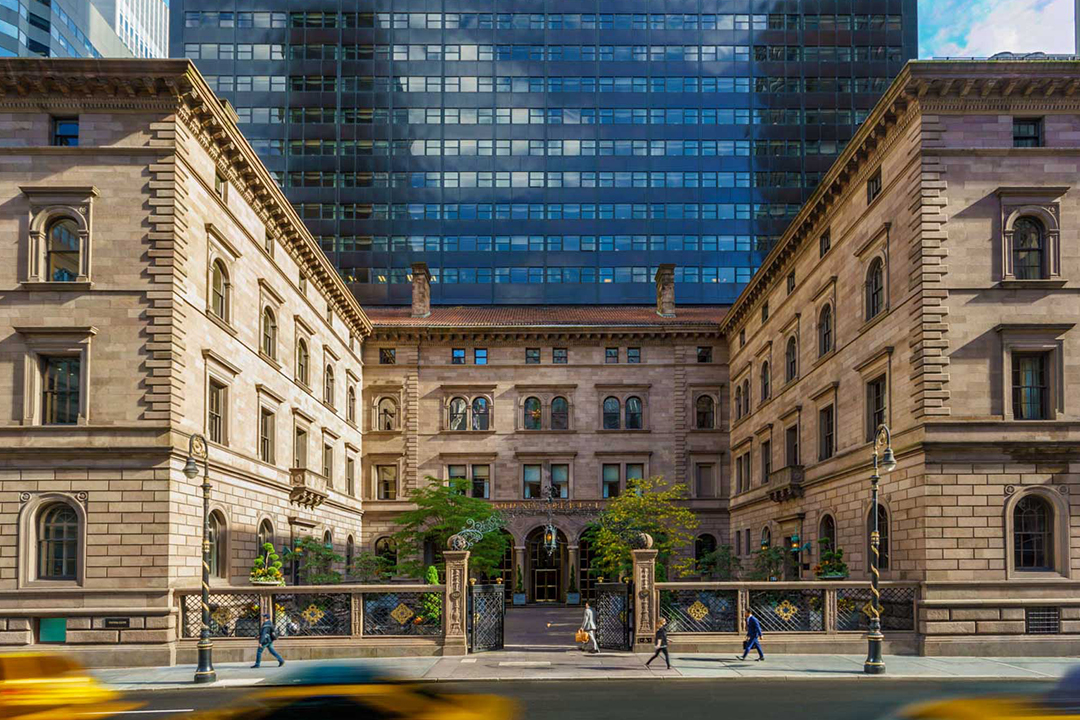 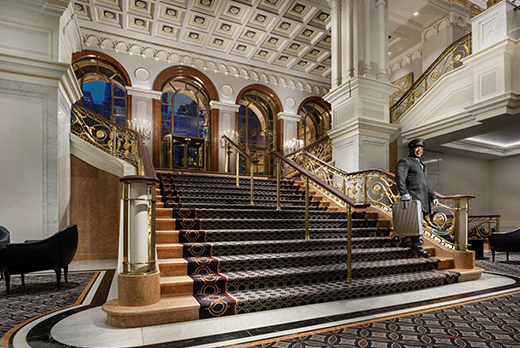 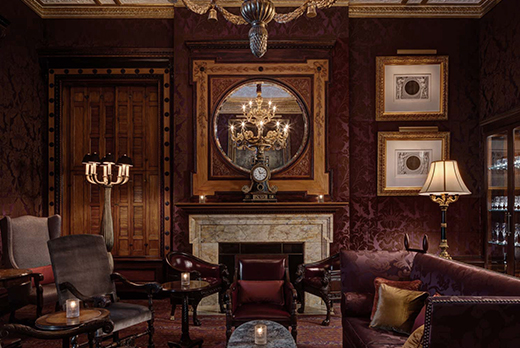 Where to Stay in New York: LOTTE NEW YORK PALACE
LOTTE NEW YORK PALACE is a hotel where the 19th-century mansion commissioned by a prominent financier named Henry Villard coexists with a 55-story modern tower. Having been featured on numerous films and TV series including “Gossip Girl,” the hotel is on the must-see list of many New York City visitors. Equipped with a total of 909 rooms and suites, the hotel offers upscale restaurants and bars including Restaurant Villard, Rarities, and Trouble’s Trust, and a charming courtyard incorporating motifs from 15th-century Italian cathedrals.
Address 455 Madison Avenue at 50th Street, New York
Phone +1-800-804-7035
Homepage www.lottenypalace.com