Buyeo’s Gyuam Village, Its Rebirth as Jaongil
Gyuam-ri, Gyuam-myeon, Buyeo-gun in South Chungcheong Province is a long-forgotten town that is coming to life. The rise of Jaongil is at the heart of the transformation.
When Gyuam-ri Thrived
Residents of Buyeo-gun called the lower Geum River ‘Baekma River.’ And people came from all over the place to settle in a town near Gyuam Port along the Baekma. And Gyuam Port was at the heart of water transportation along the Geum River, with goods being shipped from South Jeolla to the capital, then called Hanseong. The area bustled with people, and markets were set up. Inns, pubs and cinemas joined the party. Around the time of Korea’s liberation from the Japanese colonial rule in 1945, there were about 200 households in Gyuam. The five-day market there was even larger than the one in Buyeo proper.

As time passed and people started leaving the area, however, memories of heyday faded. By the mid-1960s, following the liberation and the Korean War, Baekje Bridge was built near Gyuam. You could reach Buyeo and other inland regions without passing through Gyuam. By the 1990s, water transportation became obsolete. Outsiders no longer had reason to visit Gyuam, and residents no longer had reason to stay. One by one, people started moving out. More and more homes became deserted. 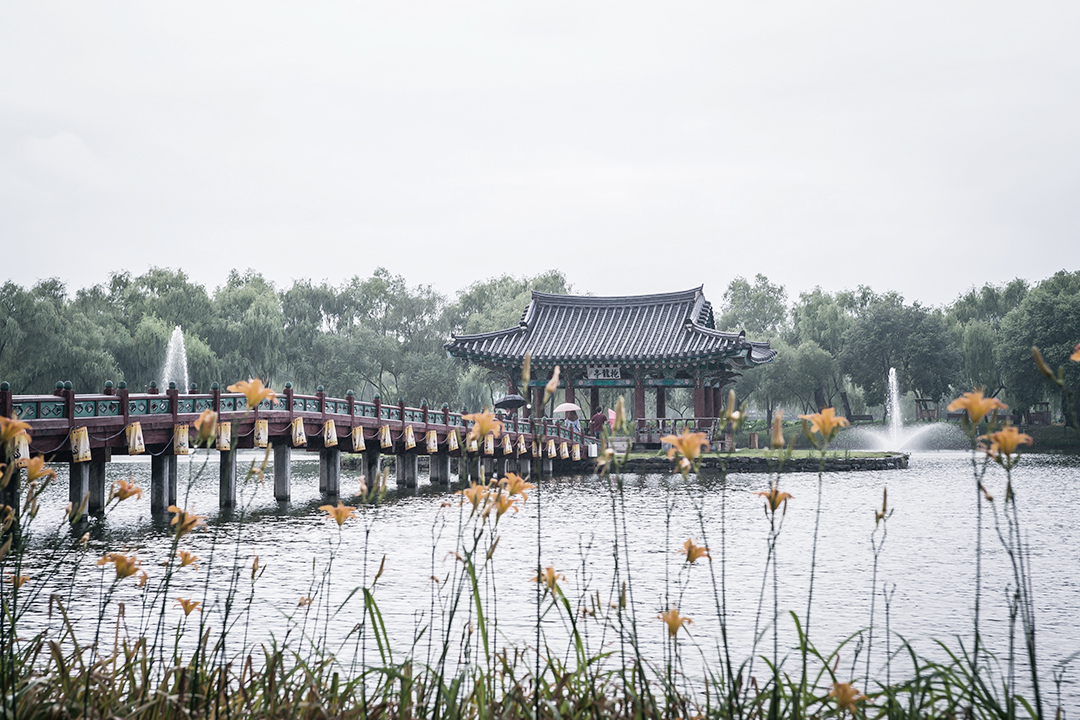 View of Gungnamji, a major tourist attraction in Buyeo 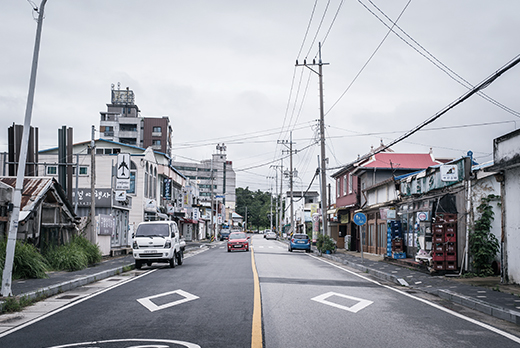 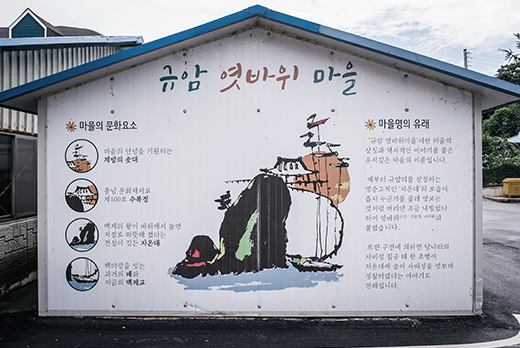 New Life in Gyuam
And then Gyuam Village started coming to life a few years ago. Decrepit buildings and abandoned homes were renovated. Pretty cafes and bars, bookstores and guesthouses began popping up. The town started taking in visitors on weekends and assuming the look of a tourist destination.

Jaongil Project, by the art and crafts group ‘Segan,’ has been the key to the transformation. Segan’s CEO Park Gyeong-ah, who has run traditional culture select shops in Samcheong-dong, Insa-dong and Hey-ri, decided to build new art and craft space in Gyuam, setting in motion a remarkable evolution.

Park wanted to ensure artists wouldn’t be kicked to the curb because of rising rents, and also to retain the original forms of buildings being renovated. Above all, she wanted to set up a cultural district that the locals could also enjoy. Park knew Gyuam Village, which she visited as a student at the Korea National University of Cultural Heritage in Buyeo, would be the place where her ideas would come to fruition. The neighborhood still had homes built in the modern era that blended modernized hanok with the Japanese style, as well as more traditional hanok and Western-style homes built after the liberation. In Park’s mind, changes for Gyuam Village and Samcheong-dong overlapped. 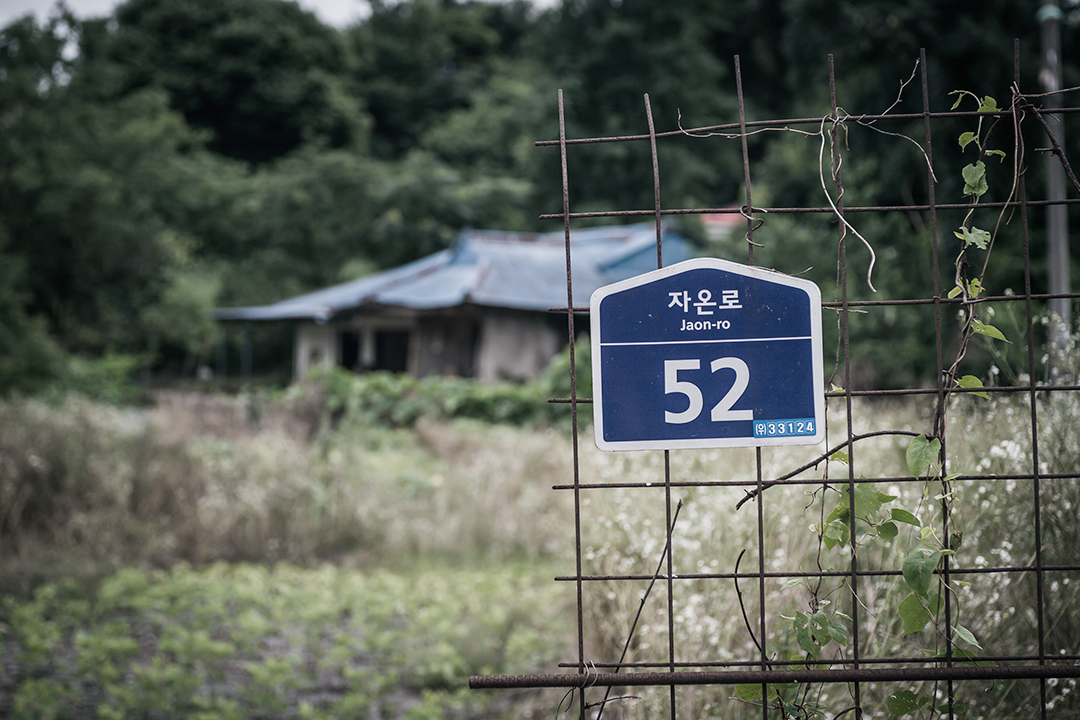 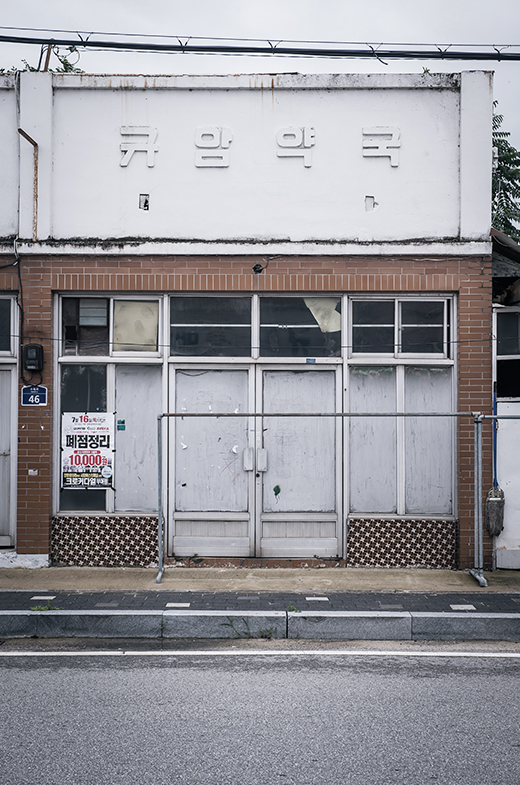 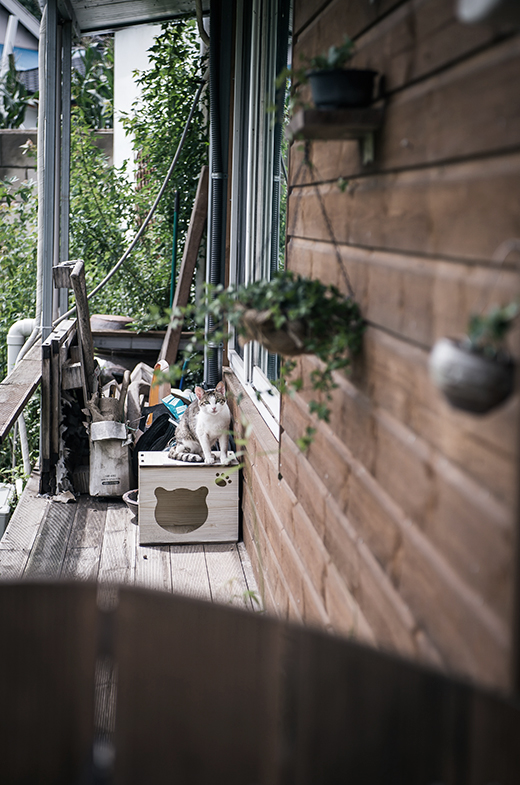 There are many deserted homes in Gyuam Village.

Pictures to be Drawn on Jaongil
No matter how old buildings were, Park didn’t want to bring them down and start from scratch. She wanted to preserve their history and still produce beautiful places that made people want to visit.

“At first, all the locals tried to dissuade me. They said I should just destroy those houses and forget about reviving them,” Park said. “But once they were finished, they all loved them. It was a pretty reckless pursuit on our part, but we gave new life to houses that would have just disappeared. It gives us a great sense of reward when we see those places.”

Segan’s fingerprints are all over Jaon-ro and Subuk-ro in Gyuam-myeon. Of 16 buildings that it has secured rights to, six or seven of them have been turned into a bookstore, a craft shop, an accommodation, a café and a restaurant. They’re up and running every day or on weekends. Others will soon join them in breathing new life into this area. Travelers will also learn that there’s more to Buyeo than just Baekje cultural heritage. This is exactly what Segan had in mind – the combination of the traditional and the cultural in a modest village.
“At first, all the locals tried to dissuade me. They said I should just destroy those houses and forget about reviving them. But once they were finished, they all loved them.” 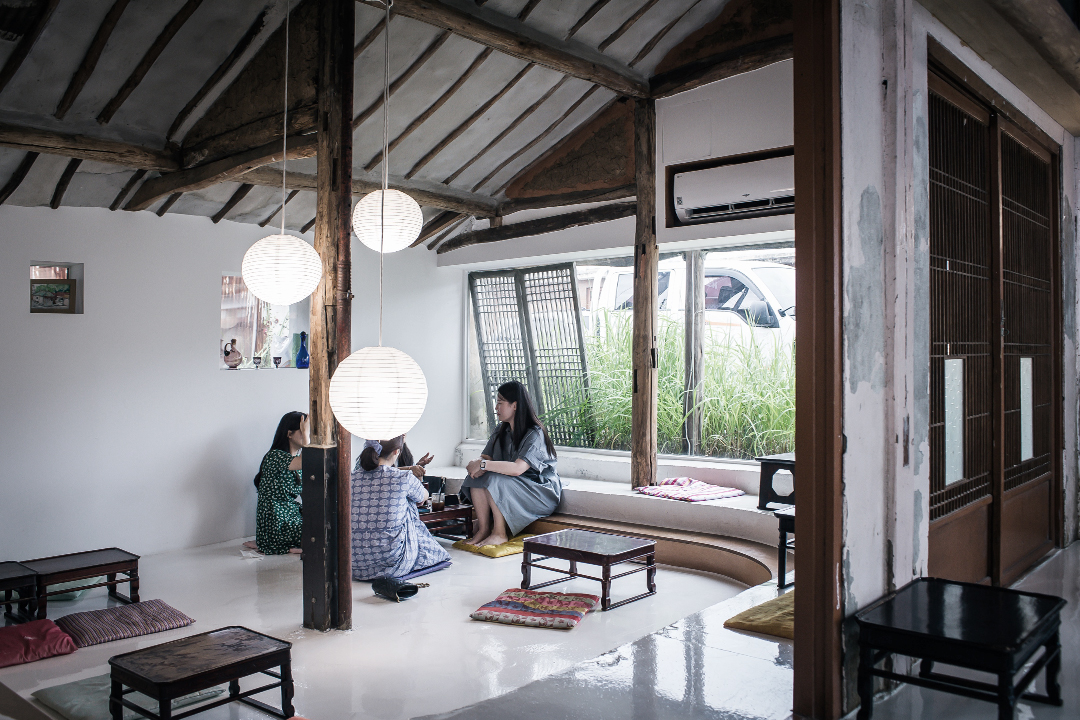 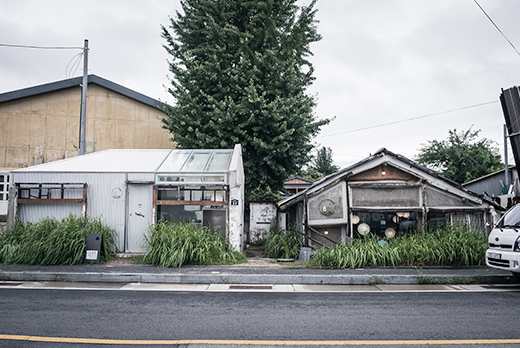 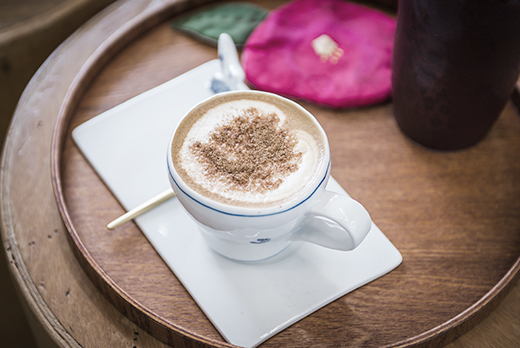 Suwolok
The first two syllables of the name means ‘exceptional’ and ‘moon.’ The café gets particularly crowded on weekends, making it perhaps the hottest place not just in Gyuam but in entire Buyeo. An Instagram search of the name will lead you to more than enough photos taken by the café’s visitors. The building once housed a small, high-end restaurant back in the days of busy water transportation. Only the architectural records, rafters and walls were left intact, and the building was wrapped in galvanized steel. Two buildings in disparate styles stand next to each other, with a small yard between them. Ceramics used to serve coffee and tea, such as cheongja (celadon), baekja (white porcelain) and jinsa, were all made by homegrown potters. It will also start serving Buyeo’s traditional sogokju, and we can’t wait to see how it will look as a tavern by night. 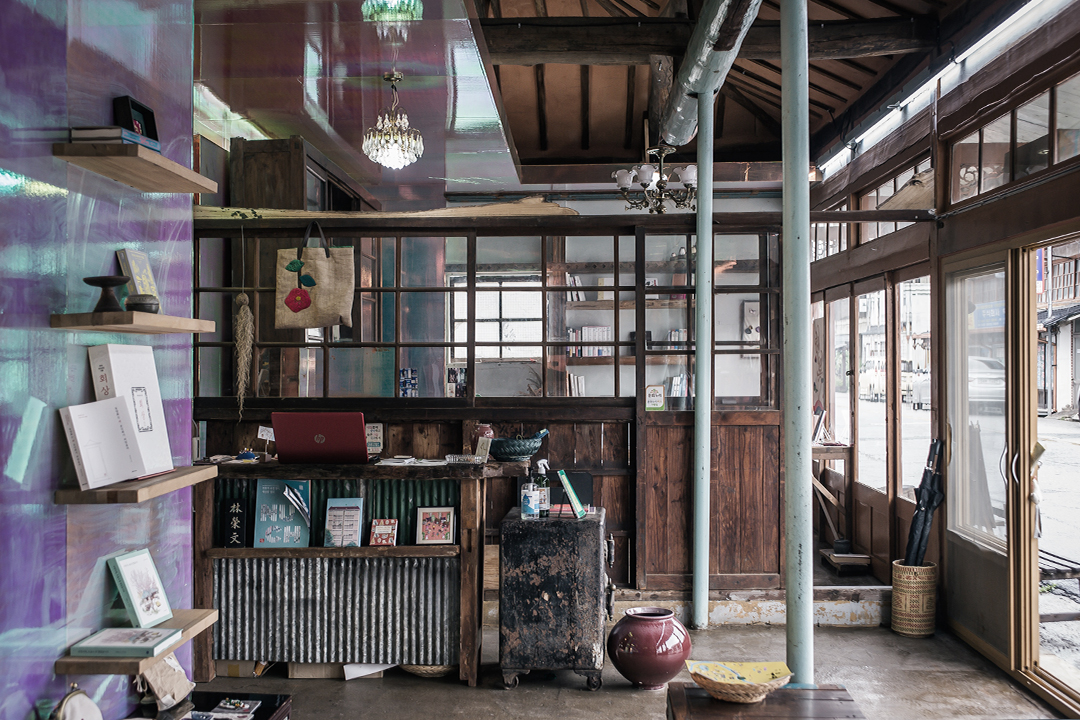 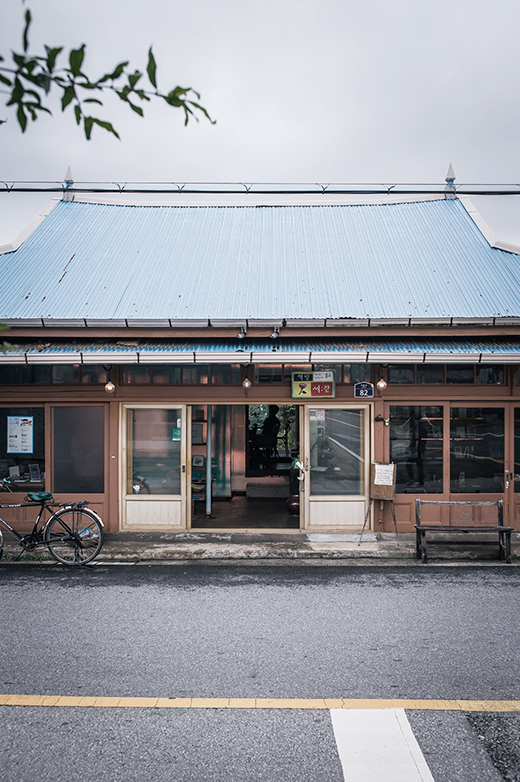 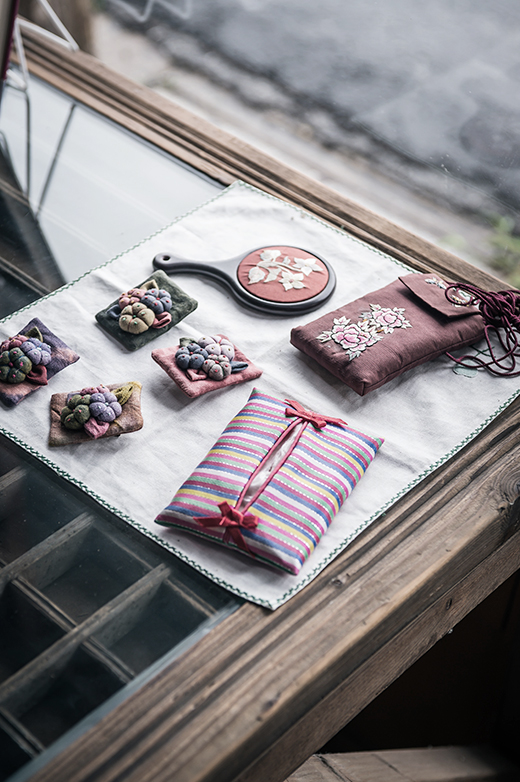 Bookstore Se:Gan
It was the first shot that opened on Jaongil. What once was ‘Mr. Lim’s Smoke Shop’ became Buyeo’s first independent bookstore. In particular, it has a lot of books on traditional craft and art. To save cost, some of the remaining materials and timber were used for construction. And the shop ended up being that special place that’ll take people down the memory lane. The cash register for cigarettes is now a bookcase, and the cabinet that once displayed packs of tobacco now holds books. Baskets that were spotted during construction are also used for books. An old bicycle that the late Mr. Lim rode is parked outside the shop. 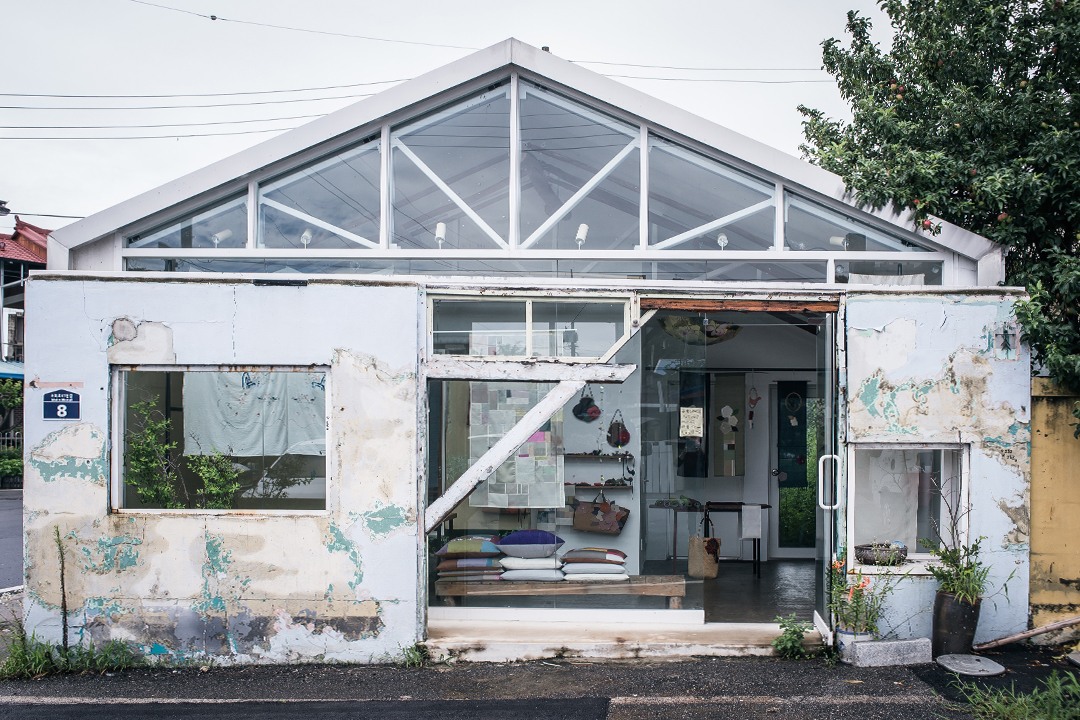 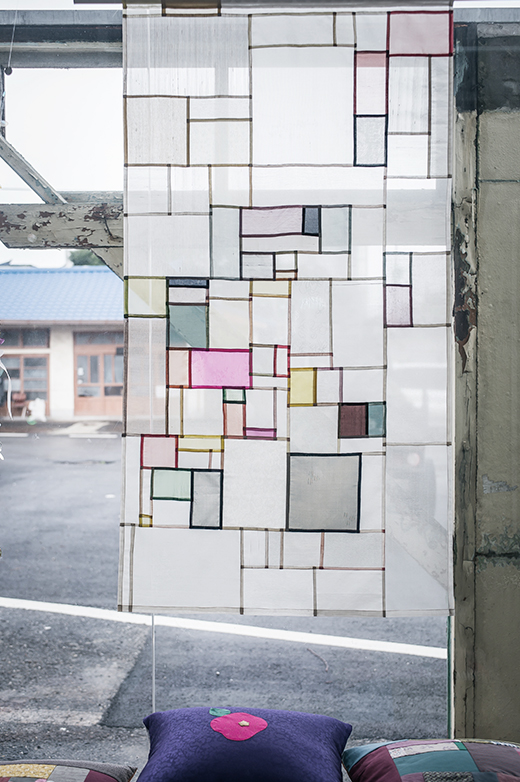 Gyubang Sanchaek (Utjip)
Back in Gyuam’s glory days, it was a restaurant serving gukbap (hot soup with rice). The remodeled version is an atelier where traditional textile artists work and exhibit their products. You can also rent out the whole atelier to spend the night. It has two bedrooms plus a small attic. Textile crafts on display make for fine souvenirs. It’s nothing fancy, but people come for a therapeutic R&R. Utjip was once featured in the popular architectural blog ‘ArchDaily.’ 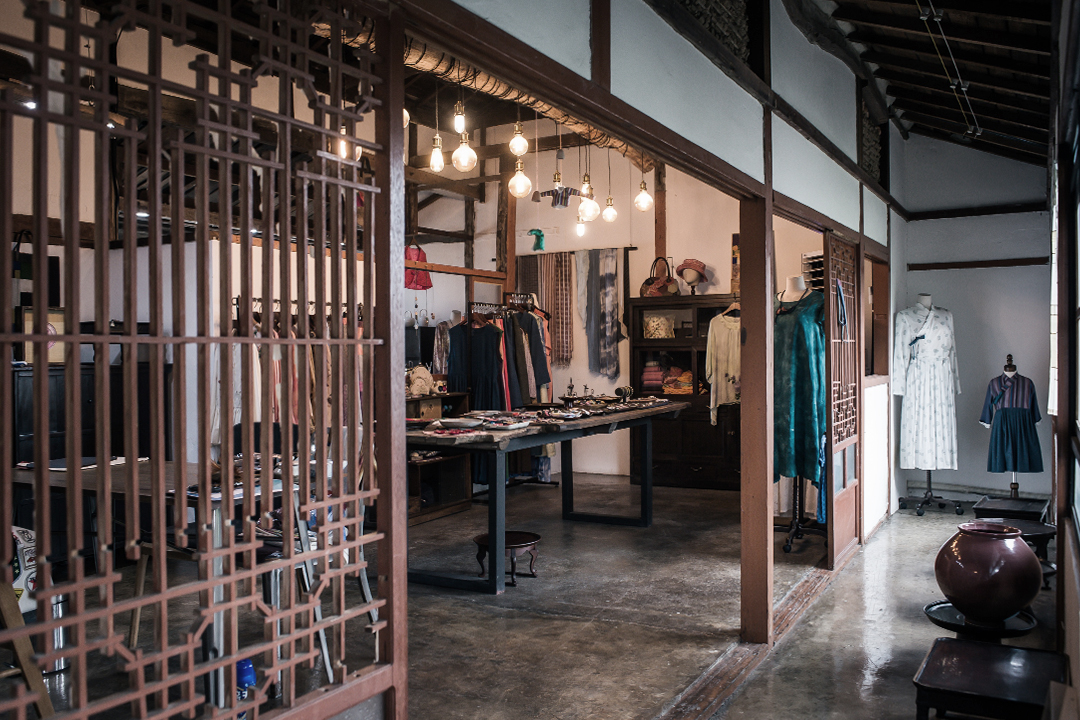 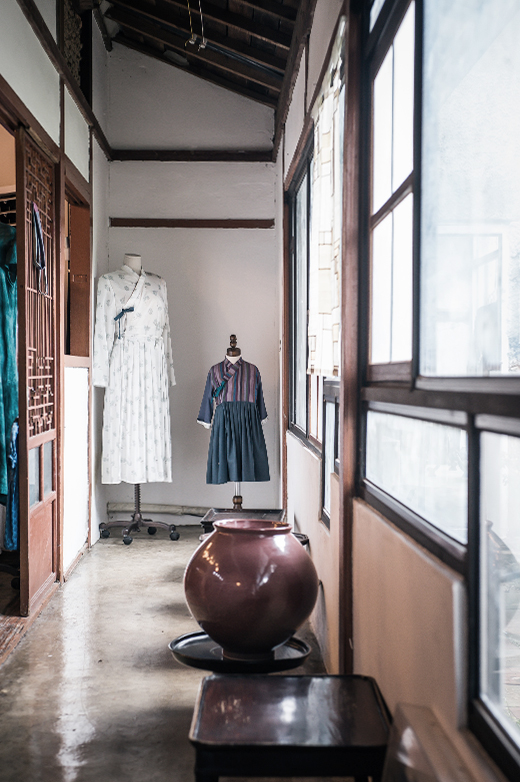 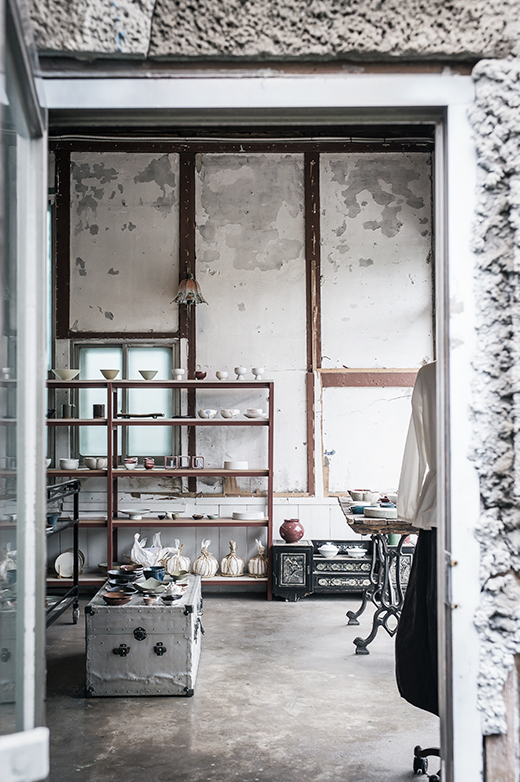 Craftshop Pyeonji
The craftshop occupies a spot where Gyuam’s first post office and official residence stood. The post office later became a home appliance shop, and then was left abandoned for a long time. Today, the shop sells a wide selection of pottery, traditional dining tables, clothing made with naturally dyed fabric and other accessories. It is only open on weekends. Check with Se:Gan before planning a visit. 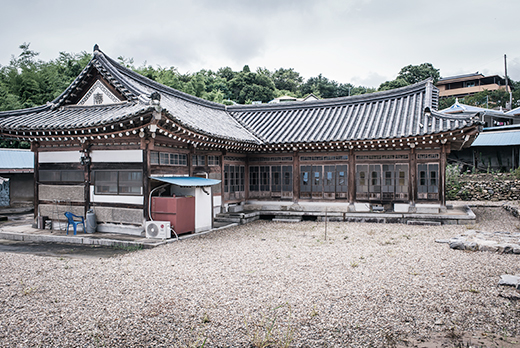 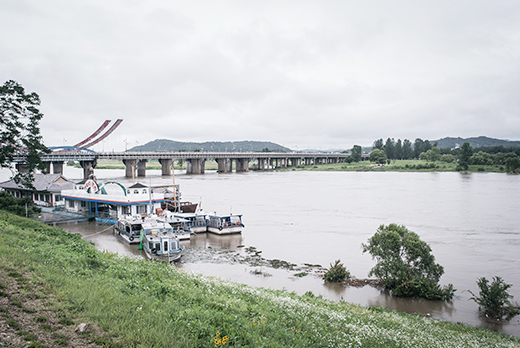 Gyuam Ferry on a rainy day

‘Spring Again,’ which serves pastries and brunch, ‘Yiandang,’ a hanok-style inn, and Gyuam Ferry are other attractions. 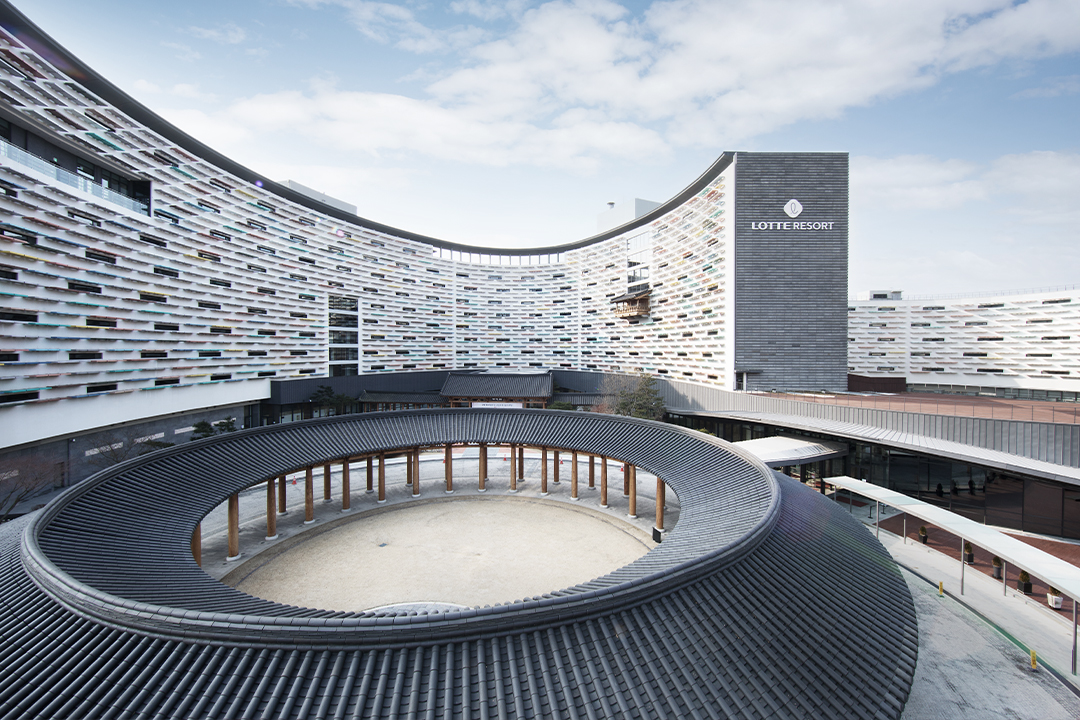 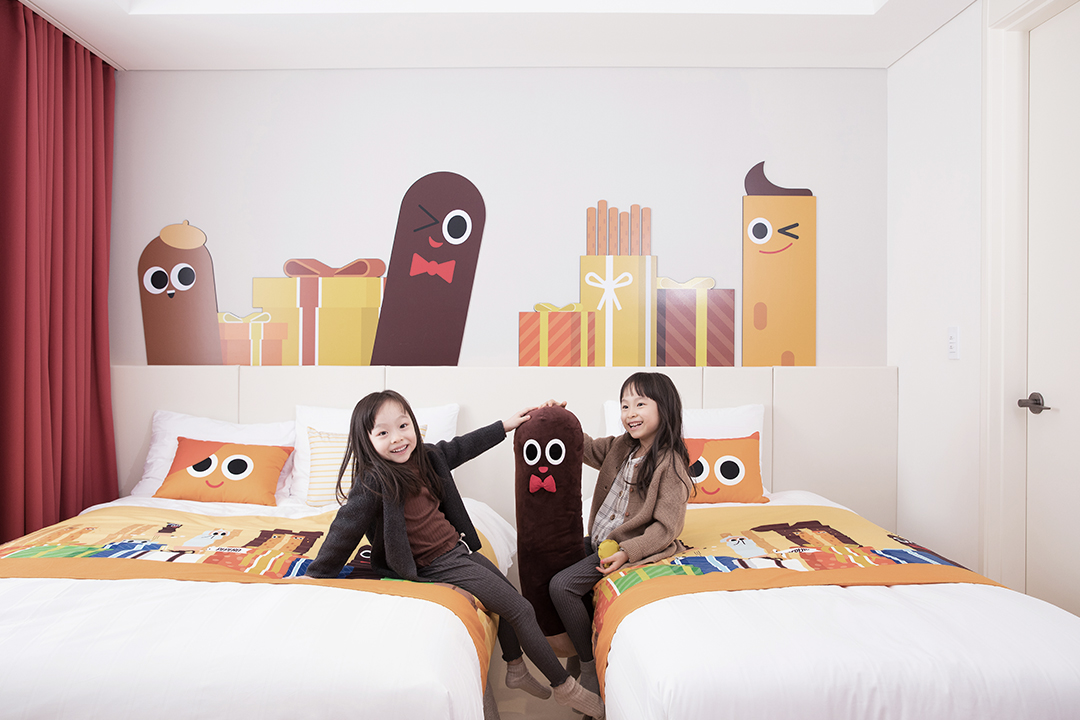 Where to Stay in Buyeo: LOTTE RESORT BUYEO
LOTTE RESORT BUYEO is the leading resort in Buyeo, standing 10 stories high with another basement floor and operating 310 rooms. The horseshoe-shaped building features some 300 panels on the outside, with a mix of colors easily seen in Korean landscape. The resort at night, in its gorgeous glory, is often captured for social media consumption. It’s a great spot for families, with history- and culture-themed tours, leisure activities, R&R and golf all available.