A Perfect Day Starts with Service
The Executive Tower, a landmark building of LOTTE HOTEL SEOUL, is celebrating its second anniversary. Let’s go over the class and value of the Executive Tower that has won the top spot in Korean hotel industry with its ultimate service.
Best-Ever Gift from Hotel
What is the ultimate hotel service? People do not keep score when they receive the highest-quality service. Instead, they make remarks on their hotel experience, saying “It was impressive indeed.” A welcoming grin on the face of the doorman when you enter the hotel, a graceful reception at the front desk, and the pride and professionalism felt at the hotel restaurants and facilities all have to sync perfectly to touch the customer’s heart.

In July, LOTTE HOTEL SEOUL Executive Tower ranked No. 1 in Travelers’ Choice for the first half of 2020 on the world’s largest travel platform ‘Tripadvisor.’ It would not be an exaggeration that the top spot was expected of the Executive Tower. The true value of the Executive Tower with its classy, luxurious rooms and suites, restaurants led by internationally-acclaimed chefs, and distinctive hotel services has already been acknowledged at home and abroad. 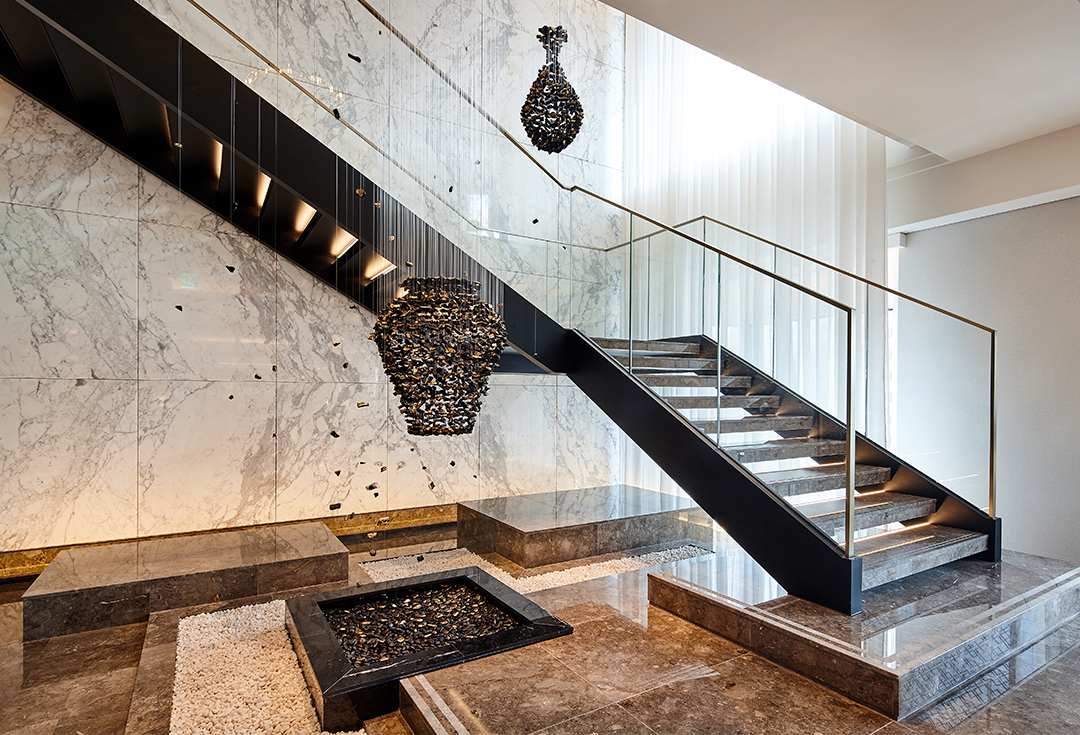 Quintessential Contemporary Classic
Opened on September 1, 2018, LOTTE HOTEL SEOUL Executive Tower inherits the historic legacy and significance of LOTTE HOTEL SEOUL. Unlike other hotels that add more rooms through renovation, the Executive Tower took an unprecedented step, reducing the number of rooms from 373 to 278. The strategic move by LOTTE HOTEL choosing quality over quantity and class over scale has brought about a new trend of ‘K-Luxury Hotel’ to the hotel industry in Korea. 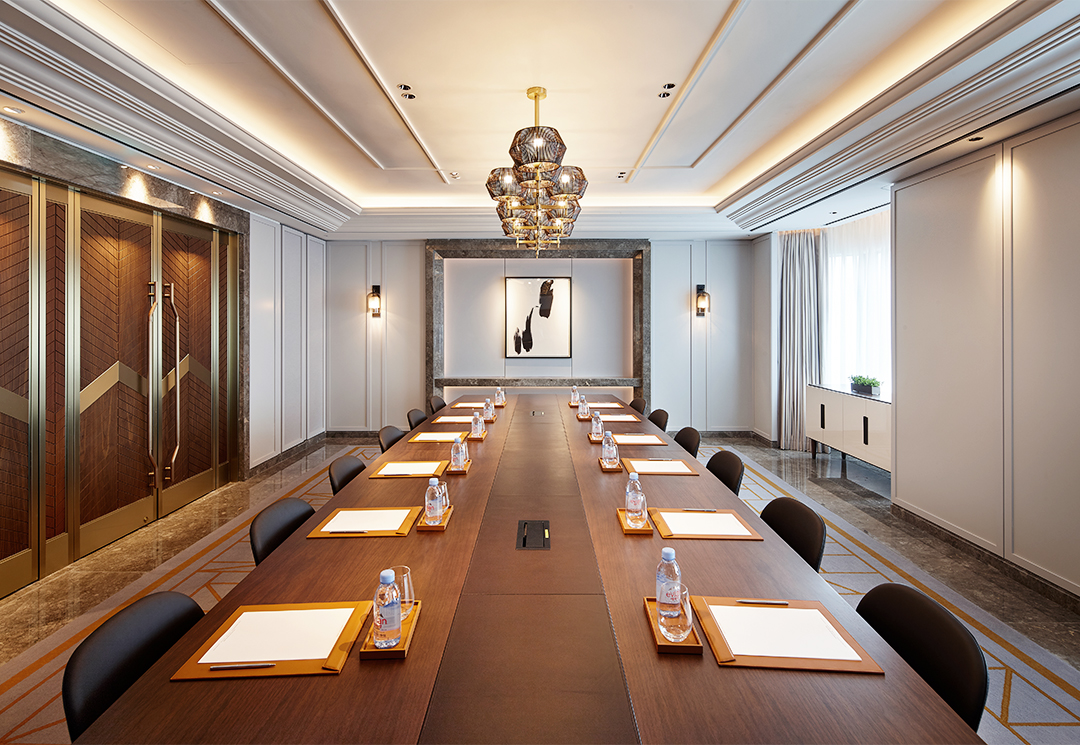 Meeting Room at the Executive Tower 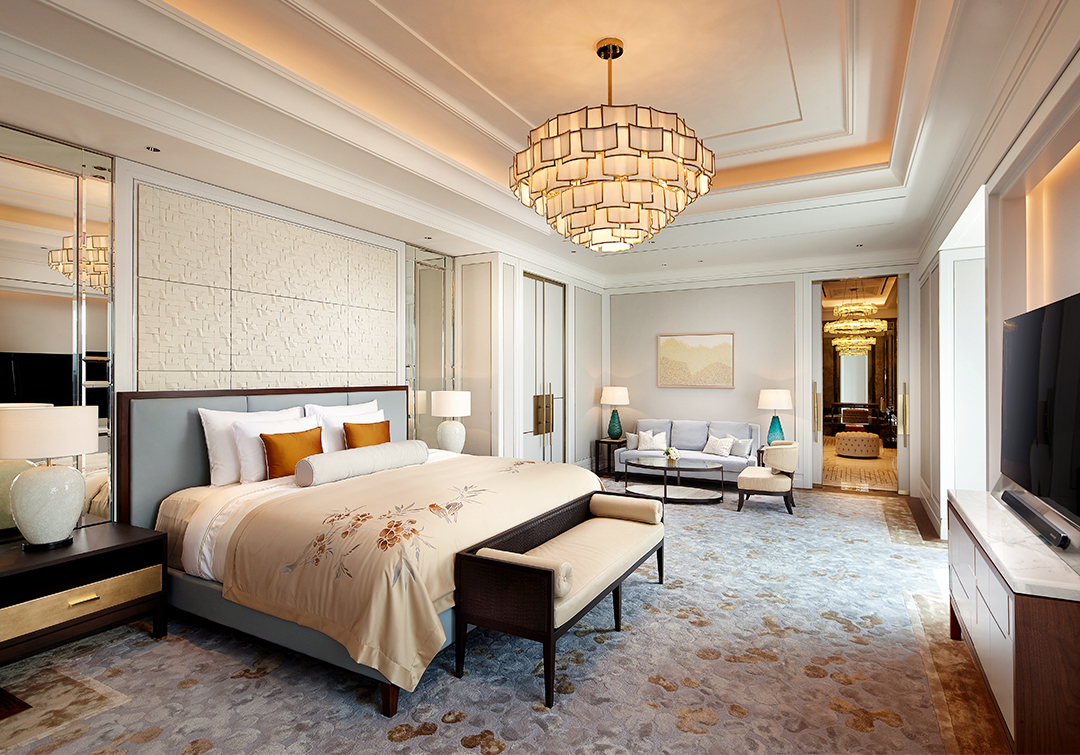 Royal Suite at the Executive Tower

Next, let’s focus on the interiors of individual rooms and suites. There are 102 Grand Deluxe Rooms, 48 Premier Rooms, 75 Executive Tower Rooms, and 53 Suites to choose from per your needs and preferences. All rooms and suites are equipped with a super premium bedding system titled ‘Beautyrest The One,’ co-developed with Simmons Bedding Company. In suites, for the first time among LOTTE HOTEL locations, a new-concept clothing care system ‘Styler’ is installed. To top it off, the Royal Suite, the largest suite in Korea with a 460.8㎡(139.4 pyeong) space, is the epitome of luxuriousness after 4.1 billion won was spent in decorating the single space. This ultra-fancy suite adopted ‘Beautyrest Black’ which is the highest-graded mattress by Simmons, for the best sleep ever. 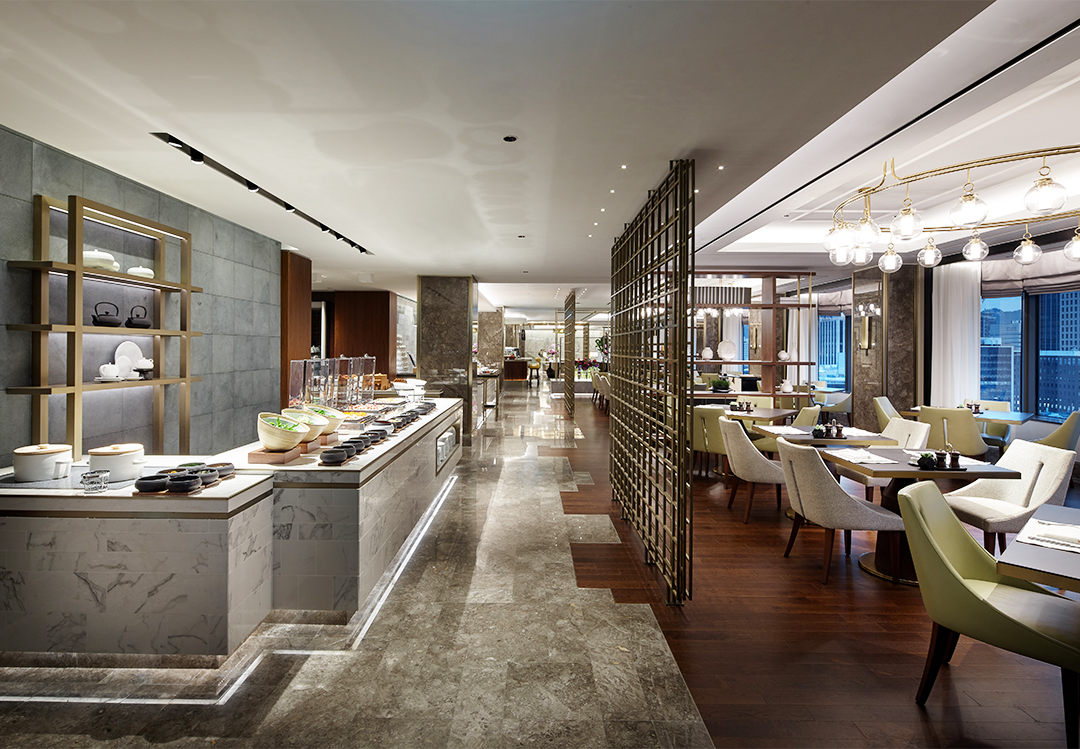 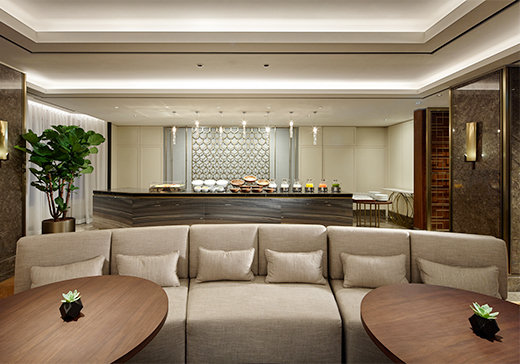 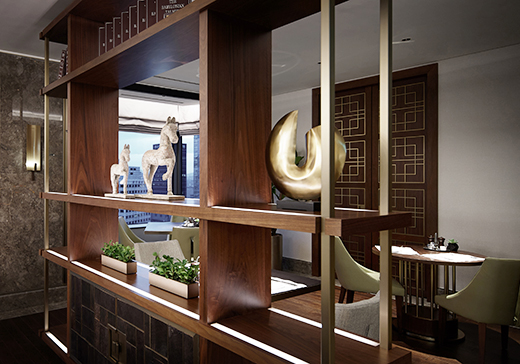 Le Salon, the luxurious lounge at the Executive Tower

Special Breakfast by 3-Michelin-Starred Chef
The unrivaled service continues in other facilities. LOTTE HOTEL SEOUL Executive Tower is also famous for the largest club lounge in Korea. Le Salon is an exclusive lounge on the 16th floor for Executive Tower guests. With the Sky Lobby downstairs, the club provides a traditional yet modern, comfortable atmosphere using Korean-style patterns as design motifs.

At Le Salon, diverse dining options are available, including breakfast, afternoon tea, and Happy Hour. Its breakfast buffet in particular is noted for its superior quality. Along with French premium tea from ‘Dammann Frères,’ the buffet serves colorful cuisines including egg benedict, sea bass dish, and fresh seasonal fruits, ensuring customer satisfaction. In addition, government-certified master chef from Italy, Sebastiano Giangregorio, with over 30 years of cooking experience under his belt including the work at the three Michelin-starred restaurant ‘La Pergola,’ makes amazing waffles, a signature Le Salon breakfast menu. 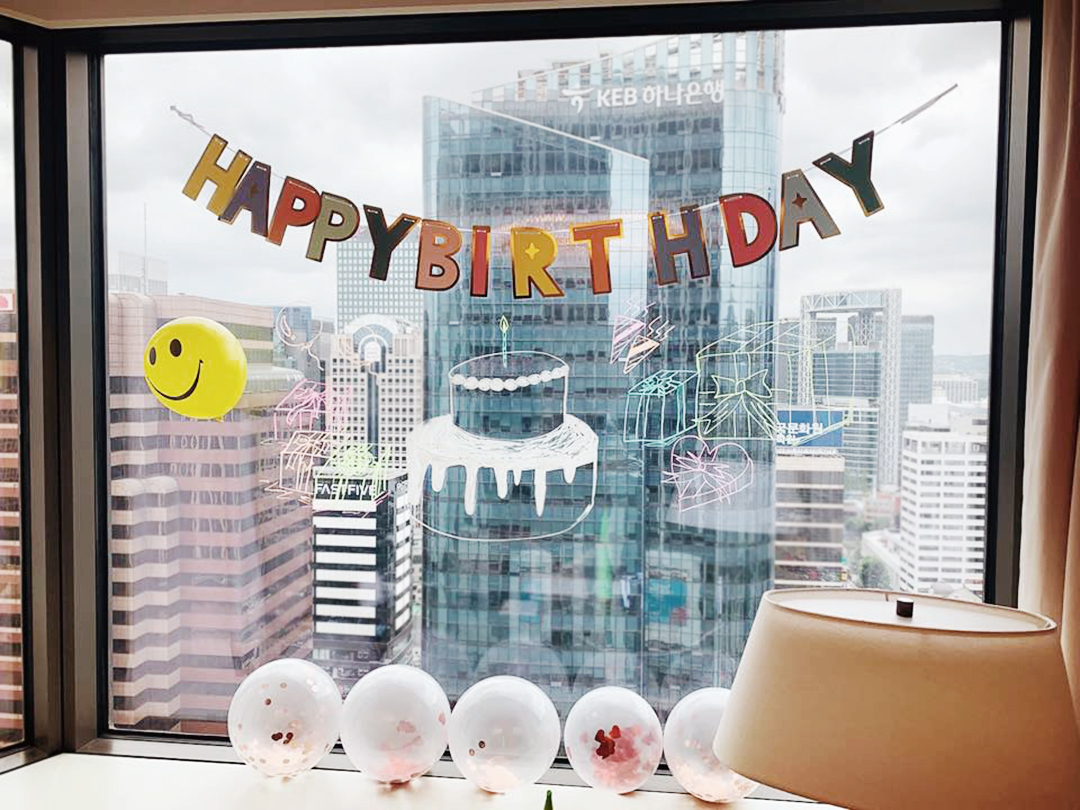 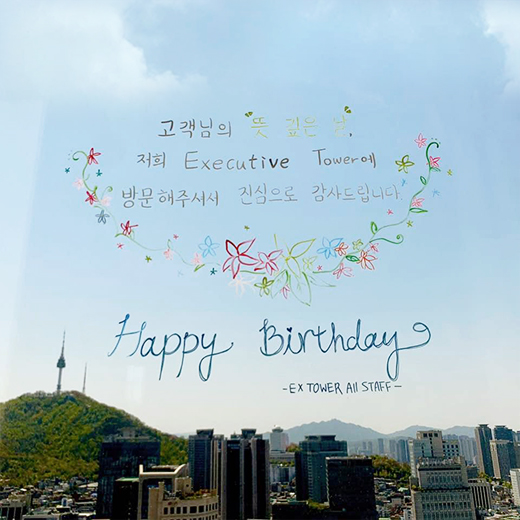 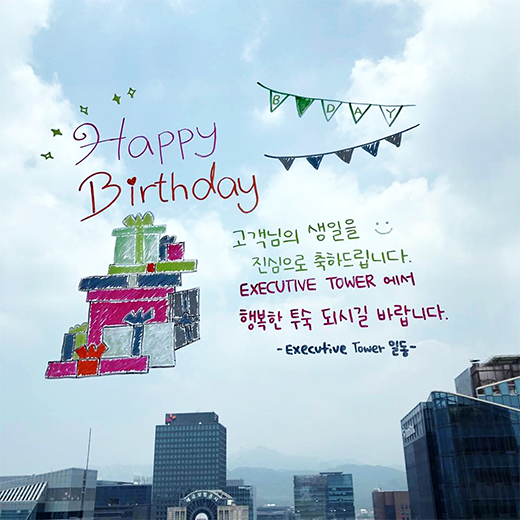 The hotel’s latest ‘Drawing Service,’ a surprise event for those who are celebrating a special day, is also gaining popularity. LOTTE HOTEL SEOUL staff would leave warm-hearted, congratulatory messages and cute drawings on the window of the room for the guests who are visiting the hotel on their birthday or anniversaries. The preparation for this service takes a lot of time and effort, but the staff gladly participates in the event hoping to make the stay at LOTTE HOTEL SEOUL most memorable for the guests. 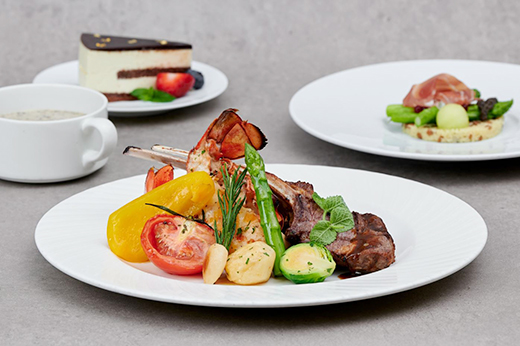 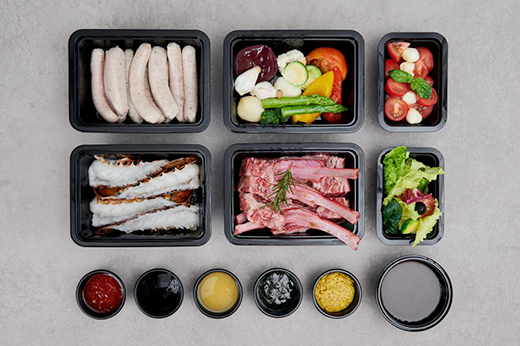 ‘Untact’ Era, New Services
With reduced chances of overseas traveling due to the COVID-19 pandemic, many people have turned to ‘staycation’ where you relax at a hotel in the country. The latest decision by LOTTE HOTEL SEOUL to allow children in ‘Le Salon’ for a limited time period is being supported by the hotel guests who are traveling with their families.

In addition, the ‘Drive-Thru’ service, which was adopted for the first time by LOTTE HOTEL in Korean hotel industry, offers a wider range of choices now. The existing Signature Collection Box and Momoyama Lunch Box are still popular. Added to the menu are Fine Dining Course Meal, Camping Package, and ‘Honsul’ Set, all available until the end of the year. The Camping Package allows you to enjoy the premium hotel menu during outdoor activities, while the Fine Dining Course Meal lets you have five-star hotel food more comfortably at home. The Honsul Set designed for those who like drinking alone comes with a selected wine and snack food, which will hopefully cheer you up during your downtime in the Coronavirus age. You can contact LOTTE HOTEL SEOUL through its website or via telephone, or via Naver Booking to order a Drive-Thru menu.

“We strive to become the best hoteliers that inspire our guests.” LOTTE HOTEL’s service philosophy has always emphasized dedication, trust, and passion. Based on its focus on guest care and consideration as well as professionalism, LOTTE HOTELS & RESORTS have thus spread the culture of service among Korean hotels and its 13 global locations. LOTTE HOTEL SEOUL Executive Tower has humble plans as it marks the second anniversary. Stay a step ahead of its guests and offer them a big smile to make their day at the hotel perfect. Going forward, that’s the only principle it will abide by. 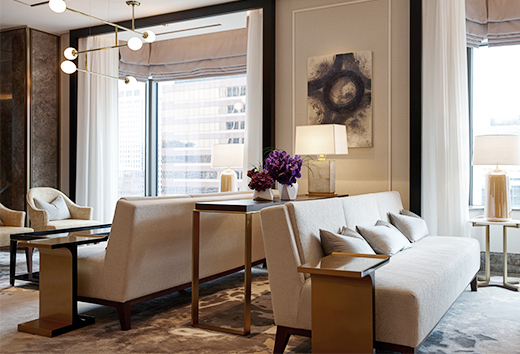 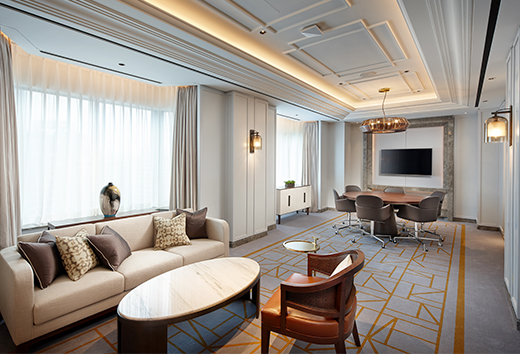