World’s Most Exciting Steps
Considered the dream trek among backpackers around the world, the Pacific Crest Trail is one of the top three thru-hike trails in America that stretches about 4,300km from Mexico to Canada, crossing California, Oregon, and Washington. Known as ‘dudububu’ in Korea, Yang Heejong and Lee Haneul are a married couple who have completed hiking the top three trails, and they wrote about their amazing journey on the Pacific Crest Trail.
Big, Beautiful Adventure
The Pacific Crest Trail(PCT) is a hiking trail connecting the crests of the mountains along the West Coast in the United States. Starting in the city of Campo by the U.S. border with Mexico, the trail covers nearly 4,300km through the states of California, Oregon and Washington, ending at Monument 78 by the U.S.-Canada border. The 2014 film ‘Wild’ starring Reese Witherspoon introduced the long-distance trail to Koreans. 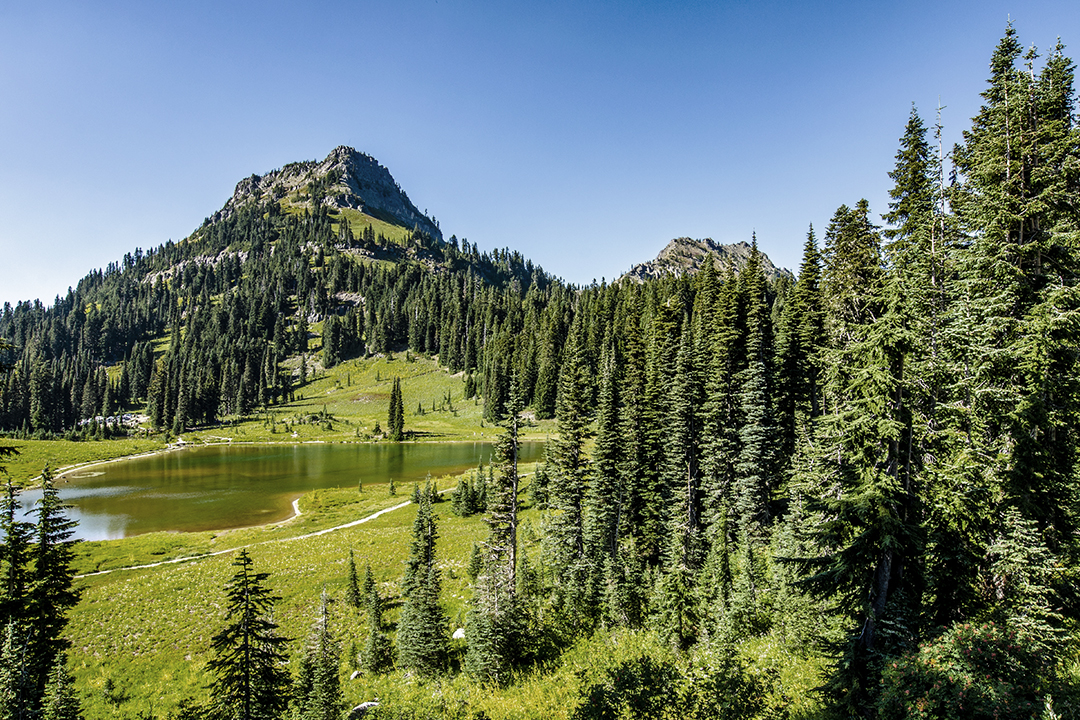 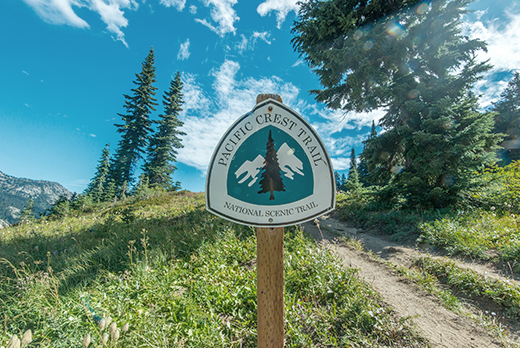 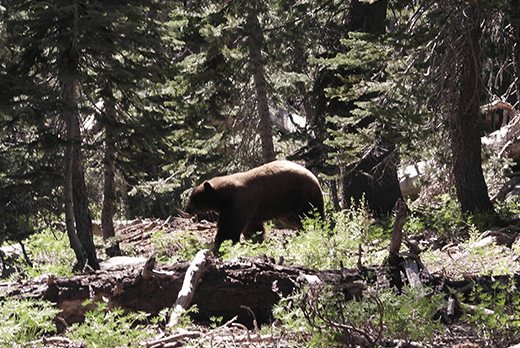 While on the trail, you’re bound to run into bears or other wild animals.

You will be somewhat embarrassed if you are thinking of better-known walking trails such as the Camino de Santiago, Jirisan Dule-gil, and Jeju Olle-gil because the PCT uses the word trail in the name. To hike any section of PCT, you need a large backpack filled with camping gears for the nighttime and at least four to five days worth of food and water to last you between the towns on the trail. In California, you will cross the Mojave Desert in the scorching heat of up to 40 degrees Celsius, and climb the 4,000m-high Sierra Nevada mountain ranges covered in waist-deep snow. On top of it, you could encounter wildlife such as a bear, elk, fox, and rattlesnake, and will be on your own in potentially dangerous situations.
It’s still too early to give up on your dream to explore the PCT. Many people have ventured on the trail over the period of half a century, and quite a few of them are supporting the fellow hikers one way or another. A unique hiking culture has been formed with the introduction of new terms such as ‘trail magic’ and ‘trail angel’ which describe long-distance hikers lending support to each other on the trail. These acts of comradery encourage and enable thousands of backpackers to visit the PCT each year.
As the expression “Hike your own hike” says, the act of hiking is carried out not to show off to others or achieve their acknowledgement, but to bring self-satisfaction to the hiker. 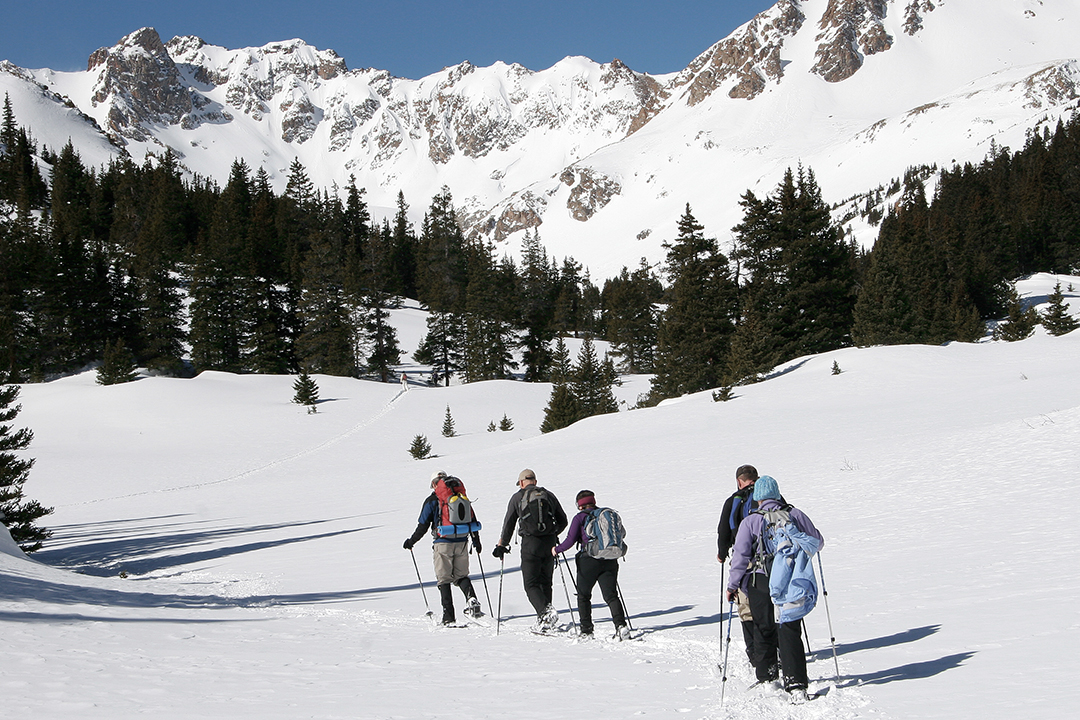 Long-Distance Trail Culture in America
Along with the PCT, there are two other trails that make up the top three thru-hike trails of the United States. One is the Continental Divide Trail(CDT) and the other is the Appalachian Trail(AT). The CDT is a 5,000km-long trail following the Continental Divide of the Americas in the Midwest. It is similar to Korea’s Baekdudaegan. The Appalachian Trail in the East stretches over 3,000km along the Appalachian Mountains where the U.S. history began. Chronologically, the AT was built about 80 years ago as the first long-distance trail in America, and the PCT and CDT followed suit in that order. 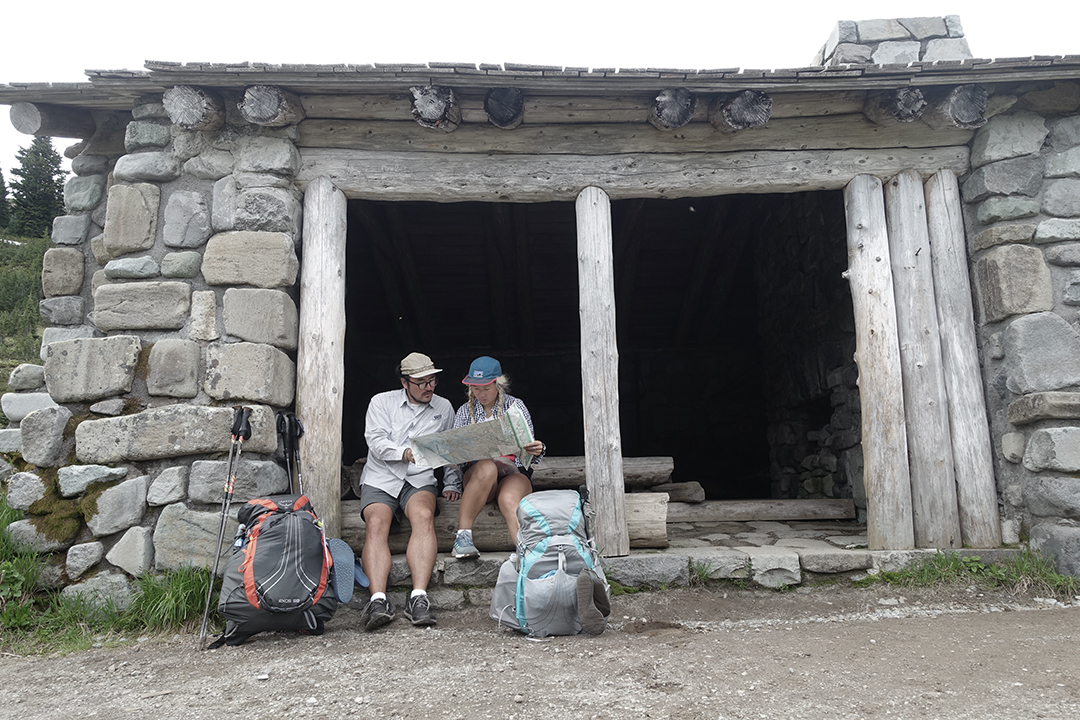 Dudububu studying the map while on the Mount Rainier course

For those who’ve completed all three trails of the PCT, CDT, and AT, also known as the ‘Triple Crown of Hiking,’ an honorary title of ‘Triple Crowner’ is given. The American Long Distance Hiking Association-West(ALDHA-WEST) recognizes this hiking feat that most thru-hikers consider their lifelong dream. What is peculiar about the ALDHA-WEST title is that the organization does not check if the hiker has actually finished trekking the three trails. The hiker submits a few photographs and the hiking dates to apply for the recognition, but there is no double-checking process. This honor system works because among thru-hikers, it is often stressed that, as the expression “Hike your own hike” says, the act of hiking is carried out not to show off to others or achieve their acknowledgement, but to bring self-satisfaction to the hiker. 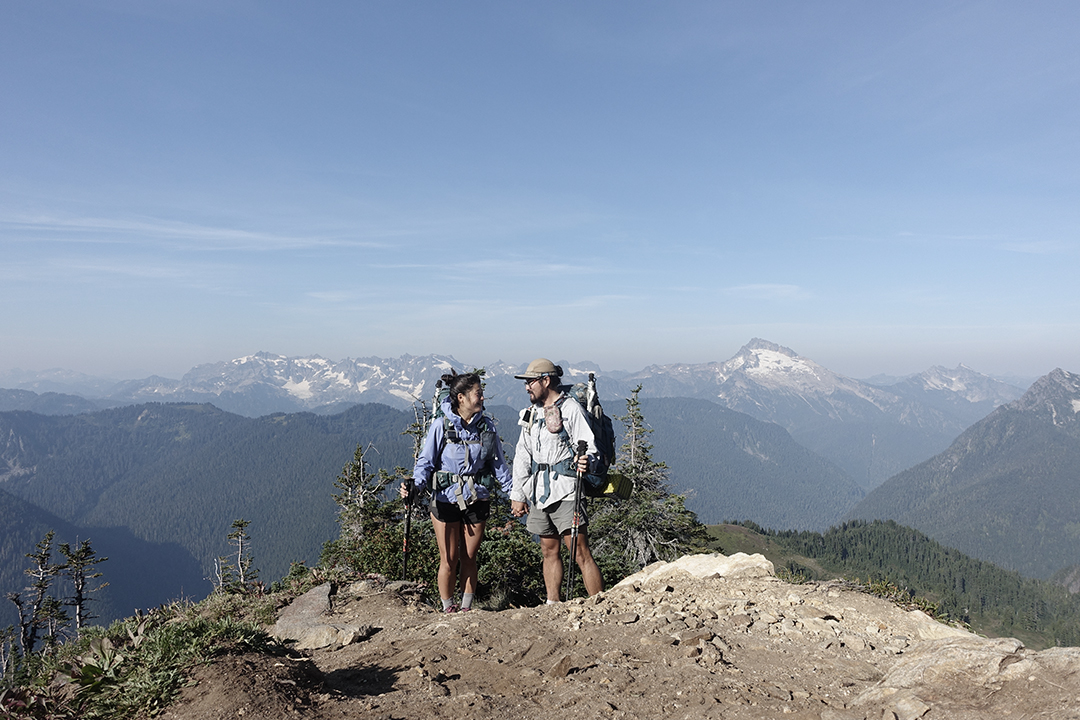 For Dudububu, being on the trail is akin to taking a long honeymoon.

We are a married couple known by the nickname ‘Dudububu’ in Korea. We got married on top of Mount Whitney, the tallest mountain in the contiguous United States, in June 2016 and have been on a walking honeymoon around the globe since then. Husband Yang Heejong completed the PCT in 2015, the CDT in 2016, and the AT in 2017, achieving the Triple Crown. Wife Lee Haneul hiked the Wyoming, Idaho, and Montana sections on the CDT after getting married in 2016, the AT in 2017, the PCT in 2018, and the remaining Colorado and New Mexico sections on the CDT in 2019. They are the first Korean married couple to be recognized as Hiking Triple Crowners. 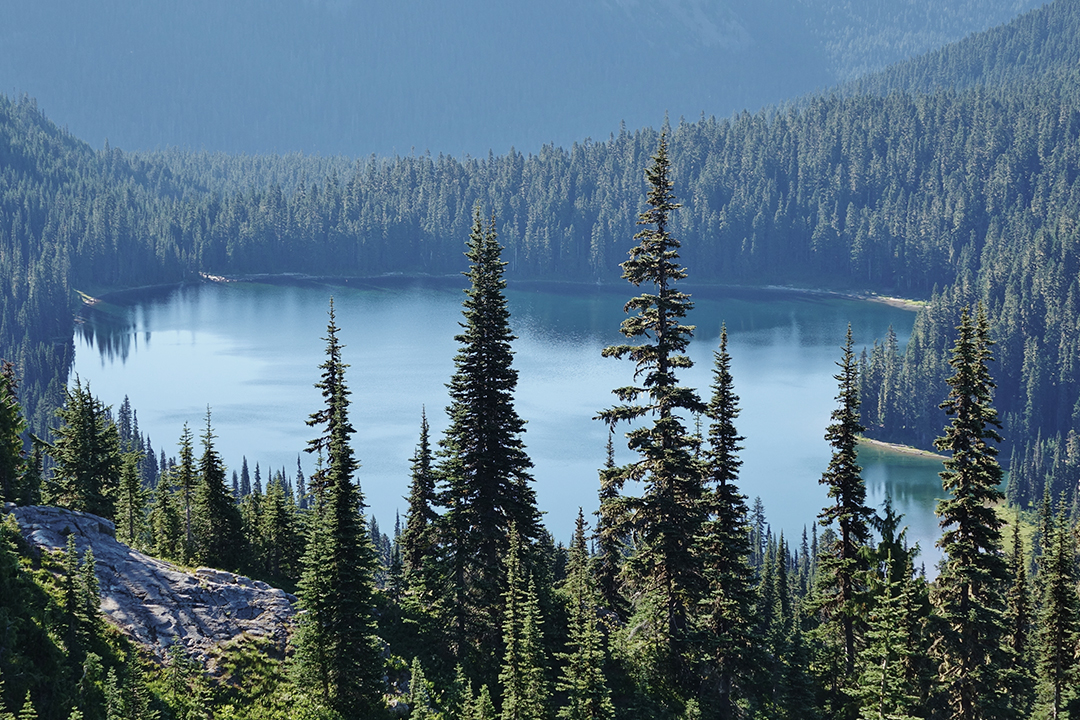 View of the Dewey Lake from the Naches Peak © shutterstock 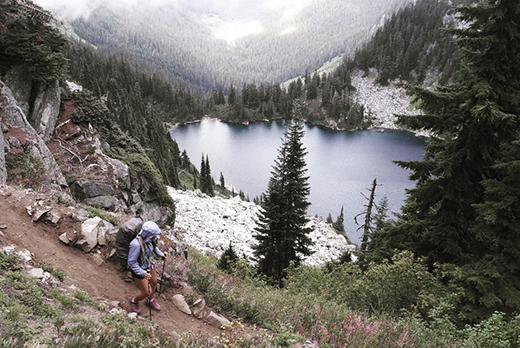 The trail is a constant series of ascension and descension routes. 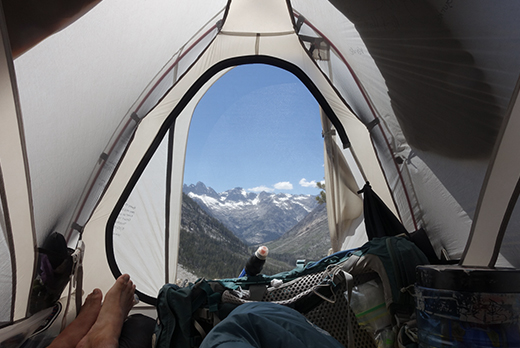 View of the Sierra Highlands from the tent

PCT and Mesmerizing Washington Section
The most famous sections on the PCT may be the Sierras known for the John Muir Trail and Yosemite National Park. They are stunningly beautiful but we personally like and recommend the Washington section if anyone asks for our advice. Being the last leg of the journey, Washington is located in the northwestern corner of the United States. Seattle, the birthplace of Starbucks Coffee, is in Washington.
We recommend the Washington sections on the PCT because of the beautiful trail and the surrounding environment and also because so many hidden gems of locations are concentrated there. Our favorite is Goat Rocks Wilderness. Unlike the Sierras in California, it is not crowded or complicated, and the 360-degree panoramic view from the Goat Rocks ridge is more breathtaking than any of the scenes we’ve come across on our tour around the world. The wilderness area is located on the Cascade Range involving several volcanic peaks. If you stand on the highest point, you will see snow-covered mountain tops shooting up through the white clouds. You may feel momentarily like a mountain spirit walking on a cloud as you gaze at Mount Rainier with its permanent snowfields and glaciers. 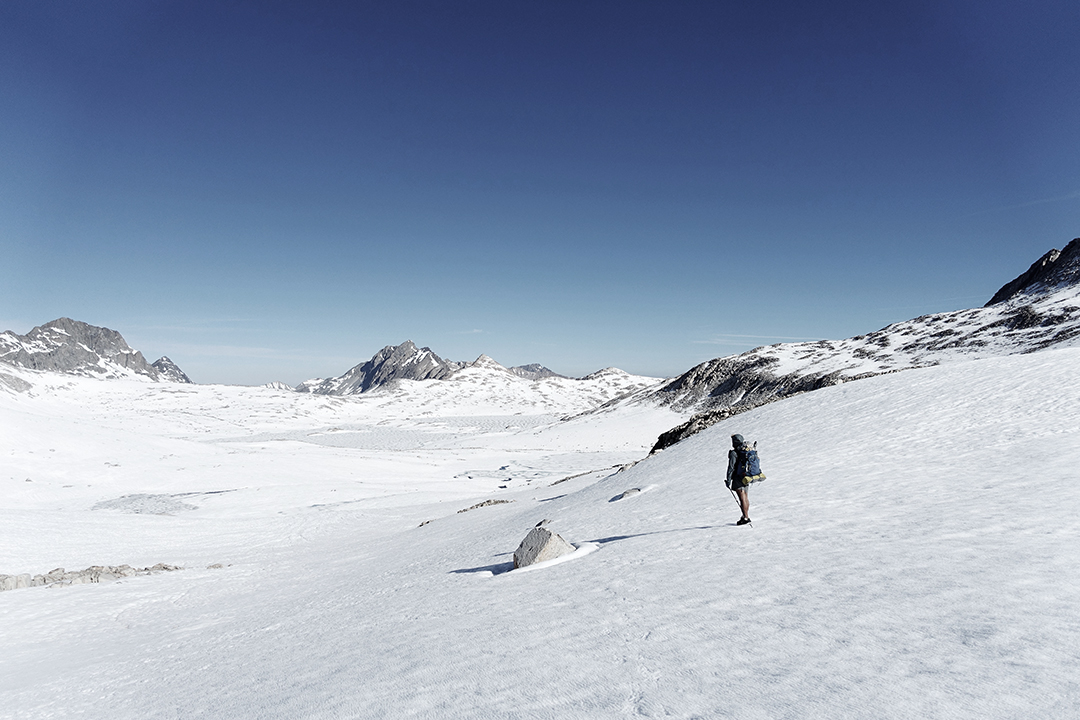 Dudububu walking on the snowy track of the Muir Pass

Different from the Sierras which belong to the National Park system, the Washington sections have ski resorts or lodgings near the trail, making it easier to get a resupply of food during the hike. There are also more opportunities to look around small cities or towns and enjoy the unique American culture. Finally, a visit to Seattle where coffee, books, music, and art offer a quality break from all the hiking makes Washington our top choice among the PCT sections. 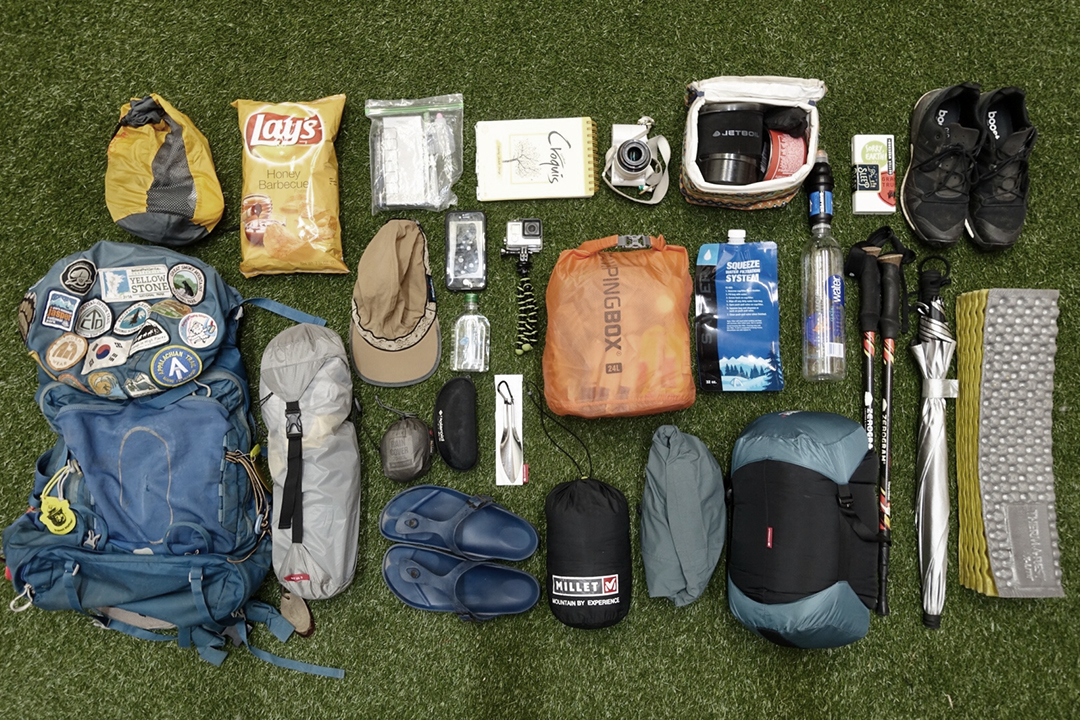 Let’s Get Ready. Preparations for PCT Adventure
1. Apply for Long-Term Stay U.S. Visa
It takes about six months to walk 4,300km in total. You have to prepare a U.S. visa that allows a stay of longer than three months. Non-U.S. citizens can apply for a B1/B2 tourist visa at the U.S. Embassy for a fee for a stay of up to six months. You need to get an issue of PCT permits from the Pacific Crest Trail Association(PCTA) in advance. Applications are accepted in October and in January. The number of applicants are limited to 50 per day in order to preserve the trail and surrounding natural environment. (Unfortunately, the 2021 permits are indefinitely on hold due to the Covid-19 situation.)

2. Confirm Transportation to Departure Point
Look for public transport to your departure point. Long-distance trails have two departure points depending on where you’re headed. You can either go northbound or southbound. For a northbound trip, you enter the country via Los Angeles, go to San Diego and then to Campo. For a southbound option, Monument 78 is not accessible by car. You need to get to nearby Harts Pass road and, from there, hike to Monument 78 where the trail unfolds.
3. Gears and Mind-Body Preparation
Make sure you prioritize safety in choosing essential equipment and gears. As long as safety rules are abided by, you can choose any equipment that suits you. If you already have some, use them. We recommend you buy necessary items once you are in the United States. The range of options is far greater and some are more affordable there. If need be, locally-purchased items can be exchanged or refunded.