For Your Romantic and Elegant Getaway, LOTTE HOTEL SEATTLE
LOTTE HOTEL has finally made its way to Seattle. With its existing Guam and New York locations, the opening of LOTTE HOTEL SEATTLE signifies LOTTE HOTELS & RESORTS has successfully established business presence across the American continent.
Charming Seattle
The largest city in Pacific Northwest, Seattle is full of attractive aspects for travelers. Known to Koreans through the film and Starbucks Coffee, the city has so many features that make it a desirable travel destination that it was selected as one of the best cities to visit in 2019 by travel magazine 'Lonely Planet.' With over 480 parks within the city boundary, it maintains a high ratio of green space.
Seattle is considered a mecca for various genres. For hikers and mountain-climbers, it is famous for its trekking-friendly environment such as North Cascade National Park and Mount Rainier. It is also well-known as the birthplace of franchise culture represented by Starbucks Coffee. To rock music fans, it is the hometown of legendary guitarist Jimi Hendrix and alternative rock. Wines produced in the Woodinville vineyards near the city are on the ‘must-drink’ list of many wine lovers. Some even joke that it is the only city that sells Fish & Chips better-tasting than the British original version. 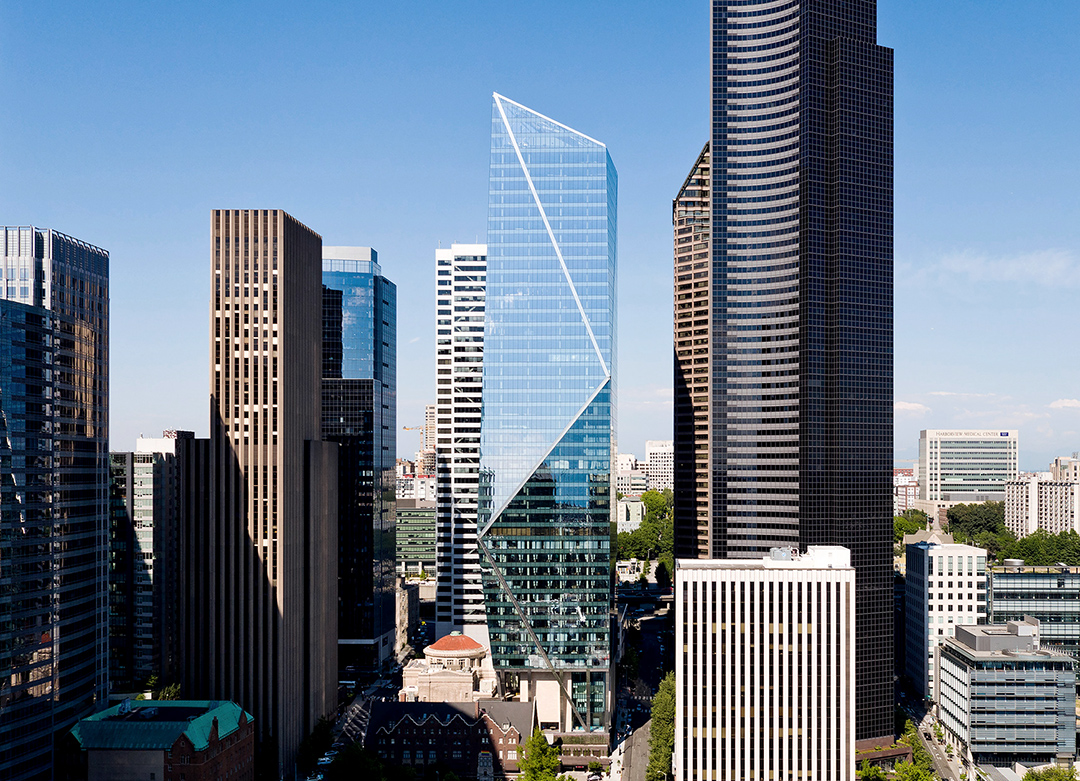 LOTTE HOTEL SEATTLE is covered entirely in glass, with the façade reflecting the building’s surroundings. 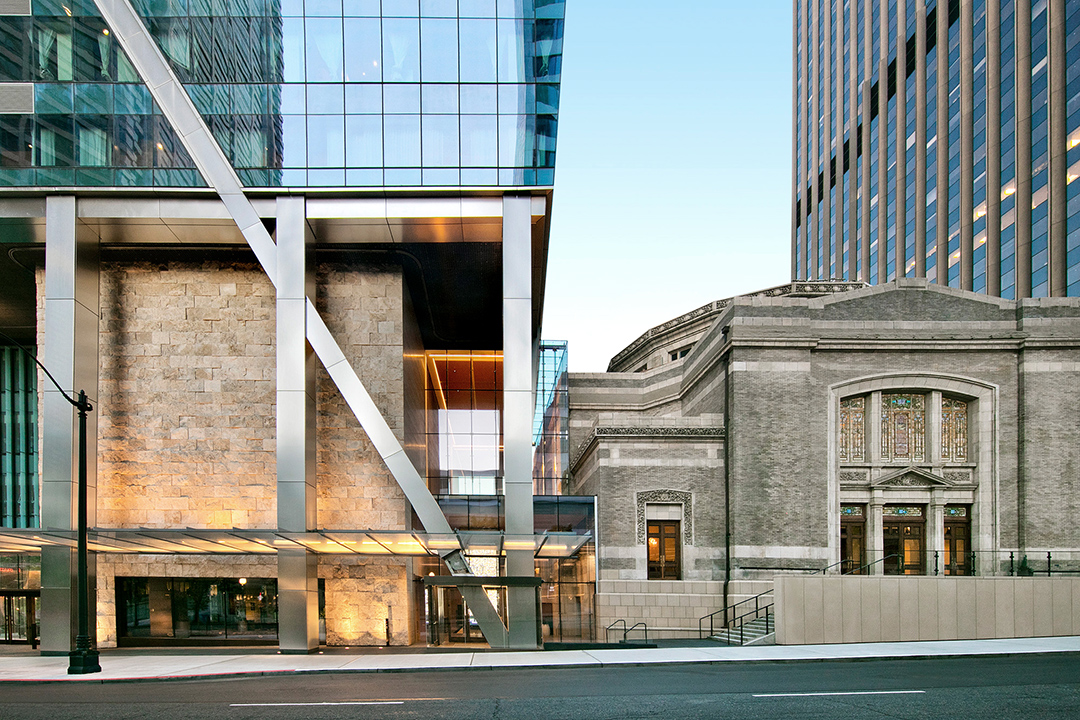 The hotel and the Sanctuary are connected.

LOTTE HOTEL Crosses America
LOTTE HOTEL Seattle made a debut in America’s largest northwestern metropolis on September 24. It is the 12th overseas operation by LOTTE HOTELS & RESORTS, and the third flagship in the United States including Guam. Having opened LOTTE HOTEL MOSCOW in September 2010, this year marks the 10th anniversary since the hotel group’s foray into the global market. 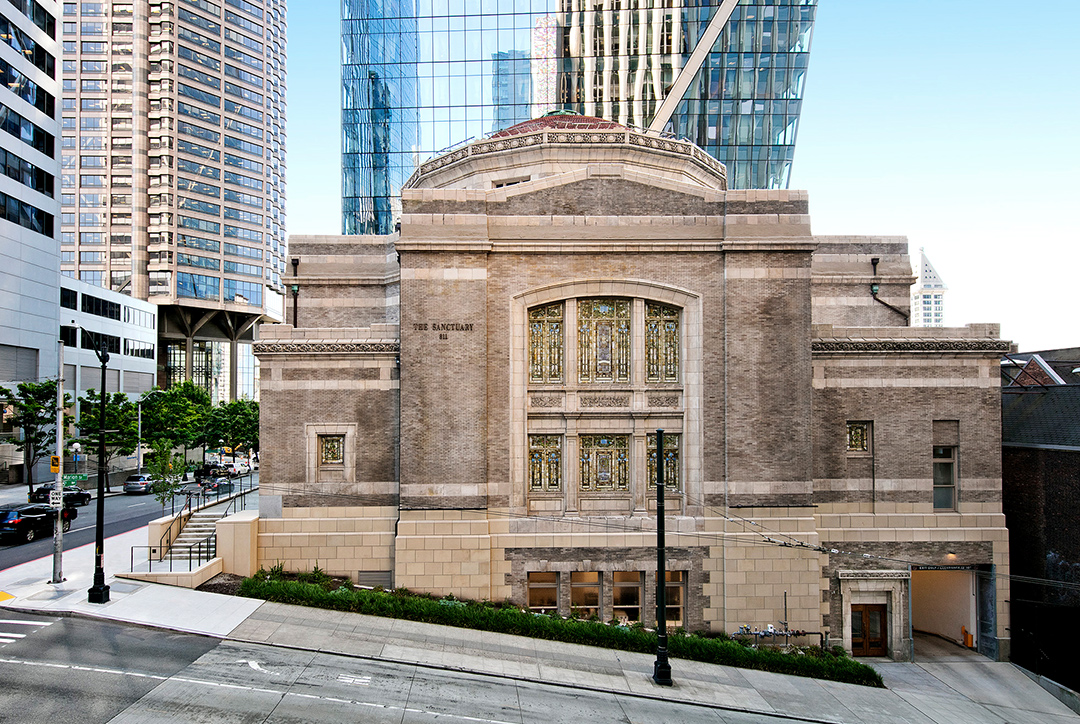 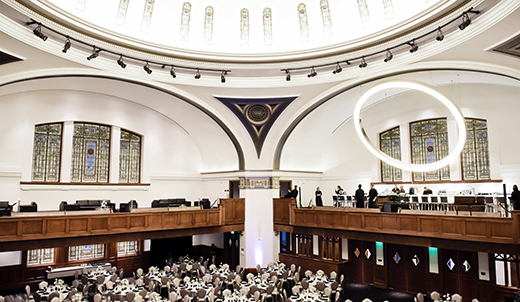 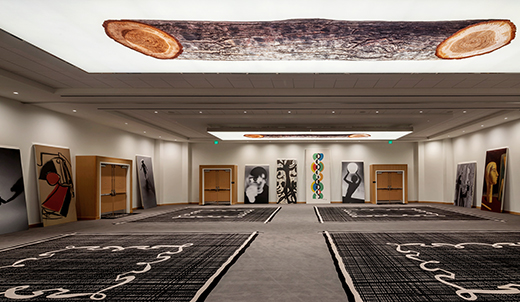 The building itself exudes so much history and culture.

As with LOTTE NEW YORK PALACE, LOTTE HOTEL SEATTLE also embraces the historic architecture in its location. The Sanctuary, a grand ballroom for large-scale banquets and conferences, was America’s first United Methodist Church built in 1908. The three-story structure has over a hundred years in history. The church relocated several years ago, leaving the historic space behind. It now serves as the wedding and convention center of LOTTE HOTEL SEATTLE.
The Sanctuary is considered one of the oldest Beaux-Arts architectures in America. Beaux-Arts is the architectural style taught at the École des Beaux-Arts in Paris in the mid-19th century. The style became popular in the United States as wealthy American entrepreneurs started building European-style houses. It is often found in the design of museums, libraries, and banks. 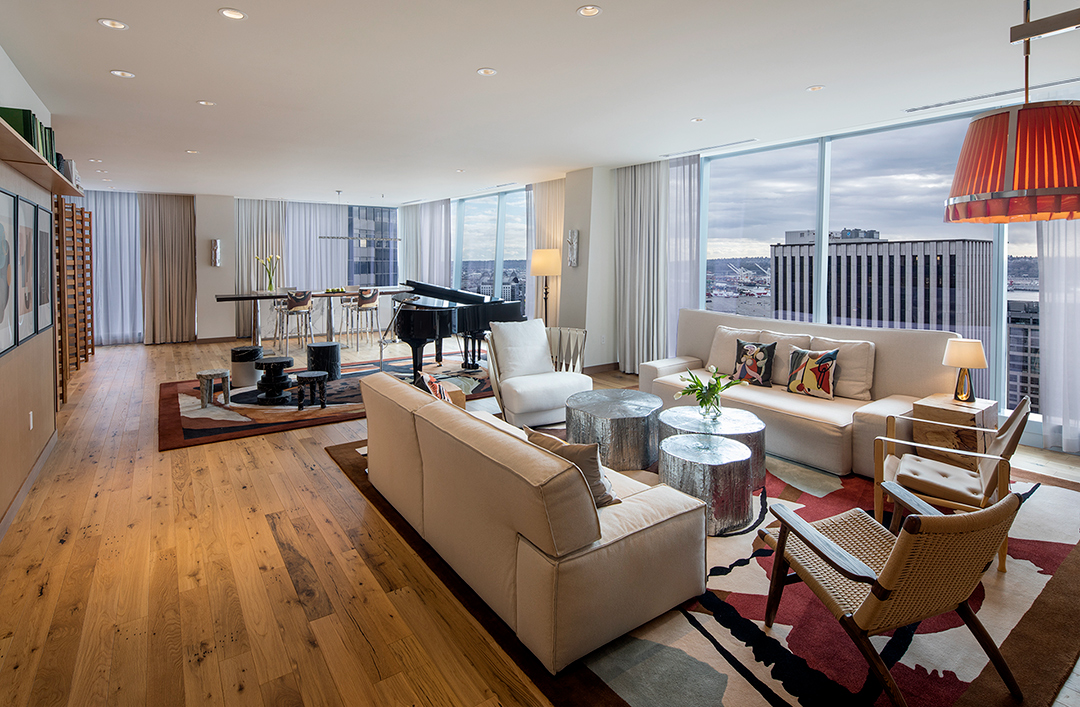 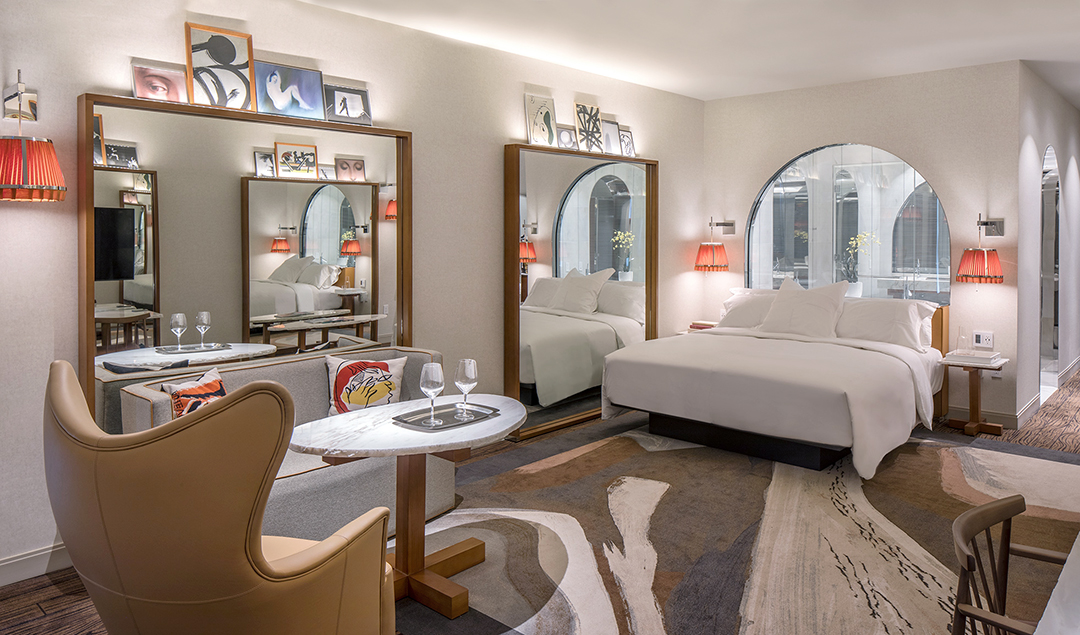 Modern Rooms and Thoughtful Service
The Sanctuary is connected to the highrise building where the rooms and restaurants of LOTTE HOTEL SEATTLE are housed. In the 44-story building, the hotel stretches from the first floor to the 16th. Covered entirely in glass, the building’s facade reflects the surroundings and sheds a light on the Seattle skyline.
A total of 189 rooms(including 33 suites) adopted a creative and modern design inspired by the beautiful landscape of the city. The rooms give off a bright and vibrant feel. Through large windows, the hotel guests can enjoy stunning ocean views and dynamic city moments. In addition, the hotel offers unique customer services, such as the mobile check-in service with a complimentary drink, the fragrance service of offering a spritz of perfume for the guests going out in the evening, and car services including valet parking and interior cleaning. LOTTE HOTEL’s superior Korean-style service, combined with the sensitivity that fills Seattle, will satisfy the guests. 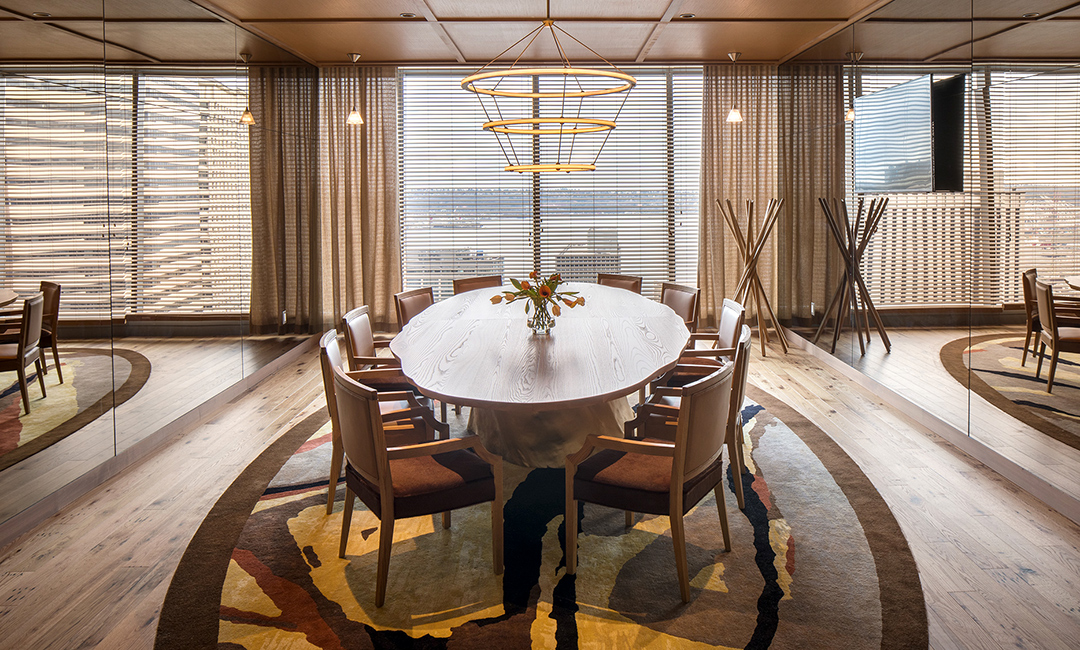 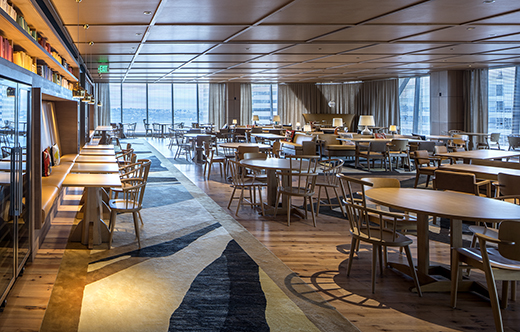 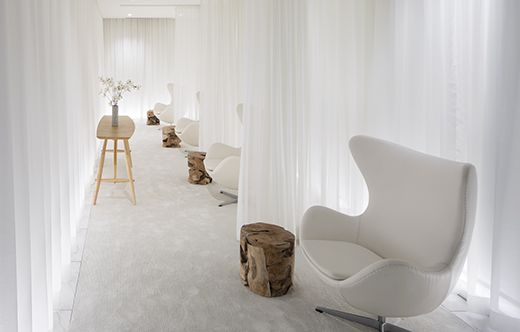 View of Charlotte Restaurant & Lounge and the spa

Delicacy and Relaxation in One Place
Located on the 16th floor of LOTTE HOTEL SEATTLE, Charlotte Restaurant & Lounge presents a view of the downtown along with the ocean and mountains, and a variety of contemporary dishes using fresh local ingredients.
The hotel spa is also unequaled. First-class spa brand ‘Biologique Recherche,’ which partners with Four Seasons and Peninsula hotels, ensures a comfortable and relaxing break. For the guests who are into workout, the latest equipment is placed in the hotel fitness club.
The location of LOTTE HOTEL SEATTLE on 5th Avenue in Midtown works for people with varied reasons for their visit to the Emerald City. For business travelers, global corporations such as Microsoft, Amazon, and Starbucks are headquartered in the city while Apple and Disney also have regional offices there. For tourists, the iconic Space Needle, Pioneer Square, and Seattle Waterfront are close by, making it easy for them to go on a city tour. 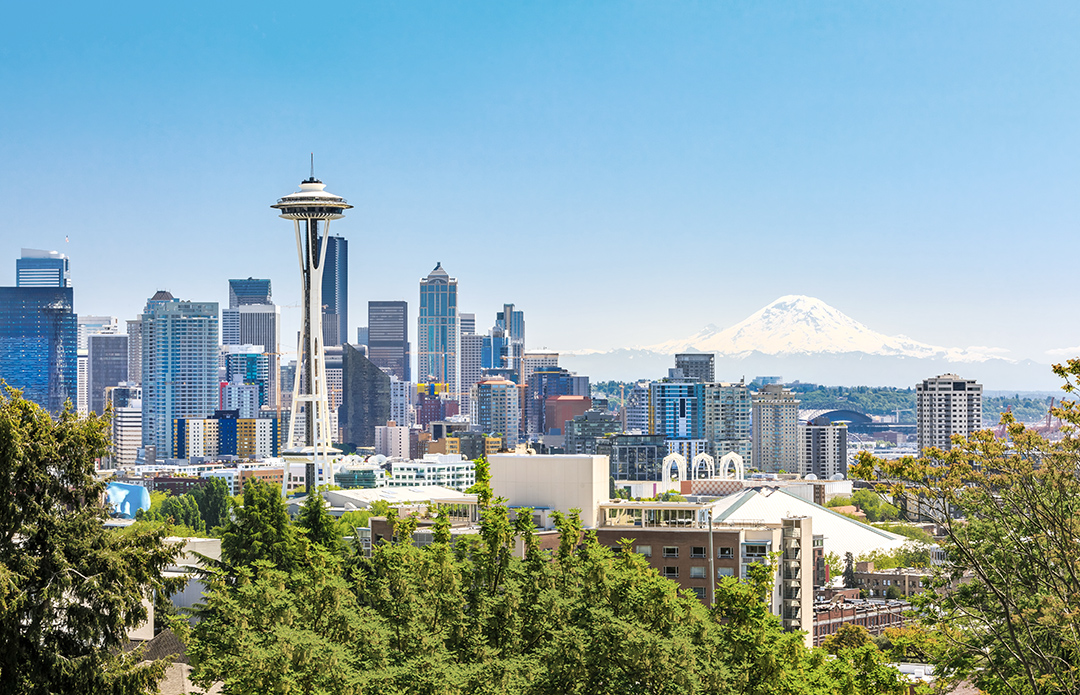 Space Needle
Seattle’s iconic observation tower and landmark. There are 25 lightning rods on the top of the structure. The disc-shaped viewing deck was inspired by a flying saucer. It is the best spot to have a 360-degree view of Seattle’s day and night, and is within 30-minute walk from LOTTE HOTEL SEATTLE. 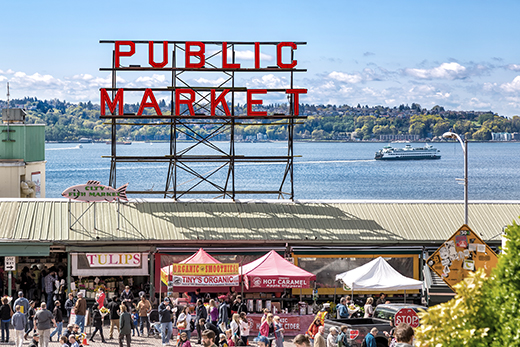 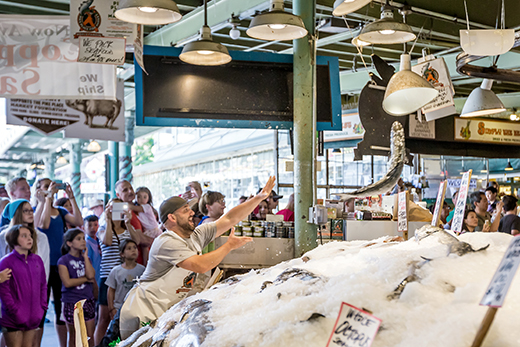 Seattle Waterfront and Pike Place Market
The Waterfront is one of the top tourist spots in Seattle, featuring souvenir shops and seafood restaurants located on the shore. Opened in 1907, Pike Place Market is the biggest marketplace in the city and the oldest in all of America. The so-called ‘Flying Fish’ event where employees throw fish around is famous. Situated in the Waterfront district, it takes 20 minutes to walk from LOTTE HOTEL SEATTLE. 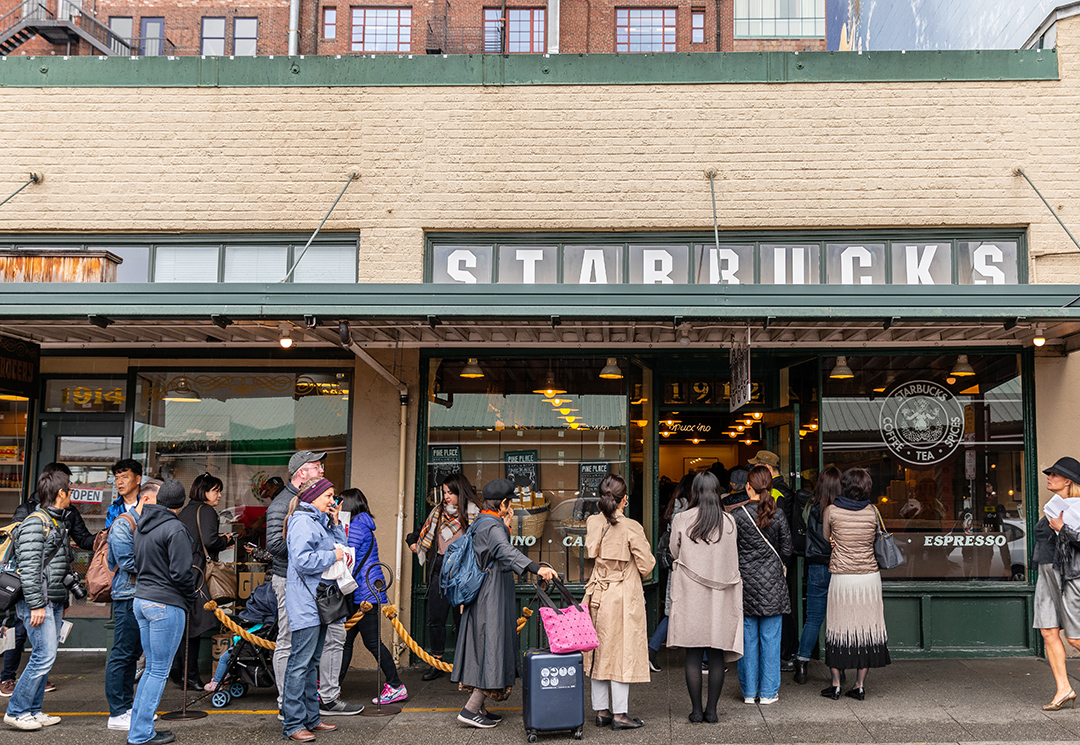 Original Starbucks
The first-ever Starbucks Coffee established in 1971 is a popular destination for Koreans and other nationalities as well. Always crowded with tourists, it is still an enjoyable experience just because you can see the original Starbucks building. It is near Pike Place Market, which is 20 minutes away from LOTTE HOTEL SEATTLE on foot.