[DAYTRIP] Ulsan, Rediscovering Its Culture and Delicacies
Ulsan is known as an industrial town. But is it really that bad of a travel destination? We went searching for places that you could visit with friends, lovers and family.
What would you do in Ulsan anyway, you ask? You’d be mistaken if you only regarded Ulsan as an industrial town. It’s a rare city where you can enjoy mountains, rivers and ocean altogether. The so-called Yeongnam Alps, famous for their gorgeous mountains and views, pass through Ulsan’s Ulju-gun. The Taehwa River, now cleaner than ever, cuts through the heart of Ulsan and flows into the East Sea. The history of Ulsan, with whales as the central figure, and the city’s cultural heritage also make for fascinating subjects.
Ulsan has seen a rise of new attractions. Ulsan natives who saw and learned different things in different places have come home and built spaces to share their rich cultural experiences with others. We enjoyed the nature and culture of Ulsan for one day, and then sampled different types of beverages the next day. There are enough to satisfy travelers of all ages. Go see Ulsan now, and be prepared to be surprised. 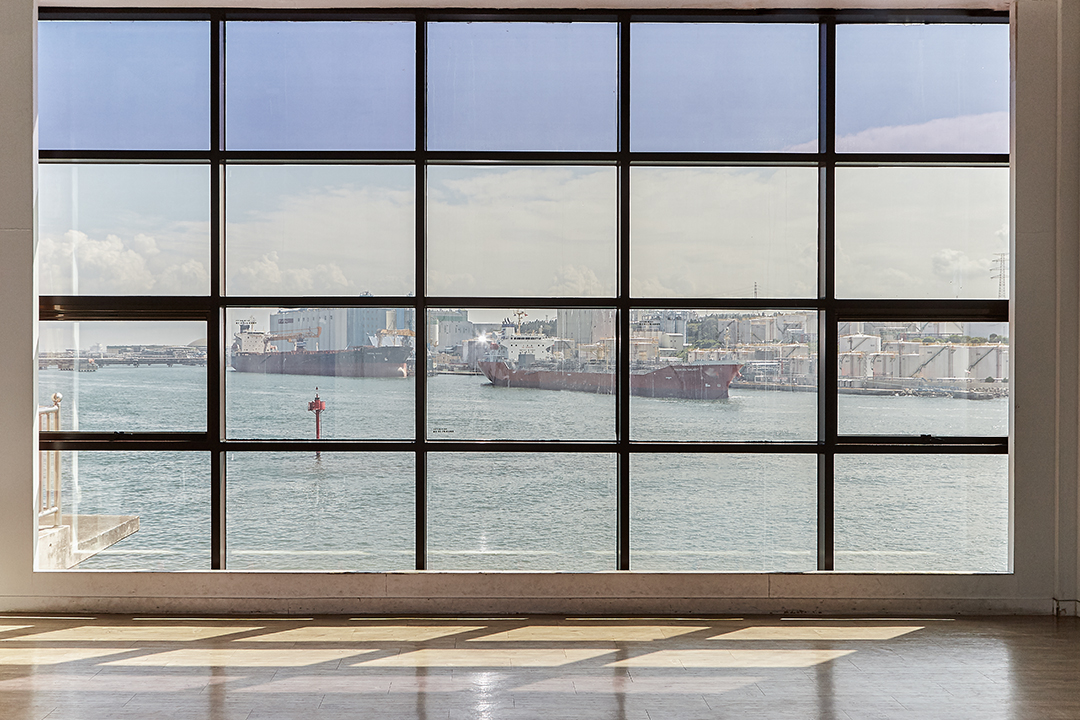 At Jangsaengpo Whale Museum, you can see the route for Ulsan gray whale migration. 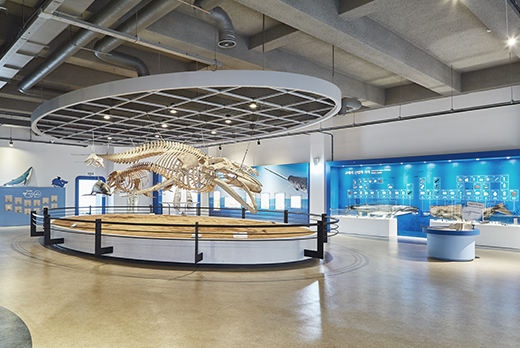 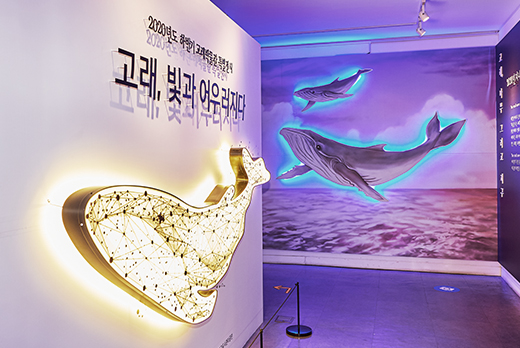 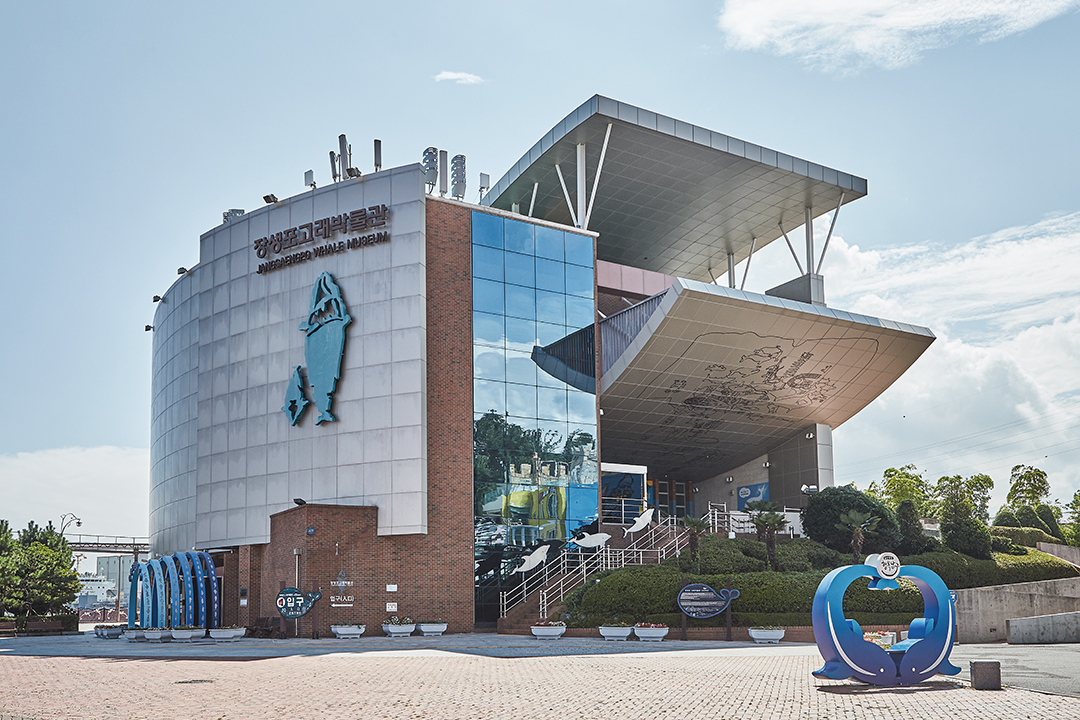 The museum weaves the history of whaling in Jangsaengpo into that of the entire region, and it also discusses protection of the environment. You’ll get to learn the history of Jangsaengpo and whales there on the first floor. The whale lab on the third floor displays bones of whales found in Korea. The special hall on the first floor showcases animals that are being endangered because of pollution, or the museum collaborates with a local upcycling company for an exhibition there. The museum compels you to reflect on whales, the marine ecosystem and also the ecology of the entire Earth. 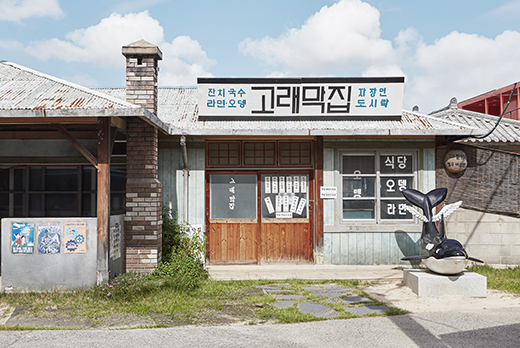 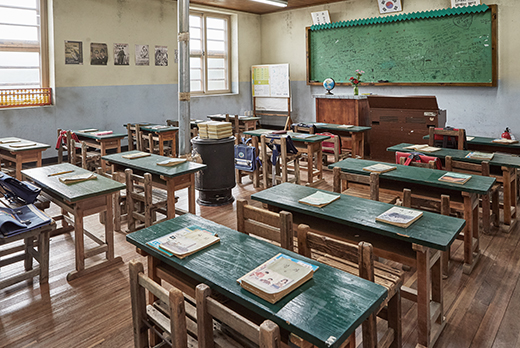 Whale Culture Village, a replica of the old Jangsaengpo

If you want a deeper look at whales and environment protection, you should sign up for a free program that runs every Wednesday. And the Whale Culture Village, about a 10-minute walk from the museum, is another destination. It has brought back to life some of the old relics of the whaling days, including the captain’s home, crewman’s home and whaling station. The old elementary classrooms from the 1970s will take grownups back in time. The aquatic plant gardens filled with hydrangea and lavender flower beds are the best spots to take photos. It takes half a day to cover the Jangsaengpo Whale Culture Zone, with its museum and village. 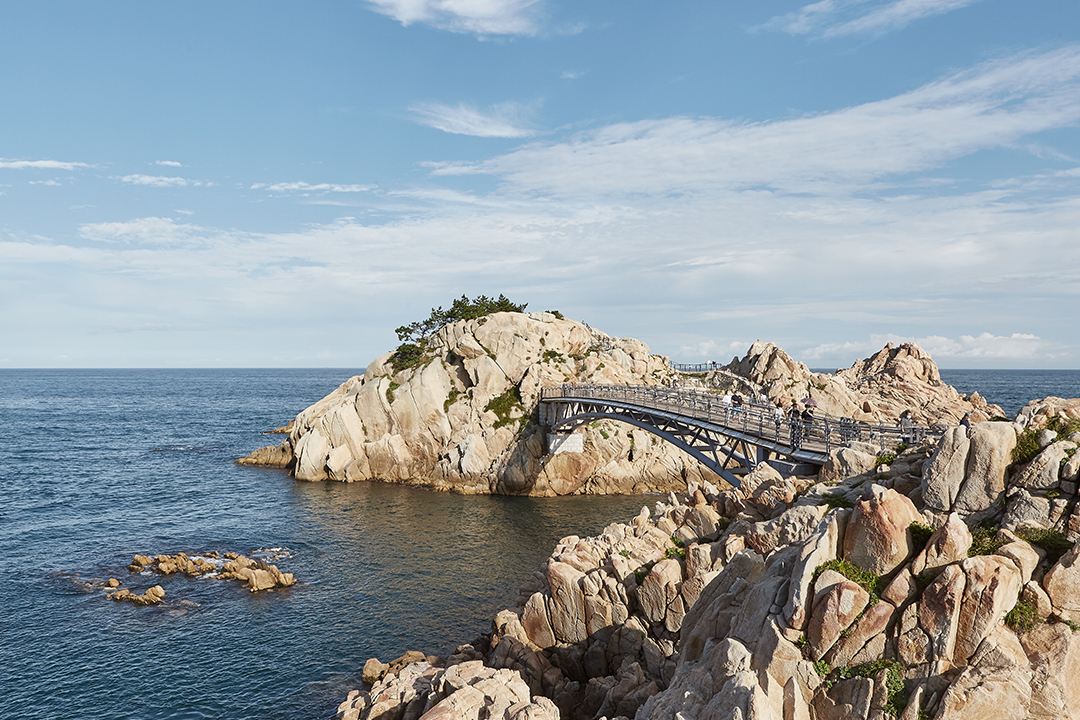 [6PM] Exhilarating View of Daewangam Park
We wanted a wide open, exhilarating view. Rocks of all sizes and shapes along the east coast line make for quite a sight to behold. Daewangam Park features Daewangam and other rock formations around it. The legend has it that the Queen of Munmu during Silla Dynasty is buried underneath Daewangam and became a dragon to protect the state. Daewangam Park and Ganjeolgot are two popular spots to watch the sunrise. 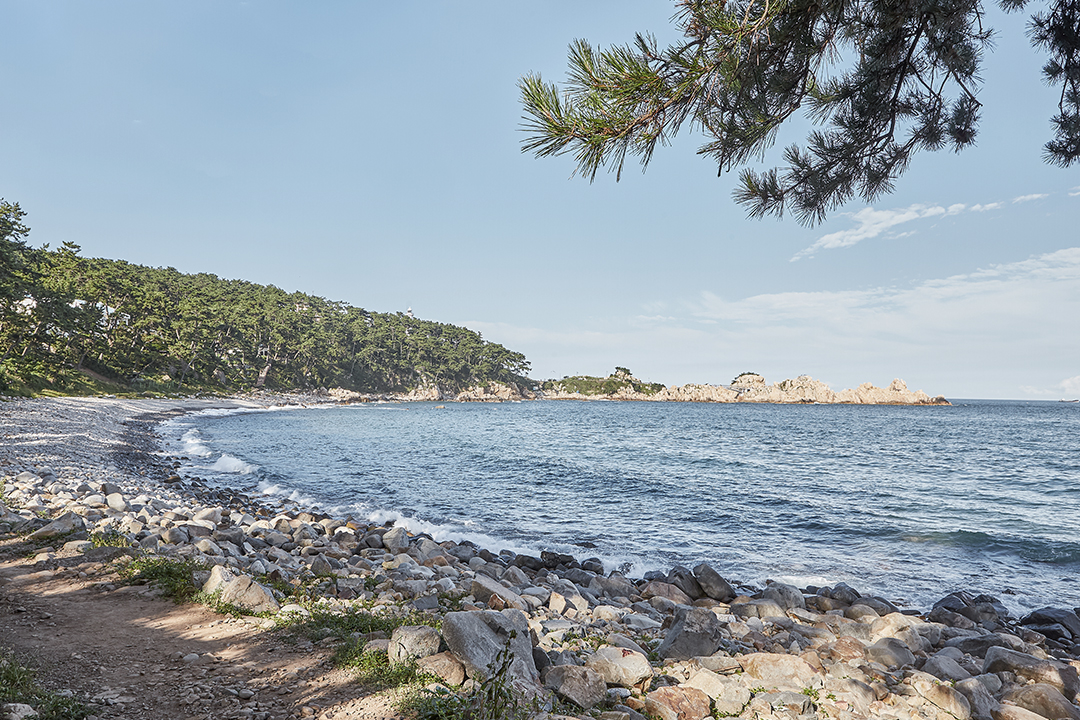 If you’re able to start a day in Ulsan, then check the sunrise time before heading out to this park. Just grabbing a seat somewhere near and looking out toward the sea with all sorts of rocks around it will make you feel better. Cats that wander amongst tourists and fall asleep on rocks are another sight that will set your mind at ease. If you have enough time, take a walk down the trail inside the park lined by some 15,000 pine trees. 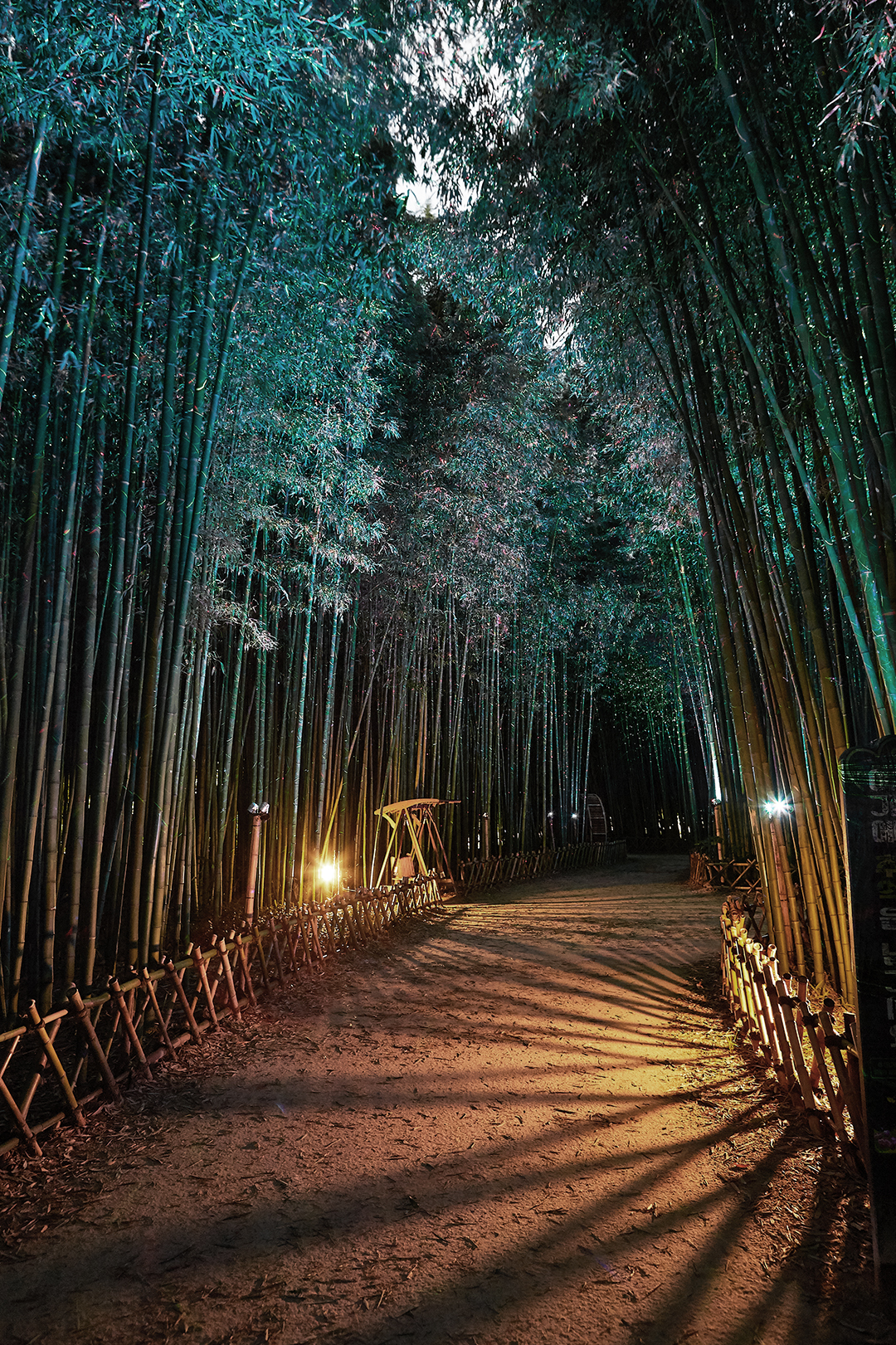 [8PM] Walking in the Bamboo Grove with Lights On
Who could ever have imagined so many people would gather around the Taehwa River, once infamous for its terrible odor? Ulsan cleaned up the river that had been polluted during the rapid industrialization and built an ecological park around it. With 21 gardens under six themes – including ecology, marine life, seasons, bamboo and rose of Sharon – the Taehwa River National Garden became the national garden in 2019, joining Suncheon Bay.
The Taehwa River National Garden stretches across Jung-gu and Nam-gu, sprinkled with beautiful gardens. In the late afternoon, you should head out to Milky Way inside the Simni Bamboo Grove.  At sunset, bamboos will be lit up, and 276 lights at night will make you feel like you’re inside the Milky Way. 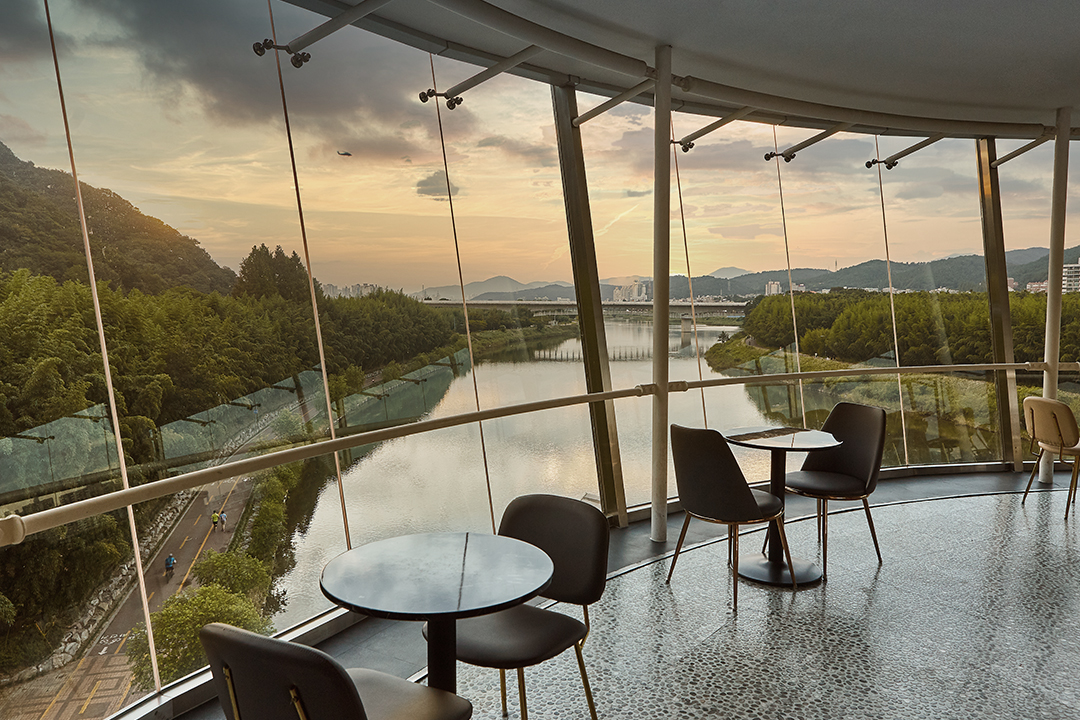 For a panoramic view of the river, visit the Taehwa River Observatory across the national garden. It’s housed in an unused intake tower. The revolving café on the third floor is the perfect place to sit back for some coffee with the river in the backdrop. 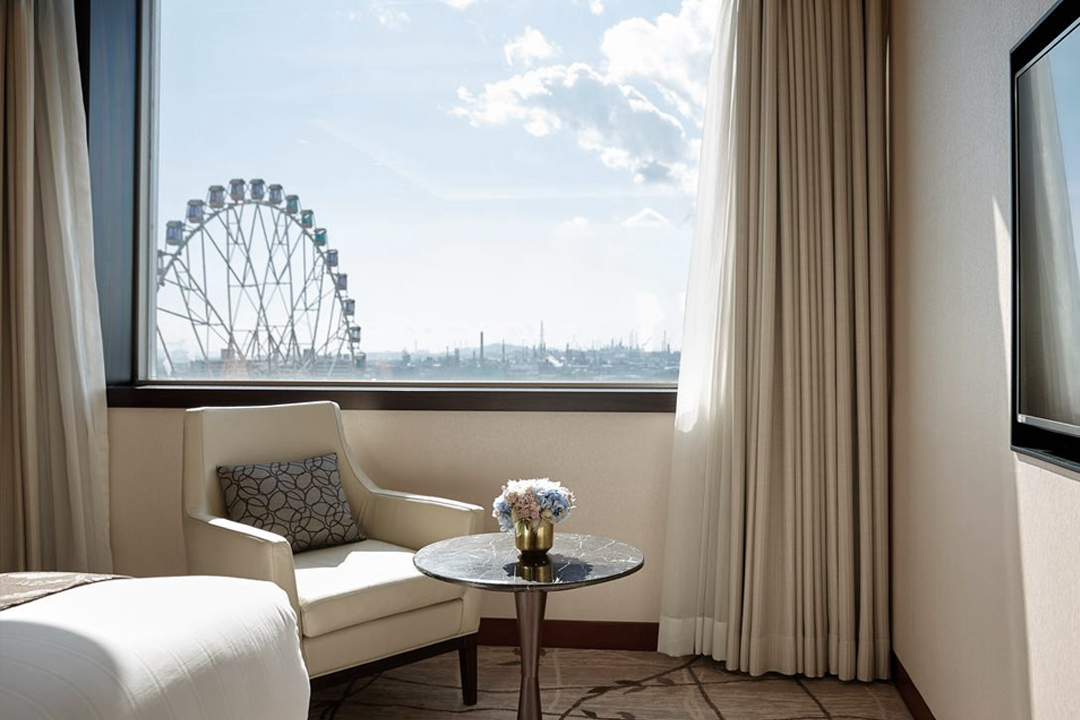 Where to Stay in Ulsan: LOTTE HOTEL ULSAN
LOTTE HOTEL ULSAN is some 10-minute drive from the Taehwa River National Garden’s Milky Way. Situated in the new downtown of Samsan-dong, LOTTE HOTEL ULSAN offers 200 rooms, with plenty of space for guests and elegant interior design. The hotel offers the panoramic view of the Onsan Industrial Complex, one of the 12 must-see sights of Ulsan. It also has the fitness center, the swimming pool and golf driving range. ‘Spa Eir’ and the sauna will help you unwind after a long day on the road. 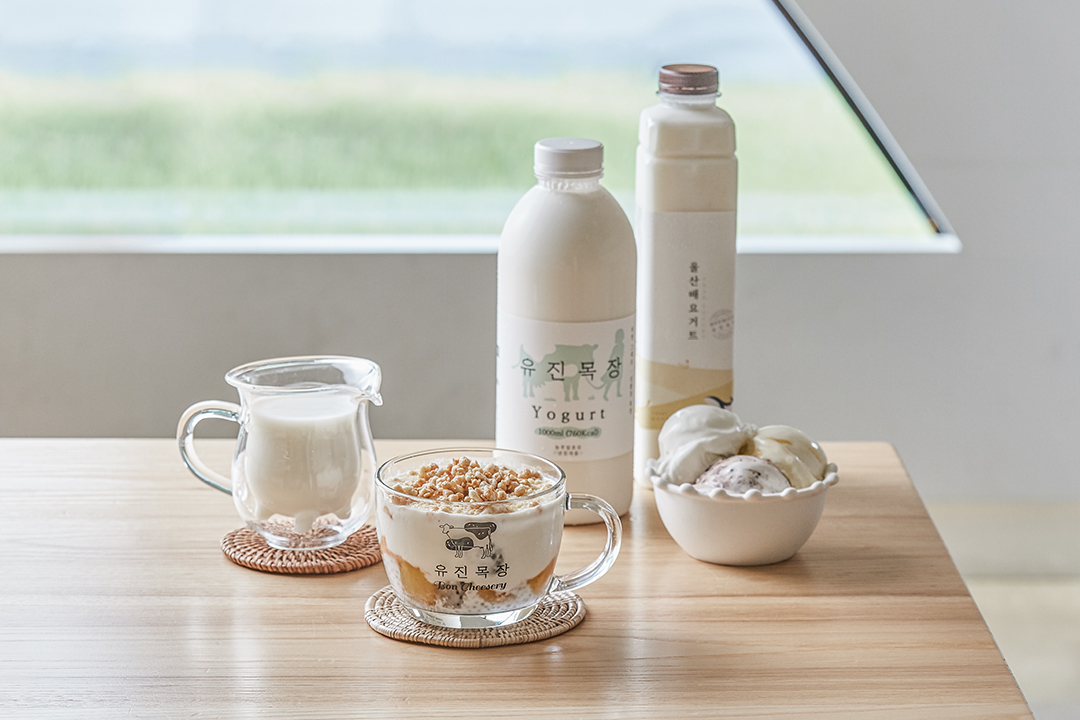 Yogurts, gelato and other products made with raw milk from Eugene Farm

[11AM] Starting Your Day with Fresh Milk from Eugene Farm Bon Cheesery
‘Bon Cheesery’ had the just kind of exterior that, if you stumbled upon it on Instagram, you’d click the ‘like’ button. It also has the menu that seems to belong to a bustling downtown. But Bon Cheesery is a good distance away from the heart of Ulsan. The dairy café is actually located near a farm. Jeong Hye-gyeong, who got into dairy in her 20s, has taken the family business over from her parents. She saved money working on farms for three years, and spent it on traveling to the U.S., Australia, Israel, Japan, Turkey and other countries in Europe that are known for advanced dairy farming. Based on what she learned from overseas, she opened ‘Bon Mil,’ a 33㎡ dairy café inside Bulgogi Village in Eonyang-eup in 2015. Despite her early success, Jeong didn’t jump into downtown and instead returned to the farm to stay closer to her roots. After opening Bon Cheesery, she also built her own factory to make food in safe and hygienic settings, rather than settling for mass production. Jeong has continued to challenge herself, building a new interactive space in front of Bon Cheesery. Visitors will be able to see firsthand how milk is made and what other products it makes. 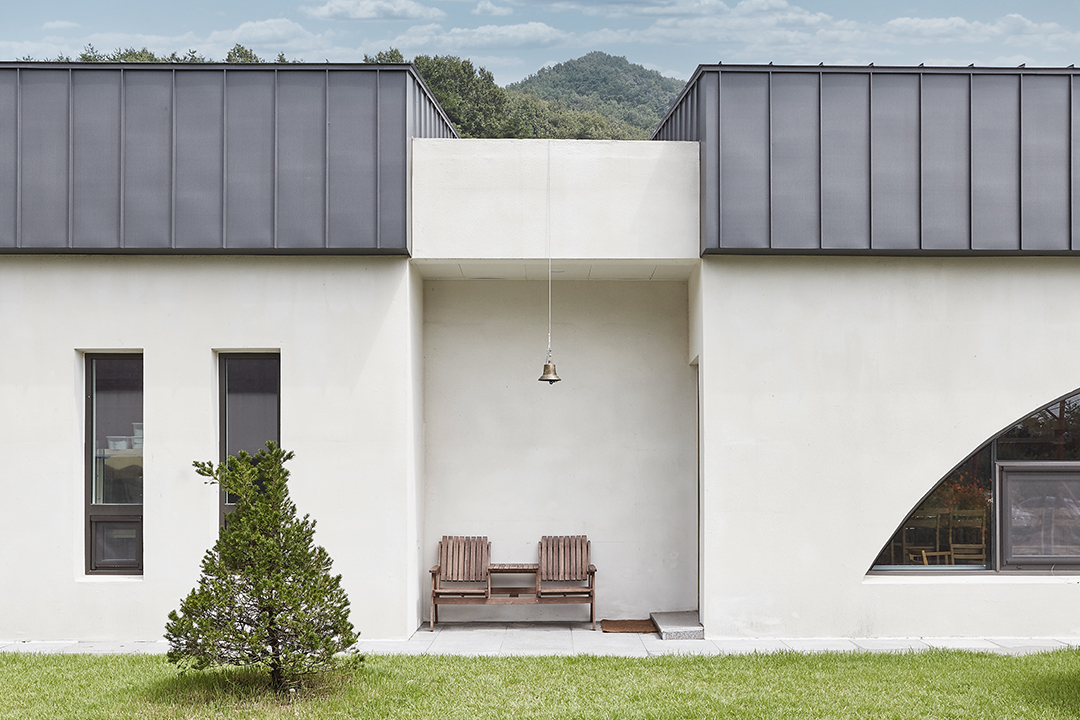 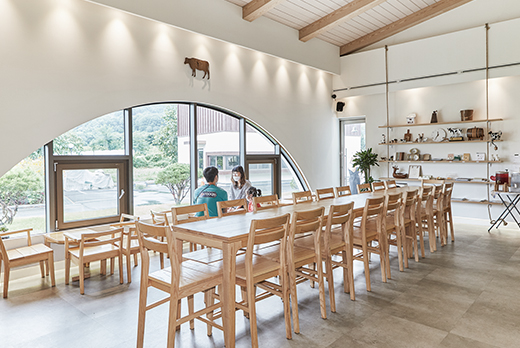 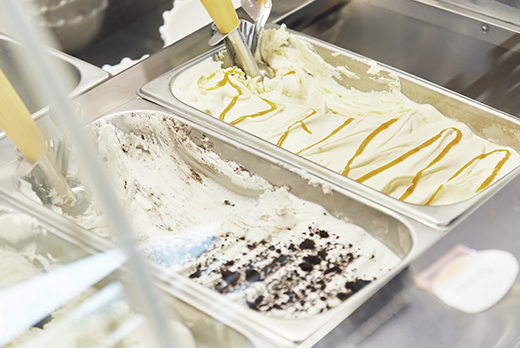 Bon Cheesery sells a wide variety of dairy products, made with raw milk produced by Jeong’s meticulous father. Gelato, made with milk that has been fermented for 18 hours, is low on fat and uses only natural ingredients. It’s a healthy choice for children. You can also get milk pudding, yogurt, grilling cheese and string cheese. Work on developing natural cheese is underway inside the lab. Bon Cheesery also offers free calf feeding at the farm. It’s a popular activity for families with children. For coffees, Jeong consulted with lava experts and selected beans that could go well with milk from Eugene Farm. Espresso-based beverages are perfect partners with fresh milk. But if you visit Bon Cheesery, order a fresh cup of milk squeezed earlier that same morning. 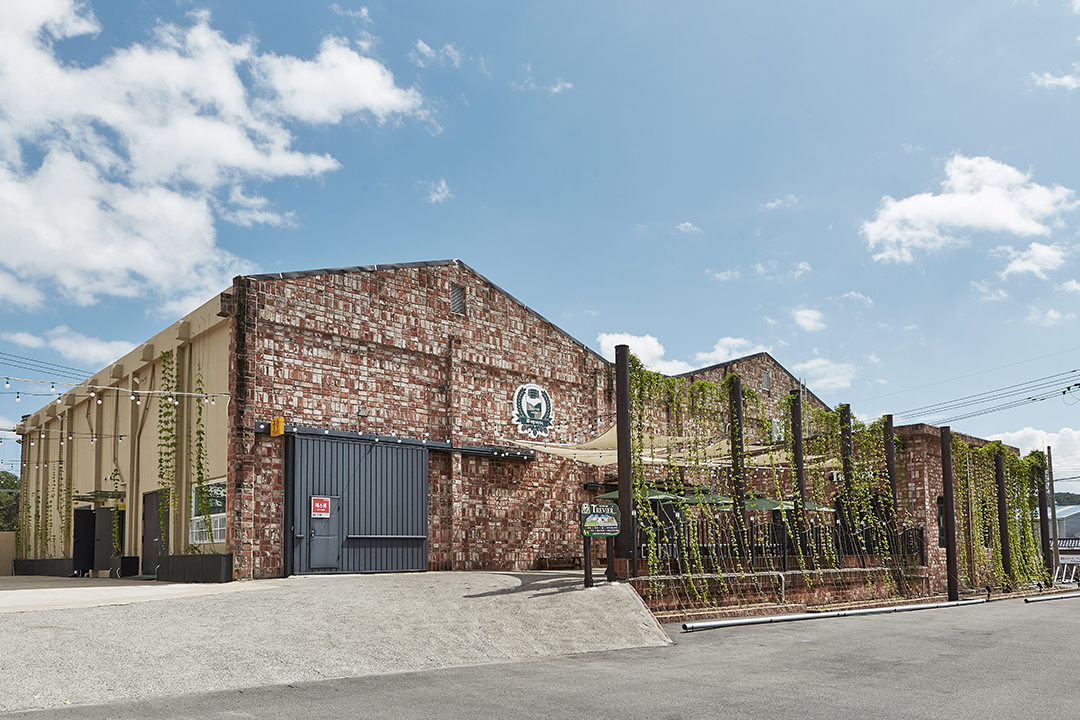 [2PM] Tasting German Pork Knuckle and Craft Beer at Trevier
Trevier Brewery is crafting its own craft beer culture in Ulsan. It started out in Samseon-dong in 2003 as ‘Trevi Brau Brewpub,’ inspired by the German Biergarten. The goal was to create a place where people would come together and mingle with. Then Hwang Jin-woo, who majored in food engineering in college and was an active member of a craft beer brewing club, joined the game, leading to the expansion into Trevier Brewery. It’s the only two-generation brewery in Korea, with the first-generation craft beer brewer father and his son in charge. It opened in 2015 inside a former low temperature warehouse for the National Agricultural Cooperative Federation in Eonyang. There are two buildings for beer brewing, plus a taphouse where patrons can sit in and drink beers or take them out. Sign up for a tour, at 2 p.m. or 5 p.m. on weekends, to see how beers are made at Trevier. You can test some, too. “As the craft beer brewery in Ulsan, we want to make the city proud,” Hwang said. ‘Trevier Home Festival,’ featuring music performances with Trevier beers flowing, celebrated its second anniversary. The brewery runs other cultural events that bring together local residents over craft beers. 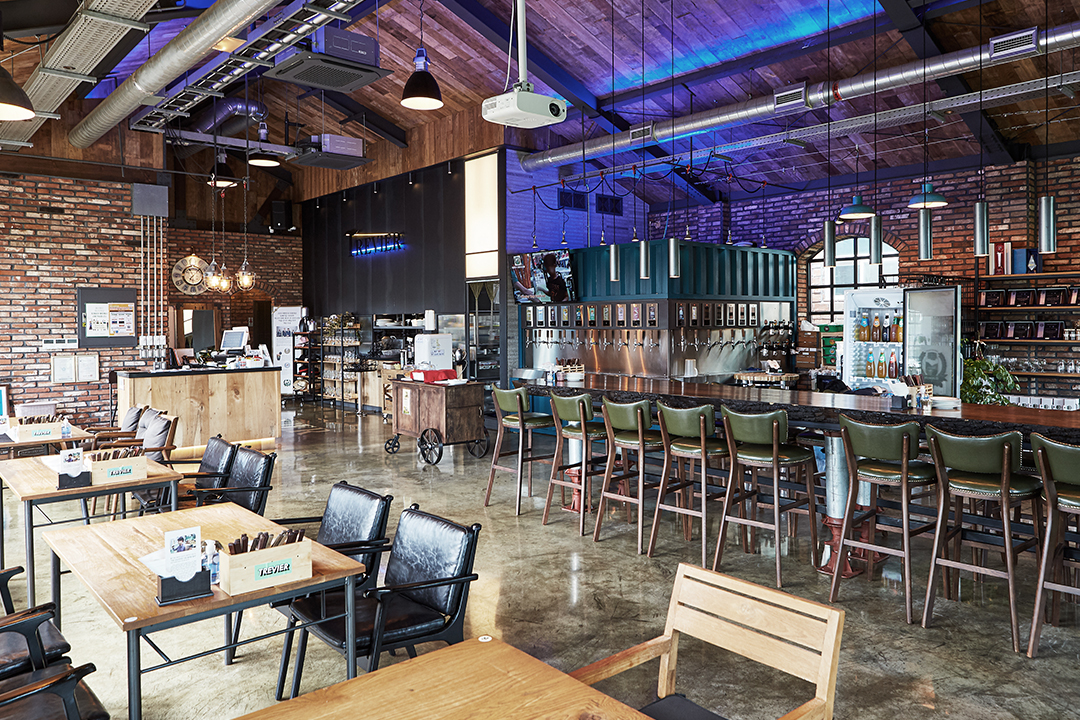 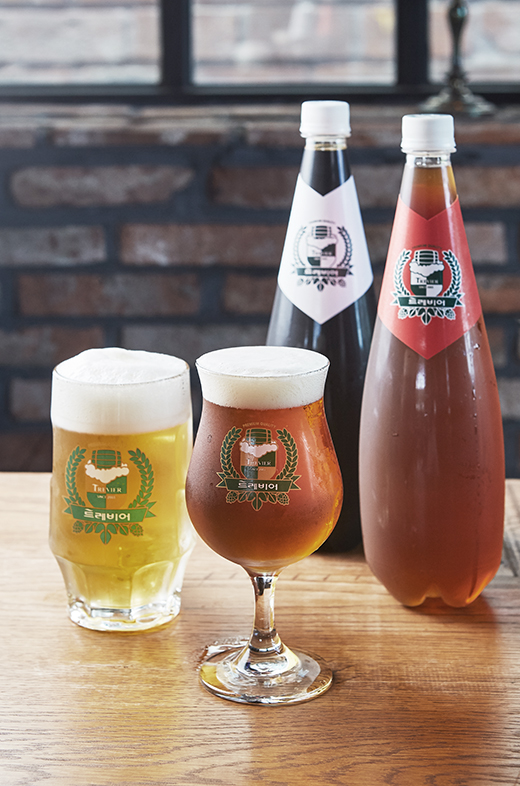 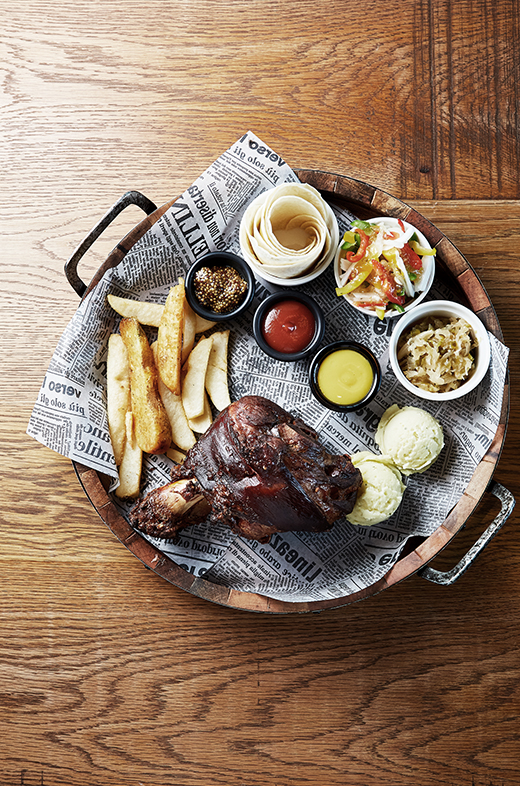 Trevier serves 11 types of beers, with six ales and five lagers. Whereas most craft beer places lean heavily on ales, Trevier is going the other way and serves up more lagers. And lager beers make for better social drinks. Trevier’s signature beer is also a lager, ‘Cheyong India Pale Lager (IPL).’ It’s name after the Cheoyong legend in Ulsan. It has the exotic scent of tangerine, grapefruit, orange or even flowers, and the refreshing taste typical of a lager is right in the wheelhouse for Korean drinkers. ‘Woori Ssal (Our Rice) Lager,’ made with rice harvested in Ulsan, has the delicate, sweet flavor of rice. ‘Imperial Stout,’ the dark beer that topped the craft beer category at the 2019 Korea Wine & Spirits Awards, is also highly recommended. At the taphouse, you can order from a lineup of 11 types of beers. But we have to warn you: if you sample those beers with Schweinshaxe, the German pork knuckle, you may never want to go home. 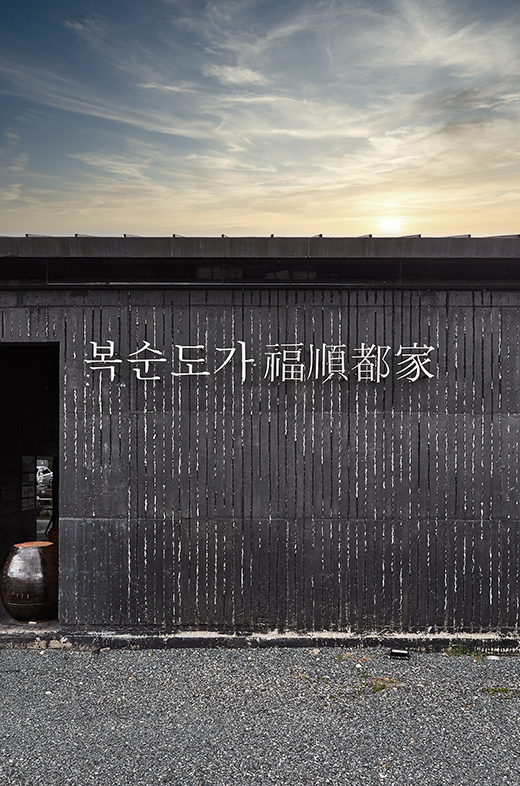 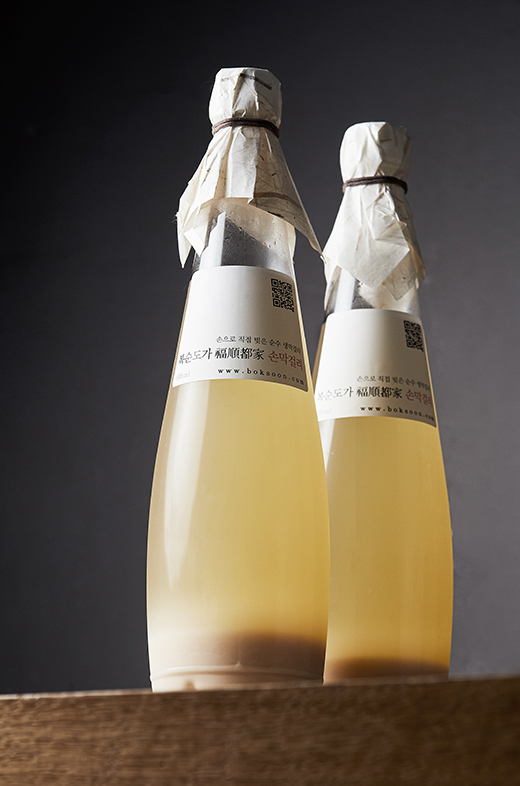 [4PM] Boksoondoga, ‘Makgeolli’s Answer to Champagne’ for Souvenir
Eonyang in Ulsan has long been famous for great water. Mineral water factories, soju factories and Trevier Brewery are all in this area. And ‘Boksoondoga’ may top them all in its national prestige and fame. Boksoondoga is best known for makgeolli (rice wine) that can rival wine and champagne. Kim Jung-sik and Park Bok-soon, and their two sons have stuck to the traditional home brewing techniques while giving it a twist to better cater to the modern taste buds. The brewery is named after the founder, Park. Made with Ulsan-grown rice and homemade yeast, makgeolli is fermented inside a pot that’s 70 years old. Natural carbonic acid is formed, with a blend of tart and fruity flavor. It takes far longer to make than ordinary makgeolli and the process is quite labor intensive. And there are people all over the place who appreciate such dedication. Over a thousand visitors, not just from Korea but from Japan and other foreign countries, come to the brewery to find out more about the story behind Boksoondoga’s makgeolli. 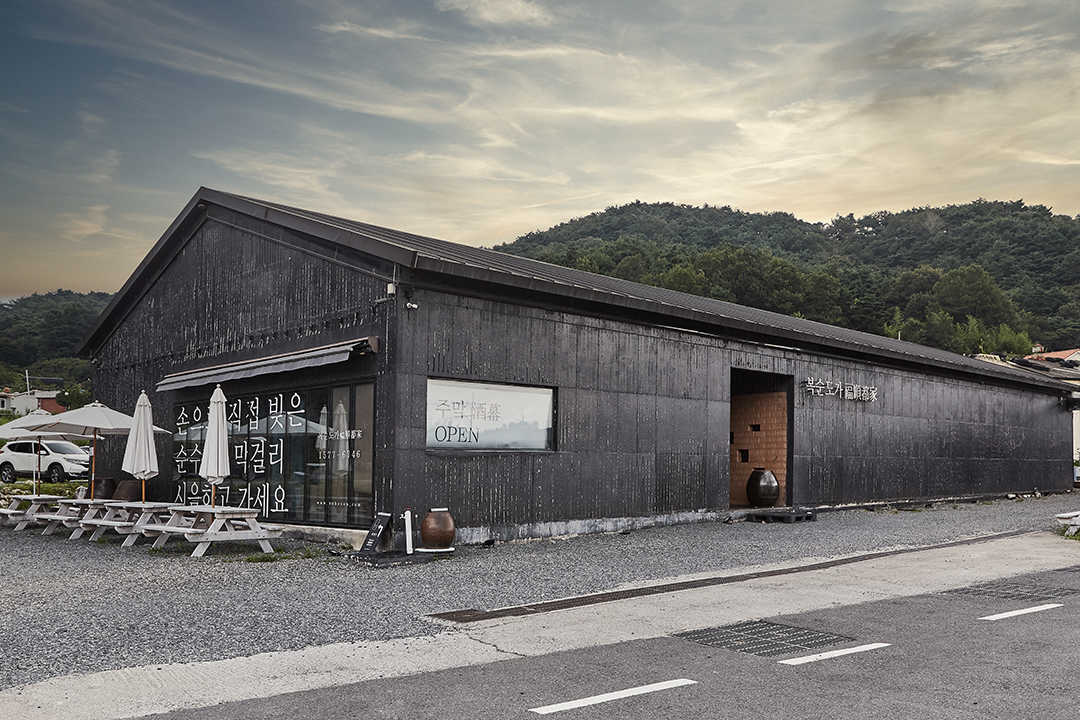 Boksoondoga’s brewery, built under the concept of ‘fermentation architecture’

There’s more to Boksoondoga than makgeolli. The brewery itself is worth a visit. It was built under the concept of ‘fermentation architecture,’ and was designed and built by the family’s eldest son, Kim Min-kyu, who studied architecture at The Cooper Union in New York. The construction alone took a year. Straw and red clay from the area were used for this black building, which represents the value of the traditional culture that is fermentation. You can see how Boksoondoga’s makgeolli is fermented there. Standing next to the brewery is a wooden tavern. Our ancestors used to sit around at one of these places to enjoy makgeolli. You can order Boksoondoga makgeolli and enjoy it with pajeon (green onion pancake) and gamjajeon (potato pancake), though during the COVID-19 pandemic, you can only purchase makgeolli there. Have a toast with Boksoondoga makgeoll, and you’ll realize there’s no better way to cap off a trip to Ulsan.