Baekje Coming into View on a Walk Along Fortresses
We took a walk along fortresses in Buyeo, representing the last remnants of Baekje in the last capital of the kingdom. What we saw was rich history.
Buyeo in South Chungcheong Province was the last capital of Baekje during the Three Kingdoms period. It was called Sabi then. Baekje relocated its capital from Wirye (near Seoul today) to Woongjin (present day Gongju) and to Sabi. It kept moving south. All of those capitals had vast plains below and a river above. It would help them fend off enemies and allow them to move swiftly. Gyeongju, the old capital of Silla, still has plenty of traces from that era. But the same can’t be said about Buyeo and Baekje, since the kingdom moved its capital frequently. Jeongnimsaji (Jeongnim Temple Site), Busosanseong (Buso Fortress) and Gungnamji would qualify as places that will tell you a bit of history of Buyeo as former Baekje capital. But you can also visit Baekje Cultural Land to get a comprehensive look at some 680-year history of Baekje.
To get a closer look at the Sabi-era Baekje while in Buyeo, we’d recommend taking strolls along fortresses, or however little of them are left standing. It should start at Busosanseong. 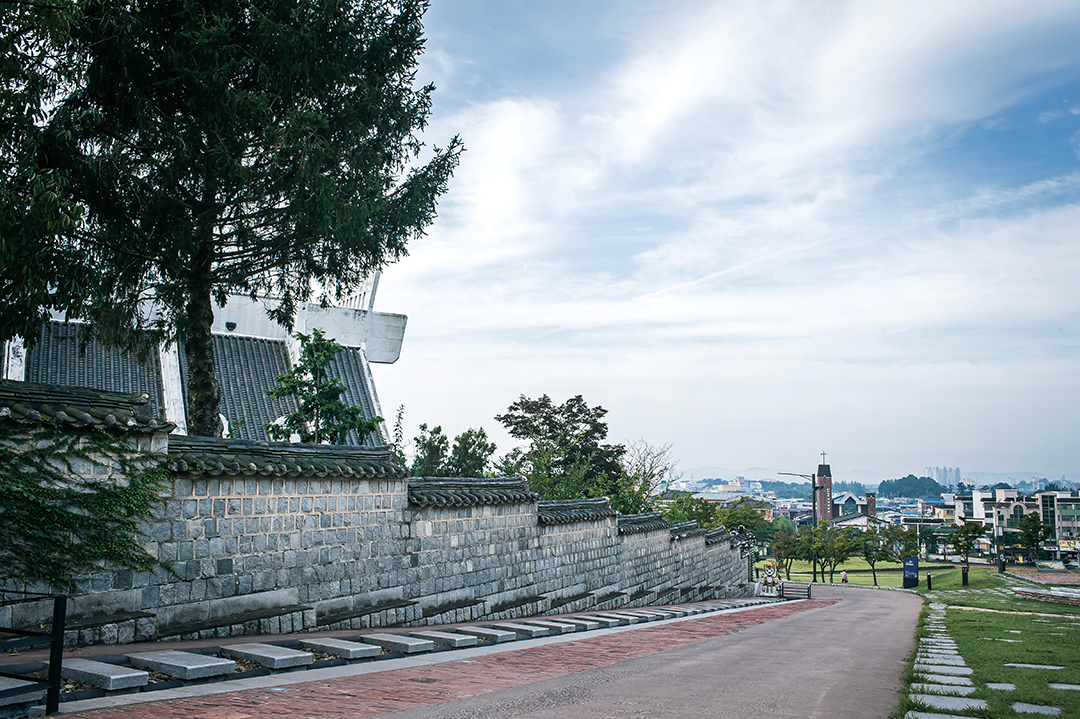 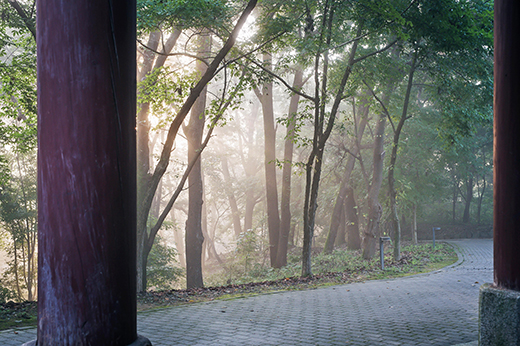 Busosanseong is a great place to go for a walk on a foggy morning. 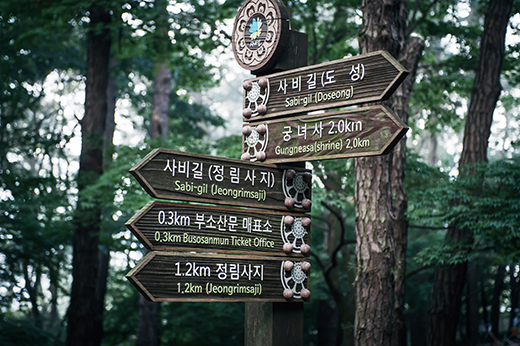 There are many traces of Baekje inside Busosanseong.

Busosanseong, Last Hints of Baekje
Busanseong was the last fortress surrounding the royal palace in Sabi in the Baekje kingdom. The fortress was put up around Mt. Buso, south of the Baengma River. refers to it is Sabiseong or Soburiseong. The fortress does begin on Mt. Buso, which stands 106m tall in the heart of Buyeo. The fortress was built around the peak of the mountain and another layer of walls surrounded it. It was constructed that way to better guard against enemy attacks.
Busosanseong is closely tied to some important parts of Baekje’s history in its final days as the kingdom. They include ‘three thousand court ladies,’ Nakhwaam and Samchungsa Shrine, which honors three late-Baekje loyal subjects of Gyebaek, Seongchung and Heungsu. The legend of the three thousand court ladies and Nakhwaam is so famous that it’s easy to forget there is a mix of fact and fiction. It’s questionable that 3,000 court ladies really jumped off that rock but that’s really not the point. When you reach Nakhwaam on a foggy morning up the mountain, the images of those women with Baekje on the verge of collapse will form in your head. Today, Busosanseong is a favorite morning trail for the locals.
During peace time, Busosanseong served as the back garden for the royalty. The king and the aristocrats enjoyed the view of the mountain from Yeongillu or Baekhwajeong pavilions, or take a boat ride from the Gudrae Dock and take in the sight from the Baengma River. 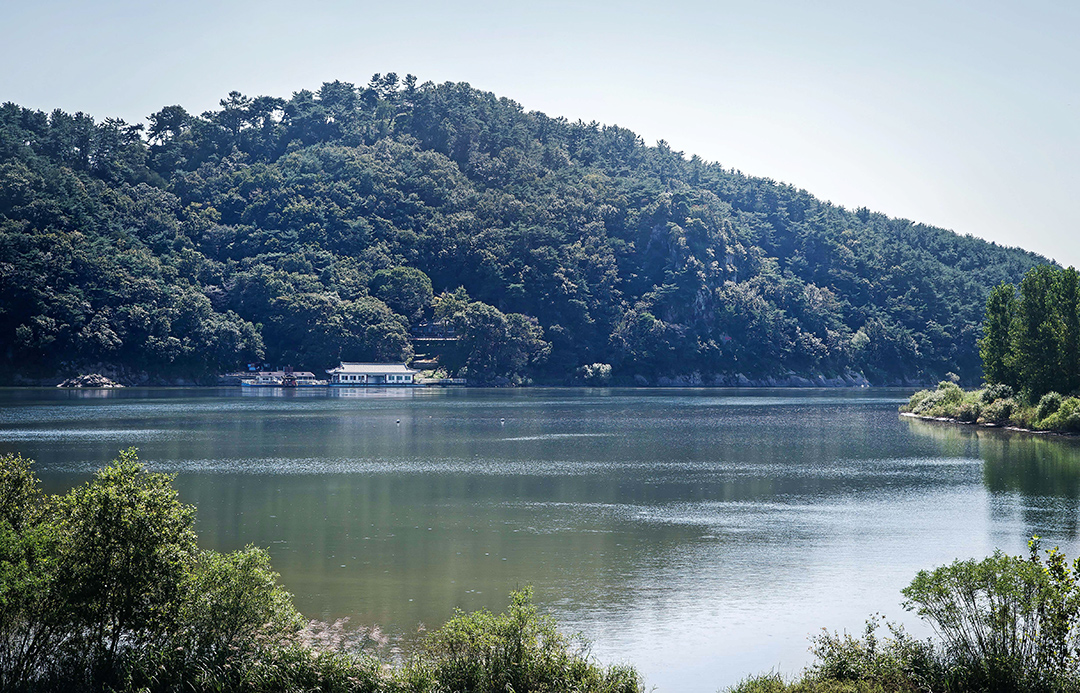 Nakhwaam seen from the other side 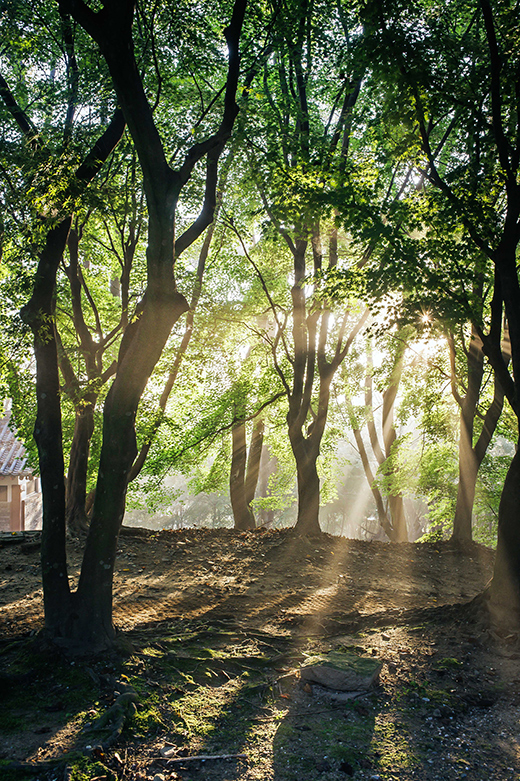 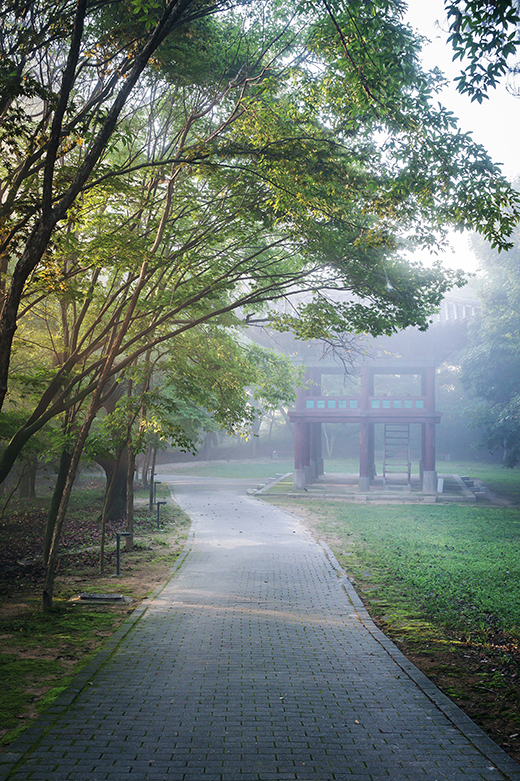 The forest trails around Mt. Busan is simply gorgeous. The forest in the area was selected by the Korea Forest Service as one of the most beautiful forests that had to be preserved for the 22nd century. Taejagol forest trail is at the top of our list. It is said to have been a favorite trail of taeja (Crown Prince) of Baekje. Pine trees are lined up on either side of the path, covering up just enough of the sky to give the place an almost mythical feel. To full enjoy that view, you should go out early in the morning.
There are three routes along the fortress. It will take as short as one hour or as long as two hours. We’d recommend taking Route No. 1 in the morning, stretching from Samchungsa and past Yeongillu, and through Taejagol, Nakwhaam and Goransa.
Address 31 Buso-ro, Buyeo-eup, Buyeo-gun, South Chungcheong Province 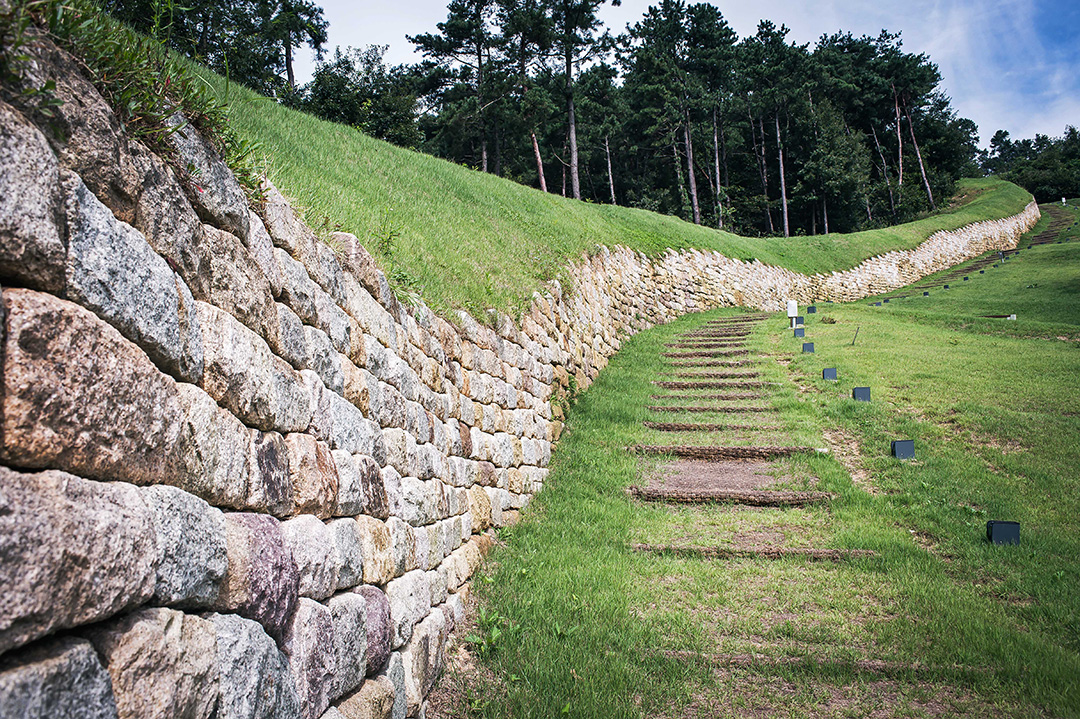 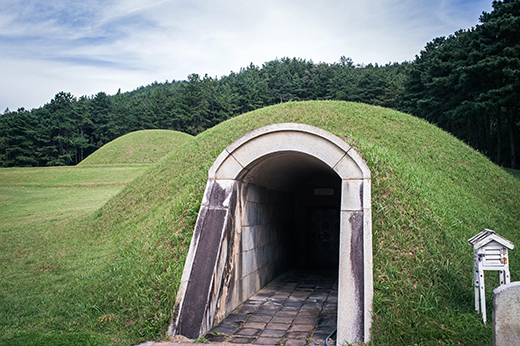 You can see relics recovered from tombs. 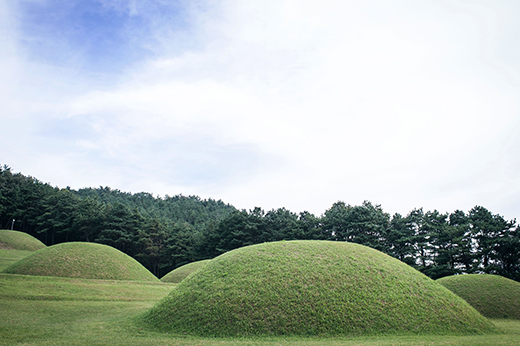 There are seven tombs at Naseong.

Buyeo Naseong, Proof of Baekje’s Strength
Naseong is the term for a fortress built around the outskirts of the capital. Buyeo Naseong was put up around Busosanseong to protect Sabi. Buyeo Naseong stretches for about 8 kilometers. In addition to protecting the capital, it also served as the boundary dividing the Sabi proper and its neighboring area. It was built around 530 AD during King Seong, when the capital was relocated to Sabi, and it’s the oldest remaining naseong in Korea.
The steep incline on the outer part makes it tough to climb it from outside, while the inner part is flat enough for horses to run. Naseong was to function as the first line of defense, and several guard posts were put up along the wall. It was difficult for enemy forces to get past Naseong. Silla General Kim Yu-shin is said to have marveled at the impregnable fortress when he tried to invade Baekje in an alliance with Tang Dynasty.
To reach where Buyeo Naseong once stood, you have to get through Neungsan-ri Gobungun (ancient tombs). It’s where tombs of Baekje kings are located. To flaunt their power and authority, those kings had their tombs built in the heart of the capital. But after Sabi became the new capital, those tombs gradually moved outside Naseong. There are seven tombs in total, all of them tightly protected with flagstones.
Unfortunately, most of the artifacts from these tombs have been robbed. One piece that has been saved is Baekje Stone Sarira Shrine with Inscription. 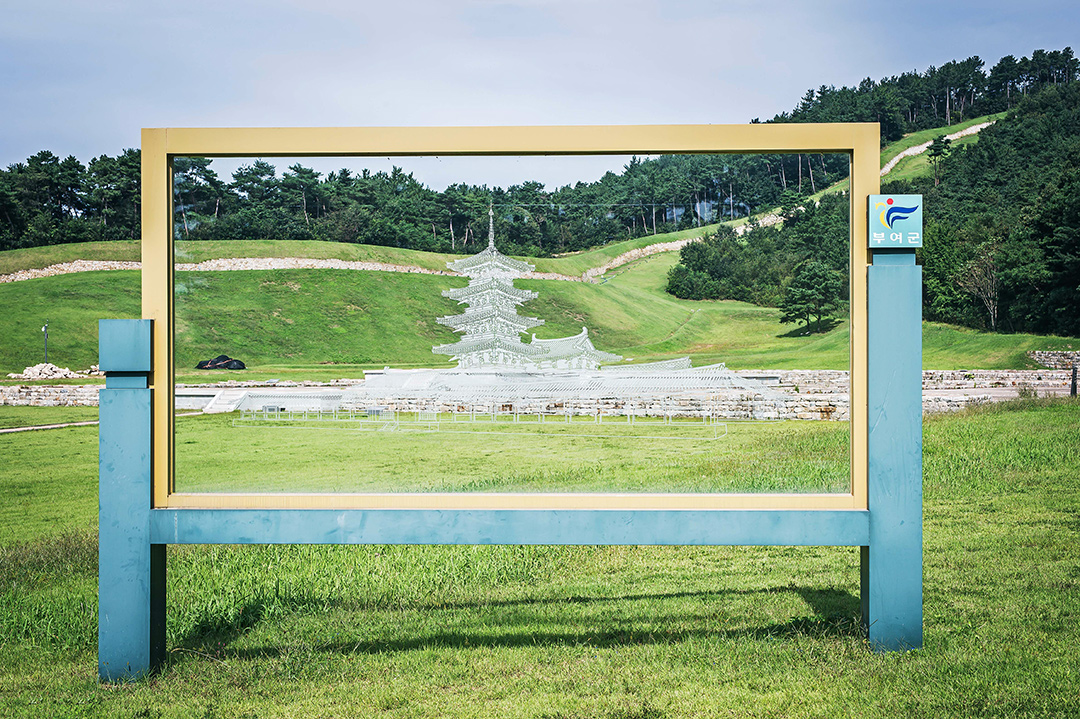 A 2D rendition has brought Neungsan-ri Temple back to life. 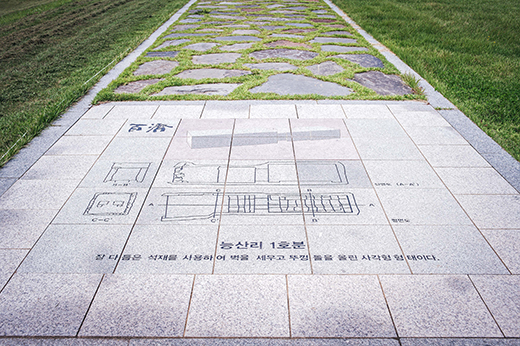 Vestige of the first tomb at Neungsan-ri 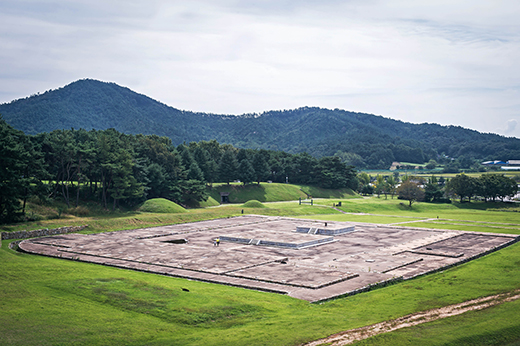 View of the old site for Neungsan-ri Temple from afar

On your way past the tombs and toward Naseong, you will also be able to see the site for Neungsan-ri Temple, the royal temple during Baekje. It is now literally just the ground where the temple once stood. On a glass panel there, though, a 2D rendition of the temple, or at least what the temple must have looked like, is inscribed. Baekje gilt-bronze incense burner, one of the most famous Baekje-era relics, was recovered from this site.
Both Neungsan-ri Gobungun and Naseong have been designated UNESCO World Heritage as part of the Baekje Historical Areas.
Address 67 Neungsan-ni, Buyeo-eup, Buyeo-gun, South Chungcheong Province 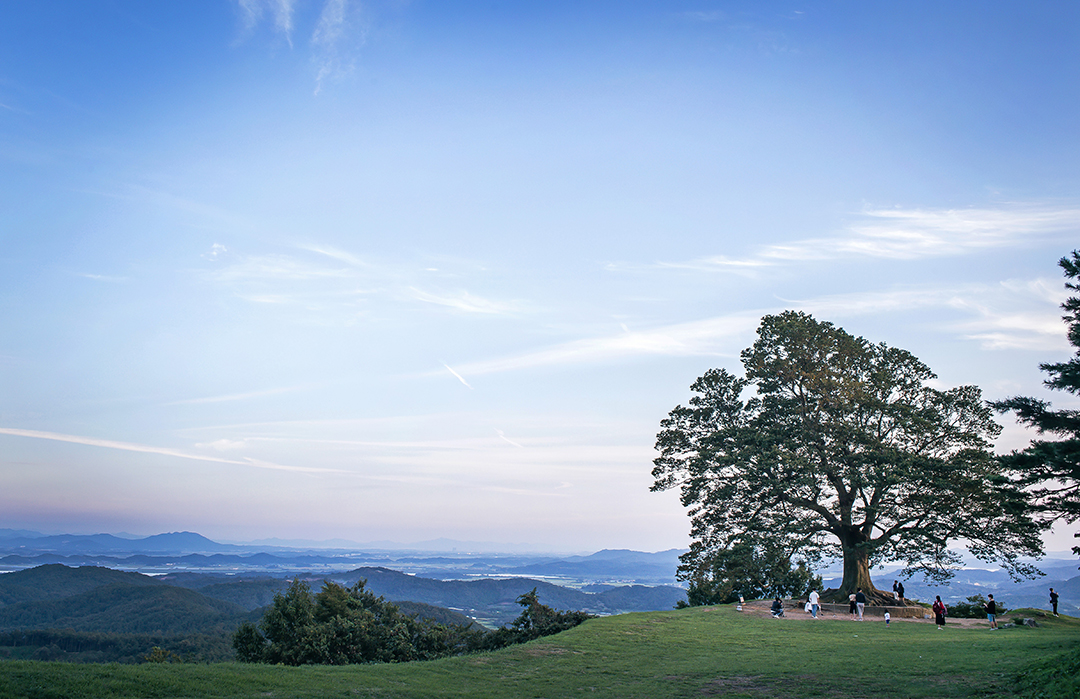 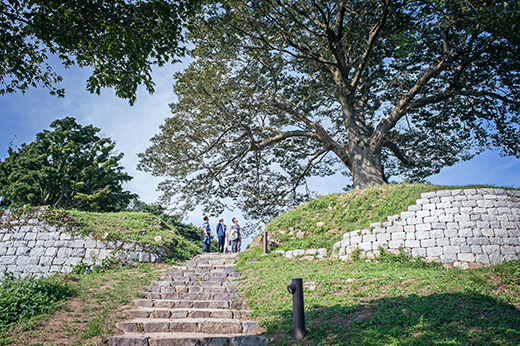 Walk up the stairs to reach the Love Tree and vast flatland. 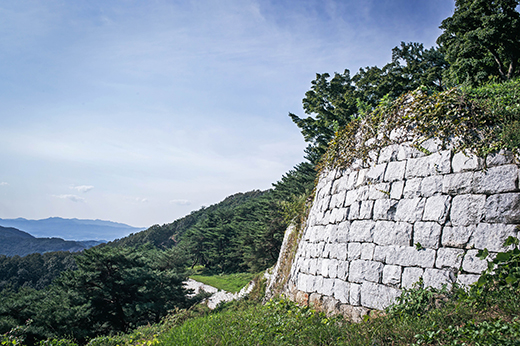 Garimseong (Seongheung Sanseong), Favorite Photo Spot of the Young
Seongheung Sanseong sits about 16 kilometers south of Buyeo. During King Dongseong’s reign, Baekje wanted to protect its old capital in Woongjin, and put up the fortress far down the Geum River. They stacked up stones to build the wall, which is 1,200 meters long. It had been called Seongheung Sanseong up until 2011, when it became known as Garimseong. The area it occupies used to be called Garim-gun during Baekje.
According to historical documents, the Minister of Royal Guards named Baekga was in charge of building Garimseong. He staged a revolt against King Dongseong for exiling him to this area, though Baekga was later defeated by King Muryeong.
Garimseong has an important historical value, for there are previous few fortresses whose origins are known. But there is yet another, rather bizarre reason, that Garimseong attained its fame. It’s because of the large zelkova tree that has come to be called ‘Mt. Seongheung Love Tree.’ It stands some 400 meters up the hill from the parking lot at Garimseong. It’s at once beautiful and mystical. The tree towers over a large field of grass. 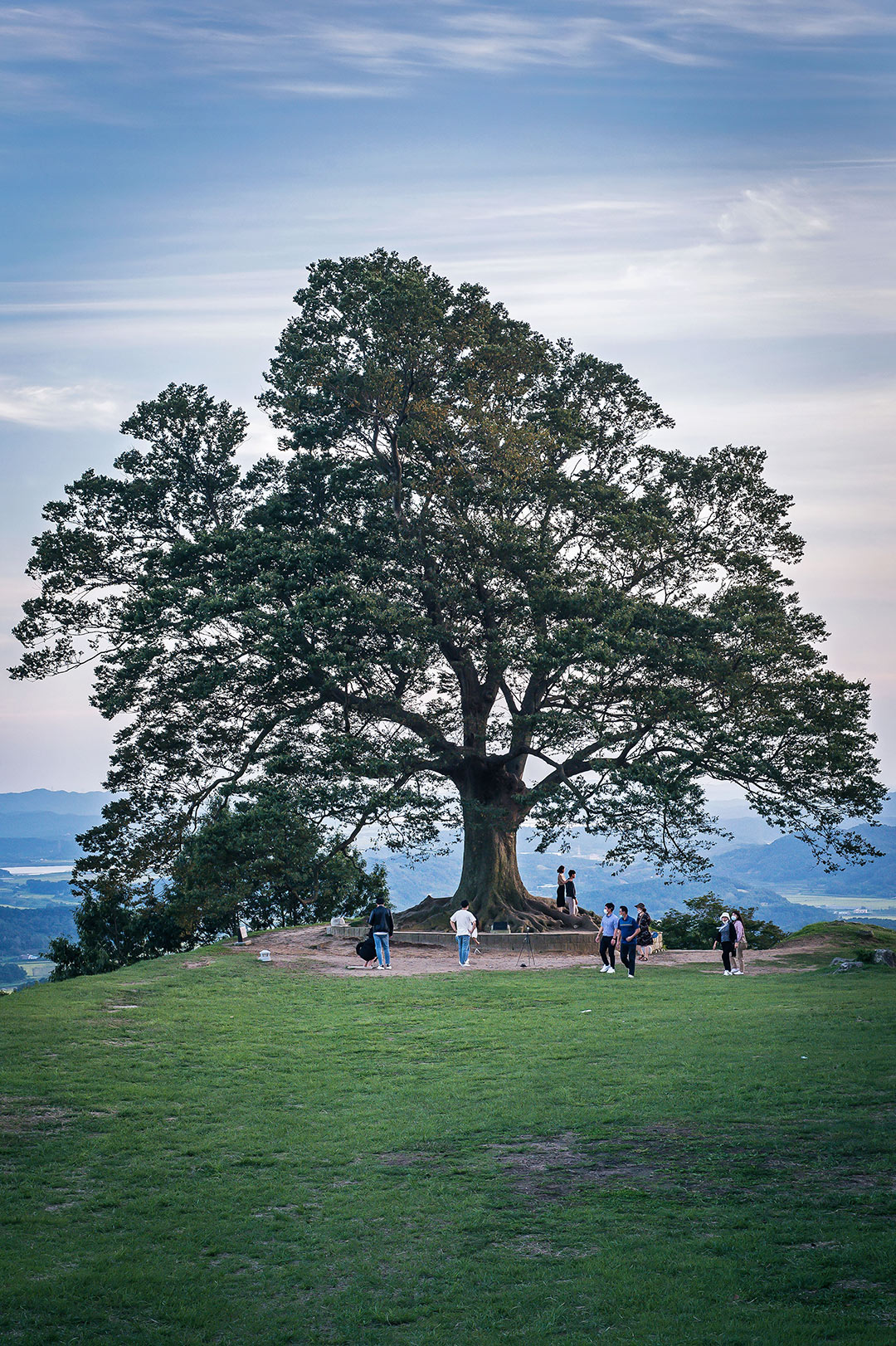 Since being featured in a TV series, Seongheung Sanseong’s Love Tree has become an Instagram sensation.

At 22 meters tall, the zelkova tree has been up there for some 400 years. It earned the ‘love tree’ moniker because its drooping branches take the shape of a half heart. Young couples have been taking selfies in front of these branches and then edit them into a full heart to post on social media, and those images have gone viral. Go search for Mt. Seongheung Love Tree on Instagram and you’ll see a few of those pictures.
A popular 2019 TV series was filmed there, leading to huge crowds on weekends.
Just watching young lovers take pictures under the love tree is a fun activity in itself. The best time for a selfie with the tree is during the twilight in winter time. With fewer leaves, you’ll get a clearer view of the heart. This is a highly Instagrammable spot.
Address 167 Seongheung-ri 97, Imcheon-myeon, Buyeo-gun, South Chungcheong Province 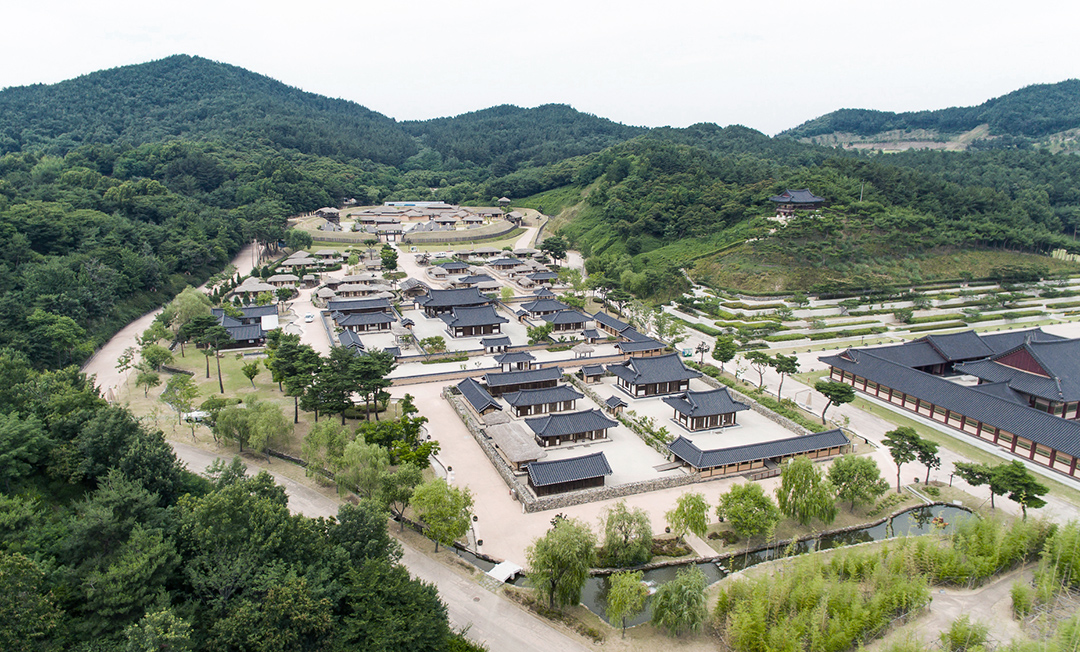 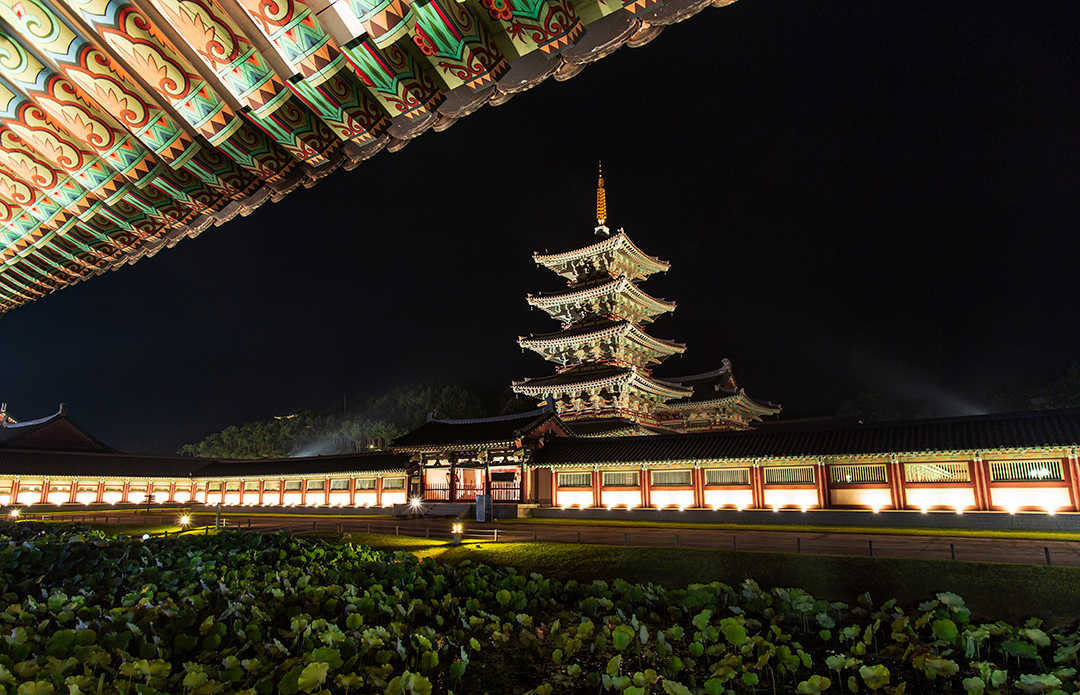 Baekje Cultural Land, Recreating Baekje’s History
With Baekje relocating its capital twice and going through so many battles, there are few viable relics left from the period, with merely historical sites still in place. Baekje Cultural Land was completed over a 17-year stretch, from 1994 to 2010, to help people see firsthand what Baekje must have been like in its heyday. After some painstaking historical research, Wiryeseong from the early Baekje era, plus Sabigung and Neungsa, have all been reproduced to their actual size. There are some impressive renditions, including the 38-meter tall, Baekje-style wooden pagoda. Customs and social classes from that era are depicted in the forms of Baekje-era homes. The theme park also offers interactive opportunities.
There’s no better place to develop an appreciation of the Baekje culture from 1,400 years ago than this place.
Address 455 Baekjemun-ri, Gyuam-myeon, Buyeo-gun, South Chungcheong Province
Phone +82-41-408-7290
Hours Weekdays 09:00~18:00 / Fridays and Weekends 09:00~22:00
Website Baekje Cultural Land 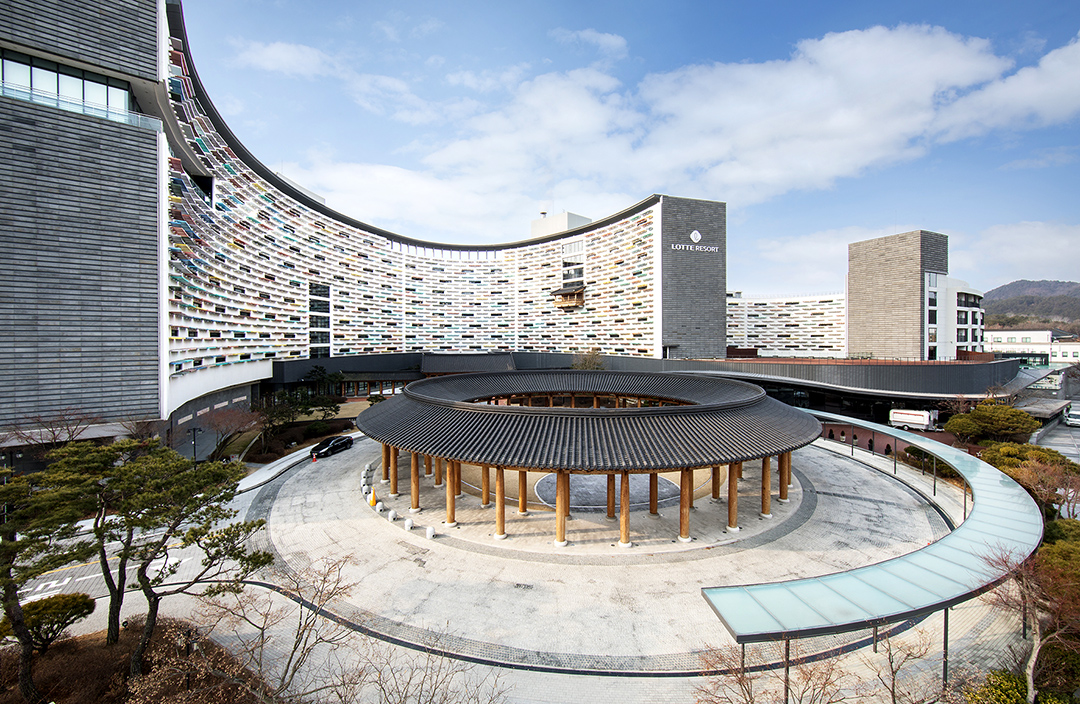 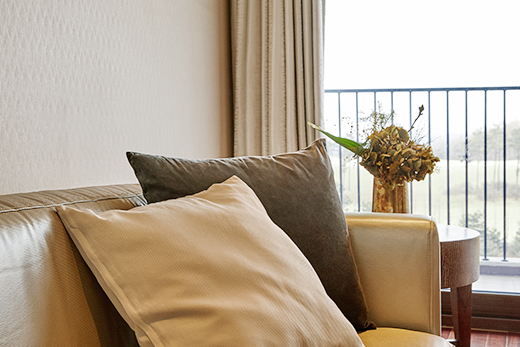 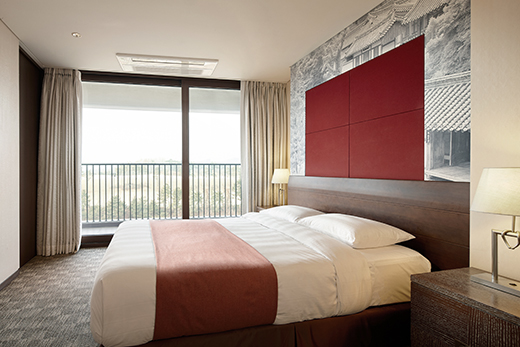 Where to Stay in Buyeo: LOTTE RESORT BUYEO
Standing 10 stories high with one underground floor, LOTTE RESORT BUYEO operates 310 rooms. The horseshoe-shaped exterior features over 300 panels, in colors that can be easily found across Korea. The splendid night view of the resort is a popular item on social media. It’s a great destination for families, as it offers opportunities for historical and cultural explorations, leisure activities such as golf and relaxation.
Address 400 Baekjemun-ro, Gyuam-myeon, Buyeo-gun, South Chungcheong Province
Phone +82-41-939-1000
Website LOTTE RESORT BUYEO