Symbol of Urban Transformation in Seattle, The Spheres
The headquarters campus of tech giant Amazon is located in downtown Seattle. Unlike other tech firms who have built their campuses in the outskirts of a city, Amazon aims to utilize its geographical advantage to better communicate with the public. ‘The Spheres’ is like the final piece of the puzzle.
At the northern tip of downtown Seattle stand three glass domes, not far from the Space Needle. The structure is called ‘The Spheres,’ also known as the ‘Amazon Spheres’ and ‘Seattle Spheres.’ It is an alternative business space for Amazon, the leading global e-commerce firm and one of the four major tech companies in America. The Spheres started as an indoor garden and lounge space for Amazon employees to visit when they want to take a break from their typical work setting to refresh and recharge themselves. 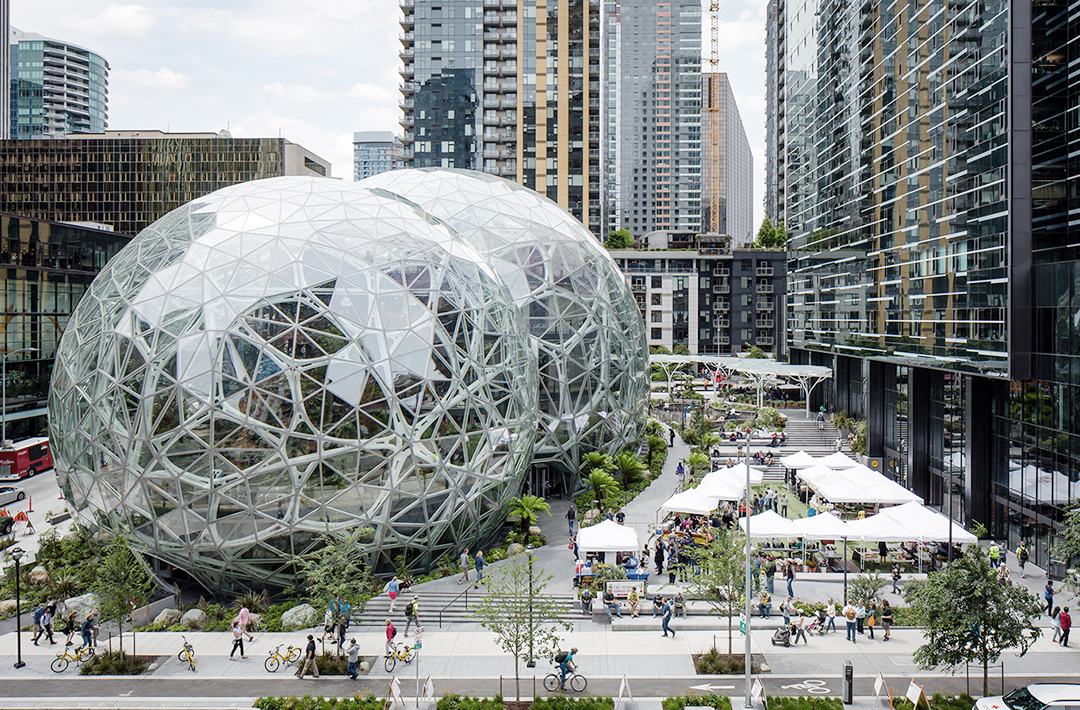 The park and the square for the headquarters campus are open to visitors. Photo by Sean Airhart © Courtesy of NBBJ 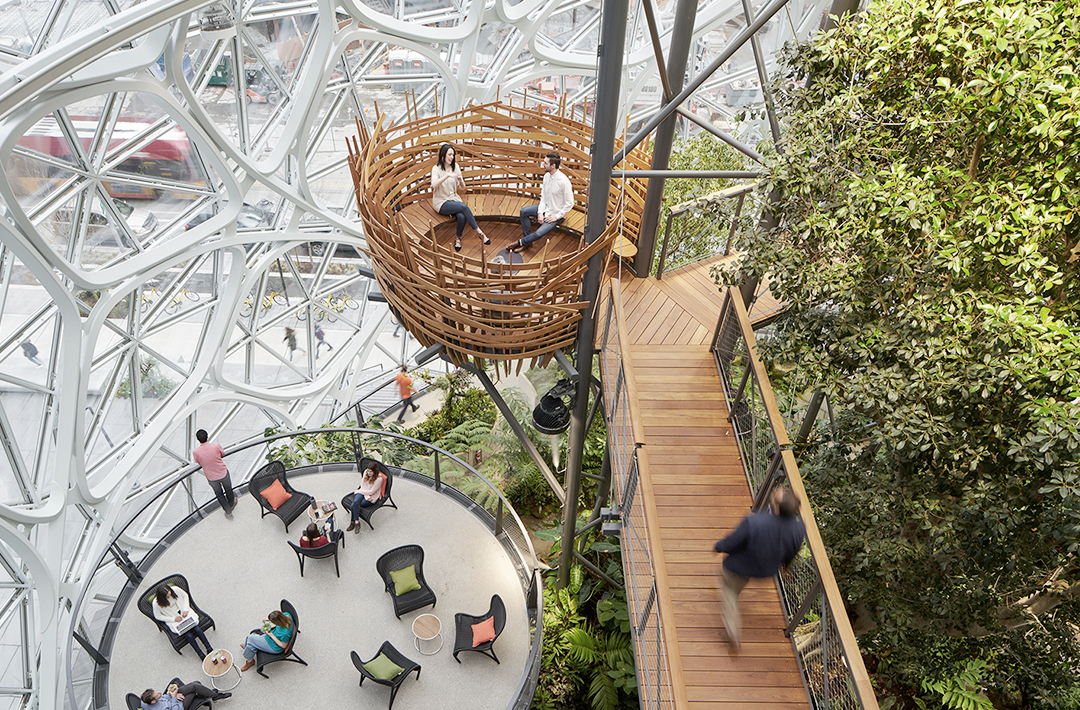 The lounge inside the Spheres, called ‘Birds’ Nest.’ Photo by Bruce Damonte © Courtesy of NBBJ

Rainforest Lowers Stress Level
The concept of ‘Biophilia’ was adopted in the planning of The Spheres. Basically biophilia is a belief that humans are born with an innate tendency to connect with nature. According to studies, humans have a better focus, reduced stress level, and lower blood pressure while they are in a natural environment. A green space, in addition, enables people to have a stronger sense of affiliation to their community. In The Spheres, even the indoor garden has a distinctive concept. The main characters are solely the plants in the rainforest. Found in the high-altitude areas in tropical and sub-tropical climates, the alpine flora can make people feel at ease. 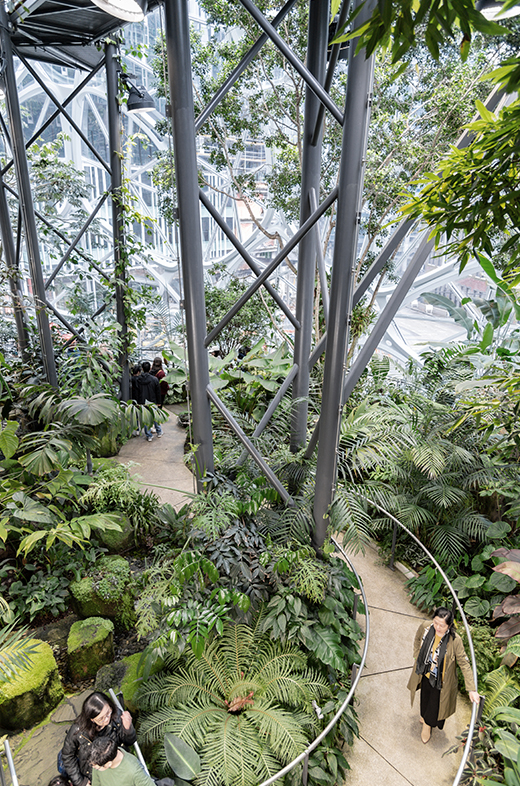 Inside, you can take a walk along plants. © shutterstock 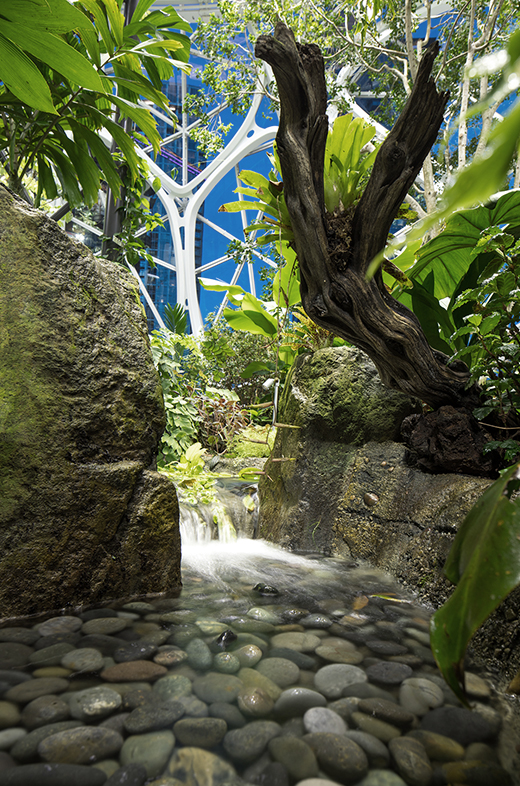 Amazon commissioned its own horticulture team and landscape architectural company Site Workshop to design the arboretum in The Spheres. They went to various other botanical gardens, individual planters, and universities in search of the perfect plants in the course of five years. As a result, about 400,000 cloud forest trees of 400 different species have been collected including some rare and endangered wild species. The next step was to determine whether the trees could adapt well to the indoor environment. The test took place by growing them in a separate greenhouse built in the same size to accurately record temperature, humidity, and sunlight data. On the day of the reveal in January 2018, a lush indoor garden opened its doors to the public. Amazon founder Jeff Bezos’ dream of having “year five on Day 1” had been realized. 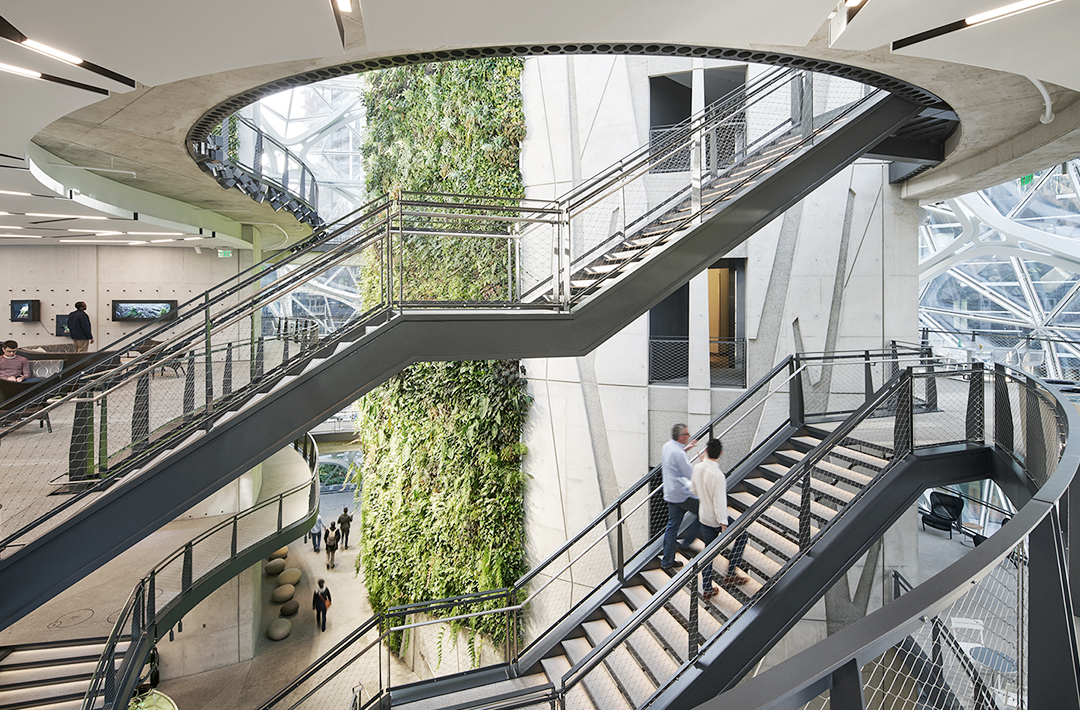 The Spheres is made up of four floors, big enough for the company’s 800 employees. Photo by Bruce Damonte © Courtesy of NBBJ

Vertical Garden Encompasses Four Levels
The Spheres shares its space with the community. It allows public visits twice a month on Saturdays for a tour of the arboretum for those who make an advance booking. The greenhouse is also included in the headquarters tour program which takes place on Tuesdays and Thursdays. It is a special chance to see the plants from all over the world and the working environment of the top global tech firm. One of the most interesting features in the garden is its ‘Living Walls’ which are the largest in the world. It is a vertical garden so to speak, with its tallest wall reaching 19m in height. There’s none other like it elsewhere. The horticulture staff carefully selected a flora that can grow well in a vertical setting, and the arrangement was also meticulously planned. For example, the plants located in the lower section of the Living Wall require less sunlight and nutrition. Instead, it is important to give them plenty of water and maintain a cooler temperature. One Living Wall consists of small panels of 90cm in size, just like a puzzle. In addition, a unique way of growing plants was introduced for the vertical garden. Amazon’s Horticulture Program Manager Ben Eiben came up with hanging pockets as alternatives for pots. The plants are put into secure polyester mesh pockets instead of pots. The innovative method facilitates the water and air circulation.

“A Living Wall is a marriage between technology and horticulture.”
Amazon’s Horticulture Program Manager Ben Eiben 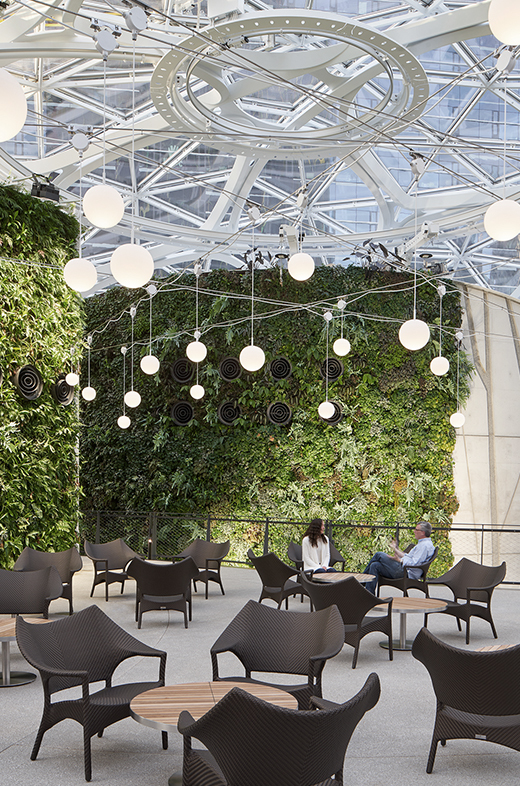 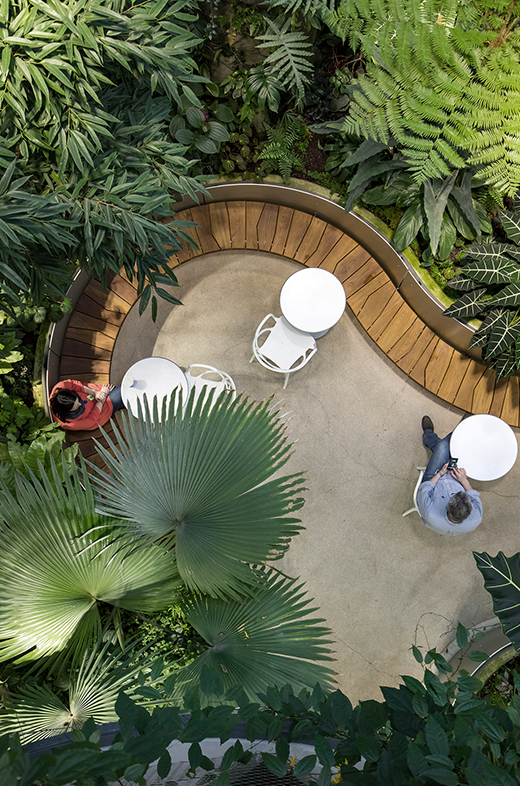 You can pick out your working space depending on the nature of your projects. Photo by Sean Airhart © Courtesy of NBBJ

The largest tree in The Spheres is a ‘Ficus Rubiginosa’ which reaches 15m in height and 16 tons in weight. It was first planted in 1969 at a tree farm in California and recently transported to Seattle on a Russian cargo transportation. Other popular vegetation includes a number of Phragmipedium orchids unique to Central and South America and pitcher plants that are carnivorous insect eaters. Since the opening, ‘Titan Arum’ known as the Corpse flower, which produces a bloom every seven years, has already had the rare blooming event. There is a time-lapse video of this 183cm-tall flower opening its massive petal on The Spheres’ Instagram account. 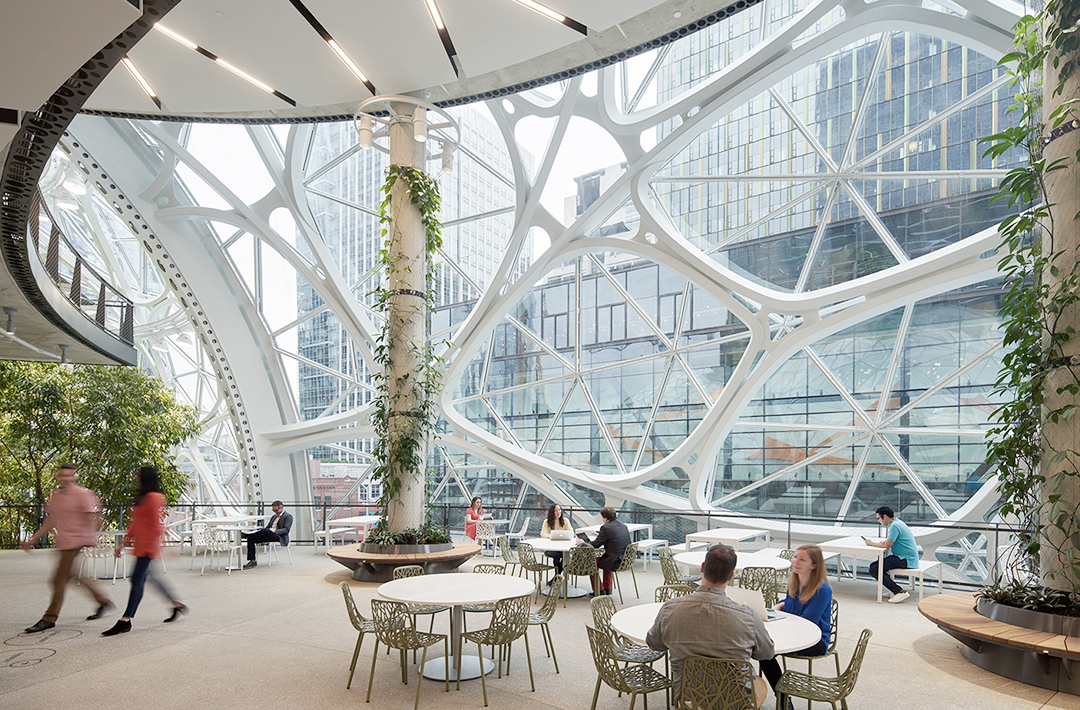 The meeting space offers both natural feelings and view of the city. Photo by Bruce Damonte © Courtesy of NBBJ

3D Façade Made of Glass & Steel
The dome design of The Spheres was adopted to maximize the volume of the structure. Its façade resembles that of three giant, conjoined bubbles with the middle one being the largest. This architectural feat was made possible by U.S.-based global architecture firm NBBJ in charge of the design of the entire Amazon campus. The design team used a pentagonal hexecontahedron which has 92 vertices that span 60 elongated pentagonal faces, one of Catalan solids devised by Belgian mathematician Eugène Catalan. A total of 180 welded steel modules were assembled to create the magical spherical space.
“The Spheres combine the mathematical and the organic, the pragmatic and the poetic.”
Global architecture company NBBJ
Each frame has 2,643 glass panels. These energy-efficient panels also contain a special film inside that protects the plants from infrared radiation and facilitates their photosynthesis. The ring beam at the base of the building plays a pivotal role as it transfers gravity, wind, and seismic forces from the building façade to concrete columns in the floors below. The elaborate design and planning contributed to the completion of the spectacular orbs just 2.5 years since the beginning of the construction. 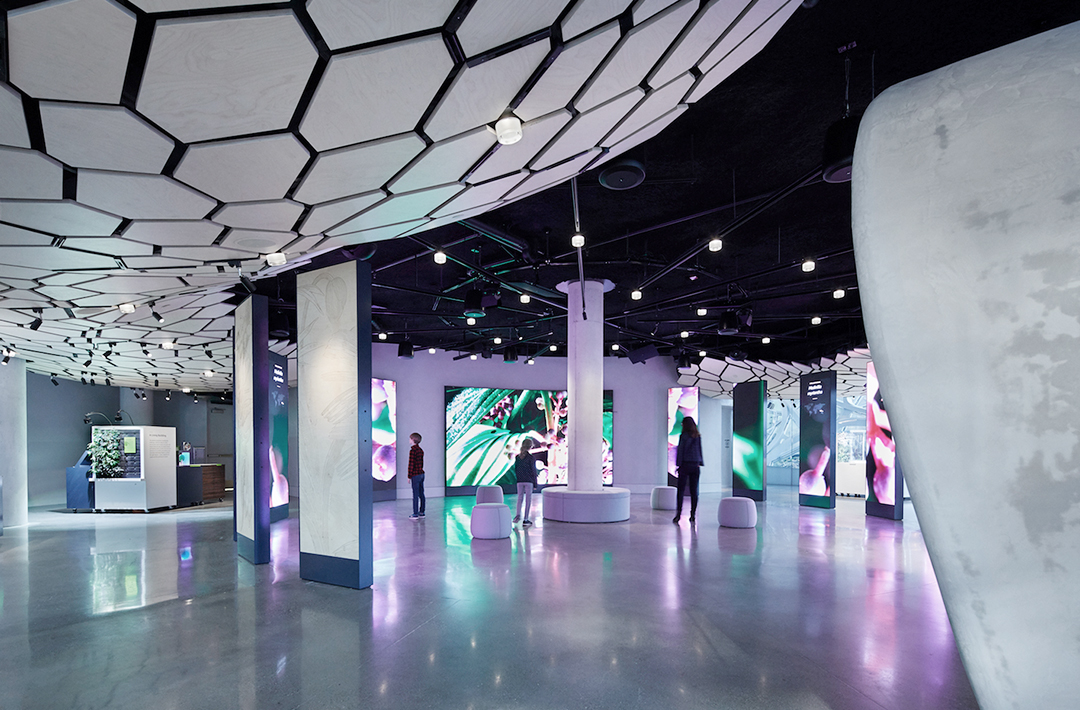 More Visitor Friendly Destinations in The Spheres
The Spheres serves as an office and indoor garden space, but it also has another function. ‘Understory’ is a visitor center below one of the domes. Amazon established the interactive exhibit space to further explain the cutting-edge building to visitors. You can find information on the plants in the arboretum and the science and engineering background regarding The Spheres. A combination of state-of-the-art media technology including a touchscreen interactive offers a unique experience to visitors. The most impressive feature is a generative soundscape. The large video wall will speak to you in a whispering voice the moment you approach it. 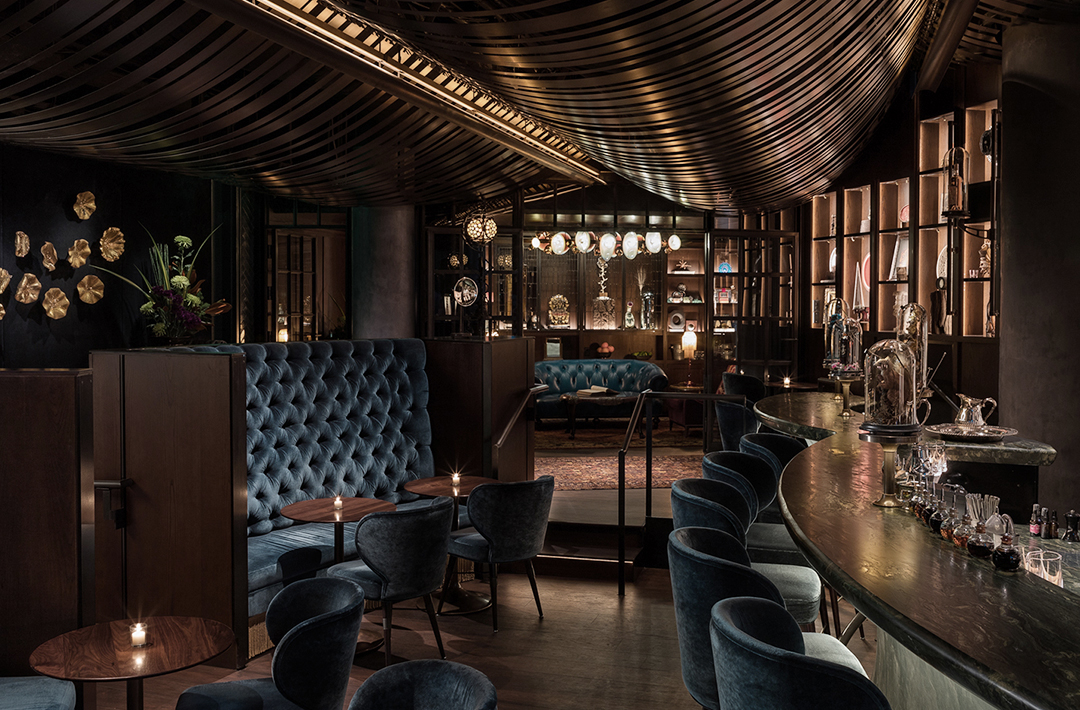 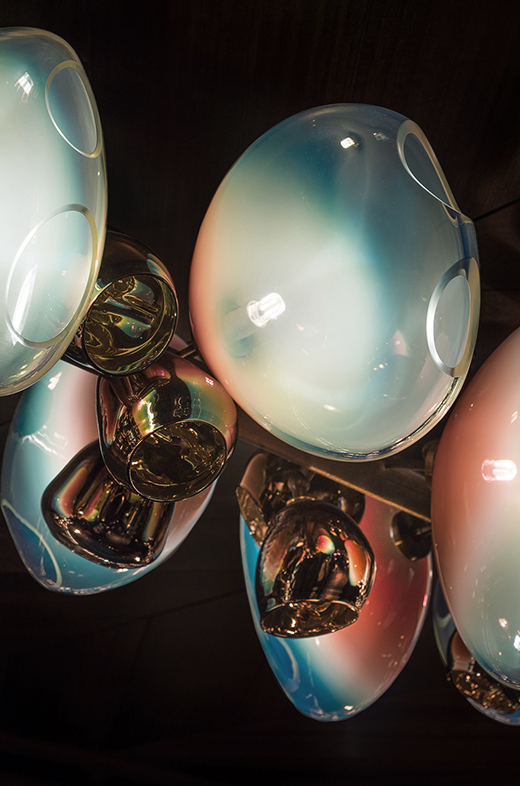 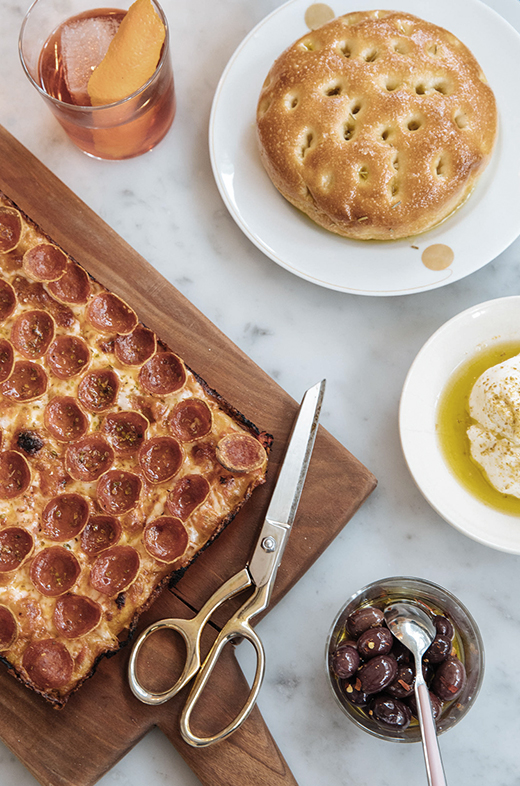 If you are done with exploring, it is time to relax.
The same architectural firm of ‘Understory,’ Graham Baba Architects designed ‘Deep Dive,’ a cocktail bar in a hidden corner in The Spheres. Inspired by biologist Charles Darwin and Jules Verne, author of ‘Around the World in 80 Days,’
Seattle-based celebrity chef Renee Erickson opened the conspicuous bar designed to bring out curiosity and imagination from people. Winner of the 2016 James Beard Award for Best Chef: Northwest, Erickson also owns Italian restaurant ‘Willmott’s Ghost’ in the building. The title takes its name from the flowering plant known as thistle or ‘Miss Willmott’s Ghost’ that Victorian-era botanist Ellen Willmott would secretly plant in her friends’ yards and public places. The design of the restaurant reflecting the geometric shape of the building’s façade was provided by Heliotrope Architects, while the chic interiors was the work of Price Erickson. You can enjoy Roman-style ‘Pizza al taglio’ along with an Italian aperitif cocktail while viewing the cityscape beyond the glass façade.
Address: 2101 7th Avenue, Seattle, WA 98121
Phone: 1-206-266-4064
Homepage: The Spheres 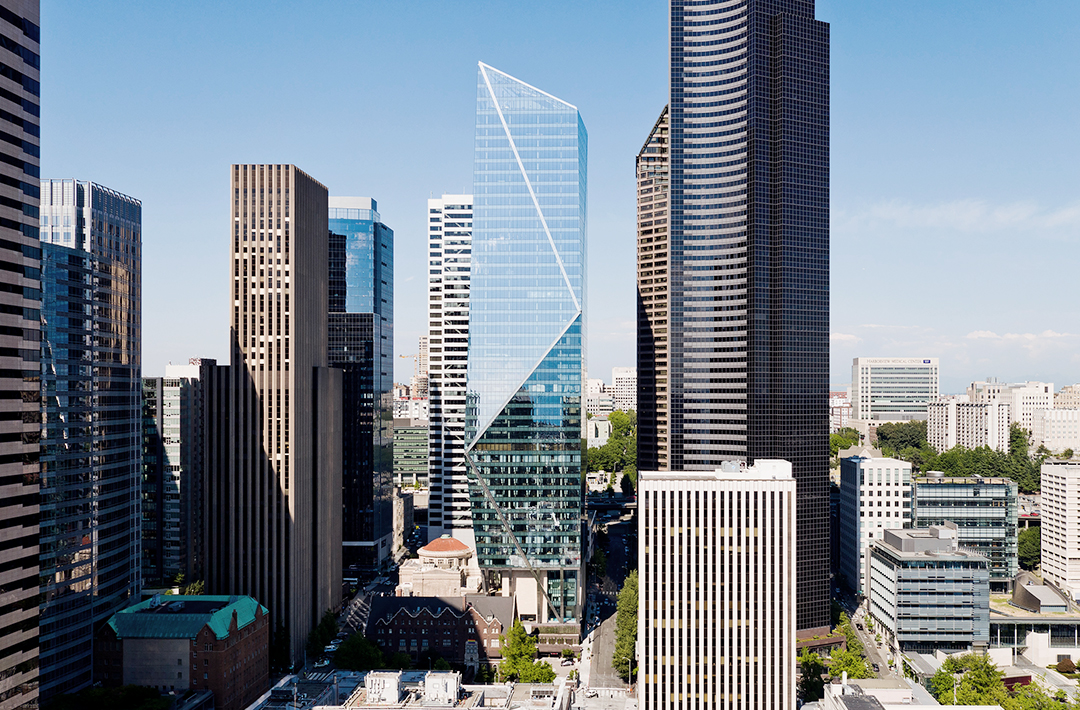 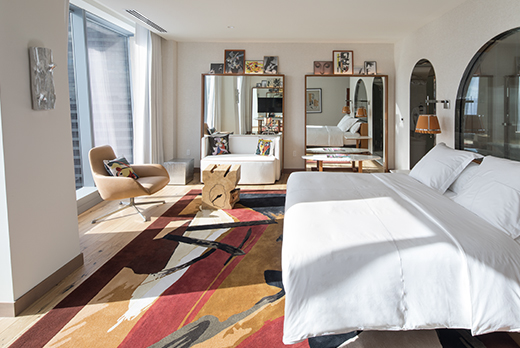 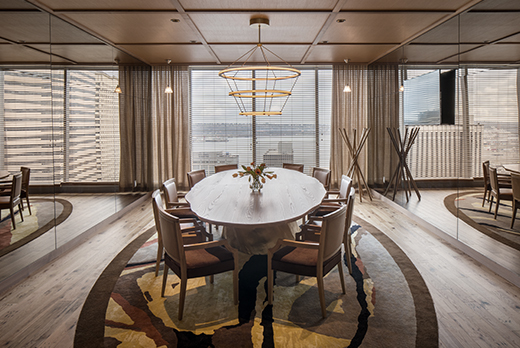 Where to Stay in Seattle: LOTTE HOTEL SEATTLE
Opened in September this year, LOTTE HOTEL SEATTLE is located in a 44-storey building in Midtown on 5th Avenue. The hotel offers a total of 189 rooms and suites designed to reflect the beautiful natural environment of Seattle as well as the city’s creative and modern ambience, and its glass-panel exterior mirrors the surrounding structures and sheds a light on the Seattle skyline. Major tourist attractions such as the Space Needle, Pioneer Square, and Pike Place Market are in the hotel’s vicinity, making LOTTE HOTEL SEATTLE  a great destination for both business and vacation purposes.