Where Time Stands Still, Bagan and Mandalay
Located in the heart of Myanmar, Bagan in the Mandalay Region was the ancient hub of Buddhism and the kingdom culture of Burma. At dawn, bright-colored hot-air balloons rise up in the sky, creating a breathtaking scene above the temples and pagodas that have remained unchanged since hundreds of years ago.
Bagan, Center of Myanmar’s History
About a thousand years ago, Bagan was the first capital of the Kingdom of Burma, which is modern-day Myanmar, and has been the center of global Buddhism. Just like Muslims visiting the shrine of Mecca, Bagan between 11th and 13th centuries was a must-see place for monks and Buddhists in the regions around India and Sri Lanka. It was known as Tambadipa(bronzed country) or Tattadesa(parched land) by outsiders. Even though time has passed, there are still historic remnants in Bagan, attracting religious travelers and tourists from around the world. 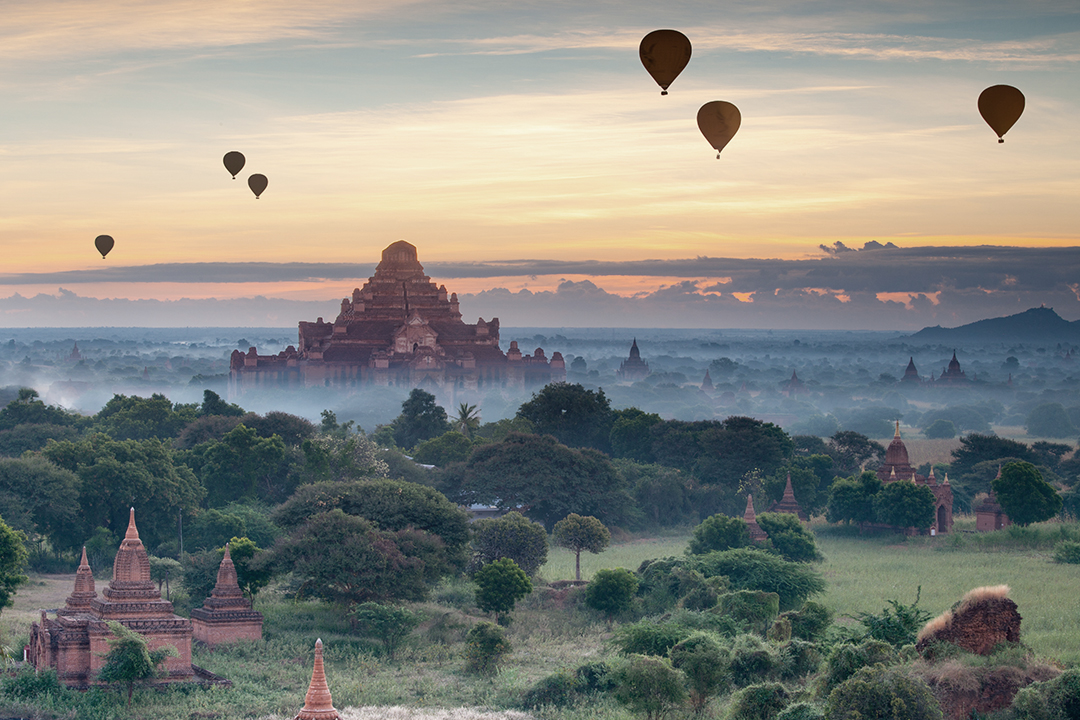 Most of the relics in Bagan are temples and pagodas. Across the 42k㎡-wide plains, over 2,200 structures survive to the present day. The tallest stupa, a pagoda with a chamber inside, is 61m in height. At the peak of prosperity, Burma had nearly 5,000 stupas. Today, many of them are deserted, collecting only dust and rust.
Buddhist temples in Bagan are largely divided into zedi and patho structures. Zedis have brick walls on all four sides, which blocks entry. Inside pathos, on the contrary, religious murals attract people. 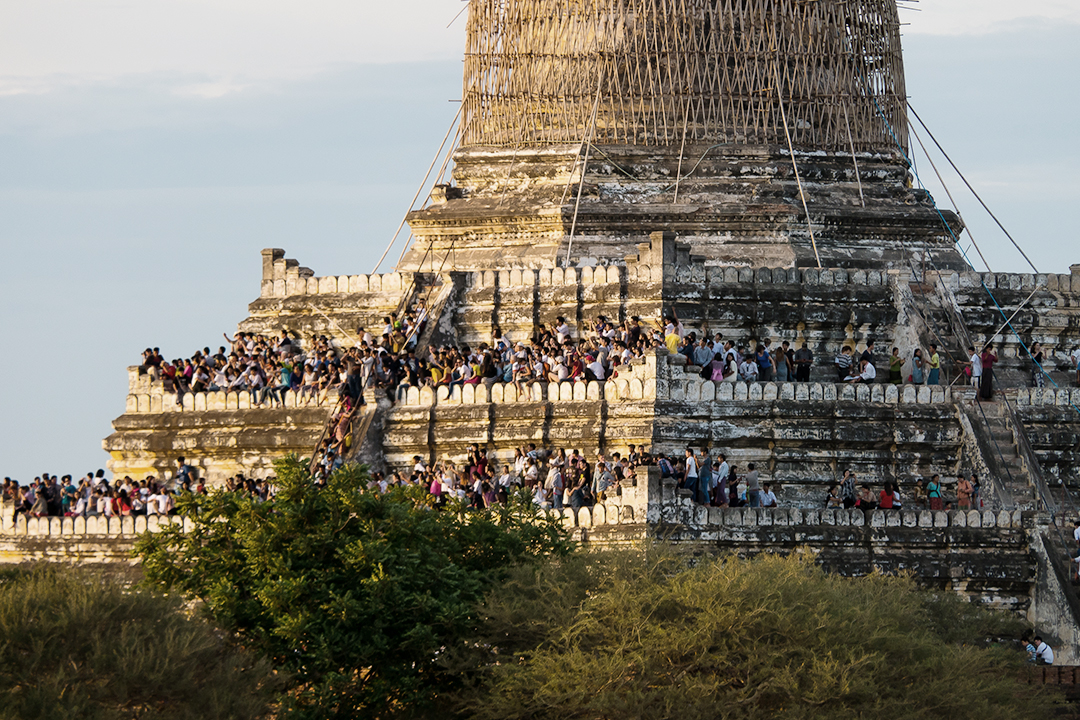 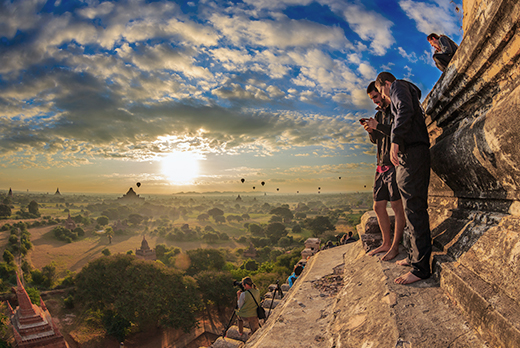 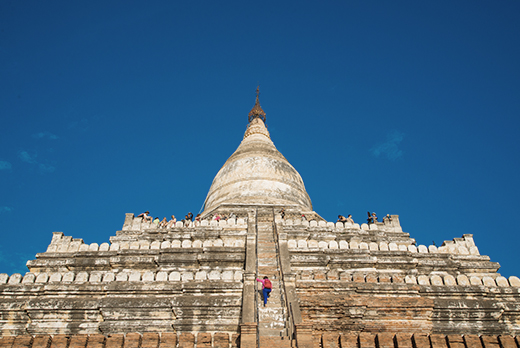 Shwesandaw Pagoda Offers Sunset Views
The best place to view Bagan plains is the Shwesandaw Pagoda. It was built in 1057 by the order of King Anawrahta who founded the Pagan(Bagan) Empire. Being in a location offering great views of the plains and the temple, it is a popular tourist destination for sunrise and sunset watching as well. The movement of the sun transforms the look of massive plains instantly, creating a spectacle. Some areas, however, have been off limits for repair work that started after the 2016 earthquake. 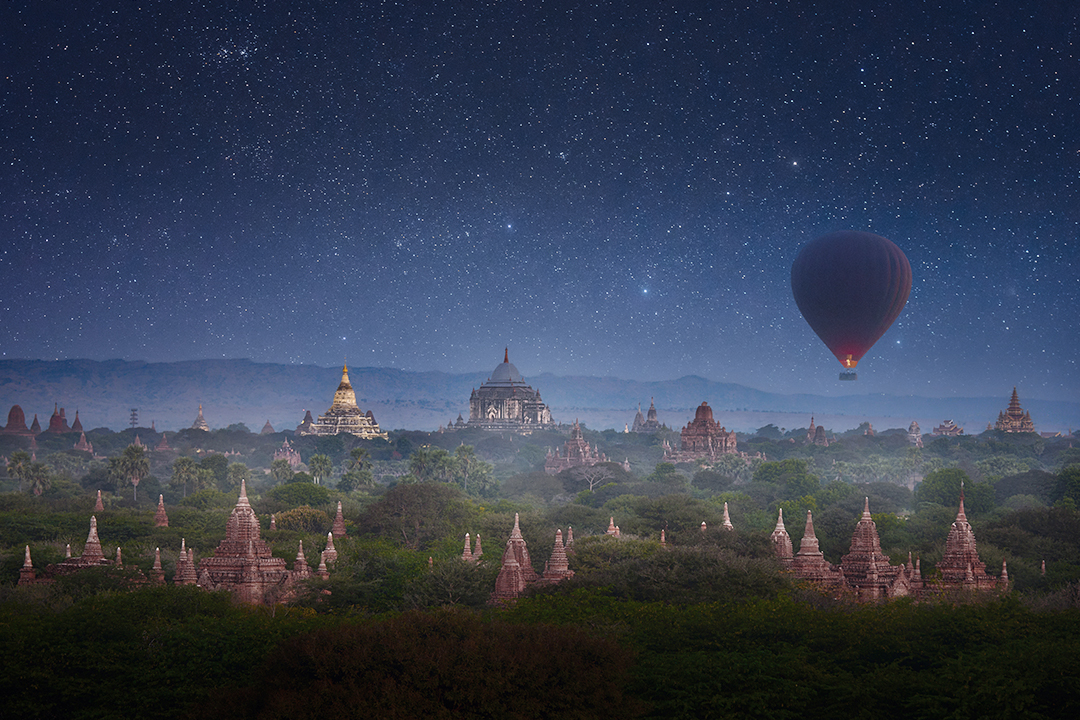 Hot Air Balloon Rides in Bagan
Another way to enjoy the city of Bagan is through a hot air balloon. If you join the early morning ride, you can see glowing golden pagodas as the sunlight shines on them. Bagan’s hot air balloons are operated twice a day - before sunrise and around sunset. The experience programs are open only from October through March and they are closed from April when the rainy season begins. Tickets are available at a rather high price of $250 a person(280,000 Korean won), but the charm of having a bird’s-eye view of the historic city of Bagan is hard to resist. 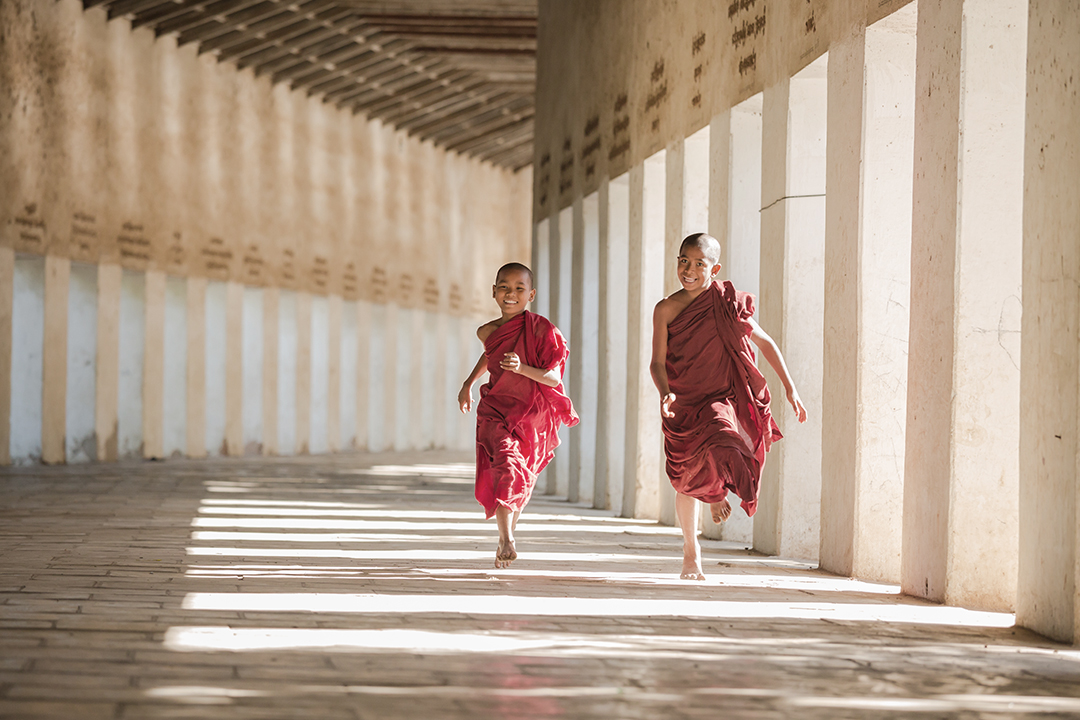 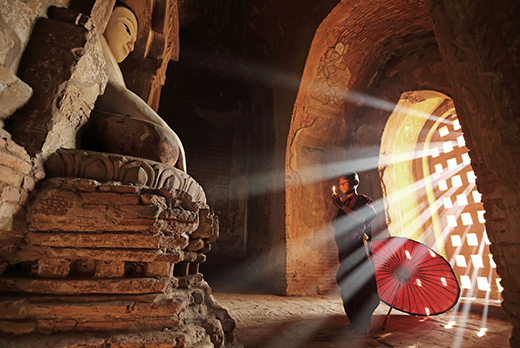 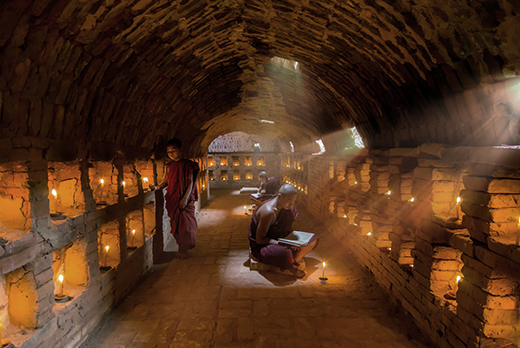 Monastic Trainees Living in Temples
Becoming a bonze does not mean the child is no longer a child. They still want to play outside, run around, and chat with their friends. About 90 percent of the Myanmarese population are Buddhists. With over 50,000 temples and 400,000 monks, people of Myanmar have shown unrivaled affection for Buddhism. Naturally, there are quite a few who dream of entering the Buddhist priesthood from their childhood. During the priesthood training, the acolytes are called sramanera. They become bhiku when they turn 20. After an array of courses and tests, they finally become Dhammacariyas(priests) to teach Buddhism. 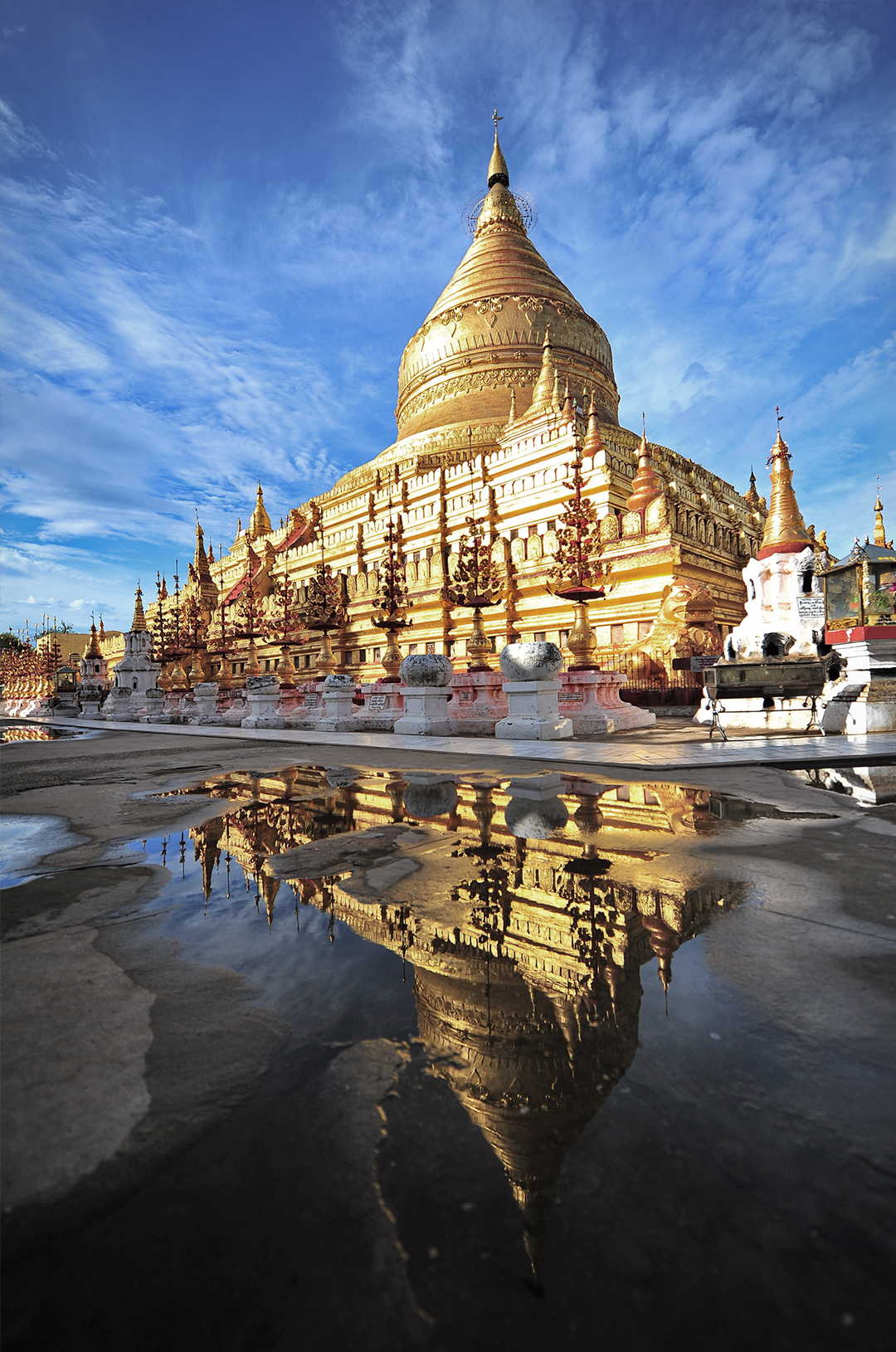 Shwezigon Pagoda
The Shwezigon Pagoda is famous for its enshrinement of Buddha’s bone and tooth which attracts a large number of Buddhist visitors, along with the fact that the pagoda was the first structure of the Pagan Empire. The cone-shaped golden pagoda was built by King Anawrahta following his conquest of the Thaton region. Completed in 1085, the temple is currently Bagan Monument No. 1.

There are nine wonders related to the Shwezigon Pagoda that still intrigue people today. Some of them are as follows:
‘The shadows of the precinct walls do not change position.’
‘Papers that hold gold foils are dropped from the height of the Pagoda after gliding, but they never land outside the precinct.’
‘Big drum being beaten on one side of the Pagoda cannot be heard on the other side.’
‘There are in the precinct Khaye trees or Chayar trees which bloom all the year round.’ 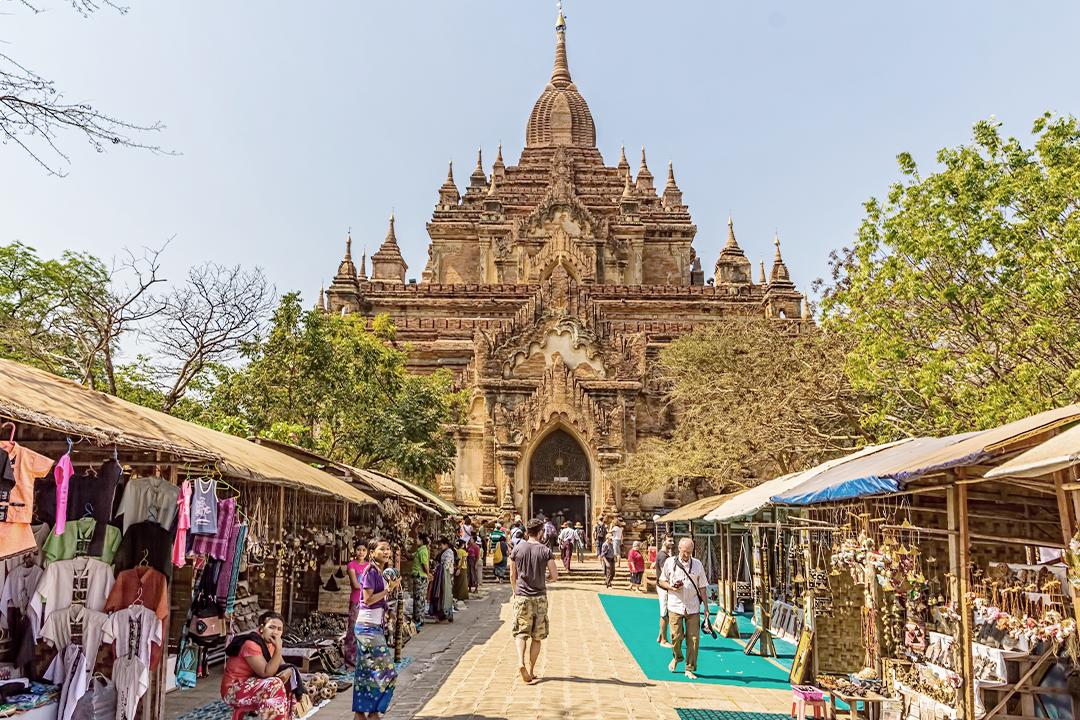 Htilominlo Temple
Meaning ‘as the umbrella wants,’ Htilominlo Temple is located 2km away from Old Bagan. Built with red bricks, the temple appears reddish overall. On the interior walls, large elephant murals are found. Whereas the Shwezigon Pagoda was blocked off from entry, being a zedi shrine, Htilominlo Temple is a patho shrine where entrance is allowed. A variety of street vendors and stores are available near the gate of the temple, selling souvenirs and accessories. 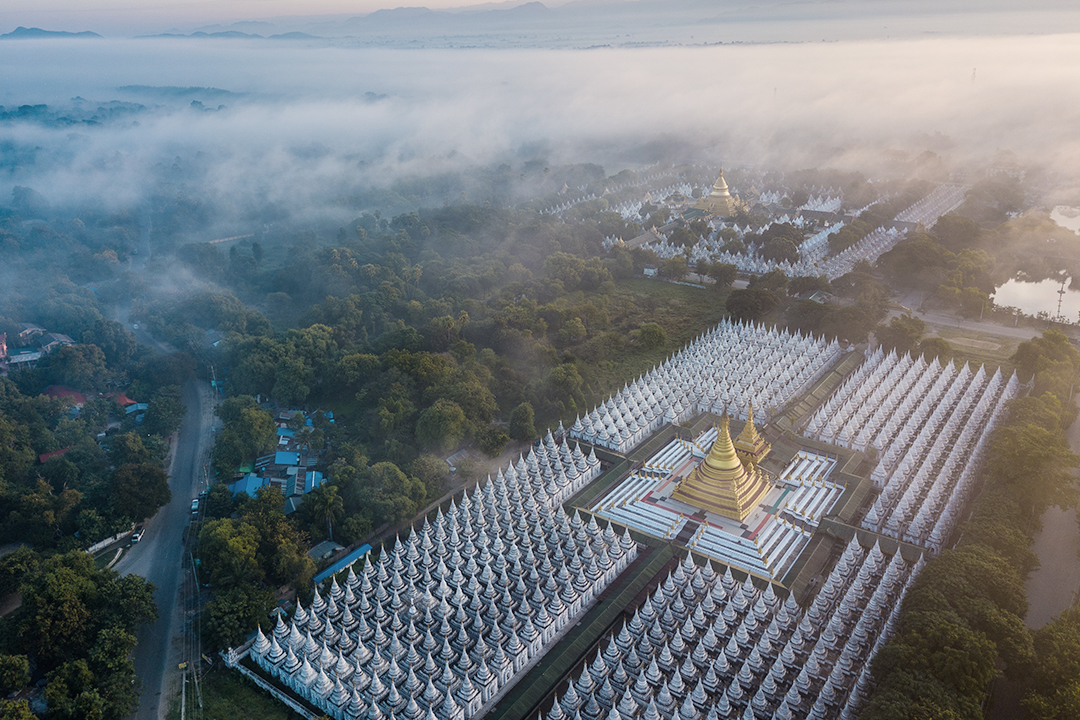 Mandalay
If Yangon is the commercial and political capital of Myanmar, Mandalay is the cultural and Buddhist capital. Mandalay was the capital of the Konbaung Dynasty, the last royal regime before the land was taken by British India in 1885 after the Third Anglo-Burmese War. The previous capital city was Amarapura, but the relocation took place as King Mindon believed the prophecy that a great city would appear in Mandalay.
The majority of tea leaves produced in Myanmar is traded in Mandalay. Brewery businesses and gold leaf manufacturers are also based in this region. 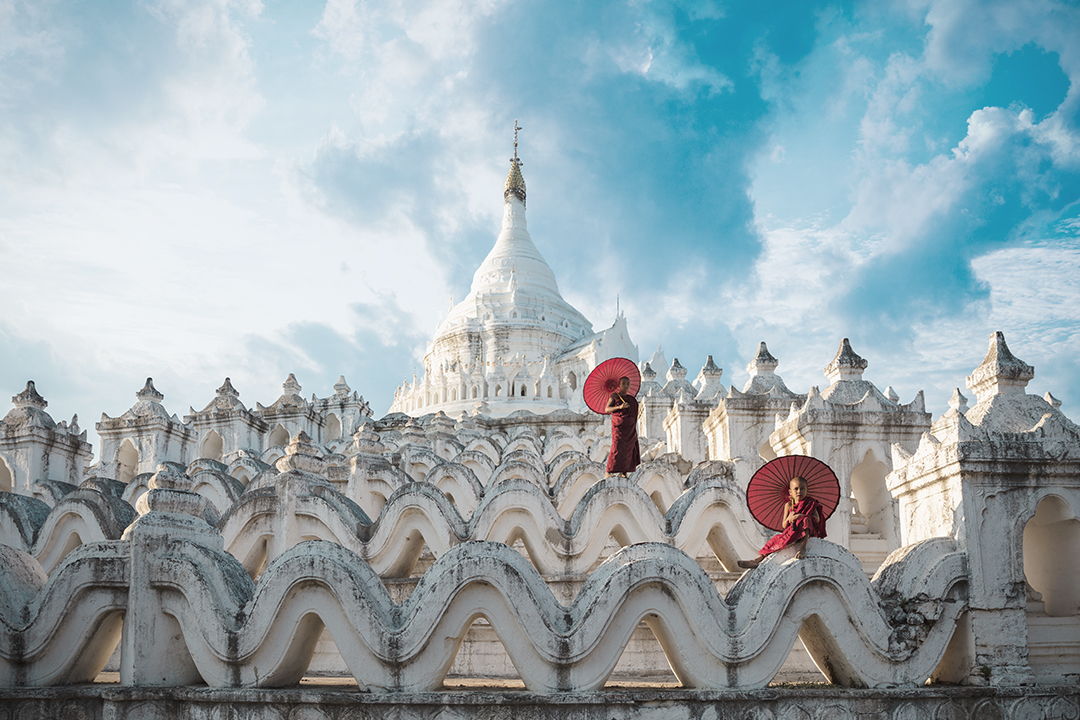 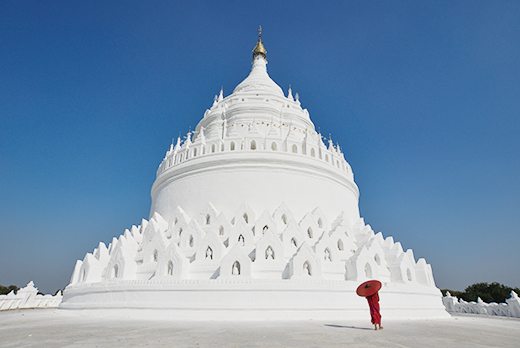 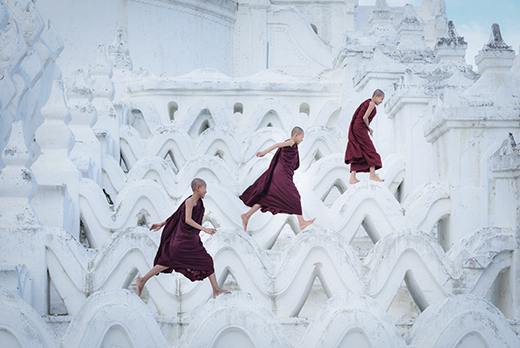 Kuthodaw Pagoda
Its official name is Mahalawka Marazein. Construction began during the King Mindon era, and the pagoda took 25 years to be completed in 1857. Inside 729 white pagodas is the world’s largest book - stone tablets inscribed with the Tripitaka and other Buddhist texts. 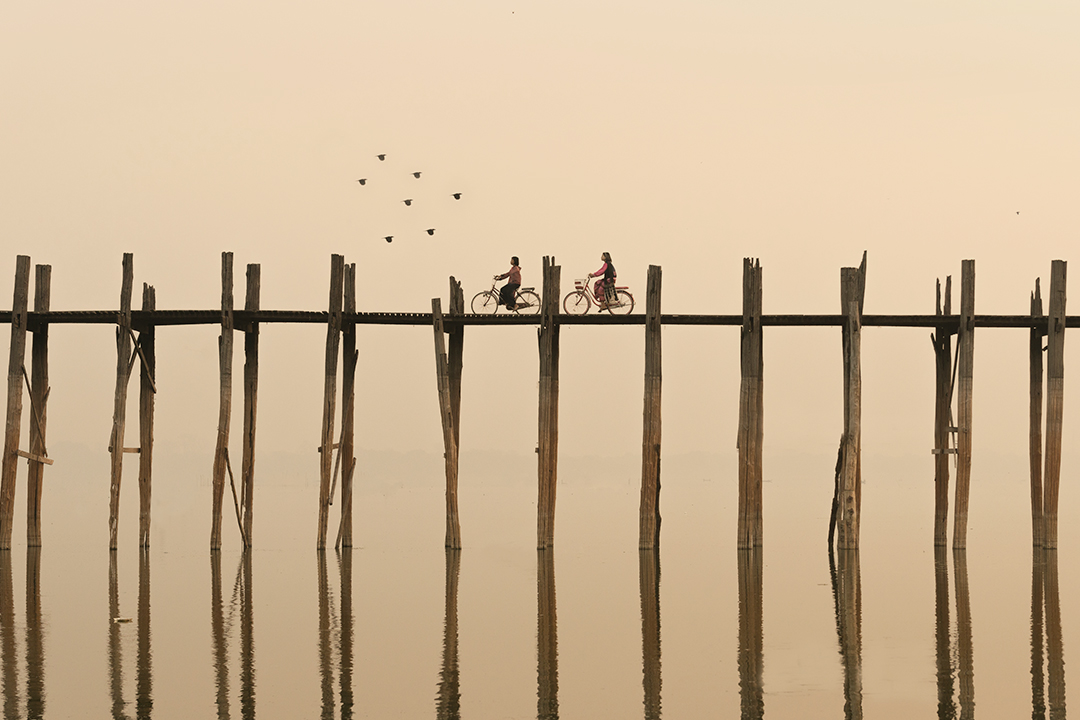 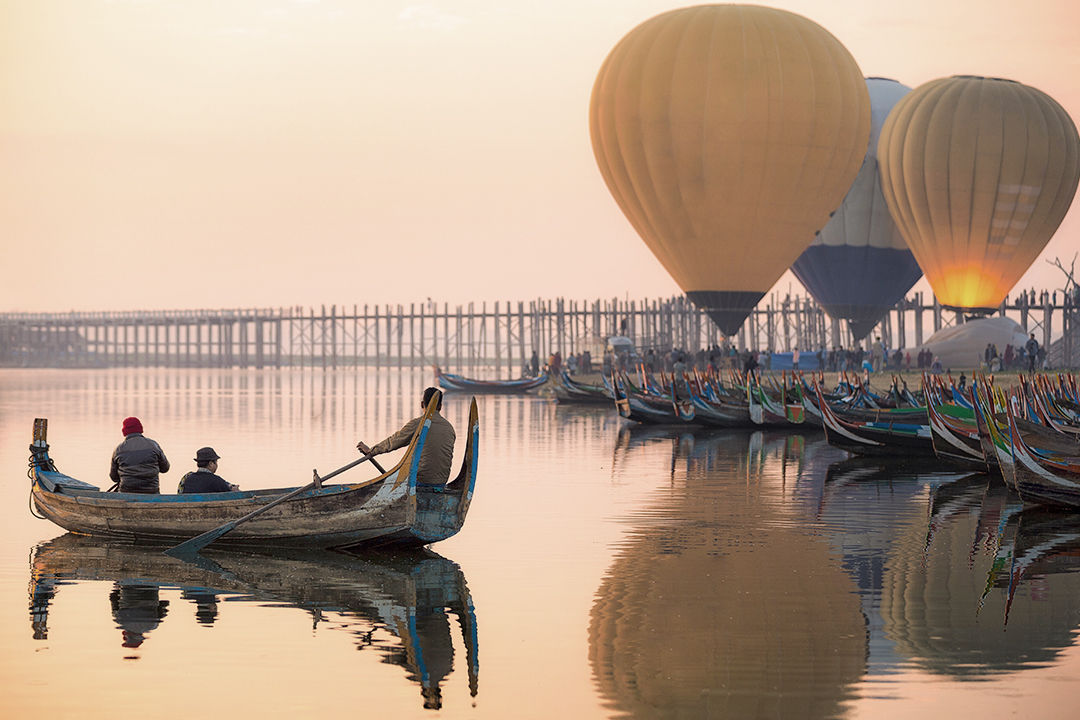 U Bein Bridge
U Bein Bridge is the world’s oldest and longest teakwood bridge spanning 1.2km over the Taungthaman Lake located in southern Mandalay. The ancient bridge used 1,086 pillars made of teakwood that had been left over from the construction of Amarapura Palace. The name of the bridge is taken from then mayor of Amarapura who had it built. Being a popular sunset viewing location, the bridge is always crowded with tourists who are waiting for the sunset. 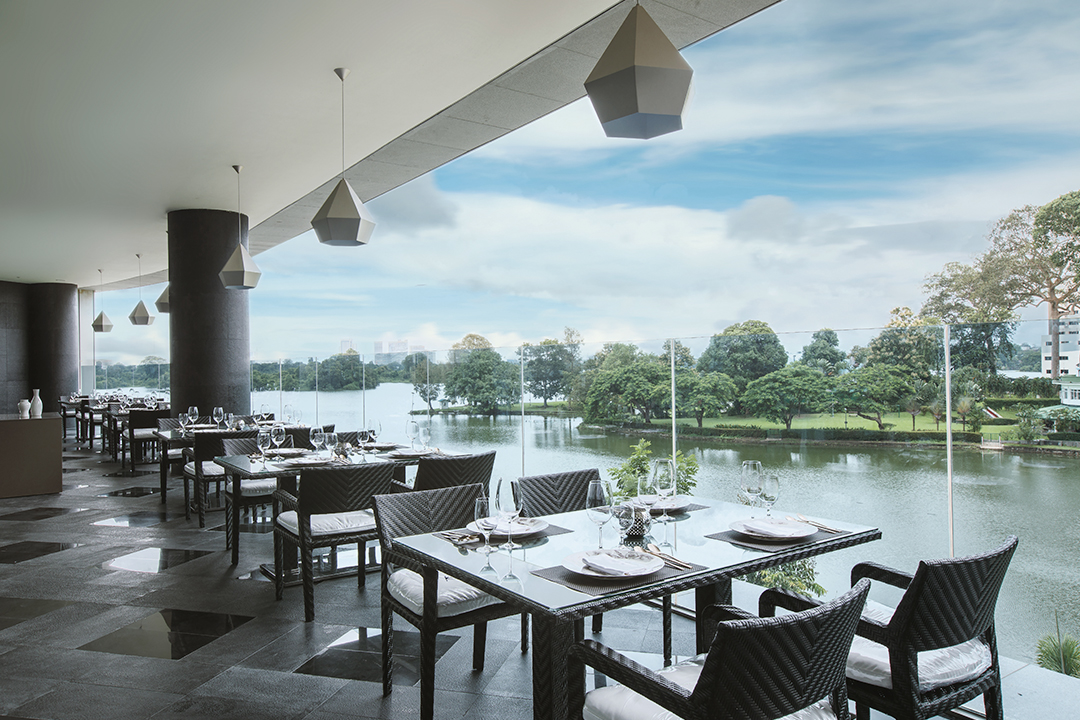 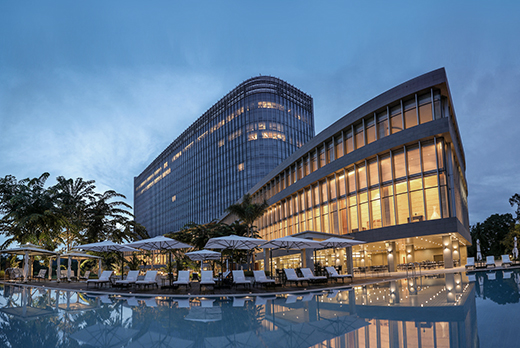 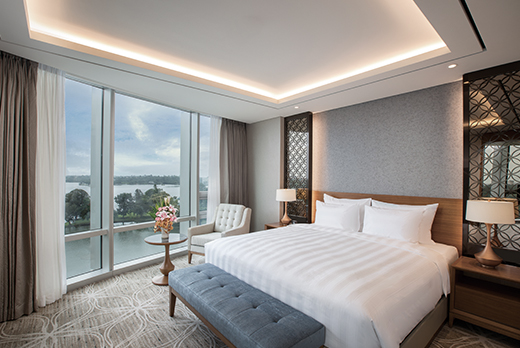 Where to Stay in Yangon: LOTTE HOTEL YANGON
LOTTE HOTEL YANGON is located north of the sacred Shwedagon Pagoda and on the western bank of Inya Lake, the biggest park areas in Yangon. Including sophisticated rooms and suites overlooking the lake, the hotel provides facilities for large-scale events, ballrooms for seminars, and various restaurants. Its outdoor infinity pool, cabanas, and a poolside bar guarantee the most relaxing break you’ve been hoping for.
Address No. 82, Sin Phyu Shin Avenue, Pyay Road, 6½ Mile, Ward 11, Hlaing Township, Yangon
Phone +95-1-935-1000
Homepage www.lottehotel.com/yangon-hotel