Youth in St. Petersburg Flock to Novaya Gollandiya
St. Petersburg, the symbol of the ‘Russian classic,’ is also home to the island of the most contemporary and sophisticated design. Today, Novaya Gollandiya is the hippest place in town for young people in St. Petersburg.
Novaya Gollandiya is the Russian term for New Holland. So why is it called so? Learning the background will help you develop a better understanding of the island.
Prelude to Russia’s Glory Days
In the 17th century, Russia was on the periphery of Europe. It was thanks to Peter the Great’s Westernization policy that allowed Russia to learn more about the rest of the continent. The emperor took a particular interest in the Netherlands and Britain. For about 18 months between 1697 and 1698, Peter the Great took a delegation of about 300 on a trip through Europe. They spent 10 months in the Netherlands alone.
The Netherlands was enjoying its golden years then. It had reached into the Americas and Japan through trade, which allowed it to accumulate considerable wealth. The Netherlands also made tremendous progress in military, economy, art and literature. How could a small country, with a quarter of the territory is underwater, become such a well-off nation?
Driven to build Russia into a power state, Peter the Great at first got to translating Dutch books. Volumes on shipbuilding, navigation and medicine were made available in Russian. The emperor himself took part in university anatomy training.
Peter the Great was most keen on reforming the military system. The Dutch’s considerable power lay in its powerful navy. In order to trade with the entire world, they had to fight rivals and protect their merchant vessels from pirates. A strong navy was a must. For all its landmass, Russia didn’t have an ice-free port. They turned their eyes to the Black Sea, but Turkey stood its ground. Russia then chose to explore the delta region near the Neva River by the Baltic Sea. It was the birth of St. Petersburg.
"The foundation of this new town was laid… in hopes it might one day prove a second Amsterdam or Venice.”
Charles Whitworth, Inaugural British Ambassador to Russia, 1710 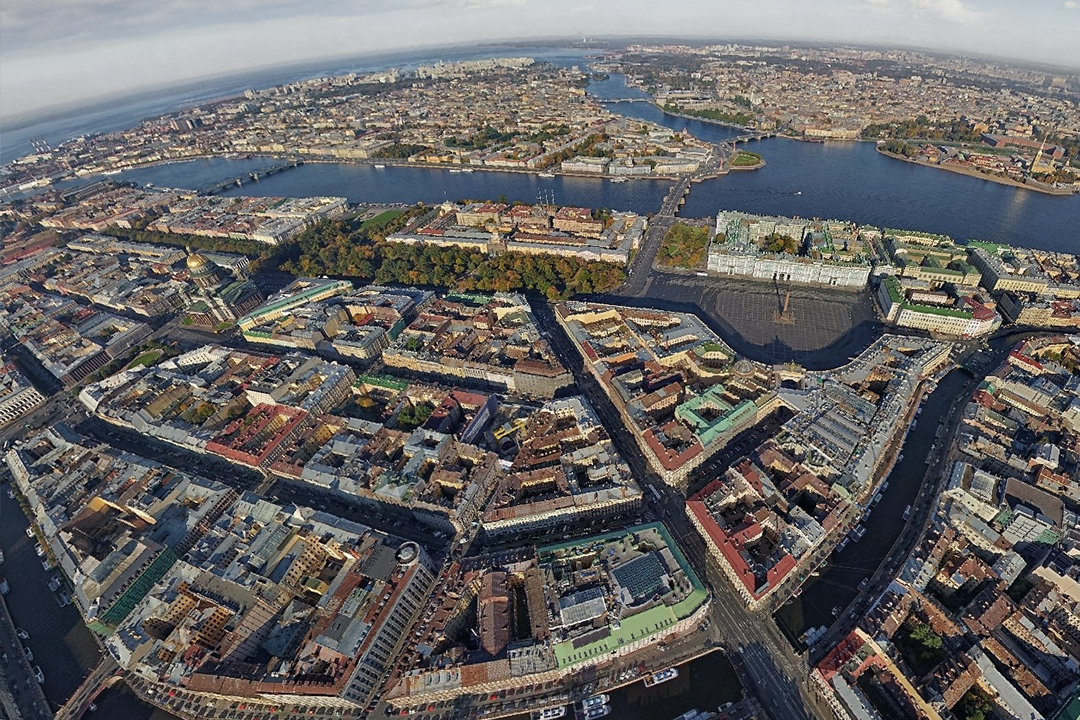 Around the Neva River in St. Petersburg

Building St. Petersburg and Birth of Novaya Gollandiya
When the founding of St. Petersburg began in 1703, Peter the Great wanted to take a page out of Amsterdam’s admiralty and created one for Russia. He also built a shipbuilding yard to the left of the Neva River and brought in Dutch engineers. The place evoked the image of a Dutch port, and came to be called Gollandiya (Holland). It later became part of the name referring to what is now Novaya Gollandiya, surrounded by the Moika River, Kryukov Canal and Admiralteysky Candal.
Prior to the 18th century, Novaya Gollandiya mostly housed warehouses. New buildings started popping up later, but unfortunately, the first one was a prison. The naval prison, erected in the mid-19th century, was known as ‘bottle’ because of its round shape.
Novaya Gollandiya played a crucial role in the development of the Russian navy. In the late 19th century, Dmitri Mendeleev, famous for the periodic table, led the efforts to build Russia’s first large water tank. It later became the main pond in Novaya Gollandiya.
The warehouses destroyed in fires and wars had to be rebuilt. After some point, though, they suffered irreparable damage. Then in 1977, architect Veniamin Fabritsky proposed using the buildings for cultural purposes, only to see the idea go nowhere with the collapse of the Soviet Union. Neglected and abandoned, the island grew into a ghost town for St. Petersburg residents. 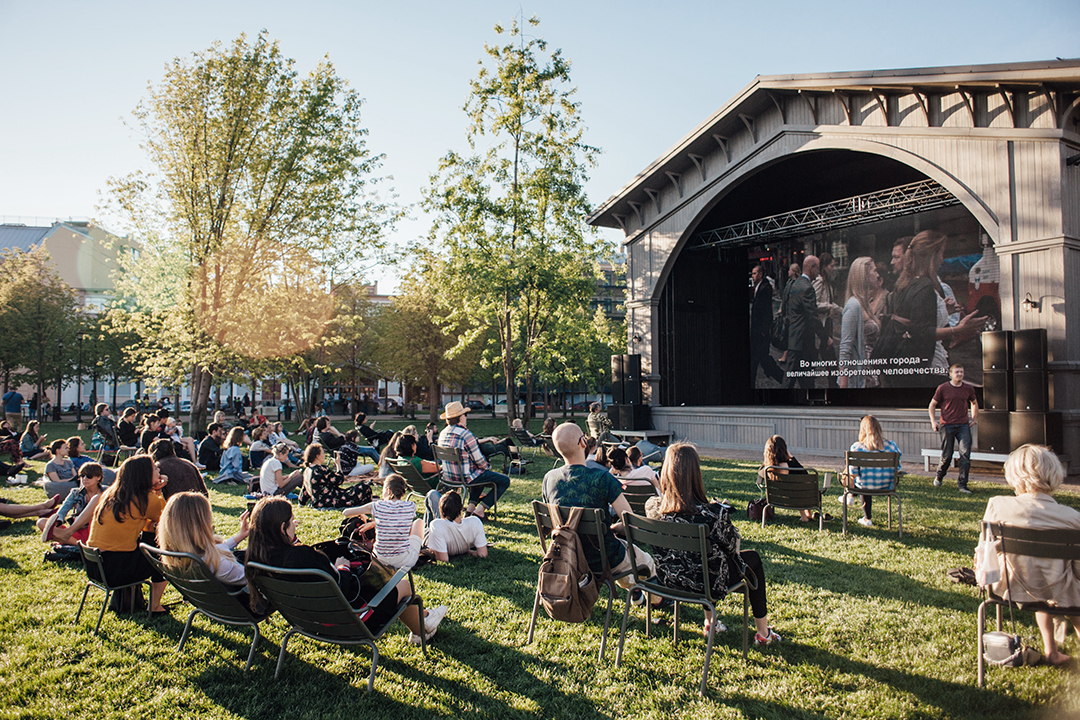 Visitors to a film festival 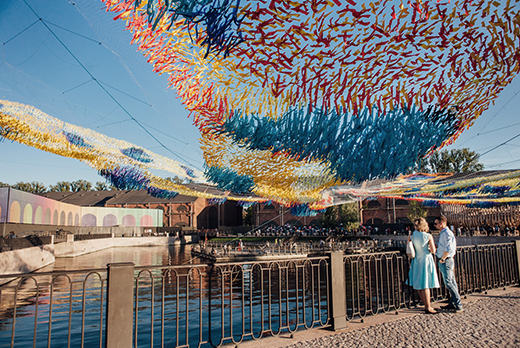 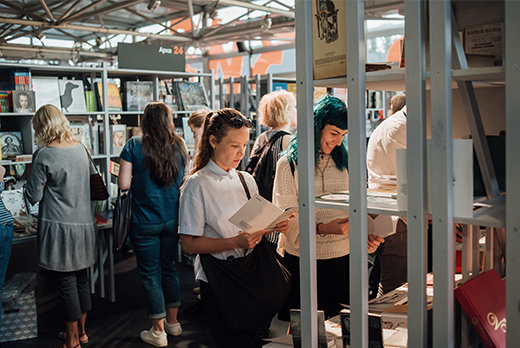 Readers at a book festival

Makeover for Ghost Island
Despite rumors of ghosts, the otherwise pretty island in the heart of St. Petersburg couldn’t be left alone forever. The bidding for the restoration and remodeling project opened in November 2010. World-renowned architects and urban planners would enter the competition.
At the same time, a research project titled ‘Summer in New Holland’ was launched to determine potential visitors to the site. The empty lot, far from the construction site, was reborn as a summertime park that hosted a series of cultural events. It was a massive success. The island that people once feared was haunted drew more than 700,000 visitors between 2011 and 2013. That experimental run proved that Novaya Gollandiya could be transformed into a new destination for culture, art, concerts and leisure. 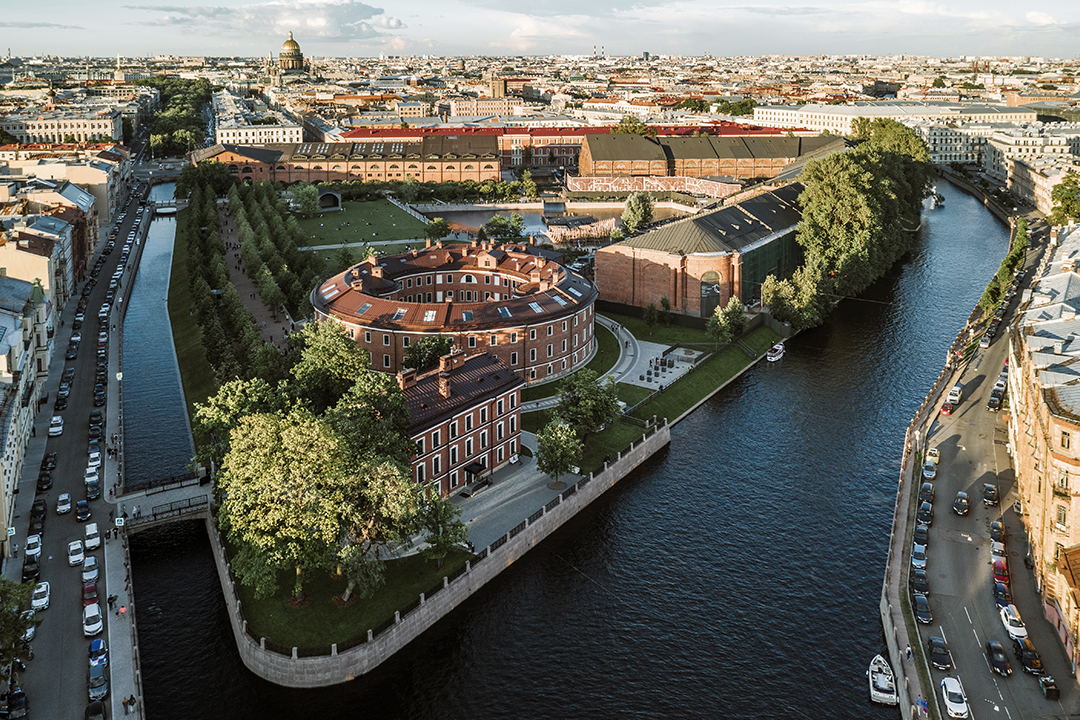 The main objective of the revival was to maintain the frame of the warehouse buildings while successfully turning them into cultural spaces. Red bricks would be preserved the best they could, and where needed, bricks of the same specifications had to be produced.
The island is divided into Park, Foundry, Commandant’s House, Bottle House and House 12.
The Park takes up the largest amount of land, essentially covering the entire island. It features a pond, a playground, a reed forest, an amphitheater, petanque (a French game of marbles) courts, the Pavilion, kiosks and walking trail. During the winter, an ice rink takes a spot, too.

The Foundry, the mid-19th century building that was severely damaged, was at the top of the list for restoration. Some serious work was done to repair the brick vaulted ceilings and the façades of the building. The roof is brand new, and the two entrances have been replaced with iron legs and cast iron canopy.
The old blacksmith building now houses a club and a restaurant that have become the center of social and cultural activities.
During the COVID-19 pandemic, a building like this can be a second home for people. They can go there to eat and drink, and also hold business meetings or just relax. 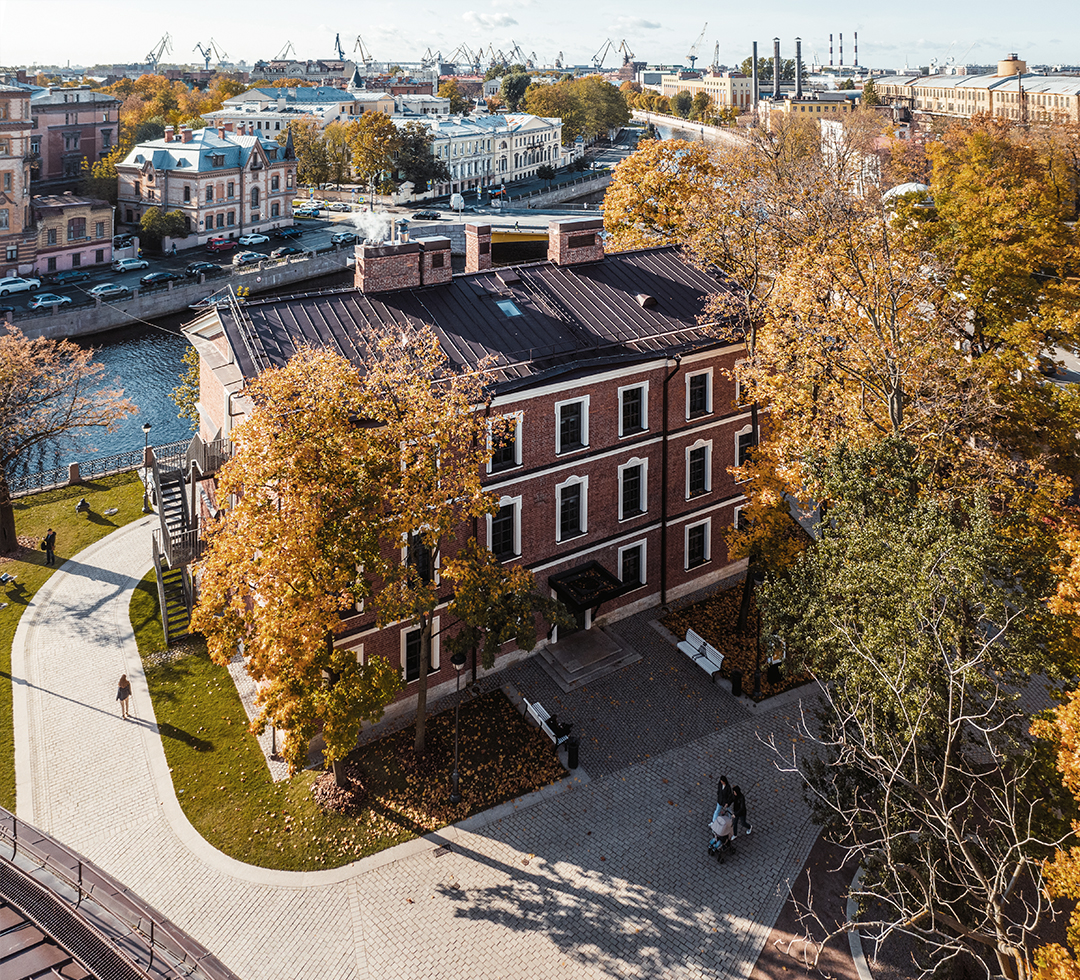 The Commandant’s House is now for visiting families.

The Commandant’s House
It is the most recent building to go up on the island. The navy commandant’s family used to live in that house. During the Soviet era, it was used as a navy administration office before being awarded the status of monument in 2013. The remodeling gave it cast iron canopies, a metal fire escape and a modern interior. The key feature of the remodeling was enhanced communication for families. The first floor is named ‘Children Talk,’ a space for parents and kids aged five years or younger. Children can interact and socialize with each other or work with professional instructors in a large space equipped with educational toys. They can also learn practical skills, artistic activities or just read and relax. 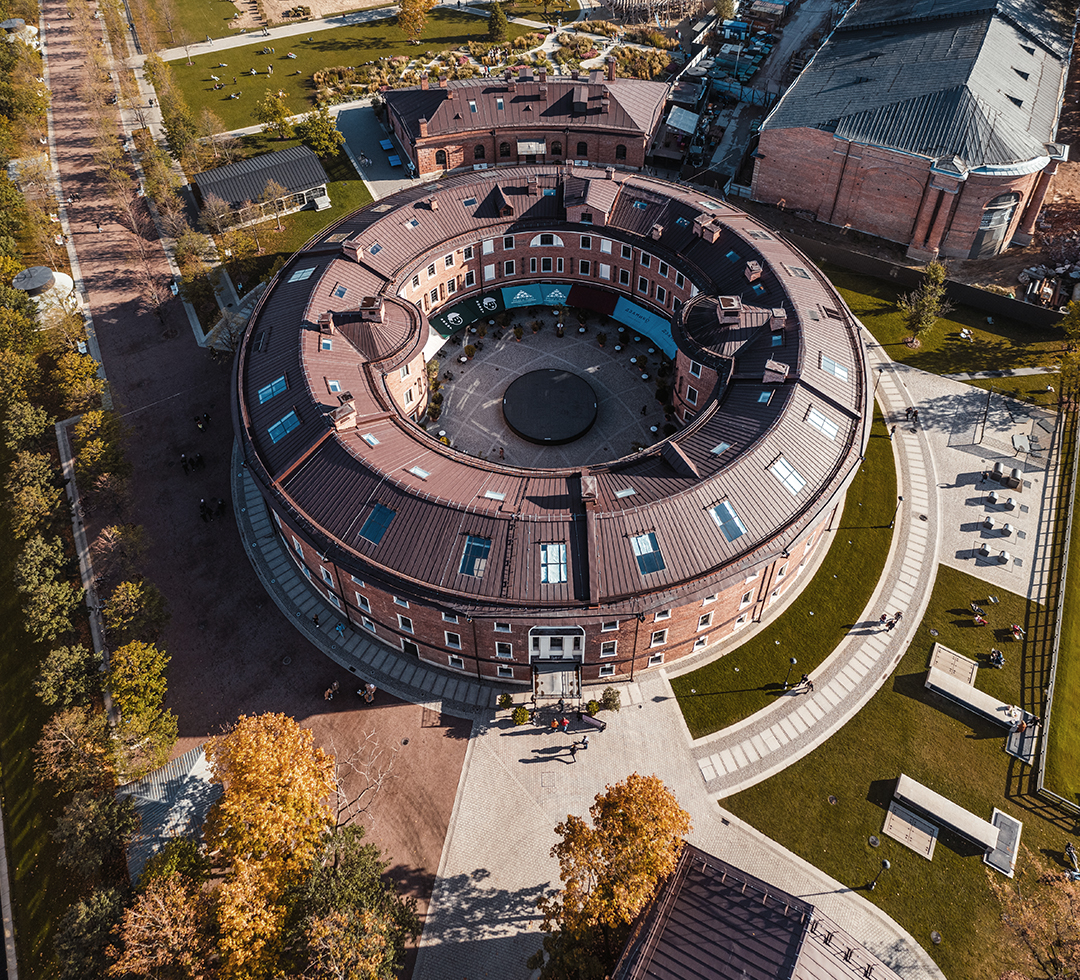 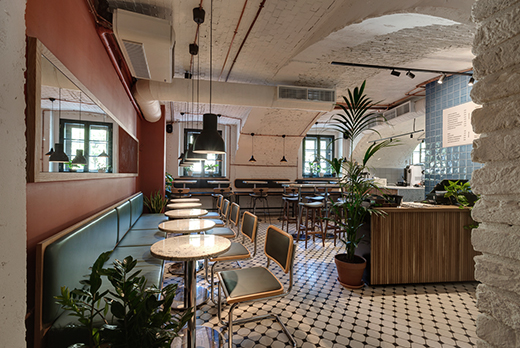 Bottle House is being used as a multipurpose, interactive space. 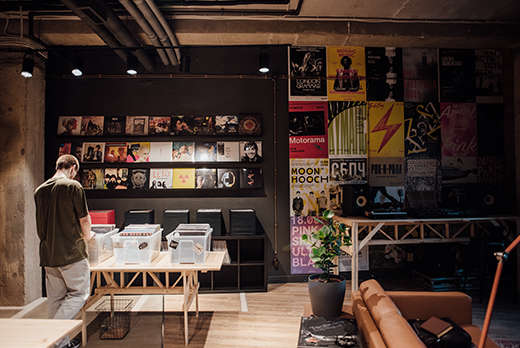 Bottle House
Given its modern interior today, you couldn’t guess Bottle House was once a naval prison. The first floor is reserved for gastronomy, where projects for time-tested and new restaurants are carried out. On the second floor, you can browse through art albums and comics, or pick up printed t-shirts and eco-friendly toys and chairs. The third floor is reserved for health, beauty and sports-related activities. Go get your hair and nails done, take yoga or ballet lessons, take up boxing or get pedaling on bikes. On that same floor, Diana Vishneva, a former Prima ballerina with Mariinsky, runs ‘Studio Context,’ a ballet and contemporary dance studio for aspiring dancers. 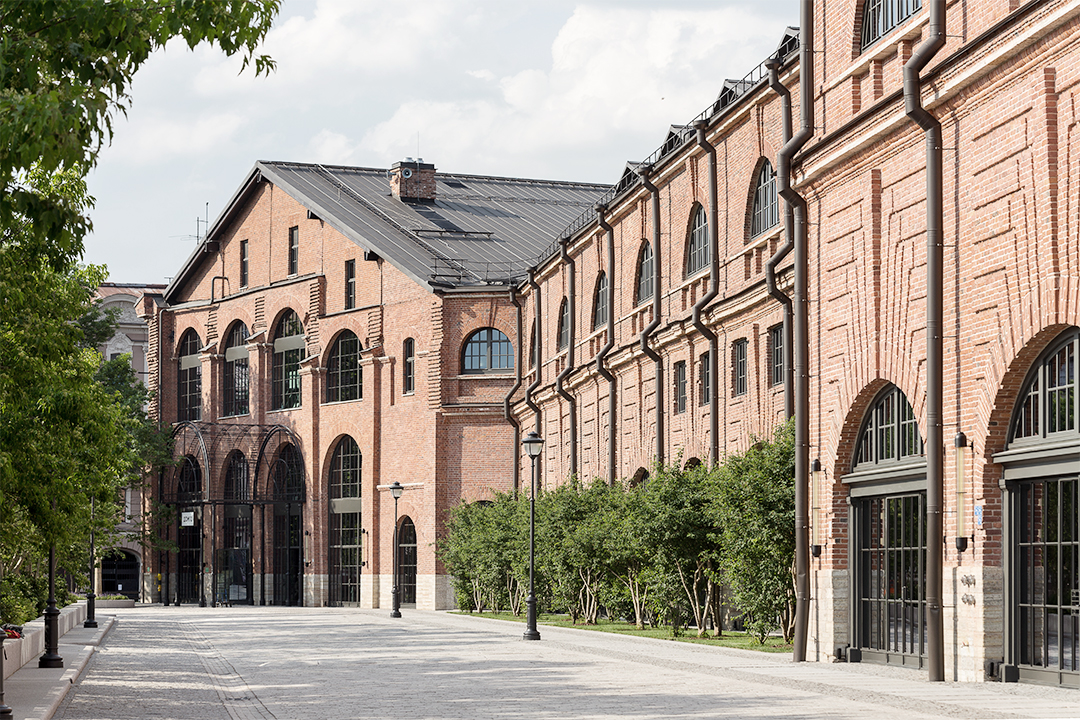 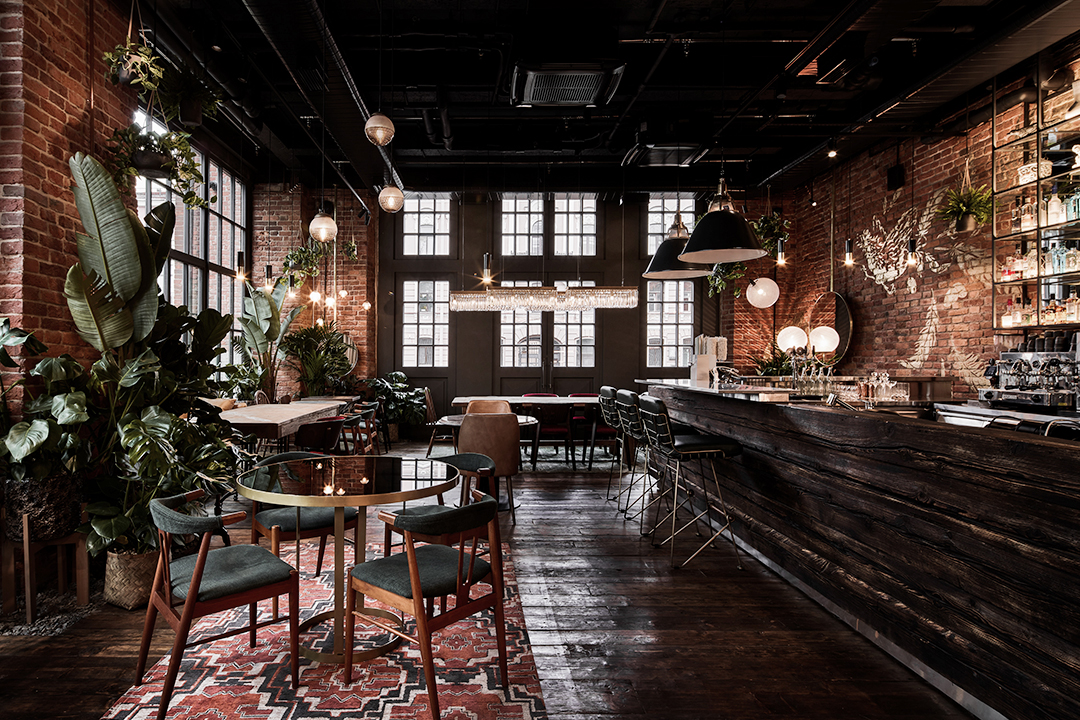 House 12 is mostly an art museum

House 12
House 12 was the fourth building to be restored in Novaya Gollandiya. It is made up of two buildings: 12a, which overlooks Truda Square and Admiralteysky Canal, and Building 12, which stands along the Kryukov Canal. The same technology was used for the restoration of House 12 as for the Foundry, the Commandant’s House and Bottle House. Some 400,000 red bricks were used for the façades, interior walls and vaults. As the eco-friendly island, a fully mechanized parking system has been installed exclusive for residents, in line with its ‘car-free’ approach.
House 12 is now home to Garage Museum of Contemporary Art, Tsifergauz Gazprom Neft and Cococo bistro. 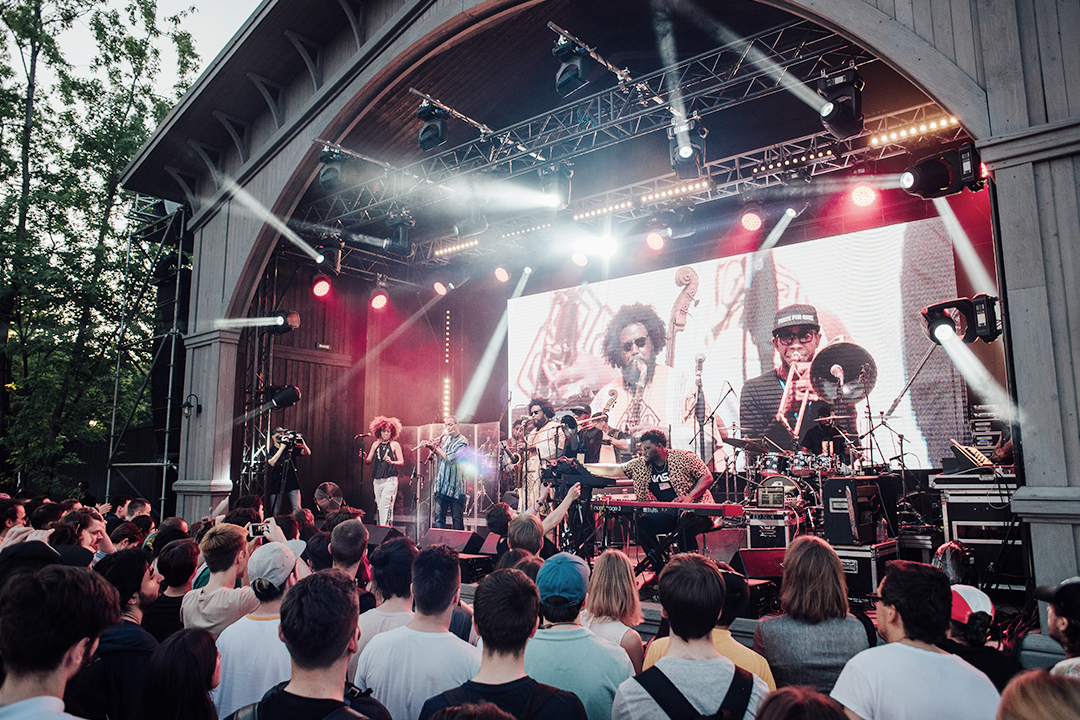 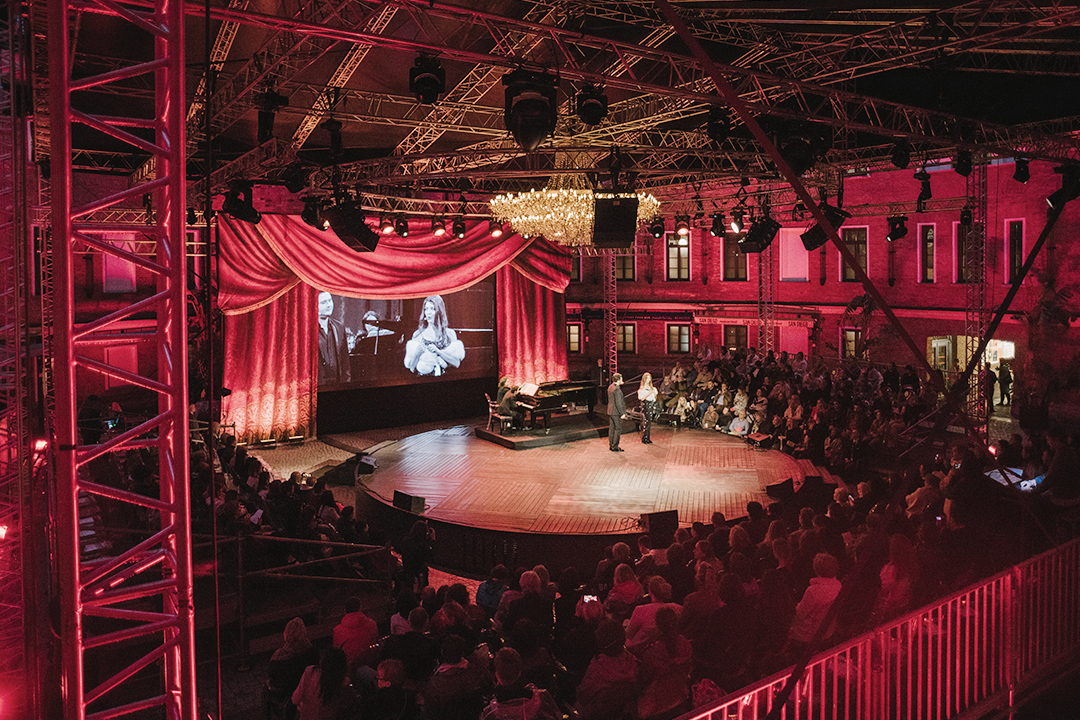 The area surrounding the Pavilion hosts a series of concerts and lectures.

Park and Pavilion
Just what can you do at the park, you ask? In the winter, DJs from NHI.FM radio station will take up residence and play music for skaters. There are shows with different themes for different time slots, covering film scores, classical symphony, Russian pop and others. You can skate while listening to a wide range of music.
The Pavilion hosts cultural lectures. You can also enjoy pop concerts or classical recitals on the outdoor stage. Art films will be screened and plays will be performed, too. Kids can go have fun at the Frigate Playground, outdoor table tennis court, basketball court, chess club or petanque courts. 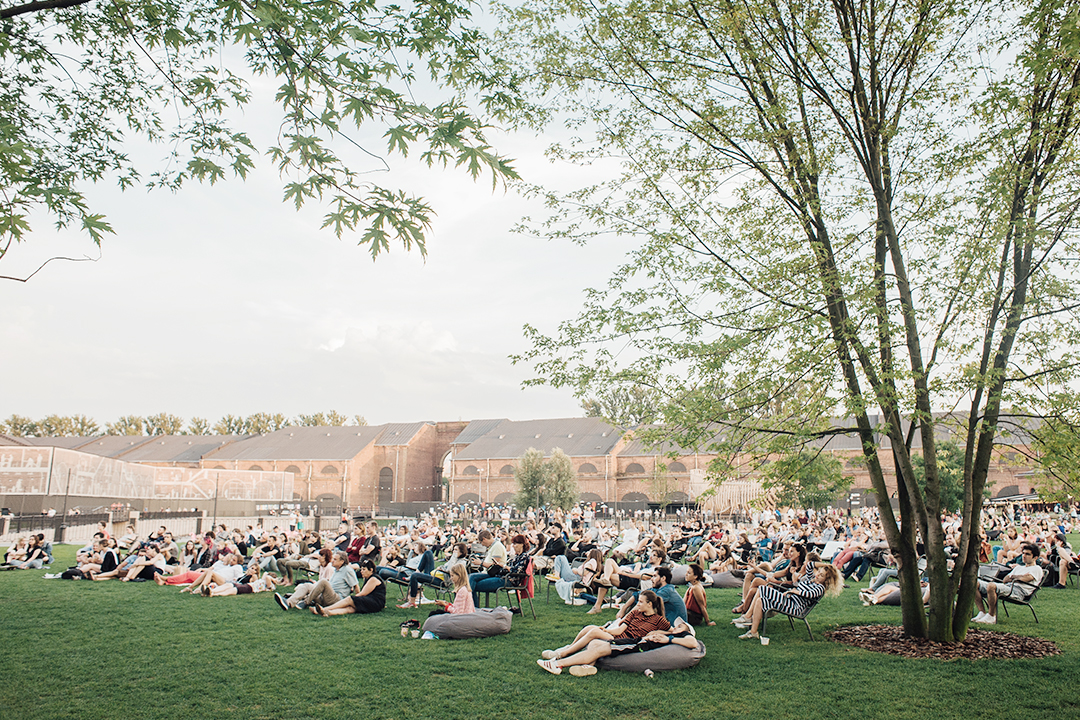 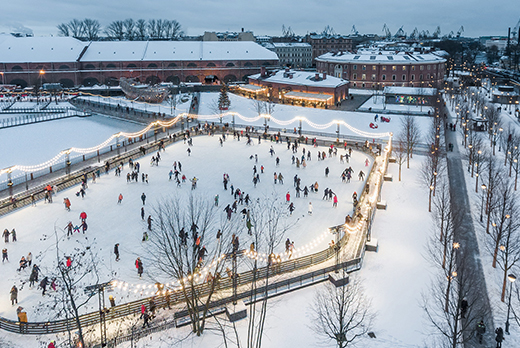 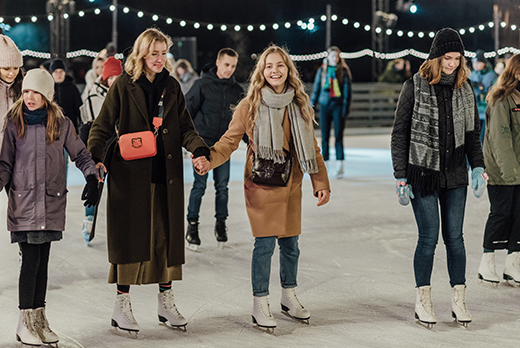 Be sure to rent an audio guide when visiting Novaya Gollandiya. You can hear all about the island’s history, architectural features, its current state and upcoming changes. You can pick it up at the information center, and the guide is available in Russian and English.
Novaya Gollandiya isn’t just a popular spot during White Nights. Even in cold winter months, it’s a beloved cultural destination for St. Petersburg residents. The island is the manifestation of Peter the Great’s grand plans for Westernization. You can feel that by looking at local residents who take nice strolls around Novaya Gollandiya and enjoy cultural offerings there. 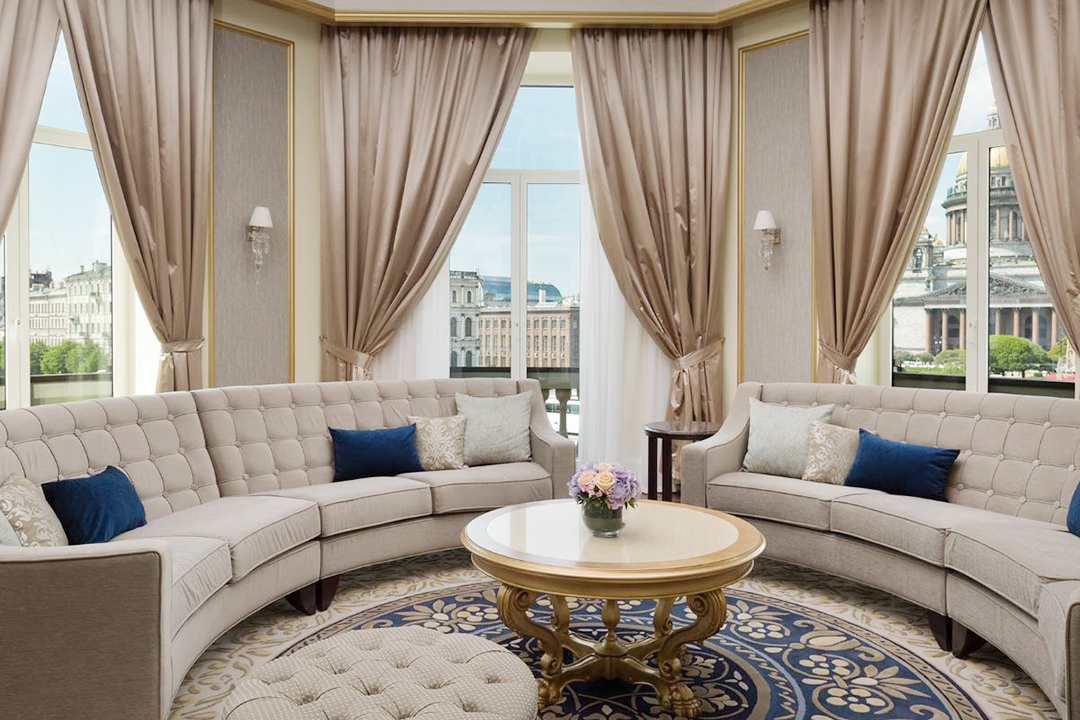 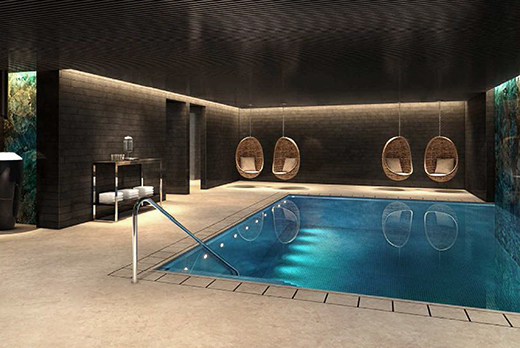 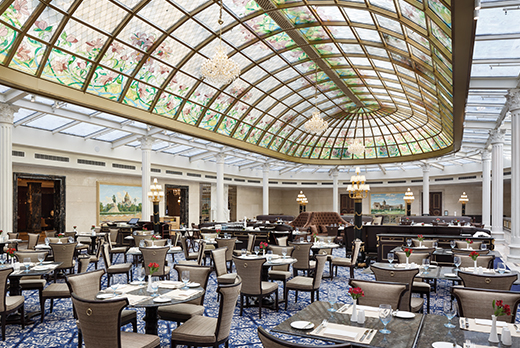 Where to Stay in St. Petersburg: LOTTE HOTEL ST. PETERSBURG
LOTTE HOTEL ST. PETERSBURG stands right across St. Isaac's Square, the most famous landmark in the city. The hotel is housed in a building that was first erected in 1851 and has since been remodeled. It's adjacent to the Nevsky Prsopect, the State Hermitage Museum and Mariinsky Theatre. Standing six stories high with one underground floor, the hotel has 10 different types of rooms for a total of 150, and also offers a wide variety of restaurants and facilities.