Walking Into Fairy Tale Town, Sapa of Vietnam
Sapa is a mountain village located between the northern tip of Vietnam and its border with China. By visiting a minority group in Sapa maintaining a traditional way of life, you can better understand how they coexist with nature. Also near the village stands the tallest mountain in Vietnam. Mount Phan Xi Pang, nicknamed as ‘the Roof of Indochina,’ rises over 3,000m above sea level. Sapa offers a perfect environment for a walking trip as its trails deliver picturesque mountain landscapes.
Traveling 350km northwest of the Vietnamese capital of Hanoi, you will find yourself in a surreal location surrounded by a staggering mountain range marked with meandering trails. Called a mecca for hikers, Sapa can be reached deep in the mountains and has a unique ambience different from the other tourist destinations in Vietnam. It sits in the coldest region in the country, with the highest temperature staying below 26℃ in summer. During winter months, it is recommended to wear arctic clothes to keep warm as the temperature changes drastically. Sapa is humid year-round and often covered in fog. A mystical image of Sapa is established through the combination of lush forests in the overbearing mountain range, white fog enwrapping the ancient village, and the ethnic village folks clad in colorful garments. 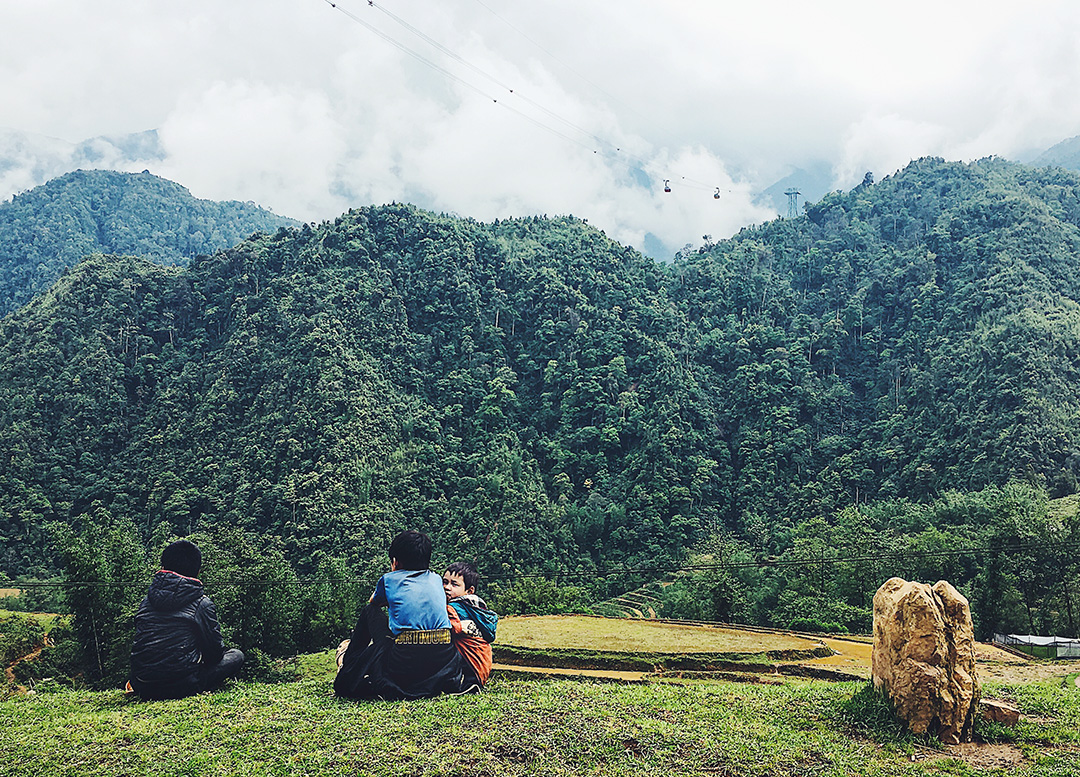 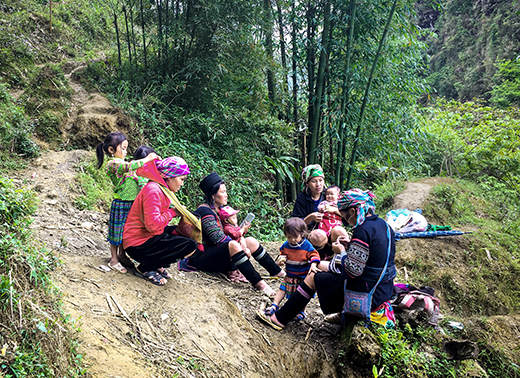 Sapa is home to several ethnic minorities, such as H’mong, Dao, Tay and Hoa. © Jeon Haein 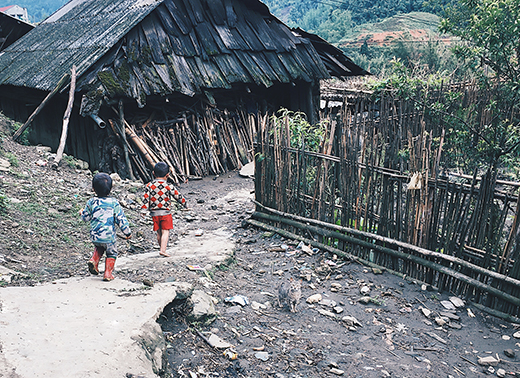 Cat Cat Village Trekking
The most popular trekking course in Sapa involves Cat Cat Village of H'mong People. Located only about 3km away from downtown Sapa, Cat Cat is an easy choice for hikers from around the world and is considered to be a gateway to Sapa trekking.
As you walk slowly along the Cat Cat trail crossing terraced rice paddy fields, you can get a glimpse of the daily life of the Black H’mong that have kept their traditional culture and style of living. Farmers wearing the conical hat known as ‘non la’ working in the fields, children playing with dirt against the backdrop of layers of mountains, and colorfully-dressed women making handcrafted goods in small groups captivate travelers. The village presents pastoral and peaceful scenes as if they were taken from a children’s storybook. The vast and open view, crisp air, and generous and kind smiles of the locals can clear the minds of strangers who are merely stopping by. 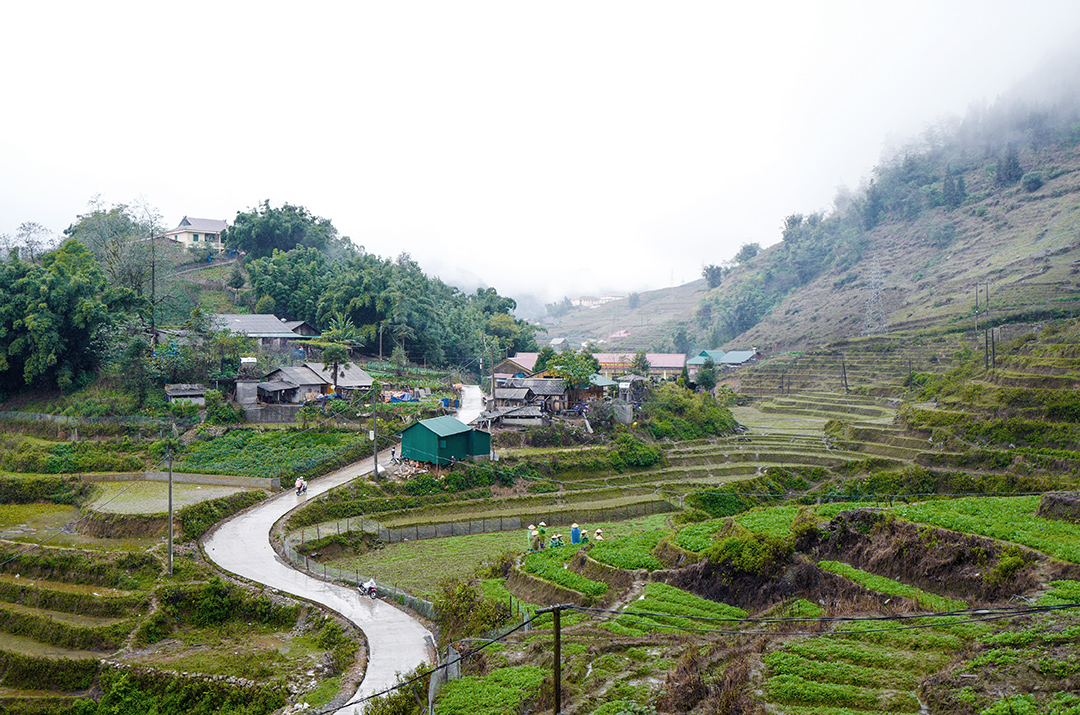 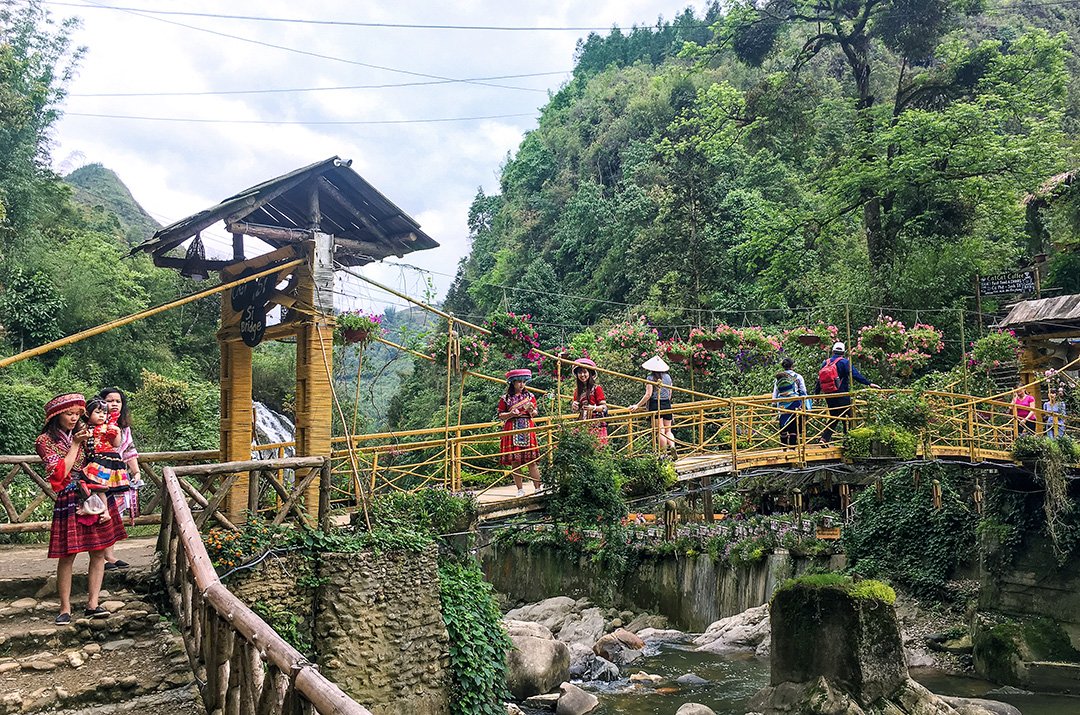 One of the most iconic features of Cat Cat Village is the water power plant using bamboo water wheels. The giant devices, built by the French during the colonial era, use the speed of the water flowing in the valley to generate electricity. Back in the old days, they played an important role in getting electric power in the isolated mountain village. Although they are no longer needed today, they have been preserved for their historic symbolism. The rhythmic movement of the wooden structures create a strange feeling of security. Their appearance is also closer to a ride in an ancient amusement park than to a ‘power plant,’ offering a moment of childlike innocence to the spectators. 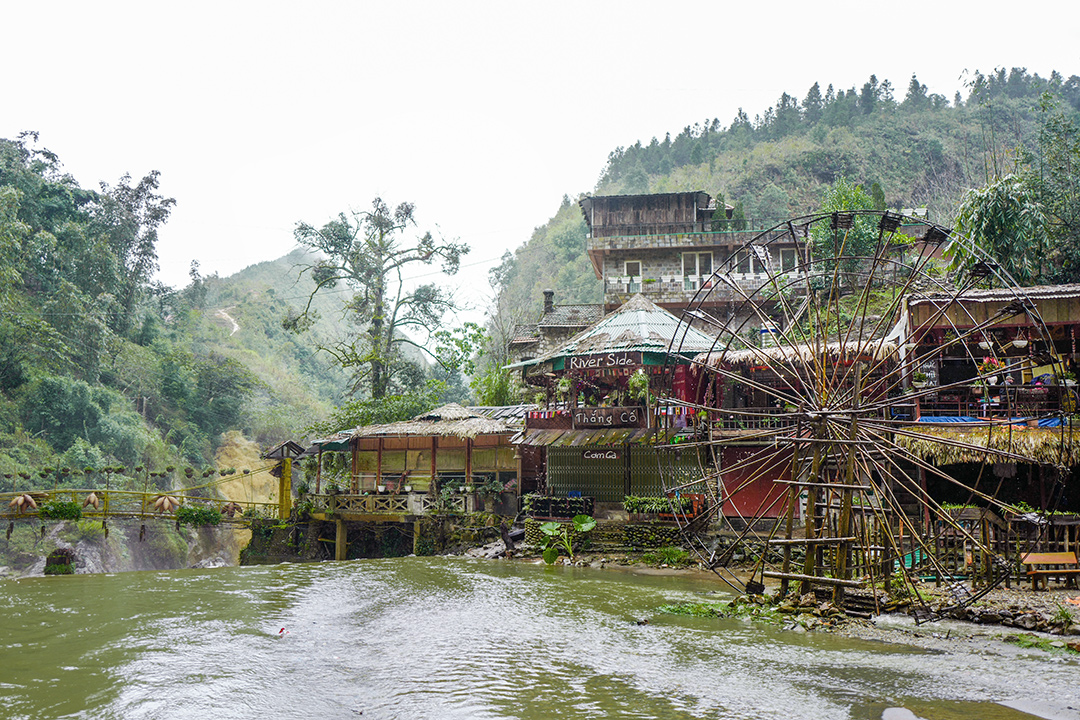 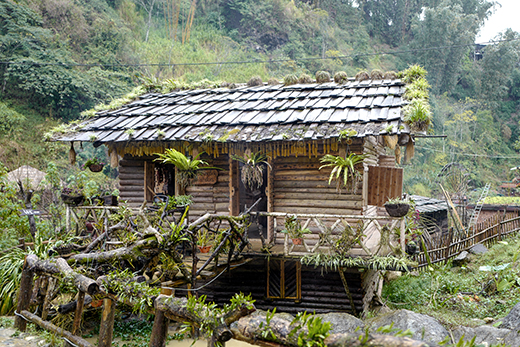 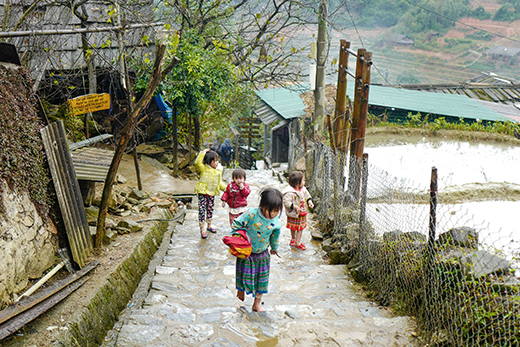 Roof of Indochina, Phan Xi Pang
If there is Jungfrau in Europe, there is Phan XI Pang in Asia. Located in the heart of Hoang Lien Son mountain range, Phan Xi Pang is a mountain that stands 3,147m tall. Not just in Vietnam, but in an area combining Laos and Cambodia as well, it is the highest peak and is aptly called ‘the Roof of Indochina.’
It takes several days to hike up the mountain on foot due to the rugged terrains. Today there are the Funicular Railways and the Fansipan Cable Cars giving rides to tourists who want to reach the summit. In order to get to the cable car station, you need to take the funicular from Sun Plaza Sapa Station in Sapa Town. The funicular carriage ride overlooking the terraced rice paddy fields down below is one of the amusements you can have at the start of your Phan Xi Pang trip. Once you get to the cable car station, it is now time to experience the cable car ride, crossing 6.2km in the air to the top of Phan Xi Pang. It is also known for the largest ascent by a three-rope cable car, rising 1,410m throughout its journey. The panoramic landscape seen from the cable car is sublime and does not fall behind the world’s top tourist spots. 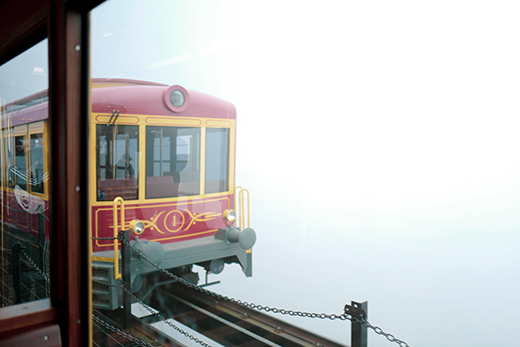 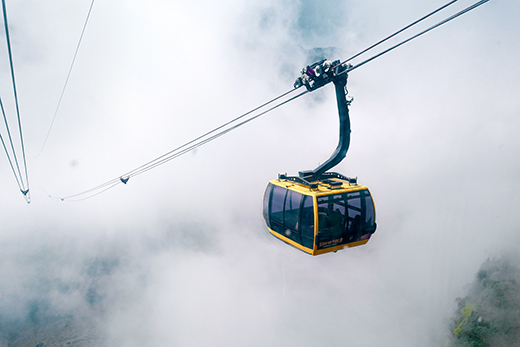 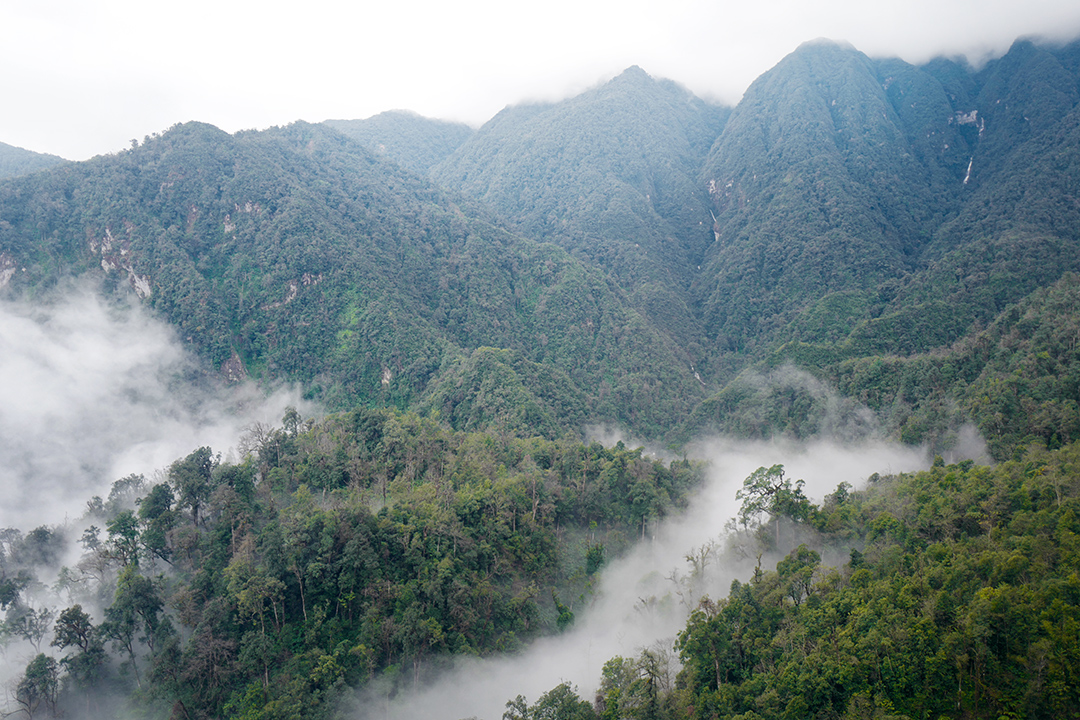 The view from a cable car © Jeon Haein

It is such an amazing experience to rise above the thick layer of white fog and be high enough to look down on the mountain tops decorated with patches of clouds below your feet. You have to experience it to truly understand the splendor. It is as if you leave all earthly concerns behind to head to the celestial world. When you get off the cable car, you take 600 stairs to reach your destination, the summit of Phan Xi Pang. 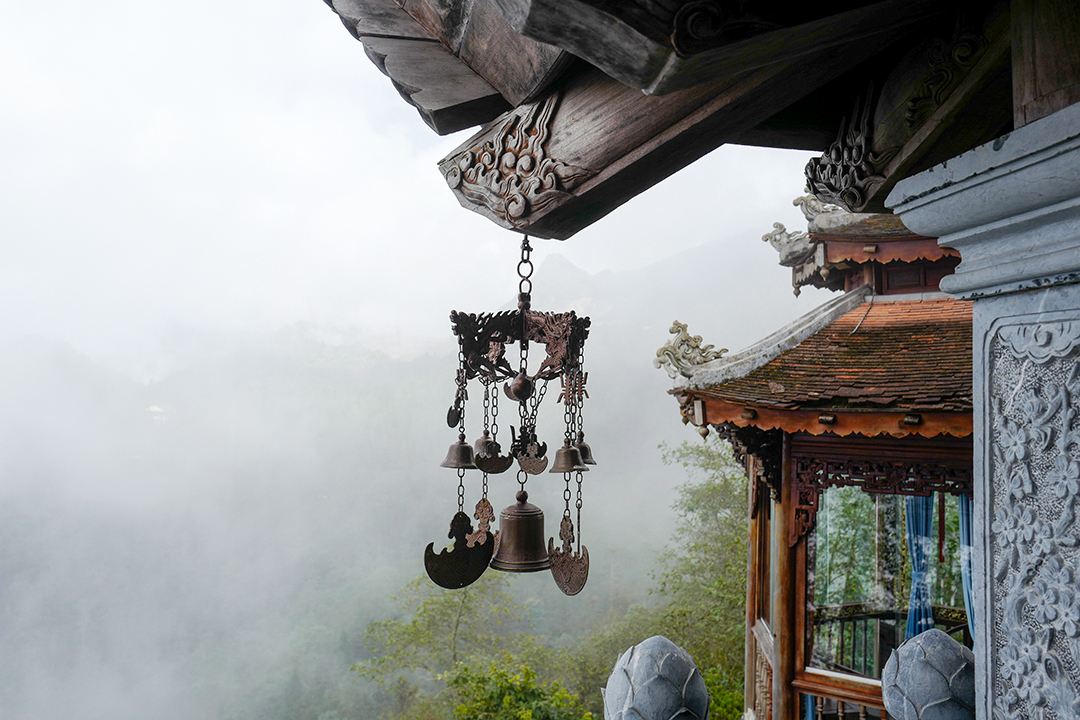 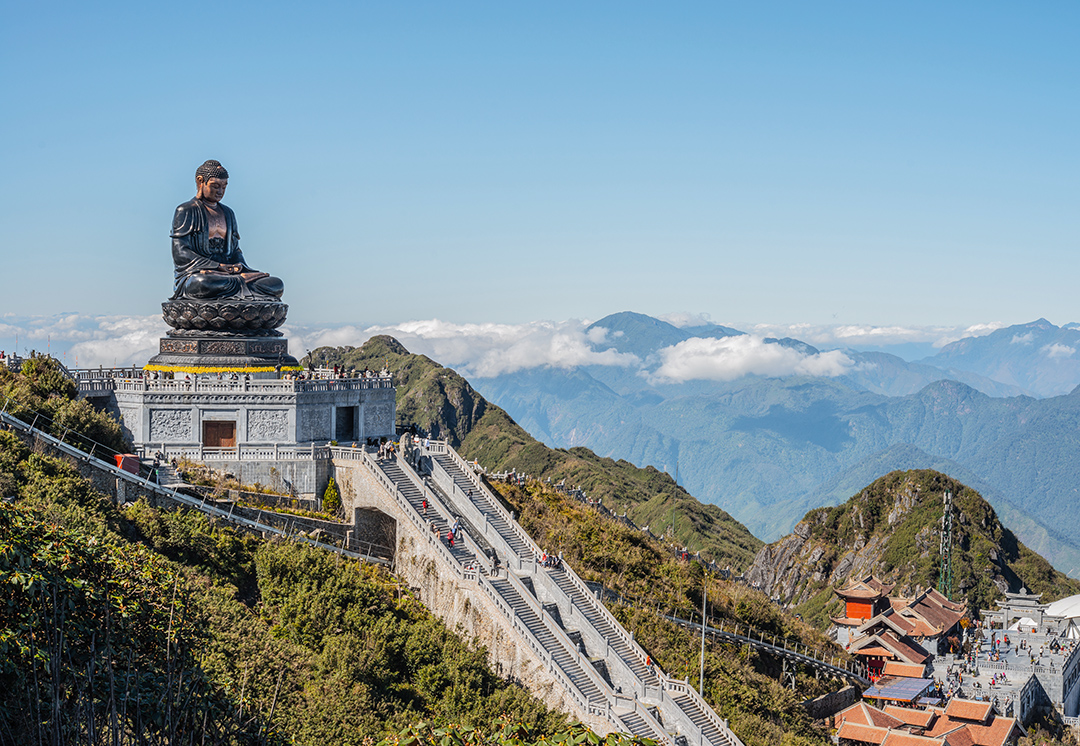 Kim Son Bao Thang Pagoda at the top of Phan Xi Pang. It was built in the style of the Tran dynasty. © Shutterstock

Being an alpine zone, the summit has fast-changing weather conditions. When it is cloudy and foggy, strong mountain winds tend to blur your sight. There is a tongue-in-cheek saying that goes, “You need virtuous deeds by three generations to see the clear sky atop Mount Phan Xi Pang.” Even if you get to see clouds and fog, going up to the peak of Phan Xi Pang is definitely worth experiencing once in your life. 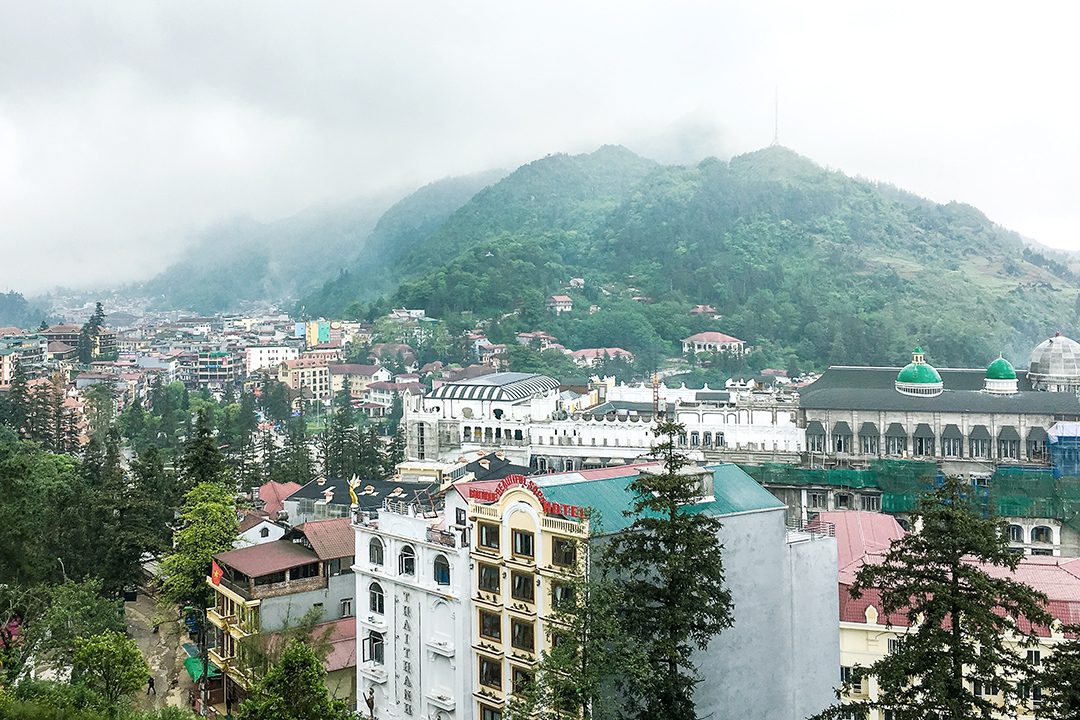 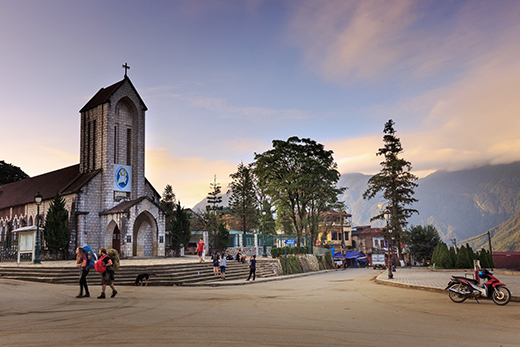 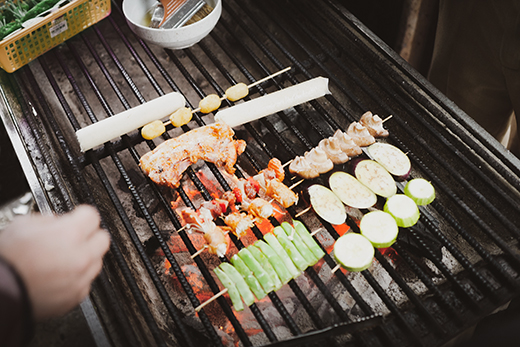 Exploring Sapa Town on Foot
Sapa town, serving as a base camp for Sapa trekking, offers a large variety of attractions. The plaza in the center of the town plays the role of a meeting venue between the locals and visitors. It is where a market selling handicraft made by ethnic minorities is set up and traditional performances are held on special occasions. Behind the plaza stands Notre Dame Cathedral Sapa built in 1935. It may appear humble but, up close, reveals similarities to the architectural style of old castles in Europe. Its long, splendid interior elicits piety. By the time you get hungry from all the walking, you will likely be drawn to a street vendor selling skewered food with an irresistible smell. Skewered food is the signature food of Sapa. Ranging from skewered veggies, meat, seafood, and even frogs, a Vietnam delicacy, the freshly-cooked food on a skewer coupled with a cold Vietnamese beer can wipe your fatigue away. Try dipping your feet in the art of slowness as you leisurely stroll around Sapa Lake. The sky of Sapa reflected on the surface of the lake will be carved into your heart with the same kind of ripples that the lake has. 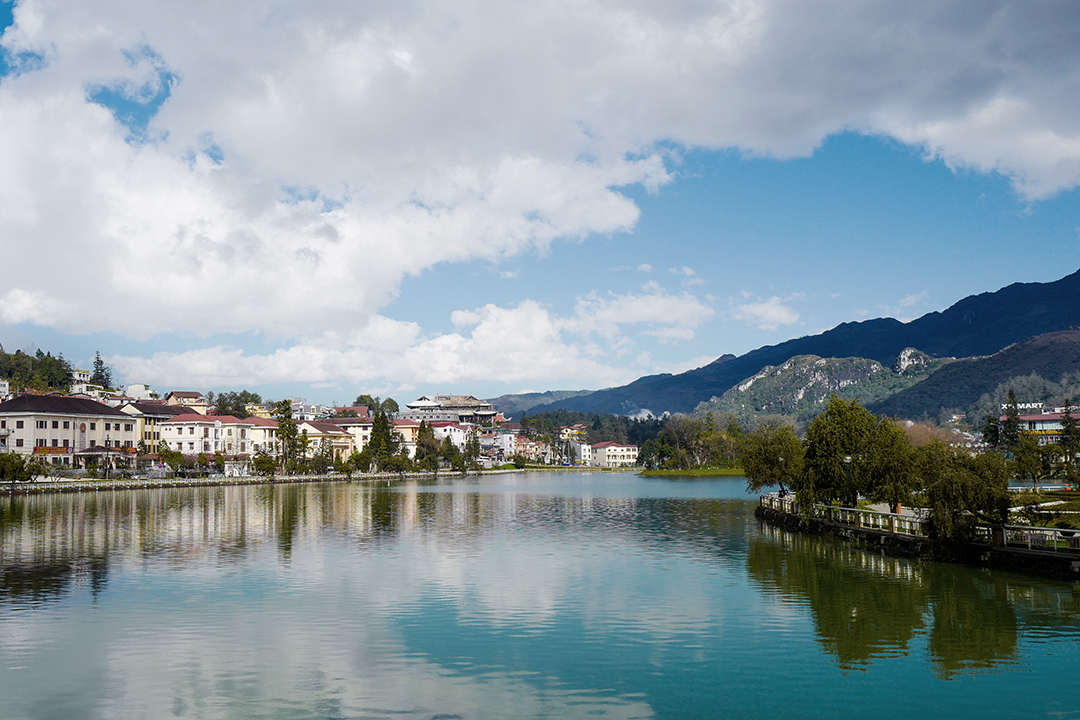 Where to Stay in Hanoi: LOTTE HOTEL HANOI
LOTTE HOTEL HANOI is located in the upper part of Lotte Center Hanoi, a new landmark in the Vietnamese capital. A total of 318 rooms and suites present interior designs inspired by Vietnam’s traditional patterns while overlooking the entire city. The hotel is famous for its dining options which includes a restaurant specializing in local specialty foods made with the freshest ingredients from around the world. The Rooftop Bar offers a view of the Hanoi skyline. 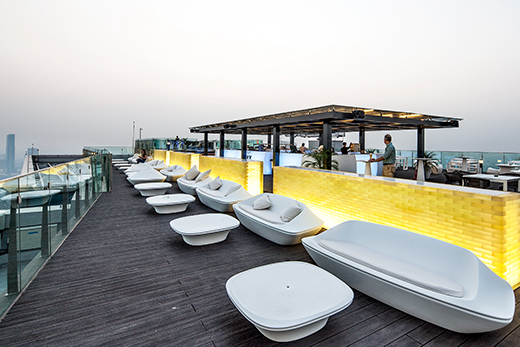 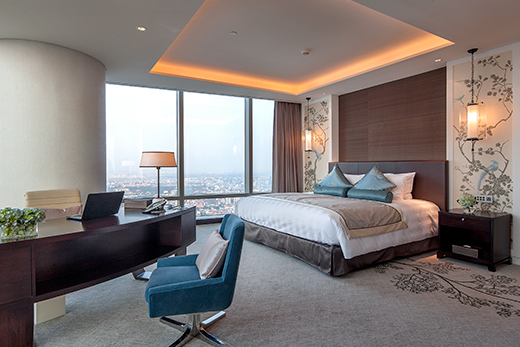