A Rhythm Awakens Spring, Seattle Fly Fishing
The global pandemic has inadvertently given a chance for people to find new pastime activities. In the United States, more and more people are joining fly fishing. In the vast continent, it is easy to find an uncontaminated fishing spot in nature only if you want to. The state of Washington, in particular, offers many optimal fly-fishing destinations that are gaining popularity.
If you google ‘Seattle,’ the description of the city starts with this sentence: “Seattle, a city on Puget Sound in the Pacific Northwest, is surrounded by water, mountains and evergreen forests, and contains thousands of acres of parkland.” Puget Sound is a gigantic maze of waterways formed between the mainland and surrounding islands and peninsulas. The confluence of fresh and sea water has established a fantastic natural fishing ground. One of the popular game fish in this area is coastal cutthroat trout, found year-round. A mere 30-minute drive from downtown Seattle is all you need to get to a location where you can catch a lively big fish. That’s not all. If you drive 2.5 hours from Seattle, you can find wild rainbow trout swimming in the Yakima River, a blue ribbon fishery certified by the government for its superior water quality, anytime of the year. 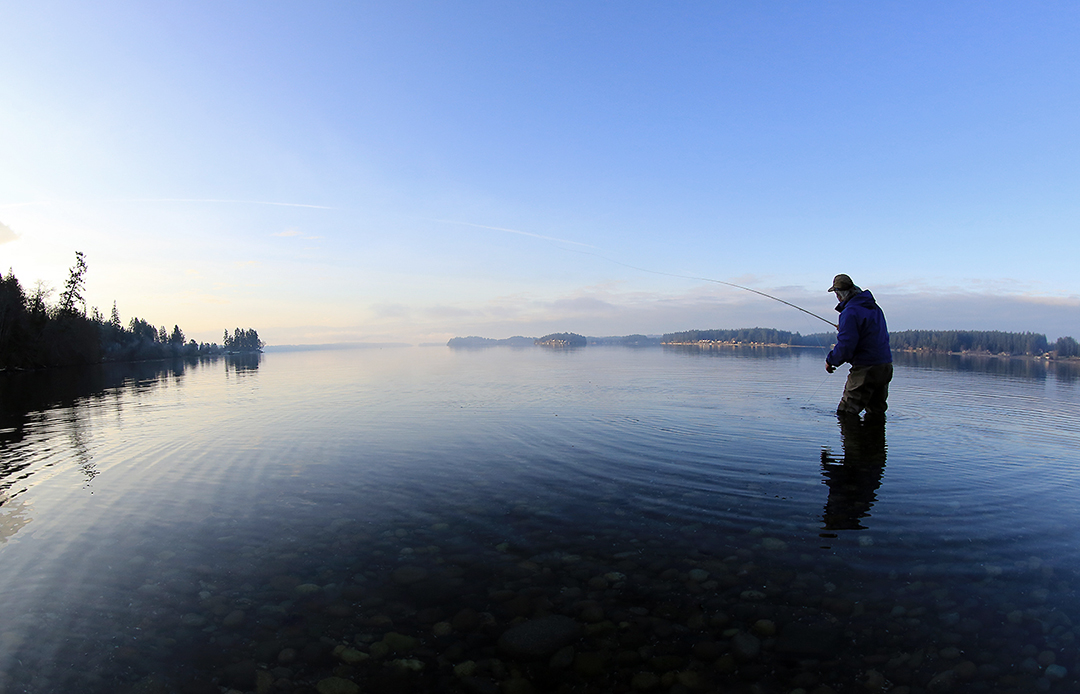 Fly Fishing Begins with Casting
Unless you are an enthusiast, ‘fly fishing’ will likely only remind you of the film <A River Runs Through It> (1992). In the movie, a Presbyterian priest in Montana enjoys fly fishing with his two sons. He is strict but has a literary sensibility. The Blackfoot River pierces through the life of the priest’s family, just like the film title. One of the memorable scenes is where the father teaches his young sons how to cast a fly rod. He emphasizes a ‘four-count rhythm’ between 10 and 2 o’clock. It shows that casting is an important step in fly fishing.
As important as casting is a fly at the end of the fishing rod. After planning where to fish and which species you’d like to catch, it is essential to learn about the insects or small fish that your target fish likes to feed on. Experienced anglers are skilled at making artificial flies by using various materials. It’s a combination of entomology and craft. There is no need to panic from the beginning. Fly fishing is a field that requires a level of expertise and knowledge and, as such, there are many experienced anglers sharing their experience and know-hows online. In addition, you can easily find a fishing equipment shop or a tour agency with fishing guides on standby, providing detailed information to beginners. 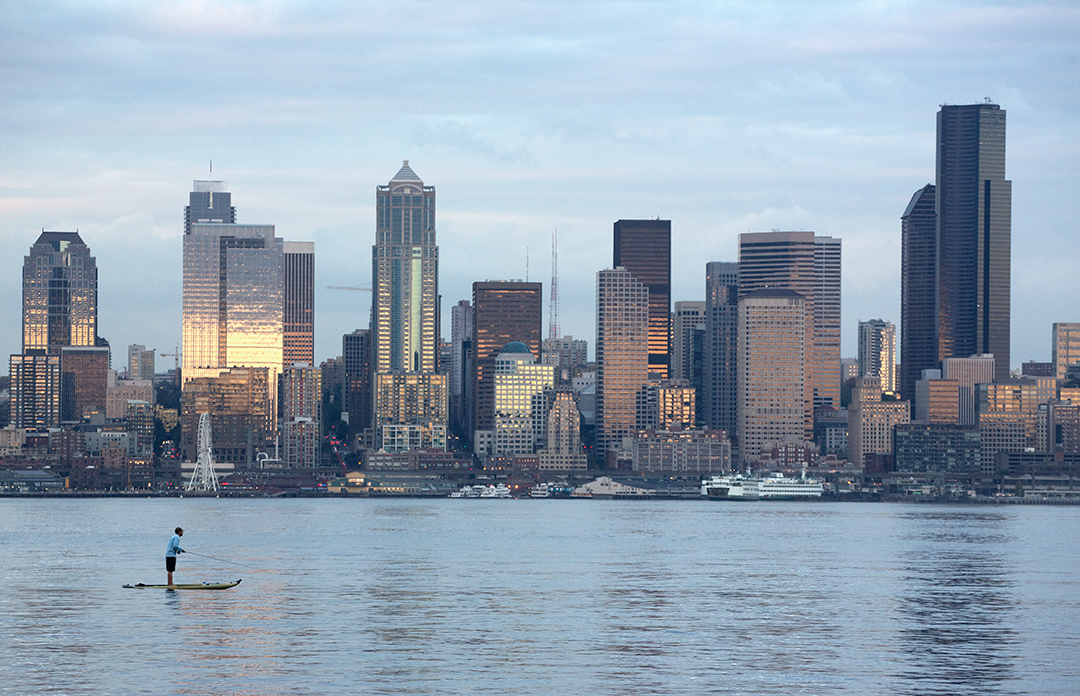 Downtown Seattle can be seen behind the angler. © Courtesy of Emerald Water Anglers/ Dave McCoy Photography

Dave McCoy is an iconic figure in the fly fishing scene and an ambassador for the American Museum of Fly Fishing, high-end handmade fly rod brand Thomas & Thomas, and the fly fishing line of outdoor clothing brand Patagonia. As a professional photographer with over 40 years of fly fishing and related work experience, he currently runs Emerald Water Anglers, offering fly fishing courses and guided tours based in the Seattle area.
“Fly fishing in the Pacific Northeast, particularly near Seattle, can be challenging. The area is surrounded by massive bodies of water but you need different approaches and conditions depending on the fishing area you choose,” McCoy explains. 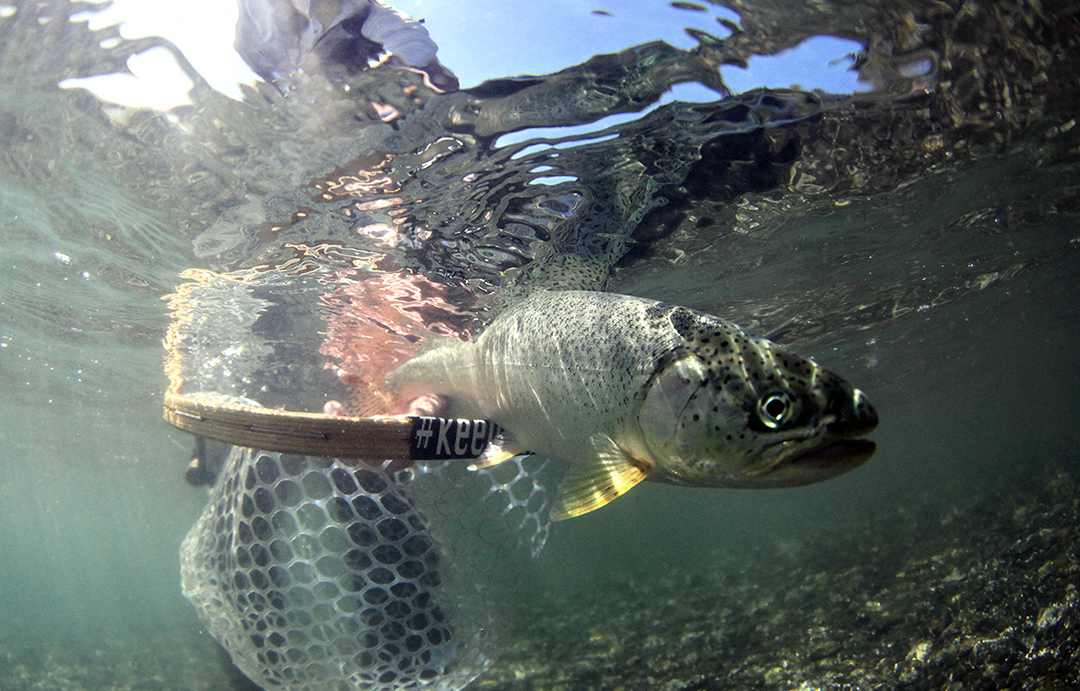 Cutthroat Trout Haven, Puget Sound
In Puget Sound, where a great number of fisheries are located, fly anglers should make an effort to figure out landscape variables, tidal changes, and wind conditions of the designated fishing spot. Despite the amount of research required each time, Puget Sound is an attractive fishing ground because of the fact that you don’t have to be on a boat to catch saltwater fish. The shorelines around the sound add up to 3,790km, forming a haven for sea-run cutthroat trout and rainbow trout all year long. The month of February is a peak season for winter rainbow trout fishing. In addition, juvenile Chinook salmon crowd the coastal waters throughout the year, with the prime time for anglers falling between December and April. 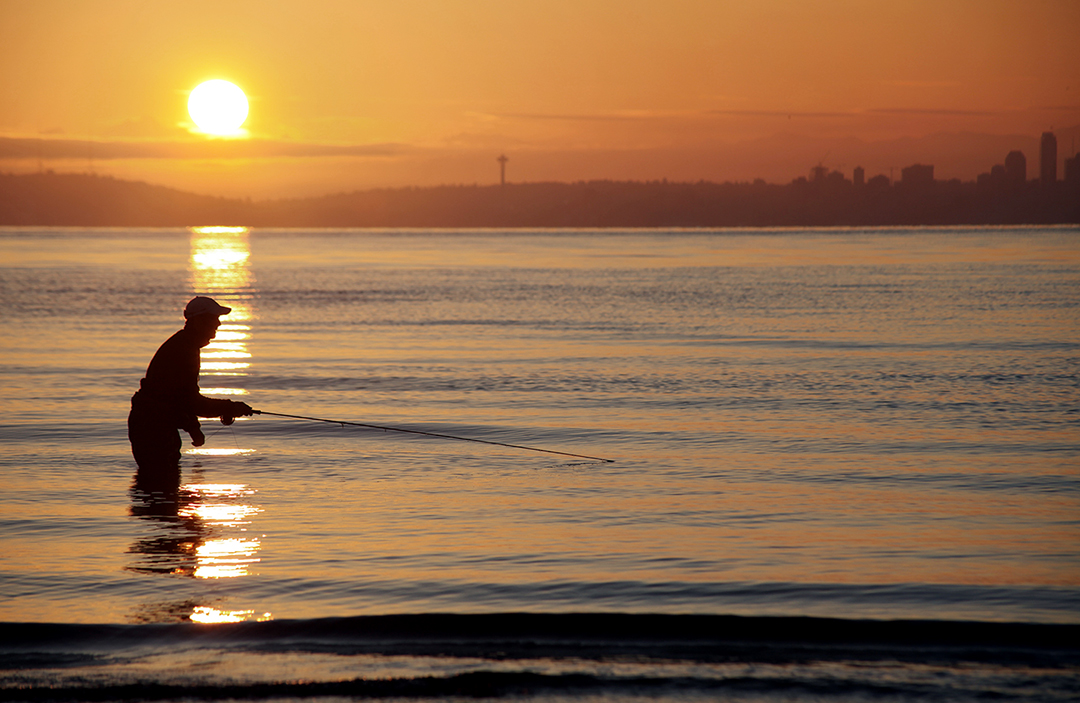 As anglers immerse themselves in fishing, the sun sets over Puget Sound. © Courtesy of Emerald Water Anglers/ Dave McCoy Photography

According to Visit Seattle, Lake Washington located between Seattle and Bellevue is a great fishing spot to catch rainbow trout and cutthroat trout. Particularly in summer, you can aim for sockeye salmon as well. Elliott Bay in the Central Basin region of Puget Sound is popular for Chinook salmon in summer but you should check if it’s open for fishing before your visit as the overcrowdedness often results in bay closure. Browns Point in the south is where Chinook and silver salmon pass on their migration route toward the Puyallup River where they spawn. The Tacoma Narrows is a good location to catch salmon and lingcod due to the abundance of bait fish pushed to the area by the tides. There are a variety of salmon species including humpies and silver salmon, as well as rockfish, halibut, flounder, and green sturgeon, in Puget Sound. 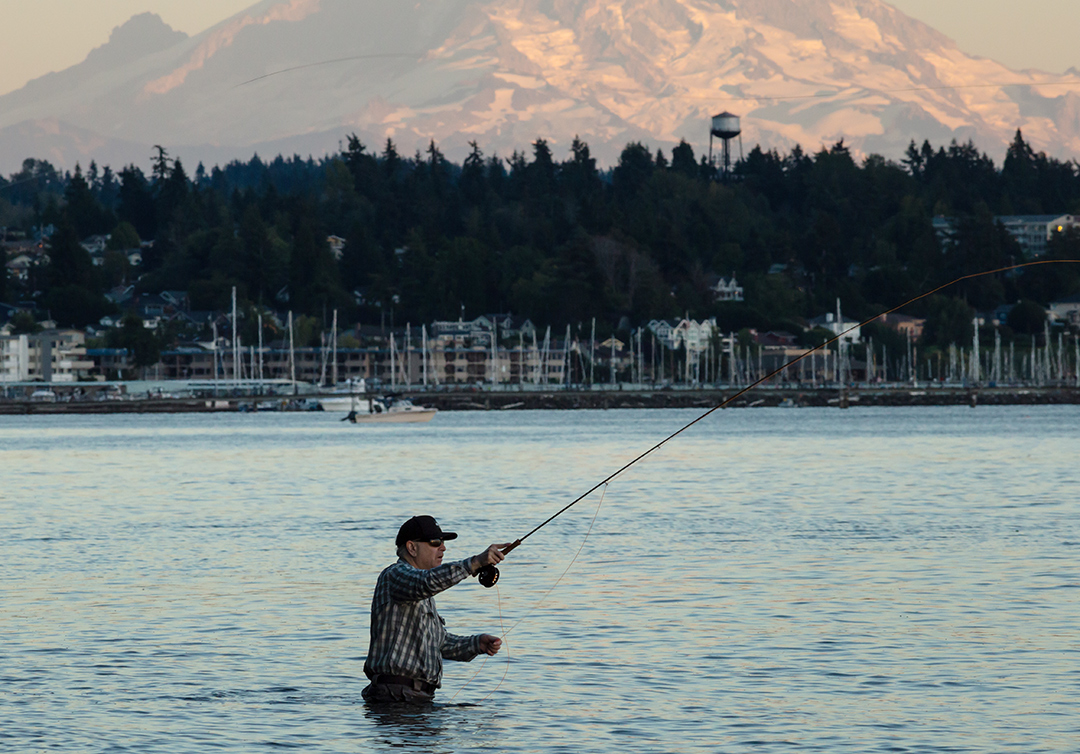 Mt. Rainier in the distance © Shutterstock

“Fly fishing requires a complete understanding of the life of fish.” 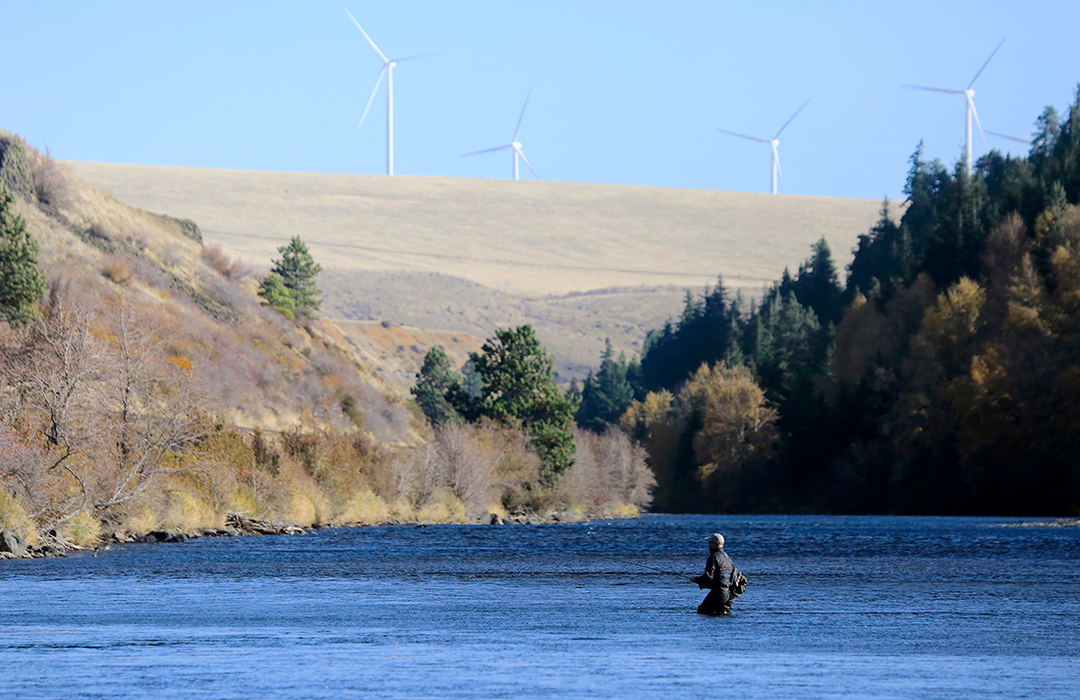 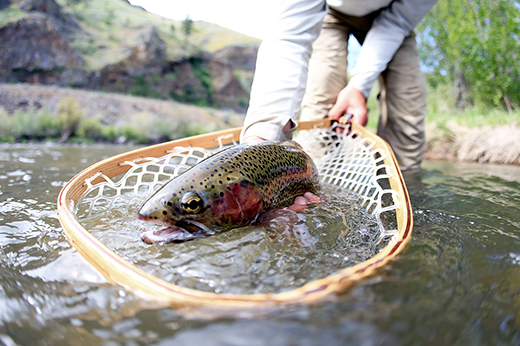 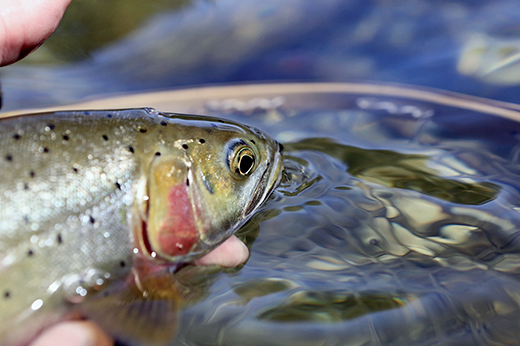 Yakima River Overflowing with Rainbow Trout
Known as the ‘Yak’ among the locals, the Yakima River is a must-see place if you dream of fly fishing in an ideal setting like in the movie . The picturesque river stretches 344km, the longest in the state of Washington. All kinds of salmon and trout can be found in every nook and cranny of the river. To anglers, it is a fascinating place. Fly fishing fans from around the world either put on waders and boots to walk into the shallow waters for fishing , like Brad Pitt in the movie, or ride a boat or a raft to enjoy ‘float style’ fishing.
The area is recommended for beginner anglers because the river provides an opportunity to experience tailwater fishing. Tailwater refers to waters located downstream of a dam. Thanks to rich nutrients, it forms a great feeding ground for fish, including trout. Myriads of insects start hatching there from February, which lasts through November. It means there is plenty of time to catch trout in the area. A master angler will try to go for a lesser-known spot for fishing, knowing big catches can be found in any part of the clean river. The Yakima River is also popular for the variety of fish species available across different zones and in each season. It presents a new expectation every time. 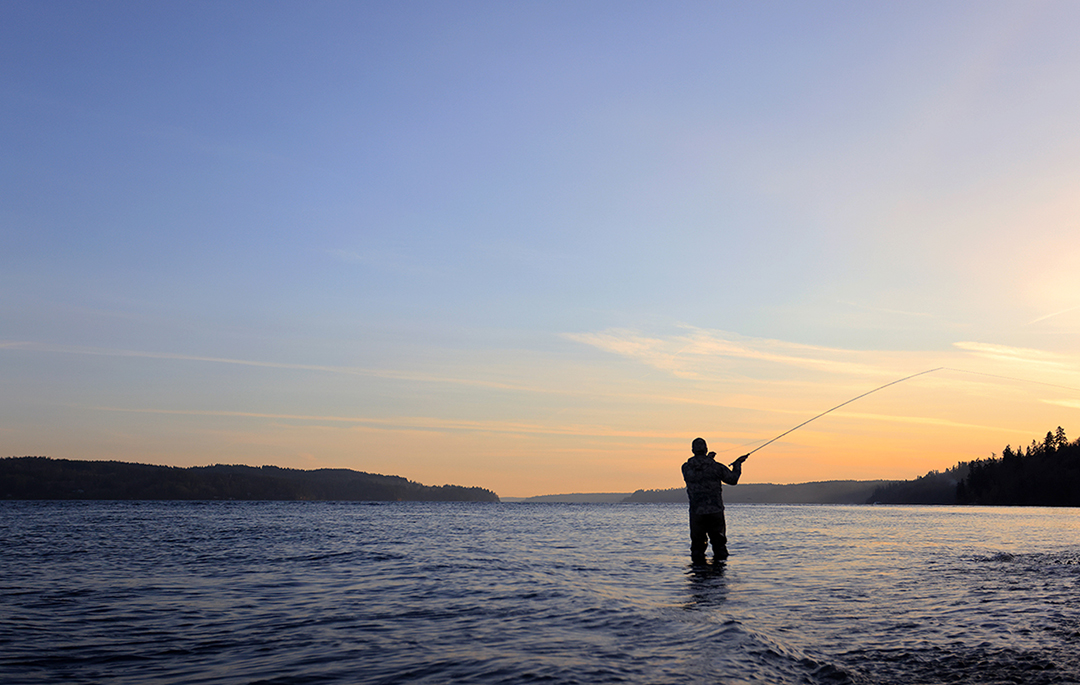 Once you get caught up in fly fishing, you will lose track of time. © Courtesy of Emerald Water Anglers/ Dave McCoy Photography

Art of Fly Fishing
“Fly fishing requires a complete understanding of the life of fish.”
Dave McCoy of Emerald Water Anglers believes so. He began fly fishing at the age of three with his father. “Things like the temperature of the target fish habitat, where their preferred insects hatch, what those insects look like as they grow, how you will make an approach without alerting the fish, and how you will lure the fish with your bait.. Simply put, fly fishing is about making relationships with nature.”
According to McCoy, people get into fly fishing because it’s a combination of two things. Techniques improving with time and the ability to skillfully adapt oneself to the situation in hand. When these two factors are in perfect sync, fly fishing can be turned into art. Just like how depicts the father and the brother seeing ‘a work of art’ in the way Paul McClean(played by Brad Pitt) figures out his own rhythm in casting a fly road. 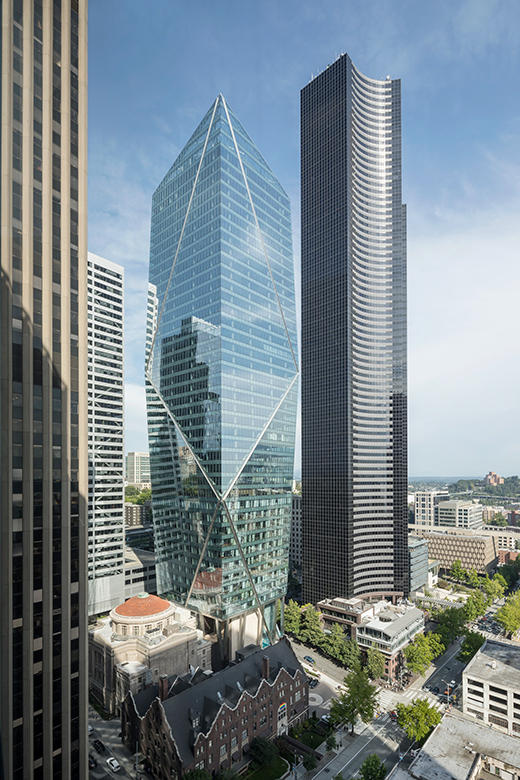 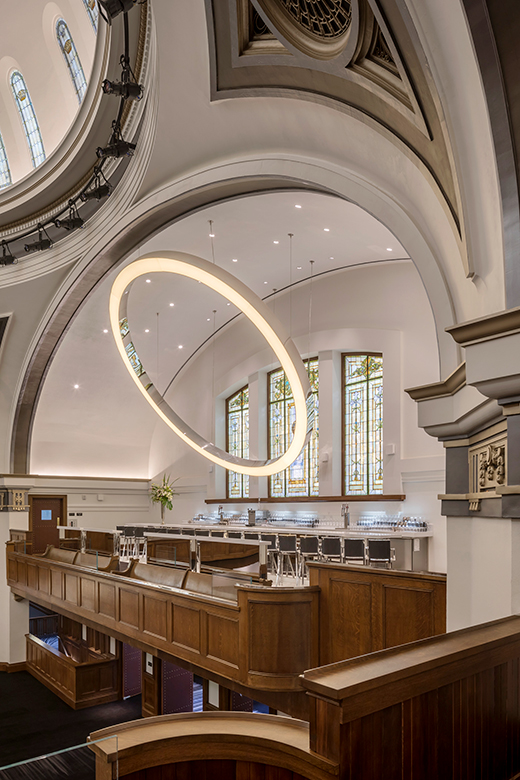 Where to Stay in Seattle: LOTTE HOTEL SEATTLE
LOTTE HOTEL SEATTLE opened in September 2020 in a 44-story highrise located on 5th Avenue in downtown Seattle. The building’s facade made entirely of glass panels brightens up the city’s landscape. The interior design of 189 rooms and suites in the creative, modern hotel are inspired by beautiful nature in and around the city. In the vicinity of the hotel are popular tourist spots including the Space Needle, Pioneer Square, and the Pike Place Market. LOTTE HOTEL SEATTLE, an emerging landmark in the city, presents an easy solution if you want to do both business and sightseeing during your stay in Seattle.