Golden Eagle Luxury Trains
On the Trans-Siberian Railway, connecting Vladivostok with Moscow, your dream for a grand journey from the Russian Far East to Europe will come true. Let us introduce you to a luxurious way to do that, with the sweet scent of wine, rather than the pungent smell of sweat, in the air.
The COVID-19 pandemic brought the entire world to a screeching halt in 2020. We were all locked behind our borders, masks and all. The news that vaccines have been developed couldn’t have come a day sooner. After spending an entire year in a lockdown, you may have begun to wonder when the world became connected for the first time. It was probably around the time of the Industrial Revolution. The steam engine led to the revolution, and locomotive trains and steam boats helped bring the world closer. 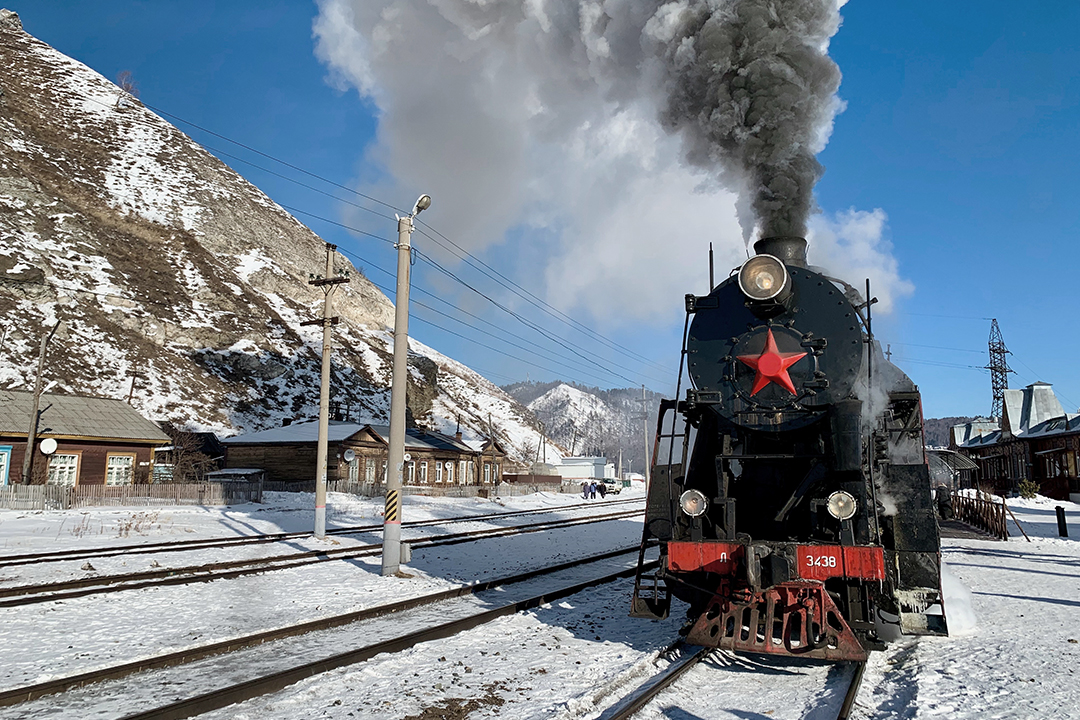 Since first seeing the light in 1804, steam locomotive trains have been continuously evolving. In October 1883, the Orient Express Train began its operation, and trains were no longer just means of transportation or freight. They now enabled luxurious travel. Cuisines and specialties from the trains’ destinations enriched train travel. Luxury journeys from Europe to Asia captured the world’s imagination with their indulgences. Once hailed as a ‘Dream Adventure,’ the Orient Express ceased operation in 1977. But we still have a modern version of our Dream Adventure. Golden Eagle Luxury Trains, covering the Trans-Siberian route, are still running. 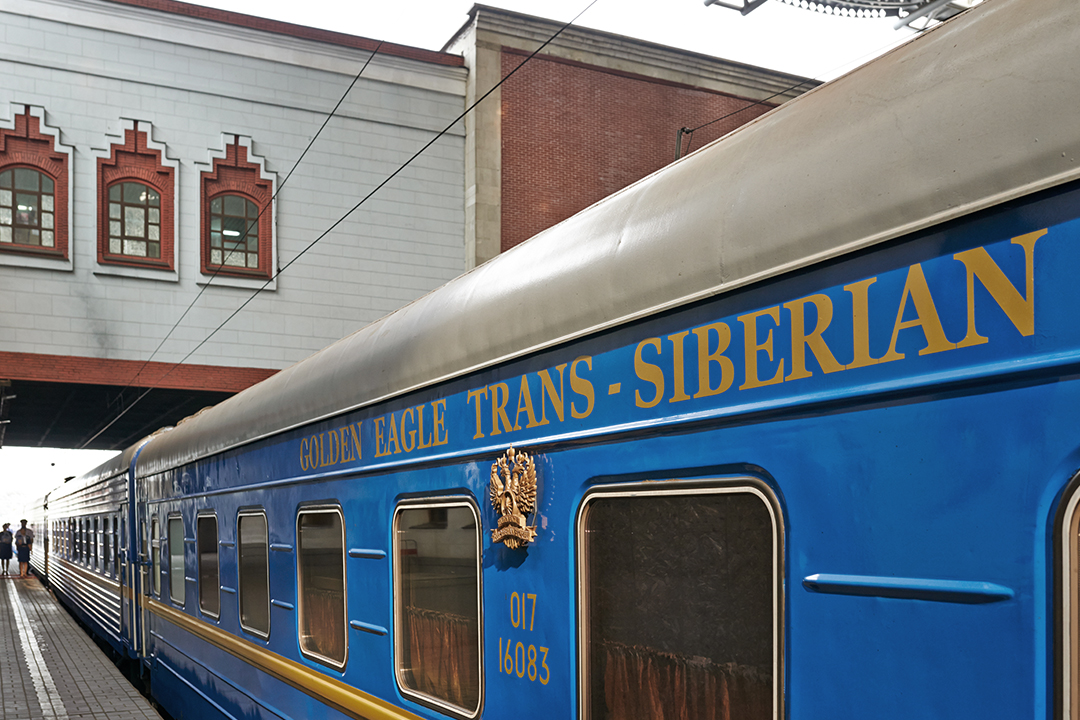 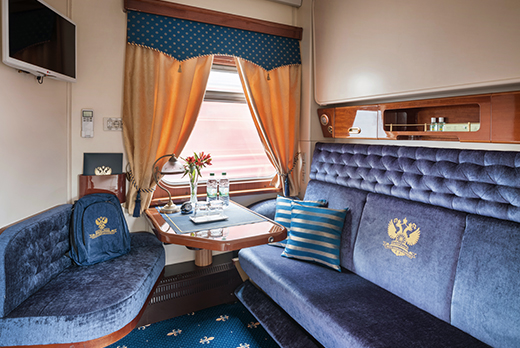 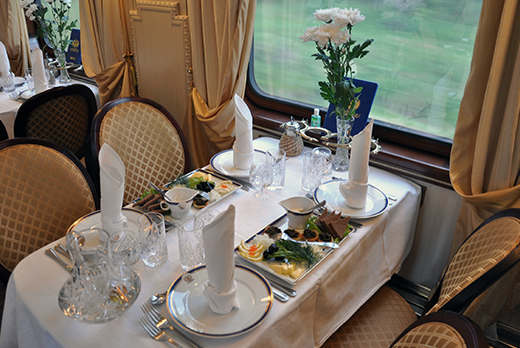 The posh exterior and the interior of Golden Eagle Luxury Train 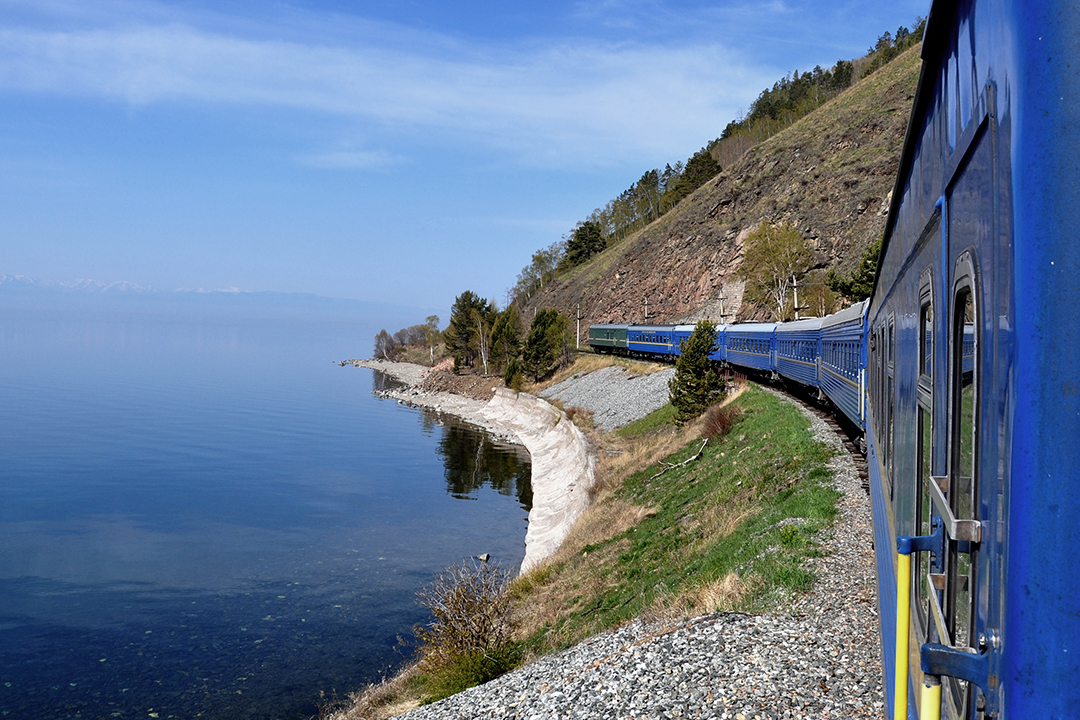 Trans-Russian Trains Operated by Briton
The world’s most significant luxury trains also travel on the Trans-Siberian Railway. Meet Golden Eagle Luxury Trains. Tim Littler, founder of Golden Eagle, hails from Britain. His family has been running a wine business since 1788. While working in the family business, Littler could never abandon his lifelong passion for rail travel. To wit: at age 16, Littler rented a locomotive train and carried 350 passengers from Manchester to Edinburgh.
In 1989, Littler took a serious crack at the rail travel business. His company was named ‘GW Travel Ltd,’ after the founder of the family wine business. When Russia opened its doors to foreigners in 1992, Littler started operating rail tours through the Caucasus and Crimea. Four years later, on May 25, 1996, Littler launched his first Trans-Siberian tour. The 13,000km-route, connecting Berlin to Vladivostok, had 72 steam engine trains. There were complicated paper works and logistical hurdles at every transfer point. Despite these obstacles, Littler’s inaugural Trans-Siberian tour was only 10 minutes behind schedule. In 2000, Littler pushed himself even harder, going from St. Petersburg on the western end of Russia, cutting through Baikal-Amur Mainline in central Siberia, and ending up in Vladivostok. The train then went north toward Sakhalin, crossed Siberia the other way, and passed Lake Baikal and Irkutsk before arriving in Moscow. The 42-day journey covered 25,630km. 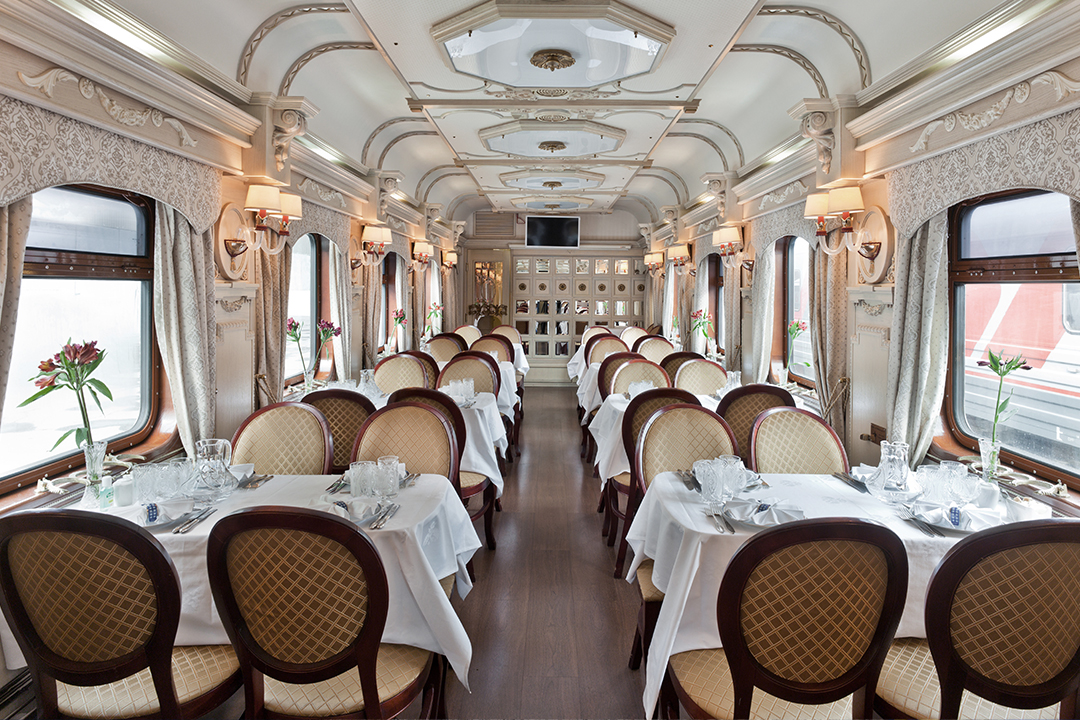 Restaurant inside the train

Traces of High Society on Trains
The British entrepreneur who had been exporting high-end wines to all over the world had a complete understanding of the Western European high society. He traveled on Russian railways himself to develop a better sense of local characteristics and sensibilities. Littler sought to combine ‘luxury’ and ‘travel.’ A major development took place in 2007, as HRH Prince Michael of Kent launched the Golden Eagle Trans-Siberian Express himself. Following his investment, Golden Eagle acquired a 21-carriage train worth $25 million. The train offered 66 luxurious suites. In 2012, the name of the company changed from GW Travel to Golden Eagle Luxury Trains Ltd. Three years later, Golden Eagle purchased the Danube Express from the Eastern Europe. Golden Eagle has continued to grow. 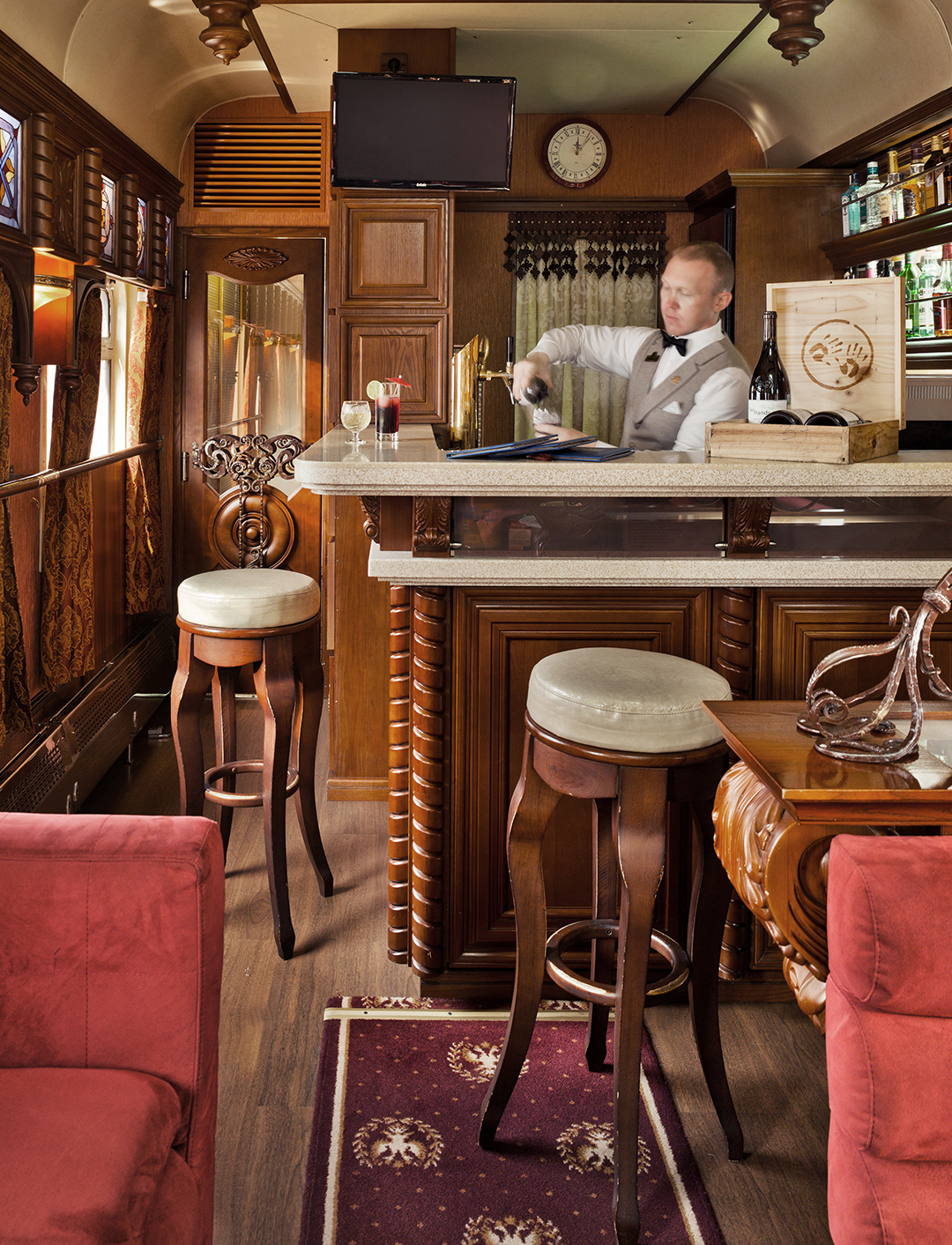 Bar lounge inside the train

Golden Eagle’s Trans-Siberian service is extravagant. And there’s also something special that money alone can’t buy. You can travel with a celebrity host. In the summer of 2019, Princess Katya Galitzine served as host. The Galitzine family is one of the most famous aristocratic families of Russia, and Katya Galitzine is a direct descendent of Catherine the Great. She doesn’t just live off the fame of her ancestors, though. She is one of Russia’s top history writers in Russia. The bilingual Galitzine went through histories of each destination for the passengers in both Russian and English. 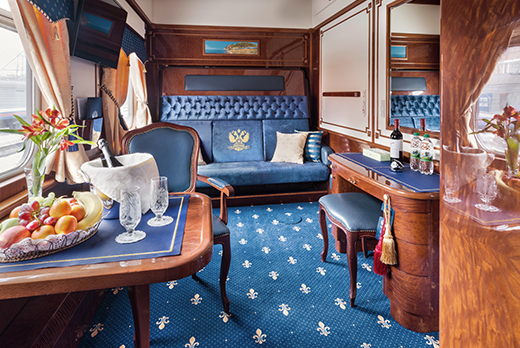 Imperial Suite inside the train 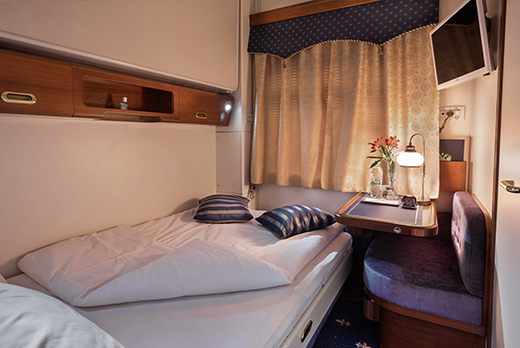 Silver Class inside the train

Over the course of the long journey, the Golden Eagle train serves a wide variety of specialties and performances. But the company doesn’t necessarily promote fine dining and elegant performances because they’re just basic components of the travel. The Golden Eagle Trans-Siberian train captures the essence of the European aristocratic culture, and that’s what makes it so fascinating. 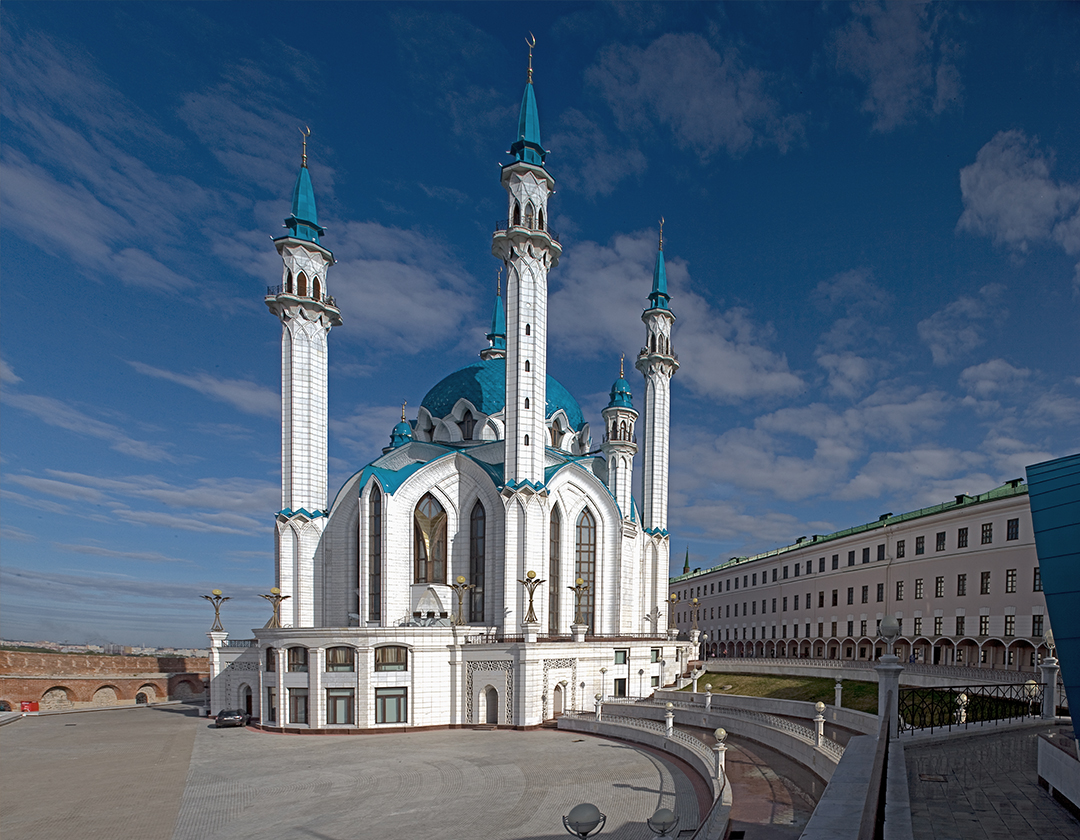 From Europe to Asia
The Golden Eagle Trans-Siberian journey is 15 days long. You can depart from Moscow or Vladivostok. On the first day, passengers are invited to a champagne reception, and that’s the same whether you’re boarding the train in Moscow or Vladivostok. The dinner served with specially selected international wines will officially launch the travel. Passengers will spend the first night at a hotel. Those leaving from Moscow will have a tour of the Russian capital on Day 2. The program takes passengers through the Kremlin, Red Square, St. Basil’s Cathedral, GUM Department Store built in Tsarist times, and museums. Passengers will be treated to the 19th century Russian cuisine. After a champagne party at the Imperial Waiting Room at Kazansky Station, guests will finally board the train. You’ll then wake up to the view of Kazan, the capital of Tatarstan. Kazan is one of the oldest cities in Russia and all of Eastern Europe. During the 15th and 16th centuries, it was the capital of the Khanate of Kazan, which ruled Russia. Just as most of the Mongolian states in Central Asia did, the Khanate of Kazan became Islamic. Today, Kazan has a mix of the Russian Orthodoxy and Islam, giving it a far different vibe than Moscow. 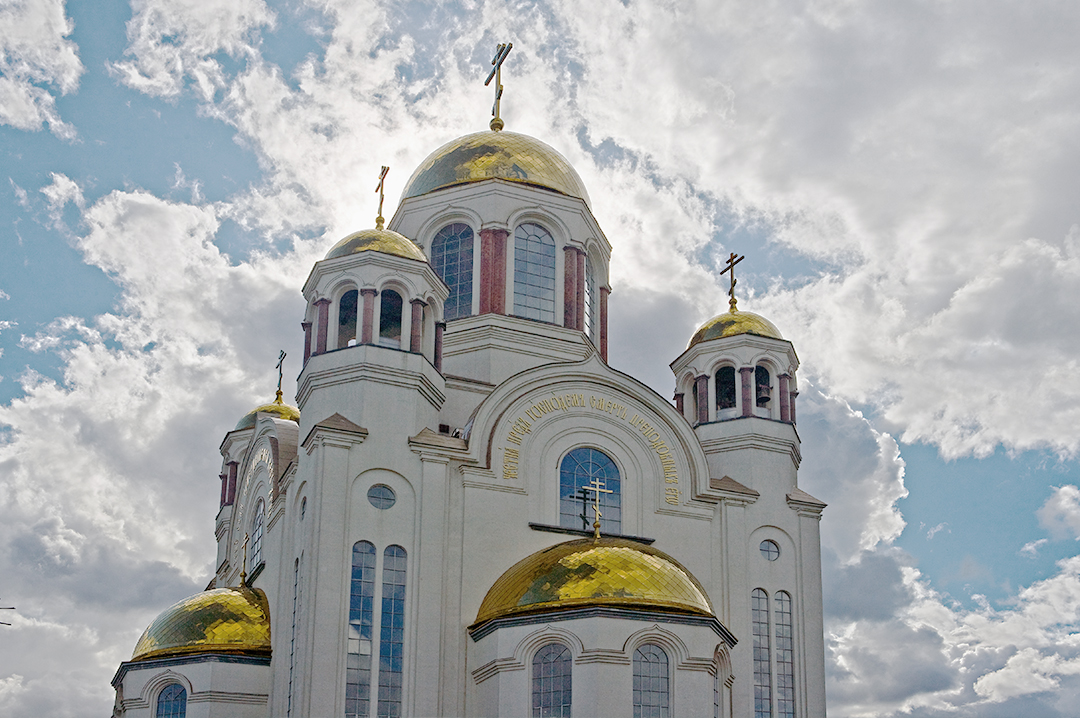 The Church on Blood in Yekaterinburg 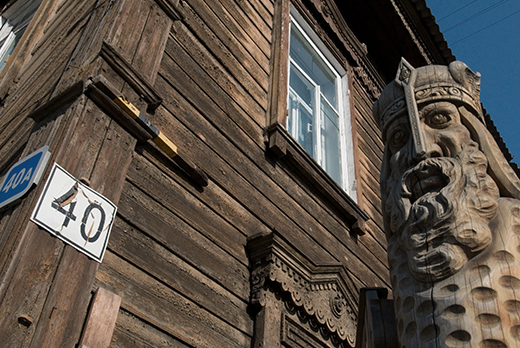 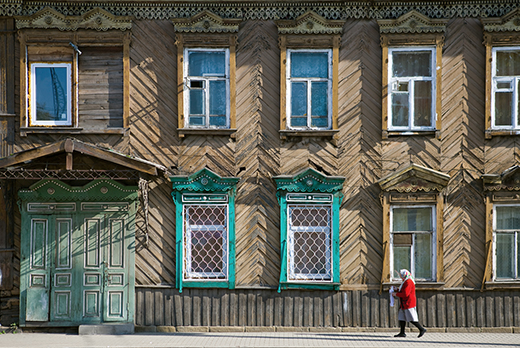 You’ll arrive in Yekaterinburg of the Urals by the fourth day. The Ural Mountains, stretching for 2,000km, cut Russia in half. To their west lie St. Petersburg, Mocow and Kazan, cities that we’re mostly familiar with. And Siberia starts from the east of the mountains. Yekaterinburg also has the obelisk marking the border between Europe and Asia. Novosibirsk, the destination on Day 5, is a modern, industrial city. Passengers will stay on board in the sixth day as the train takes you through the western Siberia. By Day 7, you will arrive in Irkutsk, the ‘Paris of Siberia.’ With stones in short supply, Irkutsk has many wooden buildings more than 200 years old. The train will stop at Lake Baikal, the world’s deepest lake on Day 8. It holds 20 percent of the world’s freshwater, and it is as vast as the ocean. In fact, one side of the lake is known as the ‘big sea,’ and the other side is called the ‘small sea.’ The train winds through tunnels on the cliff-hugging tracks along the lake for five hours. Once it comes to a stop, passengers will get to enjoy the Russian barbecue Shashlik and smoked omul fish, caught only in Lake Baikal. 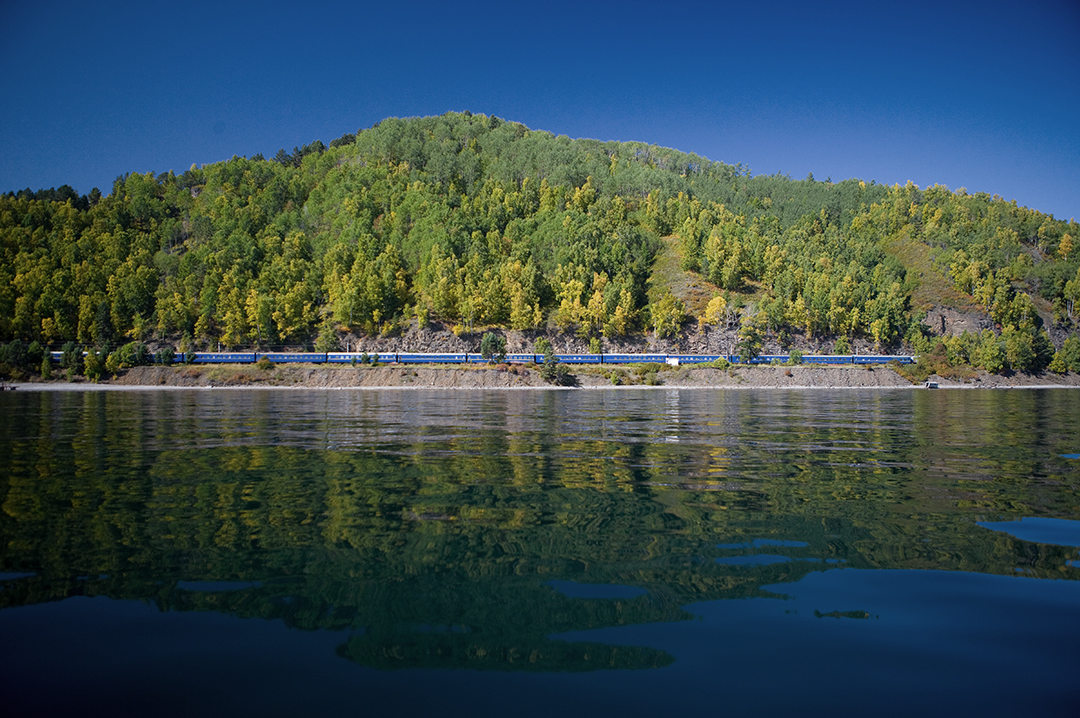 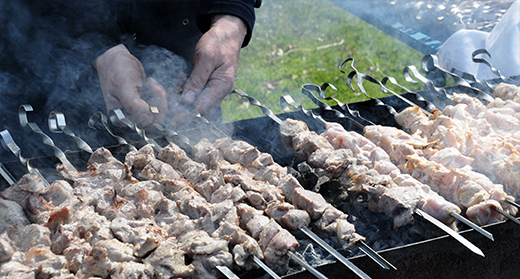 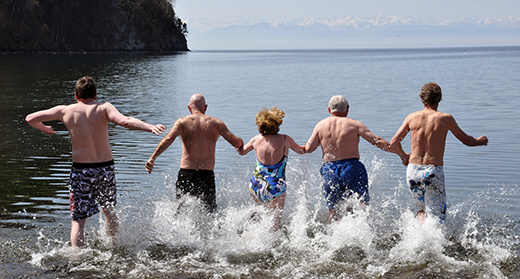 Once the train pulls over by Lake Baikal, passengers get to enjoy Shashlik skewers and swimming.

On the ninth day, the train pulls over in Ulan Ude, the capital of Buryat Republic. The local culture is rooted in a strong folk religion tradition, and its culture is closer to Mongolian than Russian. From Ulan Ude, the train turns south rather than east, and takes you to the Mongolian capital Ulaan Baatar. Genghis Khan is synonymous with Mongolia, and you’ll see a huge statue of the country’s founder. Nomadic Gers and flocks of sheep will appear, too. The nomadic culture of Central Asia is vastly different from Russia. Passengers will then stay on the train for three days as it travels eastward along the Amur River. The landscape outside the windows will change season to season. In winter, you will see snow-covered fields and peaks. The summer will offer you views of birch forests and wild flowers. By Day 14, the train stops at Vladivostok, the port city at the southeastern end of Russia. It’s time for passengers to say goodbye to the luxury train. 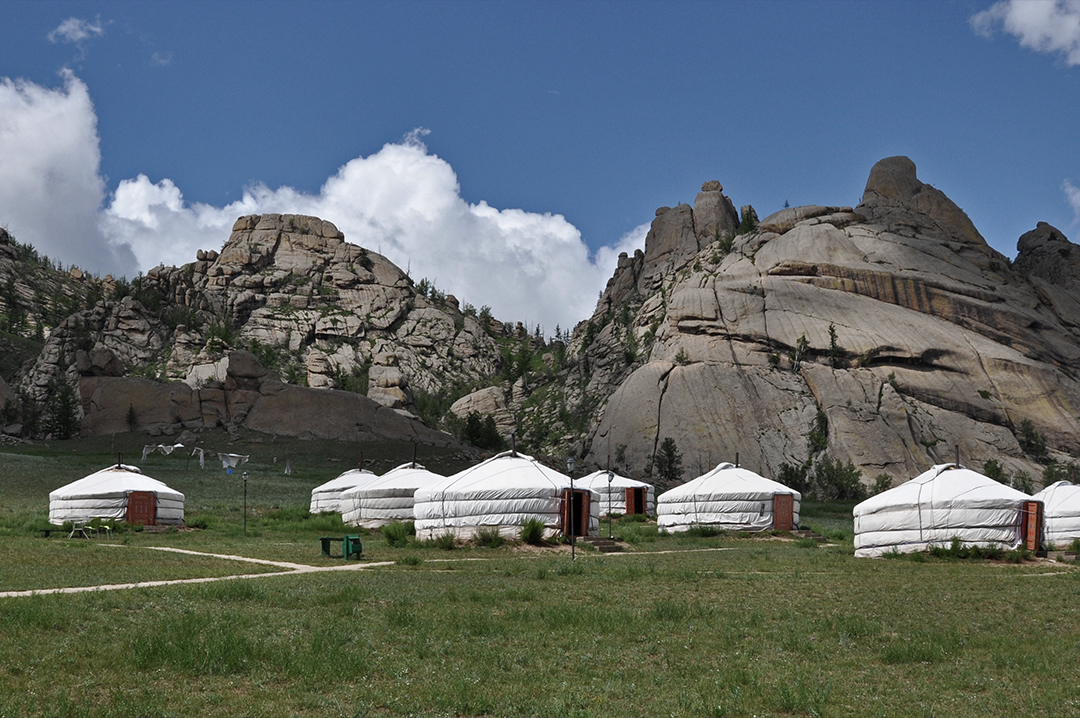 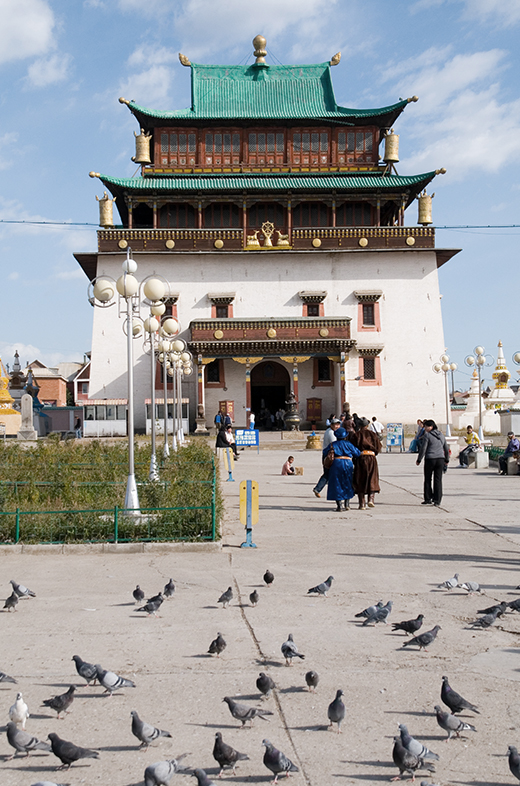 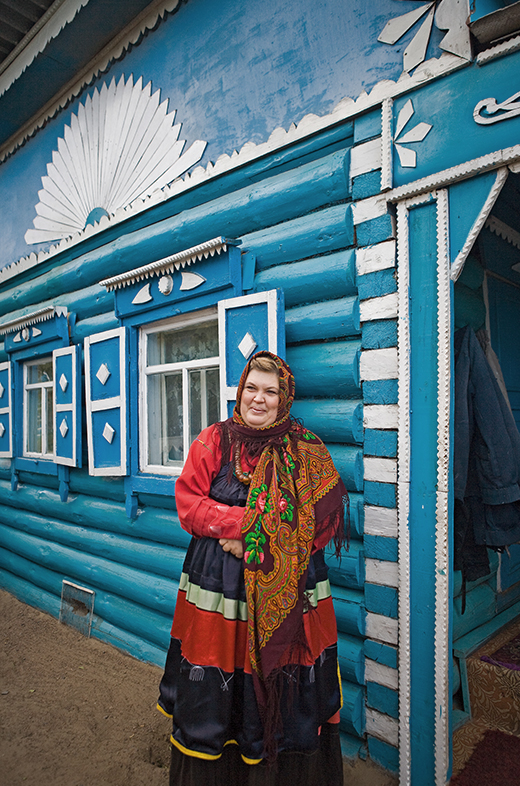 A woman in Ulan Ude

Following the farewell dinner, travelers will spend their final night at LOTTE HOTEL VLADIVOSTOK, the finest hotel in town. Getting to stay at LOTTE HOTEL VLADIVOSTOK is one of the reasons why we’d recommend taking the eastbound trip on the Golden Eagle Trans-Siberian Express. Spend more time in Vladivostok on 15th day after breakfast, and then head over to the airport for your flight home.
The journey will cost over 20 million won, with a deposit between 1.5 million won and 5 million won. That’s the price tag of seeing a quarter of the world in the most luxurious way and experiencing Europe and Asia altogether. It seems well worth the money. 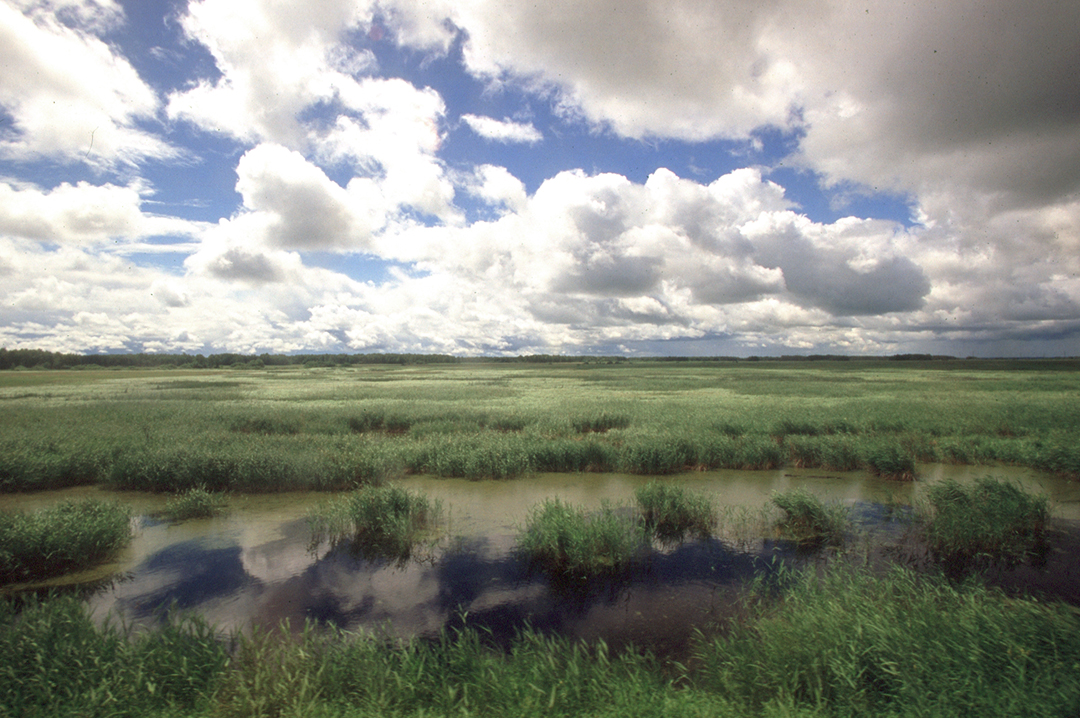 Where to Stay in Vladivostok: LOTTE HOTEL VLADIVOSTOK
LOTTE HOTEL VLADIVOSTOK is the first five-star hotel in Vladivostok and has been recognized as the best hotel in the Russian Maritime Province by the local government. The hotel stands in the business and cultural center of the city. It offers a Korean restaurant, an indoor pool, sauna and fitness center. From the comfort of your room, you can see the downtown, Golden Horn Bay and Amur Bay. The Sky Lounge offers a spectacular view of the entire Vladivostok, and major attractions are all within walking distance. 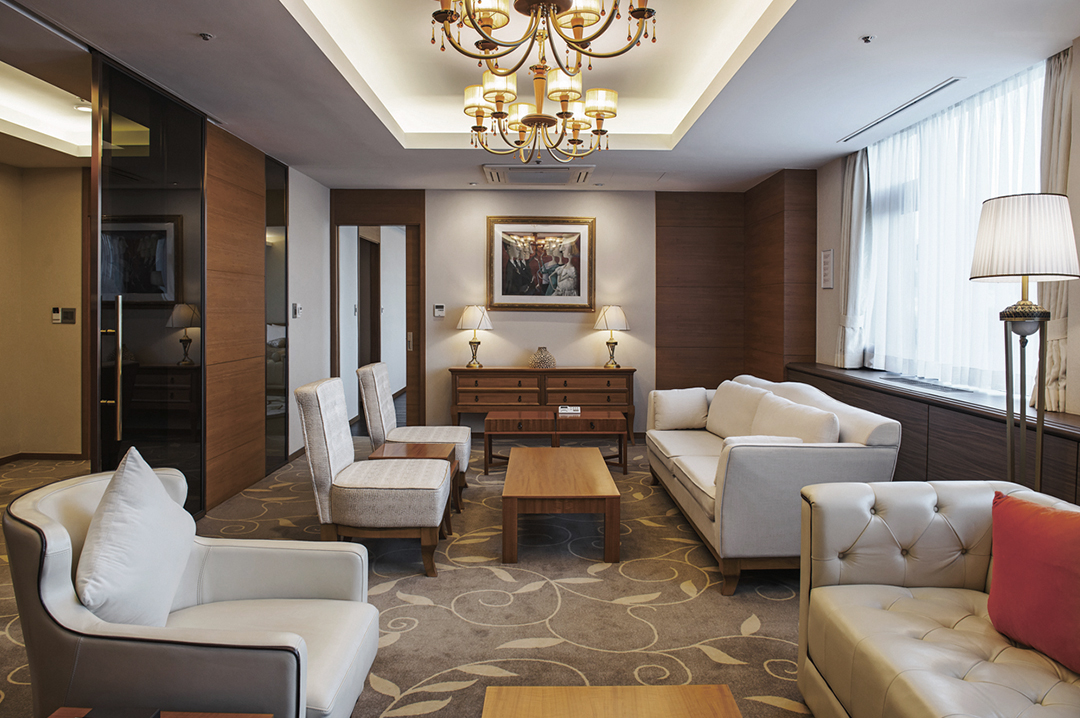