Explore Kamchatka, Nature in Its Truest Form
Ancient nature is still alive in the Kamchatka Peninsula in Russia’s Far East. We embark on a journey to one of the few pristine wilderness areas of the world where civilization has yet to overtake mother nature.
Faraway Treasure Island of Russia, Kamchatka
Russia has a massive land mass divided by 11 time zones. People of Russia have a unique sense of distance, living in such a large country. However, Kamchatka is an exception. The name of the peninsula is often used to express ‘a faraway place’ in Russian culture. As a matter of fact, the Kamchatka Peninsula, stretching between the Sea of Okhotsk and the Bering Sea, is not connected to the continent via railway, so the best way to go to the peninsula is through air travel. Locals call Kamchatka an ‘island’ for that reason. Despite all these logistical hurdles, the Kamchatka Peninsula is a rare treasure island offering an unspoiled natural environment, many species of endangered animals, gigantic volcanoes, and abundant natural resources. It is a place absolutely worth visiting.

Kamchatka, a Former Exploration Station
You may wonder who first came to this distant location, and how? In the mid-17th century, the Kazak people of Russia discovered Kamchatka which later became Russian territory. However, it wasn’t until the 18th century, after Peter the Great sent expedition teams to explore the end of the continent, that a permanent Russian settlement appeared in the area. Denmark-born Russian explorer Vitus Bering reached Kamchatka in 1740. The name of expeditionary settlement 'Petropavlovsk' is from expedition ships, St. Peter and St. Paul. ‘Petropavlovsk-Kamchatsky,’ the largest city and the present-day administrative center of Kamchatka Krai, also shares the origin of the name. 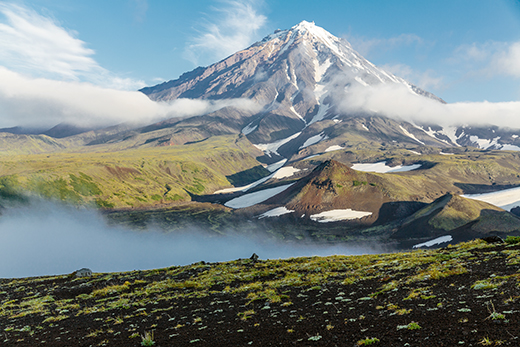 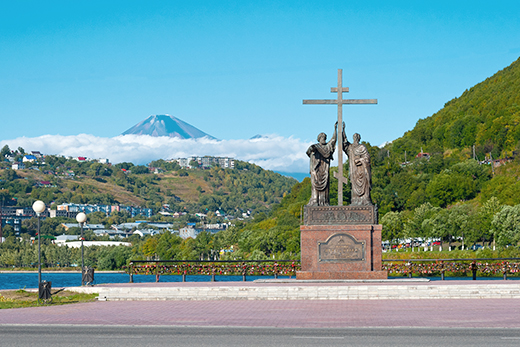 Statues for Peter and Paul in Petropavlovsk-Kamchatsky © Shutterstock

Volcanoes Untouched Since Time Immemorial
A sculpture of two bears greets you near Petropavlovsk-Kamchatsky Airport after a 3-hour flight from Vladivostok. The monument has a sign that says “Russia starts here.” against the backdrop of Koryakskaya and Avachinskaya volcanoes covered in snow. This would be your first encounter with a volcano in Kamchatka. The large group of volcanoes on the peninsula was included in the UNESCO World Heritage List in 1996 for their beautiful natural scenery and diversity of wildlife. Among 300 volcanoes, 29 of them are active. 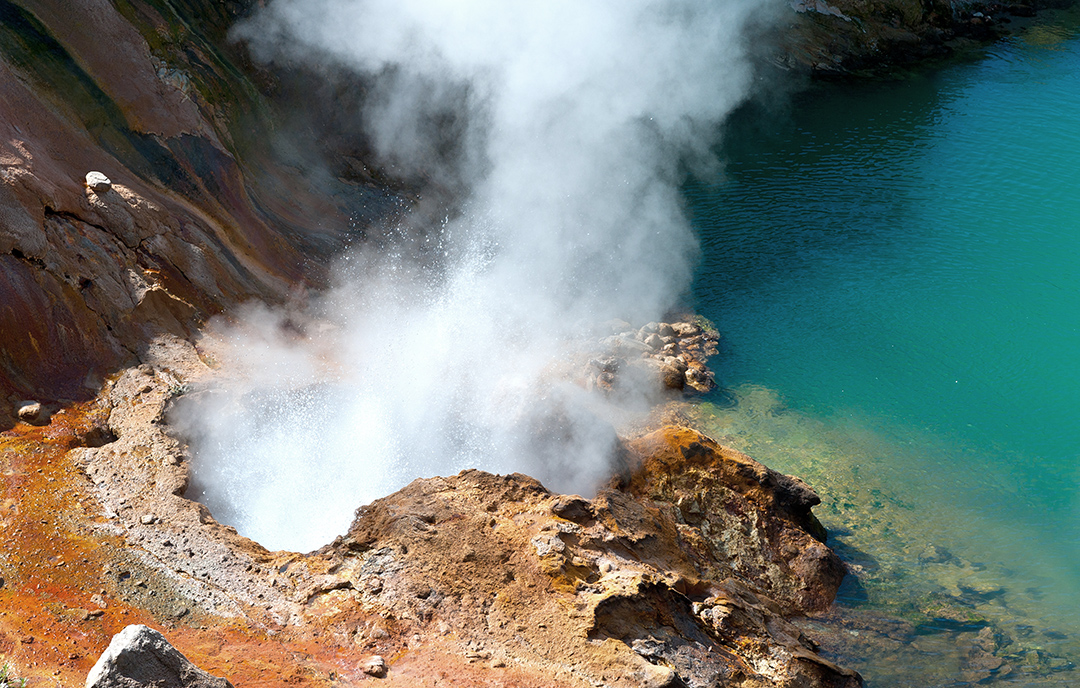 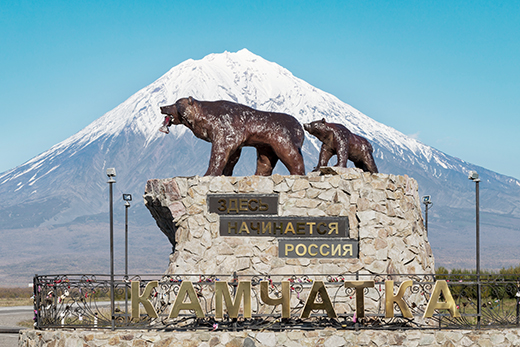 A bear sculpture with the words, “Russia Starts Here.” © Shutterstock 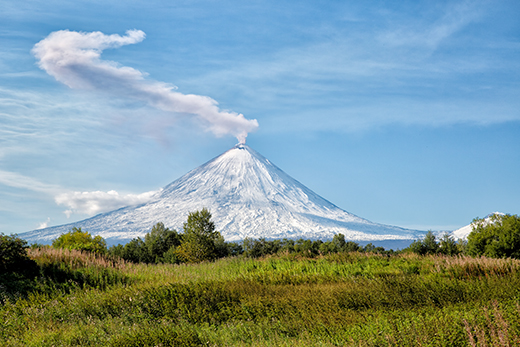 The density of volcanoes in this area is due to the location of the Kamchatka Peninsula sitting on the Pacific Ring of Fire where the Eurasian Plate collides with the Pacific Plate. It’s an ongoing natural event, constantly giving birth to natural wonders including volcanoes, glaciers, geysers, hot springs, and lakes. Klyuchevskaya is the tallest peak, among active volcanoes in Eurasia, measuring 4,750m height. The 7,000-year-old volcano has recorded 50 eruptions in the last 300 years, and is still active, which raises the altitude every year.

If you want to experience the life force of a volcano up close, you must make arrangements with a local travel agency that has a government-issued entrance permit. A large area of Kamchatka either has rugged terrains or falls under the conservation zone managed by the government. A special means of transport such as helicopter, off-road SUV, and army vehicle are required to enter the volcanic area. There is a famous volcanic sightseeing spot perfect for a helicopter ride in July and August. It’s the Valley of Geysers in the Kronotsky Nature Reserve, located in northeastern Petropavlovsk-Kamchatsky. The valley presents a dreamlike, mystical scenery that gives an impression that Earth is about to be reborn. The distant snow-capped mountains and a river streaming down green hills offer a backdrop for bubbling hot springs, fuming geysers, and boiling mud pools. In this otherworldly place in the Kamchatka Peninsula, you encounter a living, breathing nature. 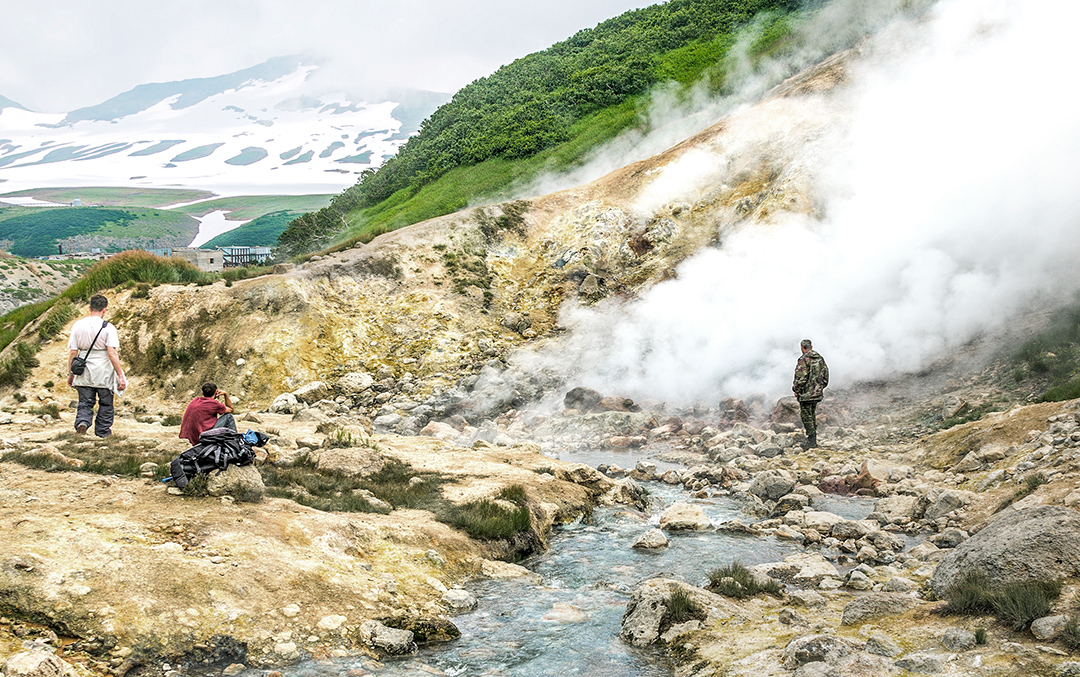 Time of Recuperation in Outdoor Hot Springs
After the volcanic trekking is over, it is time to unwind and relax in hot springs. The unspoken rule of preserving nature in its original form also applies to hot springs that most facilities are built to minimize their effect on nature. Head to the Nalychevo Nature Reserve on a helicopter to experience an open-air spa in wilderness. Surrounded by volcanic mountains, this Nalychevo oasis was formed when over 200 hot springs converged in the area. 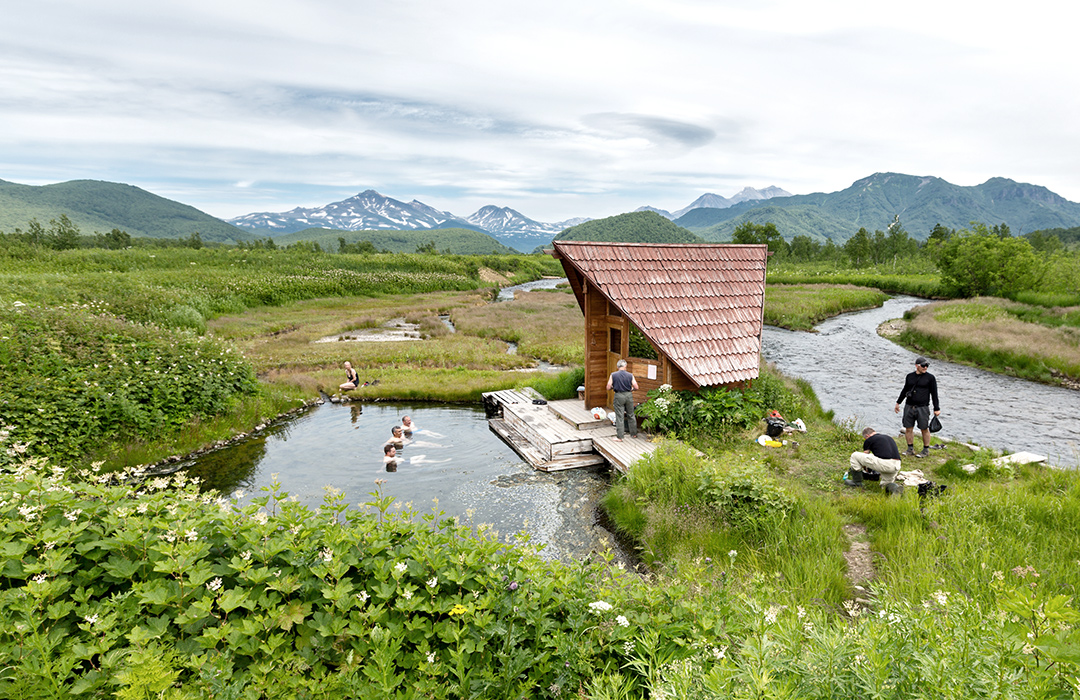 Bask in the waters whose temperature reaches 75℃ max and enjoy the stunning landscape of Kamchatka. It will not only relax your body but also your soul. The waters contain various minerals such as silica, arsenic, and boron which are believed to have therapeutic effects on cardiovascular, musculoskeletal, neurological conditions, as well as skin conditions such as bruises and cuts. According to a local legend, a man who enters the waters of hot springs in the Nalychevo valley at first light will be able to cognize the secrets of perpetual youth, beauty and health. 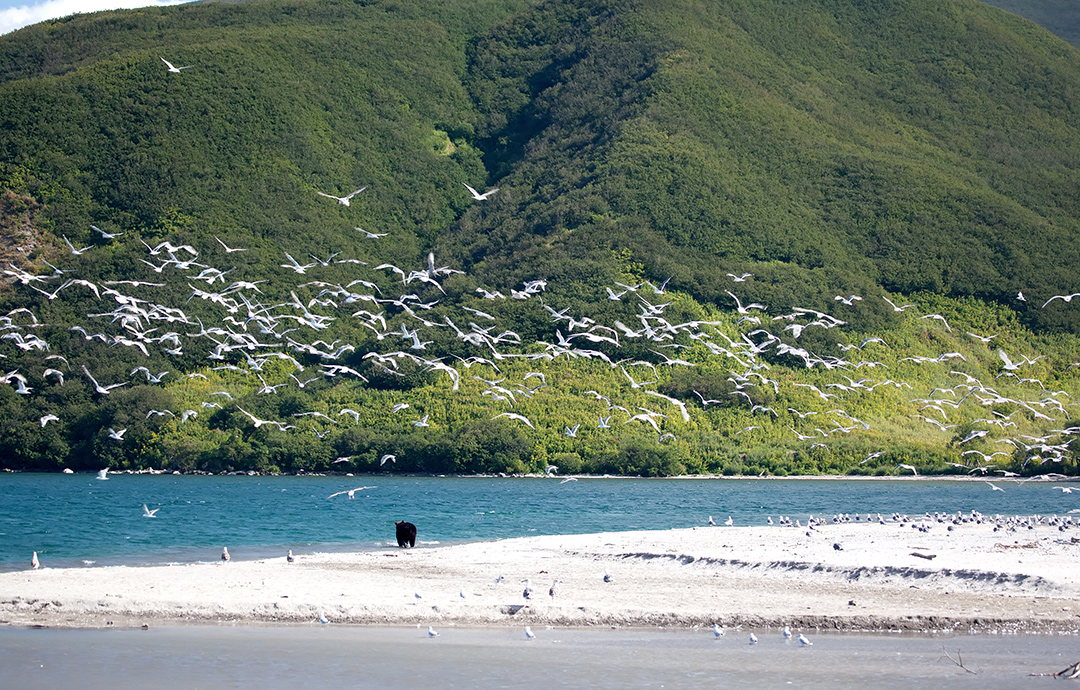 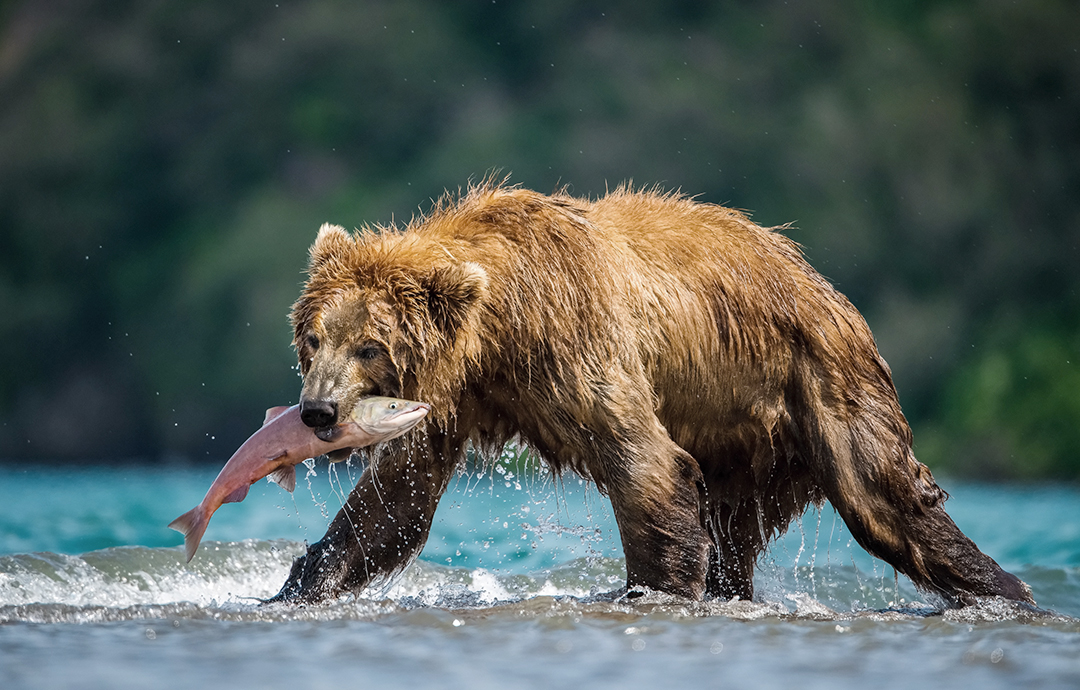 Encounter With Brown Bears Fishing for Salmon
Russia is famous to us as ‘The Kingdom of Brown Bears.’ About 12-15% of that bear population is in Kamchatka. Kuril Lake, situated in the south of the peninsula, is home to some 1,000 brown bears. A fresh-water lake formed by a volcanic eruption, Kuril Lake is the deepest lake in Kamchatka, reaching a depth of 316m. It is one of the better-known salmon spawning grounds in the Pacific region. From July to September when millions of salmon swim upstream, brown bears also gather around the lakeshore to feed. For locals, it is a brown-bear hunting season, and for tourists, the best time to watch brown bears. Brown bears have poor eyesight, so it is feasible for people to watch, quietly from a distance, brown bears acting as usual. Snatching up salmon from the lake, caring for cubs, and resting on its belly, brown bears charm their audience. There may also be some rare bird species flying around the fishing bears, such as Pacific gulls, Steller's sea eagles, and golden eagles. 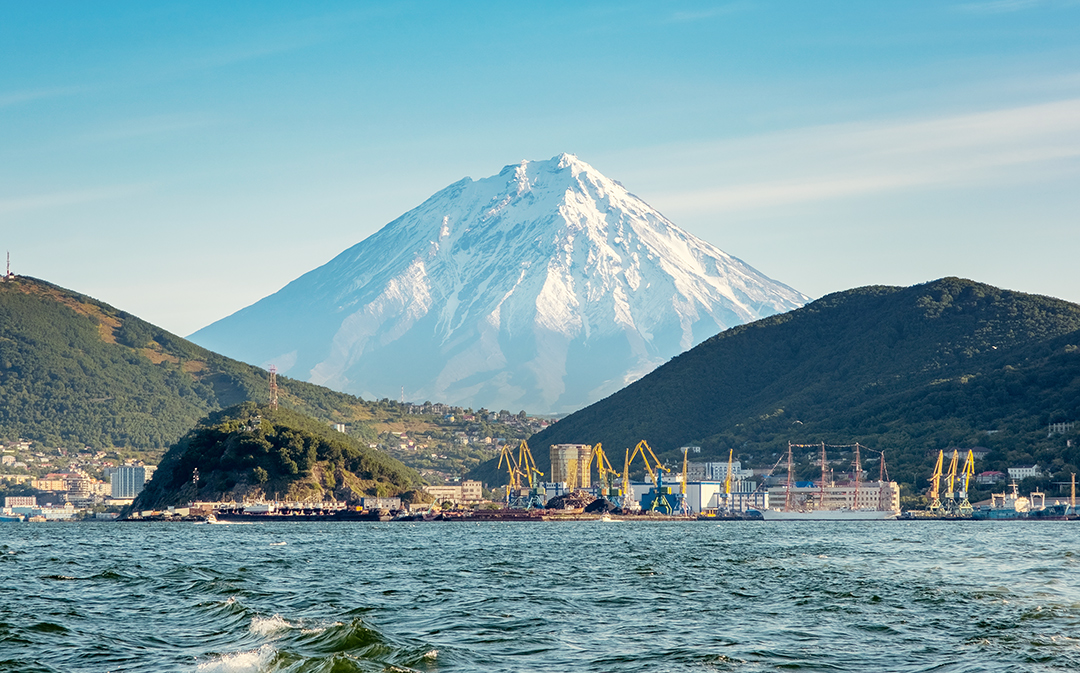 From Avacha Bay to Sea, Blessed Kamchatka Ocean
The seas of the Kamchatka Peninsula are full of natural attractions. Petropavlovsk-Kamchatsky is a port city built on Avacha Bay where the Pacific Fleet had landed centuries ago. A marine boat trip departing from the bay is famous for its beautiful tour route. First, you will pass by the Three Brothers’ Rocks on the way to the Pacific Ocean. The legend has it that an angry god of the sea turned into rocks the three brothers who blocked a giant wave with themselves to save the village from going underwater. After hearing the story, you may find that the tall stones appear more dignified. When the boat reaches the Pacific Ocean, start casting fishing rods from the deck to catch king crab, sea urchin, or flounder, all abundant in Kamchatka waters. The Russian name of king crab translates into ‘Kamchatsky Crab’ in English. 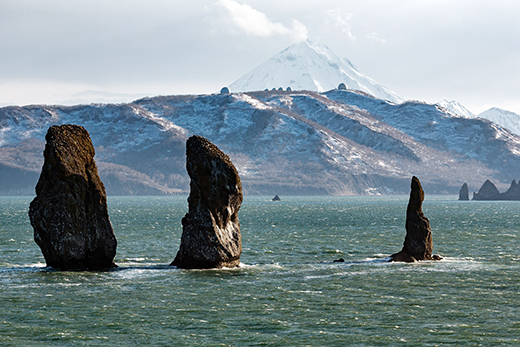 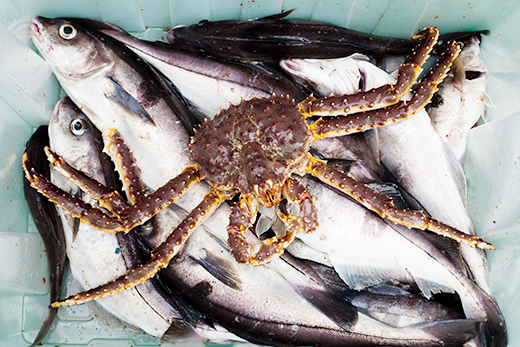 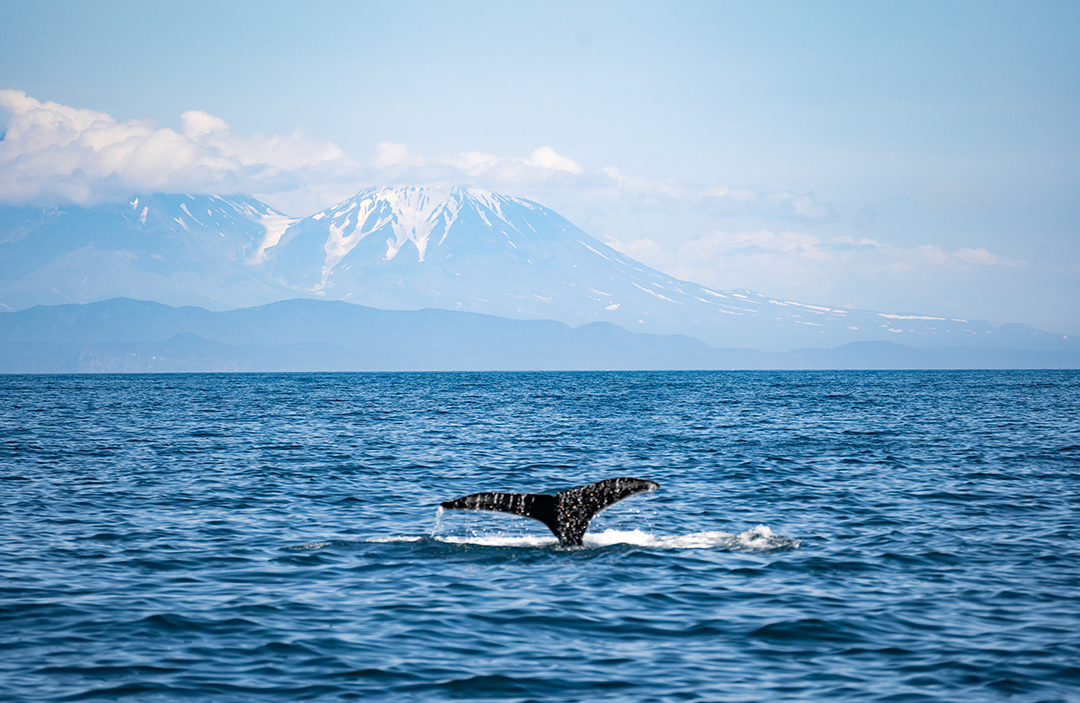 Lastly, the boat turns its key to the Bering Sea to sail to the Commander Islands, the largest marine reserve of Russia. This group of islands provide habitats for various marine mammals including seals, sea lions, and sea otters. Tens of kilometers before arrival, you can hear the animals barking. A sea lion swimming in the sea in a sleek fashion or resting on a heated rock bed shows that the place is a great haven for its likes. You can see a whale swim by graciously all the year over as there are over 20 species of whale living nearby Commander Islands. Giant orcas jumping off the sea or spewing water into the air is a common sight in Kamchatka but directly witnessing it is surely an unexpected joy. It is one of the gifts from an undisturbed nature. 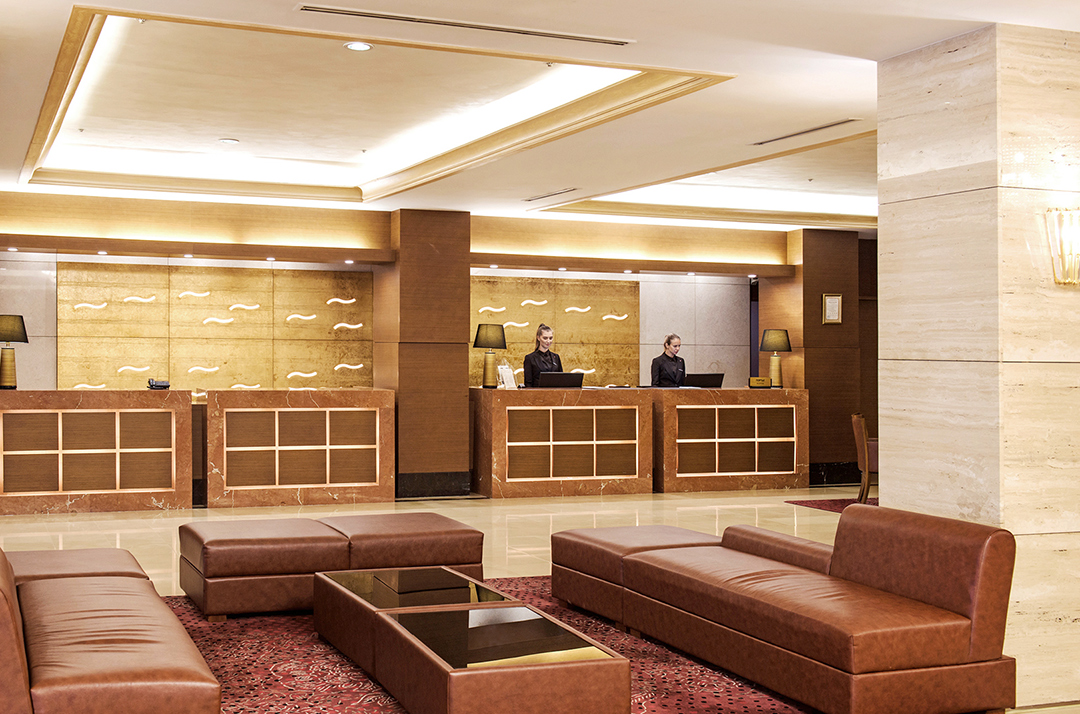 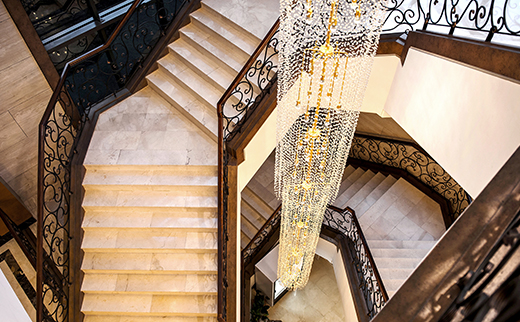 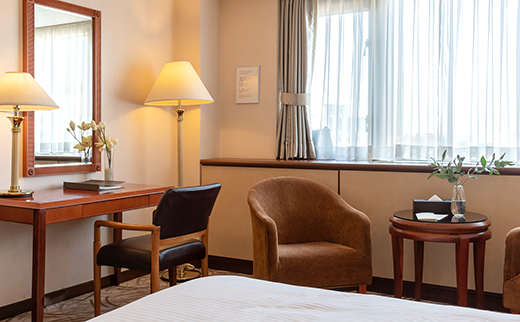 Where to Stay in Vladivostok: LOTTE HOTEL VLADIVOSTOK
Vladivostok is a typical stopover point on the way to the Kamchatka Peninsula. An hour drive from Vladivostok International Airport, formerly known as Knevichi Airport, will take you to LOTTE HOTEL VLADIVOSTOK. A total of 172 rooms and suites featuring classic yet modern decor are available, and you can choose one of the nine room types per the purpose of your trip. The hotel is conveniently located in the business and culture center of the city, making it easy to get to sightseeing destinations or use neighborhood amenities.
Address 29, Semenovskaya St., Vladivostok, Russia
Inquiry +7-423-240-22-33
Homepage www.lottehotel.com/vladivostok-hotel