Springtime in Paradise, Ninh Binh
A dreamy, delicate scenery on the border between real and imaginary worlds greets us. Here are things to see and enjoy in the Vietnamese version of Shangri-La, Ninh Binh.
“During the reign-period T’ai-yuan [326-97] of the Chin dynasty there lived in Wu-ling a certain fisherman. One day, as he followed the course of a stream, he became unconscious of the distance he had travelled. All at once, he came upon a grove of blossoming peach trees which lined either bank for hundreds of paces….The fisherman, marvelling, passed on to discover where the grove would end….He faced a spread of level land. Imposing buildings stood among rich fields and pleasant ponds all set with mulberry and willow. Linking paths led to everywhere, and the fowls and dogs of one farm could be heard from the next….White-haired elders and tufted children alike were cheerful and contented.”
From Tao Qian’s < Peach Blossom Spring >

Chinese poet Tao Qian, also known as Tao Yuanming, composed an extraordinary essay describing an oriental utopia with delicate descriptions. The essay < Peach Blossom Spring > depicts an ethereal place in his imagination. Prince Anpyeong in the early Joseon dynasty had a dream about going to Peach Blossom Land, and had court painter An Gyeon draw the dream. It’s the famous ‘Mongyudowondo.’ It’s not just Tao Qian or Prince Anpyeong that wishes to have an idyllic life in paradise. People all have their own paradise dreams inside of them. In Vietnam, there’s an actual place for these people. It is Ninh Binh province. 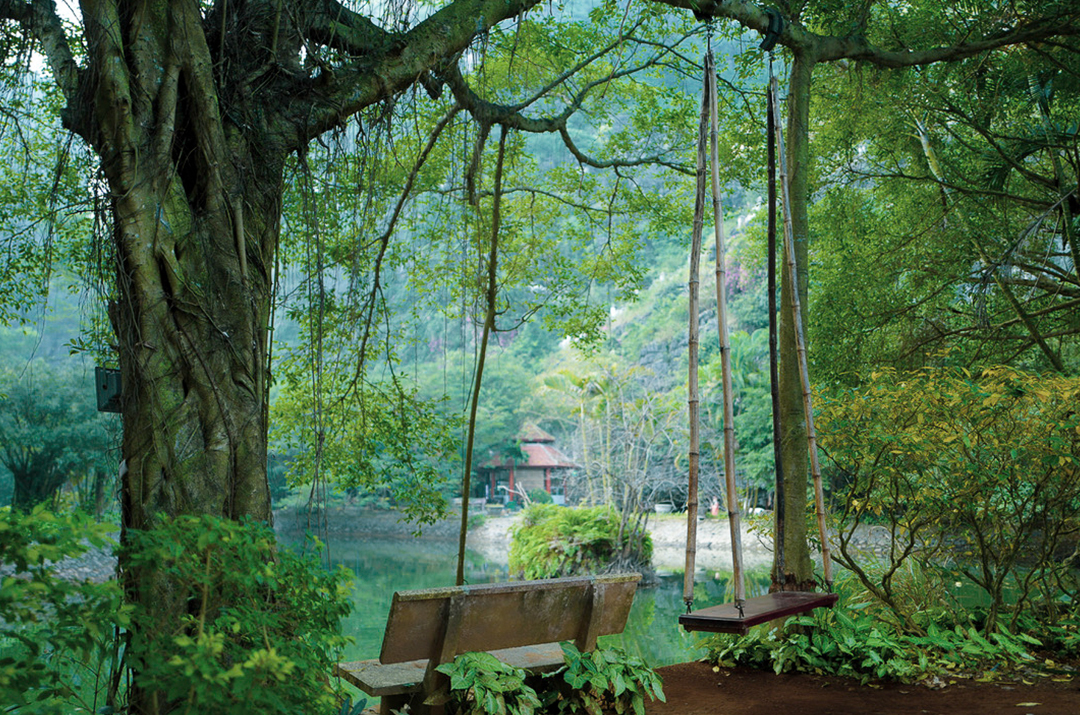 Ninh Binh is located 93km to the south of the Vietnamese capital of Hanoi. It is considered to be one of the best tourist destinations near Hanoi due to the fact that a two-hour drive from the capital will take you there. With the Trang An Landscape Complex in the Red River Delta, dubbed ‘Inland Halong Bay,’ Hang Mua Peak offering a stunning view of the mysterious land, and Hoa Lu full of remnants of an ancient Vietnamese capital, Ninh Binh is indeed a treasure island where multicolored jewels and gems give off endless sparkles over the bountiful nature and historic sites. 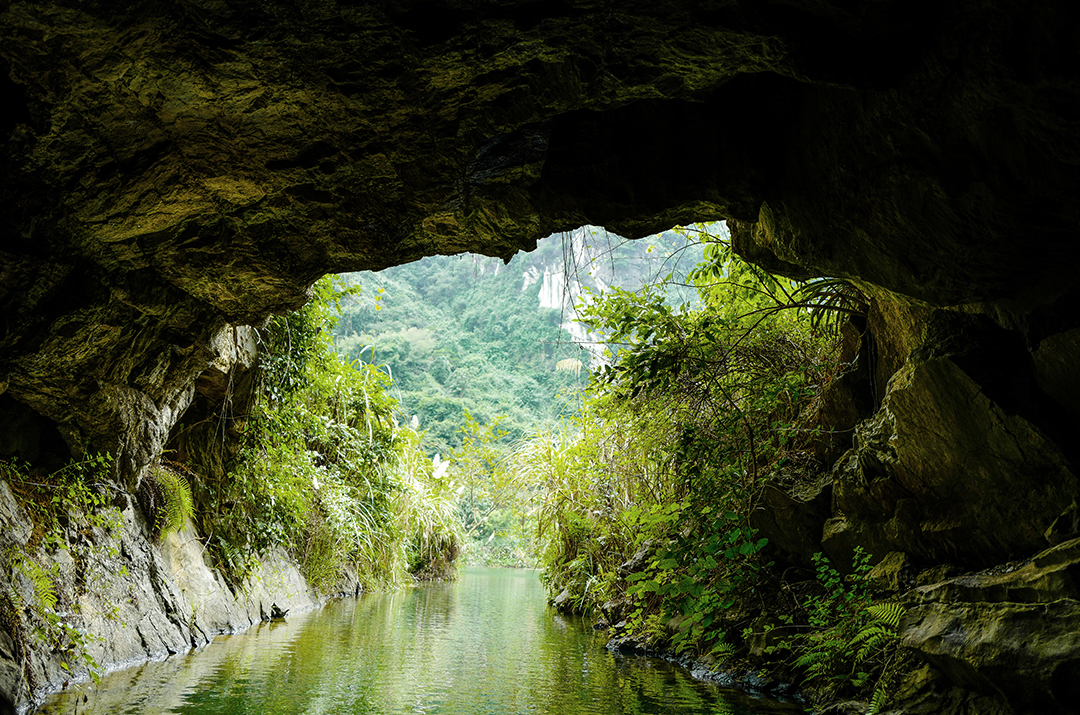 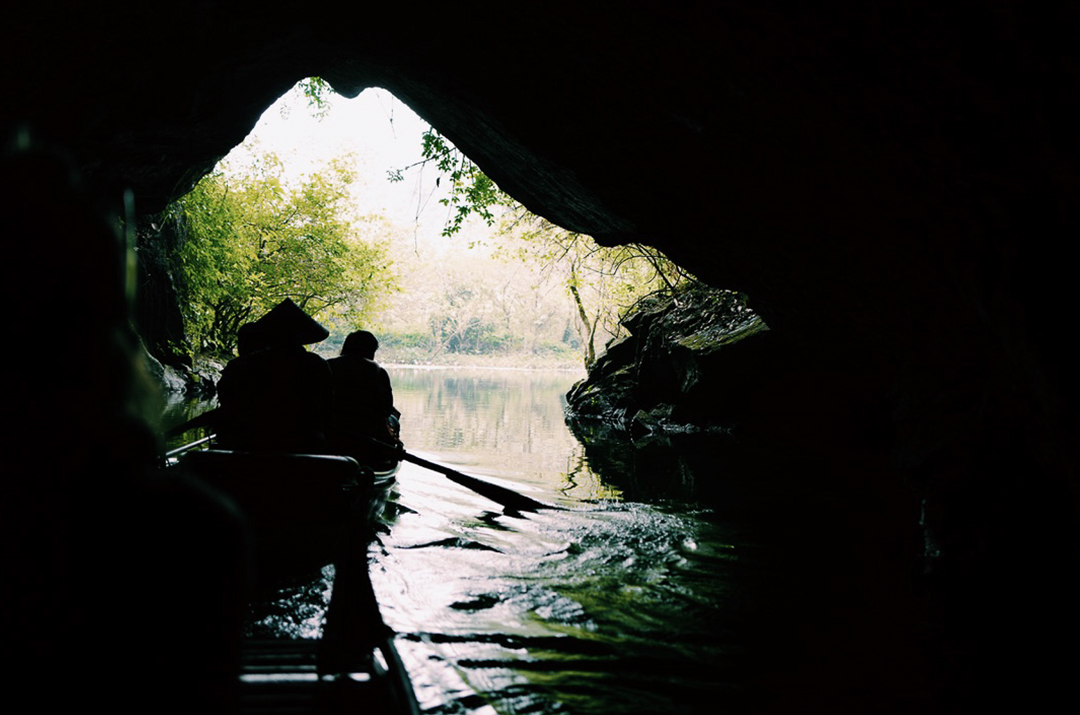 Most Romantic Rowing Boat Ride: Trang An and Tam Coc
Riding on a small rowing boat with a rowman, you get to explore the hidden natural wonders as the boat glides in between the karst mountains. The jaw-dropping landscape fills your eyes with scenes of colorful birds flapping their wings as they play by the water and mountain goats grazing on the steep mountain in twos and threes. Listening to the babbling sound of the river that soothes your mind and breathing in the nature-made scent, you won’t feel envious of anybody. All these fantasy-like images and impressions in Trang An and Tam Coc gave the region the nickname of ‘Inland Halong Bay.’ 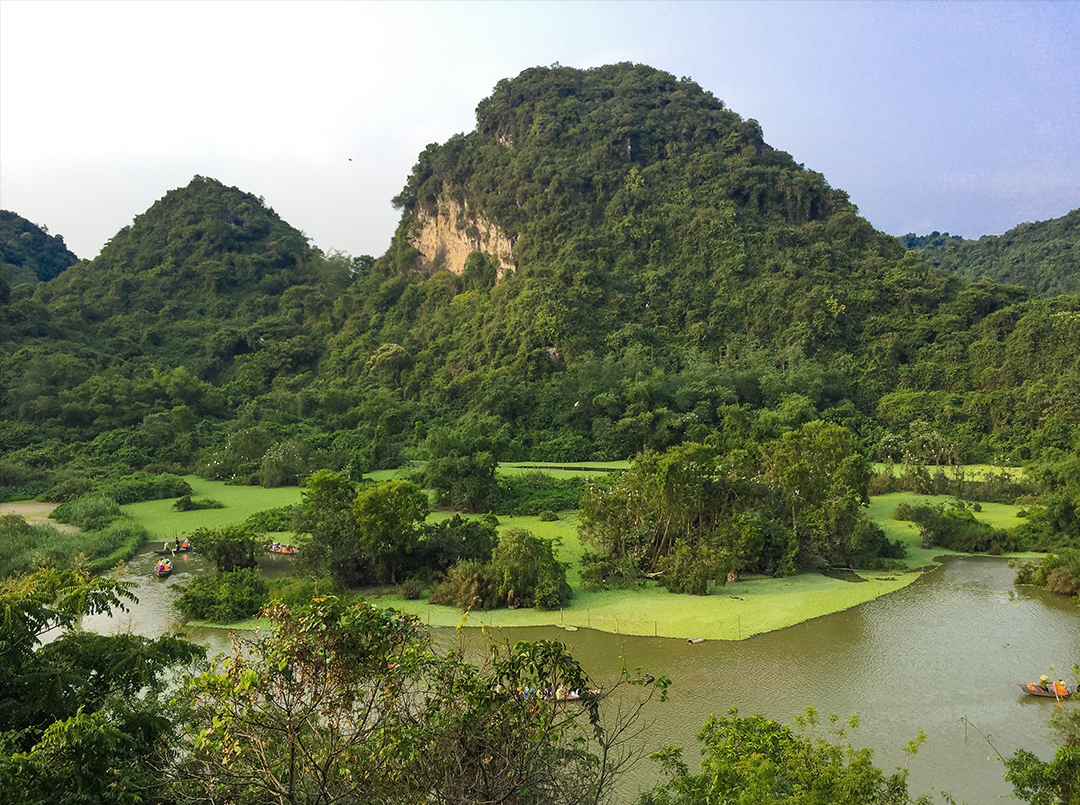 The rowing boat tour exploring karst grottoes of odd shapes along the river surrounded with towering limestone peaks is a highly recommended activity in Ninh Binh. You can come across a wide variety of flora and fauna because biodiversity in this region is well-preserved. Karst grottoes offer a chance to observe traces of natural history from a close distance. Some grottoes are just tall enough for a boat to pass. Trang An and Tam Coc are both beautiful and full of amazing sights, but Trang An is bigger and has a longer boat route. Tam Coc requires an hour or so while Trang An takes two to three hours for the boat ride. The Trang An Landscape Complex was registered as a UNESCO World Heritage Site in 2014. 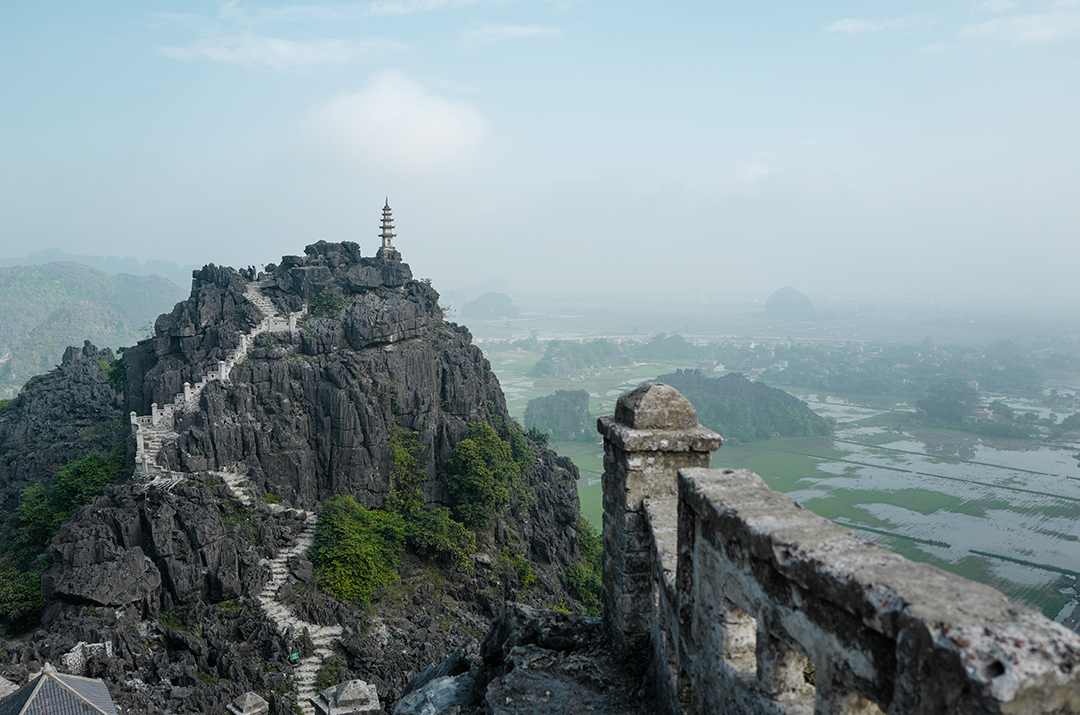 Steps at Hang Mua, inspired by the Great Wall of China © Jeon Haein

Art Carved by Nature and Time: Hang Mua
The Hang Mua hiking course is the highlight of the Ninh Binh tour for its breathtaking views from the top of the peak reachable by climbing about 500 stone stairs. Hang Mua means ‘dancing cave’ because the site is considered as the place where King Tran often went to hear the beautiful women sing and see them dance in the cave. Standing in the karst terrain, the tallest peak, Hang Mua, is a gigantic limestone mountain. To hike to the top of Hang Mua, you have to take the steps inspired by the Great Wall of China. Near the top of the peak stands a stone statue in the shape of a dragon, symbolizing rain, agriculture, and prosperity. 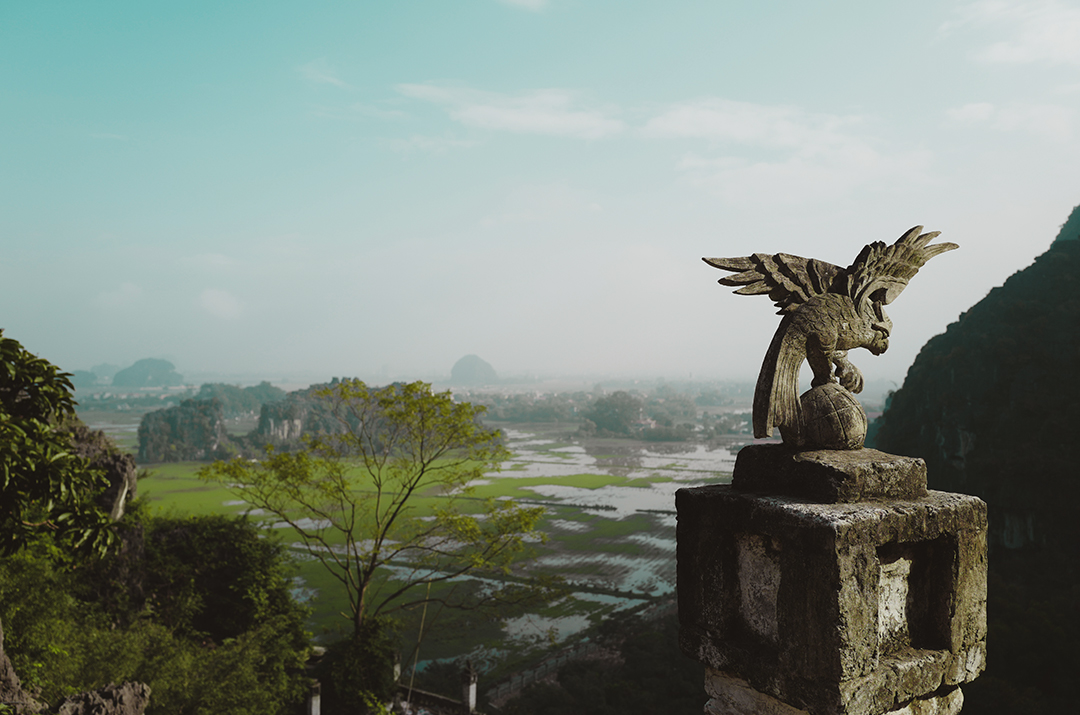 From the top, you get the full view of Ninh Binh. © Jeon Haein

Looking down from high up, Ninh Binh presents an unrivaled scenery. Green rice patches and the winding river interwoven with the karst terrain made over thousands of years inspire deep awe. Faced with the grandeur of nature and perseverance of time, people finally put down their woes and try to find peace. The moment of profound comfort in the arms of Hang Mua is how nature gives us a pat on the back for having traveled a long distance despite our daily struggles and anguish and probably why we continue to travel. 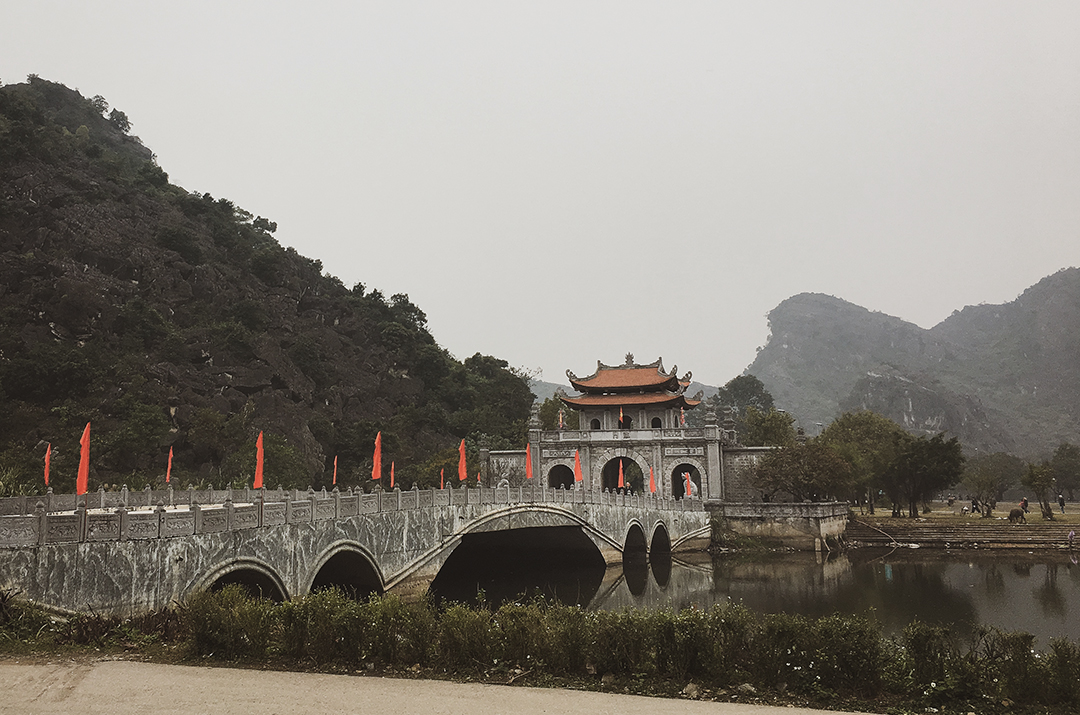 Ancient Vietnamese Capital: Hoa Lu
Hoa Lu used to be the capital of Vietnam between the 10th and 11th century. Historically, it is the very first capital city of Vietnam. The territory of the capital amounted to 3k㎡ including citadels. During the political and economical heyday of the independent polity, the limestone karst terrain featuring towering mountains served as a wall to defend the land from foreign aggression. The Hoa Lu region had everything needed for the best fortress. Although the majority of ancient kingdom and citadels is lost in the course of history, several remnants of the old buildings remain today, having survived the test of time. 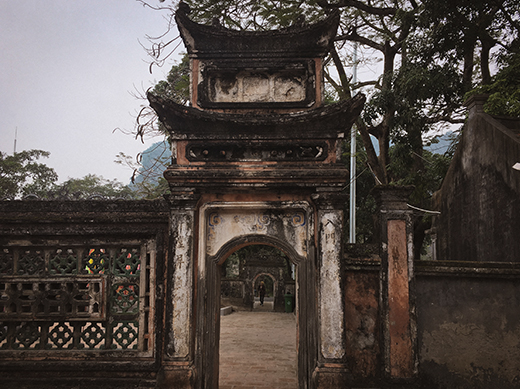 A building from about 10th century © Jeon Haein 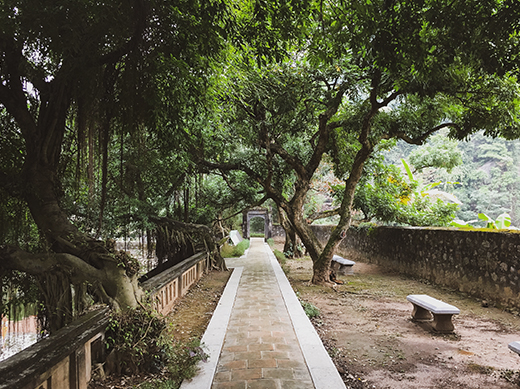 The best way to travel around Hoa Lu is by walking slowly and taking time to explore the historic sites. Walking through the arched gate and red-brick courtyard with caution, you can imagine what it would have been like a thousand years ago. Perhaps the old climbing plants covering the surface are the only clue to your imagination. You can also visit a temple built in honor of Emperor Dinh Tien Hoang, Emperor Le Dai Hanh, and Empress Duong Van Nga. If you are not sure about walking or if you’re getting tired from the walk, you can use a motorbike tour service that can be easily spotted near tourist attractions. 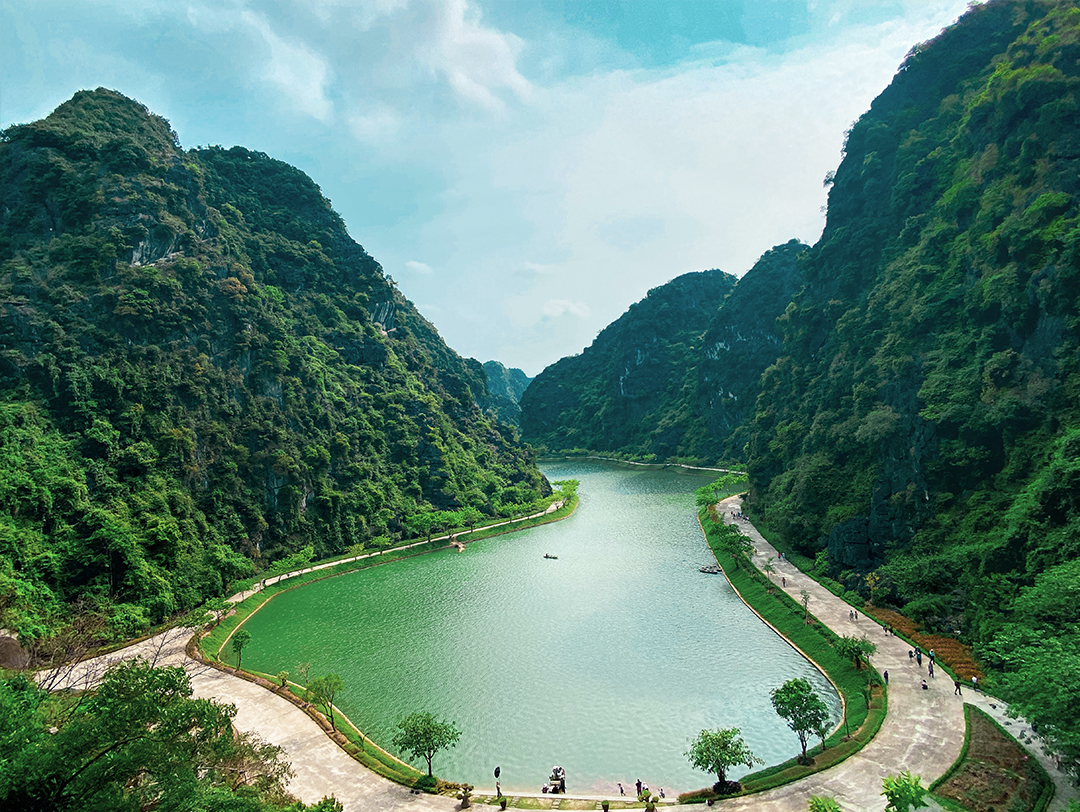 Secret Oasis: Tuyet Tinh Coc
A giant range of mountains embrace a lake which shines in otherworldly blue color. Tuyet Tinh Coc seems like a fjord used as a backdrop for the film < The Lord of the Rings > has been moved to Vietnam. It is rapidly gaining popularity as a tourist destination for local people. The surreal landscape makes it a prime choice for photo book and wedding photography shootings. Unlike other sites in Ninh Binh, Tuyet Tinh Coc is not too famous among foreign tourists. It’s recommended for those who like to discover hidden gems. 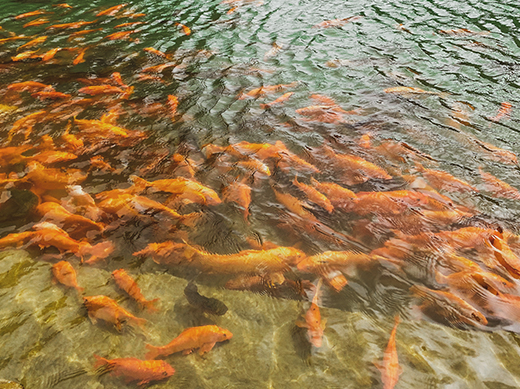 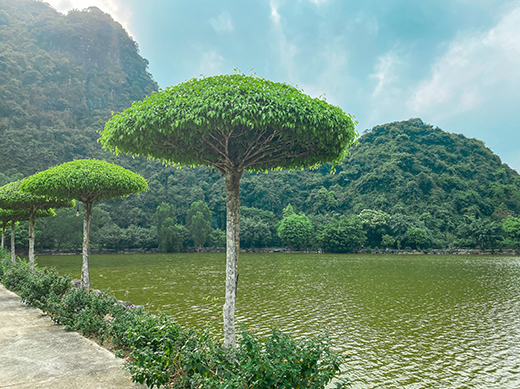 Ao Giai Lake has an ever-changing beauty fitting for its reputation of ‘a secret oasis’ cut off from the outside world due to the soaring walls of mountains. When the sun rises above the horizon, the green moss covering the bottom of the lake makes Ao Giai appear jade green. In the early morning and on a humid day, a white fog wraps around the air, giving a dreamy effect. In summer big, voluminous water lilies cover the lake. You will find a pagoda and a cave while strolling along the lake. Am Tien Pagoda, featuring 200 steps to the entrance, is a cave pagoda, where religious rituals were held including Buddhist ceremonies since the time of Hoa Lu ancient capital. Empress Duong Van Nga turned to religion in her later years and spent the rest of her life practicing Buddhism.

A speckless blue sky, crisp green forest, clear lake with a power to wash away every worldly concern, innocent chirping of birds, and quiet yet resilient flowers under the fog. Walking in Ninh Binh and letting the wind gently sway you, you can say goodbye to your complicated thoughts as you would blow away dandelion puffs. 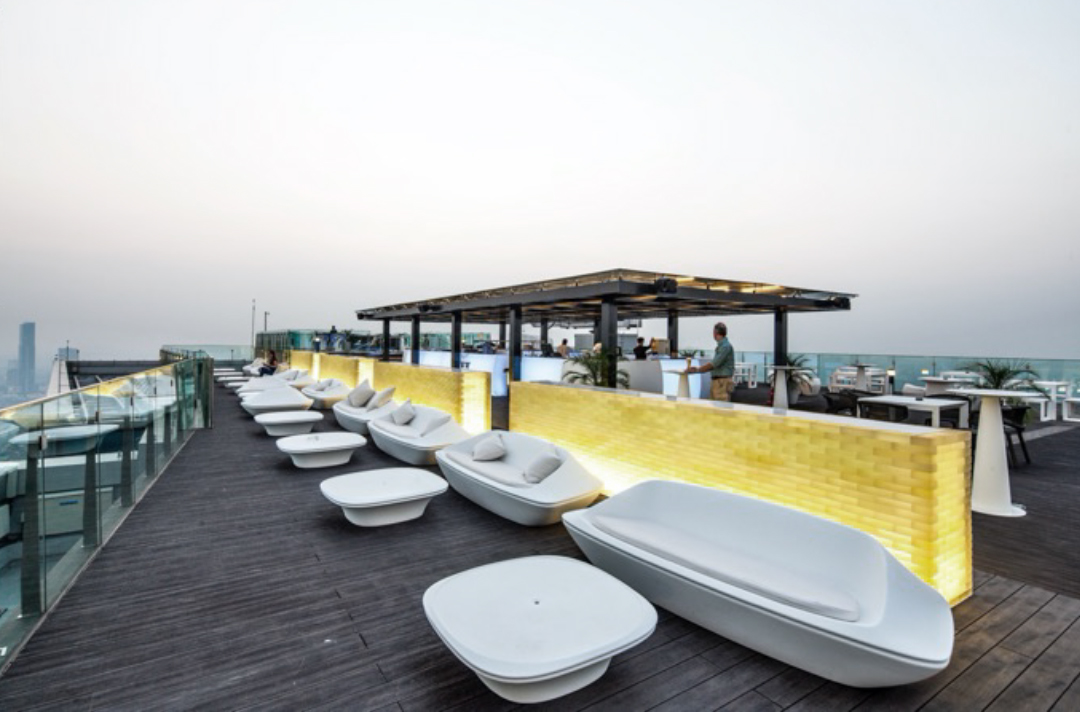 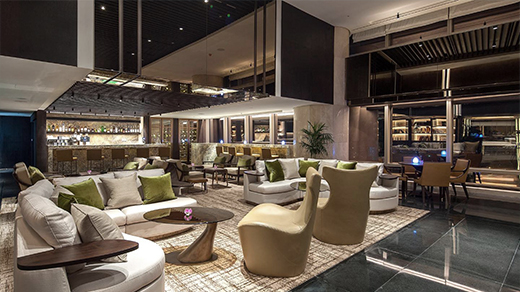 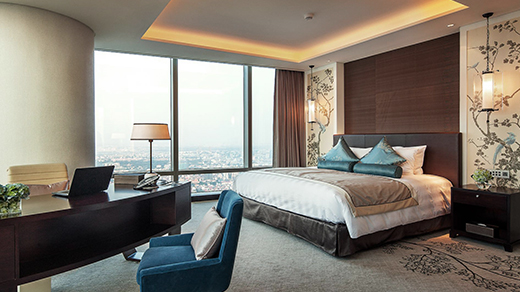 Where to Stay in Hanoi: LOTTE HOTEL HANOI
LOTTE HOTEL HANOI is located in the upper part of Lotte Center, a new landmark in the Vietnamese city. With a breathtaking view of the entire city, the hotel’s 318 rooms and suites feature traditional Vietnamese pattern designs. Along with Vietnamese specialty cuisine, LOTTE HOTEL HANOI offers top-notch meal options using only the freshest ingredients from across the world. Its rooftop bar is popular for the skyline view of Hanoi as well as its selection of cocktails.
Address 54, Lieu Giai St. Cong Vi Ward. Ba Dinh, Hanoi
Phone +84-24-3333-1000
Homepage www.lottehotel.com/hanoi-hotel