National Aviation Museum of Korea, Portraits of Korean Aviation Industry
The National Aviation Museum of Korea, offering a comprehensive look at the history of aviation and the industry’s present, is located near Gimpo International Airport in Seoul. At the museum, you can learn more about the history of aircraft and aviation technology in Korea, with interactive features readily available. It’s a perfect place to take your children on a warm, spring day in May.
The National Aviation Museum of Korea opened July 5 last year with little fanfare. Mass gatherings were out of the question due to the COVID-19, and promoting and celebrating the opening would have been a bad look. Visitors will tell you they wish more people knew about the place. It’s full of things to see and enjoy.
It was only a century ago that Korea was annexed, and international armed forces fought on our soil some 70 years ago. This was an impoverished nation only 50 years ago. Today, we stand tall and proud among some of the most advanced countries in the world, well respected in economics, politics and culture. 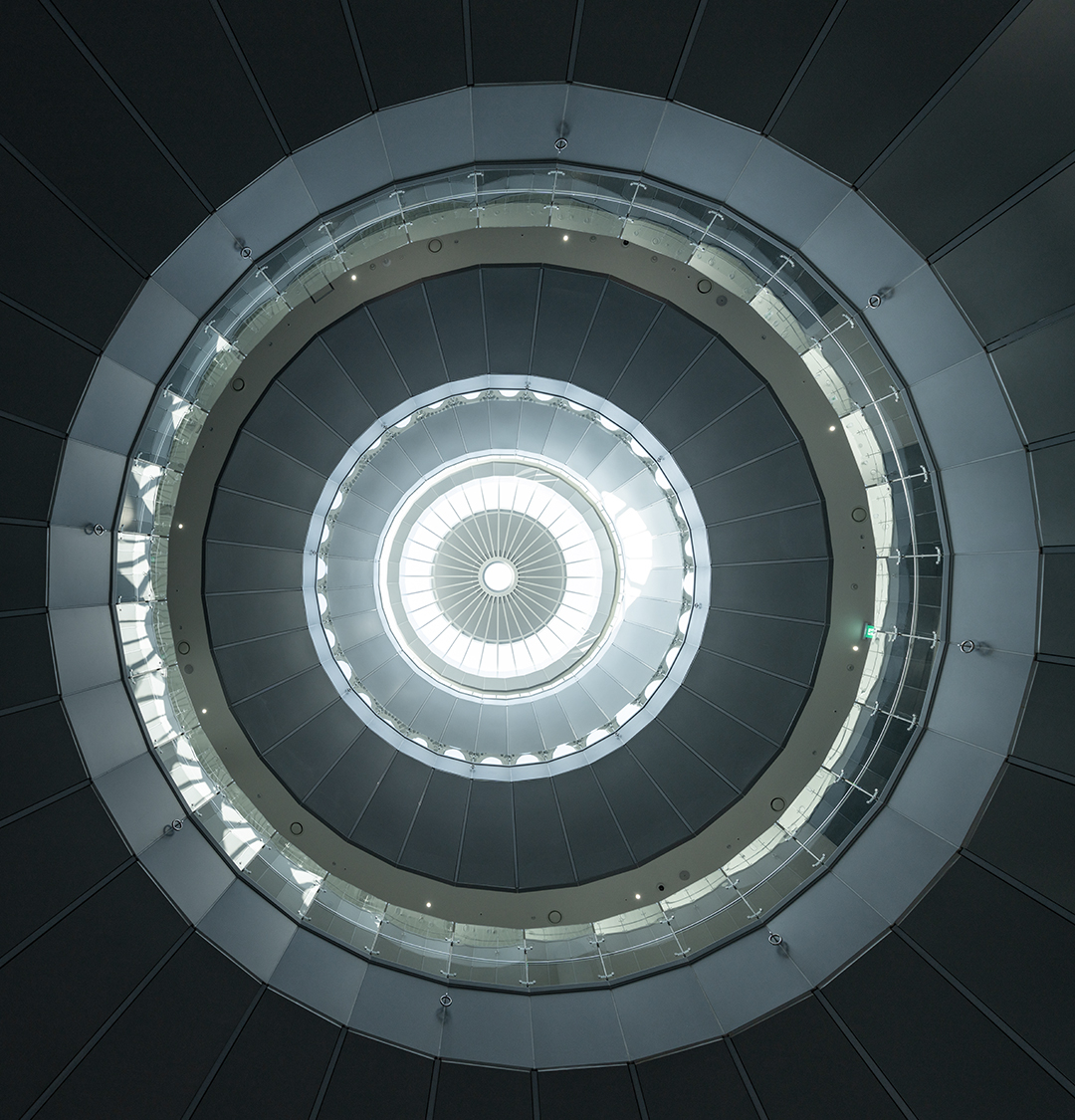 And this is no exaggeration. K-pop’s international surge is one thing. Just look at the number of international travelers arriving at Incheon International Airport and their review of Korea’s main gateway. The airport, which opened in March 2001, is the fifth busiest airport in the world in terms of annual international passenger traffic, and it handles the third largest cargo volume (numbers as of 2019). There are more impressive achievements in terms of quality, as Incheon has topped the Airport Service Quality ranking by the Airports Council International for 12 straight years. Korea is also No. 6 in air cargo volume and No. 12 in aircraft manufacturing, and has been elected to the board of the International Civil Aviation Organization for seven consecutive years. 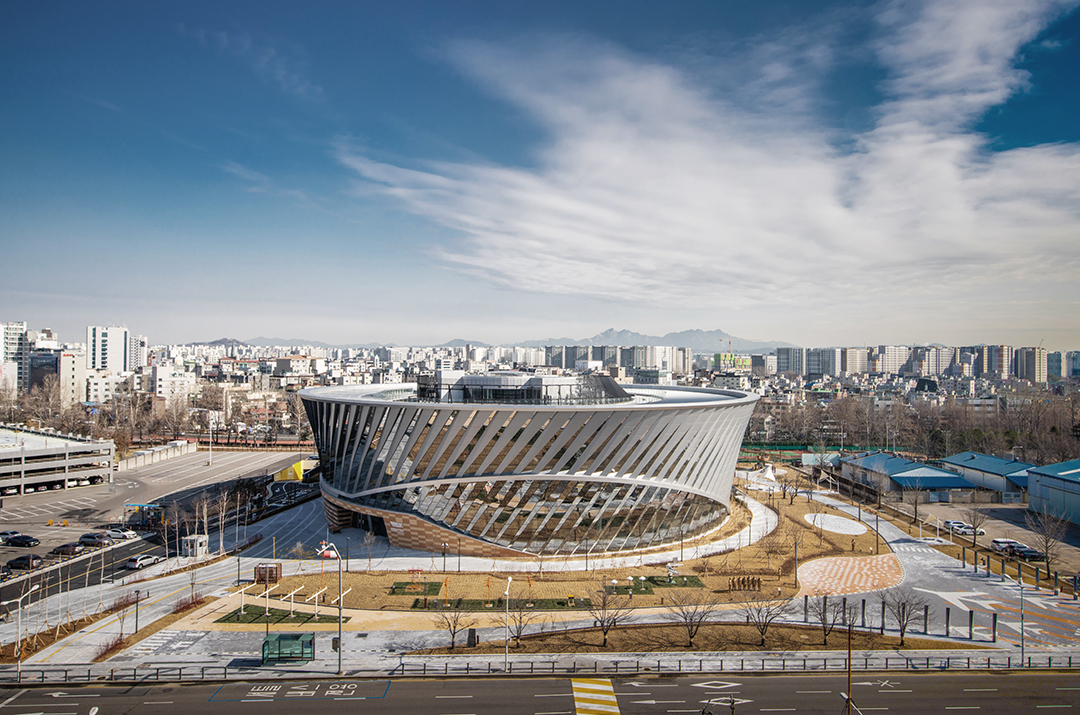 We need to take the next step from here, and this is where the National Aviation Museum of Korea comes in. It was built to help us understand where we’re coming from and where we stand in our aviation culture and industry, and to help nurture human resources that will lead the industry for the future. The museum was six years in the making. Unfortunately, the opening ceremony had to be tone down because of the pandemic, and not much work has been done in promoting the museum to the wider public. As of spring of 2021, only those who book their visits online are allowed to enter, and in limited numbers at that. The museum only admits 100 visitors per slot, for six slots each day. And the few who make it in get to enjoy certain benefits. For one, professional pilots are on hand to offer guide. Hearing directly from people working in the industry and learning about the history of aviation in the country makes for a fun visit. 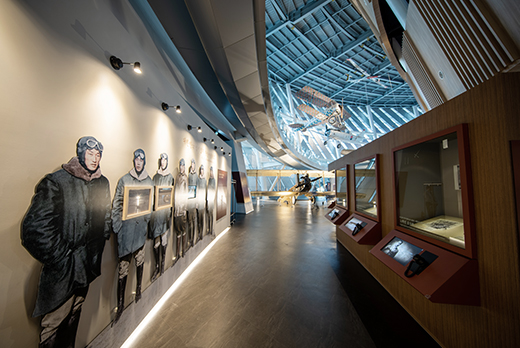 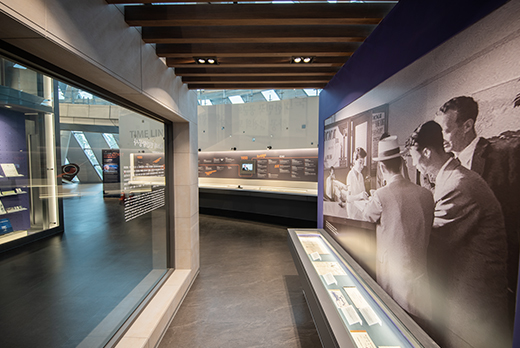 Aviation History Hall, with exhibits on independence movement and the Korean Aviation School under the provisional government

Aviation in Korea Starts with Independence Movement
The exterior of the three-story museum was inspired by an aircraft engine. As you enter the first floor, you’ll see the sign ‘History of Aviation,’ along with the introduction on the first Korean pilot, An Chang-nam. At age 16, An fell in love with flying after watching an American aerobatics performance in Seoul, and decided he, too, wanted to become a pilot. Three years later, An took flying courses at a Tokyo aviation school. Then in May 1921, An finished tied for first in the civil flying exam in Japan to earn his license. Back in the 1920s, flying seemed like a far-fetched dream. In light of the March 1 Independence Movement in 1919, brutally suppressed by Japan, having a Korean pilot flying high in the sky was a major sense of national pride.
An was a rock star in his days. There was even a fundraising campaign to help An buy a plane. With people’s donations, An was able to fly the plane named Kumgang, a remodeled Nieuport biplane from England, above Seoul. On Dec. 10, 1922, Kumgang took off from Yeouido, flew past Namsan and circled above Changdeokgung before returning. Seoul had a population of 300,000, and some 50,000 people were believed to have taken to streets to watch An’s flight. An could have led a comfortable life, but he fled to China in 1924. He wanted to join a group of fellow independence fighters in Shanghai and dedicate himself to the liberation of his country. But in 1930, An was killed in a plane crash during a flight lesson. He was only 29.
The visit to the National Aviation Museum of Korea starts with the story of An, our first pilot and a proud independence fighter, for it is also the beginning of the history of aviation in Korea. You will also get to see the replica of Kumgang. 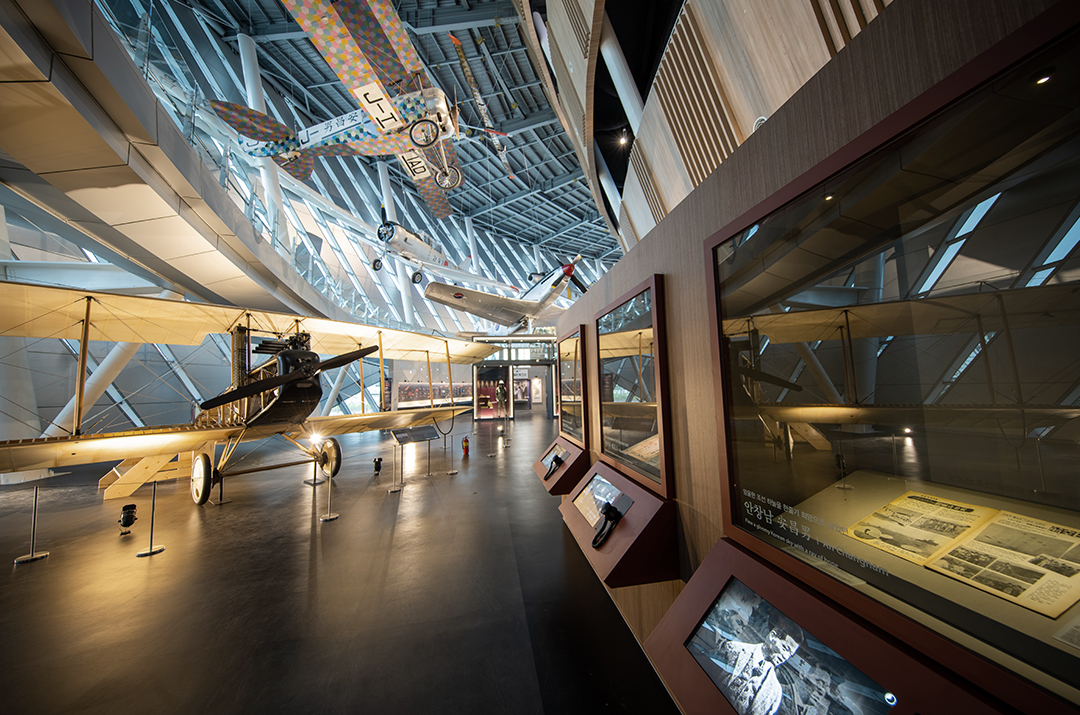 Inside ‘History of Aviation in Korea’ room at Aviation History Hall

From History to Industry, Joy to Poignancy
Once you get past the solemn air at the entrance, you’ll find yourself in a room full of exhibits and materials on the history of international aviation. Included are Leonardo da Vinci’s sketches of Flying Machines, incredible vehicles that never came to materialize; hot air balloons (1783) by the Montgolfier brothers, who took cues from a floating paper bag filled with hydrogen; Henri Giffard’s airship (1852) that could be steered; and Zeppelin (1900), the 128-meter long airship popularized by the rock band Led Zeppelin. The fact English aeronautical engineer George Cayley (1773~1857) discovered the four forces (weight, lift, drag and thrust) and laid conceptual foundation for air flying vehicles is quite fascinating, even to grown-ups. 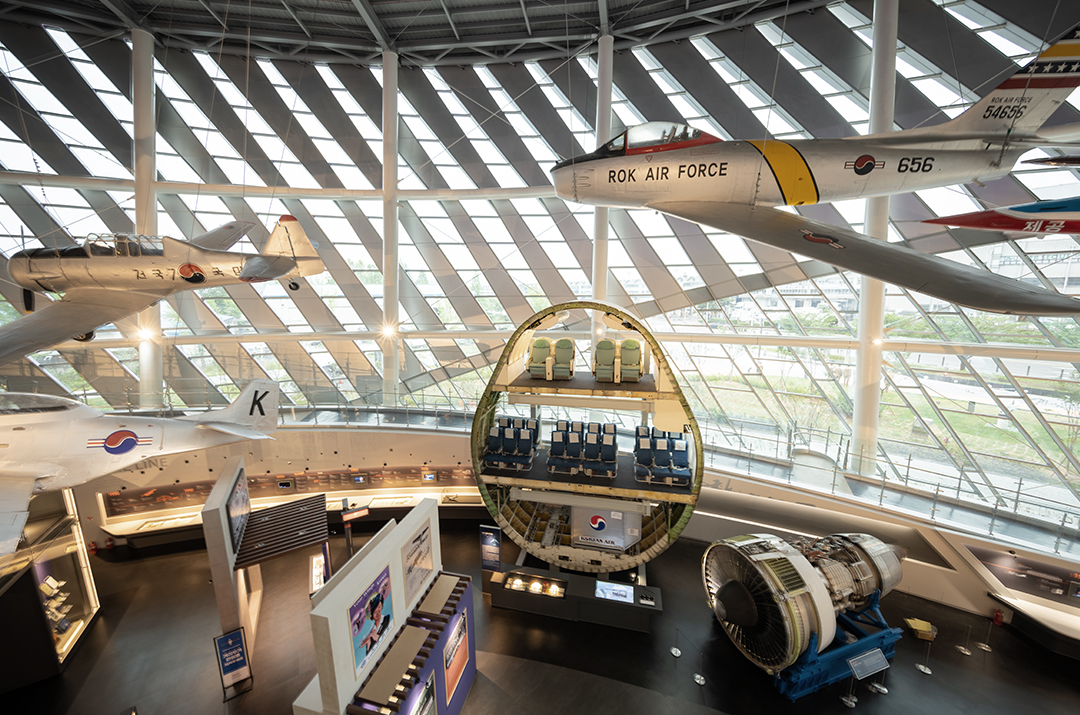 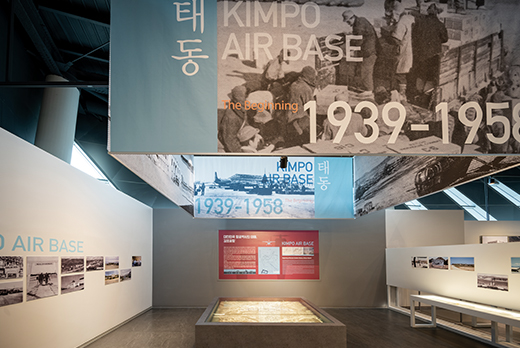 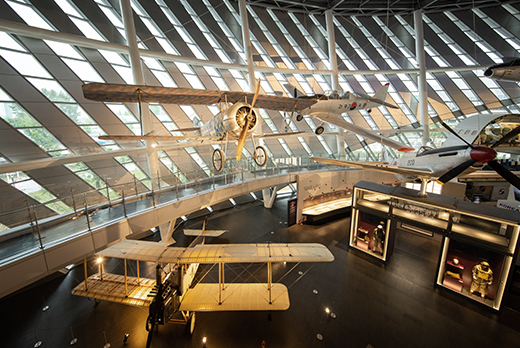 Replicas of airplanes help make it easier for visitors to understand the history of aviation in Korea. 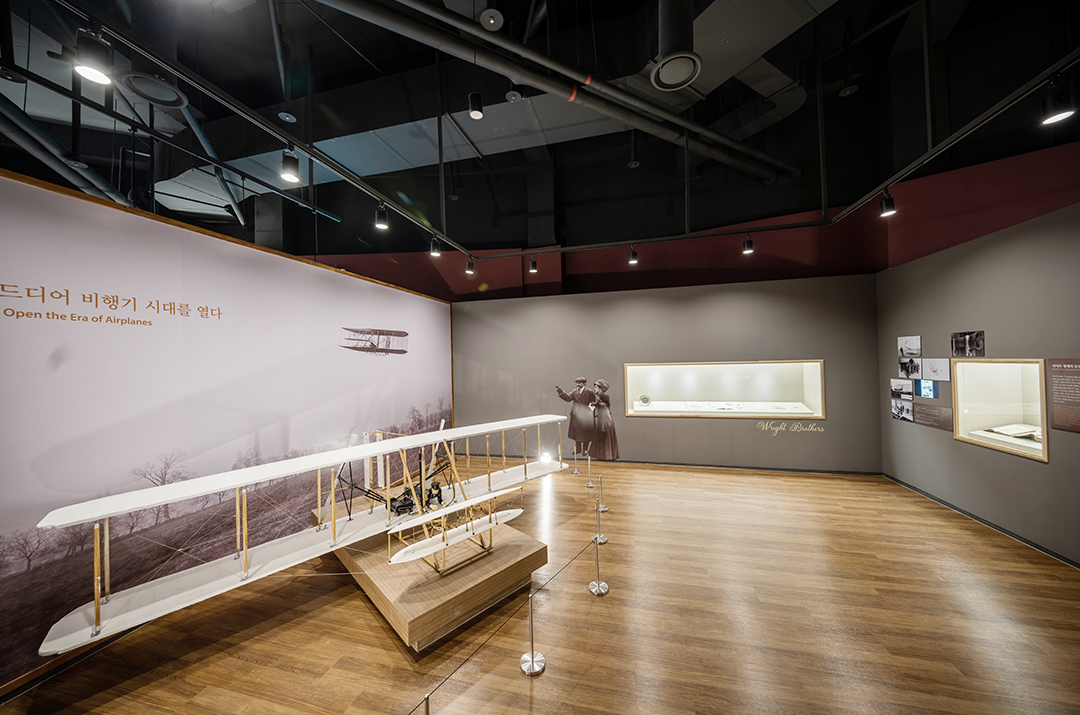 Inside ‘History of International Aviation’ room at Aviation History Hall

The aerial war in the early days of World War I was quite different from what we see today, in that the assistant pilot (and the designated shooter) fired pistol at enemy aircraft. During the war, the aviation industry improved by leaps and bounds. Machine guns and propeller synchronizers were developed, and the engine power kept increasing. In post-war years, planes that had been produced during the conflict were used to carry mail and cargo, among other civilian purposes. Following Charles Lindbergh’s transatlantic flight, the development of aircraft that could hold more fuel and fly farther gained momentum. In 1935, the groundbreaking DC-3 took its first flight. It could fly a long distance while carrying a large number of passengers. It was the first aircraft that could be profitable as a passenger plane. After covering such a fascinating history of aviation, it’s time to move on to a new room. 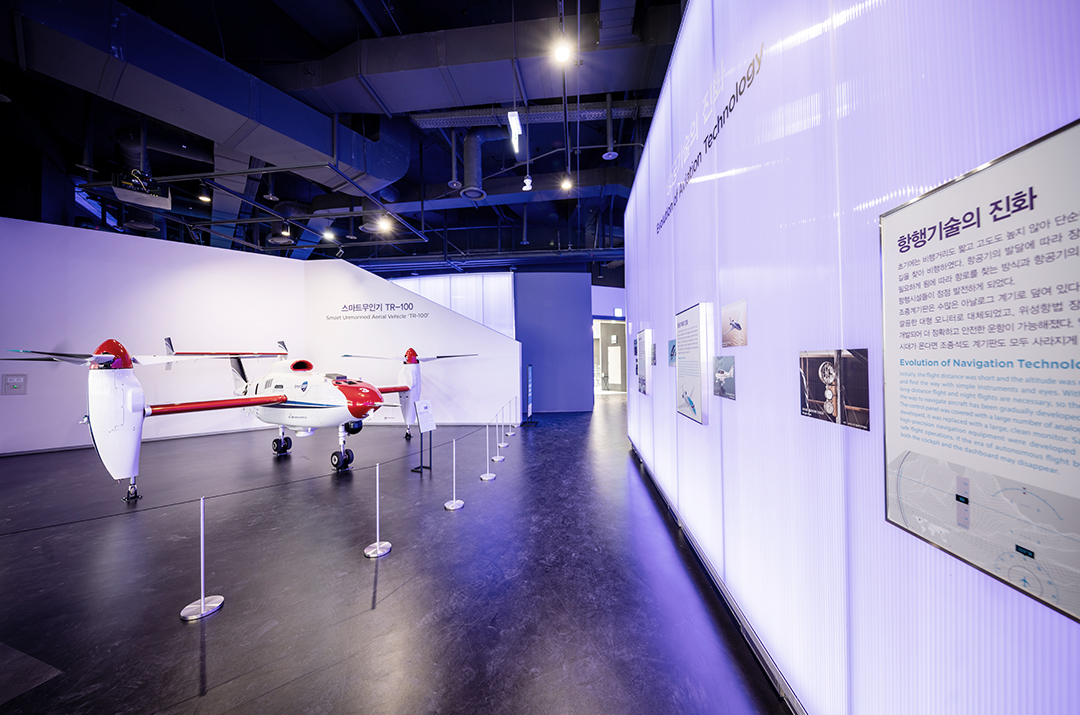 Aviation technologies that will change our lives in the future

From Korean Aviation School to Unmanned Aircraft
It is a space dedicated to the history of aviation in Korea. Much like the rest of the world, Korea first used aircraft for warfare. Even before our liberation, during the days of the provisional government, we took an interest in flying. The museum’s opening day, July 5, 2020, is also the centennial of the opening of the Korean Aviation School. Recognizing the importance of flying, Gen. Roh Baek-rin, the first secretary-general of the Army for the Provisional Government, tried to open an aviation school. While in California, Roh met Kim Chong-lim, who had immigrated to the United States in 1906 and worked in railway construction, before starting rice farming in California. As the price of crops soared during World War I, Kim became so rich that he began to be called the ‘rice king.’ Kim offered land in Willows, California, and donated $20,000 to set up the flying school. Graduates of this school went on to fight for Korea’s independence in the air. The National Aviation Museum of Korea exhibits bronze statues for those independence fighters: Roh Baek-rin, Oh Rim-ha, Lee Yong-seon, Lee Cho, Han Jang-ho, Lee Yong-keun and Jang Byeong-ho. 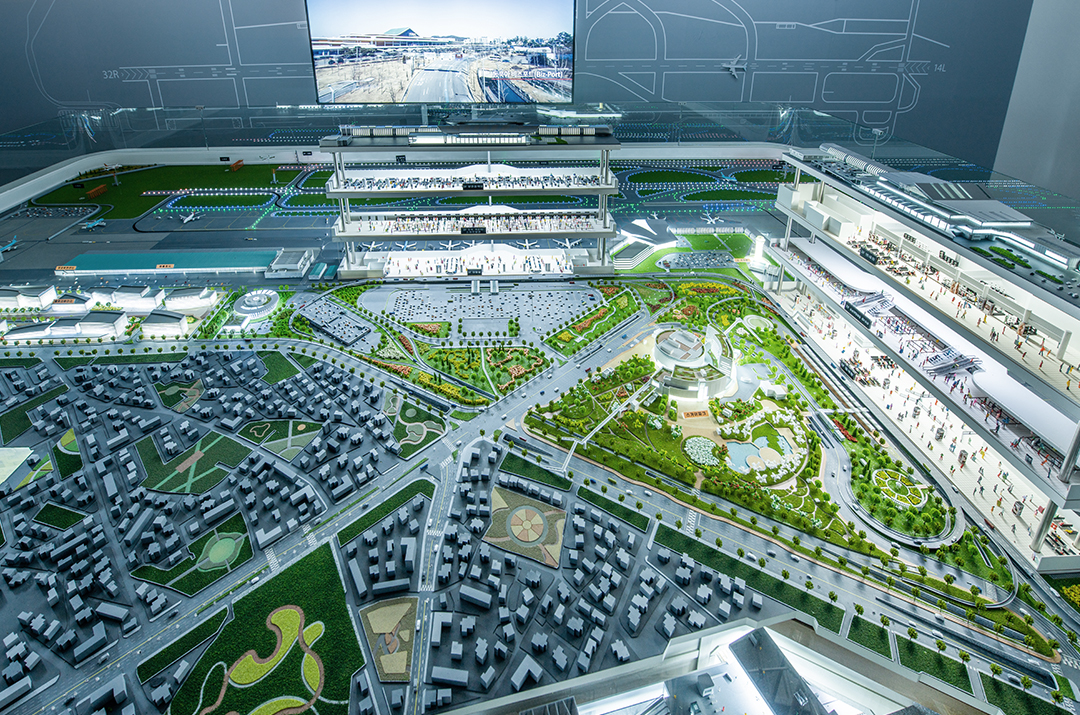 Aviation started to be industrialized in the years that followed. The sudden uptick in construction demand in the Middle East placed aircraft, airport and aviation technologies to transport construction workers and materials at a premium. The museum will lead you to the second floor exhibits covering the aviation industry. This space paints the picture of the current state of the industry in Korea. There were decidedly humble beginnings, with our independence fighters scrambling to find the home for the Provisional Government in China and opening an aviation school all the way across the Pacific. But all that work has paid off. We went from relying on a tiny airport at Yeouido to building connections with the rest of the world thanks to Gimpo International Airport. Today, Incheon International Airport is one of the largest airports in the world.
The second floor focuses on the impressive progress our aviation industry has made to get to where we are today: boasting the airport that has topped the Airport Service Quality ranking for a dozen years running and becoming the 12th country to develop supersonic aircraft, and then becoming the sixth nation to export indigenous supersonic aircraft. Studying the history of the industry and then learning how far it has come will fill you with a sense of pride. The hall will offer you a glimpse into the future, including different types of unmanned aircraft. 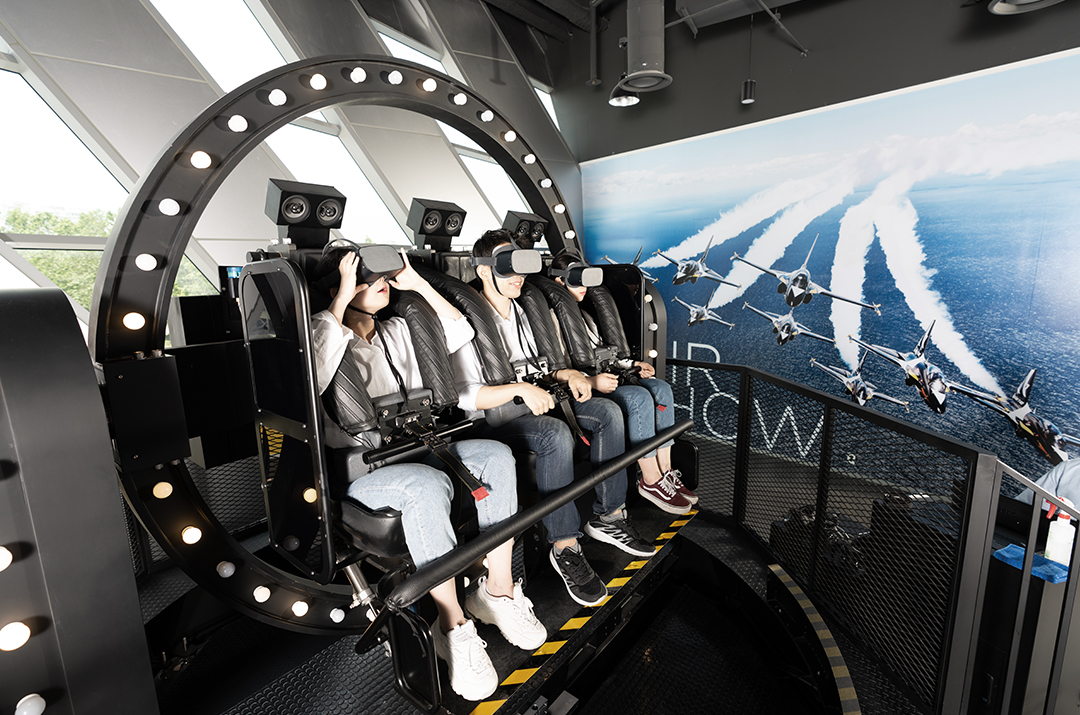 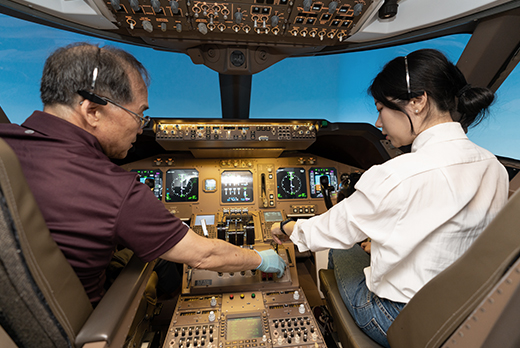 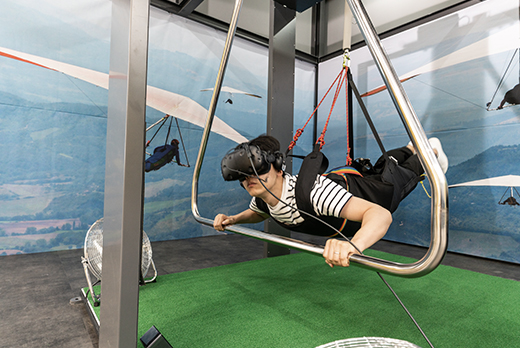 The third floor features Boeing 747 flight simulators, available after online reservation, and you can also put on VR headsets to pull off your own aerobatic moves at an Air Force air show. The replica of the control tower at Incheon International Airport will let you experience what it’s like to be working as an air traffic controller. You’ll be charged fees to use these features but they’re absolutely worth the money.
Former pilots or flight attends come in every 30 minutes as docents, and we recommend you sign up for their guidance. The National Aviation Museum is full of fun features. And the sheer joy of seeing aircraft and studying aviation history leads to a sense of pride, which in turn fuels the drive for an even better future. The museum has such a natural flow, taking visitors from the early history to industrialization of the present to technologies of the future. It takes rigorous quarantine efforts to ensure health and safety of its visitors, and does a great job of providing information on restrictions in place. In sum, the National Aviation Museum is a fun place to take your children.