Green Haven in City Center, Sejong National Arboretum
After nine years of planning and construction. the Sejong National Arboretum recently opened, presenting about 2,900 species of plants. The entire arboretum is set up like a theme park for people of all ages and gender as it features an expansive greenhouse, art exhibition, bonsai garden, and playground.
Sejong City is familiar to us as the “administrative capital” of Korea. If you ever felt that the city would have not much to do in terms of cultural activities or tourism, you’ve just got a reason to go. Last October, the Sejong National Arboretum finally wrapped up the construction which took close to a decade and opened its doors to the public. It is a national arboretum operated by the Korea Institute of Arboretum Management affiliated with the Korea Forest Service. Created for the government supervision of plants by climatic zones and vegetation belts, the Sejong location is the second national arboretum following the National Baekdudaegan Arboretum opened in 2018 for the purpose of research, preservation, and exhibition of flora found in the Baekdudaegan mountain range. There are a total of three national arboretums including the Korea National Arboretum situated in Pocheon, Gyeonggi Province.
The Sejong National Arboretum, due to its location in the central part of Korea, is tasked with a systematic management of plants native to the central region, while on a smaller scale, its location in the city center has given it the role of promoting the garden culture and setting an example of ‘arboretum as an urban garden.’ That means the place is full of things to see, as well as educational programs offering hands-on experiences of the garden culture. We took the tram operating for visitors to the arboretum to tour the extensive 650,000㎡ area, which is the combined size of 90 soccer fields. There are about 20 exhibition centers and 2,900 species of vegetation in the Sejong National Arboretum. If you feel a whole day is not enough time to look around the premises, what would be must-see places? 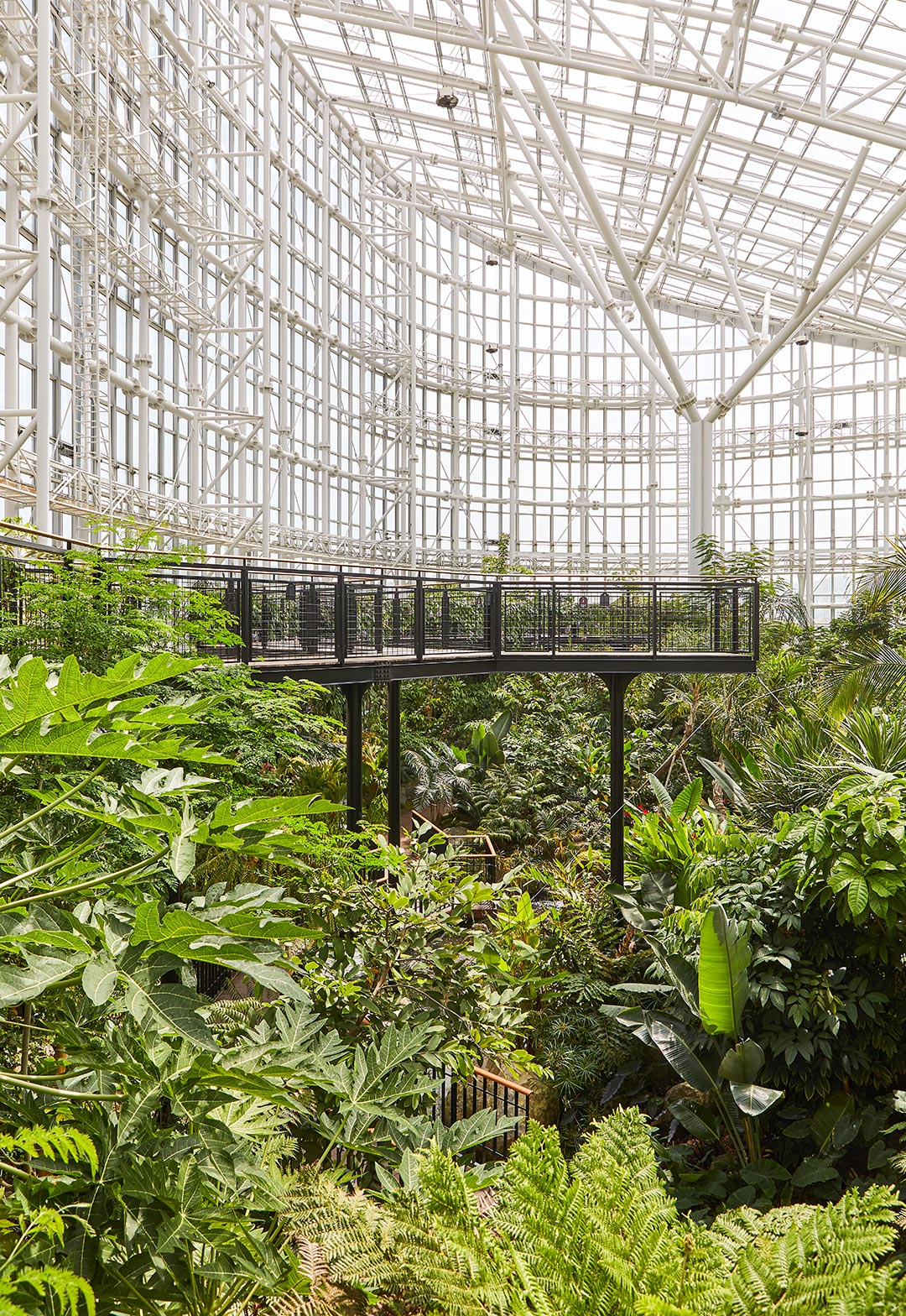 Iris-Shape Glass Structure, Four Seasons Exhibition Greenhouse
The most eye-catching facility in the Sejong National Arboretum is the Four Seasons Exhibition Greenhouse. Besides being gigantic, the sunlight reflected on the glass walls draws your attention even from a distance. Comprising the Mediterranean, Tropical, and Special Exhibition greenhouses, the main attraction of the arboretum offers a cafe and a small exhibition room in the center of the structure. Its architectural design represents petals of irises, which is a monocotyledonous plant. Each of the petals is dedicated to one theme, only with slightly varying heights and sizes.
The Mediterranean Greenhouse has the highest ceiling. Standing 32m tall, it has the greatest height among greenhouses in Korea. There is an observation deck from which you can get a bird’s eye view of the entire arboretum. Created with the motif of the Alhambra palace in Granada, Spain. The Mediterranean Greenhouse has a photo zone, featuring a long, narrow pond inspired by the one in the Palacio de Generalife, one of the most popular sites in the Alhambra. 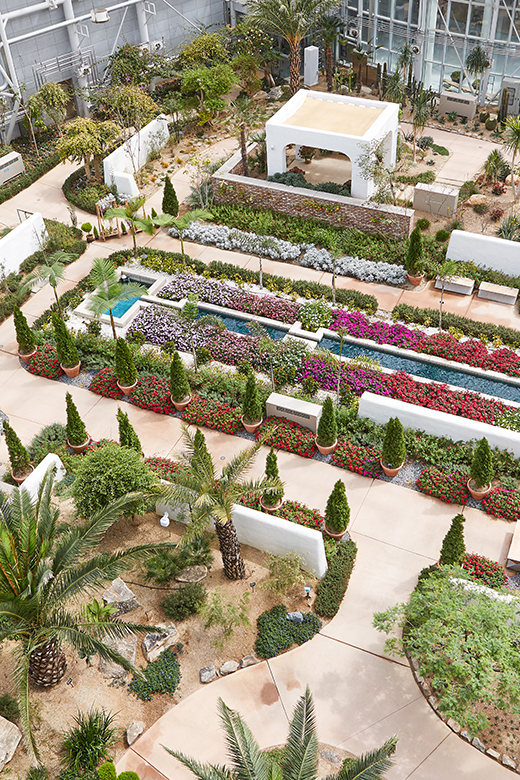 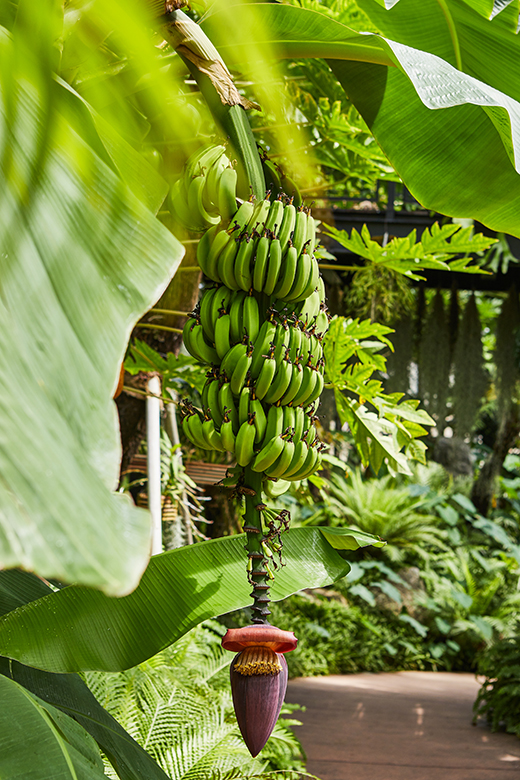 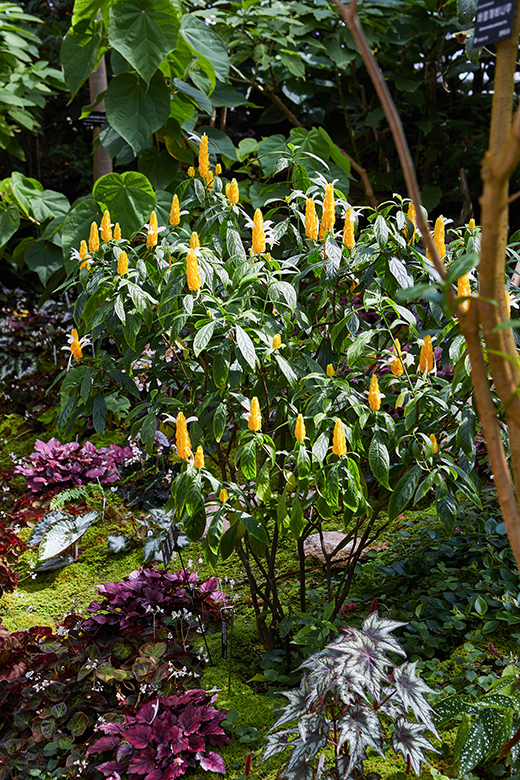 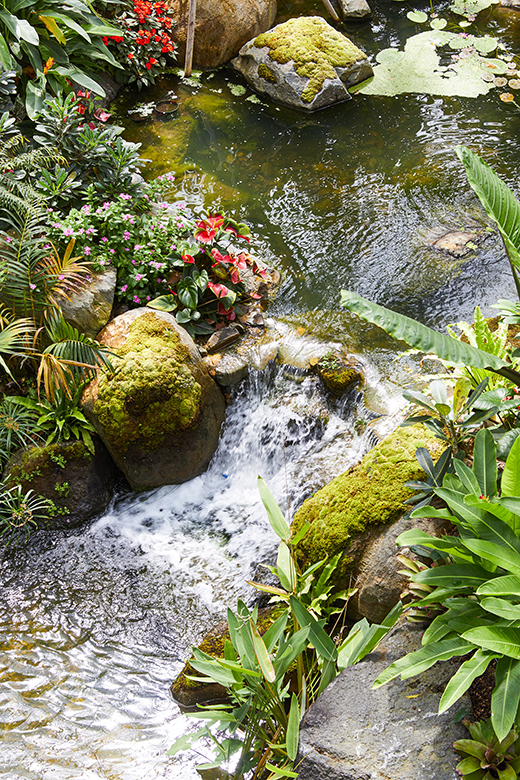 The Tropical Greenhouse, filled with warm, humid air, presents about 400 species of plants from the tropical region with a monthly average temperature of 18℃ or higher. Various species of palm trees including triangle palm and bottle palm, and rubber trees occupy the space, along with carnivorous plants and tropical fruit trees such as banana trees and papaya trees. Fitting for the vibrant energy of this space, the photo zone is in front of the pond covered with Victoria water lilies and a miniature cave falls. It is also fun to stand on the two-story-high bridge and look at the plants from up high. 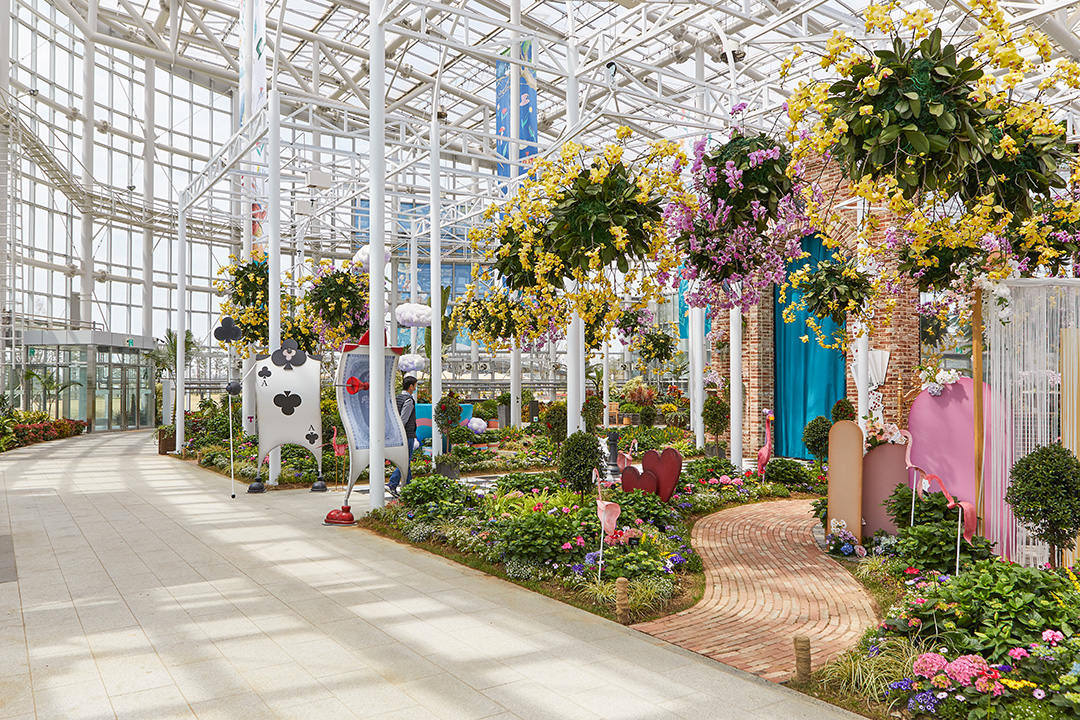 The most kaleidoscopic greenhouse is the Special Exhibition Greenhouse. As the name says, the place is where special exhibitions are held. The Sejong National Arboretum holds various exhibitions and events across the premises including the Special Exhibition Greenhouse with a theme each season. This spring, a festival of spring flowers opened on the theme of ‘Our Flowery Story’ for a two-month period from April to June. The Special Exhibition Arboretum used the motif of < Alice in Wonderland > to present ‘Once Upon a Springtime.’ Flowers hanging from the ceiling and a huge trump soldier, and the decorations make you feel like you are truly in the wonderland and will see a busy rabbit carrying a pocket watch popping out any minute. 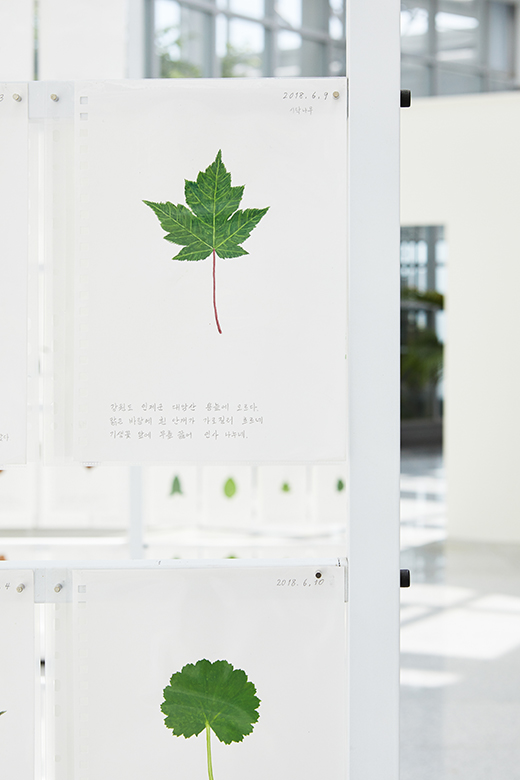 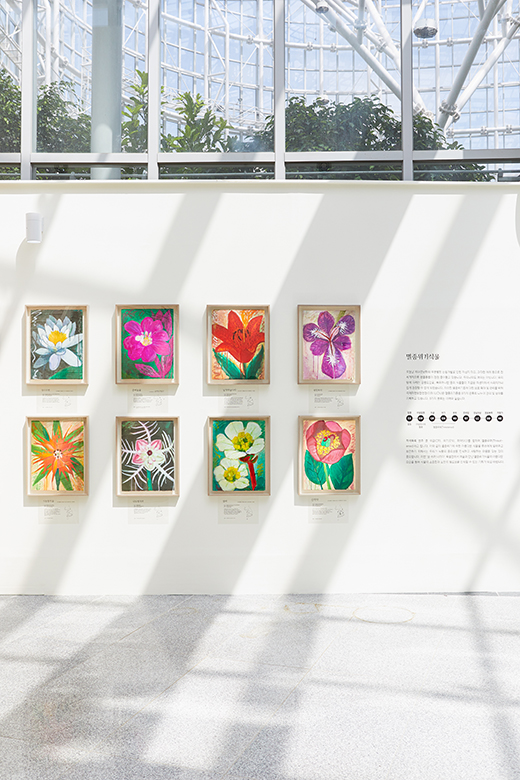 Exhibition room in the center hall at the Four Seasons Exhibition

In the small exhibition room in the center hall, < Coming up for Air > is an exhibition you don’t want to miss. The ‘Leaf Diary Series’ featuring over 700 leaf gouache paintings each telling a story, black-and-white charcoal drawings, and strong, and vivid acrylic paintings depicting endangered plants have such distinctive charms that it is hard to imagine one artist created all those works. The acrylic animal paintings are available as postcards, a great souvenir from the arboretum.
Due to the Covid-19 social-distancing guidelines, the number of visitors per hour is limited for the Four Seasons Exhibition Greenhouse, which is an indoor facility, so an advanced booking is necessary if you plan to visit. 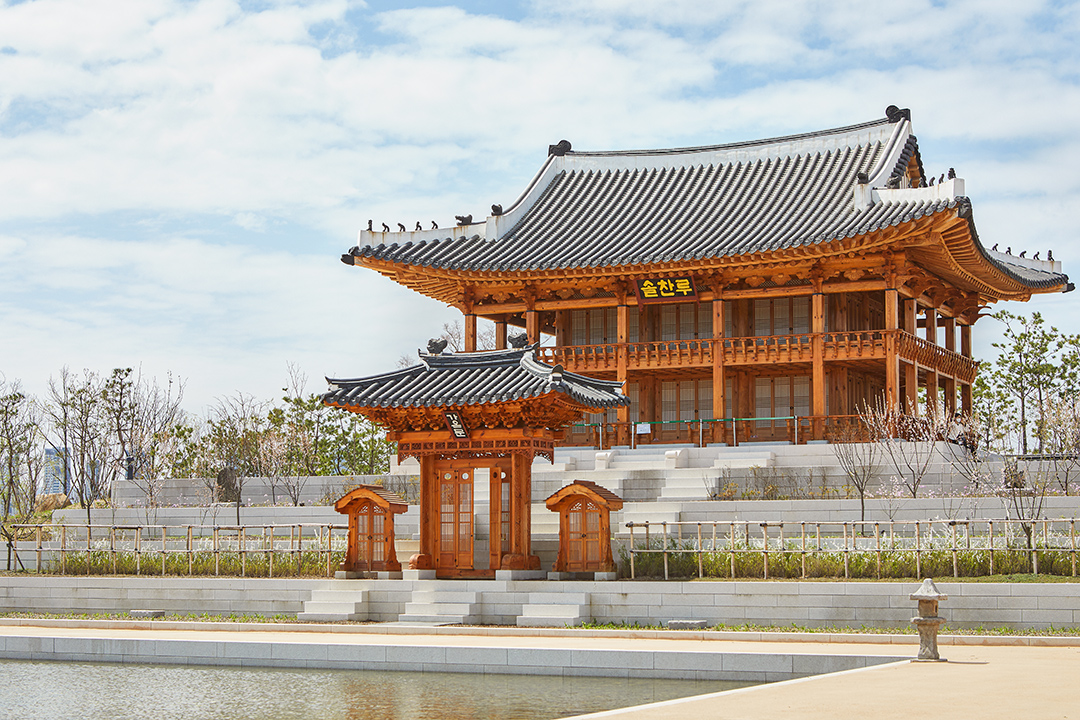 The Palace Garden at the Korean Traditional Garden 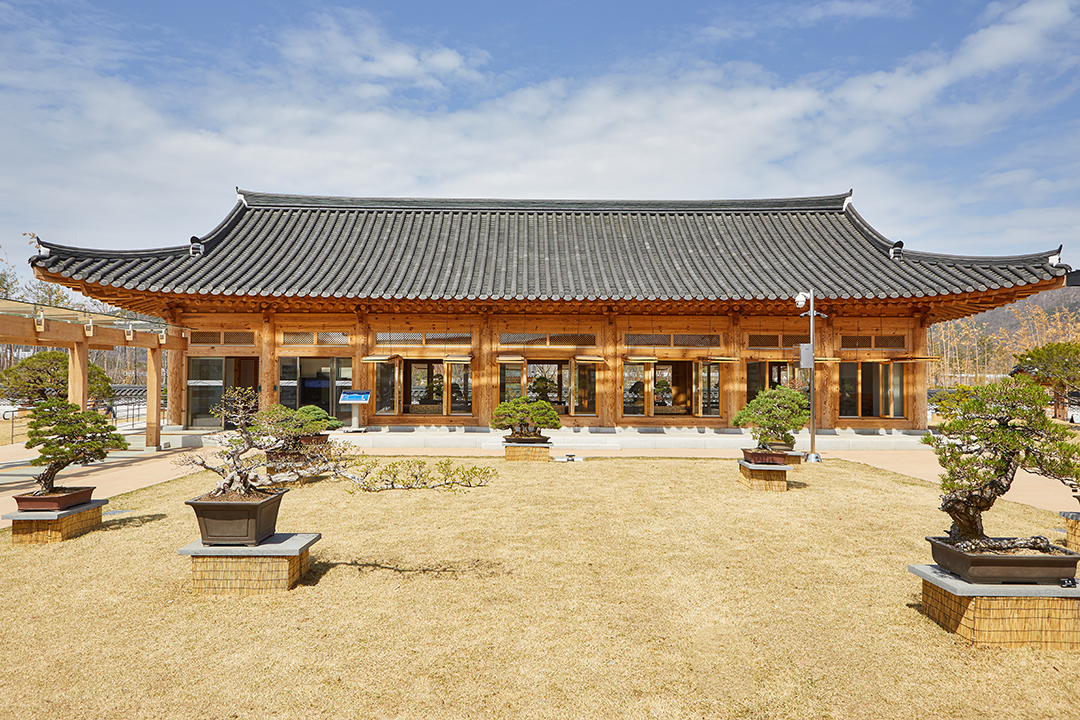 The Buyong pond, Juhapru, and even vegetation around the garden seem to have been transported from Changdeokgung. The re-make of Juhapru is called ‘Solchanru,’ a Korean name meaning green and sturdy like a pine tree. The Hermitage Garden where scholars from the yangban aristocracy would relax or enjoy the arts is a re-creation of Gwangpunggak of Soswaewon and its surrounding landscape in Damyang. To build two architectural features representing the traditional Korean garden, a pavilion and a building, Korean Red Pine was used with the same measurements as the original structures. There is no boundary between nature and the garden in the Korean Traditional Garden. Whether it’s sunny or breezy, it would be a memorable moment if you try to take a deep breath and bask in the moment. 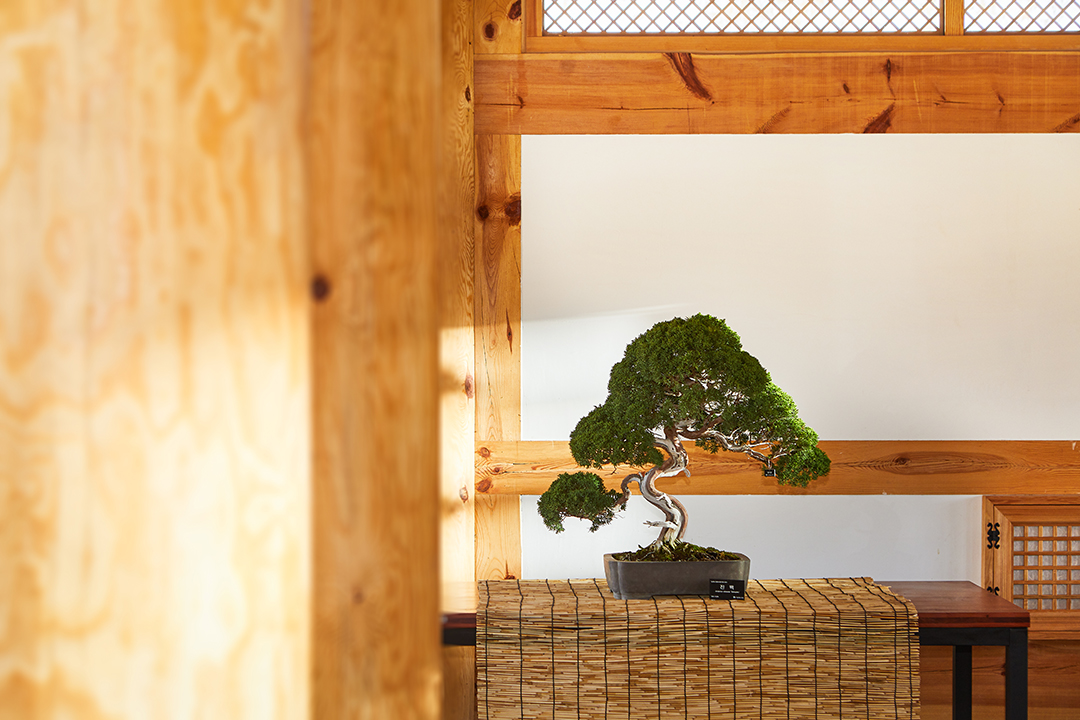 The Bonsai Garden presents a collection of bonsai that are evaluated as artworks. The Sejong National Arboretum owns over 400 bonsai of various forms such as songbaek bonsai involving pines and conifers, sanghwa ‘flower’ bonsai, sanggwa ‘fruit’ bonsai, and sangyeop ‘leaf’ bonsai. The Bonsai Garden changes its display of bonsai according to seasonal themes among the outdoor garden, permanent exhibition center, and special exhibition center. Bonsai is not just a horticultural technique of growing a plant in a container, nor is it for the growing of plants and the admiration of their beauty. A potted plant carries a natural aura. The shapes of the roots, trunks, and boughs and the texture of leaves all contribute to the bonsai-style expression of natural aesthetics. 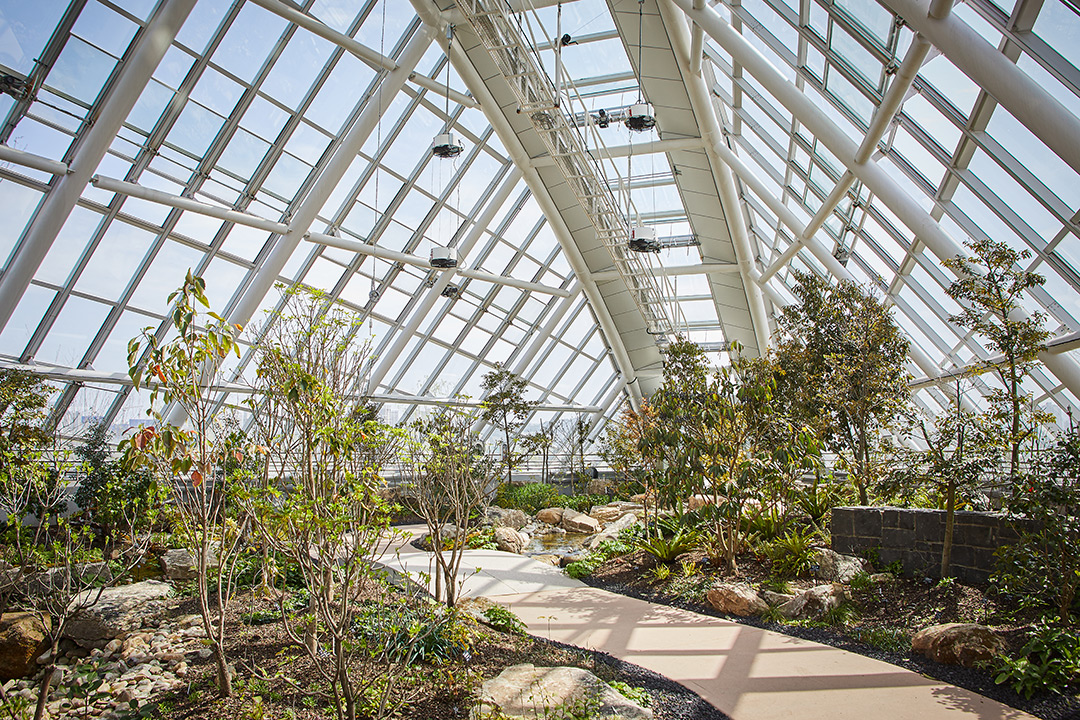 The Bonsai Garden has two major hanok buildings with a modern design twist. The Bonsai Permanent Exhibition Center is a greenhouse built on a wooden framework but with lots of windows, and the Special Exhibition Center with a tiled roof. With plenty of sunlight brightening the indoor spaces, bonsai placed in the hanoks look extra special. There are bonsai programs available here as well. Behind the Bonsai Garden is the Rare and Specialty Plants Exhibition Greenhouse, introducing rare flora unique to Korea and decreasing rapidly in number even from natural habitats. You can meet some strange yet familiar plants here such as white daphne which grows at the foot of a mountain in the coastal areas of Jeju Island and Korean prickly thistle which is native to Bogildo Island in South Jeolla Province. 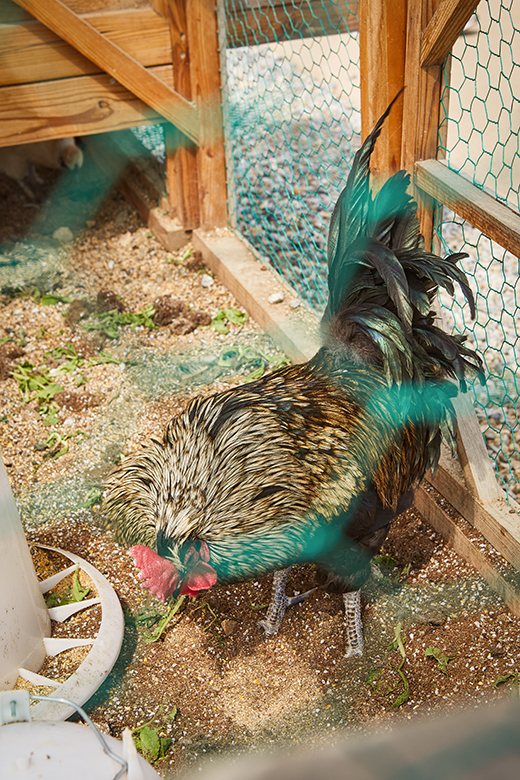 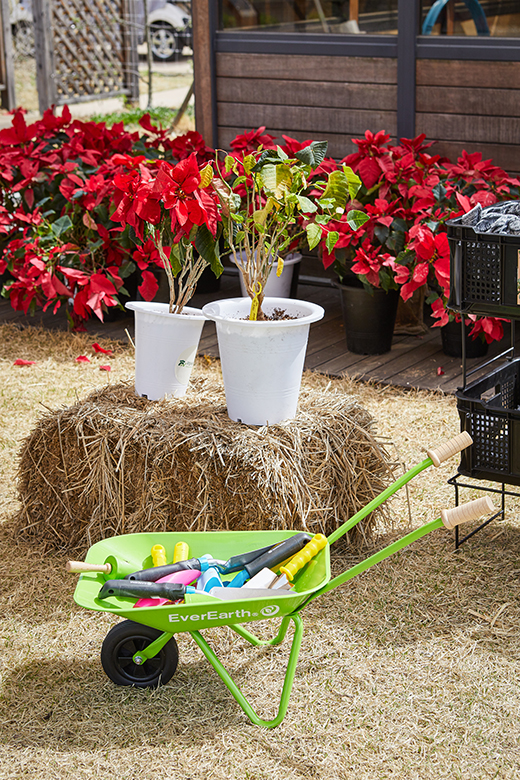 Experiencing Garden Culture at Life Garden and Children’s Garden
Walking around the arboretum, you may find yourself wanting to give plants a try. In fact, there are activities through which suggestions are made in regards to plants you can grow, across the arboretum. The Life Garden shows our garden culture found in daily life and has edible vegetation. The garden has vegetable seeds or seedlings planted and you can participate in the cultivation and harvest processes. Blueberries are the most popular. This June will be the first time they will have fruits at the Sejong National Arboretum. The droppings of chickens living in the mobile coop in the center of the arboretum are used as the organic fertilizer for the garden vegetation. It’s a perfect location for a children's experience center where they can see diverse crops and animals. 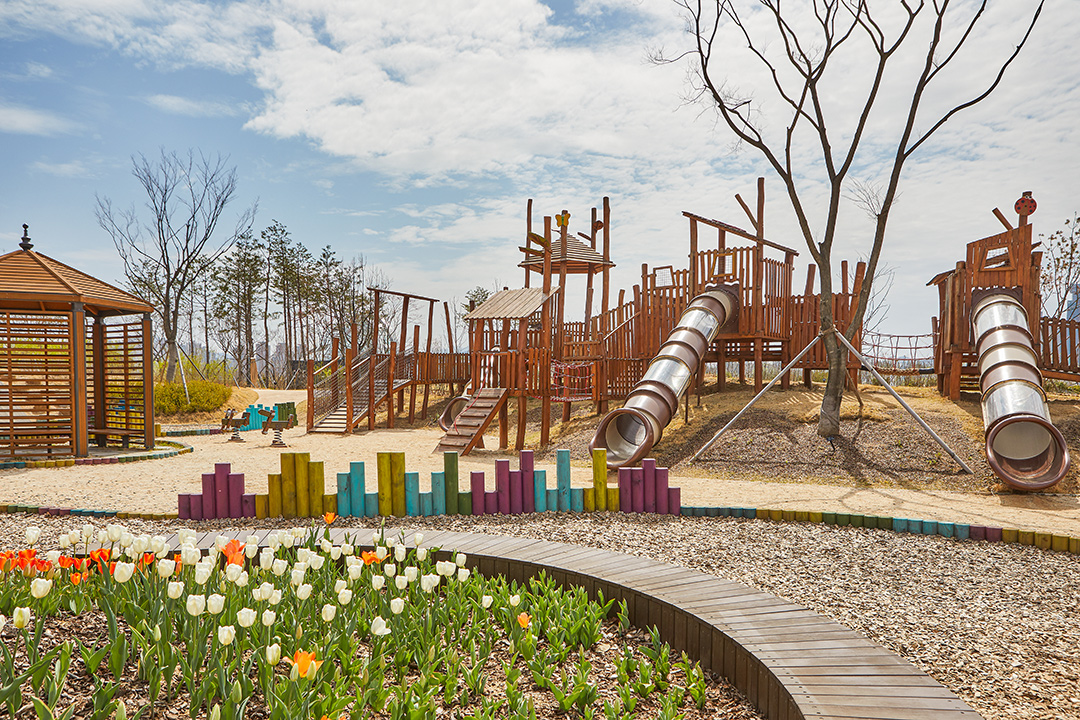 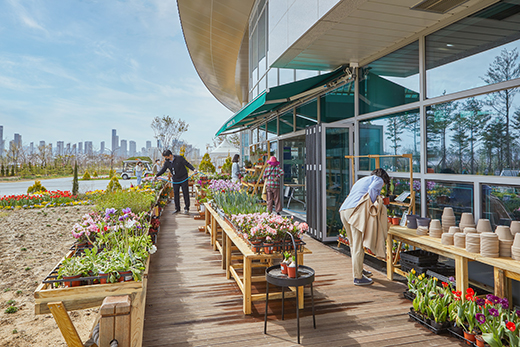 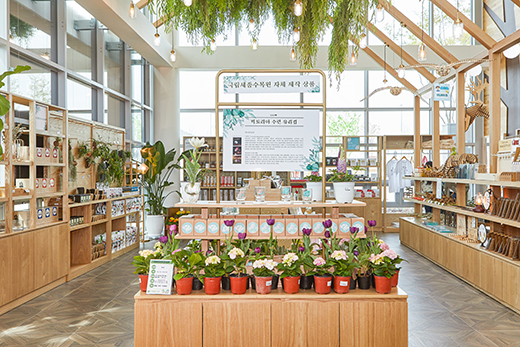 Gardening shop inside the Visitor Center

In addition, the Children’s Garden is a must-see for families with children as there are wooden rides and a maze. The Sejong National Arboretum offers the ‘Upcycle Gardening Program’ which is providing plants to participants for free when they are replaced due to a change in the exhibition theme. Plants that have been on display for longer than 3 months are available for this shared initiative, which also includes instructions on how to change pots and manage the plant. You can book the event on the homepage and go to the Life Garden to attend.  Check out more diverse programs for children and adults on the homepage as well. If you are interested in having a companion plant, you may want to stop by the garden shop on the first floor of the Visitor Center and look around for flower plants and trees. 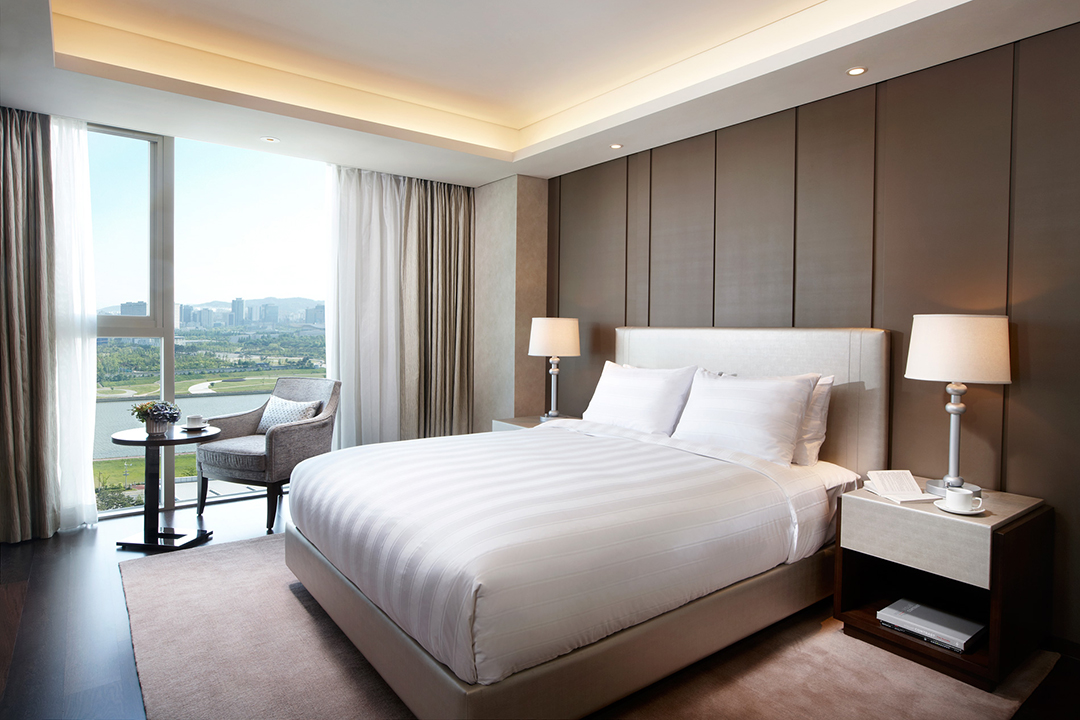