Another Reason to Visit Busan: Coastal Train
A railway travels along the coastline between Haeundae Beach and dense pine groves, offering a stunning coastal scenery throughout the entire route. Hop on the Haeundae Beach Train to take in the history and nature of Busan.
History of Scenic Donghae Nambu Line
The Donghae Nambu Line, a railway that connects Busanjin to Gyeongju via Ulsan, was constructed in 1935 during Japan’s colonial rule. It began as a train track along Korea’s southeastern side to transport passengers and freight. Those who wanted to travel from Busan to Gyeongju or from Gyeongju to Haeundae for a day trip will take the Donghae Nambu Line. Japanese living in Pohang or Gyeongju would take the train to go to Haeundae Beach whenever they could.
Tradesmen used to transport Gijang chives, which are still famous, to Dongnae Station via railway, ajimaes working for restaurants in Donghae cooked pajeon, using the mix of Gijang chives and seafood. It’s the famous Dongnae pajeon of today. Behind the nationwide popularity of the seafood pajeon that originated in Busan is the small contribution made by the Donghae Nambu Line. 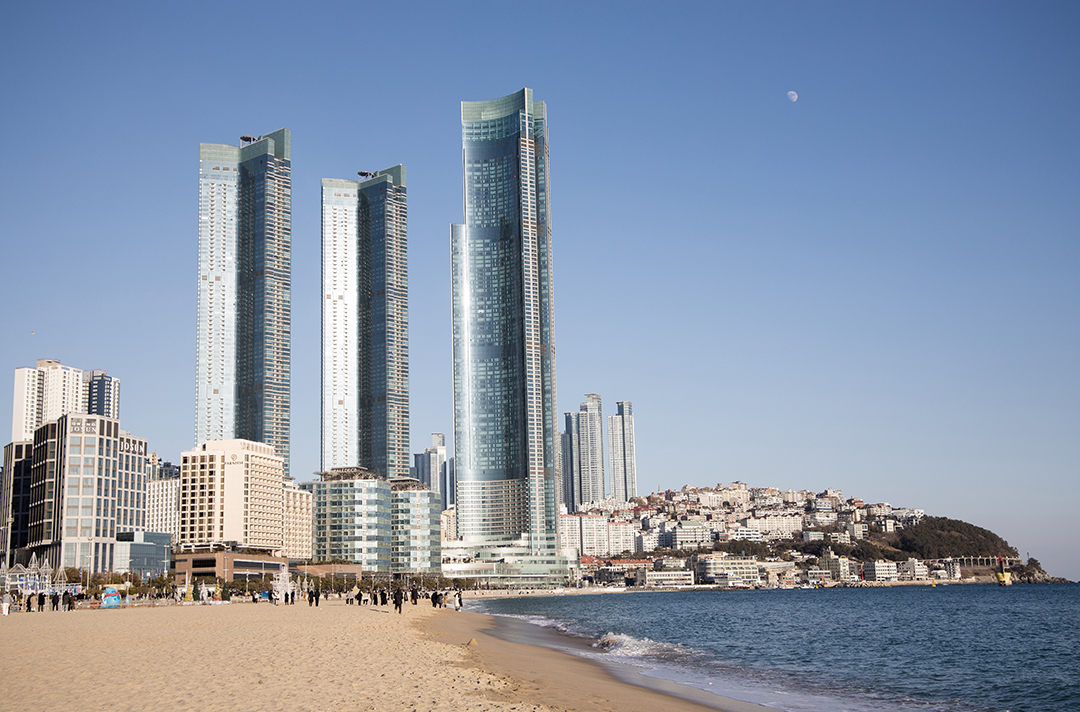 After liberation, despite the disadvantage of a narrow terrain on which the railroad was built, the Donghae Nambu Line continued operation for over 80 years and gave countless memories to Busan citizens. The line was closed after the decision was made to construct an electrified, double-tracked railway. After the rail service ended in 2013, the section between Mipo Station in Haeundae and Songjeong drew attention ironically as the most scenic part of the now-closed route. Deserting that section seemed to be such a waste.
The City of Busan built the Green Railway, a walking trail stretching 9.8km along the old railroad. It enabled people to enjoy the beautiful landscape created by the thick pine groves of eastern Busan as well as the view of the coastline and the sea. The Green Railway begins at the Olympic Intersections in Haeundae, instead of the actual train track. From the old Haeundae Station to East Busan Tourism Complex via Mipo was redeveloped into a promenade embracing both downtown Haeundae and the coast. Just like the High Line park of New York, an urban redevelopment that renovated an old freight rail into an elevated park, Busan’s historic railway was revived into a trail around Haeundae. 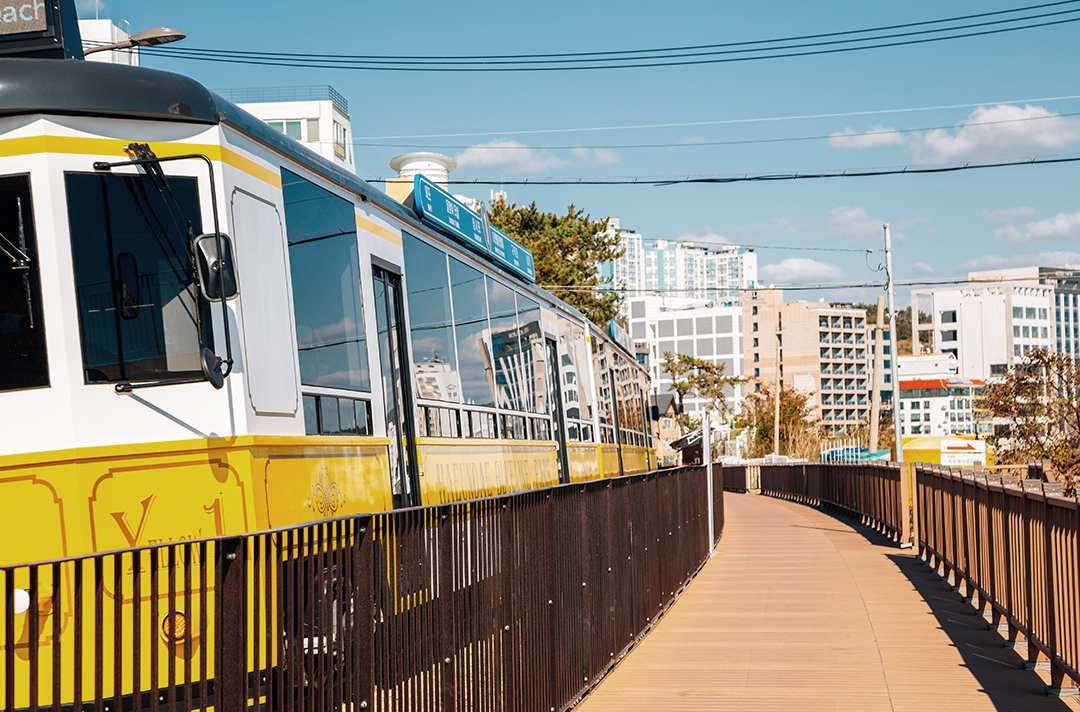 Train Ride Along Haeundae and Pine Grove
There was still room for improvement even after the trail was built. So the city had the private sector get involved to fix the old track and operate a beach train for tourism purposes. That was the beginning of Haeundae Blueline Park, a tourist facility in the Haeundae Special Tourist Zone.
There are two services at Haeundae Blueline Park--Haeundae Beach Train and Haeundae Sky Capsule. The Haeundae Beach Train runs 4.8km from Haeundae Mipo Station to Songjeong via Cheongsapo. There are a total of six stops in this route. Departing from Mipo Station(0.3km), the train passes Dalmaji Tunnel(0.8km) and heads to Cheongsapo stop(2.3km), Daritdol Skywalk stop(2.9km), and Gudeokpo stop(3.4km), finally arriving at Songjeong stop(4.8km). This route was once called ‘Sampo Coastal Street.’ Sampo refers to Haeundae Mipo, Cheongsapo, and Gudeokpo towns, encompassing areas of Mipo, Cheongsapo under Dalmajigogae Pass, and Gudeokpo where Songjeong Beach is located. 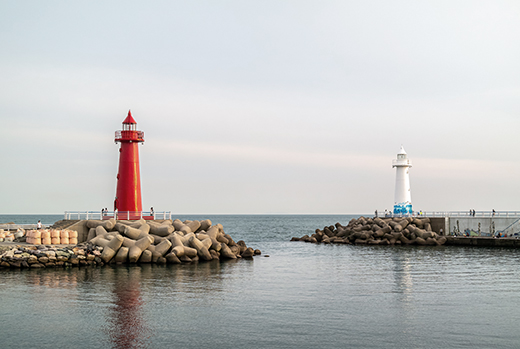 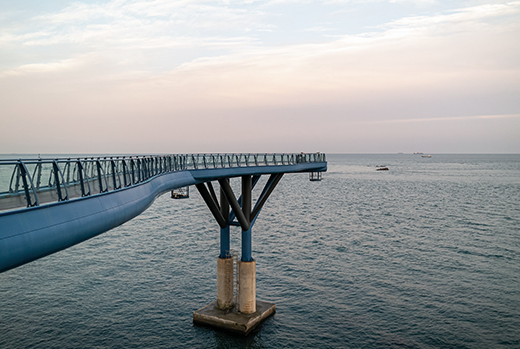 The train runs slow at 15km per hour. A one-way trip from start to finish will take 30 minutes. The slow speed is perfect for enjoying the ocean view. The interior of the train is optimized for that purpose, as the windows are large and the two-row seats face the ocean instead of the direction of the moving train. It means you can see the ocean anywhere you sit. It creates a cinema-like ambience in the car. Originally up to 100 passengers can fit into a car of the train, but due to social-distancing regulations, the number is down to 40-50 passengers. 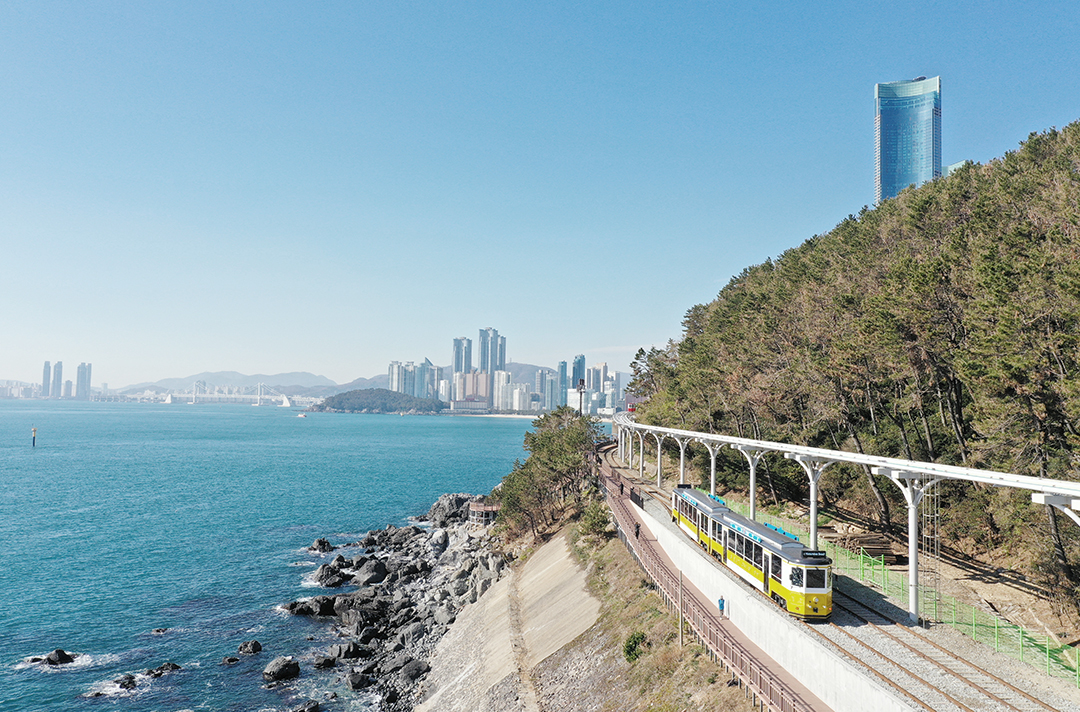 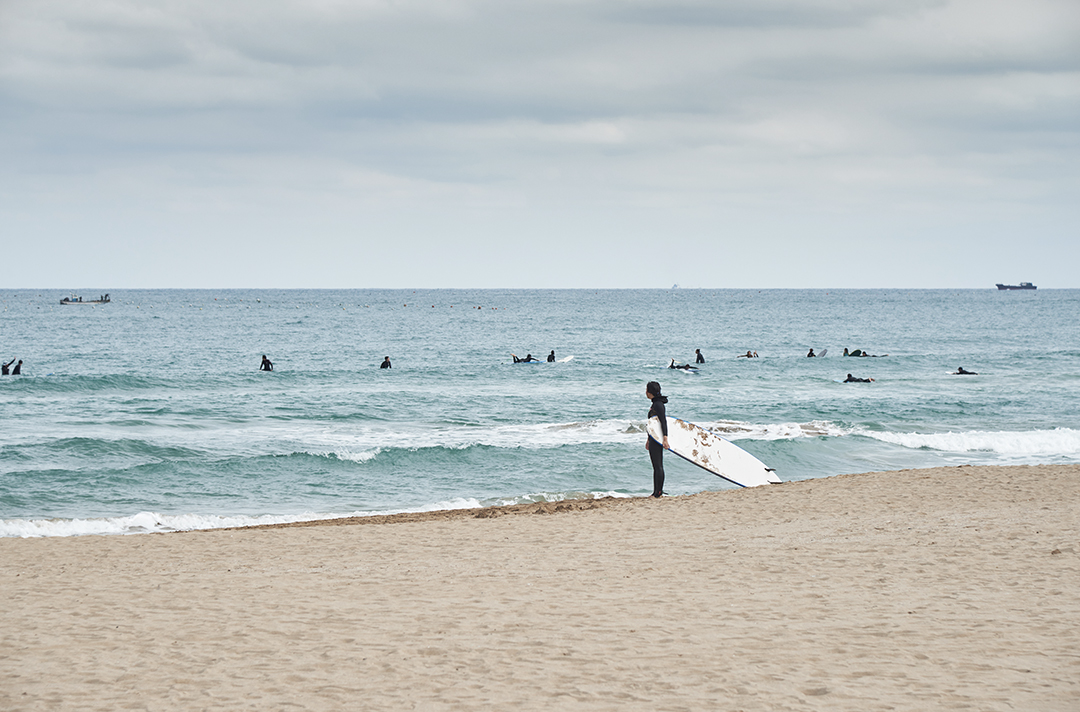 Of course the train ride offers varying views from section to section. At Mipo Station, a panoramic view of Haeundae’s iconic highrise LCT, Oryukdo Island, Gwangan Bridge, and Dongbaek Island unfolds before you. The wide, open view sometimes includes Daemado Island on a clear day. The trail along the pine grove leading to Dalmaji Tunnel is called ‘Moontan Road,’ a play on the word ‘suntan.’ The moonlight shining through the trees is truly breathtaking. Around the time the train passes Cheongsapo, you can hear the waves breaking on the pebbles on Mongdol Beach. It is a completely different sound from the one that can be heard on a sandy beach. Cheongsapo has two famous lighthouses painted in red and white, respectively. It’s always crowded with people taking photos, being a social media hot spot. Near Songjeong Station, you start noticing surfers riding the waves off Songjeong Beach. You are allowed to get on and off the train at every stop. 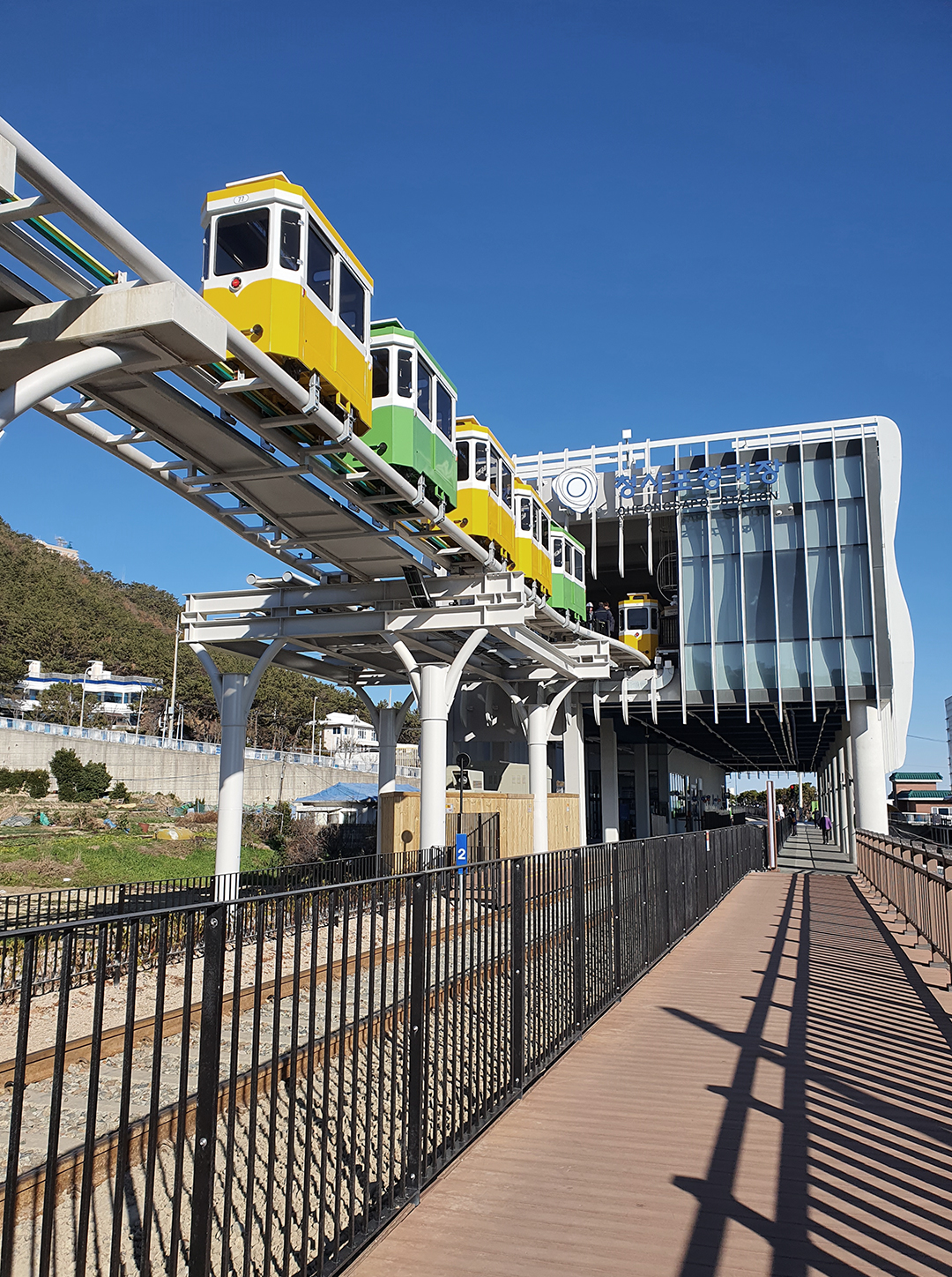 Quiet and Cozy Scenic Tour in Sky Capsule
At Haeundae Blueline Park, an aerial rail is built 7-10m above the Beach Train railway. It is where the colorful  Haeundae Sky Capsule, in green, blue, red, and yellow, operates on an automated system. The course is rather short at 2.3km from Mipo to Cheongsapo, and the capsule drives slowly at 4km per hour. For a quiet, more private tour of the Haeundae area, the miniature-like car only allows up to four passengers. It takes about 30 minutes one way. A recommended course for tourists is to take the capsule to Cheongsapo, walk along the Green Railway back to Mipo. It will ensure you get to feel the ocean and the forest of Haeundae with all five senses. 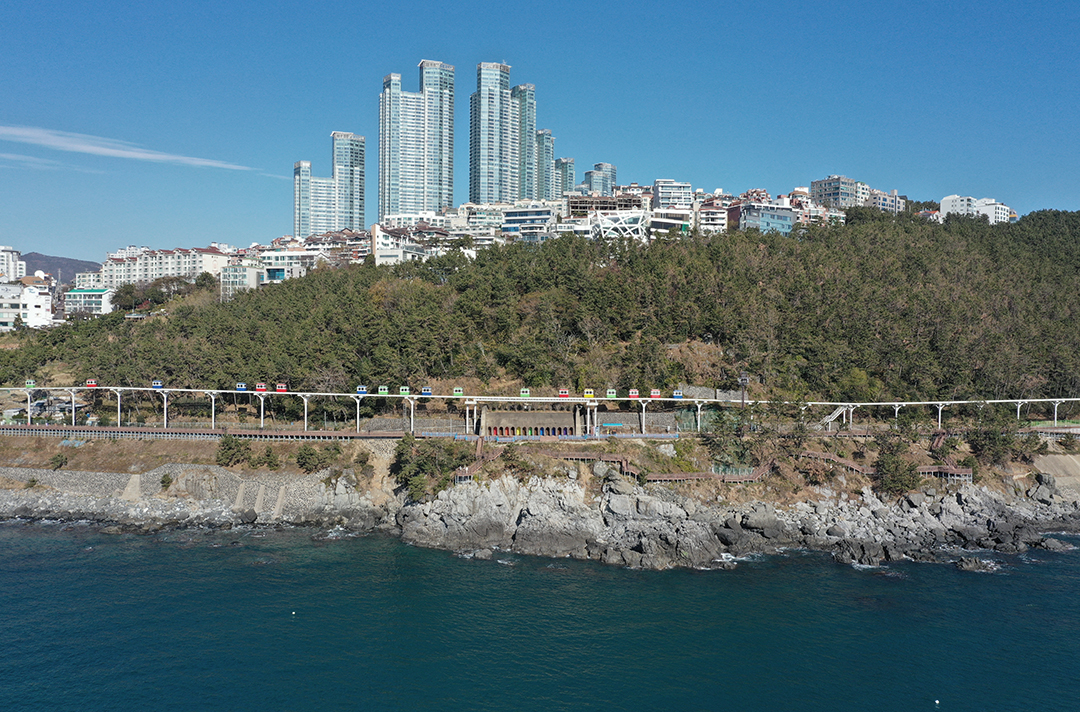 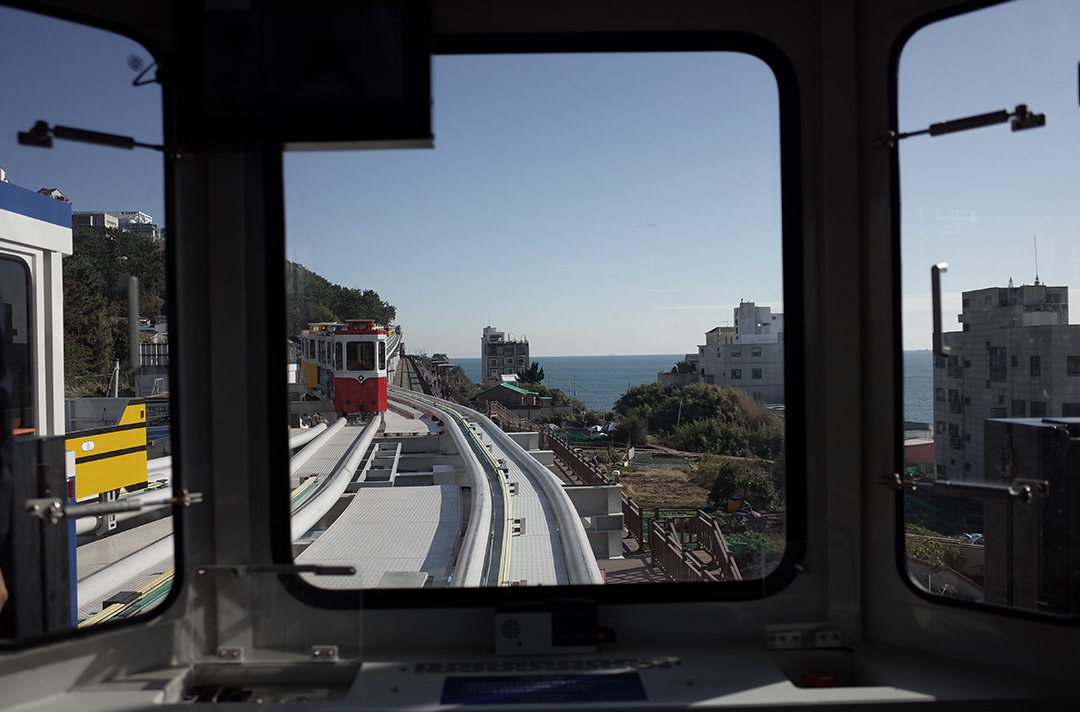 Walking from Cheongsapo toward Songjeong Beach, you arrive at Haewoljeong Pavilion. Designated as the diverging point between East Sea and South Sea in 2013, the pavilion is one of the best places to see the moon rise in Busan.
The Haeundae Beach Train costs 7,000 won per ride, 10,000 won for two rides, and 13,000 won for a day pass. A day pass allows you to get off any stop and take time to look around as you can take the next train. The Haeundae Sky Capsule costs 30,000 won for up to two passengers, 39,000 won for three, and 44,000 won for four for a one-way trip. You can ask for roundtrip tickets if you want. A package deal combining the Beach Train and Sky Capsule tickets is available as well. For the months of May and June, operating hours will be from 9:30AM to 7:30PM. 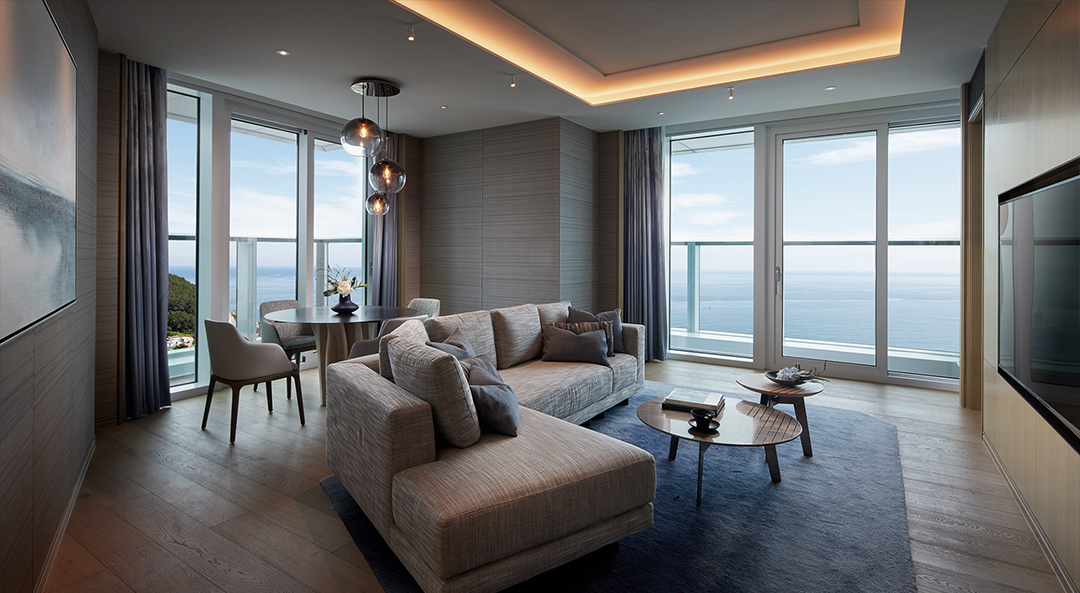 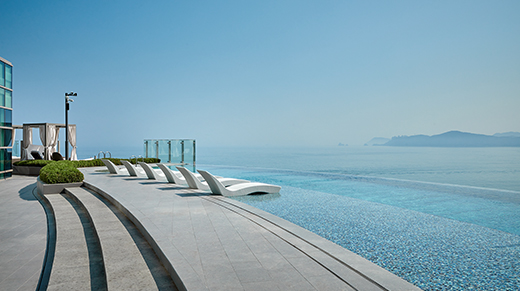 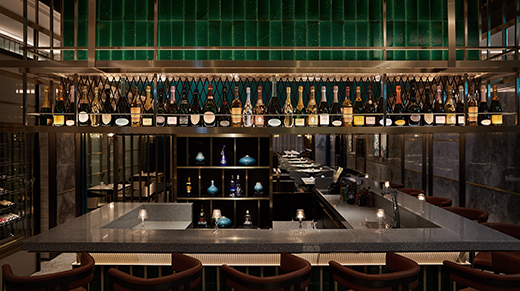