10 Beautiful Korean Architecture
The Korea Tourism Organization has recently selected 56 representative architectural works in Korea. We’ve narrowed it down to 10 locations that are great for travel right about now.
Buildings may be the most suitable travel destinations in this pandemic era as they hardly get affected by season or weather. Last year, the Korea Tourism Organization issued a guidebook introducing beautiful Korean architecture at a perfect time. From traditional Korean buildings to trendy, contemporary structures, a total of 56 architectural works are featured in the guidebook.

Jongmyo Shrine
Completion 1395
Location 157 Jongno, Jongno-gu, Seoul
Jongmyo is always mentioned together with the four palaces of Seoul, namely Gyeongbokgung, Changdeokgung, Changgyeonggung, and Deoksugung. In fact, however, it is not as well known as the big four, among tourists. Designated as World Heritage by UNESCO in 1995, Jongmyo is a shrine built for the ancestral tablets of Joseon kings and queens, and is one of the most refined and majestic buildings from the Joseon era. The shrine construction began in 1394, the year when King Taejo relocated the capital to Hanyang and ended the following year. Jeongjeon Hall which is 101m in length and Yeongnyeongjeon are the main structures of Jongmyo. Jeongjeon has 19 chambers(taesil) where a total of 49 memorial tablets, including those of 19 kings and 30 queens, are placed. 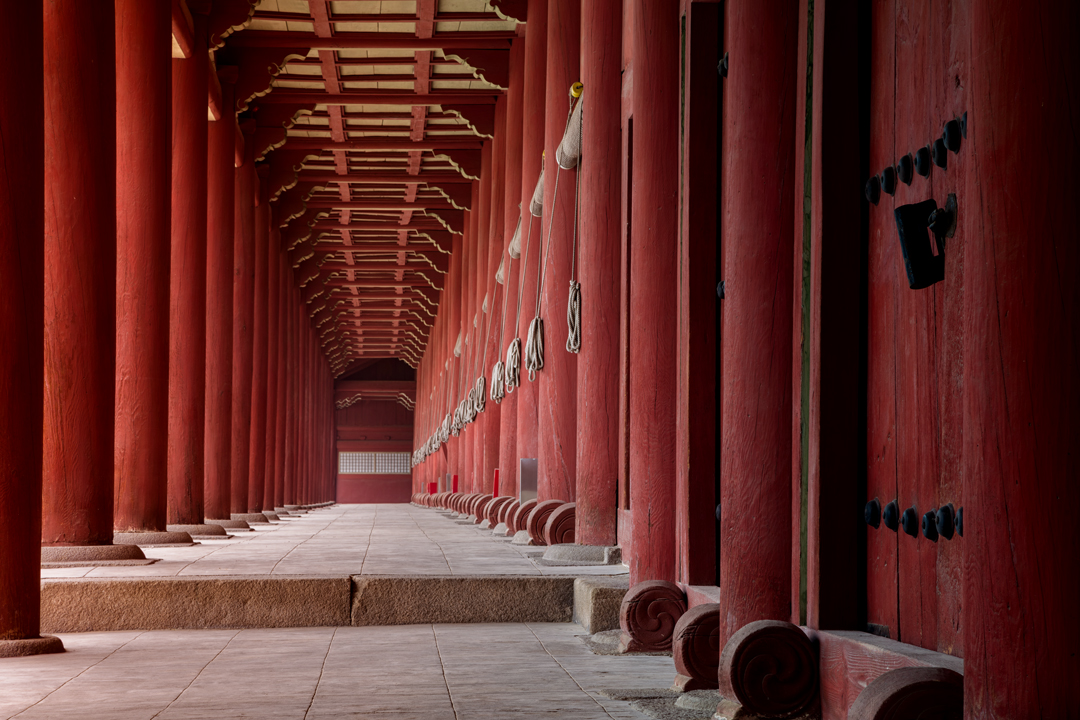 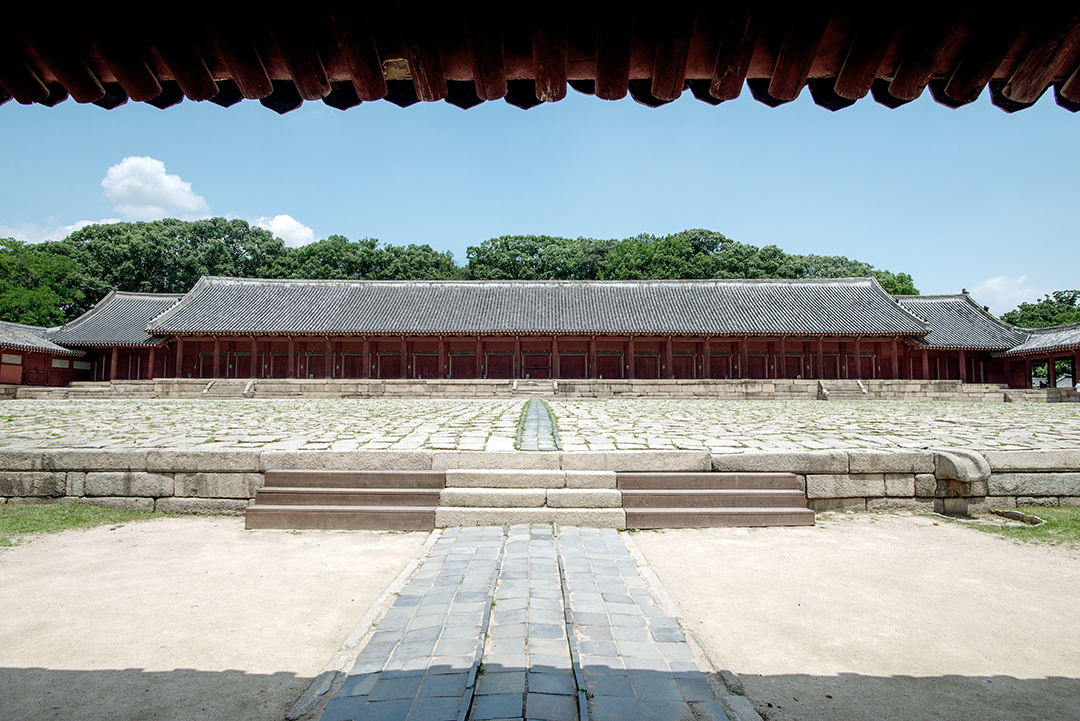 Lotte World Tower
Completion 2016
Design KPF
Location 300 Olympic-ro, Songpa-gu, Seoul
The soaring skyscraper has become the symbol of Seoul. With an elongated conical design stretching 555m, Lotte World Tower has 123 floors above ground and is currently the tallest building in Korea, It is the fifth tallest in the world. KPF(Kohn Pedersen Fox Associates), a global leader in skyscraper architecture, participated in the design. The tower is now home to a museum and a concert hall, restaurants, cafes, shopping malls, as well as SIGNIEL RESIDENCES and SIGNIEL SEOUL. The top-floor observation deck offers you a bird’s eye view of Seoul. 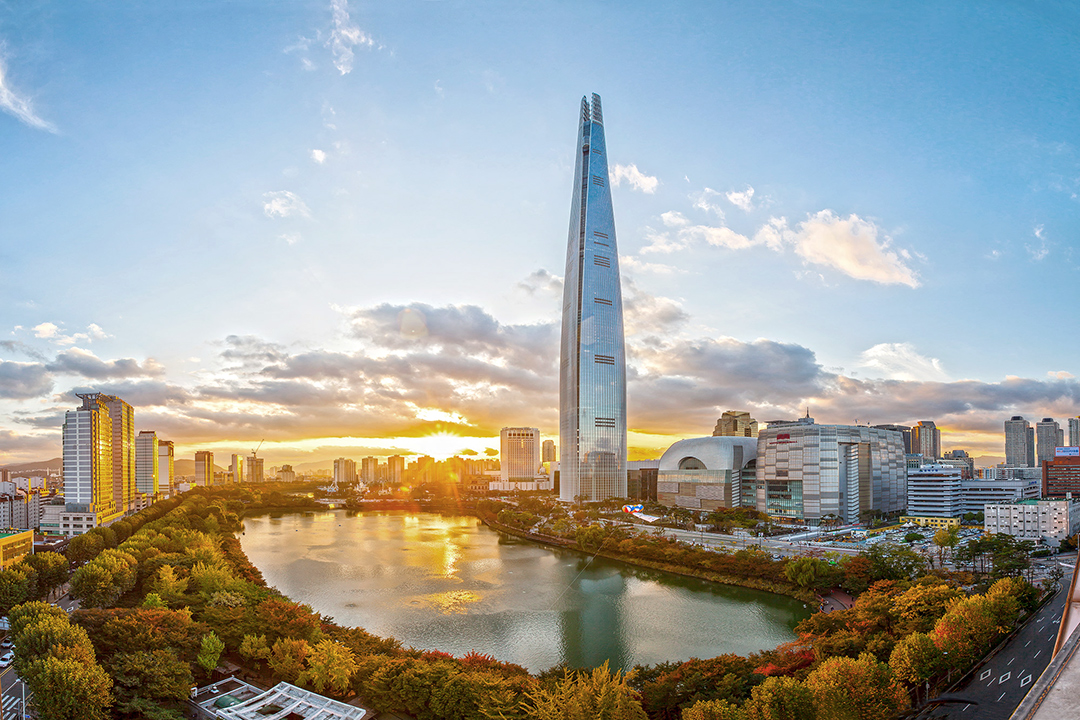 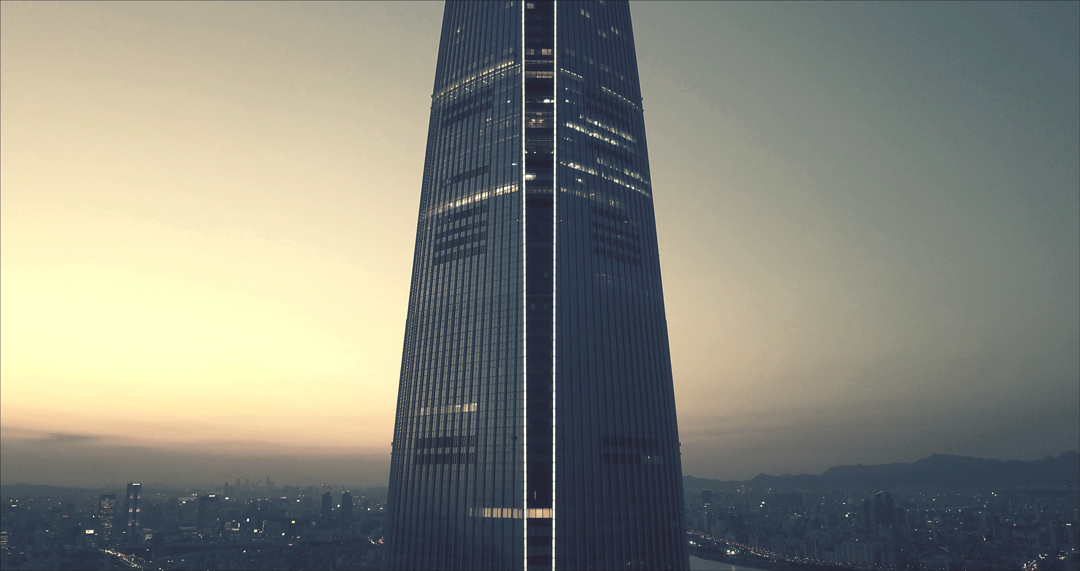 Jeongok Prehistory Museum
Completion 2011
Design X-TU Architects
Location 2 Pyeonghwa-ro 443beon-gil, Jeongok-eup, Yeoncheon-gun, Gyeonggi-do
The area around Jeongok-ri is where East Asia’s first Acheulian hand axe was discovered, a significant event in the history of world archaeology. The Jeongok Prehistory Museum was built for the purpose of commemorating the discovery and preserving the excavation site. The museum’s curvy architecture was designed by X-TU Architects of France using the motif of a primitive life form. The entire building is covered with stainless steel panels, giving it the impression of a sleek snake. Inside the museum, you can see how life was like in prehistoric days as you walk along the long cave-like space. 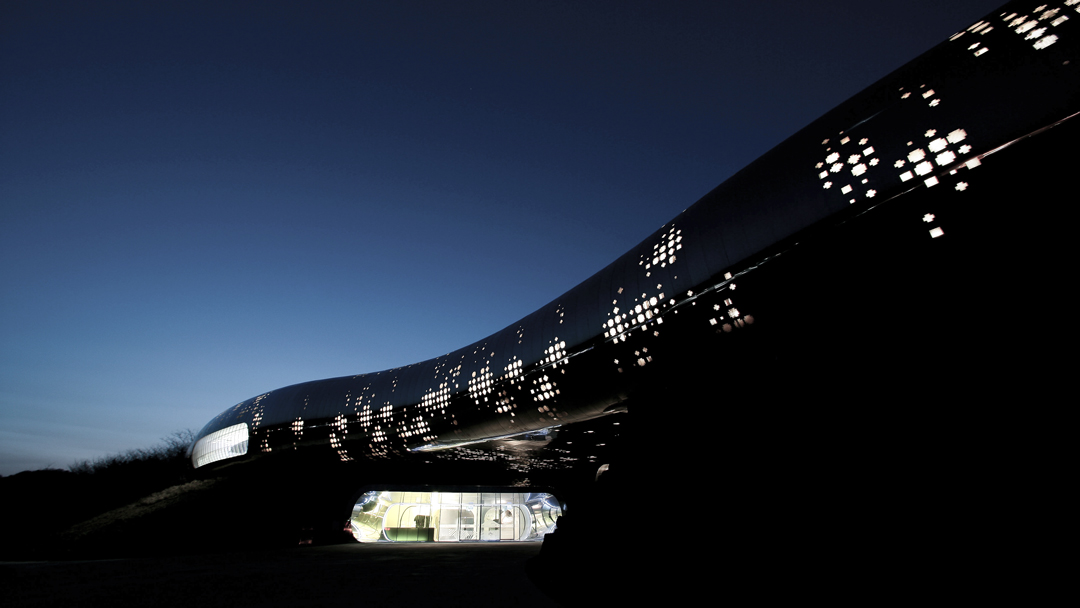 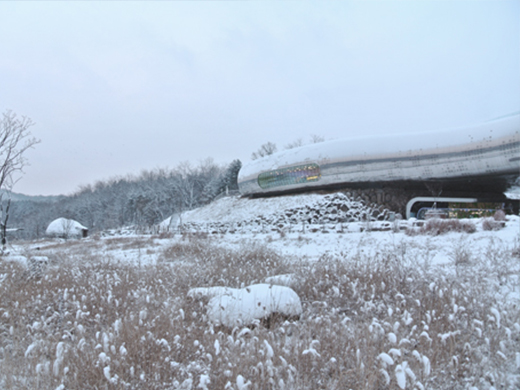 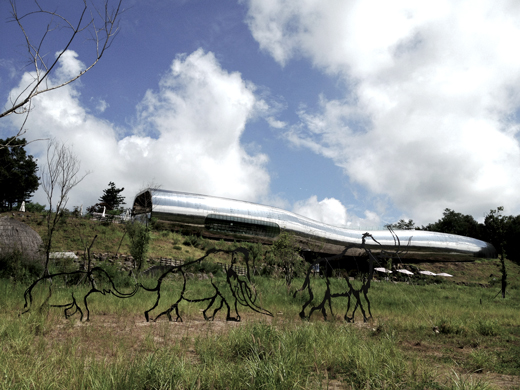 Museum SAN
Completion 2013
Design Tadao Ando
Location 260 Oak Valley 2-gil, Jijeong-myeon, Wonju-si, Gangwon-do
The Museum SAN is a general-purpose museum which used to be a paper museum run by the Hansol Culture Foundation since 1997. Japanese architect Tadao Ando who is known as ‘architecture of light’ and ‘architecture of nature’ designed the museum. On a piece of land slightly larger than 66,000㎡, the Flower Garden and the Water Garden were created. The monotonous gray building is surrounded by the walls done in local Paju stones. It’s where you can see works by Korea’s leading abstract artists. A set of stone mounds and the meditation hall were inspired by ancient tombs from the Silla Kingdom. The museum has a separate exhibition hall dedicated to world-renowned installation artist James Turrell. A terrace cafe with a stunning mountain view, pristine nature, and the architecture blend well together. 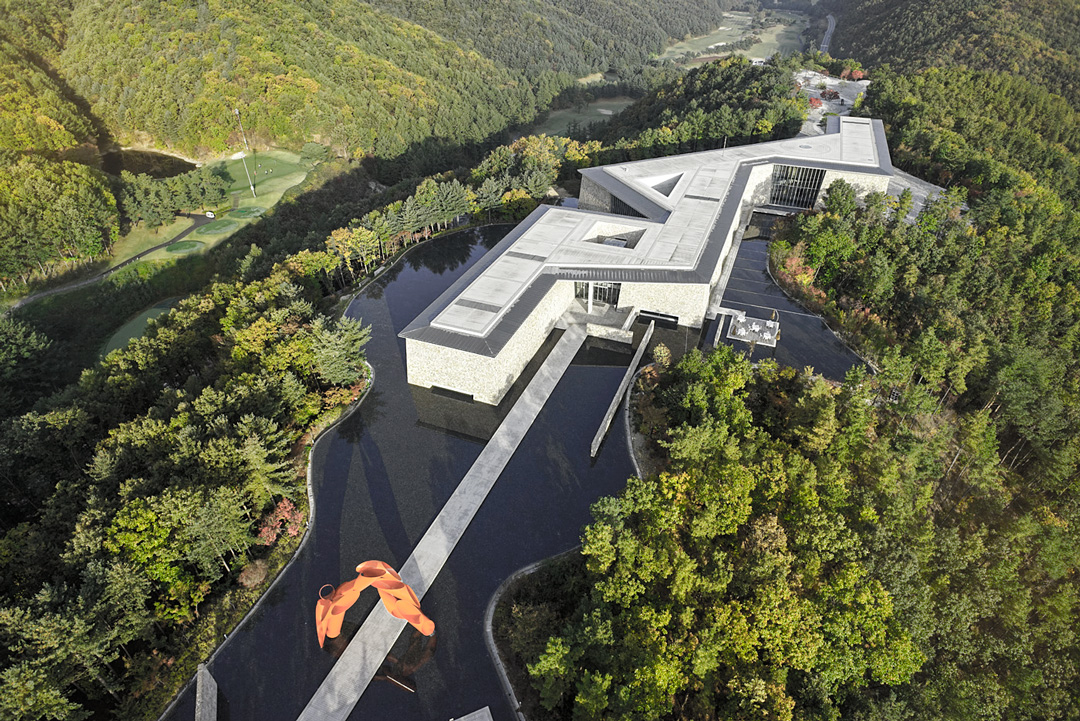 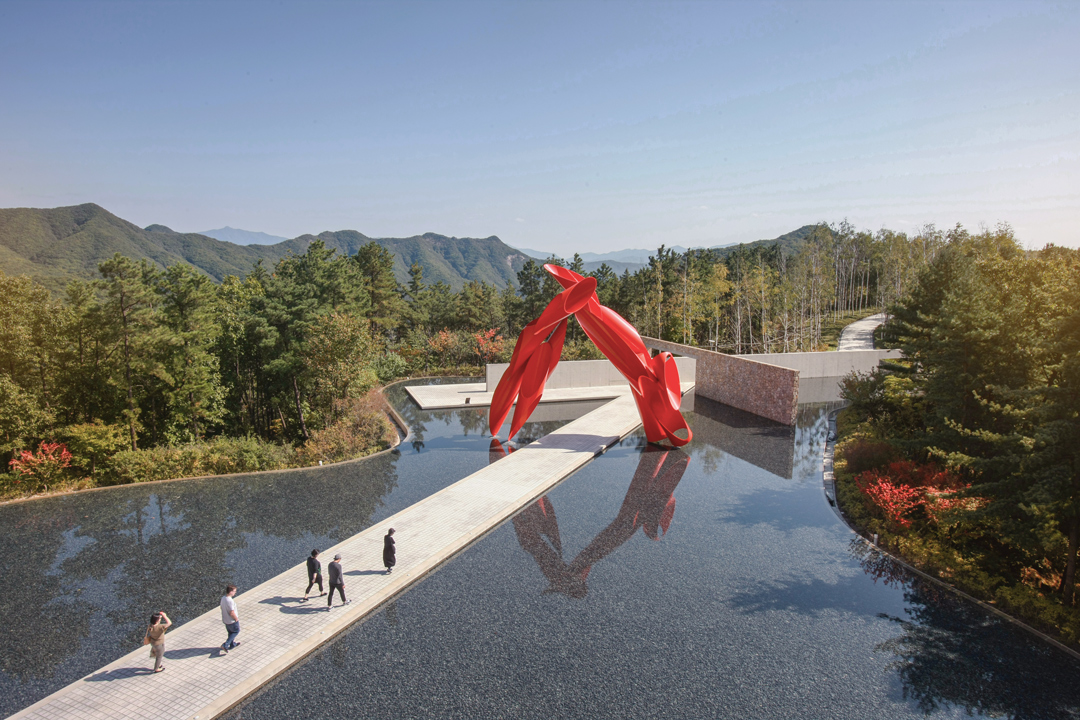 LOTTE RESORT BUYEO Baeksangwon
Completion 2010
Design Kim Seung-hoy, Kang Won-pil
Location 400 Baekjemun-ro, Gyuam-myeon, Buyeo-gun, Chungnam
The capital of the ancient Baekje Kingdom. This is the simplest, most perfect definition of Buyeo. LOTTE RESORT BUYEO also wanted to portray Baekje which existed 1,500 years ago. Or even just be able to imagine the kingdom while strolling in a space. To make that dream come true, LOTTE RESORT BUYEO had 100 imaginations and thus aptly received the name Baeksangwon. LOTTE RESORT BUYEO consists of two horseshoe-shaped buildings. Between the two inner curves facing each other is a round hanok corridor. The façade of the building features toned-down color units to copy dancheong(traditional Korean decorative coloring). Although the resort is a modern facility, it blends well with the Baekje Cultural Heritage Complex across the street. 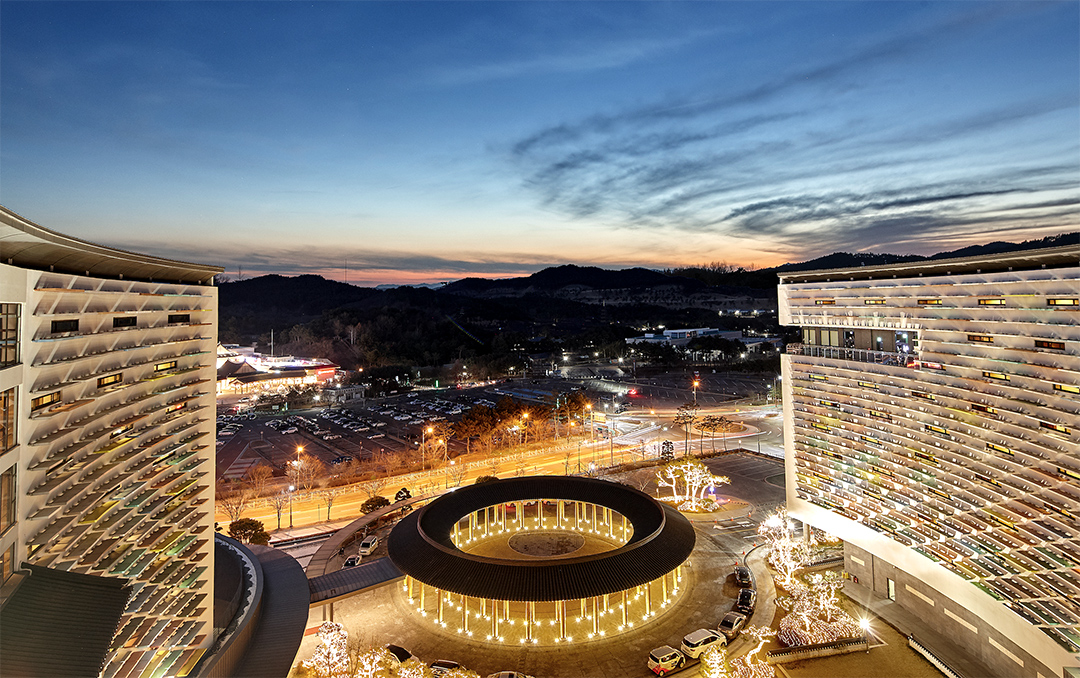 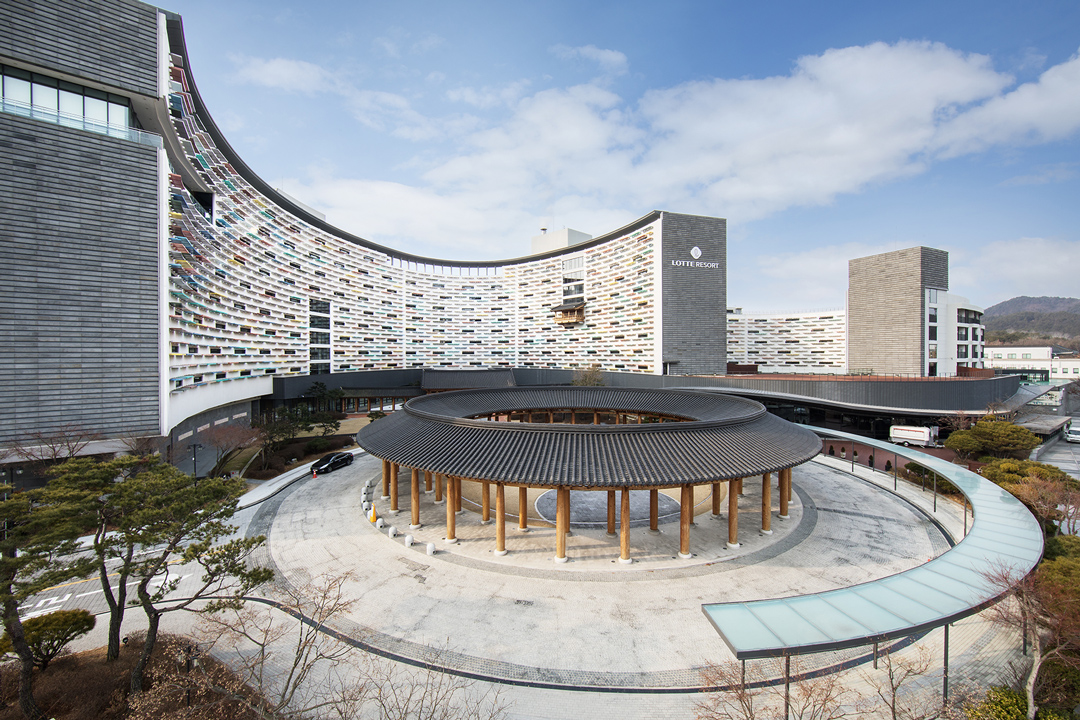 Seonamsa Temple
Completion (Est.) 9th century
Location 450 Seonamsa-gil, Seungju-eup, Suncheon-si, Jeonnam
Yu Hong-jun, an art historian and author of < My Culture Heritage Explorer > said, “The building of sansa(temple in the mountain) begins with the entry.” Twenty minutes in from the entry, the road to Seonamsa is covered in dirt and densely lined with oak trees, maple trees, and fir trees. Walking leisurely while listening to the babbling sound of a nearby stream, you will encounter the famous rainbow bridge called Seongseongyo. Thanks to the year-round blooming of various flower trees, Seonamsa is called ‘the most beautiful temple’ or ‘the most Korean temple’ among even seven mountainside temples in Korea registered as UNESCO World Heritage sites. There are many theories about the foundation of the temple, but the remaining relics point to the Unified Silla period. 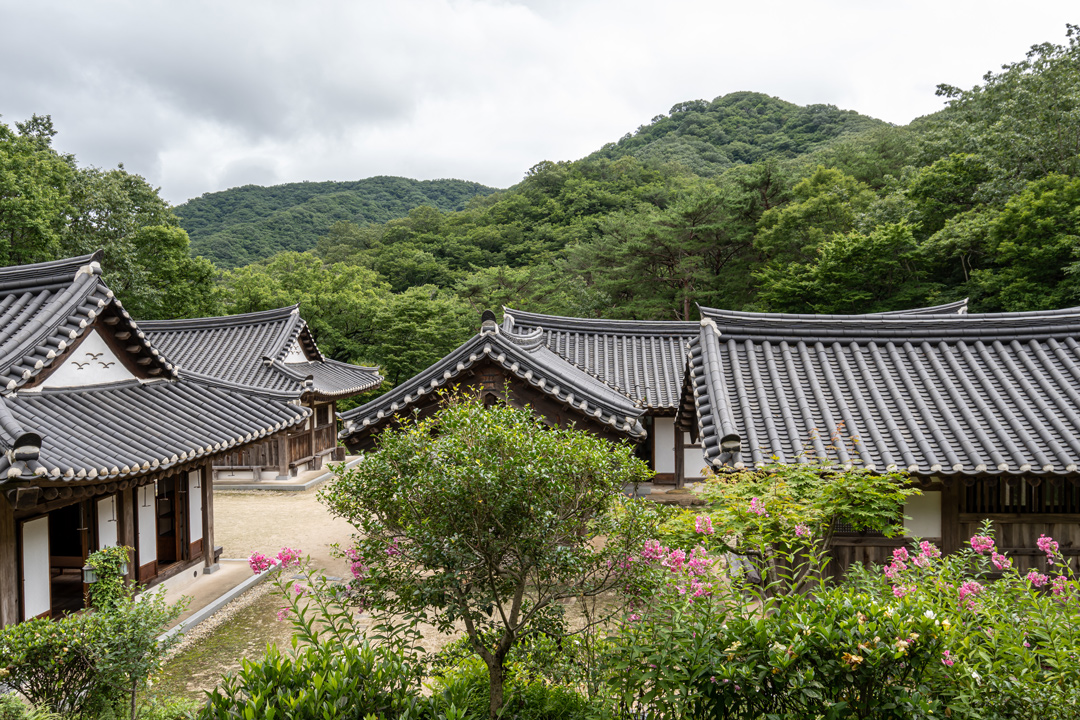 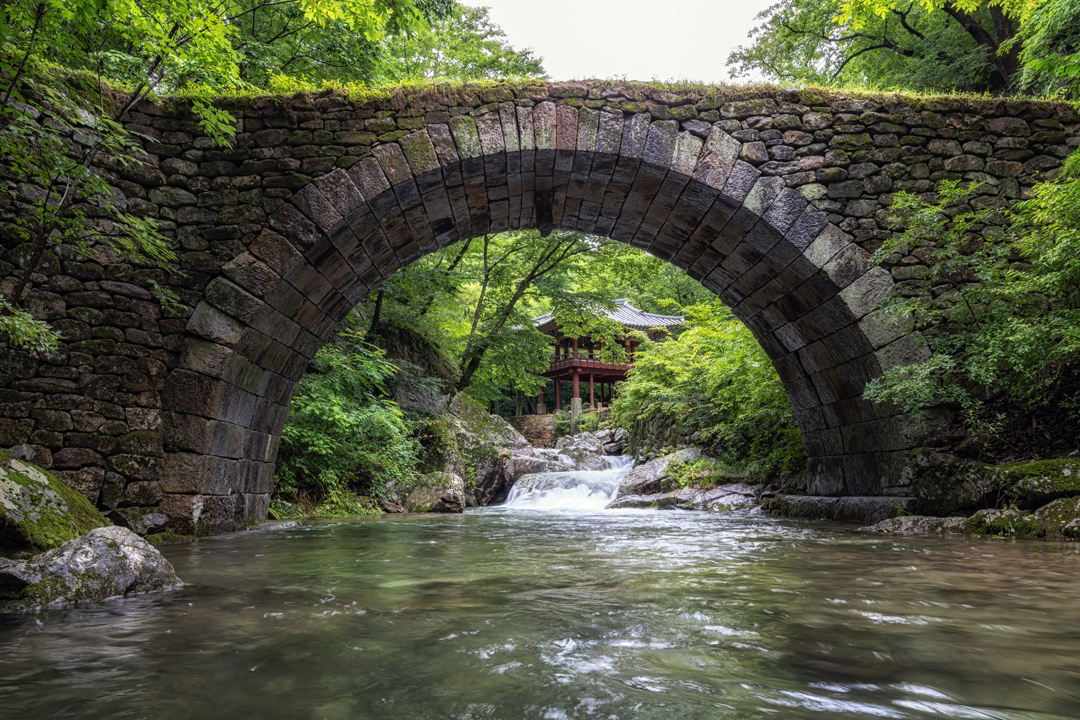 Mimesis Art Museum
Completion 2009
Design Alvaro Siza
Location 253 Munbal-ro, Paju-si, Gyeonggi-do
Paju Book City, as the name suggests, is a planned city built for the purpose of modernizing book distribution. In the northern part of the city stands a representative architecture of Alvaro Siza, a Portuguese master architect. It is the Mimesis Art Museum founded by publishing company OpenBooks. The publisher wanted to create a space where the building itself sparks joy. The Mimesis Art Museum is famous for its flowy, curved walls, and the structural design that makes different exhibition spaces of varying sizes appear as one mass. The exhibition halls create a quiet atmosphere using natural light and as little artificial lighting as possible. 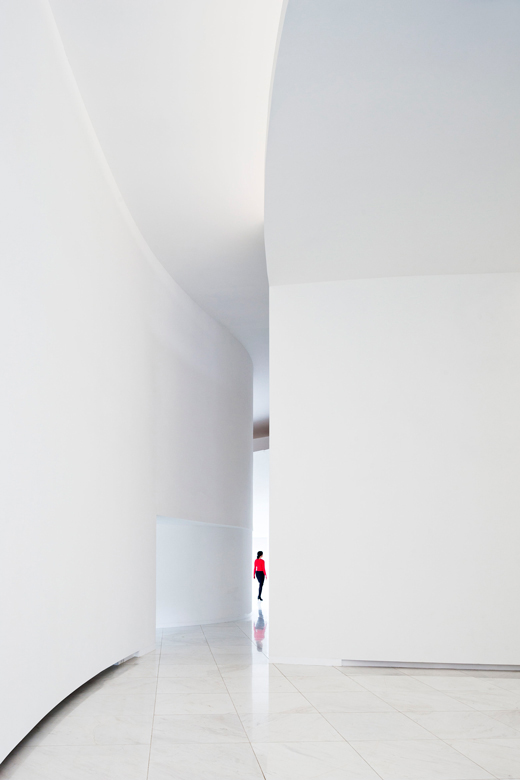 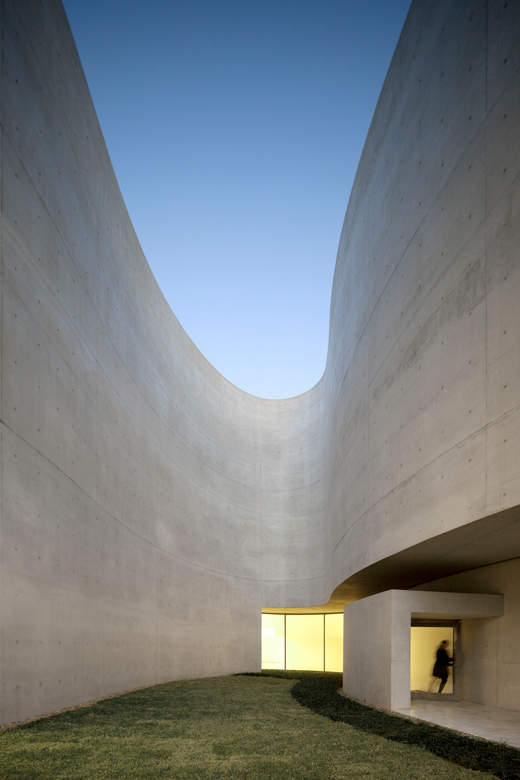 Busan Cinema Center
Completion 2011
Design Coop Himmelb(l)au
Location 120 Suyeonggangbyeon-daero, Haeundae-gu, Busan
Marking the 10th anniversary since its opening, the Cinema Center is a film culture complex located in Centum City, Haeundae-gu. It is an exclusive cinema for the Busan International Film Festival, designed by Austrian architectural firm Coop Himmelb(l)au that won the international design contest for the Busan Cinema Center in 2005. The most impressive design feature of the center is the ‘Big Roof’ over Dureraum Square. It is the longest cantilever roof in the world. The Cinema Center, also the first theater in Asia dedicated to a film festival, is divided into six spaces including the Outdoor Theater, Haneulyeon Theater, Cinema I, Cinema II, Cinematheque, and INDIE PLUS. 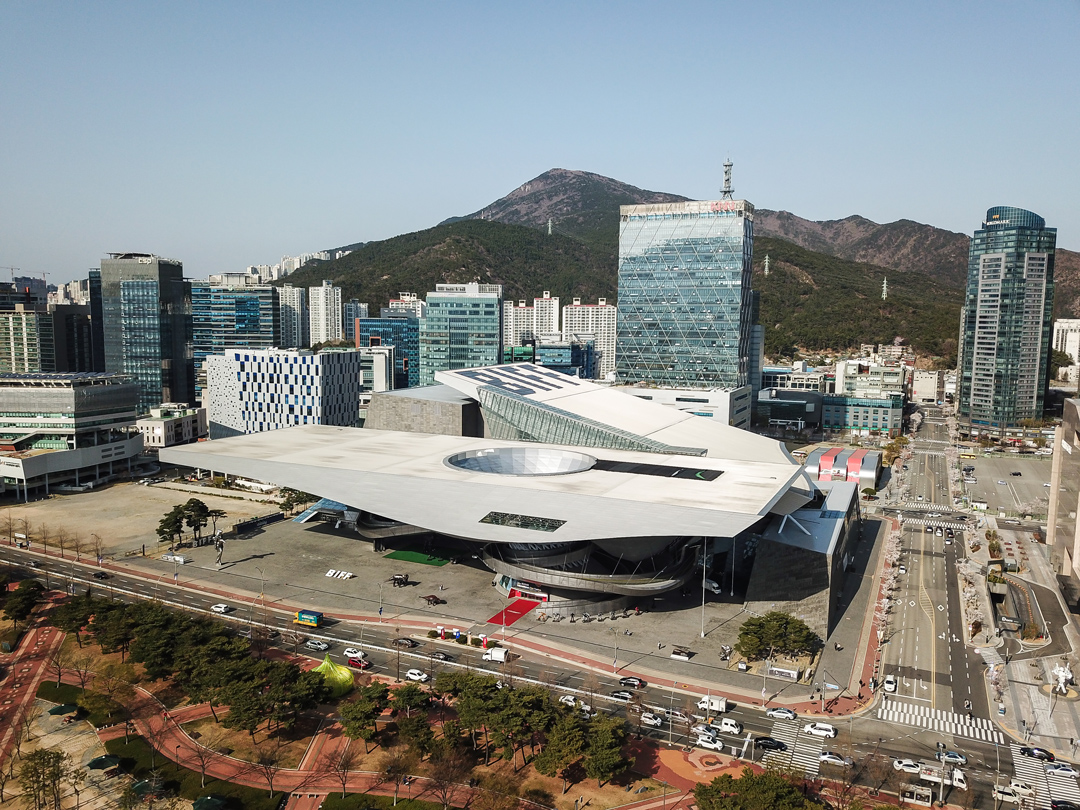 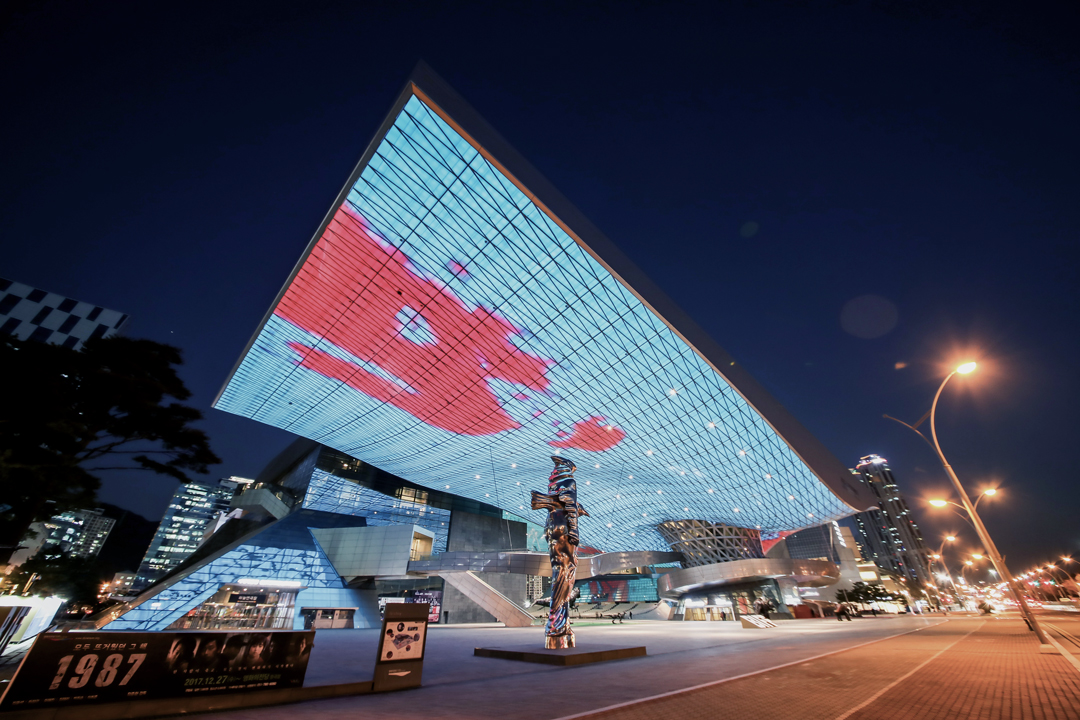 Tri-Bowl
Completion 2010
Design IARC
Location 250 Incheon Tower-daero, Yeonsu-gu, Incheon
The structure resembles three giant bowls floating on water. Tri-Bowl, a Songdo landmark, is located just past Central Park station in Songdo. The name is the combination of the words ‘triple’ and ‘bowl.’ The three inverted cones are connected with one another, creating a unique look that makes Tri-Bowl a popular backdrop in music videos, commercials and television series. Inside, Tri-Bowl hosts performances and exhibitions as a multi-complex arts center. At sunsets, LED lights at the top illuminate Tri-Bowl for even more mesmerizing effects. 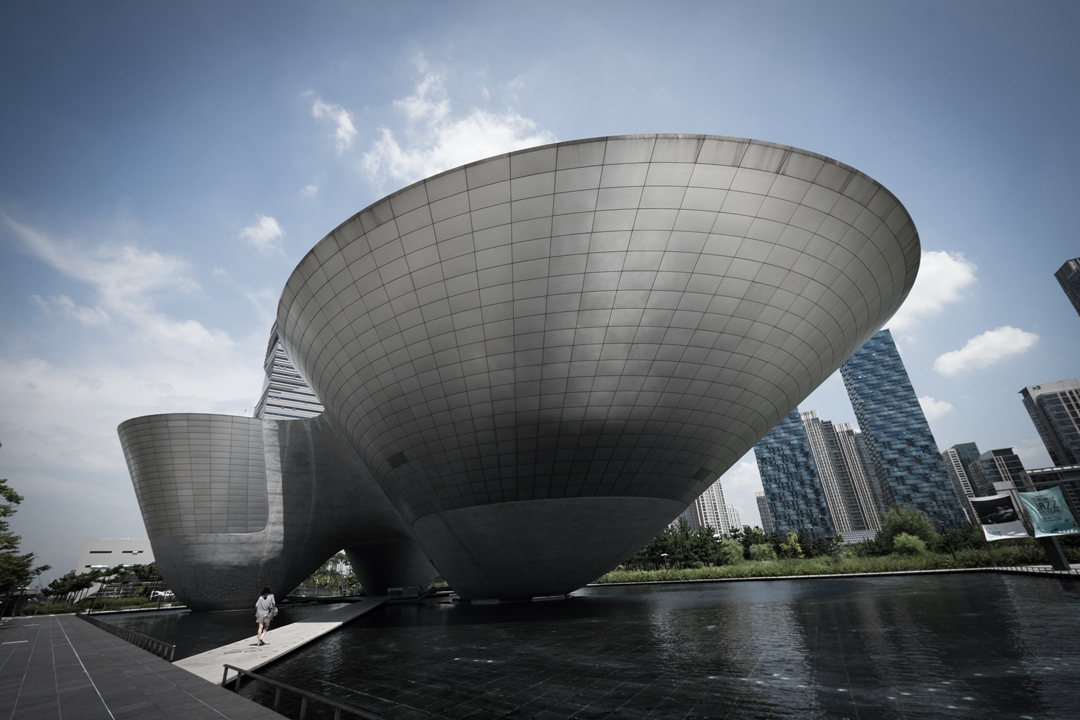 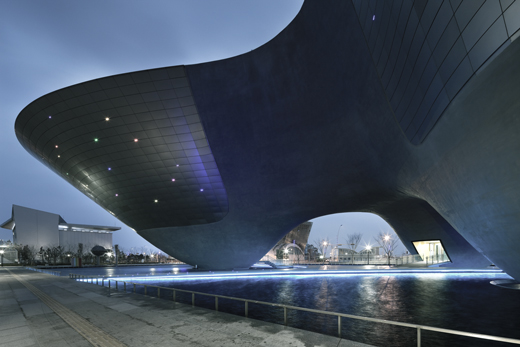 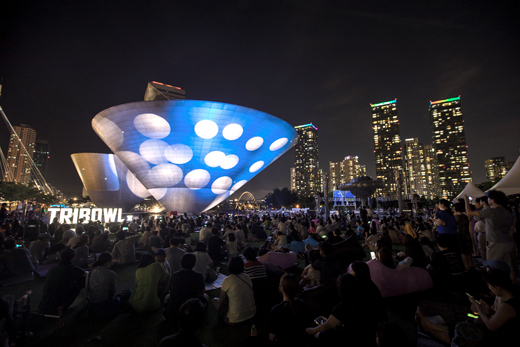 Asia Culture Center
Completion 2014
Design Woo Kyu-sung
Location 38 Munhwajeondang-ro, Dong-gu, Gwangju-si
The Asia Culture Center(ACC) is one of the largest culture facilities in Korea, with the land mass as large as 158,400㎡. Established on the former Jeollanam-do provincial government site which holds a historical significance in relation to the May 18 Democratic Movement, the center consists of five main buildings: the ACC Culture Exchange, the ACC Archive & Research, the ACC Creation, the ACC Children, and the ACC Theater. What’s unique about this place is that cultural facilities are located in the basement level, while the ground level is designated as parks and plazas. Architecture Woo Kyu-sung proposed the concept of ‘forest of light’ aimed at minimizing changes that may affect the historical significance of the location. 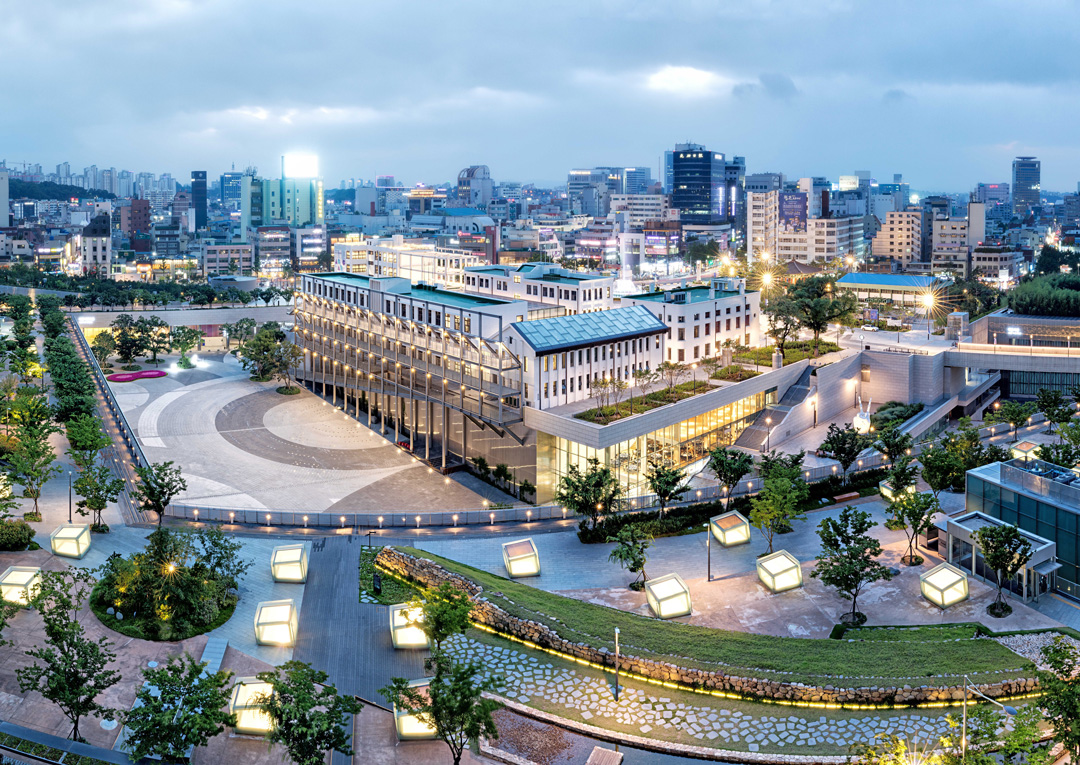 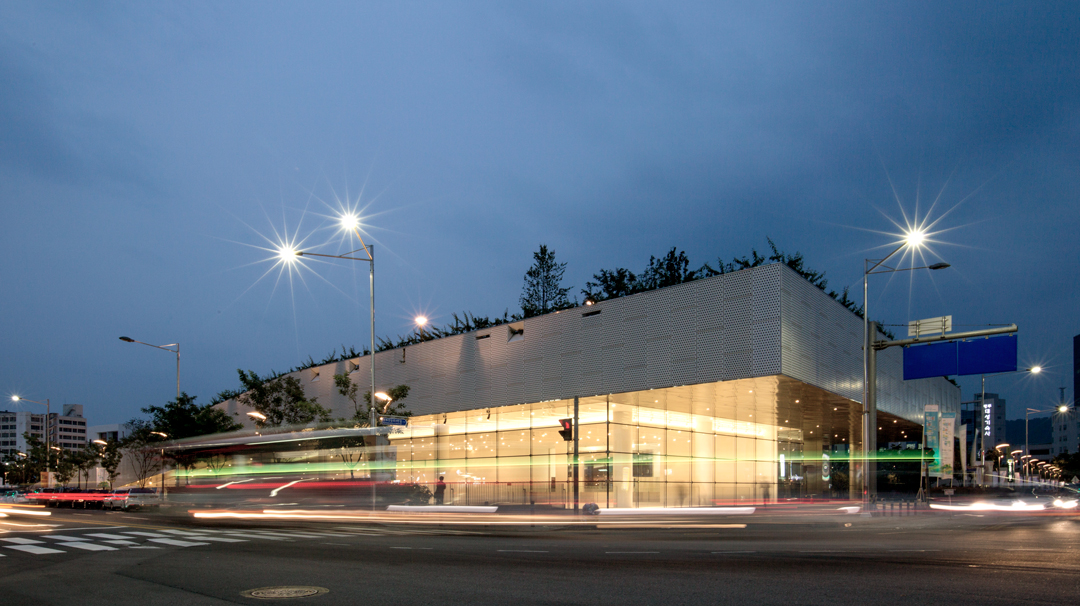 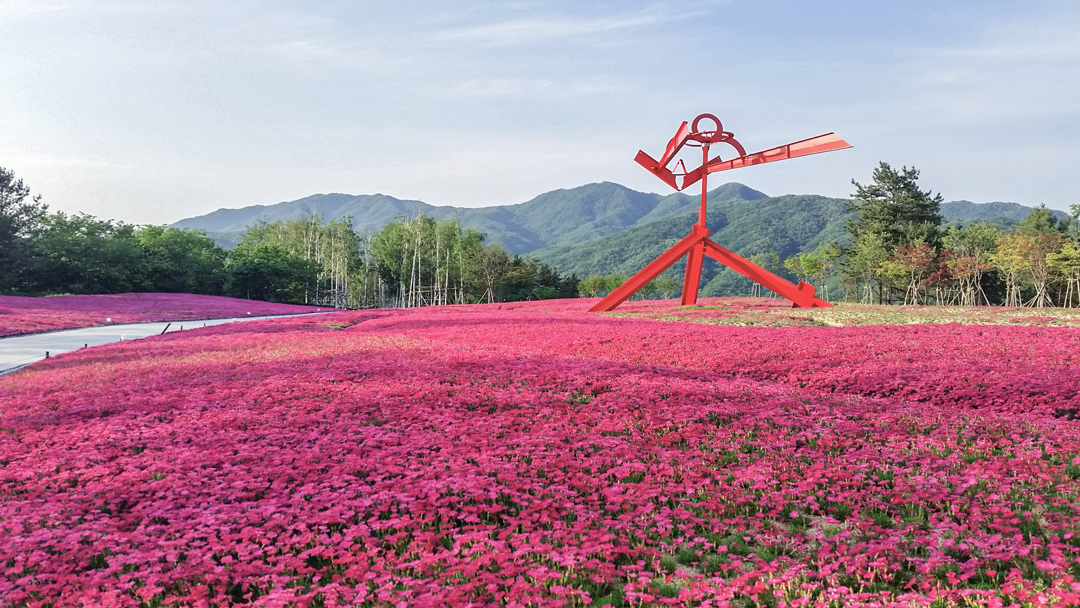 Korean Architecture Tour Guidebook
The Korea Tourism Organization has selected 56 architectural works, including traditional structures that can promote Korean traditional architecture styles and modern buildings that either have won prominent international architectural awards or feature innovative designs by renowned foreign architects. (Places where admission is limited are ruled out.) < Korean Architecture Tour Guidebook > offers interesting stories and backgrounds about featured buildings as well as relevant travel information and sightseeing courses. The book is available in four foreign languages including English, Japanese, and Chinese(simplified and traditional). You can also download it in an e-book format from visitkorea.or.kr.