Overnight Templestay at Bongeunsa
How to Get Away from It All. Things We Gained from Templestay at Bongeunsa.
People with different purposes walk among skyscrapers in Gangnam every day. Some head to Bongeunsa, an ancient temple with a thousand years of history. Bongeunsa was built as Gyeonseongsa during the Silla Dynasty by monk Yeonhoeguksa. It later became a temple that protected the royal tomb for King Seongjong of Joseon Dynasty and relocated to its current lot. The name changed to Bongeunsa, meaning it received blessings from Seongjong.
Templestays, run by temples across Korea, are open to those who want to experience Buddhist culture or who want to take time for self-reflection. To reinvigorate our mind and body in the midst of a global pandemic, we visited Bongeunsa, located across from COEX. Over Iljumun, colorful lotus lanterns were arranged neatly, ahead of Buddha’s Birthday. 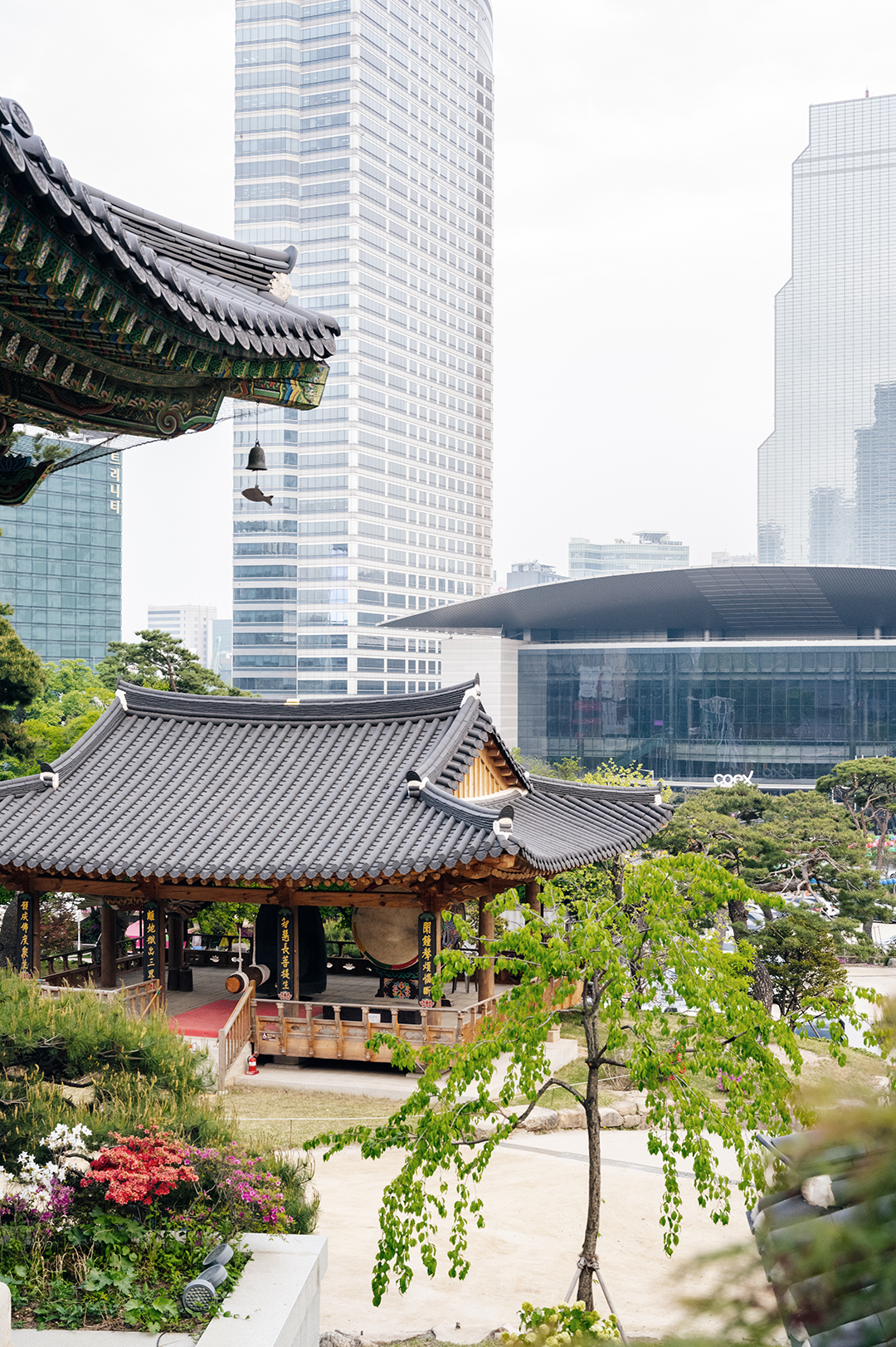 Bongeunsa is a Buddhist temple situated in the middle of the city. 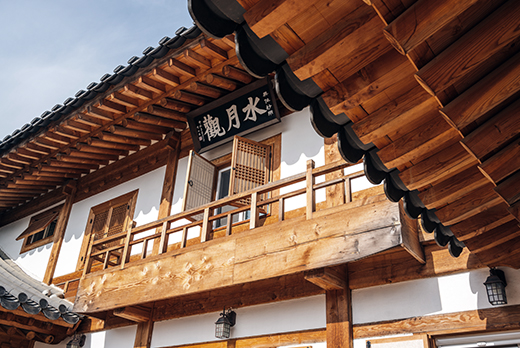 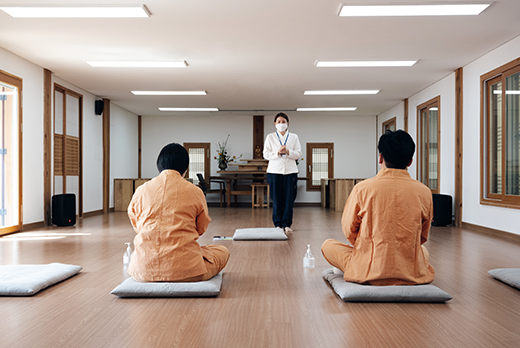 [2 PM] Orientation on Etiquettes at Temple
Half an hour before the orientation, we headed to Suwolgwan, which is where templestay programs are held. Suwolgwan is a hanok standing to the right of a three-story stone pagoda. It was at Suwolgwan that we met Yoo Nam-gyeong, in charge of templestay at Bongeunsa. We saw the room where we’d spend the day and then changed into our uniforms. Then we entered the main room at Suwolgwan for the orientation. Most of the participants looked to be in their 20s and 30s. Indeed, more than 80 percent of templestayers are in that age group. “Templestays aren’t just about staying inside a temple. It’s about experiencing what it’s like to be an ascetic at a temple,” Yoo said. Upon hearing those words, we were able to calm our minds. 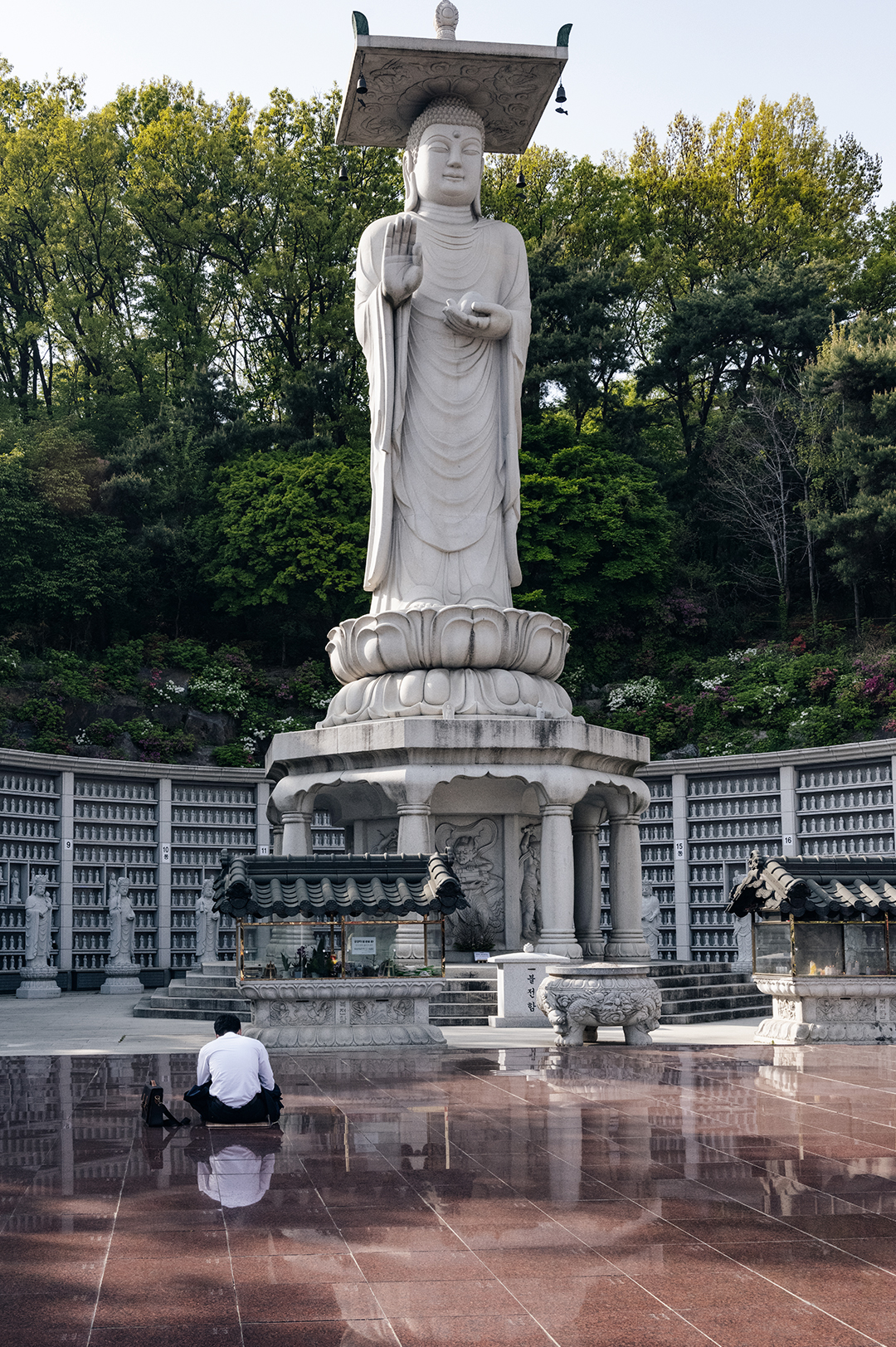 The statue of Maitreya at Bongeunsa, where people in business suits can be seen often.

[2:50 PM] Stories Behind Temple
“There are four gates at the temple: Iljumun, Sacheonwangmun, Geumgangmun and Burimun. Here at Bongeunsa, Sacheonwangmun is called Jinyeomun,” The volunteer guide explained. “Chusa Kim Jeong-hui, someone most of you know, wrote the letters on the board at Panjeon” The fascinating tale that started at Iljumun took us through different corners of Bongeunsa and wrapped up at Daeungjeon. We took in the large statue of Maitreya, and then the fresco on the outer walls at Daeungjeon. The delicate scent of incense reminded us that we really were inside a temple. 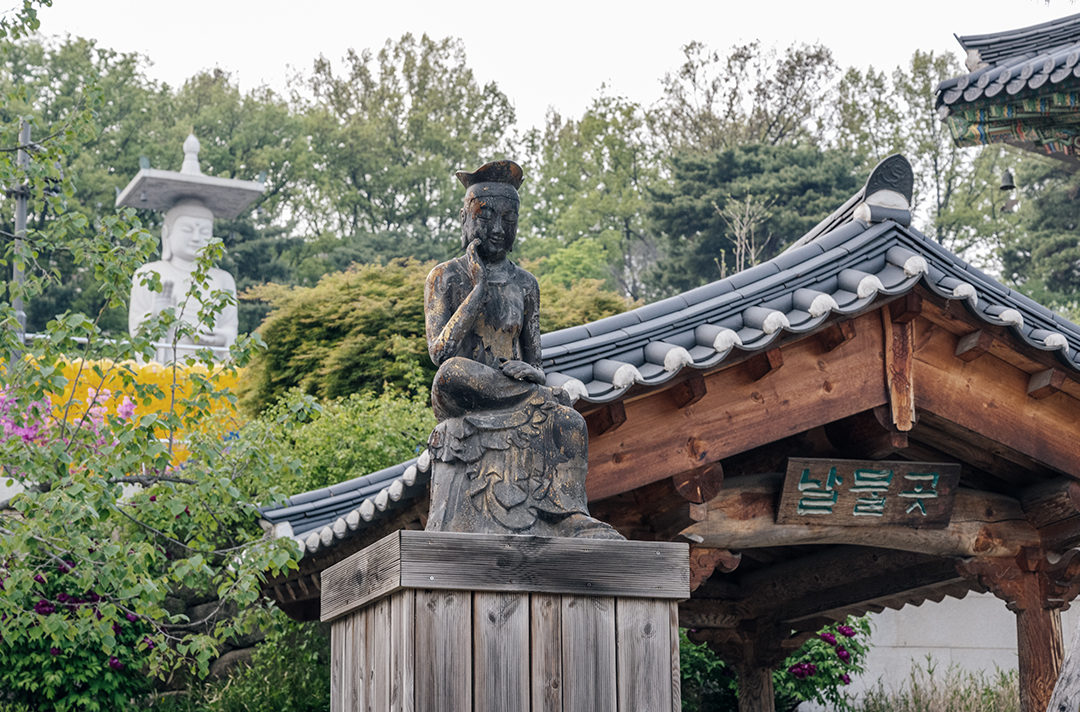 The path leading down from the statue of Maitreya. 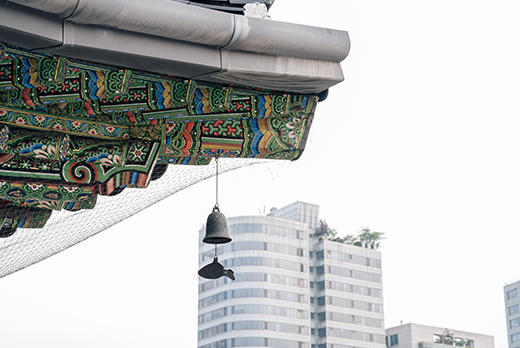 The landscape beyond the eaves and buildings all come into the same shot. 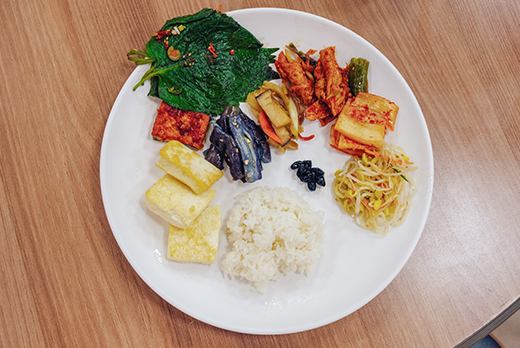 [4:50 PM] Dinner Gongyang
It may seem a bit early for dinner, but a tour around the temple will make you hungry. ‘Gongyang’ means a meal. Rice, soup and side dishes were set up in the dining hall at Bowoodang. We filled our dishes with fried tofu, sautéed mushroom, and bean sprout salad, along with green leaves and sauce. Before eating, all participants must recite ‘Ogwangae,’ or Five Stanzas of Insight. It contains gratitude for food and pledge to get rid of greed from the mind. The simple act of reading these five lines will make you appreciate the food in front of you that much more. Above all, the food tasted absolutely wonderful. We needn’t have worried about our first temple meal.

Ogwangae (五觀偈)
① 計功多少量彼來處: Where did this food come from?
② 村己德行全缺應供: I am too ashamed of my virtue to accept it
③ 防心離過貪等爲宗: Removing all greed from my mind
④ 正思良藥爲療形枯: And seeing it as medicine for my body
⑤ 爲成道業膺受此食: I receive this food to attain enlightenment. 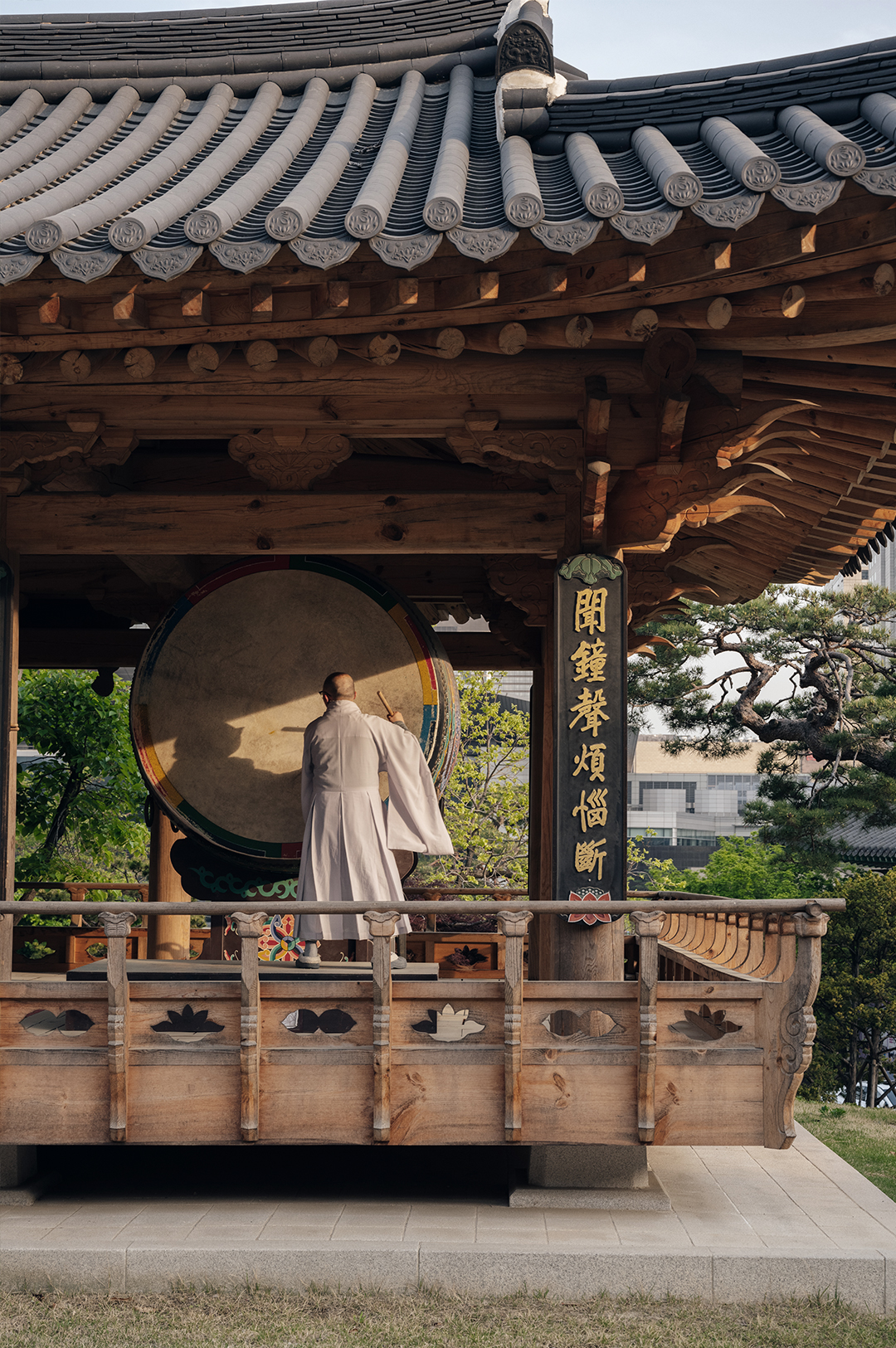 A monk is striking beopgo at the belfry. 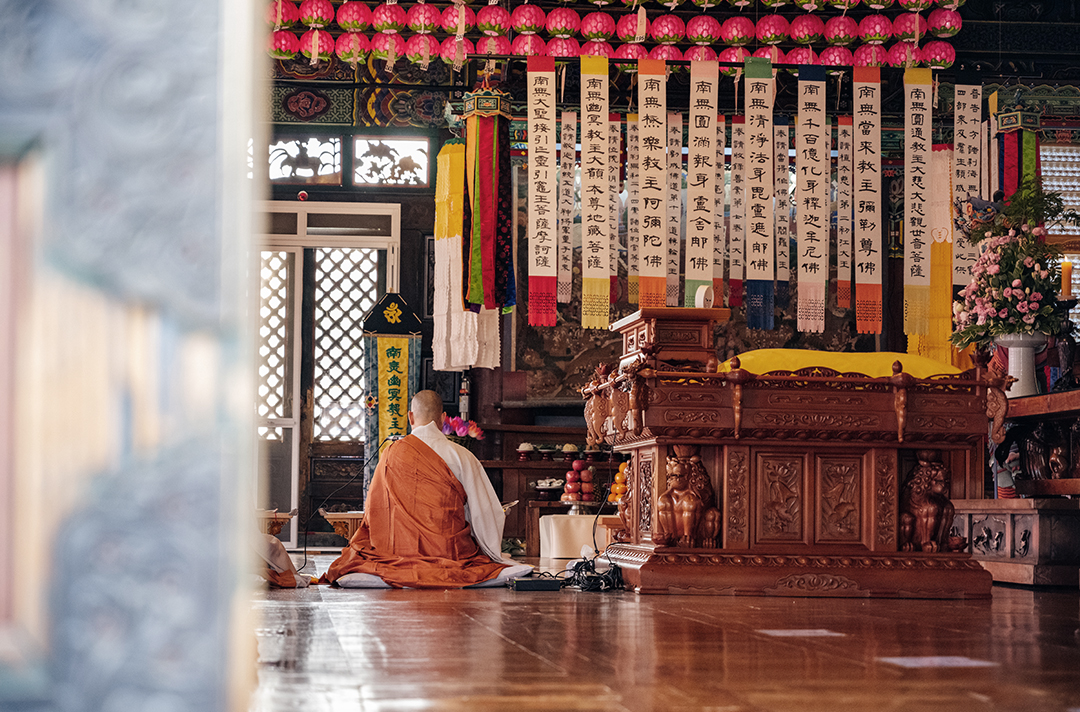 [5:40 PM] Hearing Temple Bell and Attending Service
After dinner, monks and everyone else inside the temple gathered at Daeungjeon for yebul (Buddhist service). The belfry signals the start of the evening service at 5:40 p.m. There are four types of temple bells: beomjong, beopgo, unpan and mogeo. When the time arrives, a monk hits all four bells, starting with beopgo and then beomjong, mogeo and unpan. In Buddhism, beomjong is struck for sentient beings in purgatory, and to save all forms of life on the ground, in the sky and in the water. If you’re so lucky, you can even try your hands at striking bells, under the watchful eyes of a monk. You should arrive at Daeungjeon before the bells stop, for you’re supposed to be seated inside 10 minutes before the start of the service. During the service, we repeated after the monk to recite the scripture. The calm and yet powerful voice of the monk added a solemn air to the service. 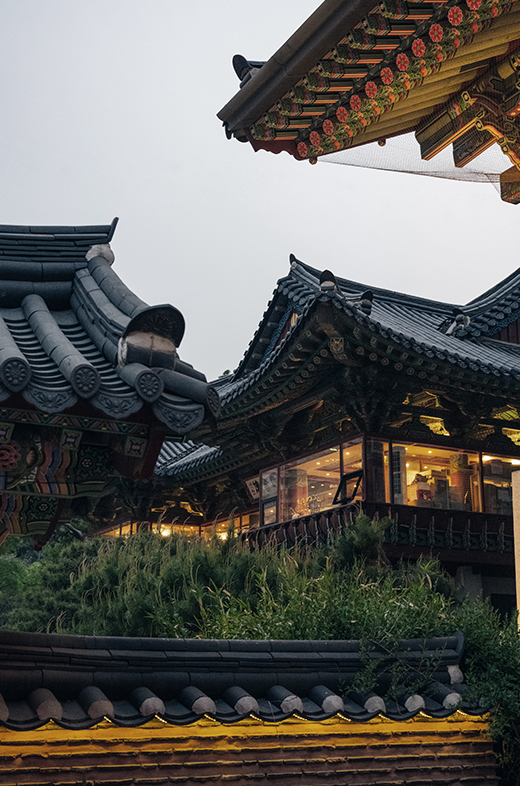 As the sun set, lights came on at Yeonhoedawon. 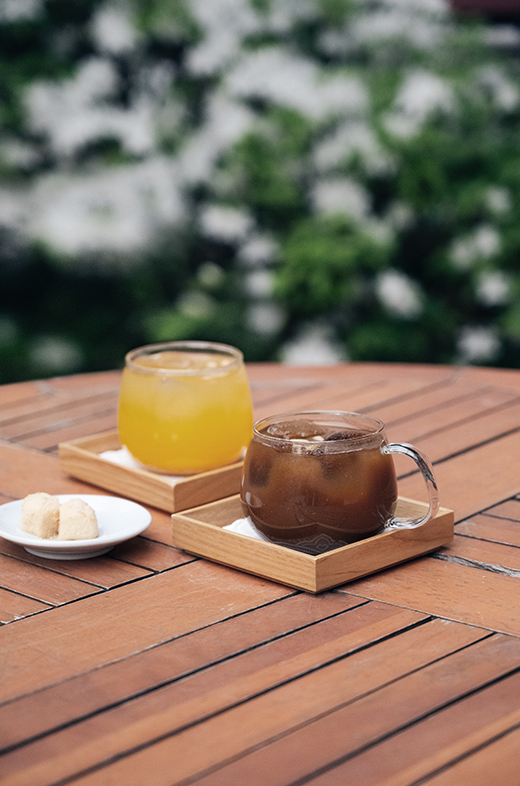 [7:00 PM] Tea and Night Stroll
The end of the evening service means the conclusion of all official events for the relaxation templestay program. Participants can spend the rest of the evening inside the temple as they wish, until lights go out at 10 p.m. And there’s a perfect place at Bongeunsa to wind down: the traditional teahouse called Yeonhoedawon. We sipped at sujeonggwa (cinnamon punch) and sikhye (sweet rice drink) while waiting for the sunset at the garden, decorated with small flowering plants. The tranquil and peaceful surroundings will make you forget about your smartphone. Located in downtown, Bongeunsa offers a beautiful night view. After a leisurely stroll, we returned to Suwolgwan. Under cotton wool covers, we fell asleep before the clock struck 10. 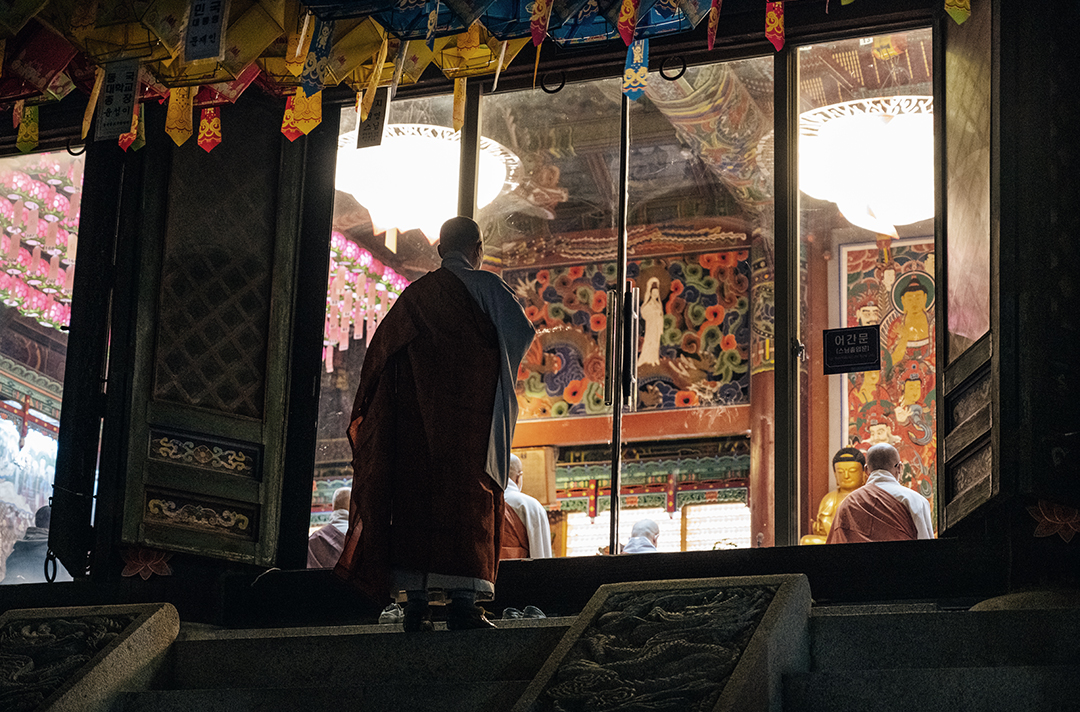 Only monks are allowed to enter Daeungjeon through the doors in the middle. 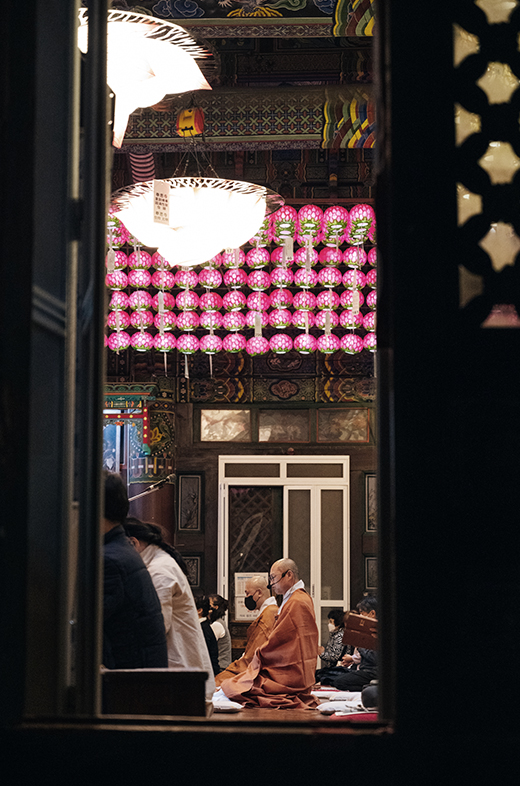 Yebul starts at the early dawn, when it’s still dark out.

[4:00 AM] New Day Begins with Early Morning Service
The day at the temple begins before the sunrise. The sound of beomjong will wake up the temple at early dawn. For the relaxation program, the morning service isn’t part of the schedule. But we’d heard the previous that the early morning service is the highlight of templestay, and we wanted to see it for ourselves. Despite the early hour, Daeungjeon was already packed with monks and Buddhists. What was it that brought them to the temple so early in the morning? The atmosphere was decidedly different than the evening service. It was still dark out as we left Daeungjeon following the morning yebul. The cool morning air and the rhythmical sound of moktak (wooden handbell) put our minds at ease. This was just the right way to start the new day. 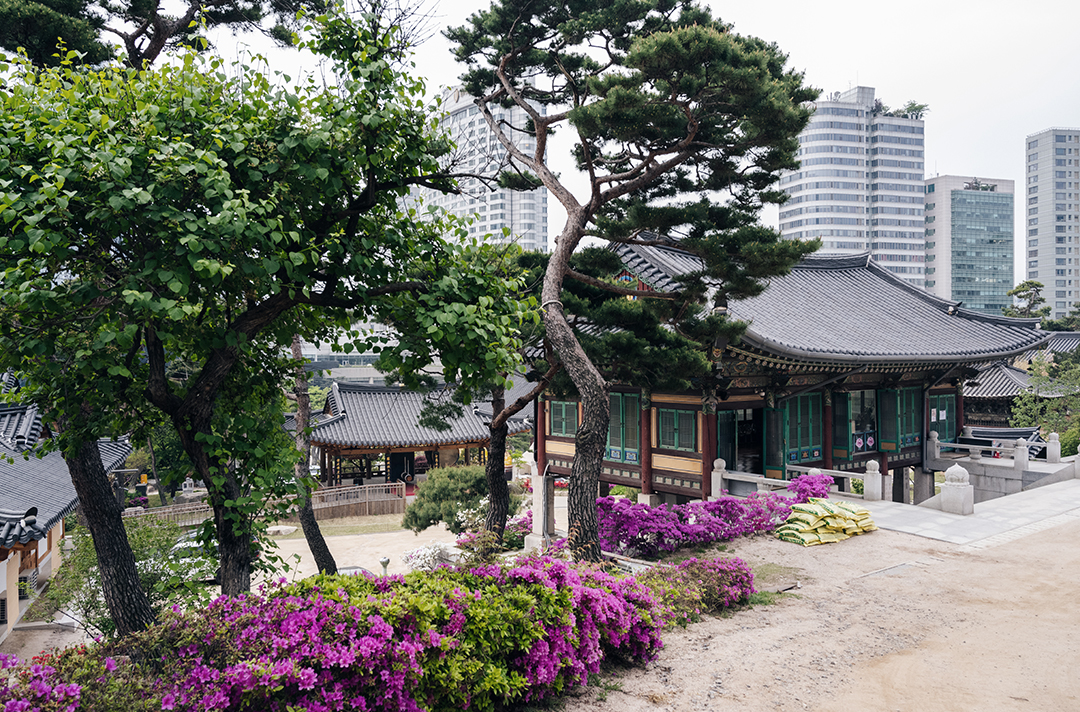 The temple has beautiful flowers and trees. 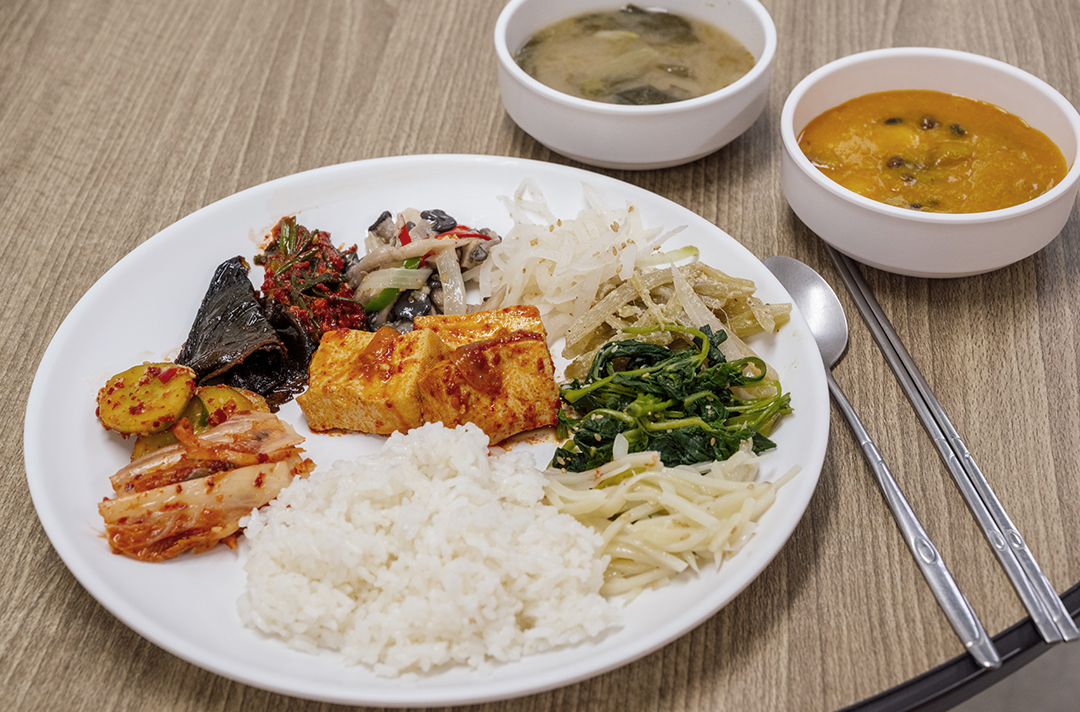 Breakfast plate, with rice and side dishes

[7:00 AM] Breakfast Gongyang
After the service, we took a morning stroll. Chirping of birds from Sudosan behind the temple and the gentle breeze provided the perfect soundtrack. Bongeunsa is a fairly big temple. It took us well over half an hour to tour the ground. And the backdrop of skyscrapers still felt strange. We headed to the dining hall at Suwolgwan for breakfast, starting at 7 a.m. There were more selections than dinner, including pumpkin porridge and japchae (stir-fried glass noodle). Side dishes, though they didn’t have much seasoning, were still delicious, not to mention soup and rice. Hot pepper paste and sesame oil were on hand for people wanting to make bibimbap. 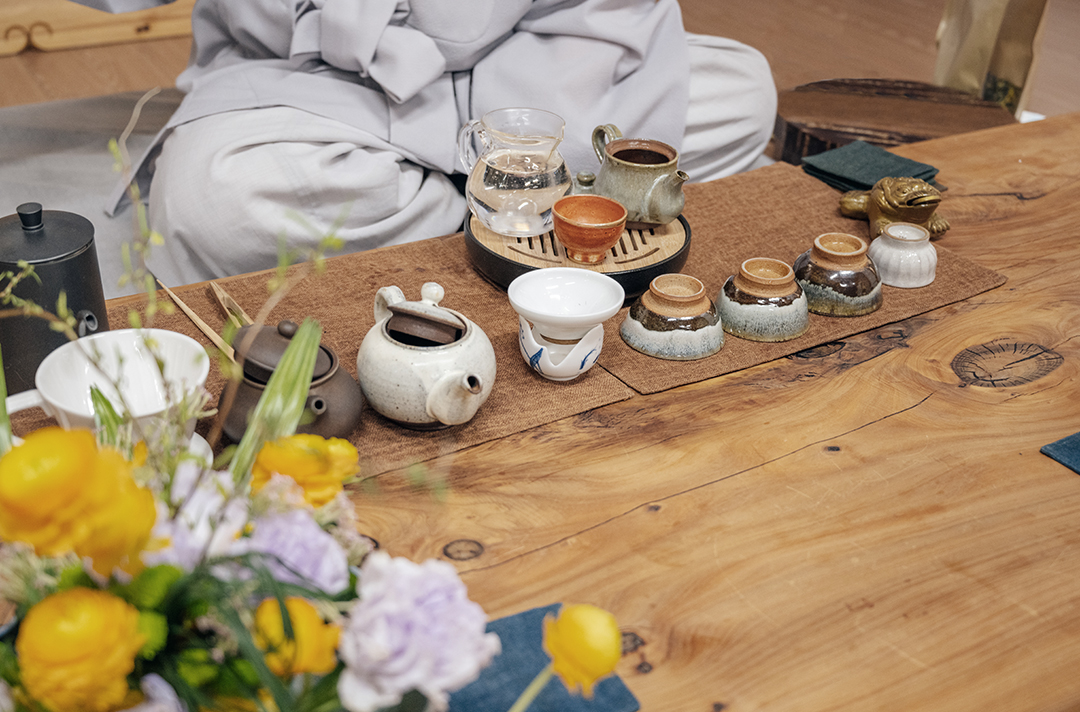 Sitting down for a chat with Monk Jeongoh over tea.

[8:00 AM] Chat with Monk over Tea
“It doesn’t matter what your religious beliefs are. You’ll be welcome here anytime you want to sit back and relax,” Monk Jeongoh said over chrysanthemum tea. After breakfast, we sat down with Monk Jeongoh, general secretary of the templeystay program at Bongeunsa, for tea. It’s normally a part of the official program. Under COVID-19 health and safety protocols, it is only held when there are four or few participants. People gather around over tea to share their thoughts on the templestay and ask questions. Sessions all vary depending on participants’ age and gender. We covered all sorts of topics: work, life and relationships. 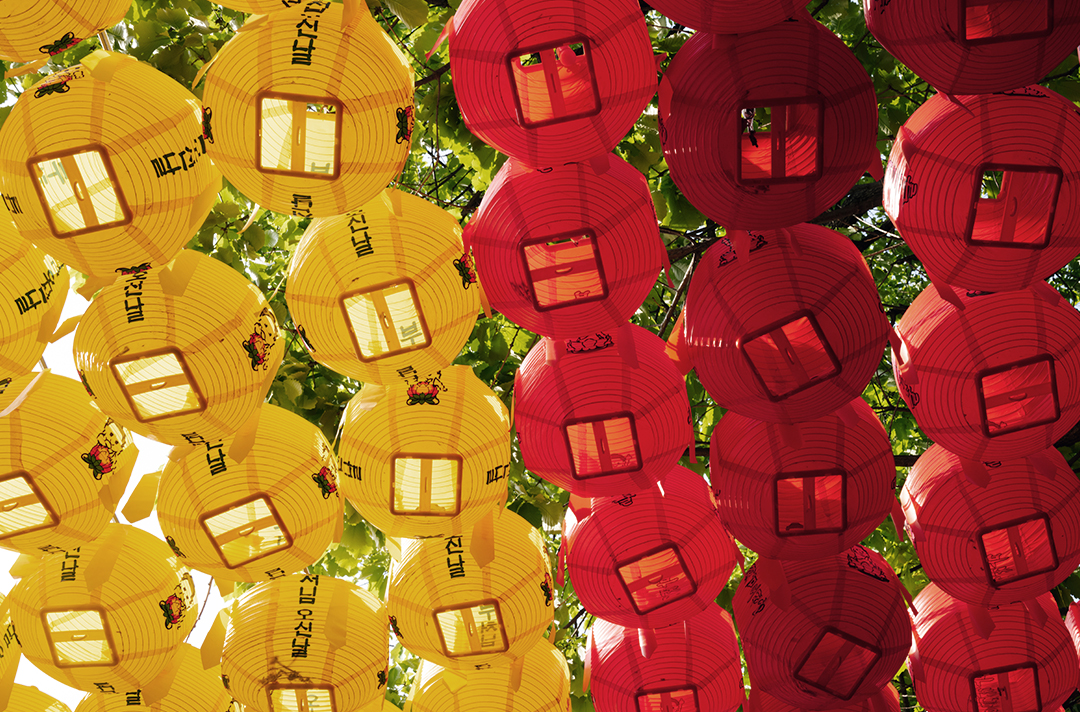 Lotus lanterns all across Bongeunsa 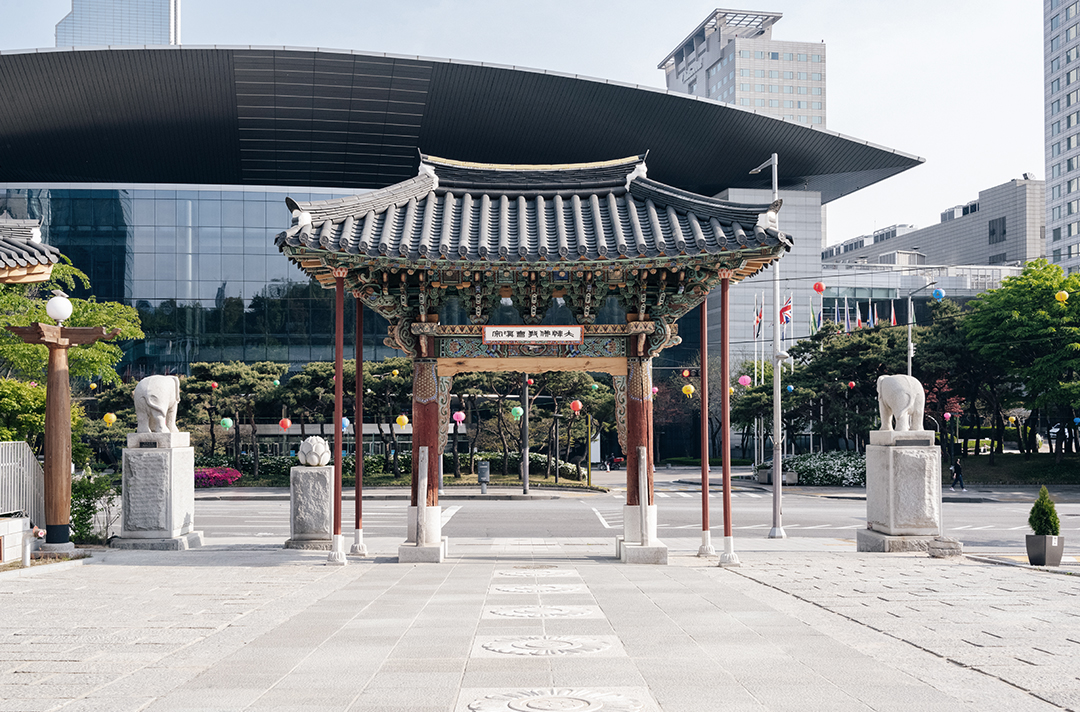 [9:30 AM] Back to Grind
We cleaned up our room and reported to the place where it all began. We wrote our review to wrap up the templestay. Everyone was dressed in the same clothes, dined at the same hour and turned the lights out at the same time. Though we didn’t have much freedom to do whatever we pleased, we still felt liberated. “Whether you do something proactively or you are forced to do something, you are in charge of your own mind. And asceticism is about learning that. You may think you’ll be free when you drop everything and go on a trip to somewhere. But once you’re there, you’re actually not free. You search for your next restaurant or destination. You’re still swimming in the sea of information. The true freedom means getting liberated from uncomfortable situations in life, no strings attached.” As we returned to our daily grind, words from Monk Jeongoh reverberated through our hearts. 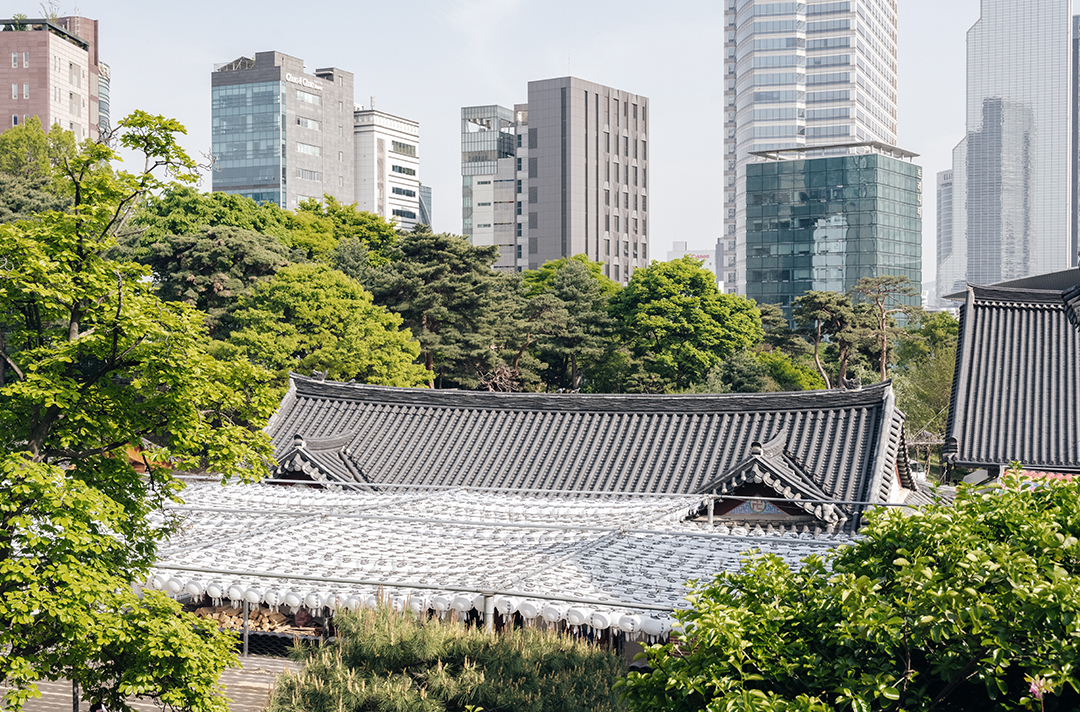 Surrounded by trees, Bongeunsa always provides a sense of comfort.

Bongeunsa Templestay
In pre-pandemic times, Bongeunsa drew 20,000 international tourists a year, and ran separate templestay programs for foreigners and Koreans. Due to COVID-19, templestays are exclusively for Koreans. You can join the ‘relaxation’ program for an overnight stay at Suwolgwan, or sign up for the activity-filled ‘Sangwolseonwon’ program for a two-night stay.
Address 531 Bongeunsa-ro, Gangnam-gu, Seoul
Inquiry +82-2-3218-4826
Website temple.bongeunsa.org