A Night of Counting Stars, 6 Best Places to See Milky Way from Korea
July is a good time to see our galaxy in the night sky. Travel photographer Kim Daehyung presents us with six best places in Korea to see the Milky Way, along with his photographs of stunning night skies.
When I was little, I could see stars very well from the yard of my country home. Stars and our galaxy shining in the night sky. When I miss those moments, I would travel across Korea in search of a similar night scene. Today, you can only witness our galaxy from a few places where there is little light pollution, such as a mountain peak in Gangwon-do. A galaxy is a cluster of stars that appear to be connected in a linear pattern. In English, it’s called ‘Milky Way’ to portray the white streak as milk flowing across the night sky, while in Korean, it is traditionally known as ‘mirinae,’ meaning it is a river resembling the shape of a flying mir(dragon).
The observation conditions of our galaxy varies depending on the observer’s bearing, and that is because every location on Earth has a different time slot during which the Milky Way is seen. In the northern hemisphere including Korea, a nice, arch-shaped Milky Way is visible from April to August. Times vary: in April, it appears at 2am; in May at midnight; in June at 10pm; and in July and August, at around early evening, right after sunset.

The view of Anbandegi in Gangneung, with the Milky Way in the backdrop

Above all, for a good stargazing experience, there should be no hindrances. Clouds are the biggest roadblocks. It is important to know whether the observation day is forecast to be cloudless. Next, no lights except for those from other stars will ensure a clear sighting of stars. That’s why the galaxy appears most vivid on an old moon night. It is also why people go to mountains or the ocean where there is no light pollution. Other conditions include low humidity and clean air without fine dust to better see the Milky Way.
1. Anbandegi, Gangneung, Gangwon Province
Galaxy Observation Time(peak hours) | March 03:00~05:00, April 01:00~03:00, May 23:00~03:00, June 21:00~03:00, July 21:00~03:00, August 21:00~03:00
Anbandegi of Gangneung is the mecca of Korean Milky Way experience. Anbandegi is a plateau village located at 1,100m above sea level, and is known for the largest highland vegetable farm in Korea. There are fewer lights at night, and the air is clean. With nothing blocking the view in all directions, the village is a great place to photograph the Milky Way. Accessible by automobile, the village attracts photographers and these days even ordinary tourists who want to see the stars in the sky. Once the sun sets and the night comes, you can see stars to your heart’s content till daybreak. If not the Milky Way, try opening the windows or sunroof in the car and take in the dark sky studded with stars. Anbandegi’s wind turbines and highland cabbage patches only add taste to the Milky Way. I encourage you to take a picture of the sunrise in mid-August, against the backdrop of the cabbage patch and sea of clouds, if you get to visit. 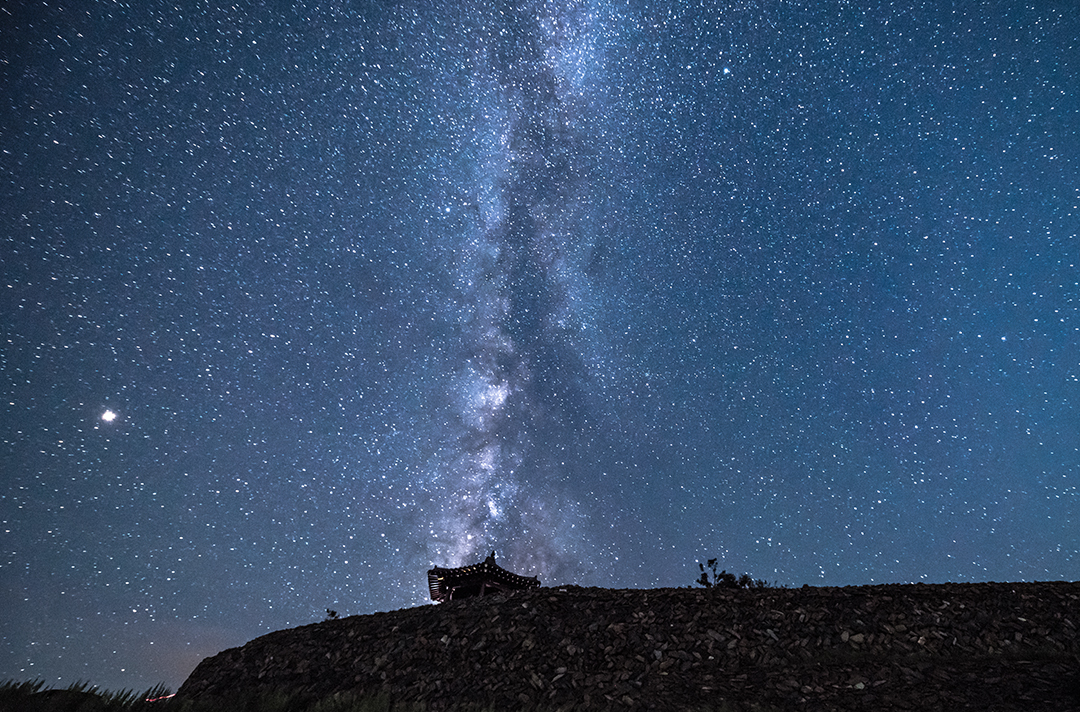 2. Homigot, Pohang, North Gyeongsang Province
Galaxy Observation Time(peak hours) | March 03:00~05:00, April 01:00~03:00, May 23:00~01:00, June-July 21:00~23:00
Homigot of Pohang, known as one of the most popular New Year’s sunrise-viewing spots along with Jeongdongjin, is also great for galaxy-gazing. As the Milky Way rises in the southeast, any place famous for sunrise vistas qualifies for the observation of our galaxy. ‘Hand of Harmony,’ a sculpture standing in the Sunrise Square, is a useful prop when photographing the Milky Way. You can capture it from an angle so that it appears to try to grab the starry cluster in the sky. Stay a bit longer after galaxy-gazing, and you can even see the sunrise in the same spot, which makes the place that much more appealing. 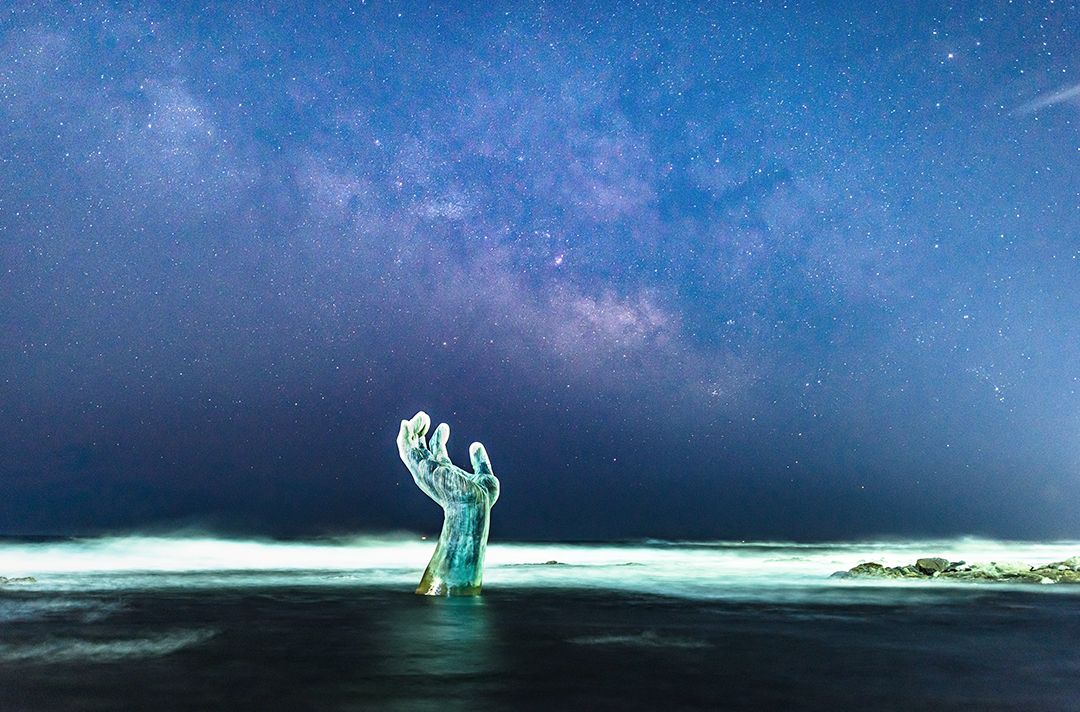 The Milky Way seen from Homigot in Pohang

Where to Stay in Pohang: LOTTE HOTEL ULSAN
LOTTE HOTEL ULSAN is a one-hour-20-minute drive from Homigot, Pohang. Located in Samsan-dong, a new downtown of Ulsan, the hotel offers 200 rooms and suites featuring spacious layouts and classy styles. Guests can view the Onsan Industrial Complex, one of the 12 scenic places of Ulsan, from their rooms. Equipped with a fitness center, swimming pool, and a golf driving range, the hotel also offers SPA EIR and sauna facilities to help guests unwind after a tiring day of traveling and end the day in a relaxed condition.
Address 282 Samsan-ro, Nam-gu, Ulsan-si
Phone +82-52-960-1000
Homepage www.lottehotel.com/ulsan-hotel 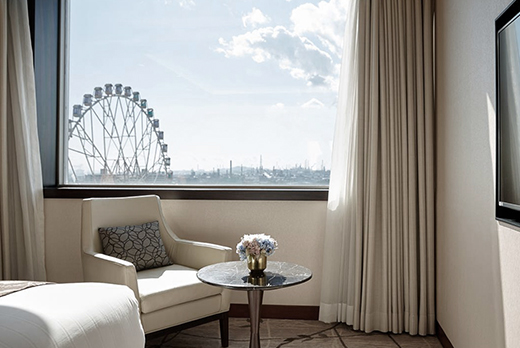 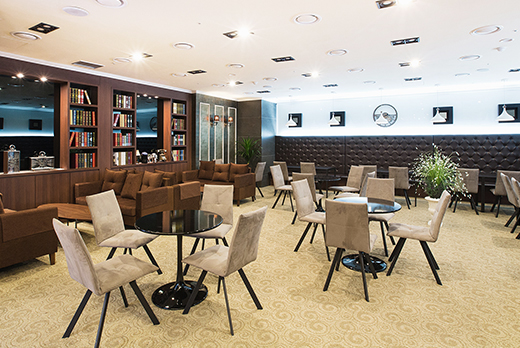 3. Hongpo Observatory, Geoje, South Gyeongsang Province
Galaxy Observation Time(peak hours) | April 02:00~04:00, May 00:00~02:00, June 22:00~00:00, July 21:00~23:00
The Hongpo Observatory, located at the tip of Nambu-myeon, Geoje-si, is also known as the Yeocha Hongpo Coastal Road Lookout. It is a perfect location if you want to go on a drive along the sea, which at nighttime presents the view of our galaxy above the horizon. The area around the Hongpo Observatory is considered a clean zone by stargazers, having no light pollution except for lights from the fishing boats in the waters. The Milky Way appearing over small and big islands such as Daebyeongdaedo and Sobyeongdaedo is breathtaking. On a day when there is a high wave alert, even the fishing boats have to retreat, making it easy to get a good look at our galaxy. The observatory is set up so that anybody who pauses for a moment can view the Milky Way without any problem. 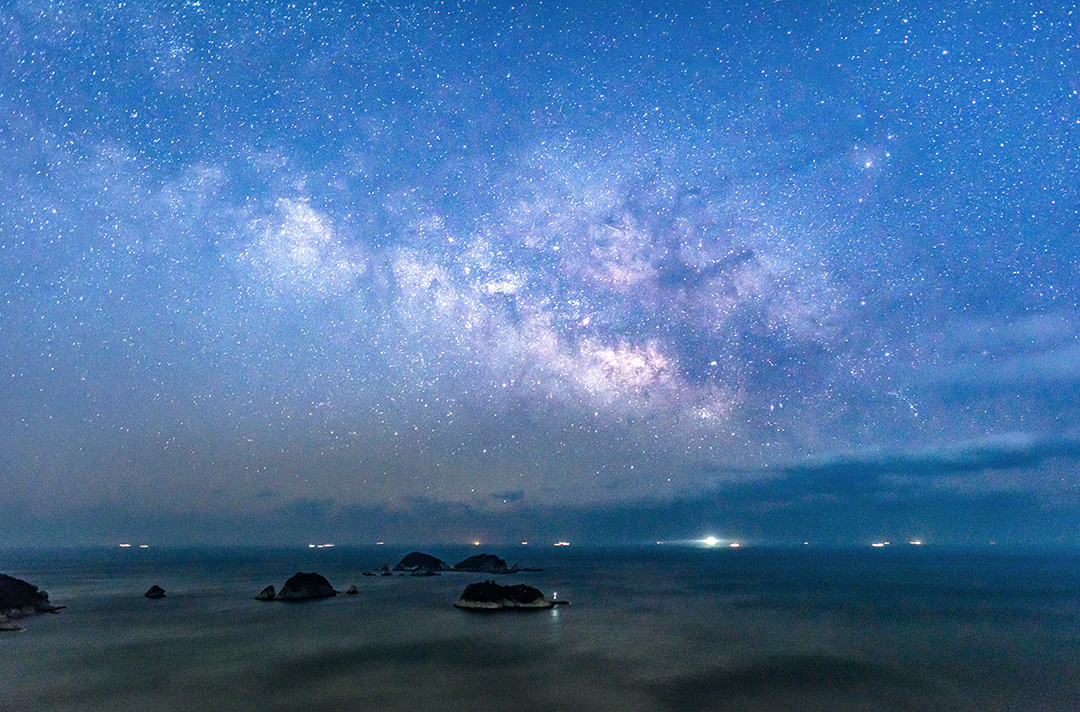 The Milky Way has risen above tiny islands of Geoje.

4. Beotgogae, Yangpyeong, Gyeonggi Province
Galaxy Observation Time(peak hours) | April 02:00~04:00, May 00:00~02:00, June 22:00~00:00, July 21:00~23:00
Beotgogae Tunnel in Yangpyeong has long been known as a stargazing spot. It is particularly popular for the famous shot of our galaxy from inside the tunnel. By car, it takes about an hour from Seoul to get to Beotgogae Tunnel, which makes it the closest Milky Way viewing spot to Seoul. Always be mindful of cars passing, even on a quiet road early in the morning. You are advised to stay to the sides of the road if possible to observe our galaxy. 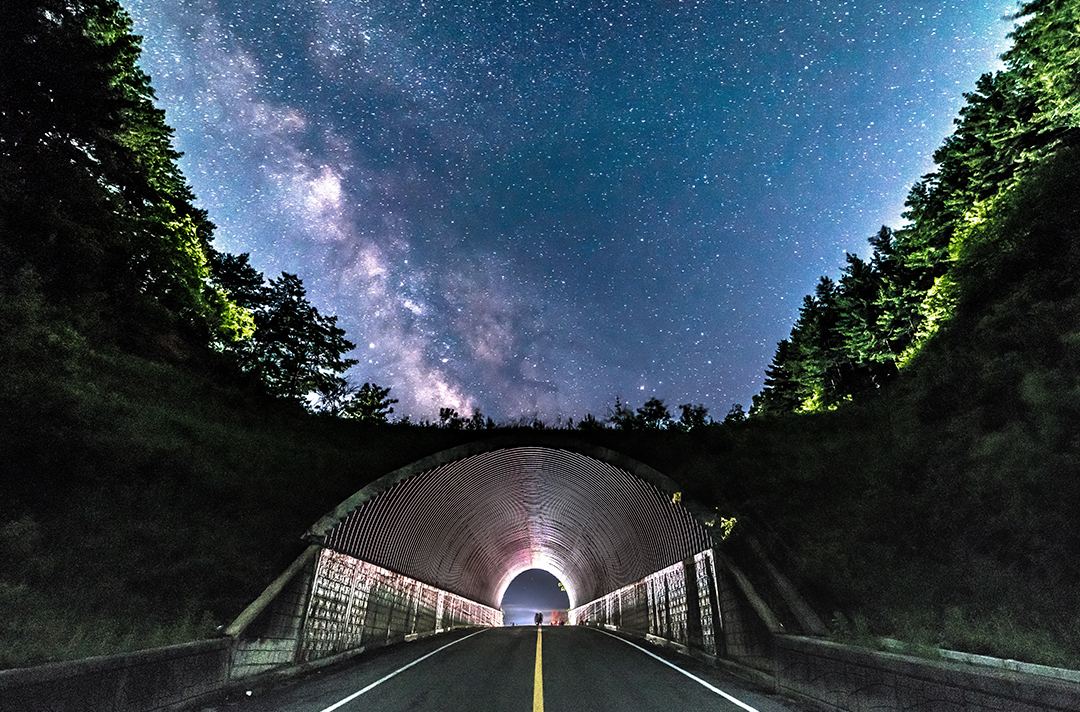 The Milky Way is seen over Beotgogae Tunnel in Yangpyeong.

5. Deokjusanseong Fortress, Jecheon, North Chungcheong Province
Galaxy Observation Time(peak hours) | April 02:00~04:00, May 00:00~02:00, June 22:00~00:00, July 21:00~23:00
The starlight we see today has reached us after traveling across the universe for light years. Stargazing from a historic site brings an odd sensation that time and space are warped. Deojusanseong is an ancient fortress situated in Hansu-myeon, Jecheon-si, and is presumed to have been constructed during the period of Unified Silla. The fortress has recently become popular among galaxy observers. Thanks to its accessibility, many people are visiting the site to see our galaxy. You can relish both the elegant Korean traditional architecture and the mesmerizing Milky Way. 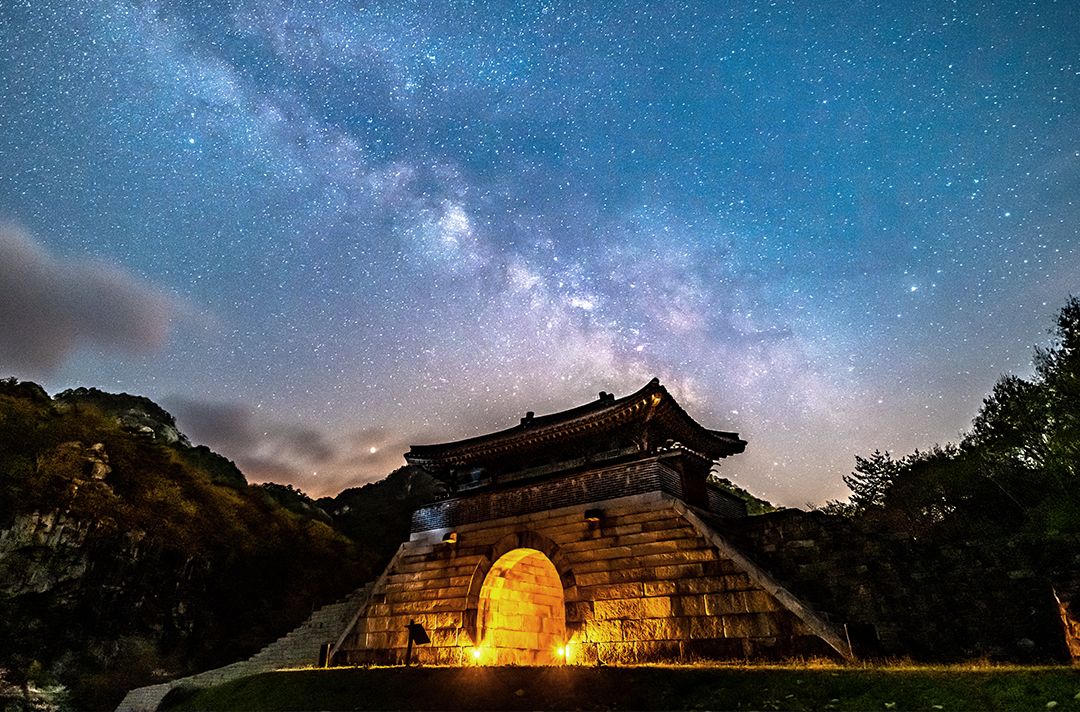 Deokjusanseong Fortress in Jecheon with the Milky Way

6. Unyeo Beach in Anmyeondo, Taean, South Chungcheong Province
Galaxy Observation Time(peak hours) | June 02:00~04:00, July 00:00~02:00, August 22:00~00:00
Unyeo Beach is one of a few places on the western coast where you can see our galaxy. It is in the southern part of Anmyeondo, the biggest island in the western sea. When the tide is high, the sea water forms a small lake on the sandy beach. This temporary lake sometimes reflects the stars up in the sky or the pine trees along the shoreline on its surface for a spellbinding scenery. Unyeo Beach, being in the west, is where you can enjoy watching the Milky Way for the longest hours in Korea. The vertically-positioned galaxy above the pine grove in the signature image of Unyeo Beach draws your attention. 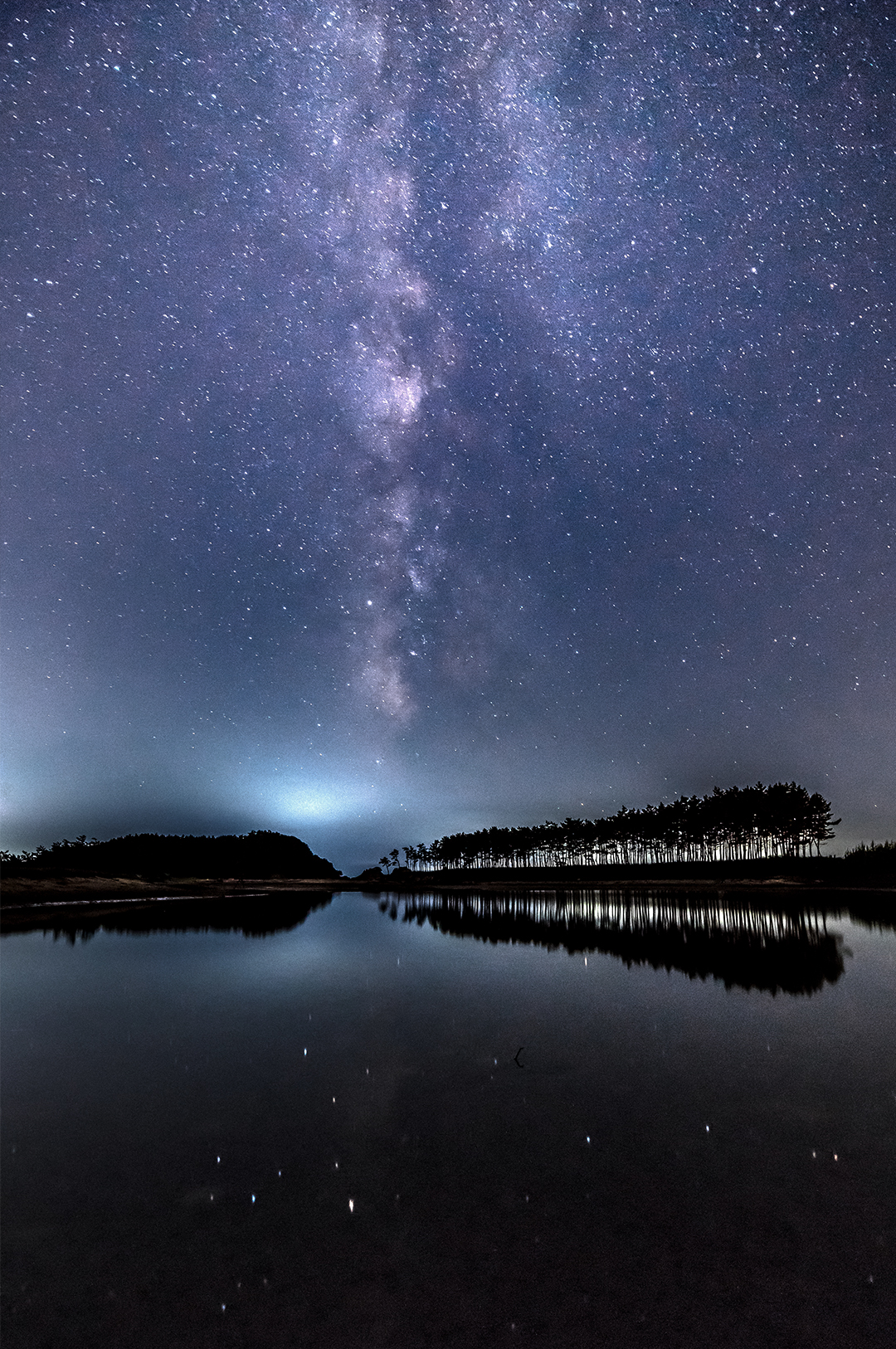 The Milky Way stands vertically over Unyeo Beach at Anmyeondo.