Storm King Art Center, Vision Written in Nature
The town of Cornwall is located about an hour drive north from Manhattan. An entrepreneur with a unique vision incorporated art as a medium allowing people to appreciate beautiful natural surroundings in this picturesque town even more. This is the story of Storm King Art Center, created in 1960.
Cornwall in Orange County, New York, has a population of about 12,000. The quite town is home to mid-19th century style buildings, and attracts some 200,000 visitors from around the world each year. It’s thanks to Storm King Art Center. The open-air museum has the largest collection of modern and contemporary outdoor sculptures in America and is one of the world’s most important sculpture gardens. 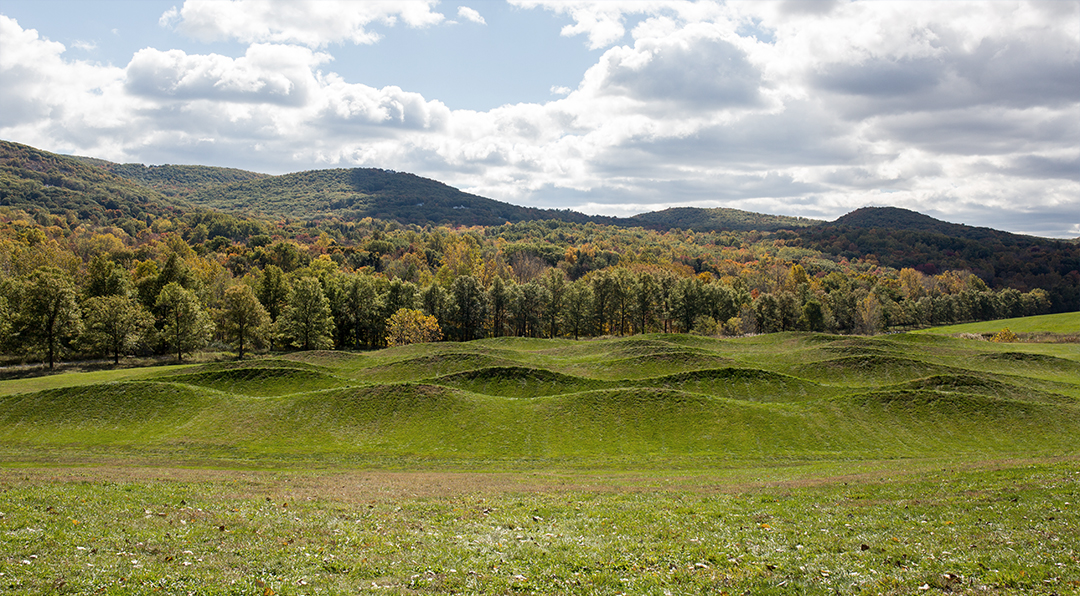 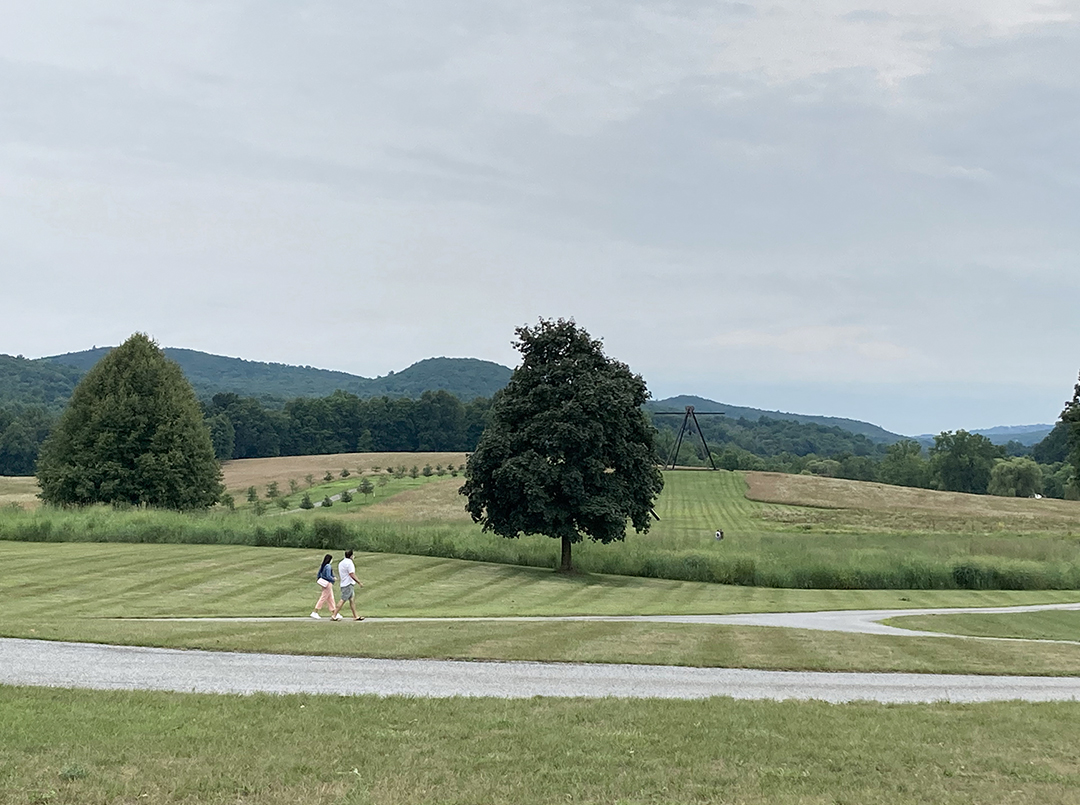 Sculpture gardens today are popular cultural venues, but things were different in the 1960s when Storm King was built. And Storm King, surrounded by the Hudson Highlands and Hudson River, occupies more than 2 million㎡, about 1.4 times the size of the Olympic Park in Seoul. The art center was well ahead of its time, recognizing the synergy effect created by nature and art that we so crave today. The name ‘Storm King’ comes from a nearby mountain.
Inspired by an Artist’s Vision
It all started with Ralph E. Ogden, head of Star Expansion Company, which makes metal locks used at home and construction sites. Ogden’s first connection with the area came in the 1950s, when the company relocated from New Jersey to Mountainville in Cornwall. The art center didn’t start out as an open-air venue, and it was much smaller at first. Ogden only wanted to exhibit romantic landscape paintings by artists from the Hudson River School. 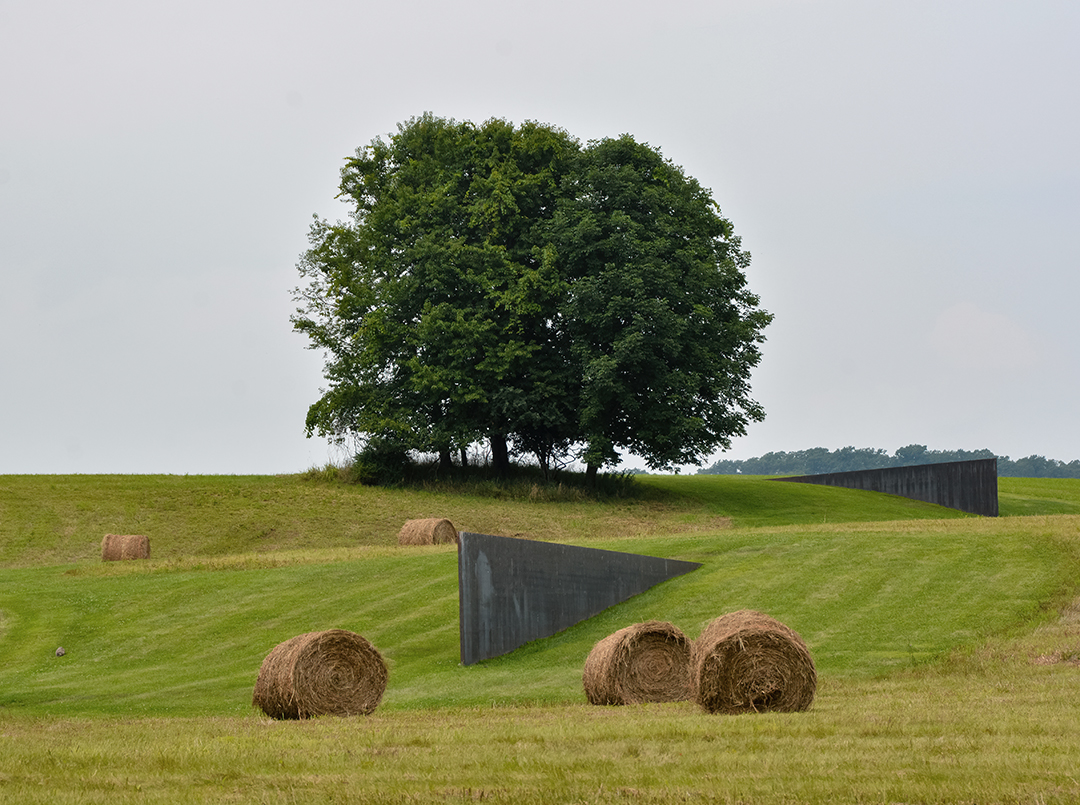 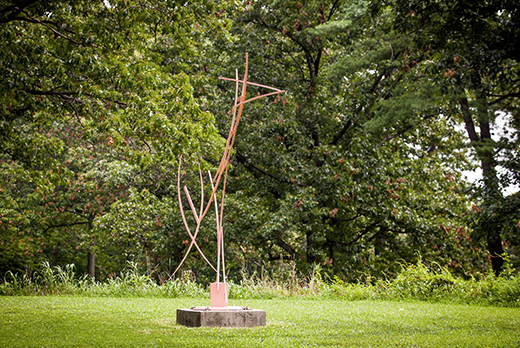 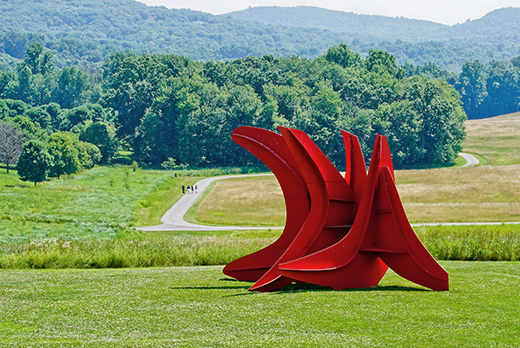 And the special moment of enlightenment and discovery by Ogden helped the art center expand. He visited the home of the artist David Smith, who had been working on abstract sculptures as free as paintings. Moved to secluded Upstate New York from busy NYC art scene, Smith was using rough raw materials to create pieces that weren’t bound to any rules. As time went by, large sculptures started taking their places around his house and studio. Ogden visited the studio after Smith’s death, and he saw a whole new world open up as he viewed sculptures that blended in with their natural surroundings. Ogden purchased 13 sculptures by Smith, and turned his nascent art center into a large open-air museum. It was 1967. 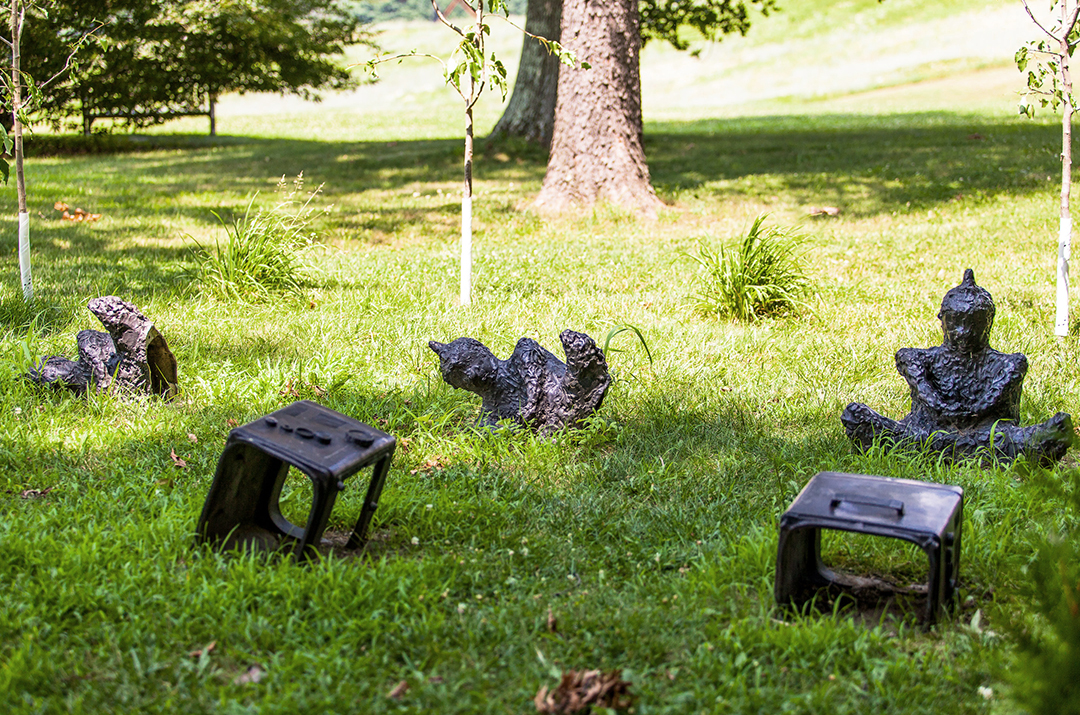 Land Art in Extraordinary Scale
Ogden, who kept expanding the collection at Storm King, told his son-in-law and co-founder, H. Peter Stern, “I’m having so much fun, and when I die you’ll have this kind of fun in a more prominent role.”
And that became his will. Stern, who had been in charge of administration at the art center, oversaw Storm King’s transformation into a prominent public museum after Ogden’s passing in 1974.
Stern teamed up with David Collens, director and chief curator at the art center, to run site-specific art commissions programs, covering land art and public art. Pieces by such artists as Isamu Noguchi, Richard Serra, Andy Goldsworthy, Nam June Paik and Maya Lin found their ways to Storm King, all of them uniquely symbolic to this art center. For instance, Paik’s ‘Waiting for UFO’ (1992) has been installed on grass near Storm King’s Museum Hill. It is one of rare outdoor sculptures by Paik. He handpicked soft spots to place three pieces of Buddha, each watching TV in different poses. Paik’s insight and sense of humor are rendered more permanent and comforting in the natural setting.
‘Storm King Wavefield’ (2007~2008) by the land artist Lin boasts an unparalleled scale of Storm King. The wavefield consists of undulating waves of grass and earth. Strolling along those swells, twice the height of a typical adult man, gives you a unique sensation of being in the ocean. Lin is also famous for designing Vietnam Veterans Memorial in Washington D.C. 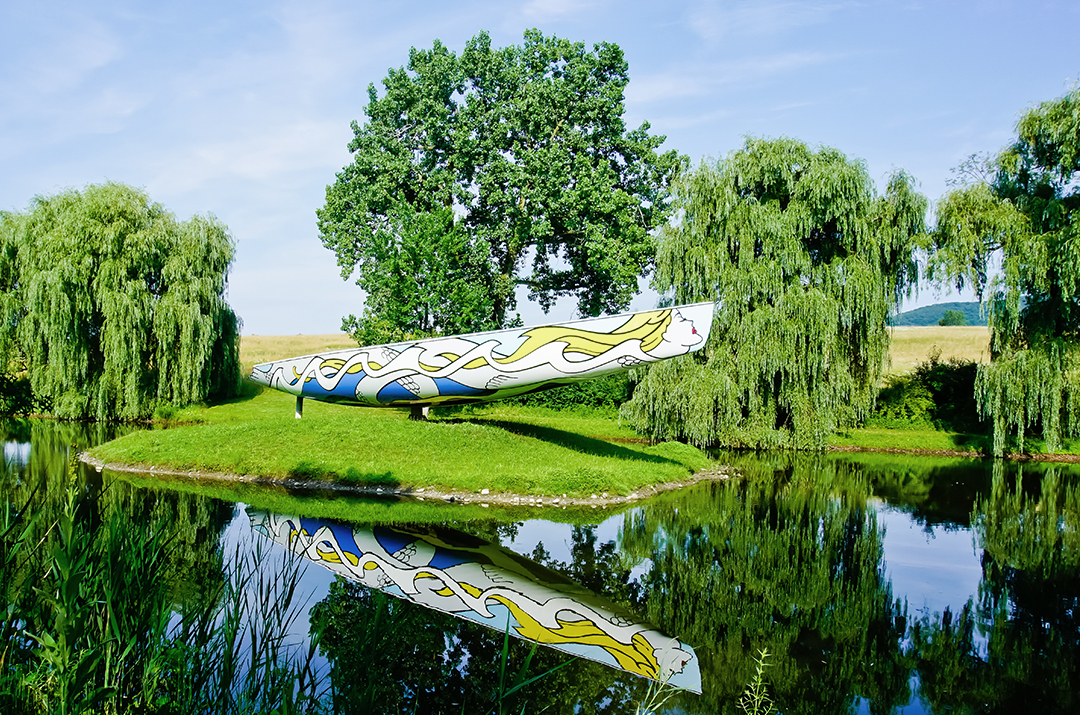 60th Anniversary and New Beginning
Storm King, which displays permanent collections and hosts traveling exhibitions, has more than 110 pieces of work available for viewing on average. Stern, the co-founder, once said, “I have such a strong feeling about giving everything space, of putting sculptures in relationship to everything else. And of not overdoing things.” When a tree grows and changes the backdrop, some sculptures are relocated. At Storm King, they always try to find just the right place for art works where they can truly resonate with the audience.
Since 2008, Stern’s son, John P. Stern, has been in charge. Storm King celebrated its 60th anniversary last year, and it’s about to take another huge step forward this summer. It’s about to unveil monumental pieces by two of the most important contemporary artists today. There will also be a new permanent, site-specific commission, considered the heart of Storm King. It’s ‘Fallen Sky’ by Sarah Sze, who represented the U.S. at the Venice Biennale and received a MacArthur Fellowship, an honor only reserved for the best of the best. 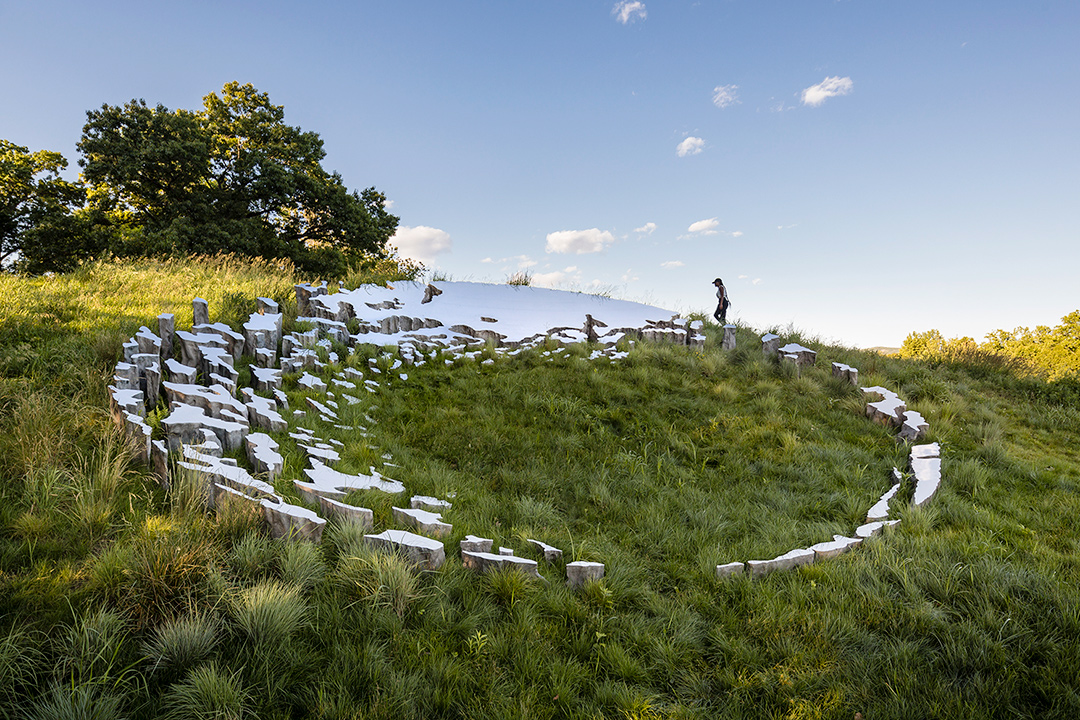 Sze’s piece is comprised of an 11-meter-diameter spherical cavity, once occupied by a large tree. Sze inserted 132 individual elements with surfaces of mirror-polished stainless steel. It created an entirely new landscape while at the same time reflecting its surroundings. Inside the museum is another site-specific commission by Sze, titled ‘Fifth Seasons.’ With those two projects, Sze discusses the way in which we recognize and interpret nature.
The second contemporary artist is Rashid Johnson, a leader of the conceptual post-black art. His installation, ‘The Crisis’ (2019), exudes different feels as its surroundings change season to season, demonstrating subtle tension between the nature and the artificial structure. 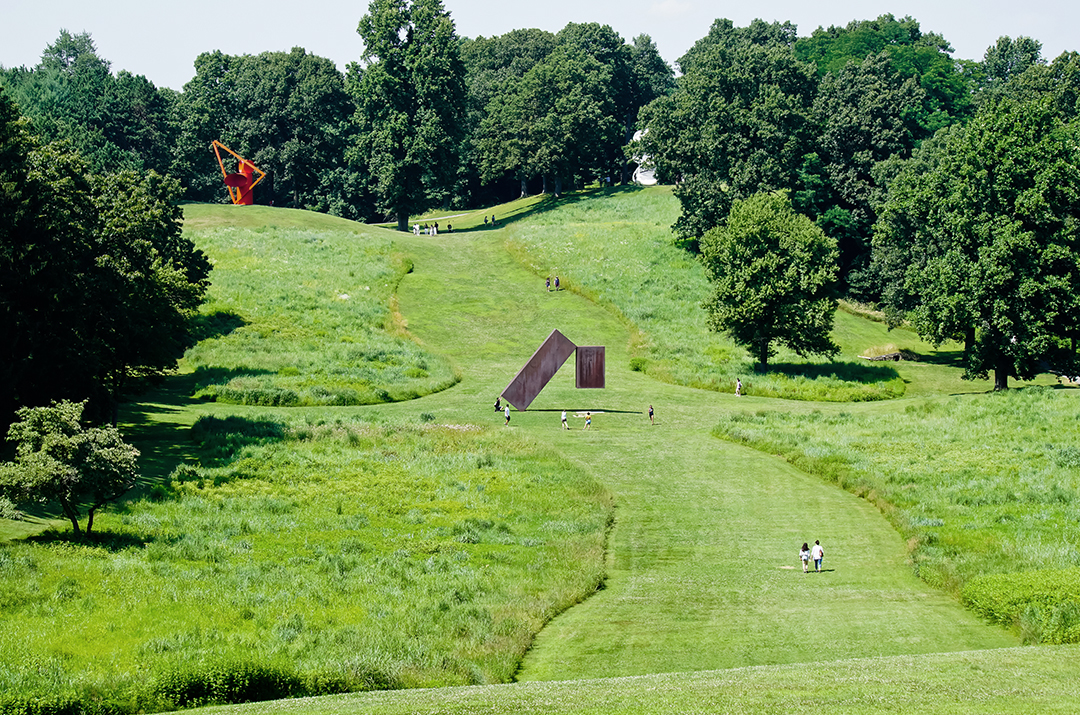 How to Reach Storm King Art Center
In addition to driving to Storm King, you can also take public transit from Manhattan, such as train or bus. You can sign up for a tram ride or rent a bike at the museum. You must purchase your ticket online in advance. 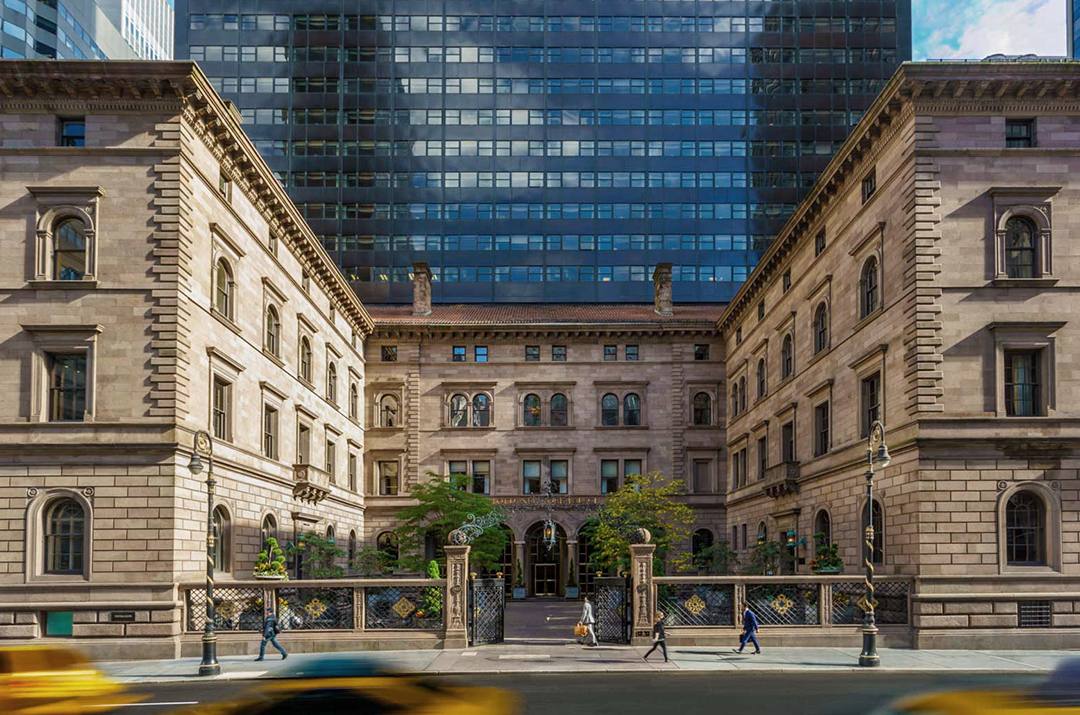 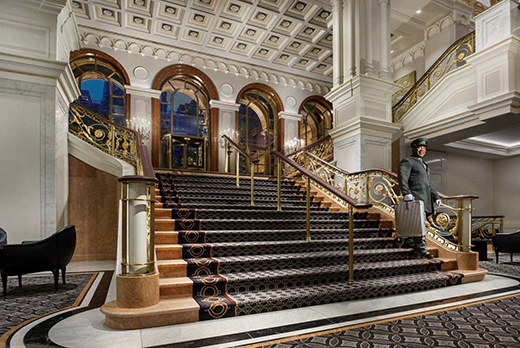 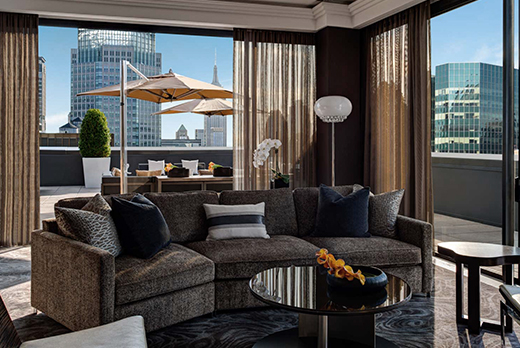 Where to Stay in New York: LOTTE NEW YORK PALACE
LOTTE NEW YORK PALACE is housed in the late-19th century mansion built by the financier Henry Villard, while also featuring a 55-story modern tower. Having appeared in the popular U.S. TV show and several other films, the hotel has become a must-stop destination in New York. It has 909 rooms, plus a beautiful courtyard inspired by the 15th century Italian cathedral, restaurant Villard, luxury salon Rarities and cocktail bar Trouble’s Trust.