Joy of Paddling, Seattle Kayaking
Nestled in the Pacific Northwest of the United States, Seattle presents an abundance of benefits offered by numerous waterways that include the bays, lakes, and canals in the coastal region. Skipping paddling during a Seattle trip is like missing out on the greatest adventure the city can provide. Have a kayak out on the calm water and enjoy your all-new Seattle experience.
Seattleites like to head out to lakes or bays when it is sunny and breezy. They grab a paddle even for a short while after work on weekdays, not to mention on weekends. Paddling is one of the most approachable leisure activities enjoyed by the locals, along with kayaking, canoeing, and stand-up paddleboarding. A kayak, in particular, is popular among beginning paddlers because its paddle is easier to handle than that of a canoe, and also because it is easier to maneuver.
The difference between canoe and kayak is straightforward. In kayaking, a double-bladed paddle works the two sides of the boat to propel it. A kayak is also narrower in width, lighter, and easier to transport than a canoe.
If you are a beginning kayaker, try joining a guided tour program available at boat rental shops. They will give you instructions on the basic paddling skills, safety information, and the most ideal paddling routes in the area. Sunset tours held against the backdrop of cityscapes are popular. Most rental shops provide weather forecasts on their websites (it is best to avoid an extremely sunny or windy day), and offer life vests as part of the basic package.
We looked into some of the best-known kayaking spots in Seattle, for your first successful paddling experience. 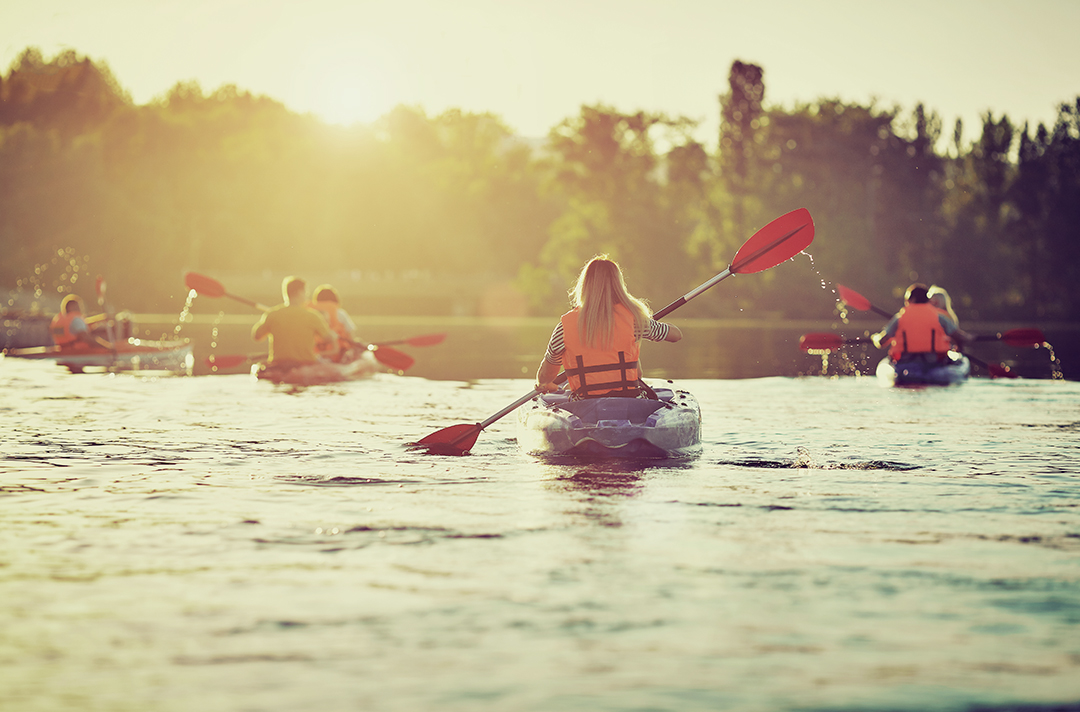 Kayaking in Urban Center, Lake Union
Adjacent to downtown Seattle, Lake Union provides paddlers a beautiful skyline view of the city. One of the more popular destinations around the lake is the houseboat community. The eastern and western shores of the expansive lake are lined with houseboats of all sorts and charms. One of the houseboats will seem familiar as it was featured as the one where actor Tom Hanks resides with his son in the movie . There are two ways to travel to other areas from Lake Union by paddling. You can either paddle toward Puget Sound and go through Ballard Locks, one of Seattle’s most popular visitor attractions, or you can head east toward Lake Washington and check out Portage Bay and Union Bay.
Kayak rentals and guided tours: Northwest Outdoor Center 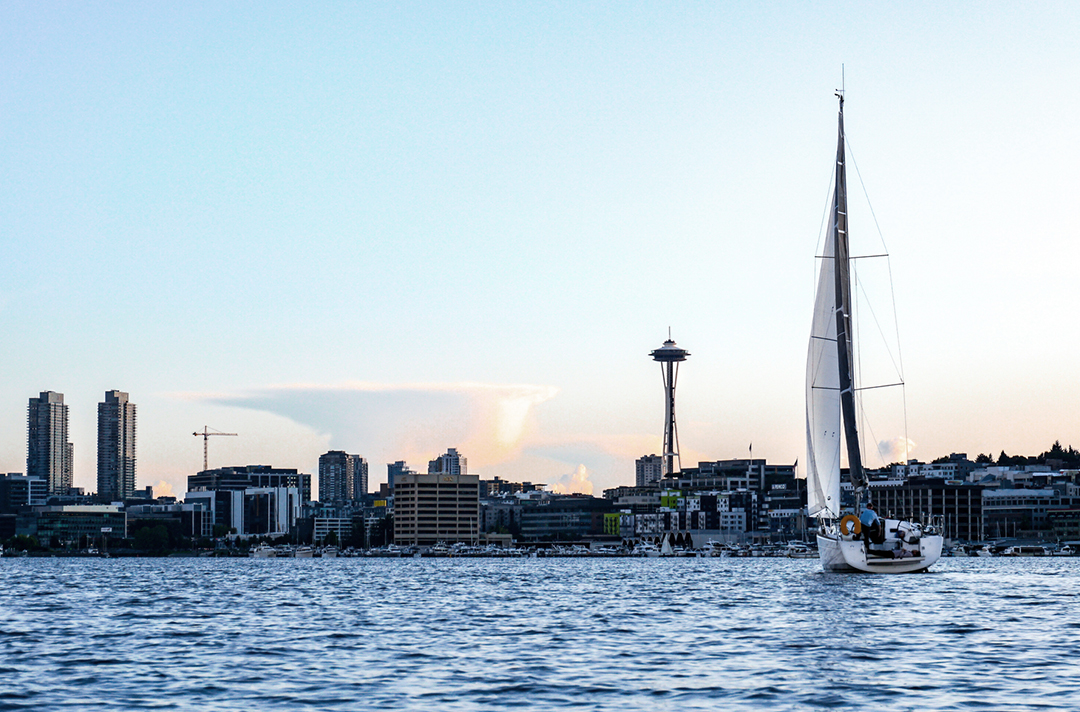 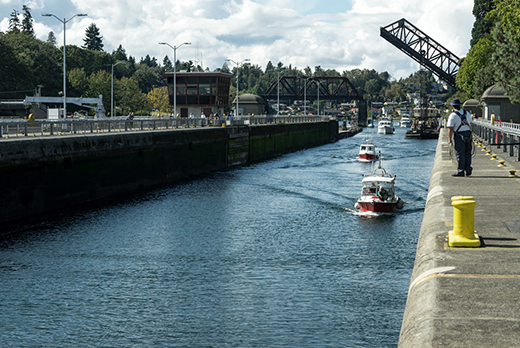 Ballard Locks, which help control the water level of the ocean and the fresh water, are among the major Seattle landmarks. You can kayak your way past them. © Visit Seattle/Alabastro Photography 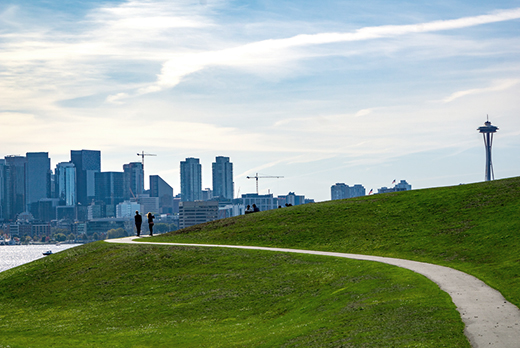 Hidden Gems, Portage Bay and Union Bay
What makes Seattle so special is the coexistence of the city’s progressive atmosphere and primitive surroundings. The sure-fire way to enjoy that aspect of Seattle is to paddle along Portage Bay and Union Bay. With a length of 35km, Lake Washington, which is connected to Union Bay, is the largest lake in King County where Seattle belongs. The two bays are close to the University of Washington, as well as the Washington Park Arboretum which is appreciated by the locals. Paddling along the shore of the arboretum gives a sense of security and protection as the water is enclosed with islands. You may spot wildlife such as American eagles and beavers as you peacefully row your way in between large floating leaves of waterlilies.
Kayak rentals and guided tours: Agua Verde Paddle Club, Waterfront Activities Center 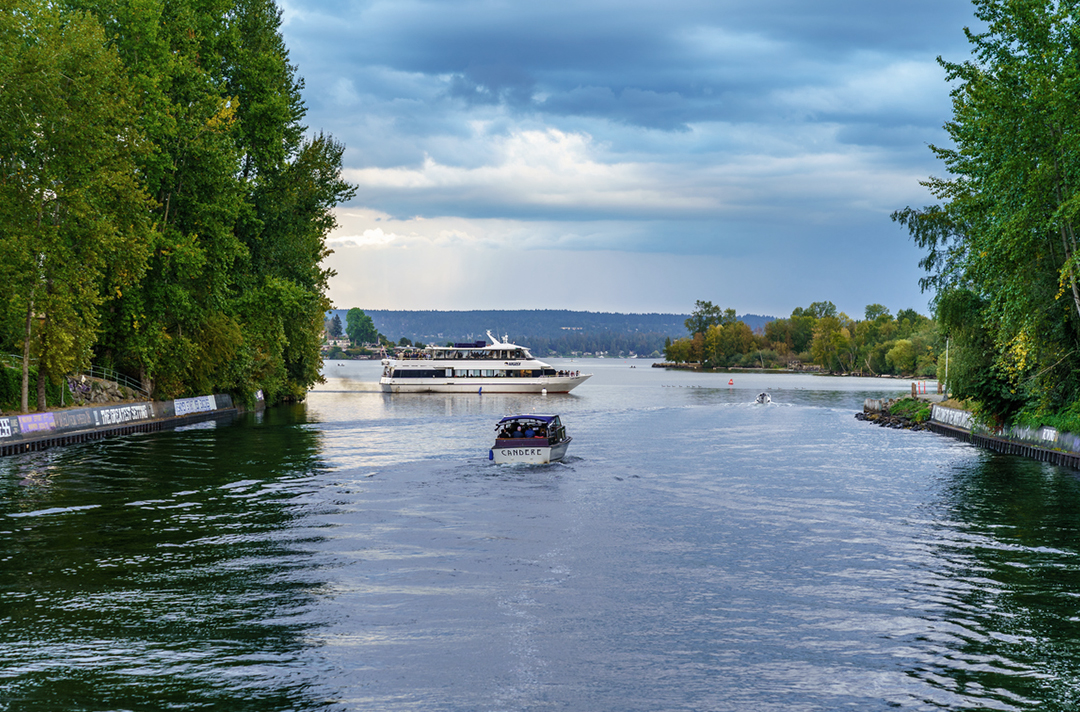 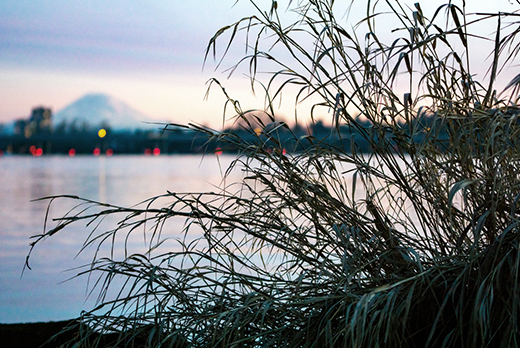 You can see many different types of birds at Union Bay. Mt. Rainier comes into the view from the northwest. © Visit Seattle/Alabastro Photography 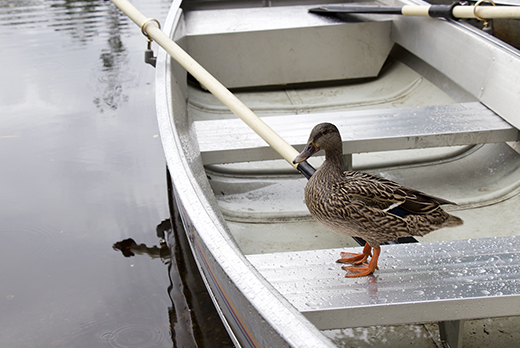 Popular Among Beginners and Families: Lake Washington
Lake Washington, located between Seattle and Bellevue, has a relatively gentle wave compared to other paddling sites. To the northwest, you can see the Issaquah Alps and Cascade Mountains. On a clear day, you can even see Mount Rainier. The expansive lake offers a number of departure points for paddling trips. Sail Sand Point, a business that rents sailboats as well as kayaks, chose Magnuson Park in northeastern Seattle. Magnuson Park is the second largest park in Seattle after Discovery Park. Its wetlands provide habitat for 170 bird species including black-capped chickadees and Anna’s hummingbirds. Popular outdoor brand REI Co-op has its paddling courses departing from Bellevue. Its kayak tours include ‘First Light Kayak Tour on Lake Washington’ and ‘Urban Wetlands Kayak Tour,’ both departing from Enatai Beach Park.
Kayak rentals and tours: Sail Sand Point, REI Co-op 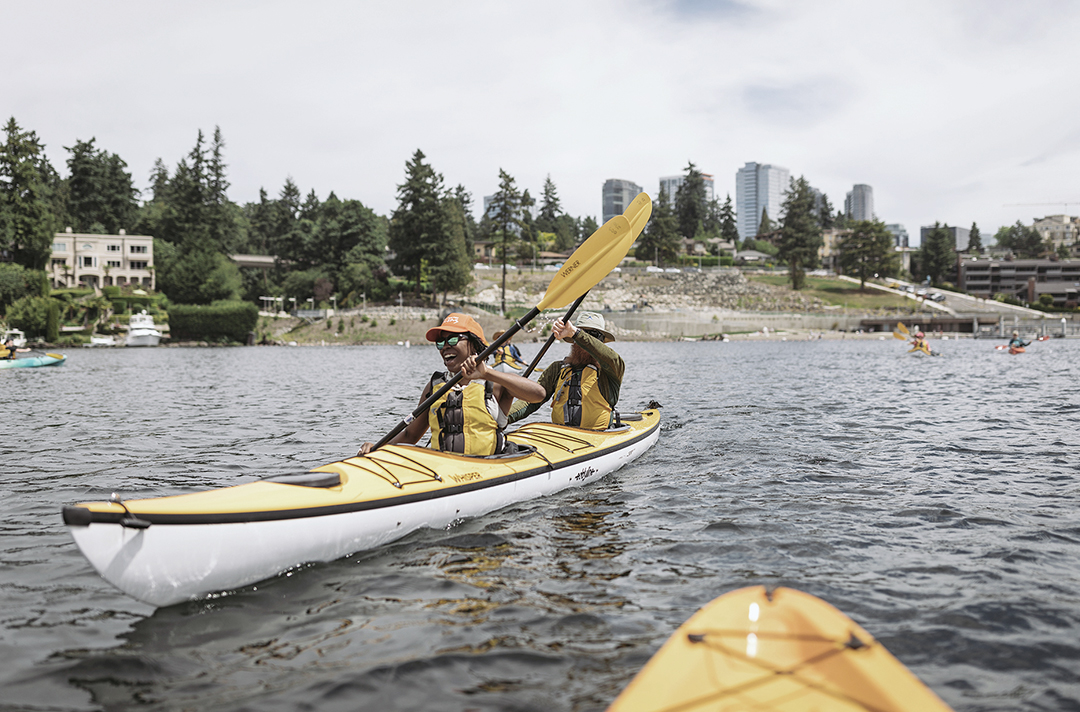 Thrills of Sea Kayaking, Elliott Bay
Elliott Bay is part of the basin of Puget Sound where you could truly understand the charm of sea kayaking. One of the best-known departure points is Alki Beach. It is the locals’ favorite vacation spot, almost comparable to the famous Coney Island of New York City. The greatest advantage Elliot Bay offers is the view of amazing and unique Puget Sound sceneries. In front of the bay are Olympic Mountains and diverse islands, while there is Mount Rainier in the back. The further you go in from the shore, animals are less scared of the intruders. Wild sea lions, harbor seals, ospreys, and otters appear more frequently. Alki Kayak Tours, a local kayak rental shop, operates various tour programs such as ‘Alki Lighthouse Sea Kayak Tour’ and ‘West Seattle Sunset Sea Kayak Tour.’
Kayak rentals and tours: Alki Kayak Tours 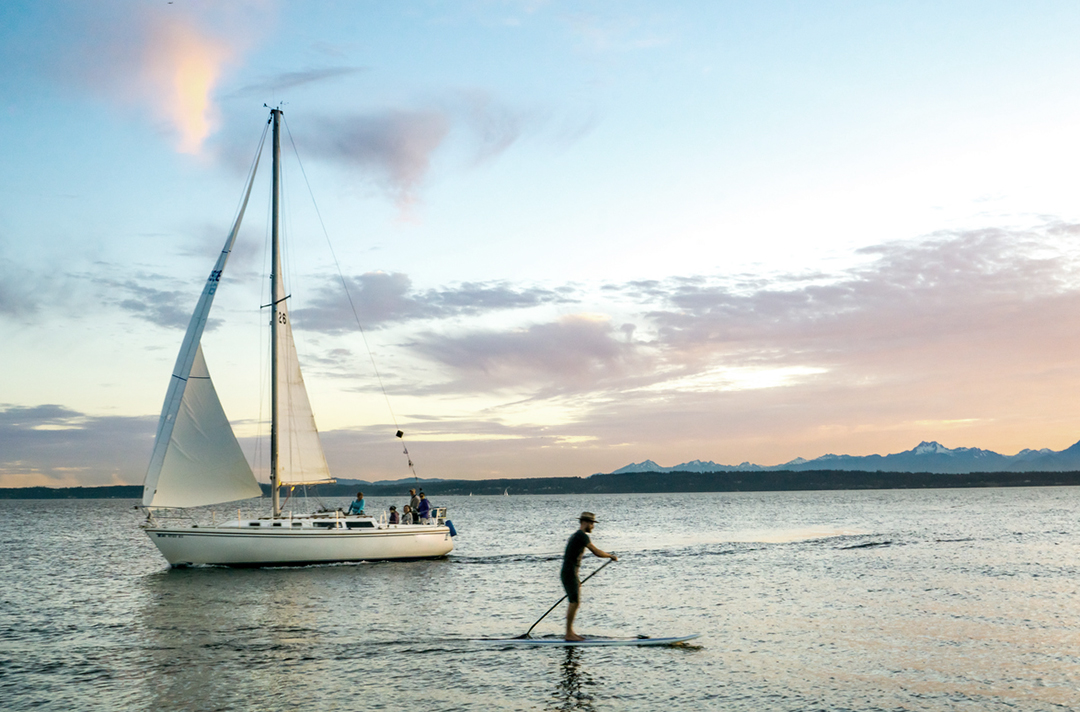 Shilshole Bay and Puget Sound, to the northwest of Seattle. © Visit Seattle/Alabastro Photography 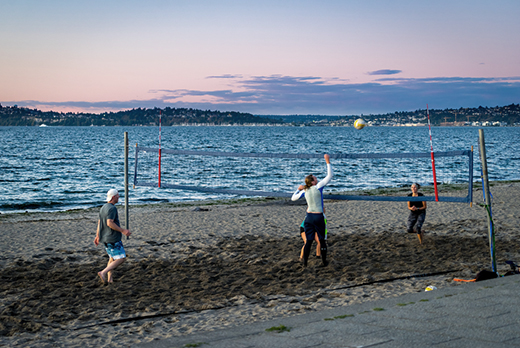 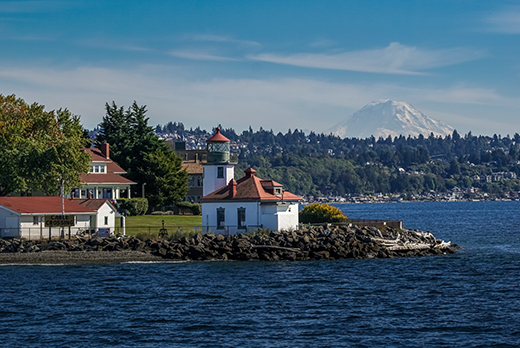 Kayakers’ Dream, San Juan Islands
San Juan Islands are located rather far from Seattle, and a day trip is not feasible unless you get on a hydroplane. Having said that, San Juan Islands are still worth mentioning because it is considered the mecca of kayaking on a global level. The 172 islands present epic scenes featuring the vast Pacific Ocean in the northwestern tip of the United States, snow-covered peaks and ranges, and the humbling natural landscapes. The region offers one of the most diversified ecosystems in the world. Particularly, it is known for its whale watching. Starting with orcas, famously featured in the movie and recognized for their black bodies and white patches around the eyes, there are humpbacks, porpoises, and minke whales in the waters off Seattle.
Kayak rentals and tours: San Juan Outfitters 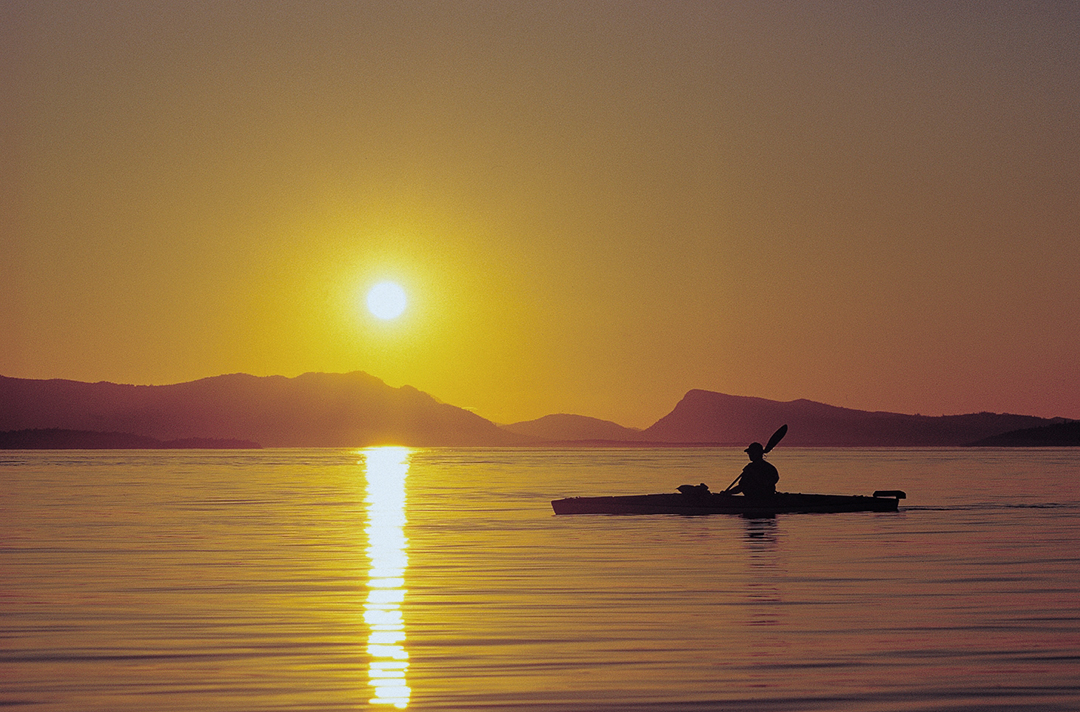 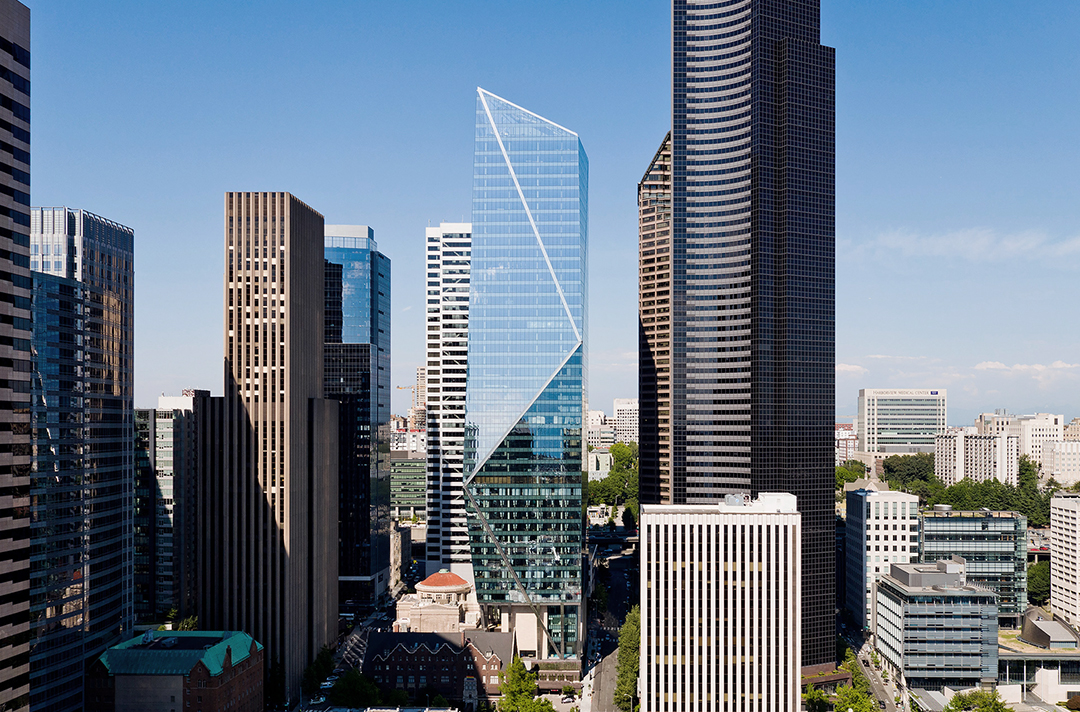 Where to Stay in Seattle: LOTTE HOTEL SEATTLE
Opened in September 2020, LOTTE HOTEL SEATTLE is located in the 44-story building on 5th Avenue in Midtown, Seattle. The hotel’s glassy facade mirrors sunlight and the surrounding downtown area. Creative designs with a modern flare used in 189 rooms and suites were inspired by the beautiful landscape the city offers. Near the hotel are some of the major tourist destinations including Space Needle, Pioneer Square, and Pike Place Market. LOTTE HOTEL SEATTLE is a rising landmark of the city suitable for both business travelers and tourists.