Dynamic Spaces Enthrall Gen MZ
Haus Dosan and Peaches D8ne. These are the places that attest to the kind of space created when artistic brands are given free rein to unleash their inspirations.
Seoul is a city where brands engage in fierce competitions to survive without falling behind the lifestyle trend that closely affects contemporary men. The sheer volume of information and cultural diversities that are overflowing in the city result in constant stimuli, and it is becoming harder and harder for individuals to express and maintain their own emotions. When it seemed there were hardly any new ideas, Haus Dosan and Peaches D8ne opened. 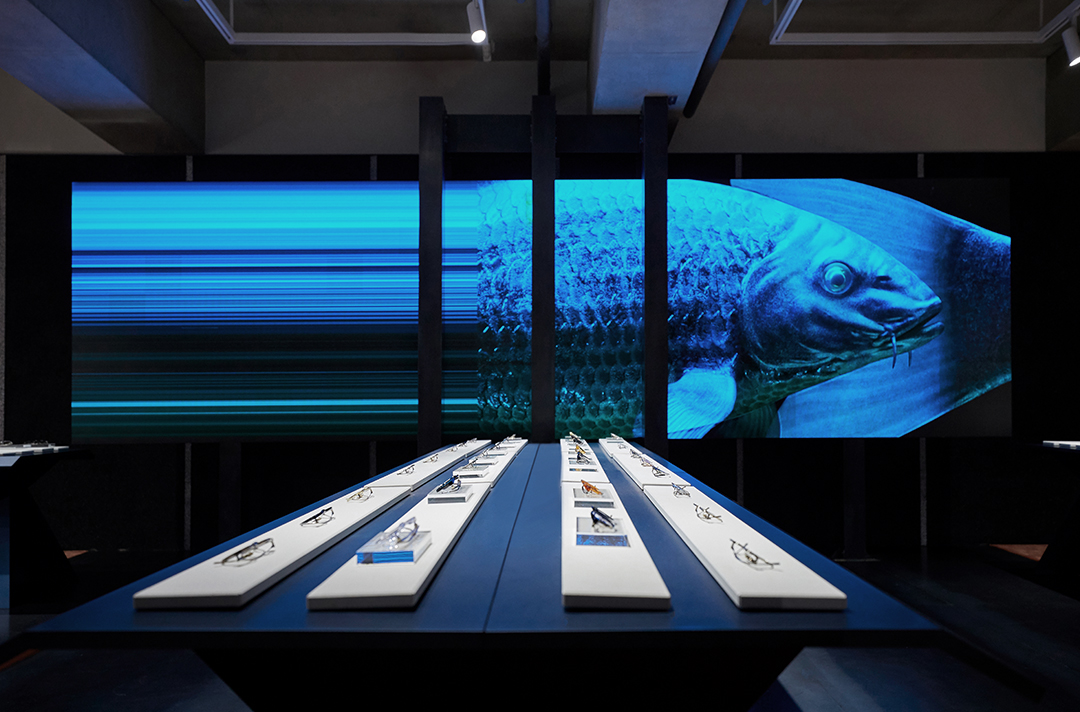 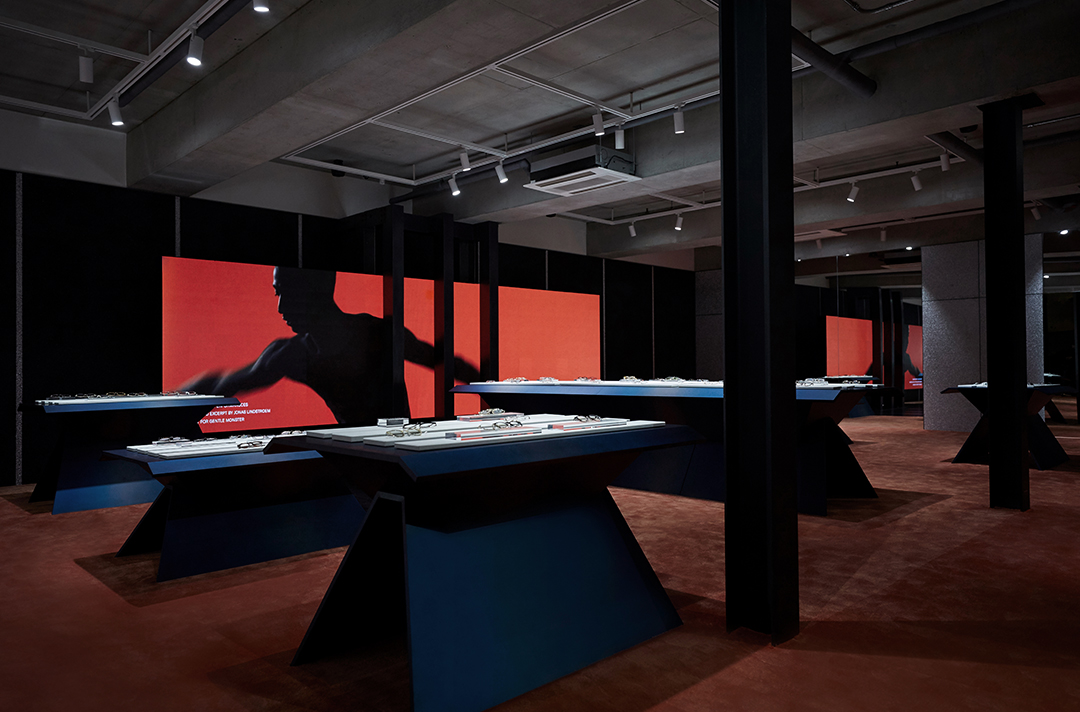 You’re Invited to the House of Monsters
A house reflects the personality of a person who lives in it. Haus Dosan, in which ‘haus’(German word meaning ‘house’) is used, is no exception. It is a flagship store of IICOMBINED which owns eyewear brand ‘Gentle Monster.’ As the name suggests, Haus Dosan is a state-of-the-art house featuring creative works that are both innovative and futuristic. ‘Gentle Monster’ and its family brands ‘Tamburins’, specializing in cosmetics, and ‘Nudake', a dessert maker, occupy the five-story building together.
Considered an assorted gift basket built by the creators of the Gentle Monster flagship store which is known for its ambivalent identity brought on by its resemblance to an art gallery, Haus Dosan is the first project launched by IICOMBINED on the theme of ‘UNOPENED: FUTURE.’ There are neither practical nor ordinary objects at Haus Dosan. Instead, through a series of installations in places, you can simply see the future unfolds before your eyes. 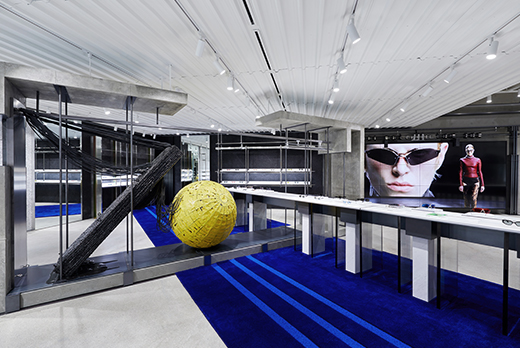 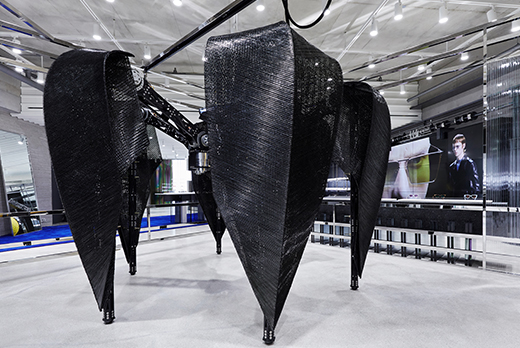 The giant six-legged walking robot, built by Gentle Monster’s Robotics Lab, can be found at the center of the third floor. © Gentle Monster 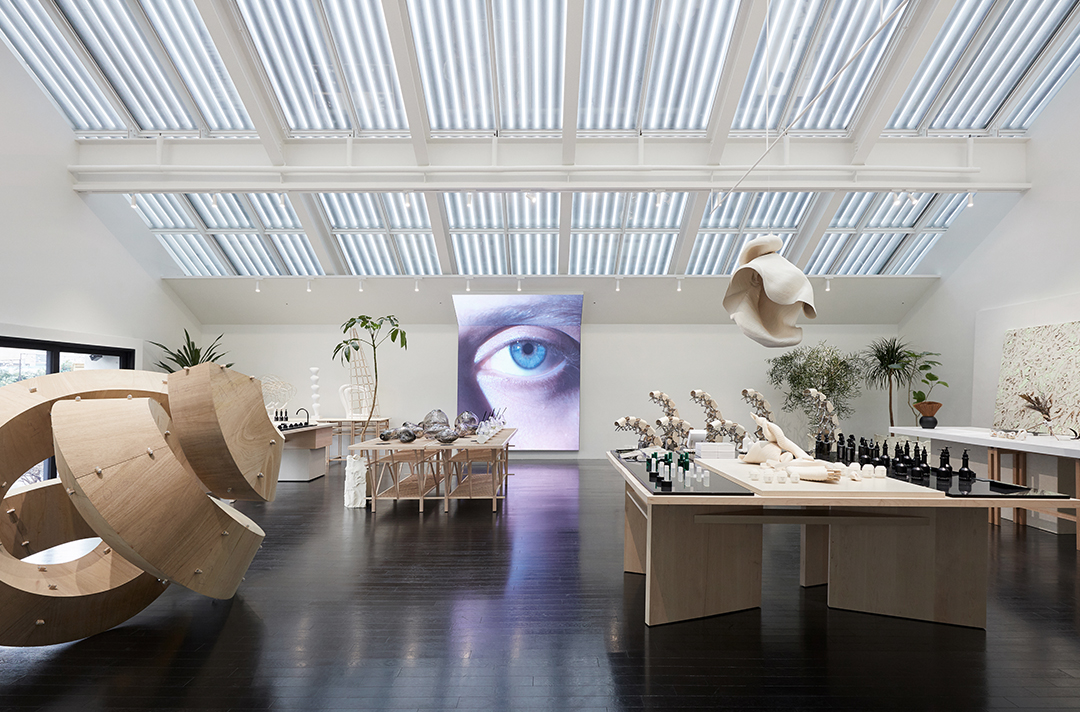 Encountering Future at Haus Dosan
In the center of the 3rd-floor display stand filled with Gentle Monster sunglasses is a 2m-tall six-legged walking robot named ‘THE PROBE.’ The 4th-floor flagship store of Tamburins, the second of its kind, presents a kinetic object that swings back and forth, just like reeds. They are the fruit of a year-long research and development by Gentle Monster’s Robotics Lab. As robots naturally merge with the surrounding interior design, they evoke a unique appreciation of the scene.
Also worth noticing are installations made in collaboration with talented international artists. In the middle of the first-floor ruins is an installation by Belgium-born multimedia artist Frederik Heyman, who worked with Gentle Monster in 2019 for a campaign production. On the second floor is a media art by photographer and director Jonas Lindstroem who is active in London and Berlin. Meanwhile, the first floor has a vibe of the ruins left after an alien attack, overthrowing the common idea regarding what flagship stores look like. Even that is considered a typical Gentle Monster move. 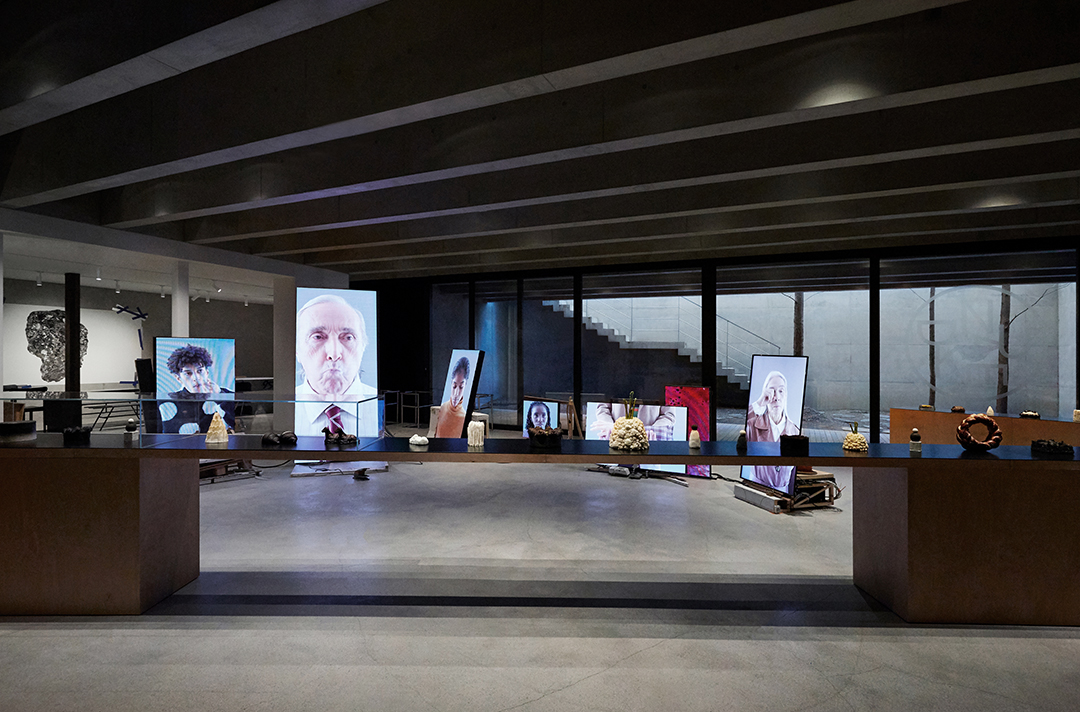 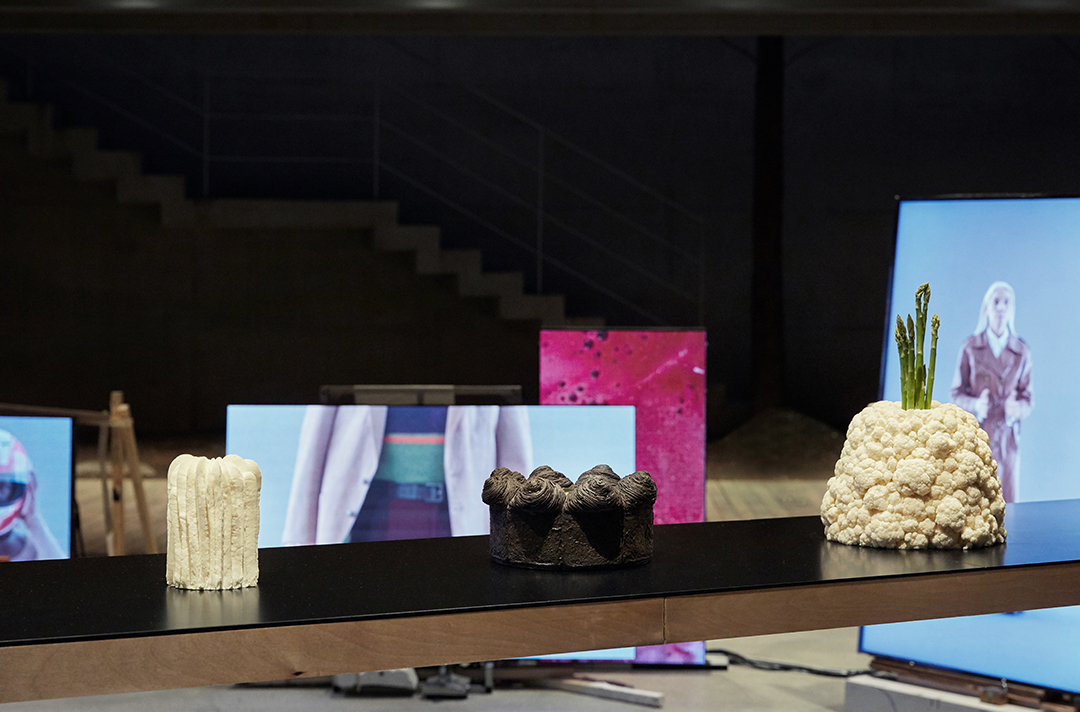 Art or Toys? Desserts!
Before the opening of Haus Dosan, pictures of Nudake desserts created a buzz on social media with their unique shapes. Through word of mouth, people quickly learned that you can actually buy those desserts, which once seemed like a one-off event, at Haus Dosan. The first flagship store of Nudake is located on the B1 floor of the building. Nudake offers one-of-a-kind desserts under the slogan ‘Make New Fantasy.’ Its Peak Cake has a volcanic design, meaning if you cut the mountain-shaped cake in half, matcha cream will trickle down from the inside. Its croissants are named ‘Micro Croissants’ for their fingernail size and artistry. The entire dessert menu adheres to the concept of “You eat with your eyes first.” The desserts are delectable.
Don’t be upset that you can’t visit Haus Dosan. Fitting for a future-oriented brand, Gentle Monster has a 360° online viewing of Haus Dosan on its website. 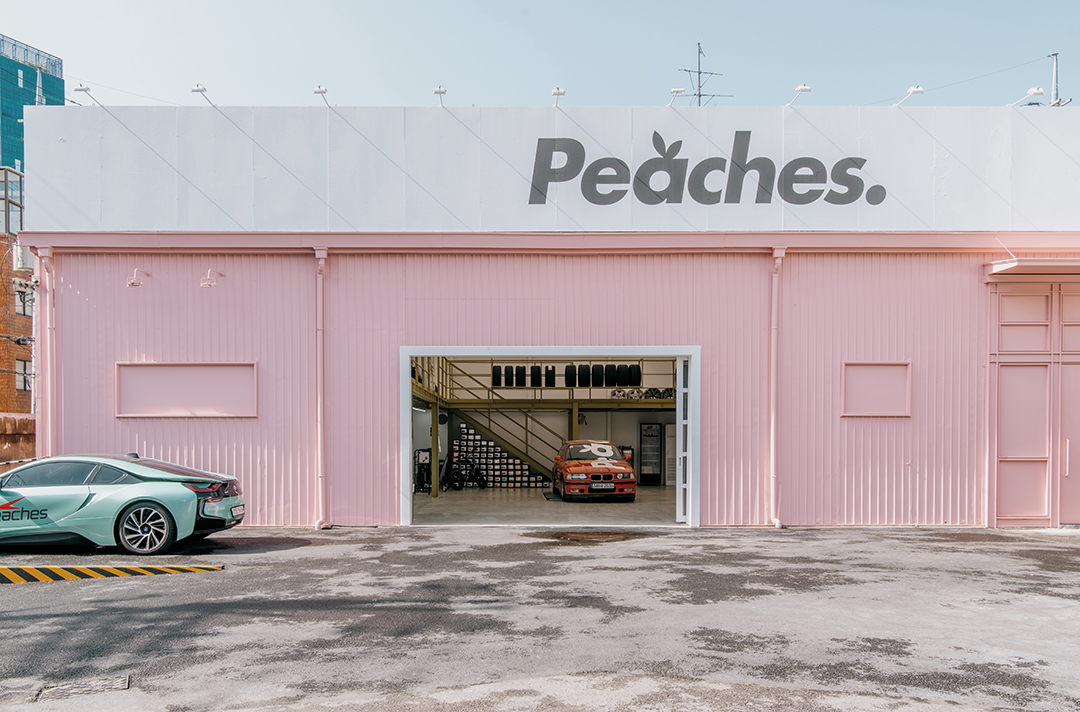 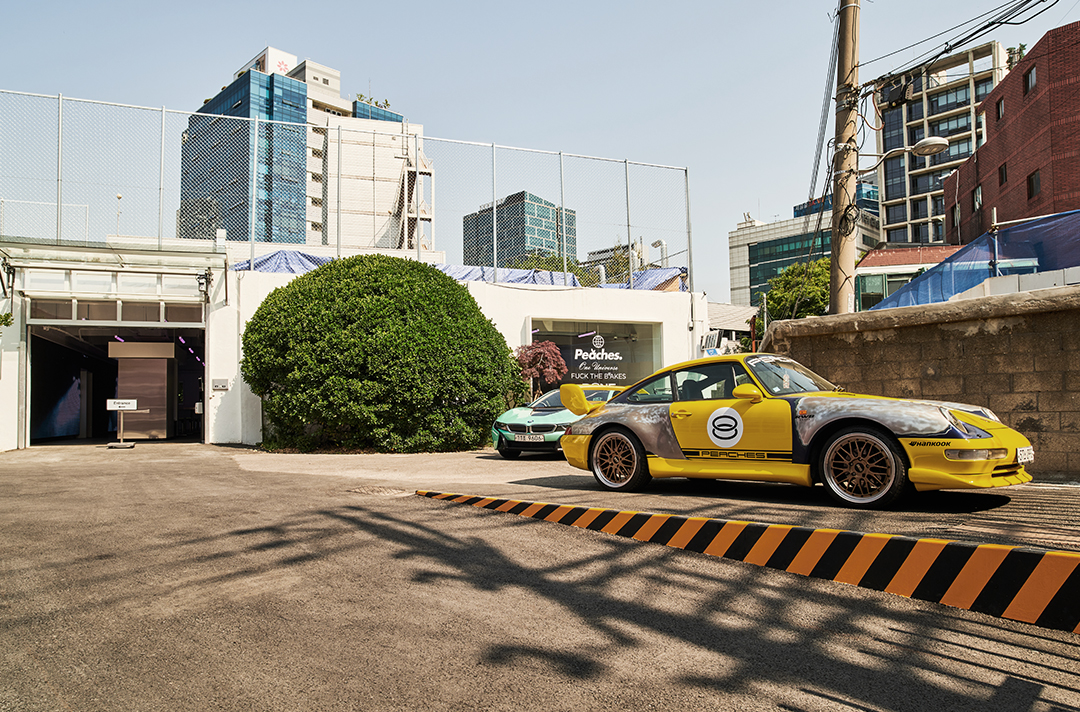 Tuned cars are on display on one corner. © Peaches

When a Car Becomes a Culture
Many people will choose Peaches as the hippest brand today without thinking twice. Peaches is a lifestyle brand based on the streetcar culture involving automotive tuning and racing. It is similar to Stussy and Supreme, the brands based on skateboarding, hip hop, and surfing cultures. The beginning of the brand was the opening of ‘@peaches_oneuniverse’ account on Instagram, using the motif of peaches describing a sleek posterior of a car. 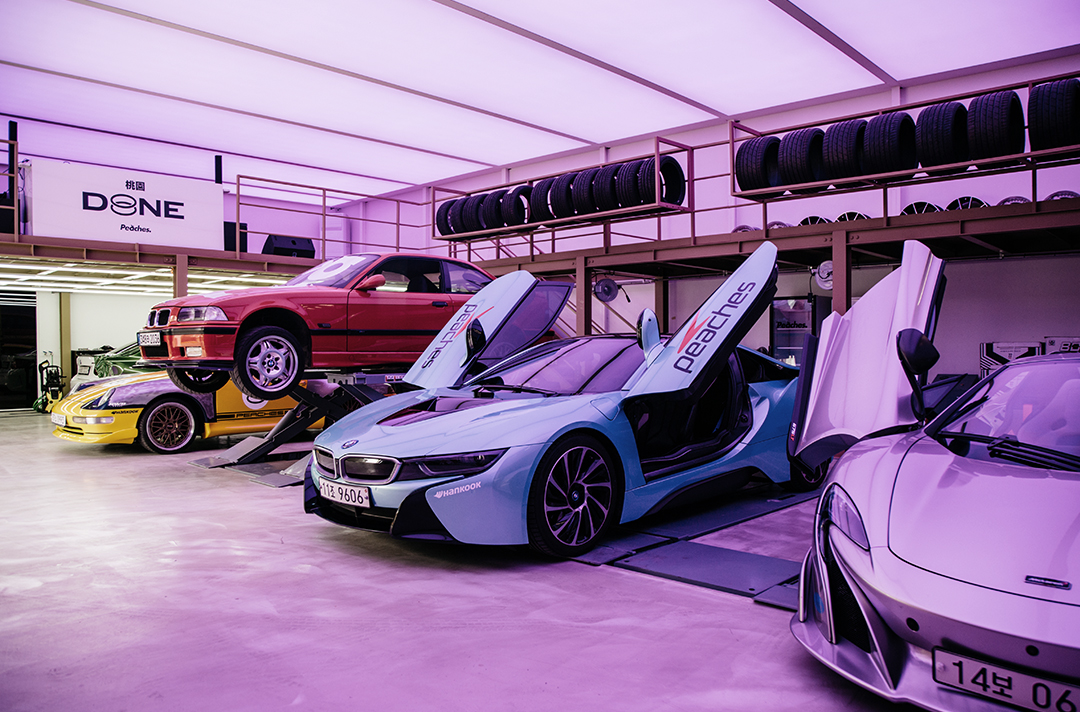 It’s not just car owners that are into Peaches. Currently, Peaches is run by artistic staffs including fashion designers, character designers, and musicians based out of Los Angeles and Seoul. Its automotive content borrowing elements of hip hop and fashion is captivating even in the eyes of Gen MZ of Korea where the streetcar culture has yet to flourish. Since April 2020, Peaches has been selling its own fashion items and car goods for a limited time every month on its website, and the inventory sells out quickly. 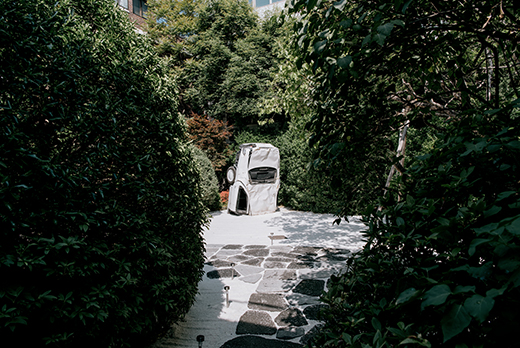 The garden at Peaches D8ne, resembling an outdoor gallery © Peaches 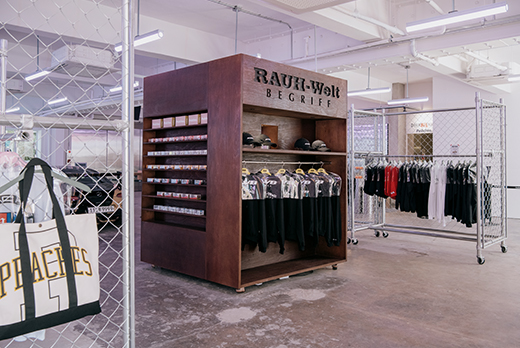 A select shop, with clothes and merchandise © Peaches 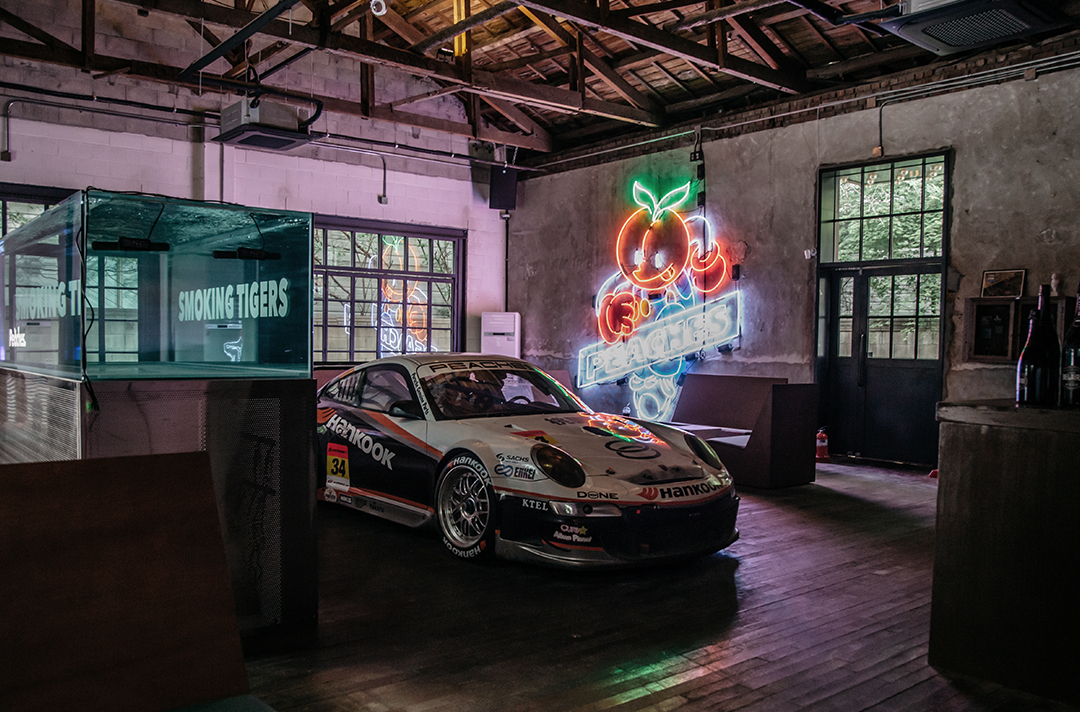 Hangout for Car and Peaches Fans
Pink-painted exteriors, and ‘Peaches’ written on it. If you came across this place accidentally during a stroll, and if you wanted to take a peek inside, your ‘hot place’ radar is working properly. It is Peaches D8ne, a rising cultural center in Seongsu-dong offering experiences and good food. It is the first offline location of Peaches and where the brand takes an actual form. Comprising diverse spaces such as a car styling garage, film and photo studio, gallery, car exhibit, outdoor garden for partying, and select shop. The place offers everything related to automobiles for car lovers. 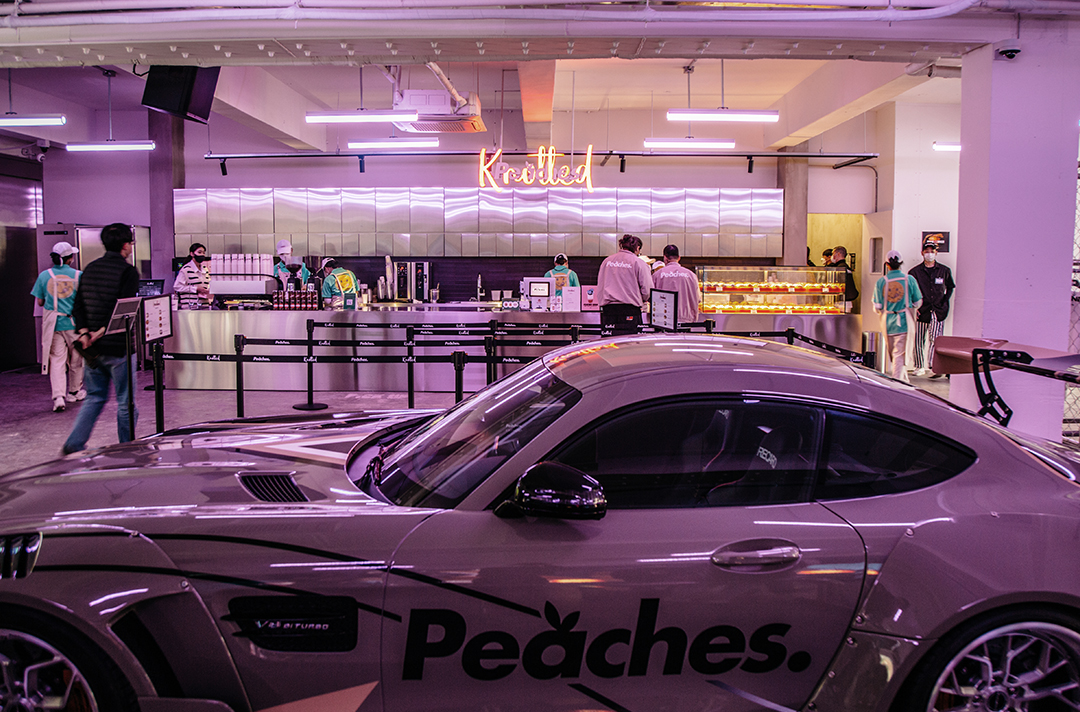 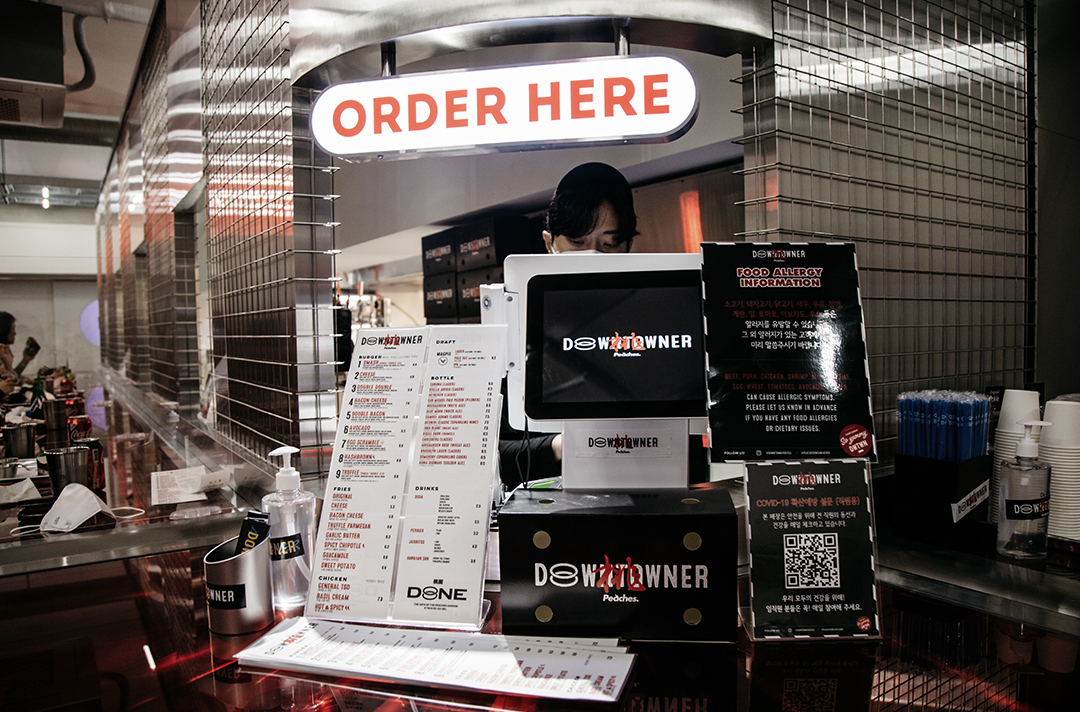 The Hottest in the Hip Neighborhood
Peaches D8ne is full of sensory entertainment. Cafe Knotted and Downtowner, known for donuts and homestyle burgers, respectively, operate business there. Peaches D8ne stands out in comparison to other places in that the shop interior and packaging designs also reflect the stylistic sensitivity of Peaches. Try a freshly-cooked burger at Downtowner and a creamy donut at Cafe Knotted. It’s your one-stop solution for dining and desserts. The cute bear-shaped ice in cold beverages at Cafe Knotted will give you a perfect Instagram photo opportunity.