Upcycling in Architecture, as Seen in LOTTE HOTEL Cities
Abandoned buildings across Korea have been transformed into art galleries, cafés and restaurants. We take you through these upcycled structures in Seoul, Sokcho, Jeju and Busan, all of them homes of LOTTE HOTEL.
Seoul | Gyedong Eeeat
‘Choi Pediatrics Clinic’ had opened in 1940 and the red brick building had run its course. Lee Seung-hwan, head of the food service branding and design studio EEOO, frequented Gyedong for its calm and peaceful ambience. He wondered why a building that so well represented Gyedong had been deserted, and at last decided he would build a restaurant there that could become a new landmark for the neighborhood. That is how ‘Gyedong Eeeat’ came to be in June 2020, serving as a brunch spot by the day and as a wine bar at night. 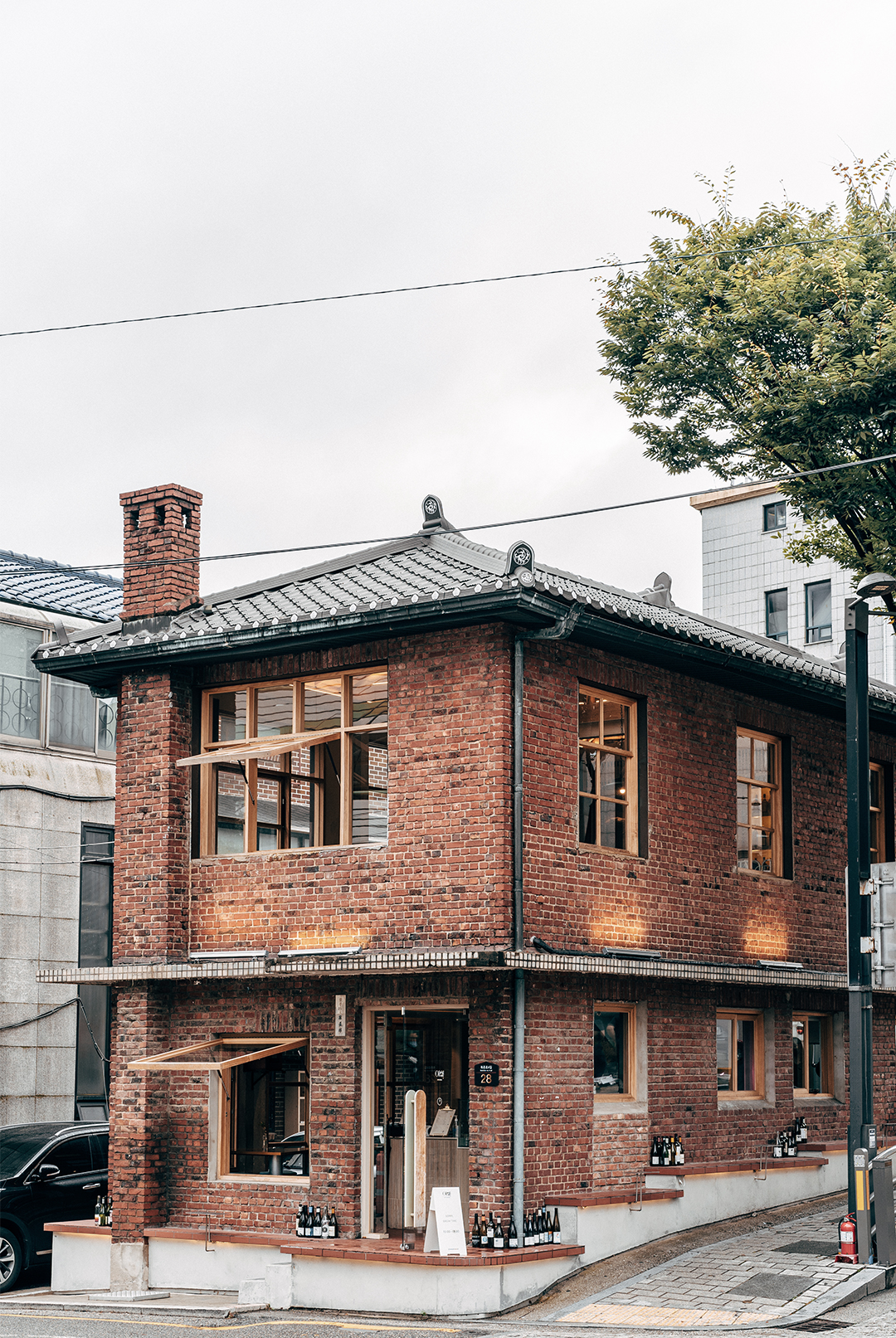 For the transformation of the building, Lee wanted to ensure the old pediatrics clinic building would be left untouched. “After Dr. Choi passed away in 2018, different lessors came in and put things in place that didn’t fit with the rest of the building at all,” Lee said. “This building stands in the heart of Gyedong. If it loses its unique identity, then it alters the ambience of the entire neighborhood. My focus was on helping people understand the distinctive feel of Gyedong through this building.” The same ‘giwa’ tiles and bricks from the 1940s provide a glimpse into the history of Gyedong, and the modern beauty created by EEOO is evident on the second floor. “During the day, the sunlight coming through these large windows lights up the whole place. Then by night, lighting illuminates both inside and outside,” Lee said. “This catches eyes of the people walking on Gyedong streets. There is only the physical boundary between the restaurant and the street on the outside. There’s no emotional wall.” 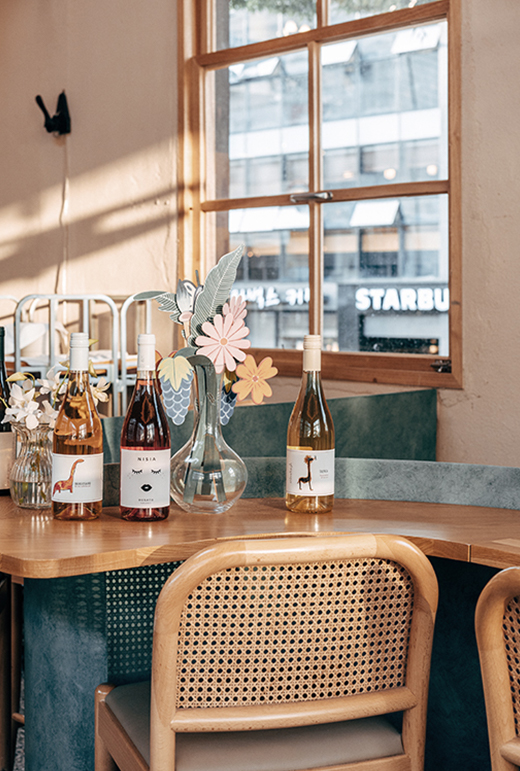 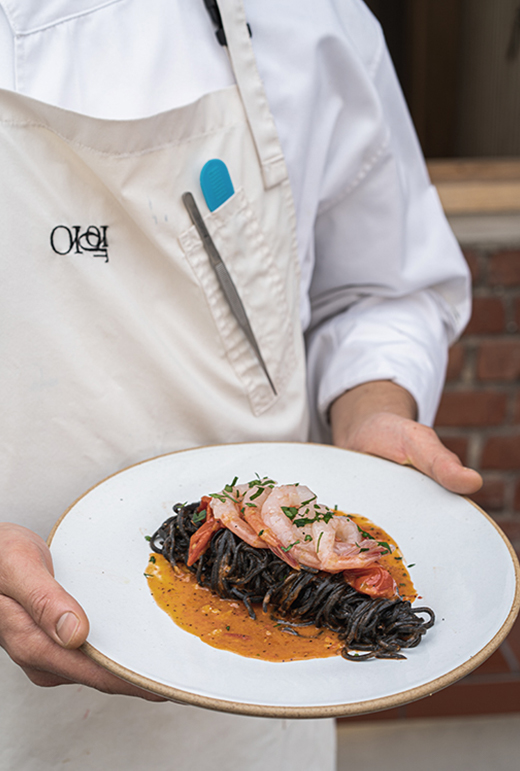 Lee added that he hoped Gyedong Eeeat would grow into a place where people can share their feelings and thoughts over delicious food and wine. How about spending a special night out over wine at Gyedong Eeeat and enjoying its classic charms? We recommend oyster for an appetizer, followed by ‘sweet shrimp oil pasta,’ with homemade ink noodle.
Address 28 Bukchon-ro 4-gil, Jongno-gu, Seoul
Inquiry +82-70-8865-2255
Instagram @eeeatseoul

Sokcho | Chilsung Boatyard Salon
In 2018, the front yard of a shipyard facing Lake Cheongcho hosted a music festival. Young people in the audience danced to the music and sang along. So how did a shipyard that has stood in the same spot for over 60 years become a must-see place in Sokcho and serve as a community for the local culture? Choi Yun-seong, who studied wooden shipbuilding in the U.S. and returned to Sokcho in 2013 to help his father, said there wasn’t a particular turning point. “People weren’t hauling in as much fish, and fishermen were getting old. For whatever reason, it was getting difficult to stay in the shipbuilding business,” Choi said. “We tried to shift our focus to building leisure boats, but things didn’t go our way. So it was time to fold, and I finally persuaded my parents to repurpose the building to what it is today.” 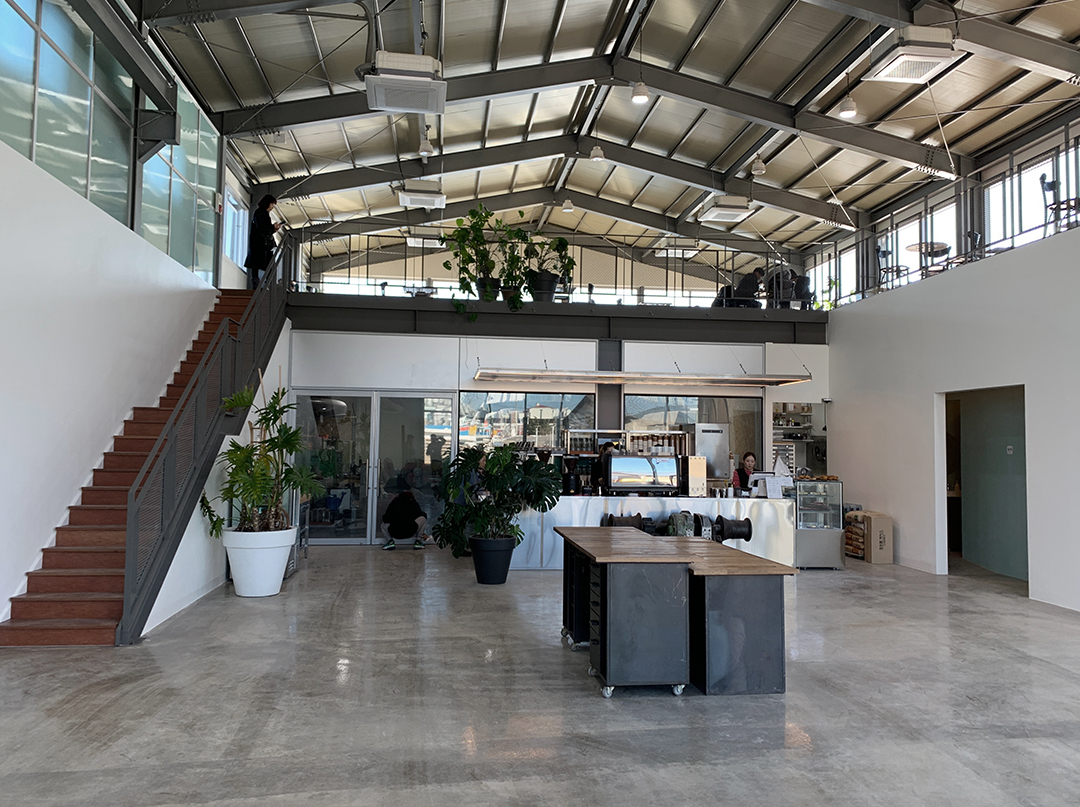 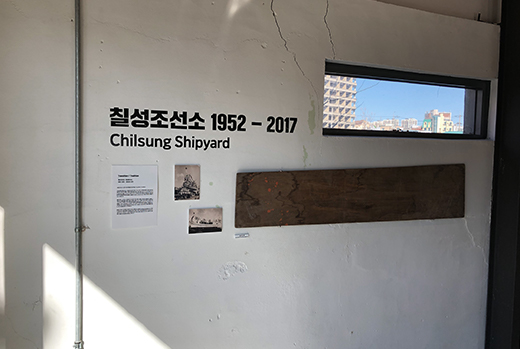 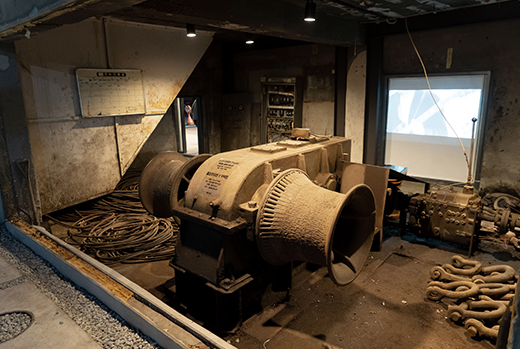 Choi’s grandfather had been running the shipyard since 1952. It now houses an open factory, a museum on the history of the shipyard and a playscape for children. Choi said he wanted to preserve ‘Chilsung Boatyard Salon’ as “a place that is alive.” That is, a place where fun things in your imagination do indeed happen and where ships are still being built. In one corner of the café, you can still find the workroom where Chilsung’s leisure boat brand ‘Y Craft Boats’ used to make canoes and kayaks. Built in the 1960s, it is the oldest part of Chilsung Boatyard and is now the museum exhibiting photos of the old shipyard, floor plans and replicas of wooden fishing boats. It has also hosted concerts and film festivals. 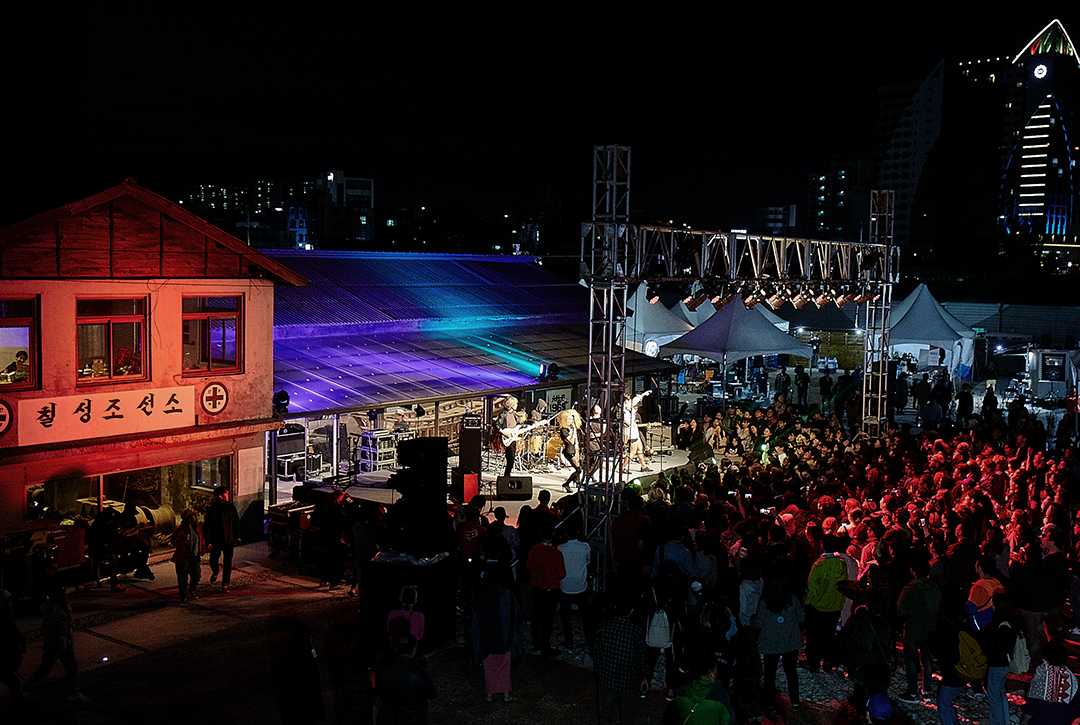 A photo from a music festival in 2018 © Chilsung Boatyard Salon

The outdoor garden is where ships were brought in from the water for maintenance, and you will still spot rails and building slips. Come take a walk around the garden and soak in its natural beauty, and take a seat or even lie down on slips. Or you can tour the museum that tells different stories from each different section, and enjoy the view of the lake from the café. “Every little corner of the factory, old machinery and even abandoned pieces of metal all mean something to me, and organizing them and polishing them up for display was the most difficult thing to do,” Choi said. “I didn’t know what to keep and what to throw away, and I still don’t.” The best way to enjoy this place, built with so much love and care from the founding family, is to take all the time you have to really appreciate each and every piece of object.
Address 45 Joongang-ro 46 beon-gil, Sokcho, Gangwon Province
Inquiry +82-33-633-2309
Instagram @chilsungboatyard

Jeju | Gongbech
A new life has been breathed into abandoned refrigerated warehouse built in 1982. At the end of the seaside village Dongbok-ri in the northeastern part of Jeju, you will now find the café ‘Gongbech.’ It is stunning for its sheer size and the beauty of the natural backdrop. Gongbech is a cultural complex, hosting art exhibitions while also serving coffee and pastries. It opened in 2019 after some two years of remodeling. 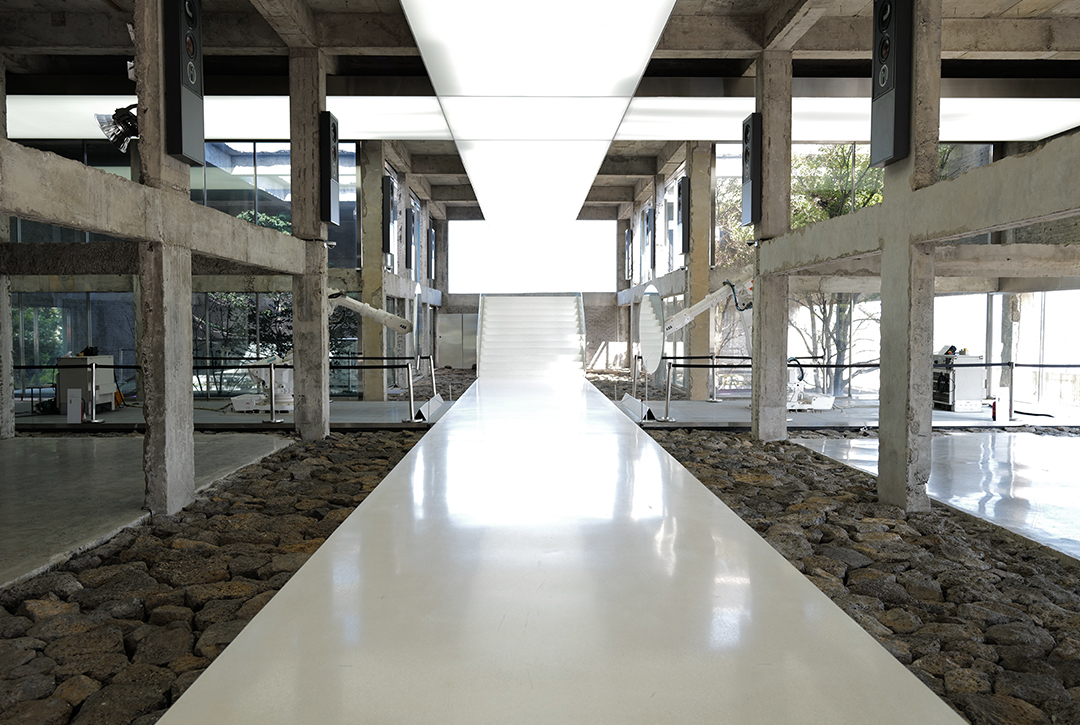 View of the inside at Gongbech, blending in nicely with its natural surroundings © Gongbech

Choi Moo-kyu, the architect behind Gongbech, recalled his first impression of the building this way: “The warehouse building had been there for some 40 years, and it had naturally become a part of the windy Jeju shore. And the beauty we discovered there also had something cruel and bleak about it. We wanted others to be able to identify those features.” The name of the café in Korean means ‘emptiness,’ and spatial devices here seem to have been left out so that people could discover the natural beauty of Jeju. The opening provides the view of both the sky and the ocean of Jeju, and the natural-looking slate roof and cracks along the walls let in light and wind of the island. “Gongbech is like a bowl. The most beautiful thing you can find here is Jeju,” Choi said. Indeed, the breathtaking Jeju ocean comes into view from the entrance. 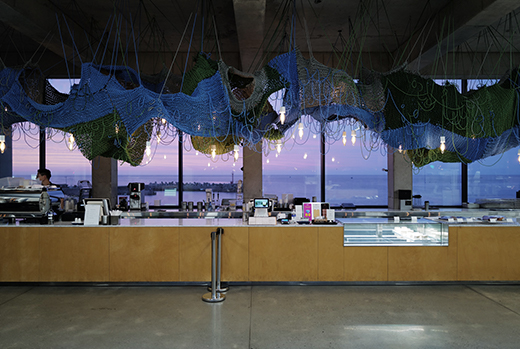 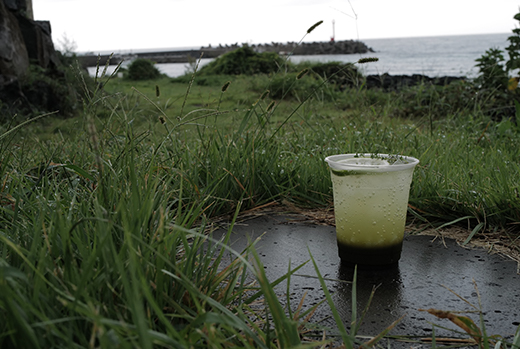 You can enjoy a wide variety of baked goods and beverages. © Gongbech 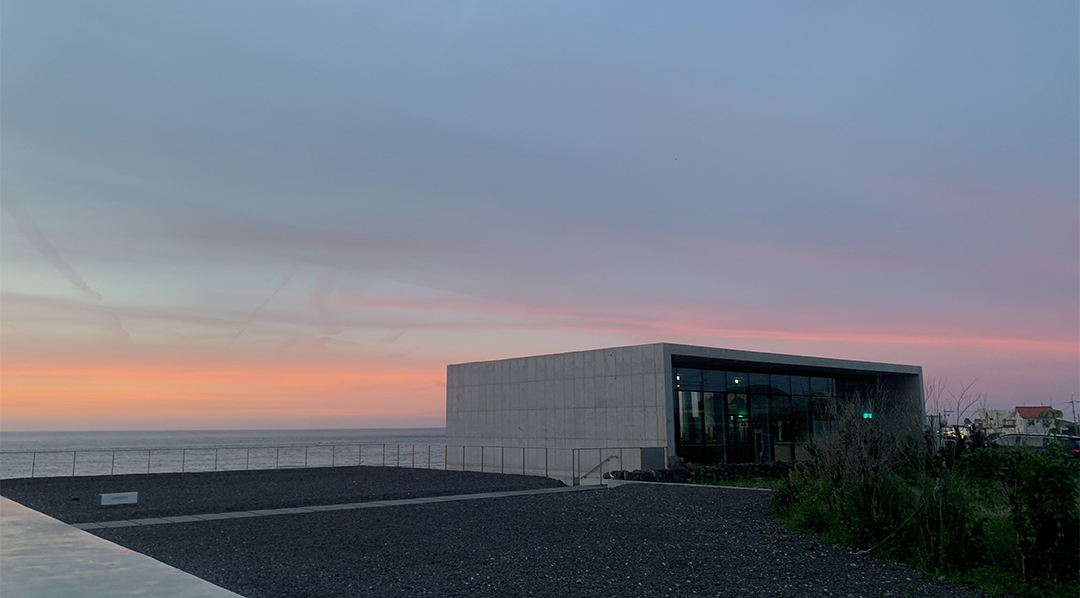 You’ll find the café itself as charming as its natural surroundings and its industrial interior design. The café serves freshly baked pastries, hand-roasted coffee and teas made of homemade marmalade. The gallery has hosted an exhibition for Korean painter Lee Wal-jong and another for the camera brand Leica. Installation pieces by Lee Kwang-ho and robotics pieces by the media art group Team Void can be found throughout the café.
Address 83 Dongbok-ro, Gujwa-eup, Jeju, Jeju Island
Inquiry +82-64-783-0015
Instagram @gongbech.official

Busan | Brown Hands Baekje
Once the signs for all the commercial spots came down from the building, a century-old red brick building revealed its true color. Located about a two-minute walk from Busan Station and erected in 1922, the building once housed ‘Baekje Hospital,’ the first modern private modern hospital in Busan. After it shut down 10 years later, the building served as homes for restaurants, local police, consulate and temporary embassy. It once stood five stories tall, but a fire in 1972 wiped out an entire floor. And this dilapidated building that seemed to represent all the joys and sorrows of its time began to attract crowds in 2016. ‘Brown Hands,’ a handicraft brand with a focus on metal casting that values tradition and history, helped shed a new light on the building. 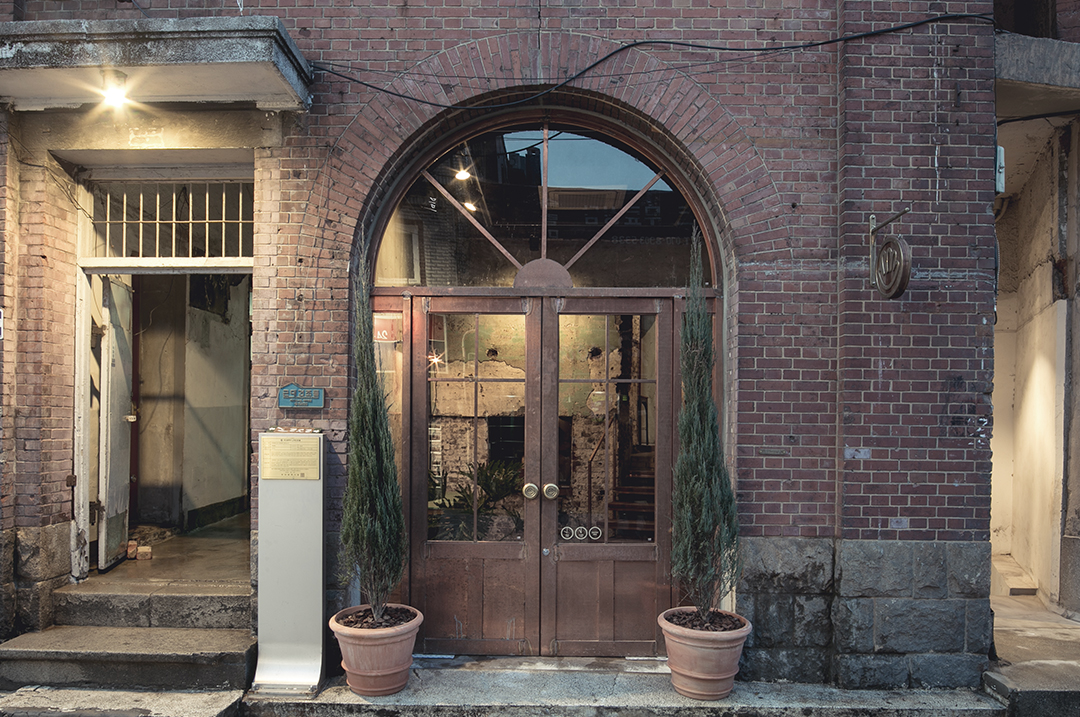 The building showing its age on the outside © Brown Hands

“I believe the best type of remodeling is to turn the clock to the very birth of the building, and not to seek new changes,” said Brown Hands founder Kim Ki-seok. “It was difficult to recover the early form of the building, but we removed some unbalanced elements that had accumulated inside and tried our best to restore it in its original appearance.” ‘Brown Hands Baekje’ is the name of the café run by the company. It is so named after the old hospital. And as you walk through the arched doors, you will feel like you’ve been transported back in time. It’s easy to see there were attempts to preserve the original features of the building. Peeling paint and cement set against bright tables and chairs create an exotic air. 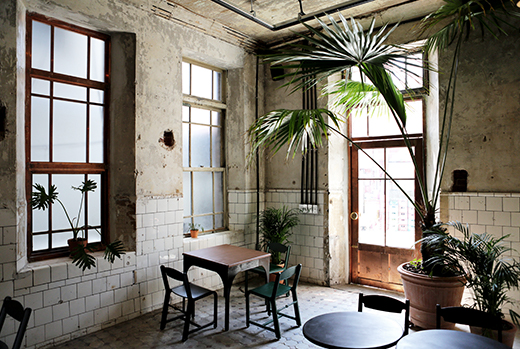 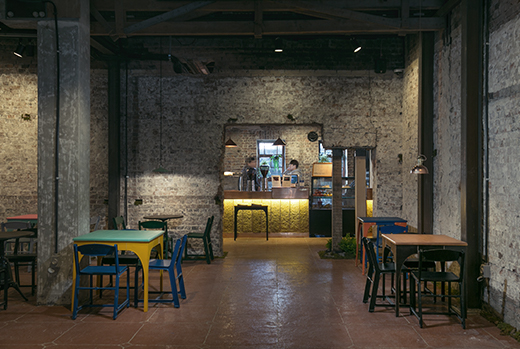 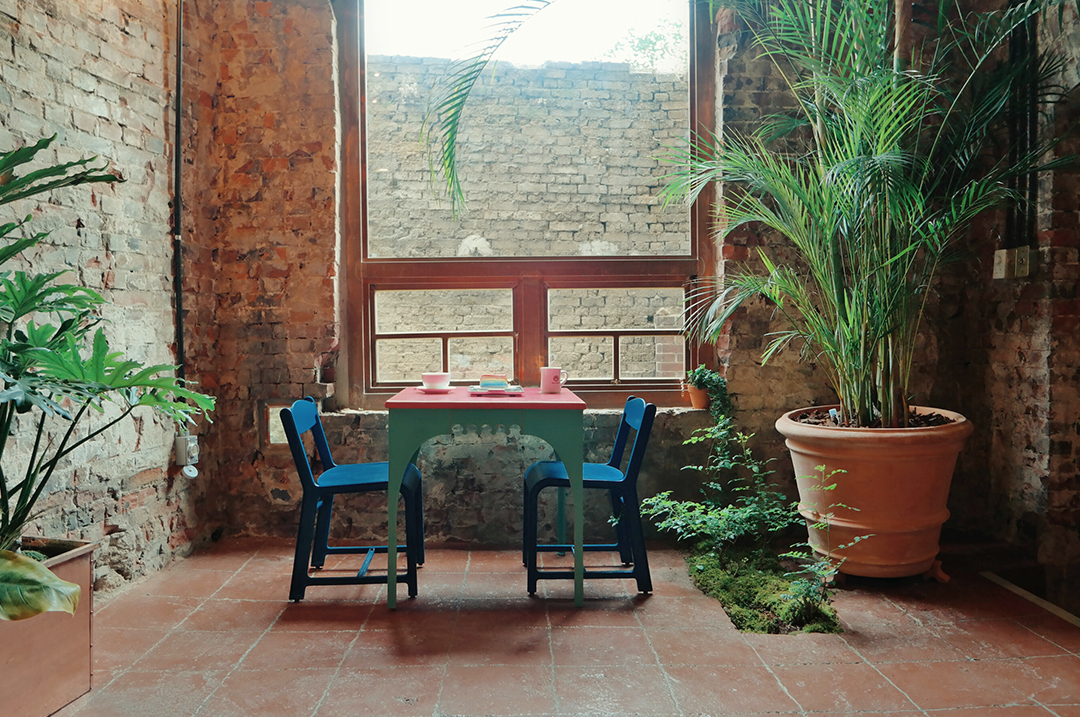 The exotic ambience inside © Brown Hands

For nearly a century, the building has seen so many people come and go. Now it’s your turn to visit and create your own memories. Meanwhile, Brown Hands has continued on with its upcycling projects, locating old buildings that are no longer serving their original functions and giving them new purposes. Their works can be found at Gaehangno in Incheon and at Suewon in Anyang.
Address 16 Joongang-daero 209 beon-gil, Dong-gu Busan
Inquiry +82-51-464-0332
Instagram @brownhands_baekje_