Vietnam’s Maldives, Phu Quoc
Phu Quoc is the most-sought after vacation spot in Vietnam these days. After the brief closure of its borders during the pandemic, Vietnam chose Phu Quoc as the first place to open doors to international travelers.
The fact that it is a place unreachable by land transport means fewer human traces, less environmental damage, and slower development. These are qualities we expect when we pick islands for our trips. A blessed natural environment and beautiful scenery give islands their unique atmospheres. Jeju Island of Korea is one of them. In Vietnam, it is Phu Quoc. 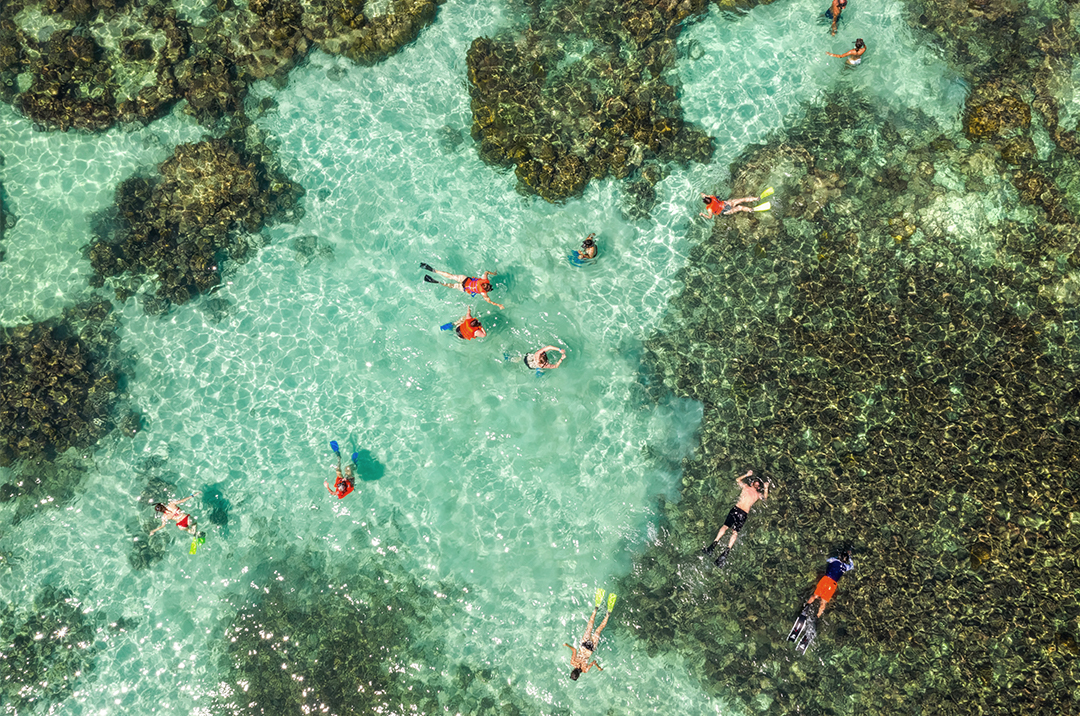 From Prison to Tourist Spot
Although Phu Quoc is the largest island in Vietnam, it only has a total area of 589km², about a third of the size of Jeju Island. Located in the southwestern end of Vietnam, it is closer to Cambodia than it is to mainland Vietnam. With the exception of metropolises such as Hanoi and Ho Chi Minh City, Vietnam has attracted tourists mostly to its better-known vacation destinations such as Da Nang and Nha Trang. However, Phu Quoc recently rose in rank in terms of the amount of interest shown by international travelers.
Phu Quoc has long been a popular vacation spot among the local Vietnamese. It is their go-to island for a honeymoon or holiday season. As more and more people consider going to a foreign country for their honeymoon, Phu Quoc may play a similar role as Jeju-do of Korea does, as far as today’s tourism is concerned. With the opening of an international airport in 2012 and construction of world-class hotels and amusement parks since 2015, Phu Quoc has gradually established itself as a top contender in the Vietnamese tourism industry. Despite the rosy outlook, however, the island’s travel business hit a snag when the Covid-19 took over. So it had to get its breath back while patiently waiting for the resumption of global travel. 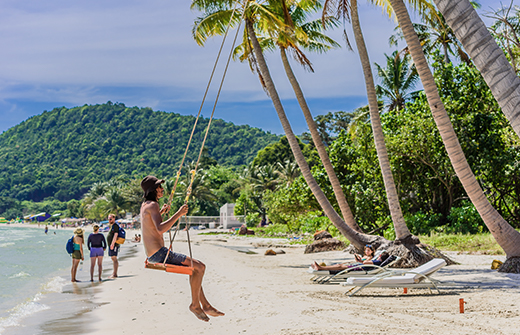 Wood swing on the beach 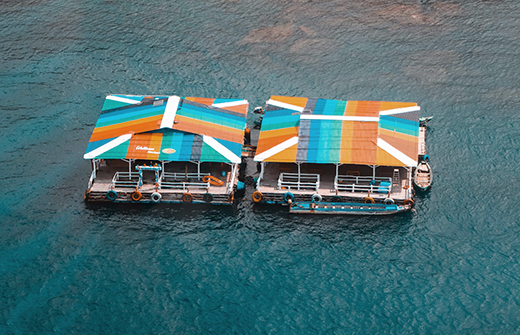 Phu Quoc used to house political prisoners under French colonial rule. Similarly in Korean history, the islands of Jeju, Geoje, and Heuksan had been turned into prisoner camps or places of exile by the colonizing force. Being in the middle of the vast ocean, far away from land, made those islands an ideal location to send prisoners to as they wouldn’t be able to escape. For this reason, Phu Quoc remained a prison island for a long time. Political unrest during the Vietnam War had the island continue to serve its role, once again. It is an irony brought on by the location of the island. There are memorial halls in Phu Quoc dedicated to its tragic past. 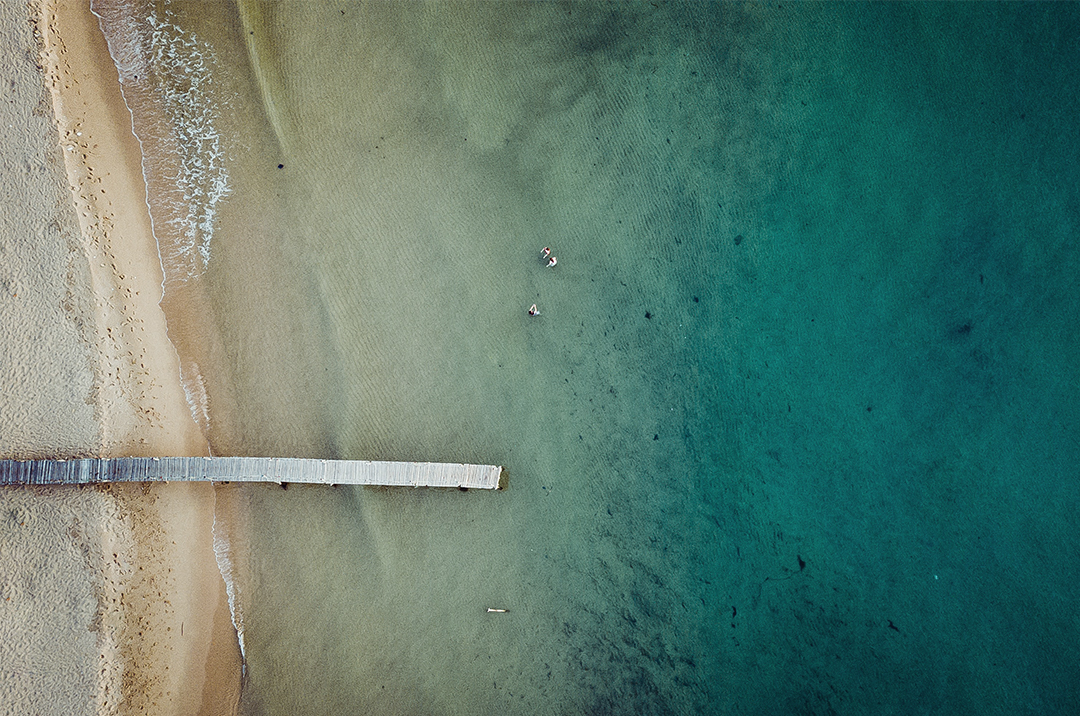 Best Time for Travel
The best time to travel Phu Quoc is from December through March each year. Seasonally it is a dry period before the weather becomes too hot. So with some sun protective clothing, you can comfortably enjoy vacationing in Phu Quoc without worrying about the extreme weather. 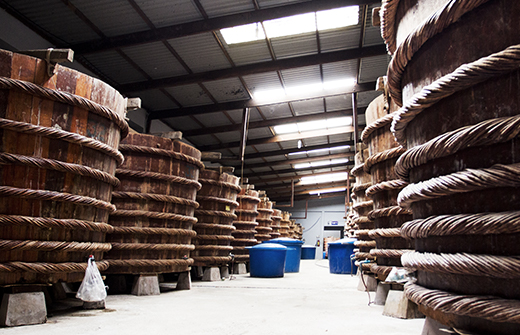 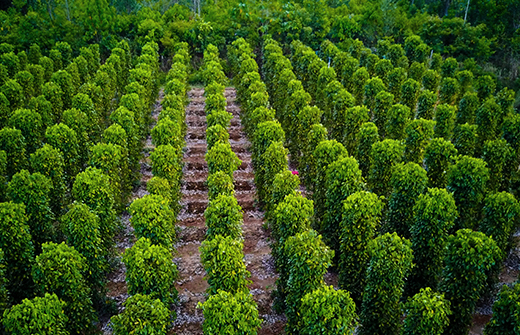 Vietnam is the world’s largest producer of pepper. Almost 60 percent of global pepper production comes from Vietnam. Phu Quoc is the top pepper producing region in the country. Over 40 percent of the island residents work at pepper farms. There are two types of pepper known for its superior quality in the world—Kampot and Tellicherry. Kampot is grown in Phu Quoc. Originally from the region of Kampot in Cambodia which shares a border with Vietnam, Kampot pepper is cultivated on a large scale in Phu Quoc thanks to the island's geographical proximity and optimal natural environment. The successful farming led to the popularity of pepper plantation tours where visitors can buy quality pepper at a relatively low price directly from the farmers. In fact, there are some Europeans and Russians who would choose to tour the plantations for the sole purpose of buying pepper in large quantities.
Phu Quoc is also the top producer of nuoc mam, a fish sauce essential to Vietnamese cuisine. 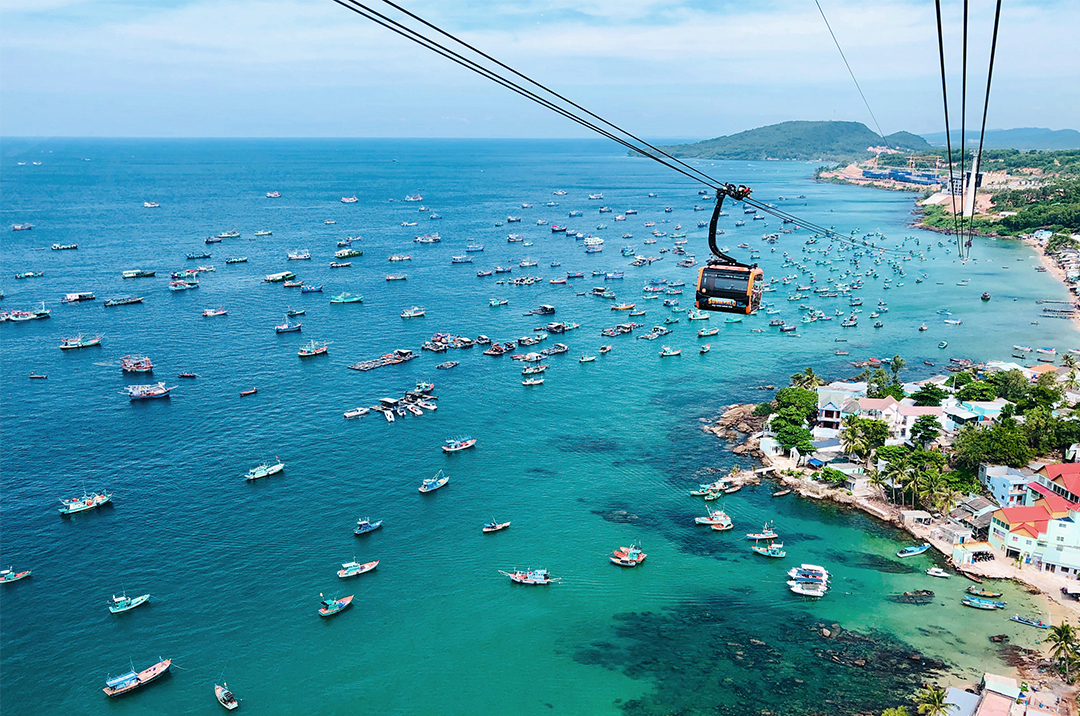 Viewing Charming Beaches from Cable Car
One of the best-known experiences offered in Phu Quoc is the Hon Thom Cable Car tour. The world’s longest cable car across the sea, spanning 7.9km. After boarding the cable car, you can comfortably enjoy the white sandy beaches of Phu Quoc and other scenic sites from above.
As every island has its own beautiful beaches, Phu Quoc does, too. Most locals would pick Sao Beach, located in southeastern Phu Quoc, as the most scenic beach. It was also selected as one of the top 10 beaches around the world by CNN. Sao in Vietnamese means ‘star’. With the exception of a few periods, the island offers great water sports activities. In particular, the white sand covering the shore is hard to find in mainland Vietnam, so even local Vietnamese people give Sao Bach a thumbs up. If you’ve ever seen photos of a white beach in Vietnam, chances are it is Sao Beach. It is also famous as a place to watch the sunset. 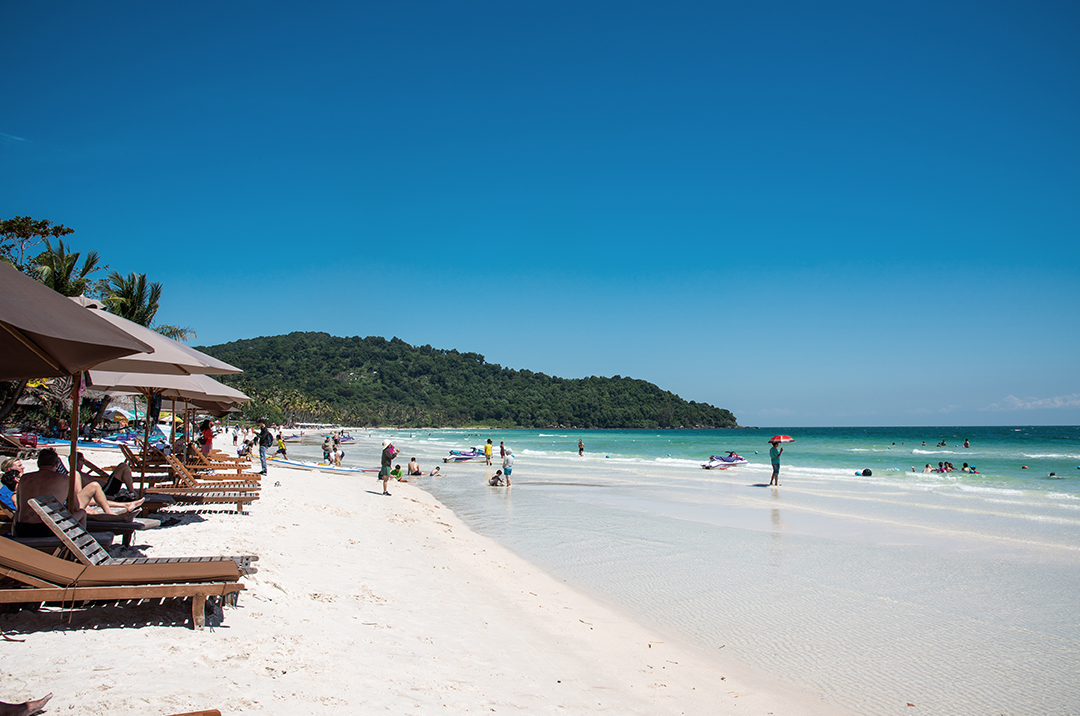 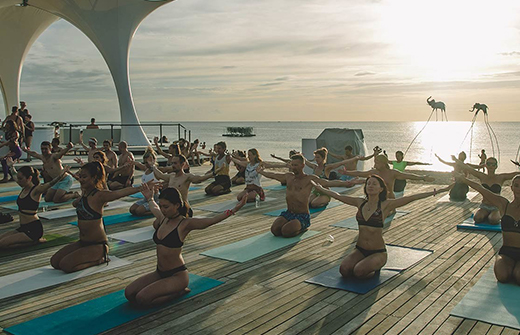 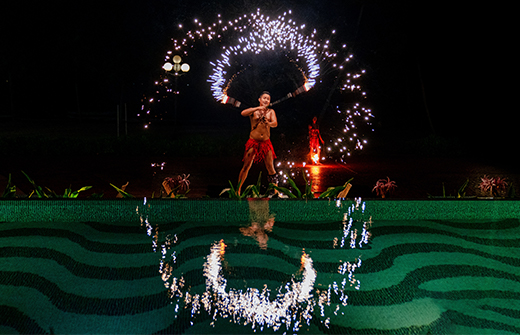 A performance at a beach club

Despite the location of this one-of-a-kind beach on the right side of the island, major accommodation facilities are mostly built along Long Beach in the opposite part of the island. It is more accessible from the island’s main town of Duong Dong, and the 20km-long stretch of beaches in the center of the island makes it a prime location for the formation of a tourist complex. Long Beach presents a number of major beach clubs and overflows with tourists enjoying a vibrant nightlife during peak seasons. Whether it’s at Sao Beach or Long Beach, watching the sunset, relaxing on a sun bed will be something you’ll never regret. 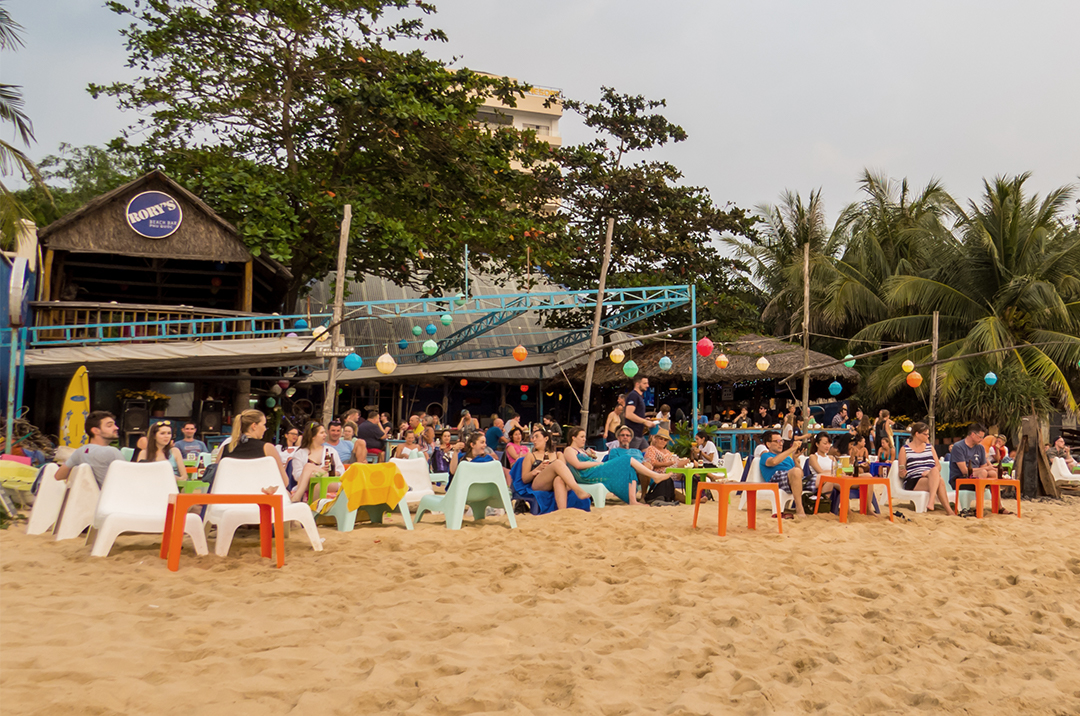 People waiting for the sunset at the beach

From Hopping to Safari
Done watching the sun go down? You’ve got two options. One is having dinner at an oceanfront restaurant or a club while enjoying the view of the sea, and the other is exploring the night market in Duong Dong. Although the concept of market tour is to experience the local lifestyle, in tourist destinations those markets often exist to boost tourism, rather than local trade. Duong Dong Market, however, offers reasonably-priced local specialties as well as diverse delicacies.
Hopping tours and safari are also recommended activities by the locals. As with other Southeast Asian countries with many islands, island-hopping tours are the most popular attractions near Hon Thom Island, situated south of Phu Quoc. Their programs include snorkeling, fishing, and the cable car ride. 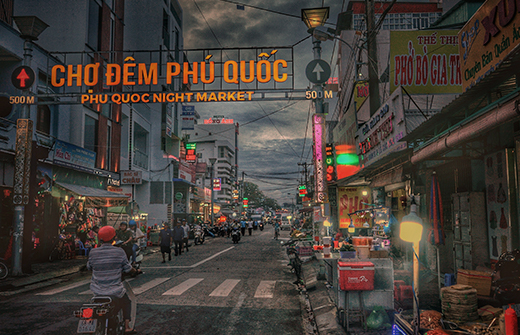 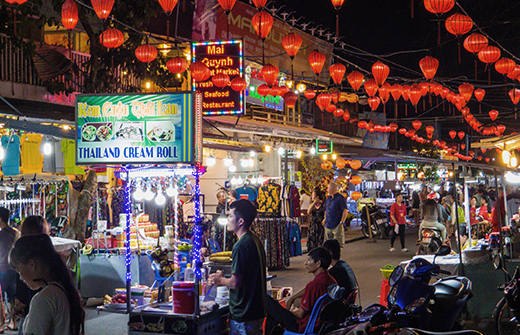 If you are traveling with a child, we encourage you to go on safari. Phu Quoc’s Vinpearl Safari is the biggest of its kind in Vietnam, providing home to over 150 species of animals. Operated by VinWonders, it is a theme park offering the safari, zoo, and various rides. To children, the place has a magnetic charm.
If you want to include Suoi Tranh Waterfall and fishing villages in your itinerary, the Phu Quoc trip might take a few more days. Traveling the tropical Phu Quoc Island now, before more buildings are constructed and more visitors come by, will allow you to fully enjoy the romantic island while having a relaxing vacation.