SUMMIT One Vanderbilt, Meditating in the Sky
Manhattan now has its fifth observation deck. Meet ‘SUMMIT One Vanderbilt,’ designed by the Norwegian firm Snøhetta as a place with a quiet, contemplative atmosphere like fjord.
As soon as the news of the opening of ‘SUMMIT One Vanderbilt’ (SUMMIT henceforth) in Manhattan arrived, it begged the question. Why are observation decks back in vogue? There had to be reasons other than the ones that had long made observatories main attractions in the first place. Manhattan has no shortage of observation decks. ‘Edge’ is the breathtaking sky deck in Hudson Yards, and now it’s been joined by ‘SUMMIT’ at One Vanderbilt building in Midtown.
These new decks have this in common: they offer visitors an entirely new kind of thrill. This is in line with the evolution of the modern architecture, which, in addition to sheer heights of buildings, has gone more daring in styles and materials. The newest observation decks represent the culmination of the modern architecture, engineering and technology. 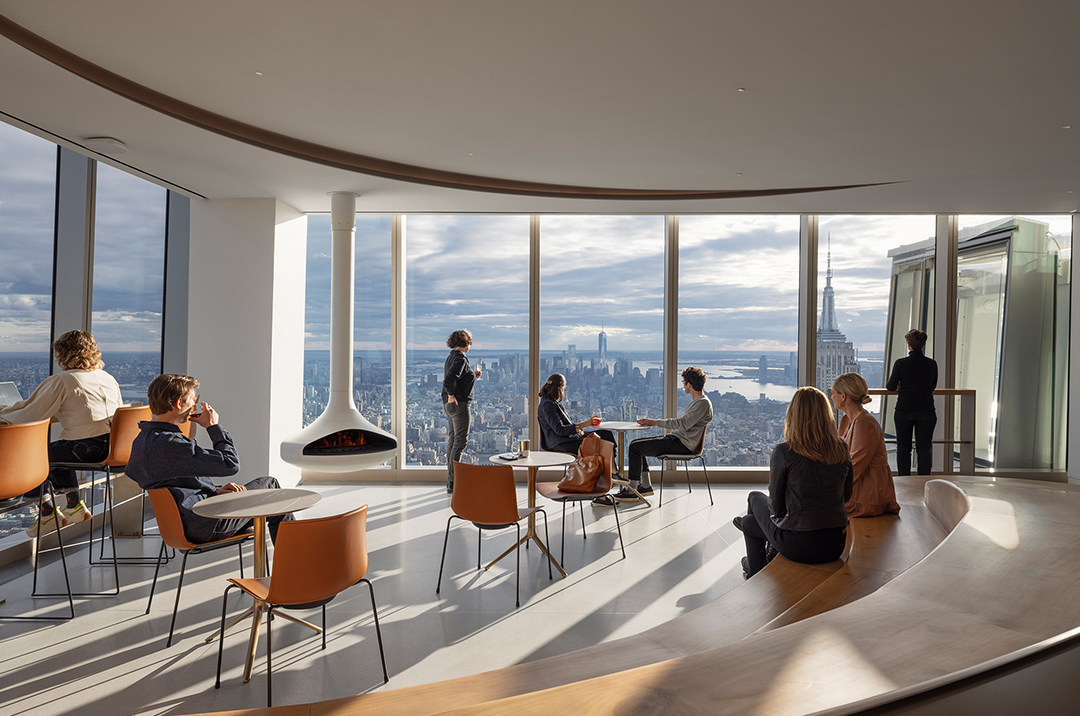 Café ‘APRÈS’ was inspired by a Nordic ski chalet, highlighted by its casual ambience. Photo by Michael Grimm 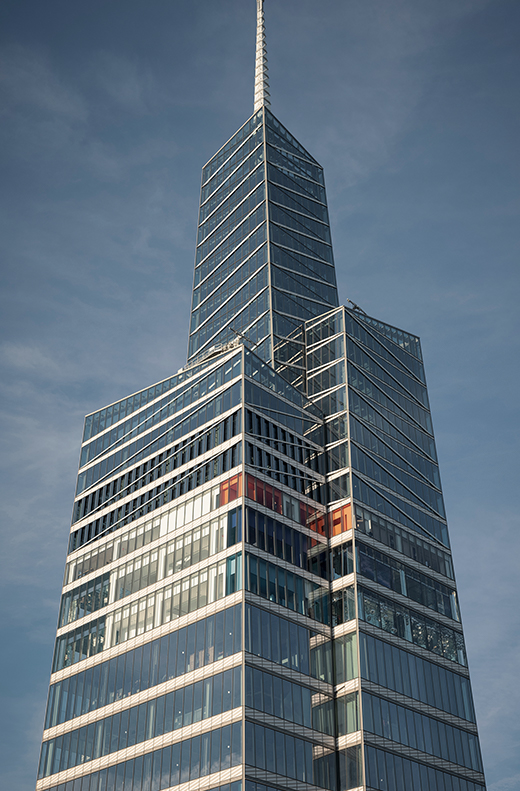 SUMMIT is the observation complex inside One Vanderbilt. Photo by Michael Grimm 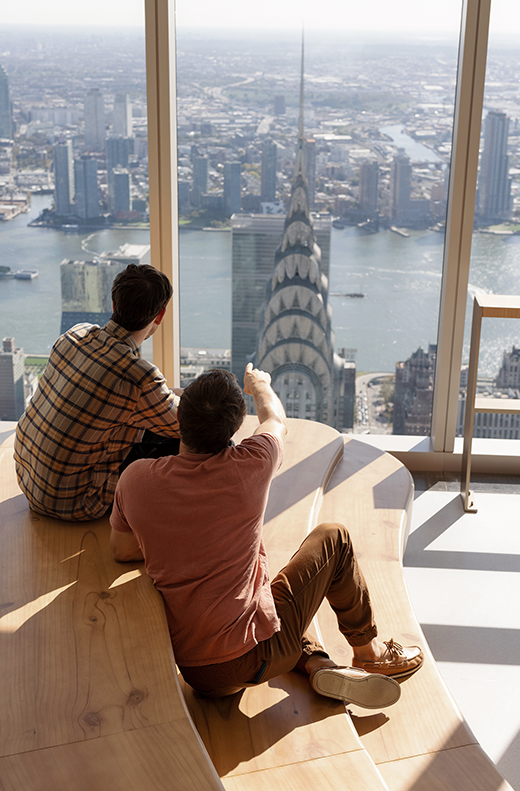 ‘APRÈS,’ the highest café in Midtown located on the 93rd floor. Photo by Michael Grimm

Icing on the Cake that is One Vanderbilt
One Vanderbilt, the skyscraper standing tall on Vanderbilt Ave., recently unveiled its new four-story observation complex called SUMMIT. The building had been completed in 2020, and the deck opened about a year later as the proverbial icing on the cake. One Vanderbilt stands 427 meters tall, making it the fourth-tallest structure in Manhattan and the tallest in Midtown. One Vanderbilt was designed by KPF (Kohn Pedersen Fox), which also built LOTTE World Tower in Seoul, Roppongi Hills in Tokyo and Hudson Yards in New York. But the Oslo-based studio Snøhetta designed SUMMIT at the top of One Vanderbilt. Snøhetta had previously created such contemplative spaces as Norwegian National Opera and Ballet, the National September 11 Memorial Museum Pavilion and the new wing of the San Francisco Museum of Modern Art.
There must have been a good reason that two different firms, and world-renowned ones at that, went to work on the same building. In an interview with CNN, Marc Holliday, chairman of SL Green, the real estate developer that owns the building, said the goal was to create “a destination that offers an interactive experience that will be remembered for a lifetime with the best, amplified views in all of New York City.” So what separates SUMMIT from other observation decks? 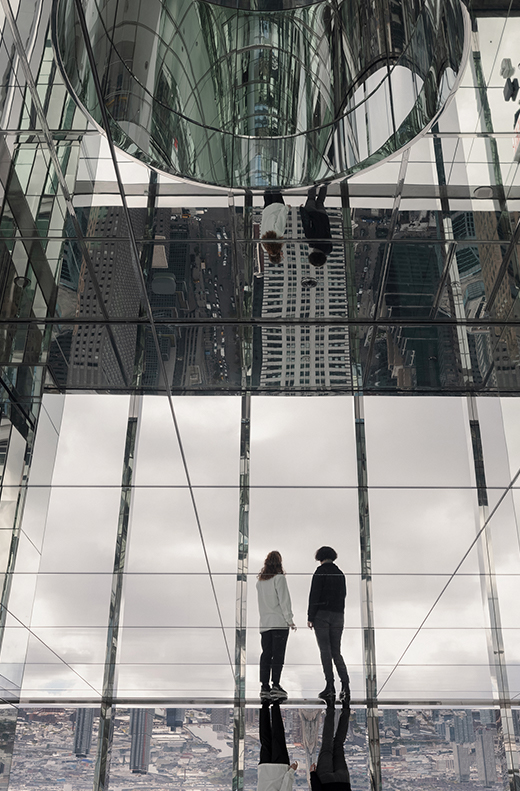 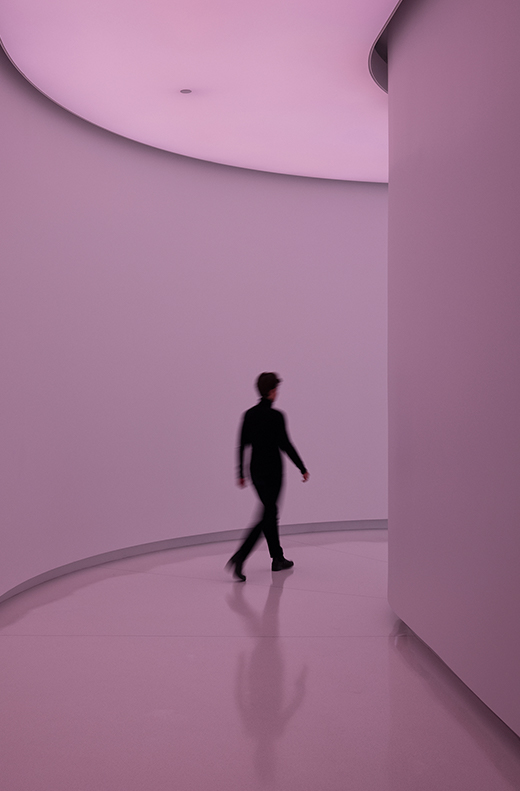 Experience That Resets Senses
To access the elevator to SUMMIT, you have to walk past the main concourse of Grand Central Terminal next door and go underground. In other words, you get to visit a landmark within a landmark. But the tunnel leading to the elevator is pitch dark. It will catch you off guard. You simply have to rely on a tiny beam of light and some sort of noise to stay on your toes. That experience will awaken your senses. This will help you block out the outside world and get ready to embrace the new world about to open up in front of you. Welcome to the world of SUMMIT. 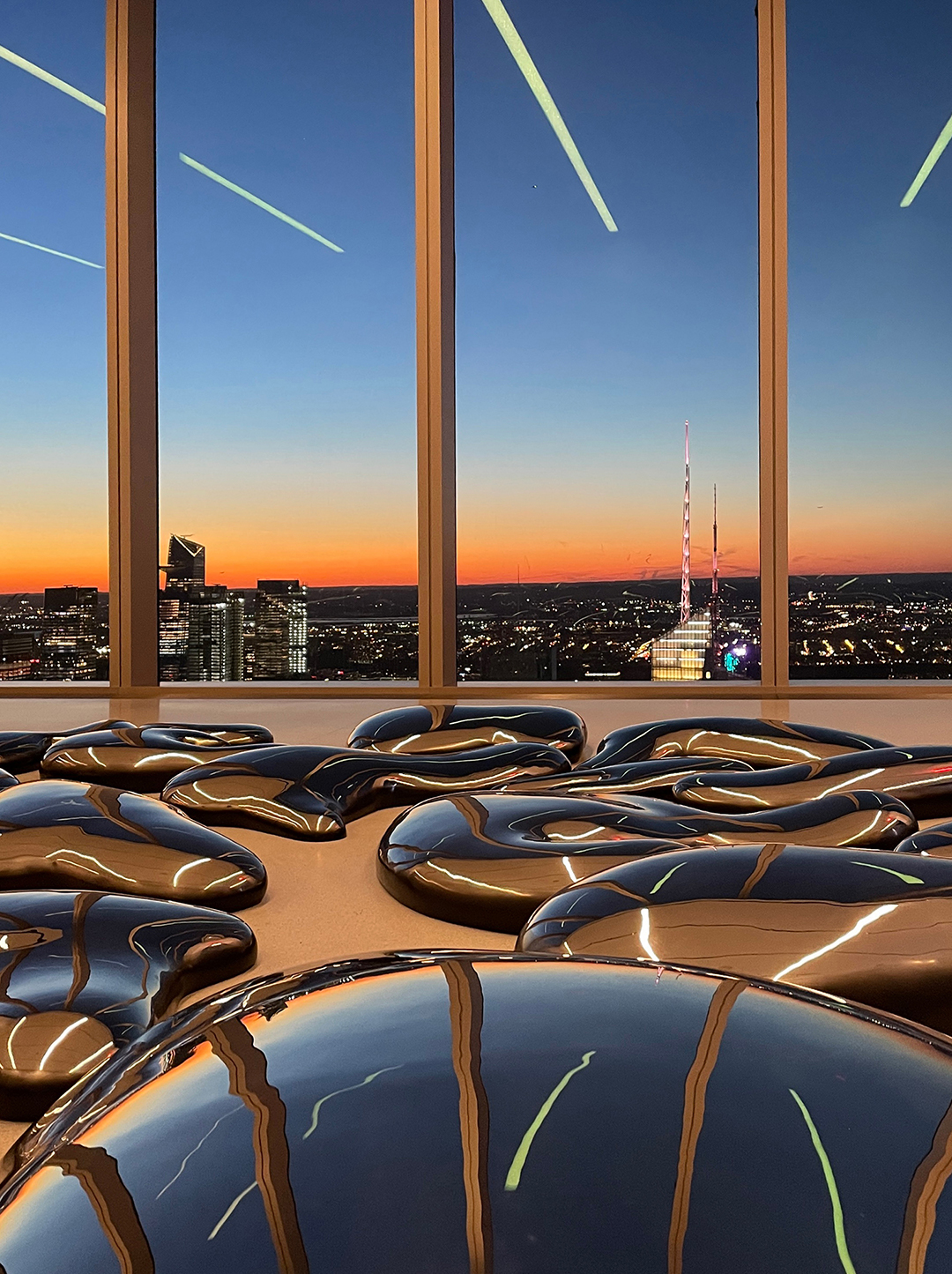 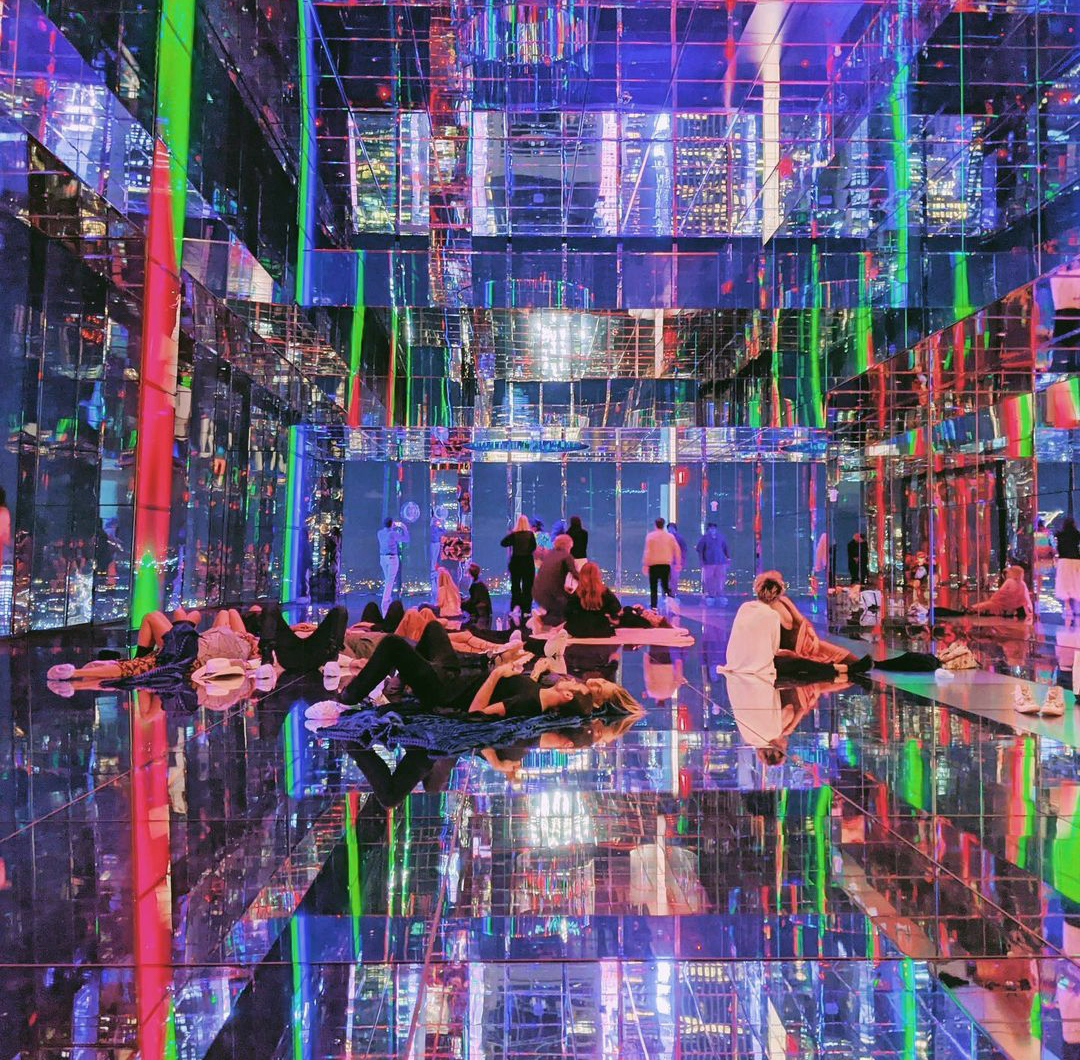 It only takes a zippy 43 seconds to reach the 91st floor. The ‘Hall of Light’ is an illuminated walkway that recreates real-time color and brightness of the New York sky. Beyond the Hall of Light is an art gallery, with an immersive installation exhibition ‘AIR’ by the New York-based artist Kenzo Digital covering three stories. It’s one of the special features at SUMMIT. Instead of simply giving a panoramic view of New York’s five boroughs, SUMMIT has used them as the backdrop and installed devices that can only experienced there. The gallery is mirrored on all sides and you’ll find yourself expanded into infinity along with the reflected backdrop of the Big Apple. This will also create a soaring sensation, with neither boundaries nor structures.
At SUMMIT’s opening ceremony Kenzo Digital said, “I created Air for New Yorkers as an oasis that they can escape and feel the power of the present moment.” The artist wanted people to put away their smartphones for a second and feel the vibrant energy of the real world. The double-height mirrored space is called ‘Transcendence.’ It’s joined by the gallery called ‘Affinity,’ featuring floating reflective orbs, and ‘Unity,’ a video wall screen producing visitors’ portraits in real time using shapes of clouds. 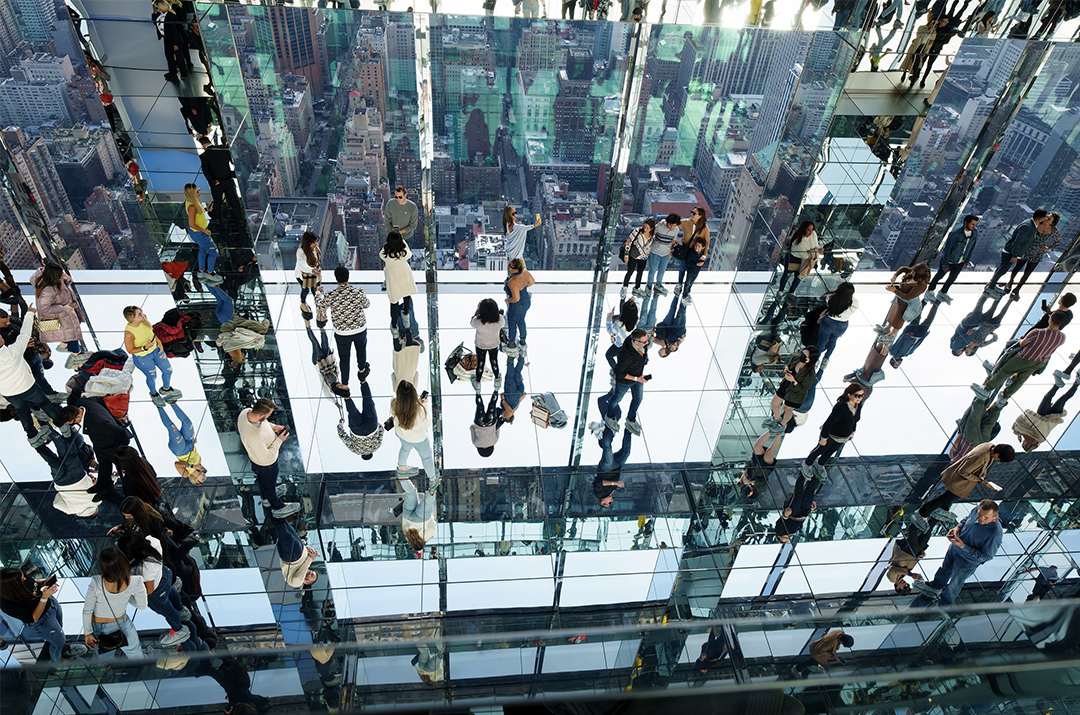 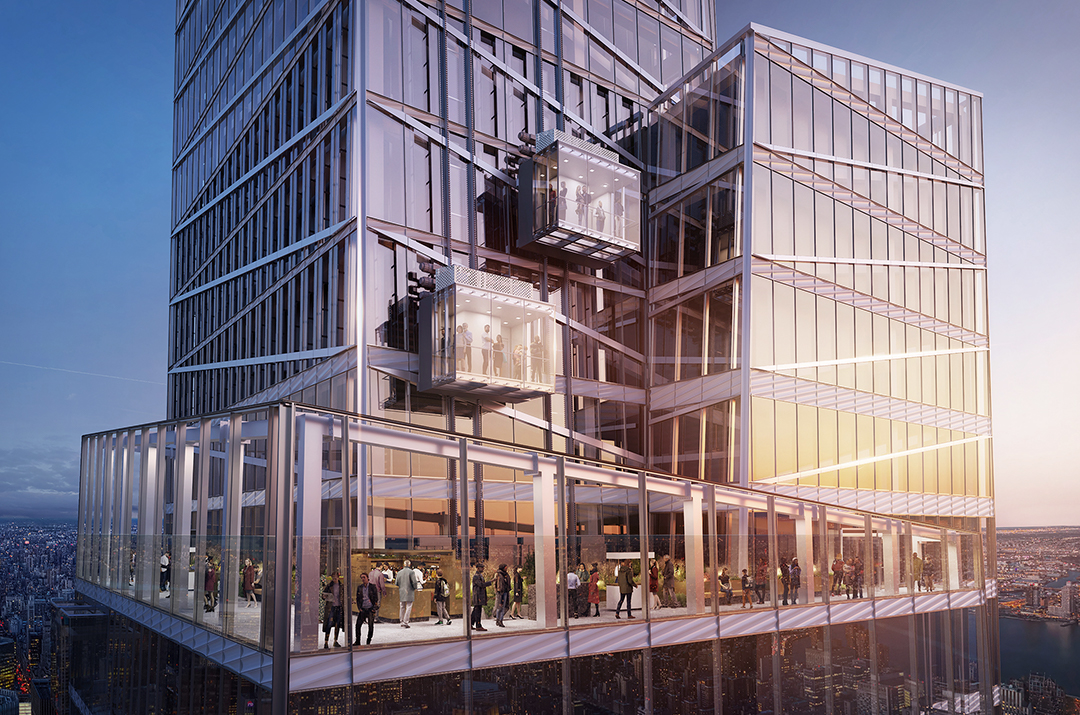 ‘ASCENT,’ the all-glass elevator moving along the exterior of the building. Courtesy SUMMIT One Vanderbilt

Where Thrill and Tranquility Intersect
By now, Yayoi Kusama must have come to the minds for some. As famous as her pumpkins are, Kusama is also well known for her ‘Infinity Mirror Rooms,’ built on the ideas of repetition and infinite expansion. And indeed, one other gallery at SUMMIT is dedicated to Kusama. Metallic pieces in her mirrored room ‘Clouds’ (2019) provide a quiet and contemplative ambience, unlike the earlier spaces. Being that high in the air is obviously a thrilling experience, but there can also be a sense of tranquility that transcends it all. And that is another special feature of SUMMIT. Snøhetta also created a sense of serenity in passageways connecting each gallery, balancing it with the dramatic views in the backdrop.
The 93rd floor also gives off a quiet and meditative ambience, compared to exhibitions on floors below. The top floor features APRÈS café and the outdoor Summit Terrace. You can enjoy cocktails and food served by Union Square Events, with Daniel Meyer, the famed New York restaurateur and founder of Shake Shack, in charge. The terrace was inspired by a ski chalet up a scenic mountain, and exudes a certain type of warmth and joy.

SUMMIT viewed from outside © shutterstock

But there’s more. Check out ‘ASCENT,’ the all-glass elevator. It’s the world’s highest rack-and-pinion elevator, and it moves along the exterior of the building. Imagine yourself being more than 300m above the heart of Manhattan. Nothing is in your way, and you’re at the absolute center of the universe. And that’s when it hits you: with such a breathtaking, jaw-dropping view stretched before you, you will be focusing harder on your inner self. 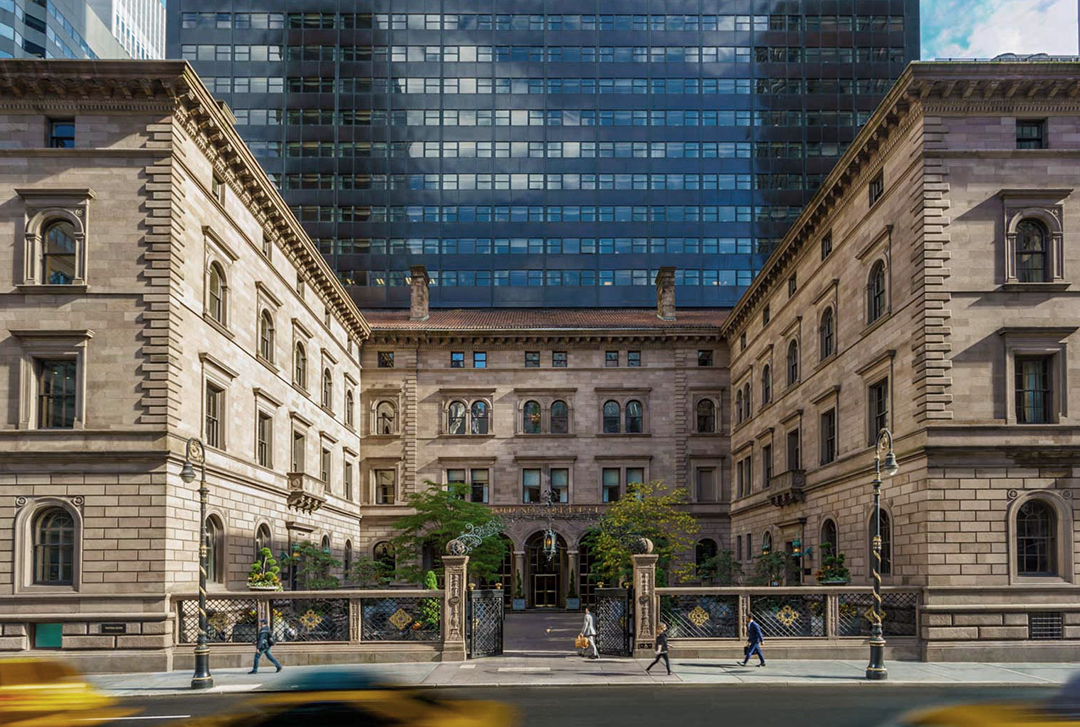