- An old proverb for the Eastern Slavs in Russia

This basically means that, if you want to have a fulfilling life, you should have fun during the Maslenitsa Festival and make blini (Russian pancakes) and share them with your neighbors. Maslenitsa runs for a week as the most entertaining and extravagant festival for the Eastern Slavs. 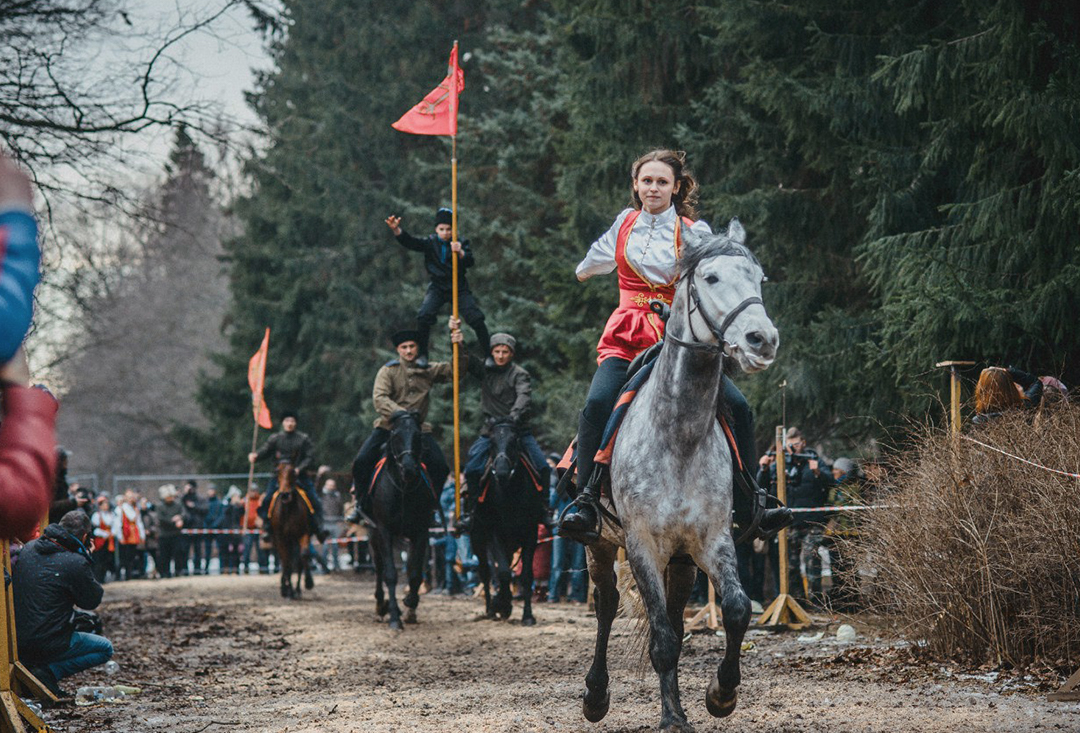 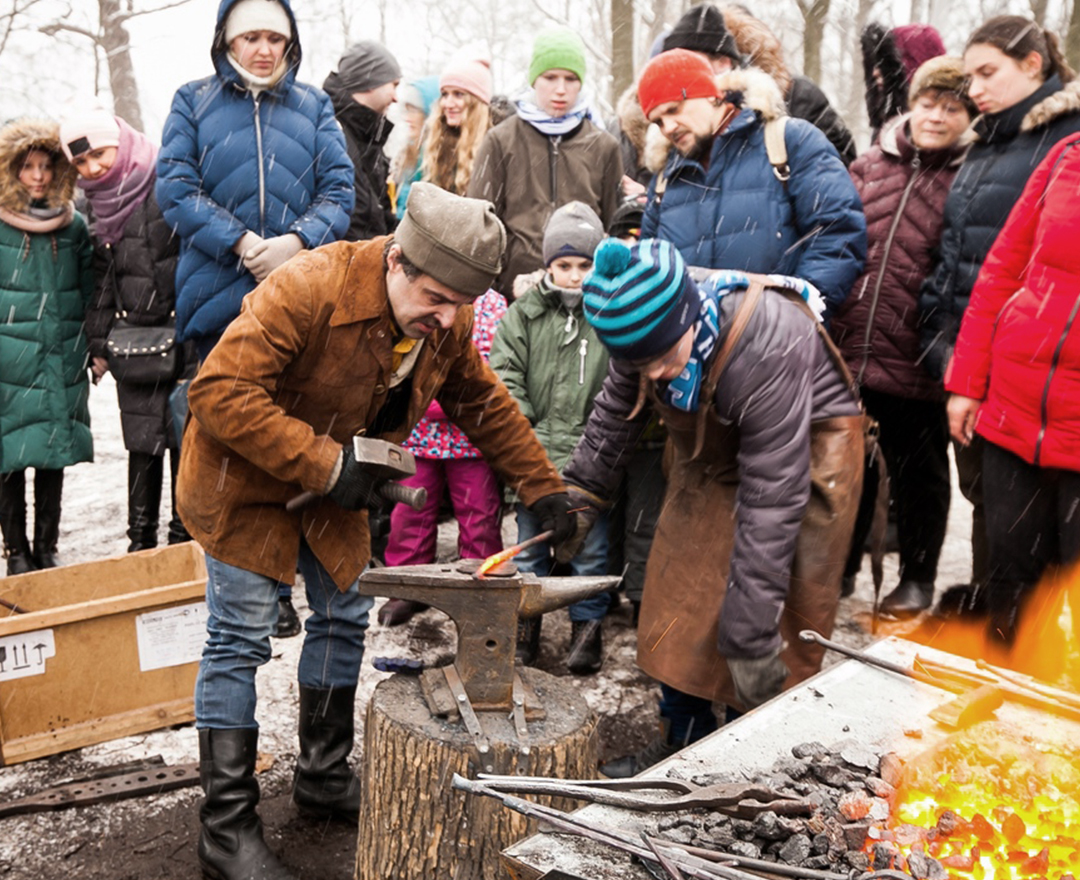 You can try the traditional Russian horse sleigh riding and blacksmithing during the festival.

Origins of Maslenitsa
The word Maslenitsa comes from ‘maslo,’ which means oil in Russian. During the festival, meat consumption is forbidden, and you can only eat flour-based dishes cooked in oil, dairy or fish. Maslenitsa is also called Oil Week or Cheesefare Week. But note that this isn’t time for complete abstinence. People during Maslenitsa still let themselves go, meat or not.
Folklorists before the Russian Revolution believed that Maslenitsa originated in the folk religion that worshipped Volos, the god of livestock. And folklorists during the old Soviet era regarded Maslenitsa as a link between the winter and the spring. This is why the festival was seen as heritage of the ancient worship of the sun. The festival includes a ritual of setting bonfires and burning wheels hanging on posts. The round blini represent the sun. Maslenitsa was also a way for farmers to pray for a rich harvest. In a nod to the sacrifice of women in ancient customs, female effigies are burned as the height of the festival. The hope is that ashes that fly all over the place and cover the soil will help the ground more fertile.
Today, Maslenitsa runs for a week before Lent. The festival straddles the line between meat eating and fasting. It is similar to Europe’s Carnival or the Catholic Church’s ‘Mardi Gras (Fat Tuesday)’ or ‘Abstinence.’ Dates change each year, though Maslenitsa typically takes place at the end of February. This year’s even goes from Feb. 8 to March 6. Traditional events include making and burning Maslenitsa effigies, sleigh rides and blini making. Throughout the festival, it’s easy to see people are ready to bid adieu to winter, and the air is full of anticipation for warmer days ahead. 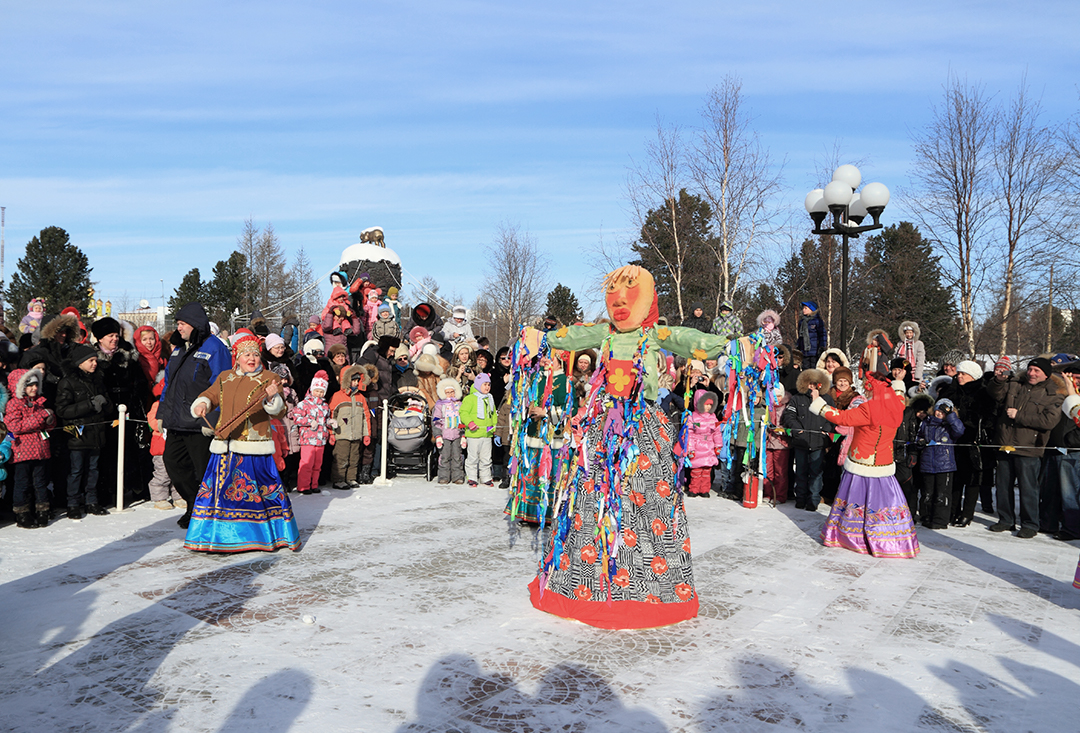 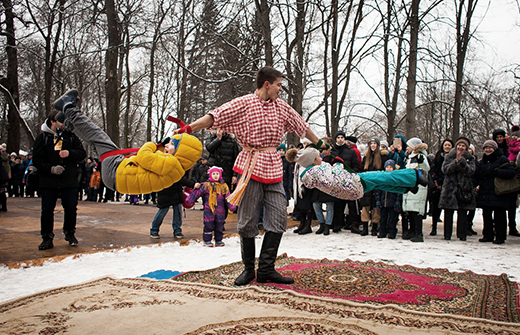 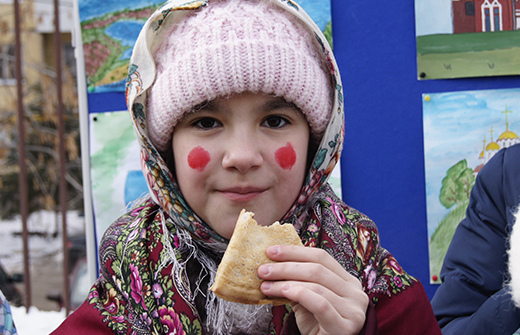 The festival is all about indulging yourself with great food and having fun dancing.

Festival That Ushers in Spring
Russia celebrates the arrival of spring with Maslenitsa. And during the festival, there’s no shame in all that eating, drinking, dancing and singing. Excessive eating and playing are all about ensuring fruits of labor and happiness for families.
Each day of the Maslenitsa week has its own name, all of them given with relationships with family or others in mind. Monday is about meeting. This is when daughters-in-law are sent to their own families. People build mounds for sleds and swings, cook up blini and make Maslenitsa effigies with straws and worn-out clothes. Tuesday is about fun, and young men and women are matched up, too. On Wednesday, sons-in-law visit their mothers-in-law to enjoy blini. Thursday is spent playing outside, and this is when the festival starts in earnest. People drop whatever they’ve been doing and join in on the fun. Friday belongs to mothers-in-law, who pay a return visit to their sons-in-law. On Saturday, daughters-in-law invite their sisters-in-law and other relatives from that side of the family. The last day is Sunday of Forgiveness. People pay respects to their ancestors and dedicate blini to them in search of forgiveness. They also burn their effigies to cap off the festival. 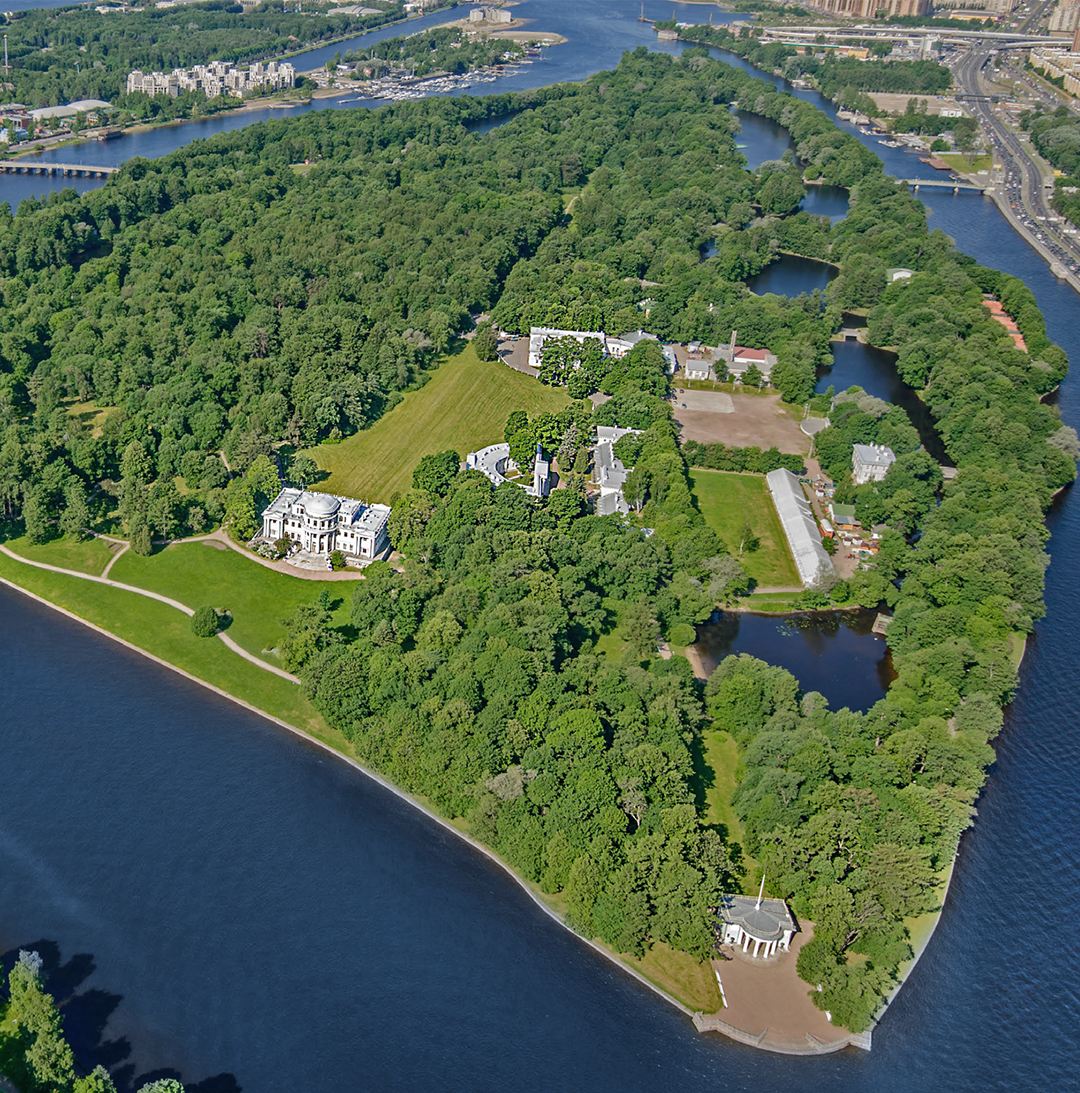 Party Time on Yelagin Island
In St. Petersburg, Yelagin Island hosts the most fun and lavish Maslenitsa Festival. The island is named after Ivan Perfilievich Yelagin, the fifth owner of the island and the chief imperial painter also famous for being a great host.
The island is currently home to the Central Park of Culture and Leisure. The park features some great pieces of St. Petersburg cultural heritage, including the Yelagin Palace built in the early 19th century. The festival on the island is a series of games, activities and parties. Yelagin Island’s festival is even titled, ‘Roar, Maslenitsa!’ Visitors have a chance to enjoy many different activities. You can pick up handicraft souvenirs from glass art studios, or attend a music performance or plays at one of six concert halls or theaters. 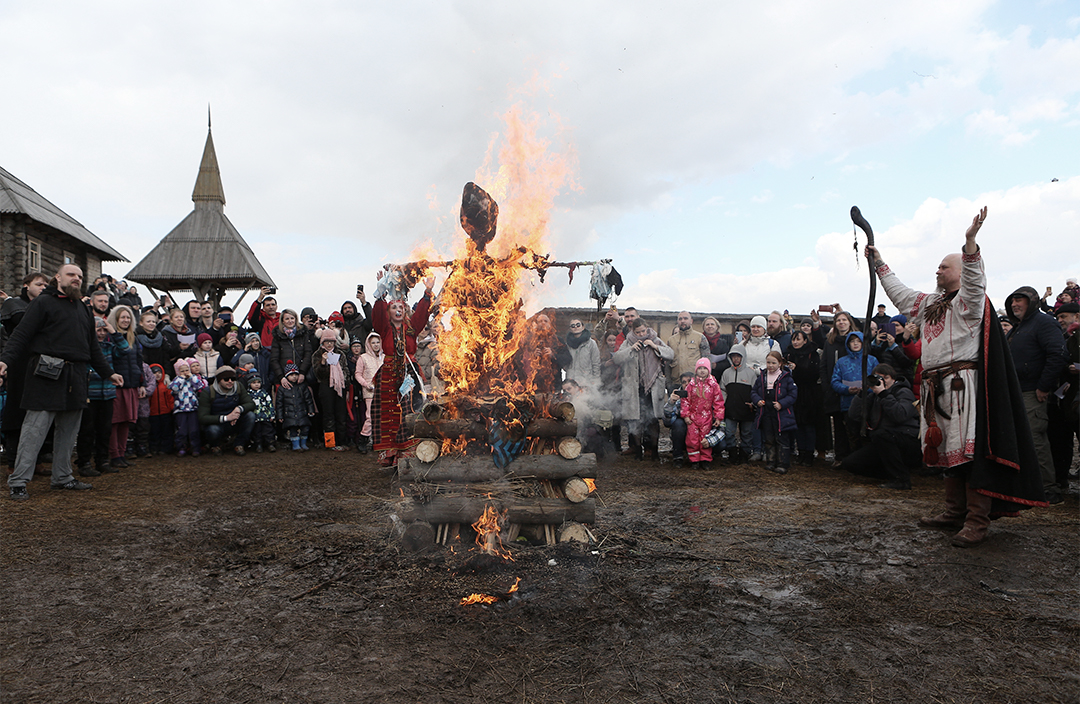 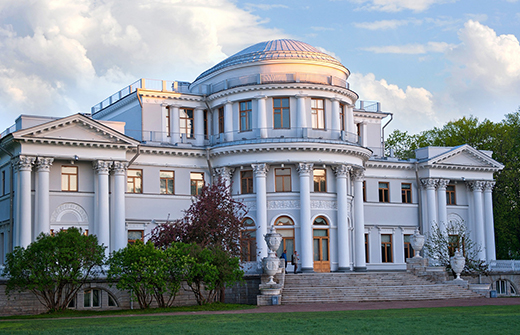 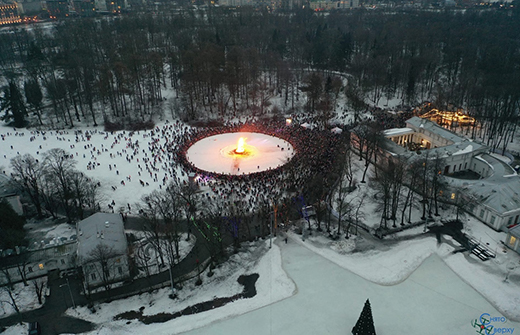 People burn Maslenitsa effigies on the final day as they get ready to welcome the new year.

The ‘Full Garden’ brings in agricultural and marine products from all across the country that you can sample and purchase. At the ‘Forest of Blacksmith,’ you can watch masters at work and pick up some souvenirs. The Russian Cossacks will do demonstrations at ‘Cossack Camp.’ The ‘Fun Yard’ stages comedy shows as well as folk song and dance performances.
The festival comes to an end at the ‘Oil Prairie.’ This is where the Maslenitsa effigies are burned, as the ‘Roar, Maslenitsa!’ festival reaches its peak. Along with effigies, people burn small pieces of papers with all of their worries and fears from the previous year written on them. By doing so, they look to get rid of negative energy and welcome in the new season full of hope. 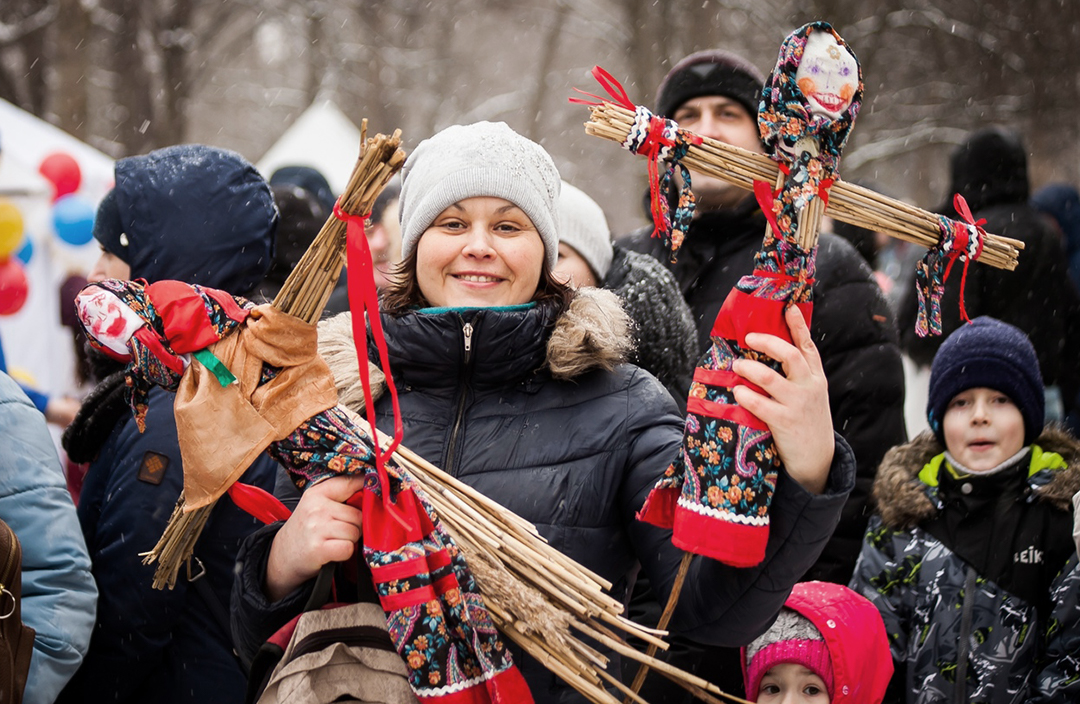 You will see Maslenitsa effigies of many different faces during the festival.

Here is an interesting quiz about Maslenitsa.
“A girl goes out on the street with her first piece of blini, gives it to the first man she meets, and asks his name. Why?”
Because she will marry him.

If you do attend the Maslenitsa Festival, keep this in mind. If some beautiful Slav lady offers you a piece of blini, you will have to think twice before taking it.
The Maslenitsa Festival takes place with the spring just around the corner. It’s a great opportunity to learn more about Russia and the Eastern Slavs, too. 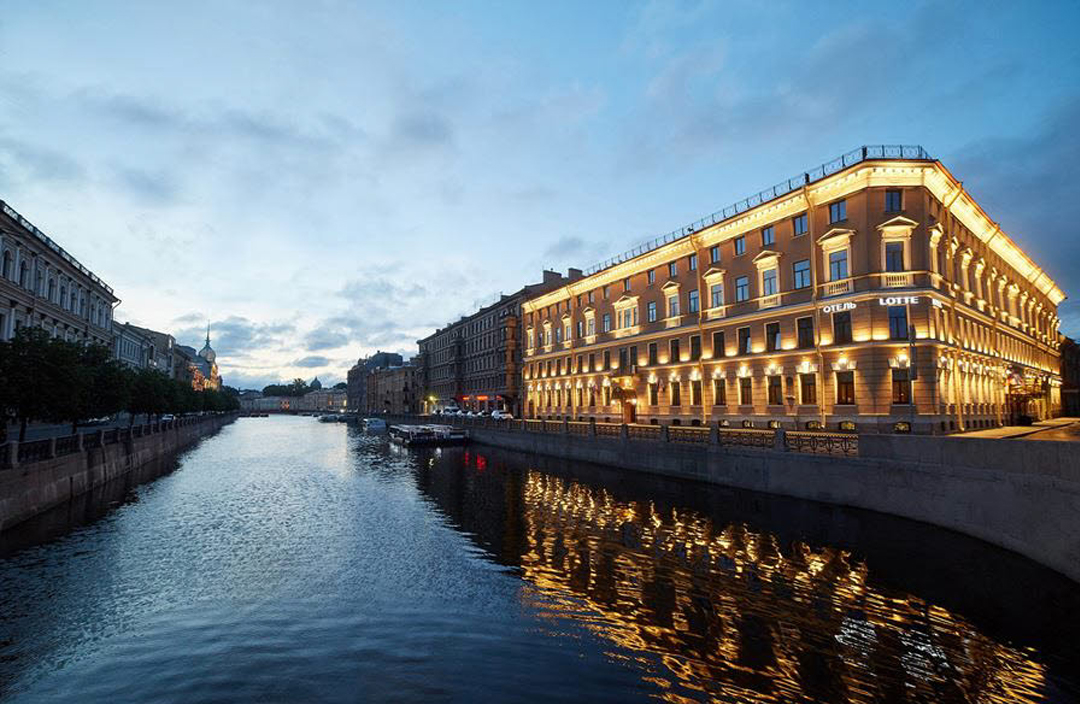