Geumjeongsanseong Fortress Dulle-gil Trail
We walked along the fortress on the ridges of Mt. Geumjeong and took in the view of Busan. We also enjoyed natural surroundings of the mountain and had delicious food nearby. Dulle-gil at Geumjeongsanseong (Mt. Geumjeong Fortress) awakened our five senses.
Geumjeongsan (Mt. Geumjeong) is the tallest mountain in Busan. Locals frequent this hill for hiking. The mountain is named so because, according to legend, a gold fish rode a five-colored cloud from above and played in the well there. Godangbong (801.5 meters) is the highest peak, with Janggunbong standing to the north and Sanggyebong located on the south. They border on Geumjeong-gu, Buk-gu and Dongnae-gu of Busan, and Yangsan of South Gyeongsang Province. 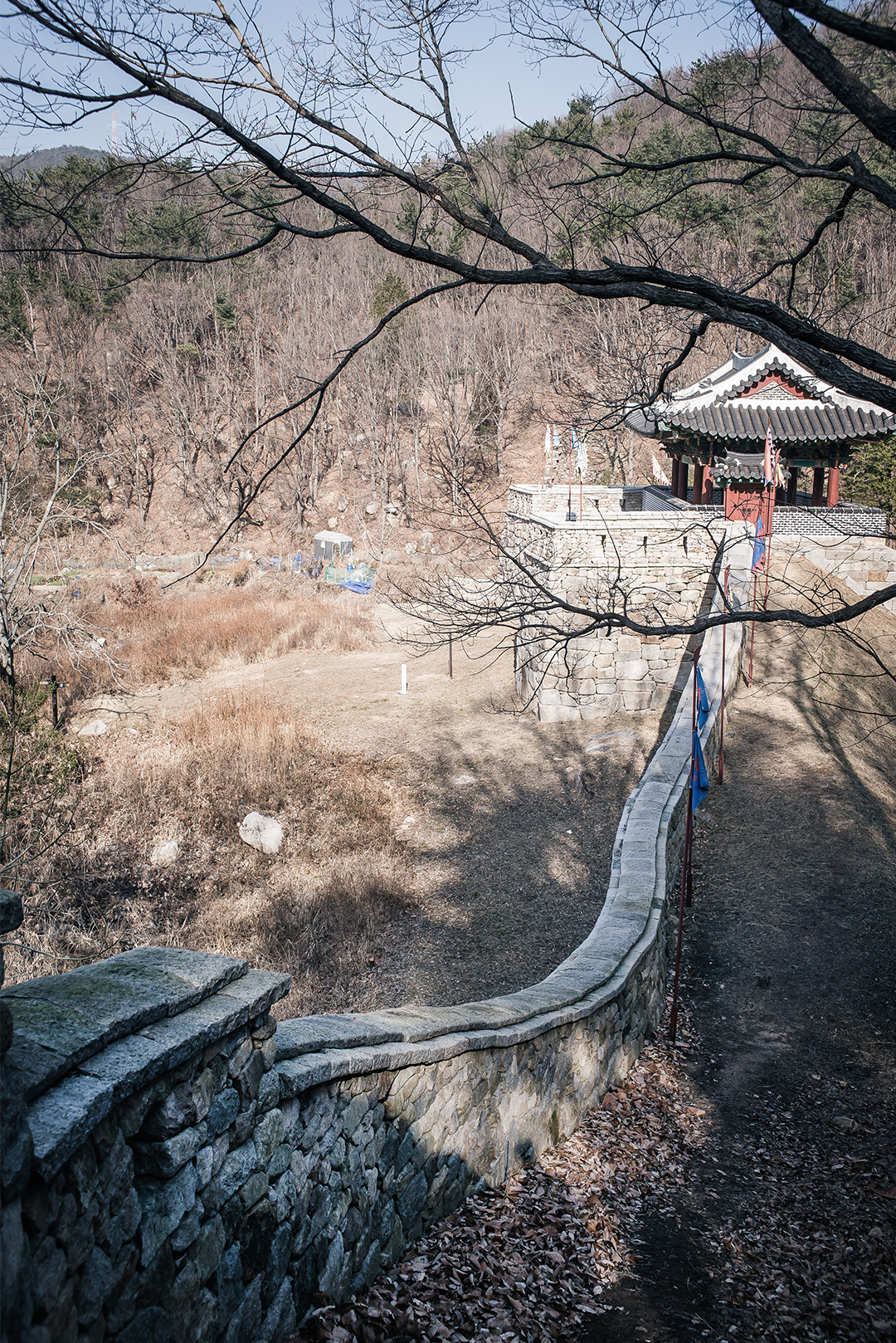 Path by the wall stretching along the West Gate of Geumjeongsanseong

Mountain Covered in Turtles and Terrapins
Geumjeongsan is best defined by the expression ‘Cheongumanbyeol,’ which translates to ‘being covered in 1,000 turtles and 10,000 terrapins.’ Indeed, with rocks and peaks scattered all across, the mountain does look as though it’s overflowing with those turtles and terrapins.
People visit this mountain from all around the nation not just to enjoy the spectacular views of its natural surroundings, but also to see the famed Beomeosa (Beomeo Temple). Built by the Great Priest Euisang during the King Munmu era of the Silla Dynasty, Beomeosa is considered among the finest Buddhist temples in the region, alongside Haeinsa and Tongdosa.
Busan locals also enjoy their walks on Dulle-gil around Geumjeongsanseong, The fortress stretches for well over 18 kilometers, and the walls stand between 1.5 meters and 3 meters high, as the tallest fortress in Korea.
Historical documents show that Japanese military frequented invaded the area during the Silla period. The fortress was apparently put up then, though there is no particular evidence to back that theory. The fortress that we see today had its ground broken by Dongnae Magistrate Park Tae-hyang in Year 29 of King Sukjong’s reign during the Joseon Dynasty. Records show that another Dongnae Magistrate, Oh Han-won, rebuilt the collapsed section of the fortress during the eighth year of King Sunjo. Restoration work is still ongoing today, based on other historical materials. 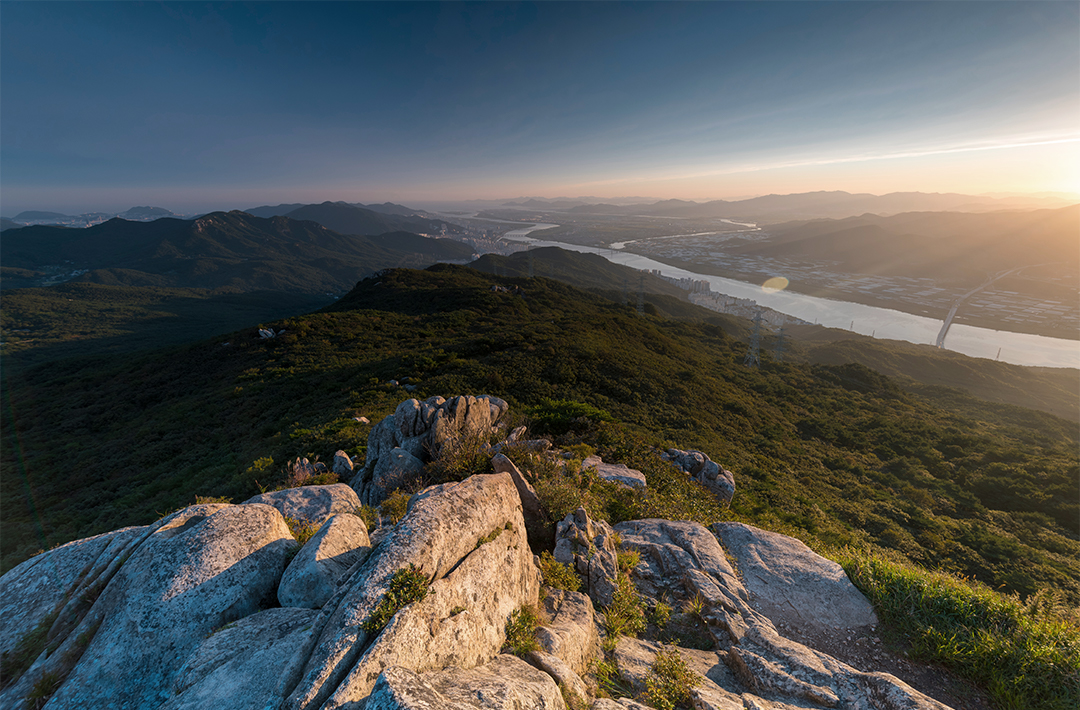 Nakdong River flows along the west side of Geumjeongsan. 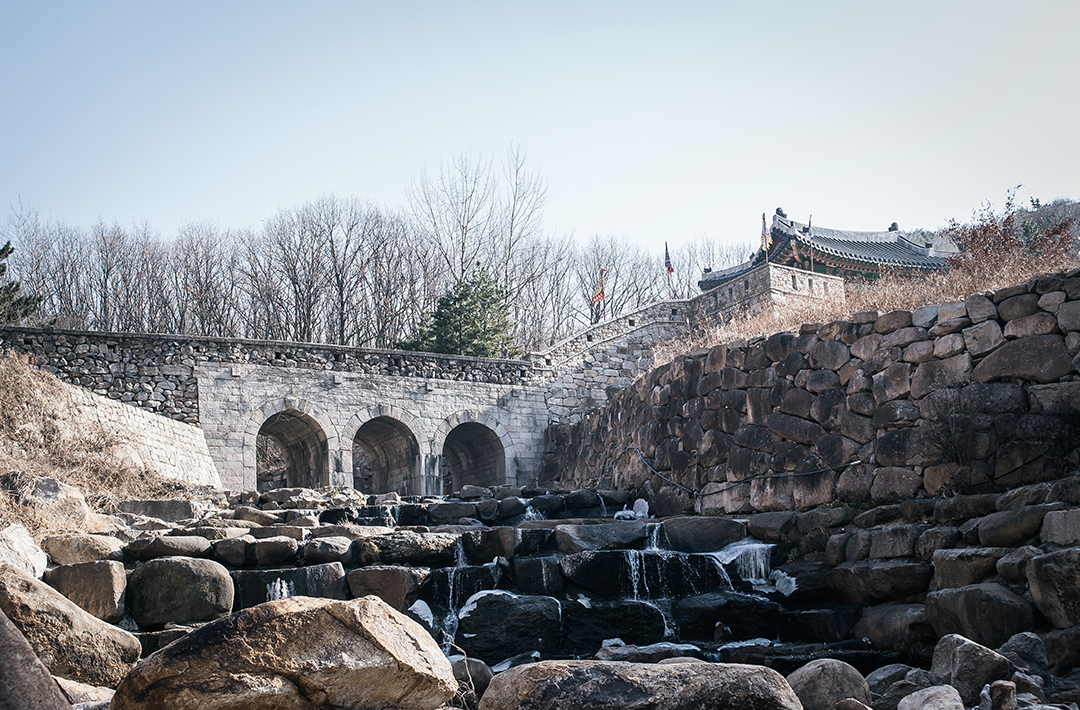 How to Enjoy Geumjeongsanseong
Covering the trail in its entirety in all directions is no cakewalk, so you should plan your route beforehand. You can either begin your journey from the starting point, or drive up to one of the four main gates and start from the midway point. You can even take a cable car up the hill.
If you’re starting from the fortress, the most popular path goes from the East Gate and through the Fourth Watchtower and Euisangbong and finally to Beomeosa. It stretches for about 3 kilometers one way, and a little under 6 kilometers for a return trip. The trail is relatively flat and you will get to enjoy a wide variety of gorgeous natural backdrops along the way. 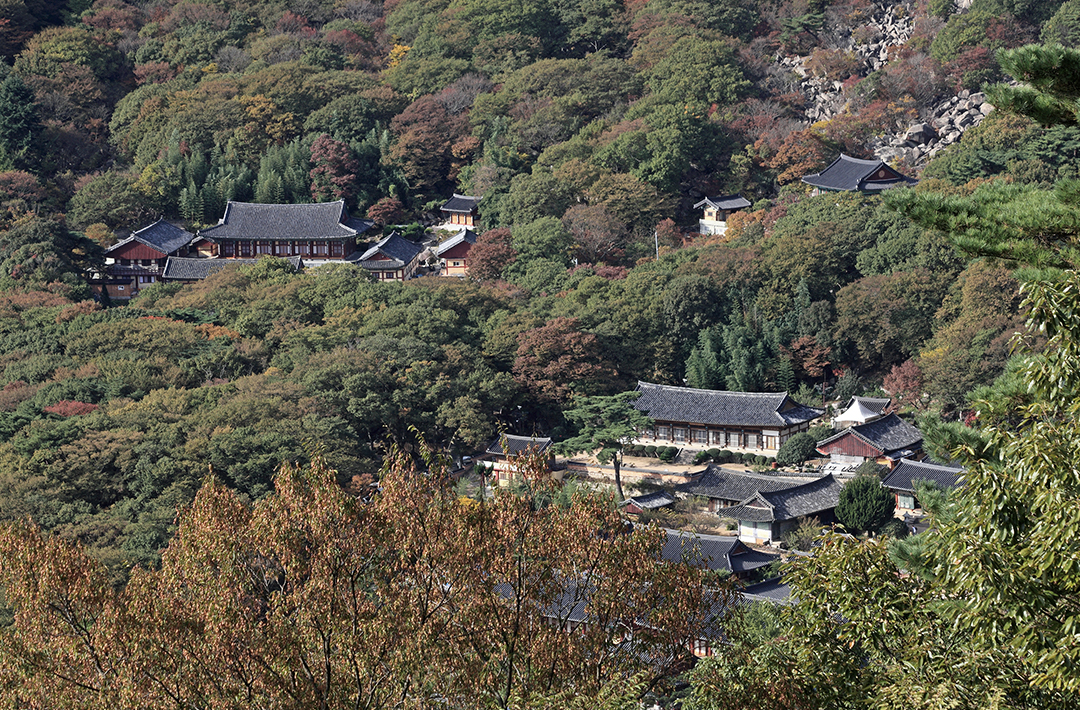 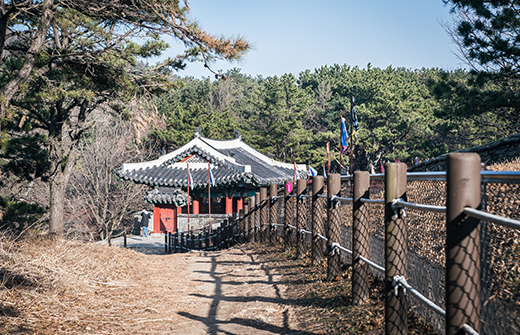 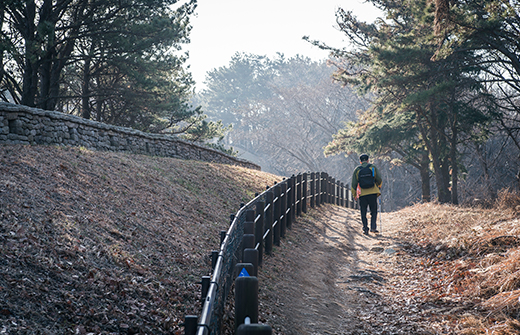 Path along the East Gate of Geumjeongsanseong

The path that starts from Beomeosa and takes you to the North Gate and Godangbong is another fairly easy route. Of the four gates, the North Gate is the most rugged. Others also look a bit out of place at this otherwise beautiful fortress, but the North Gate in particular lacks any arched decoration and is fairly small. Locals probably didn’t have the time or presence of mind to spruce up the gate, not after the whole area was destroyed during the Japanese invasions between 1592 and 1598. When Japanese troops wanted to move from Dongnae to the castle, they had to pass through Geumjeongsanseong. The fortress also provided the setting for a scene during the popular Netflix series .
Once you get past the North Gate and reach Godangbong, you will have to decide whether to keep on walking or return to the temple. If you aren’t properly equipped, whether physically or mentally, then you should head back to Beomeosa. The path connecting the North Gate and the West Gate is longer and more treacherous than others. And even if you come to regret midway through, it’ll be hard to turn back then. 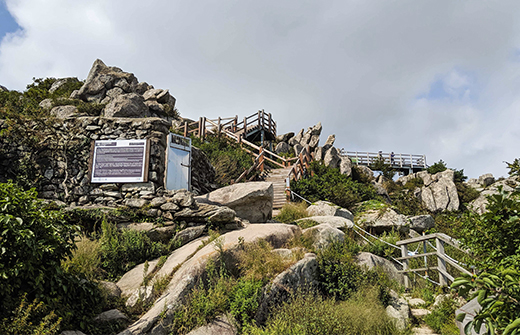 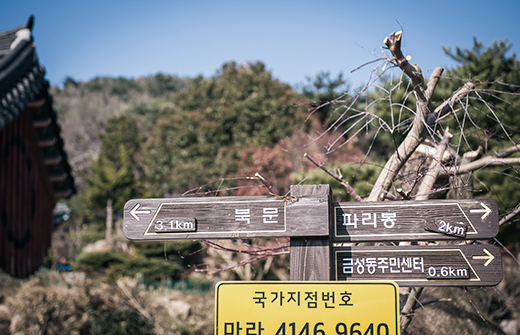 Signs that help you measure distances between different spots

Delicacies: More Reason to Visit Geumjeongsanseong
There are plenty of other reasons to travel to Geumjeongsanseong, other than to climb the mountain and walk on Dulle-gil. There is no shortage of great restaurants and cafés, and other attractions in the area.
Surim Sikdang is a popular eatery for hikers coming down after an early morning walk or for visitors to a nearby Geumgang Park. Its signature dishes are tantanmen and egg plant dumplings. The rich but not oily broth will warm you back up after a long walk on a cold morning. Egg dumplings come fried, with pieces of meat snuggled in between egg plants. You will see a long queue formed outside before the restaurant even opens at 11 am It’s a tiny place, and it’s also known to serve the best tantanmen in Busan. 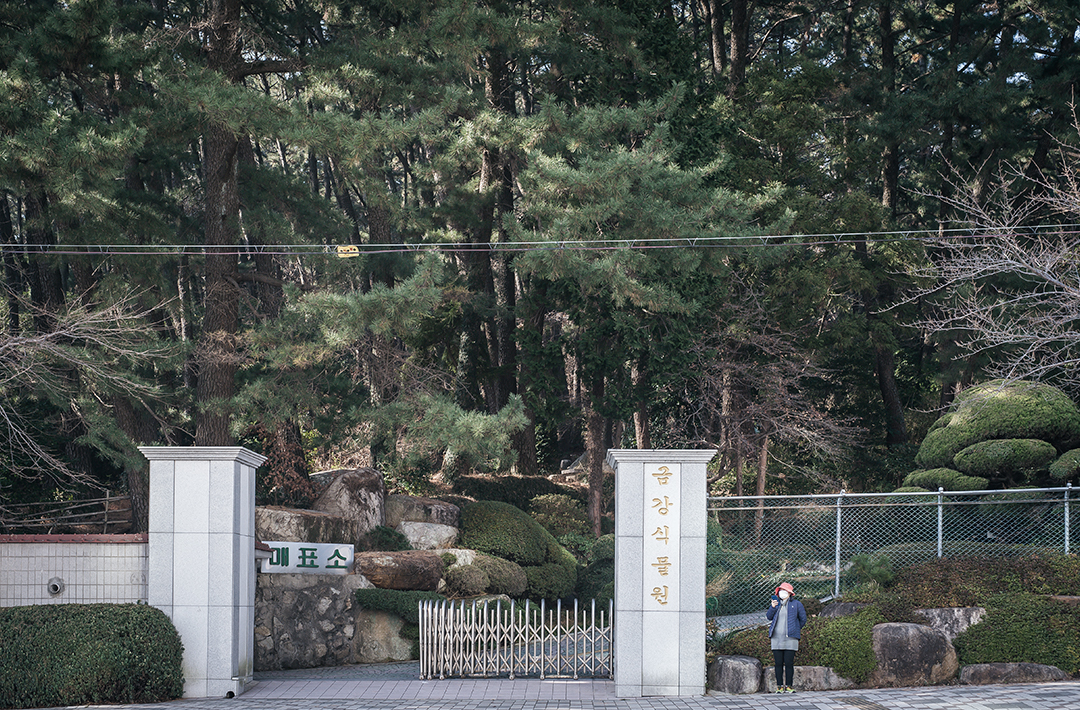 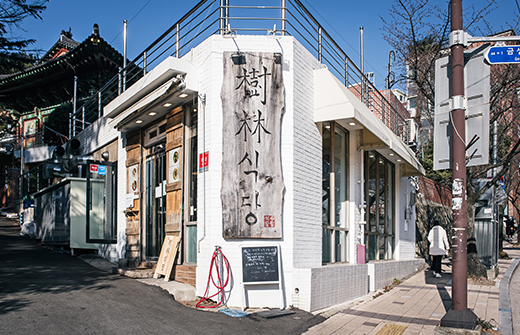 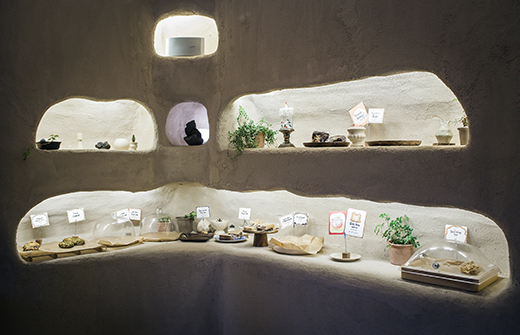 Across Surim Sikdang are Geumgang Botanical Garden and Geumgang Park. The garden opened in 1969 as Korea’s first public botanical garden, and is home to some 2,300 species of plants. You will see well-manicured gardens with a wide range of species elsewhere today, but some 50 years ago, this was an unusually large garden that must have been like an oasis for Busan residents.
The park is just a bit farther down the road. At 55 years old, the park has been designated for preservation as cultural heritage by Busan. You can get on the cable car from here to reach the top of Geumjeongsan. Sosa Bakery is located between the park and Beomeosa and is especially famous for pound cakes of different flavors and rich milk tea. The street that stretches from Beomeosa Station on Busan Subway Line No. 1 to the temple itself is called Beomridan-gil. It’s dotted with cafés but the street isn’t as long as you may think.
Geumjeongsanseong’s Dulle-gil is one of Busan’s “Five Trekking Challenge” courses, along with Suyeongman Course, Osiria Coastal Trail, Haeundae Green Railway and Dadaepo Ecological Trail. Getting on one of these tracks is the best way to enjoy natural settings of Busan and soak in the city with all of your senses. 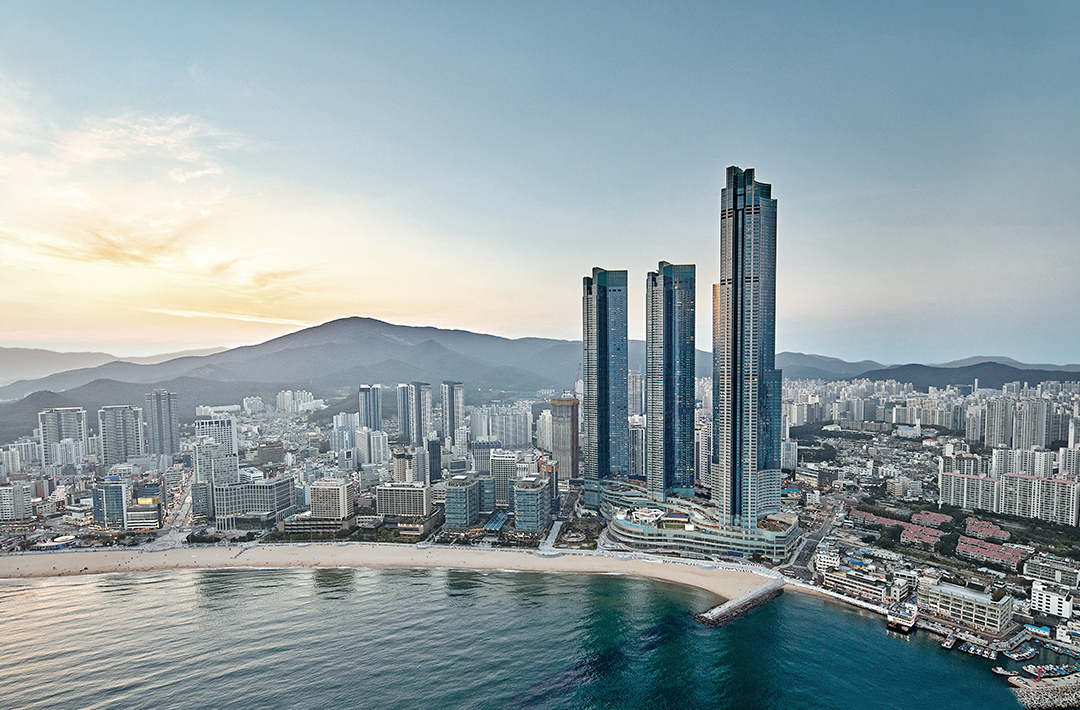