Sevkabel Port, From Industrial District to Culture Square
If asked about the hippest neighborhood in St. Petersburg, young Russians will answer ‘Sevkabel Port’.
“Dad, there's an even trendier place than that!”
After talking about the fresh shock I had felt at Loft Project ETAGI, my daughter introduced me to Sevkabel Port.
“No way, there is a place like that in Vasilievsky Island?”

The place my daughter explained was where I used to frequent for a cheap car wash. Situated in the red-brick factory district near the port, it was a dated and isolated area where not a lot of pedestrians were seen except for those who worked in the area. Who would have thought there could be a walking trail in such a place? I used to visit Vasilievsky Island on business, and I did not recall seeing anything extraordinary, because the street was a short-cut route without even a traffic light. Half in doubt, I decided to check out the area. In my memory, massive, old red-brick buildings that looked like gloomy prison camps lined the corridor, making it impossible for anyone to expect a pleasant space behind. Passing the entrance, however, I couldn’t shut my mouth this time. A new world unfolded before my eyes. 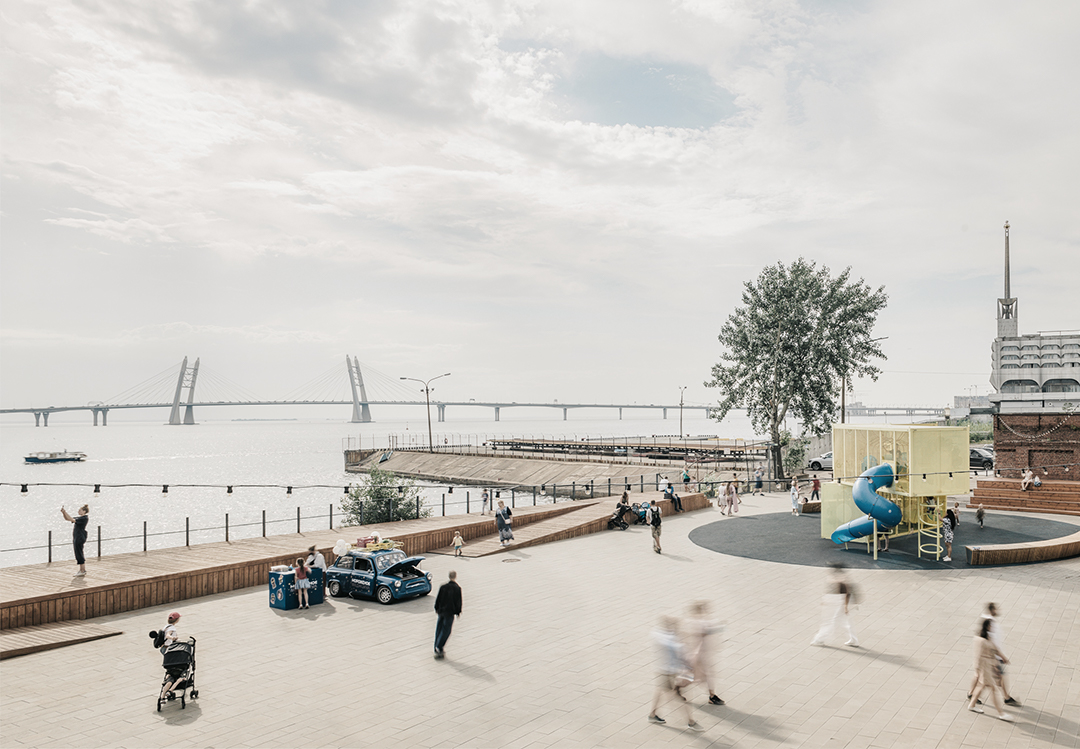 Transformation of Industrial Port
Converted into a cultural space now, Sevkabel Port used to be a cable manufacturing plant within an industrial port complex. Built at the end of the 19th century, the plant was owned by a manufacturer which is one of the older businesses in St. Petersburg. A factory run by Siemens, a German maker with a long history, used to be in this area as well. Sevkabel Port had large-scale production facilities on both ends of Kozhevennaya Line, and in 2014 the management decided to modernize the facilities located in Kozhevennaya 39 which was located farther away from the sea. Kozhevennaya 40 overlooking the Gulf of Finland was converted into a culture business space. 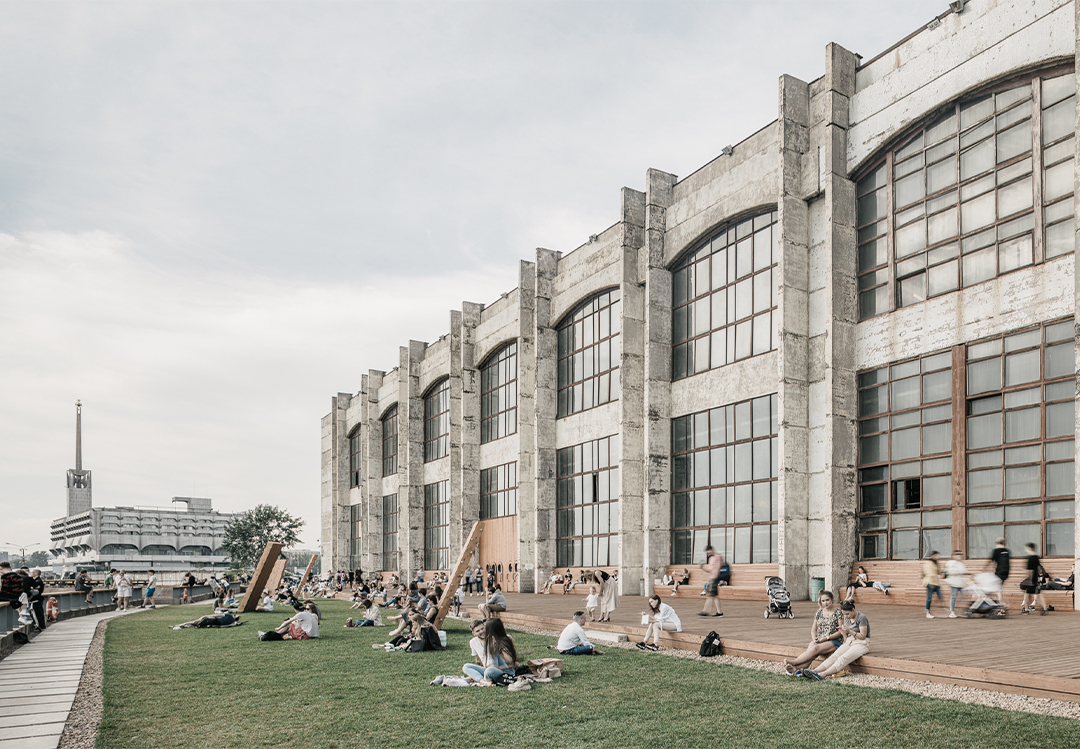 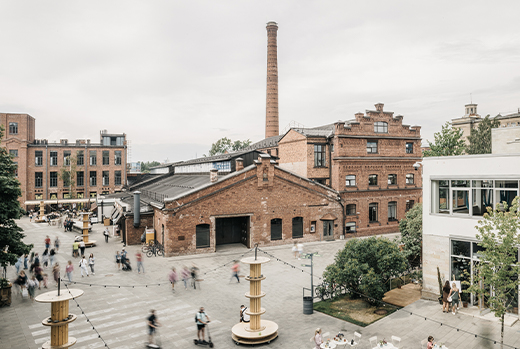 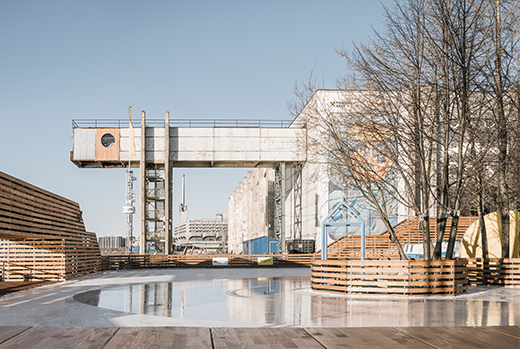 With the 1991 dissolution of the Soviet Union, Russia was faced with a financial crisis. Factories stopped manufacturing, and historic buildings were left abandoned. Decades later with the economic recovery, urban renewal projects came under the spotlight.

Designated as a UNESCO World Heritage site, St. Petersburg does not allow changes to the external appearance of buildings. The only solution to this is to keep the original structure and make modern fixes as needed. The Sevkabel Port project drew its model from industrial zone redevelopment cases undertaken in global cities such as Helsinki, Amsterdam, Stockholm, London, and Barcelona, turning open-air yards, factories, and storages into culture and art spaces. One common aspect about urban renewal projects is how the city’s historical, architectural, and social context is cohesively intertwined with contemporary culture and business needs.

The Sevkabel Port project turned only 20 percent of the existing facilities into a cultural zone instead of demolishing the entire abandoned buildings. Thanks to that compromise, the historic ‘Grey Belt’ at St. Petersburg harbor was successfully transformed into a public cultural and business space. 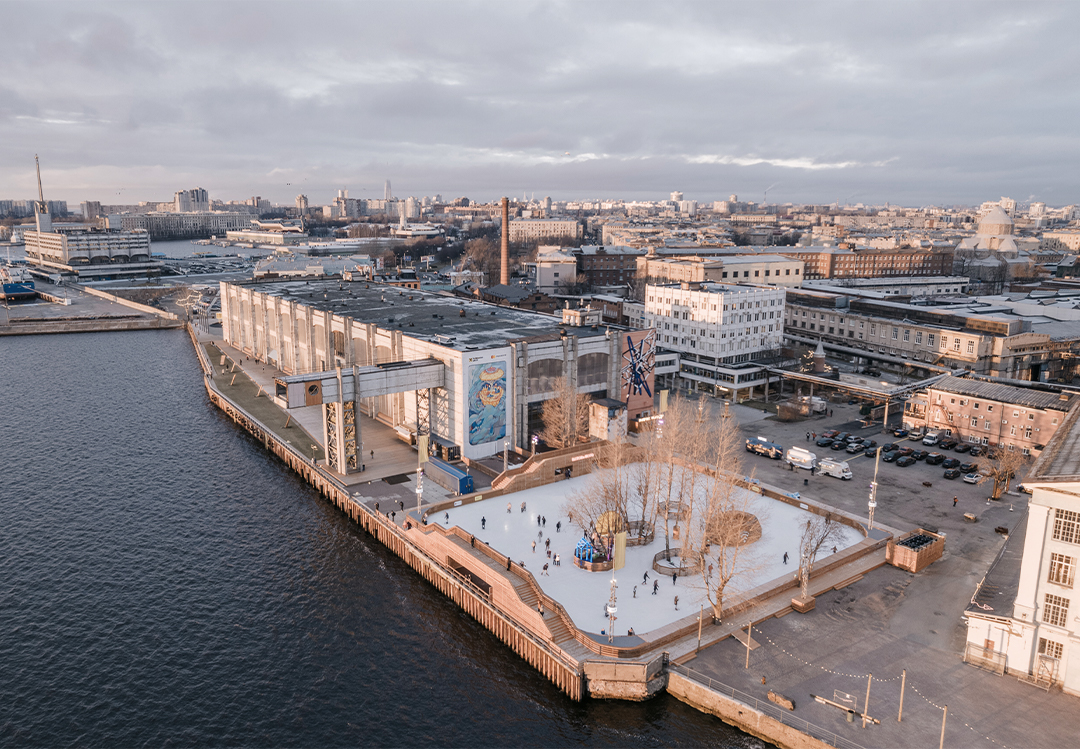 Sea Accessible to the Public Once Again
Although St. Petersburg is a coastal city, its coastal area is occupied by port facilities and plants. This has been an issue because only those who worked in the industrial complex got to enjoy the views of tidal changes in the Gulf of Finland, the expansive bridge crossing the sea, and the cruise terminal. Ironically, people living in St. Petersburg had to go to the outskirts of the city to get those views.

The Sevkabel Port Project gave back the fascinating scene where the city meets the sea to the citizens of St. Petersburg by re-opening the downtown coastal area. Now anybody can take a walk along the seaside 24/7 all year-round. The true change will strike you once you witness people watching the sun setting on a white night as they sit in huddles on the seashore like a flock of gulls in the summer. Made available once again through the Sevkabel Port project, the coastal walking trail is now part of a new routine for people of St. Petersburg. 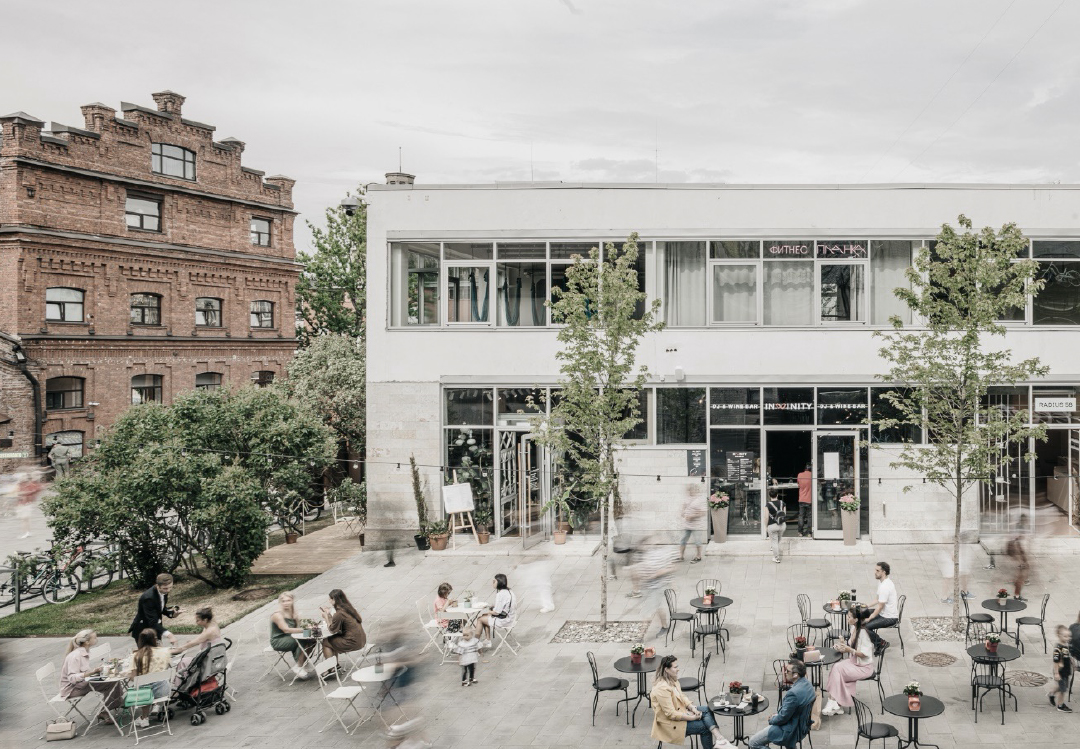 Events at Sevkabel Port Factory
There are over 600 rounds of events taking place each year at Sevkabel Port. Various creative groups get a chance to express themselves. The renovated area presents craft studios, offices, exhibition and concert halls, sports facilities, children’s studios, shops, showrooms. restaurants, cafes, and bars. Open to the public all year long, the space is now a place of unique experiences and pastime for the citizens thanks to diverse events and artists’ experimental performances taking place throughout the four seasons. 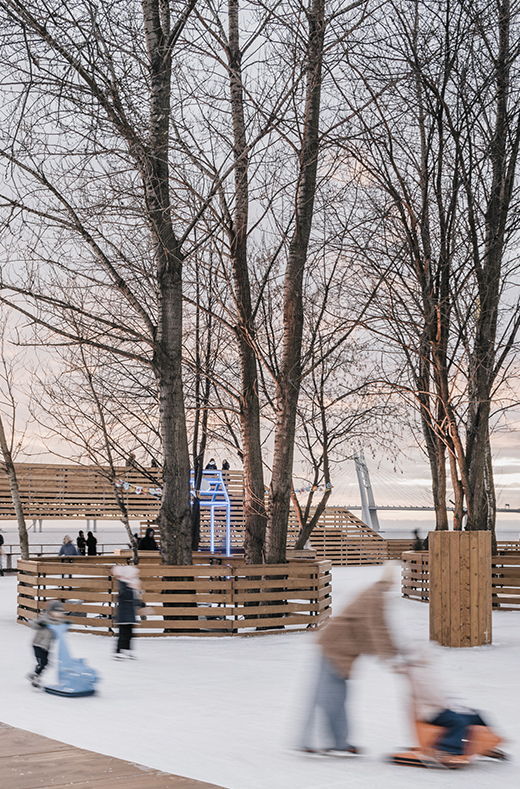 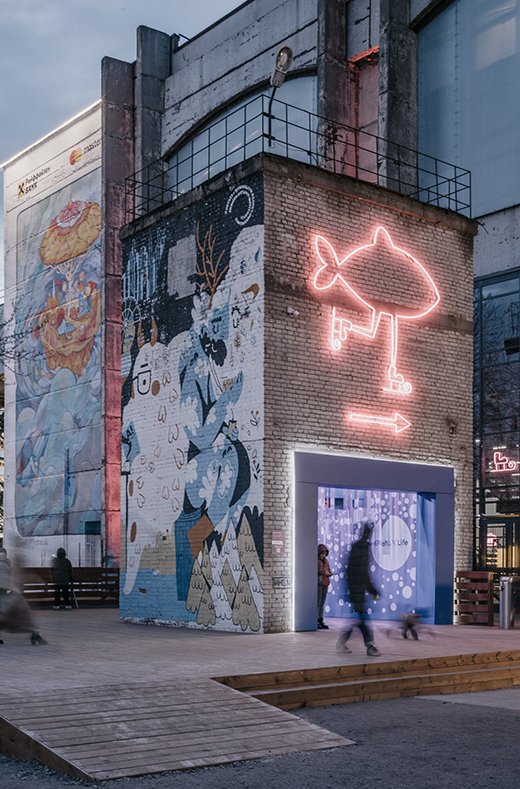 Visitors can try using the solar calendar, a public sculpture installed on the beach. In winter, temporary ice rinks open for skating. Along with restaurants and cafes, food trucks also deliver flavors from all around the world. You can learn various handicrafts, immerse yourself in contemporary art by checking out art exhibitions, and watch jazz, semi-classic concerts and pop concerts offered almost on a daily basis, enjoying the city’s night culture. 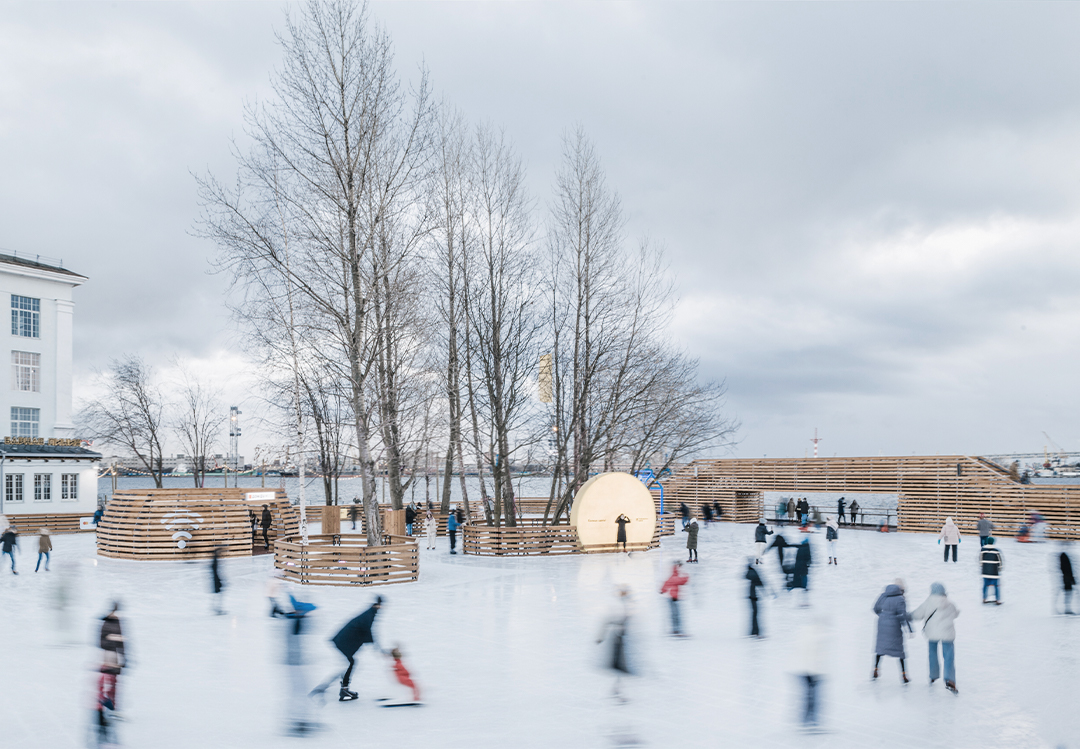 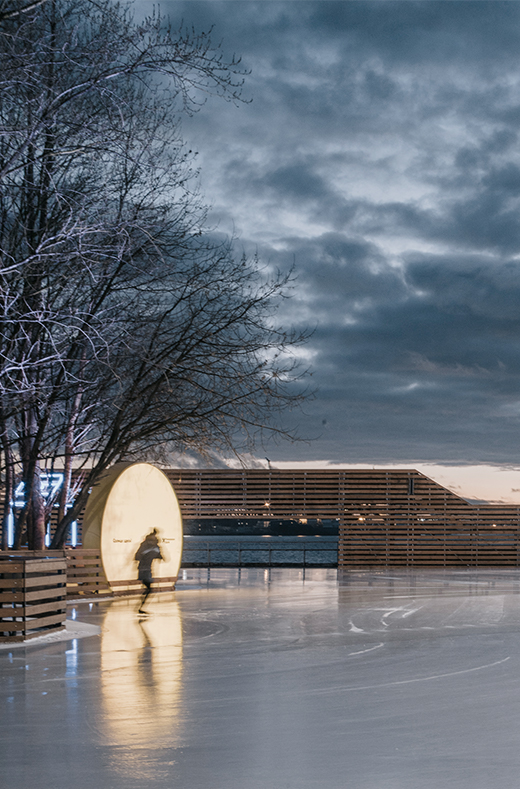 How Cities Beckon Travelers
Since it was launched in September 2018, Sevkabel Port has continued to grow. Renovation is still in progress. Now the entire factory buildings are being modernized to welcome new residents. The Arctic Research Museum and Coastal Observatory will be among them.

Having studied architecture in university, I have heard over and over that ‘context’ is important. The appearance of a modern city differs greatly from the past. It’s because as humans evolved, we chose to prioritize function over aesthetics in deciding the value of architecture. Perhaps as a reflection on that, modern architecture today focuses on how to balance the historic and social aspects of a place upon redevelopment. 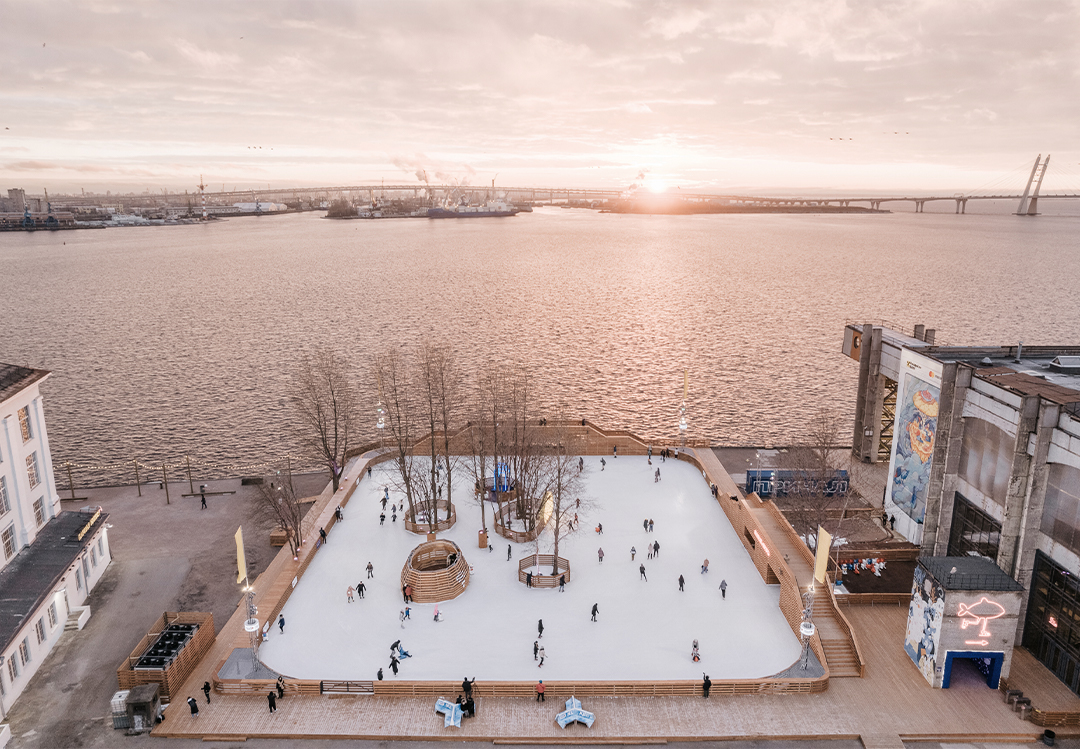 Sevkabel Port offers a new culture and service through a careful renewal of a dilapidated industrial complex while keeping the memory of the port’s history. At the same time, the re-opening of the coastal area to the public shows how urban redevelopment can improve the quality of life for citizens. It’s also why young people of St. Petersburg frequently head over to Sevkabel Port. 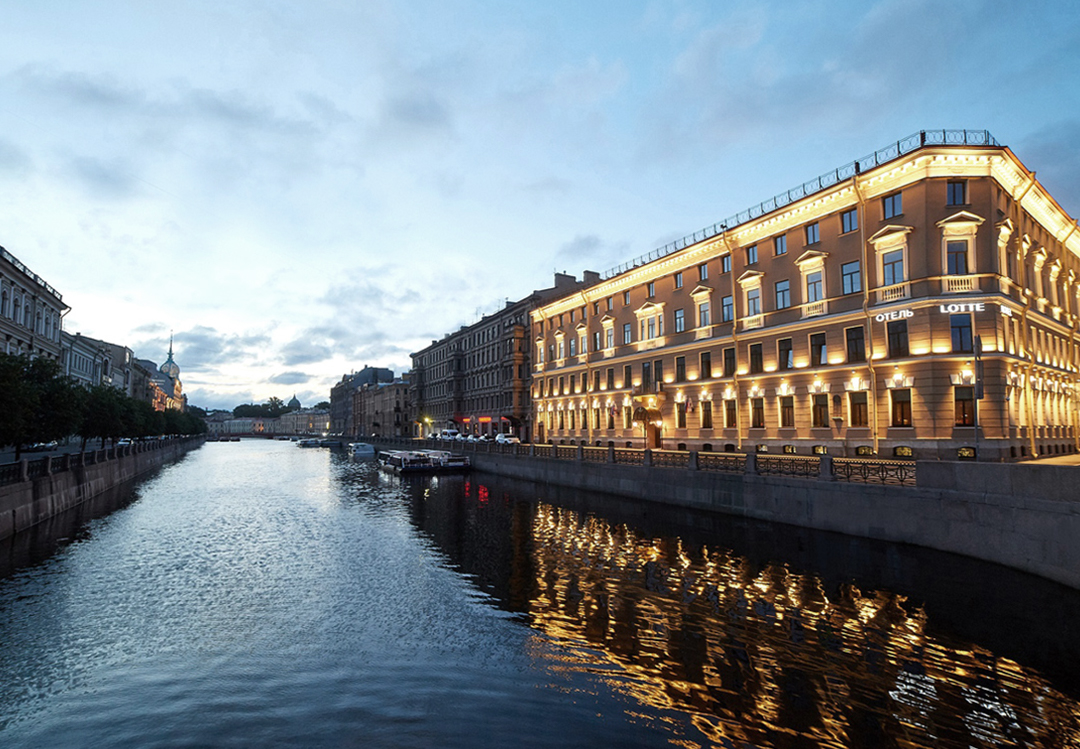