[DAYTRIP] A Rest Named Daejeon
A day was spent in Daejeon solely to refresh the mind and body.
I took a trip to Daejeon to see its mountains and hot springs. Just like how rests make music complete, mountains and hot springs bring peace to the weary soul and body. This spring, free yourself from the heavy pandemic and winter stress using the healing powers of a forest and a natural hot spring in Daejeon, a city full of spring colors. 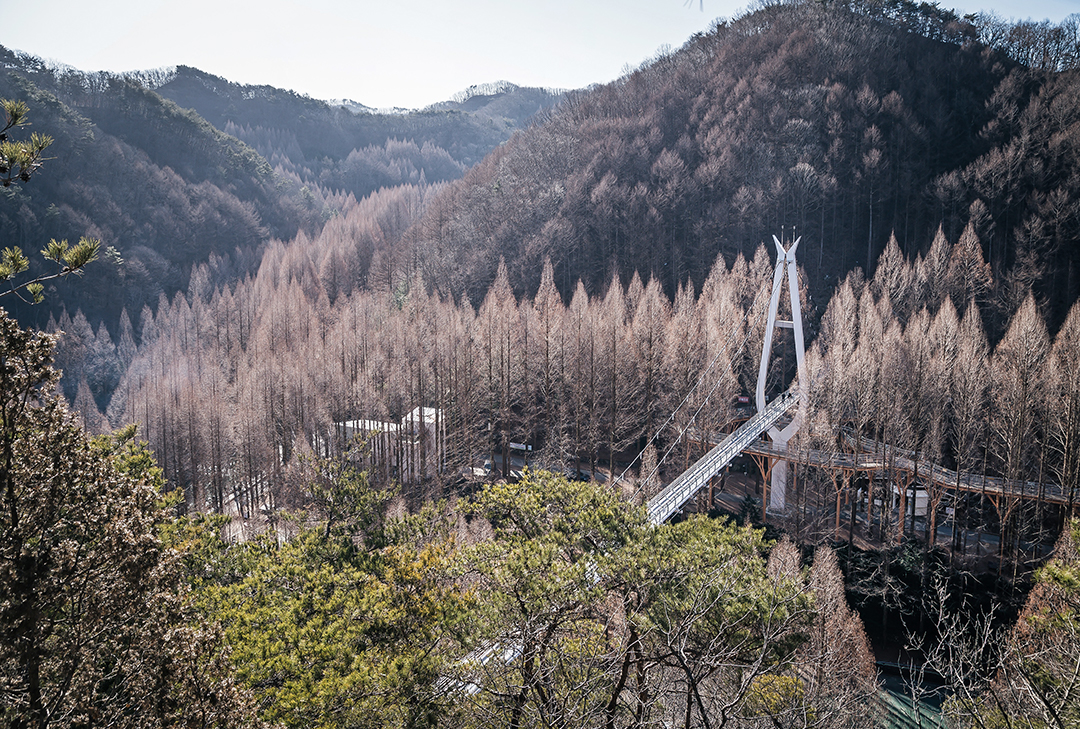 [08:00 AM] Forest Bathing at Recreation Forest
Daejeon is a city located in a basin surrounded by mountains. The city is nestled among several mountain ranges through which Daejeoncheon River, Yudeungcheon River, and Gapcheon River flow like lifelines. Following Gapcheon to the south of downtown leads you to Gubongsan Mountain, and continuing on that route will direct you to Jangtaesan Recreation Forest. One of the top 12 tourist destinations of Daejeon, Jangtaesan Mountain, located in Jangan, Seo-gu, stands 374m above sea level and features stunning scenery. 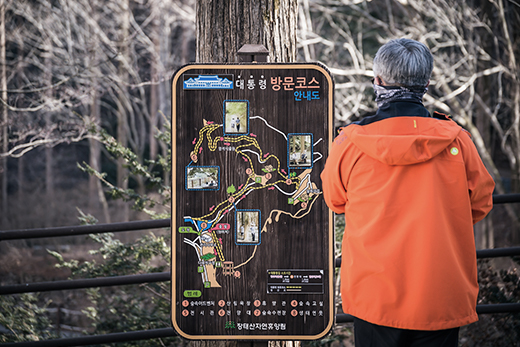 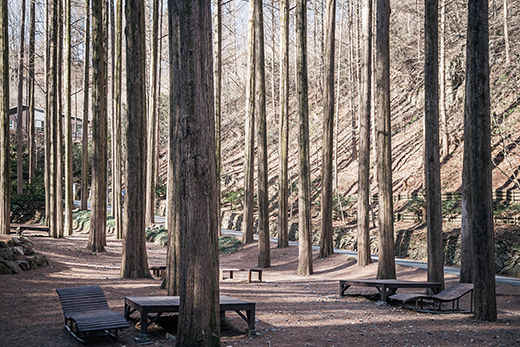 Jangtaesan Recreation Forest is the first recreation forest built privately in Korea. In 2002, the city of Daejeon bought the property, turning it into a city-run facility. From the parking lot, you can find several wooden stairs. The steep path to the right is a direct route to the observation deck of the forest, or choose the wooden stairs to the left and cross the Skyway(suspension bridge) to enter Jangtaesan Recreation Forest. 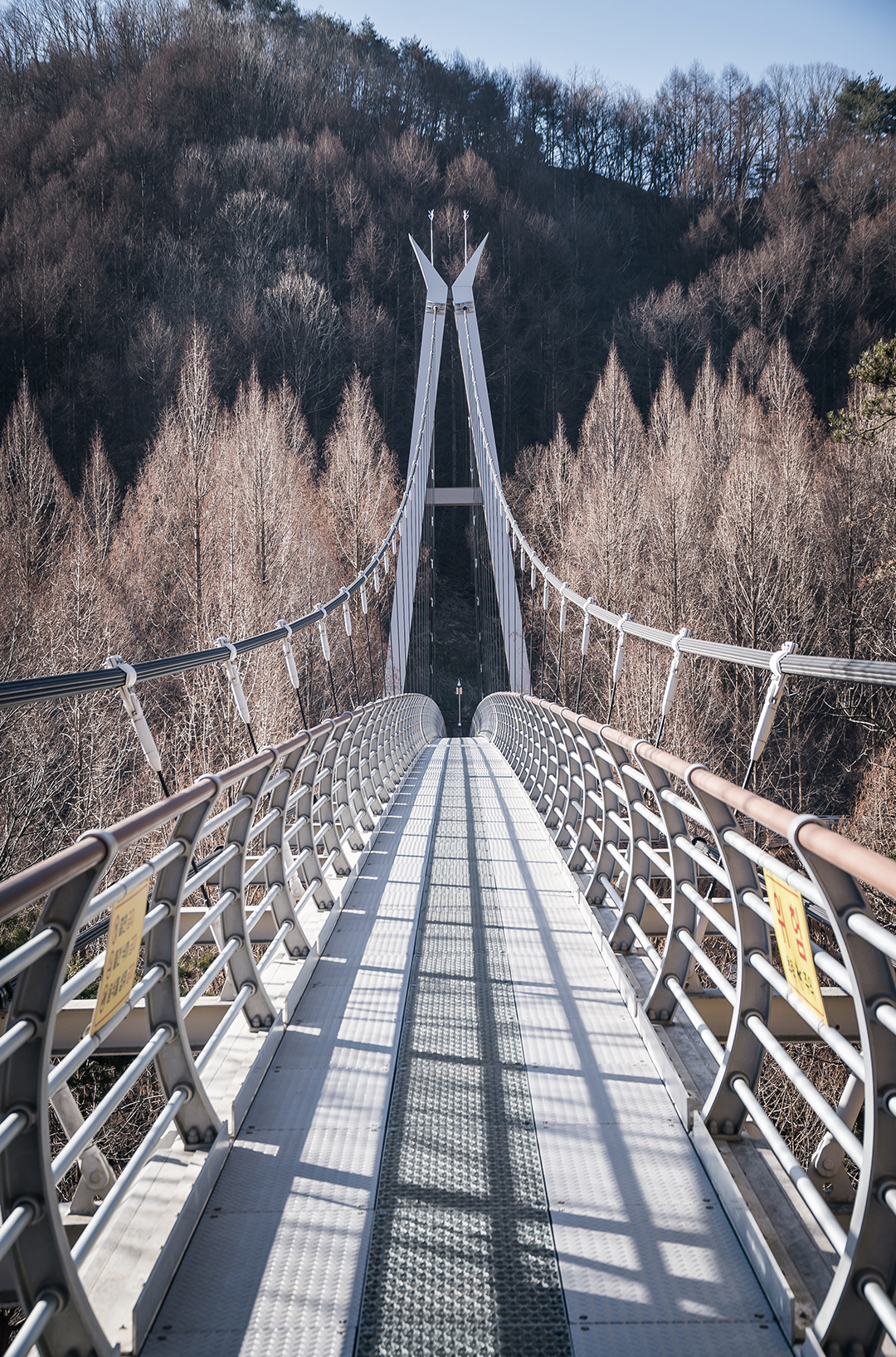 There are diverse facilities at 810㎡-wide Jangtaesan Recreation Forest, such as an ecology pond, acupressure trail, textbook botanical garden, forest adventure space, playgrounds, and a multi-purpose ball park. The highlight, however, is the Metasequoia Walks. The grand scene of 6,300 metasequoia trees that have survived over 40 years since the 1970s, stretching up towards the sky will wash away fatigue from your eyes and mind. Every step taken among the towering trees is followed by a unique scent of the forest that engulfs your whole body. It is what is familiarly known as ‘phytoncide.’ Phytoncides help with soothing your mind and strengthen your peripheral vascular health as well as heart and lung capacities. Taking a slow walk in a space filled with ever-growing metasequoia trees, entrenched in the fresh forest air, you will come to realize what a true healing experience is.
Address 461 Jangan-ro, Seo-gu, Daejeon (Jangtaesan Recreation Forest Office)
Phone +82-42-270-7883 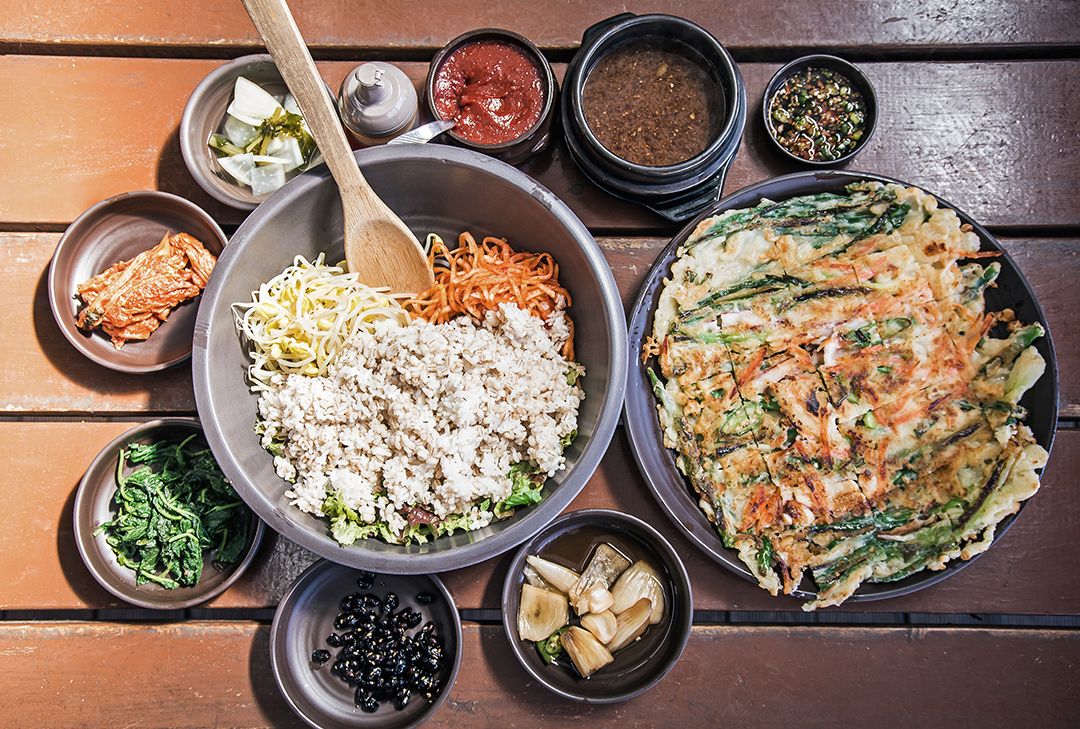 [12:00 PM] Enjoying the Healthy Meal of Sangol Boribap.
After spending enough time at the Metasequoia forest, I stopped near Gyejoksan Mountain to have boribap for lunch on the way to Daejeon. I was in the mood for a simple yet healthy meal. At a five-minute distance from the red clay trail of Gyejoksan Mountain is a barley rice-specializing restaurant named Gyejoksan Sangol Boribap. The side dishes are served neatly, while the flavorful doenjang jjigae(soybean paste stew) is top-notch. The thick, crisp pajeon(green onion pancake) is also tasty. Try not to expect anything extraordinary. The food served at the restaurant is already so ordinary to us that its flavor is probably ingrained in our Korean DNA. What you do get is ‘injeong,’ the traditional spirit of generosity that Koreans have, felt through the amount of food in a second helping if you ask for it. With each scoop of bibimbap, you’ll see that a very special event is found in our everyday life. When the restaurant parking lot is full, you can park across the street. Jangdong Gamnamu Boribap nearby also has the same menu with impeccable quality.
Address 223-10 Jangdong-ro, Daedeok-gu, Daejeon
Phone +82-42-625-2758
Hours 10:00-21:00(Closed every second, fourth Thursdays) 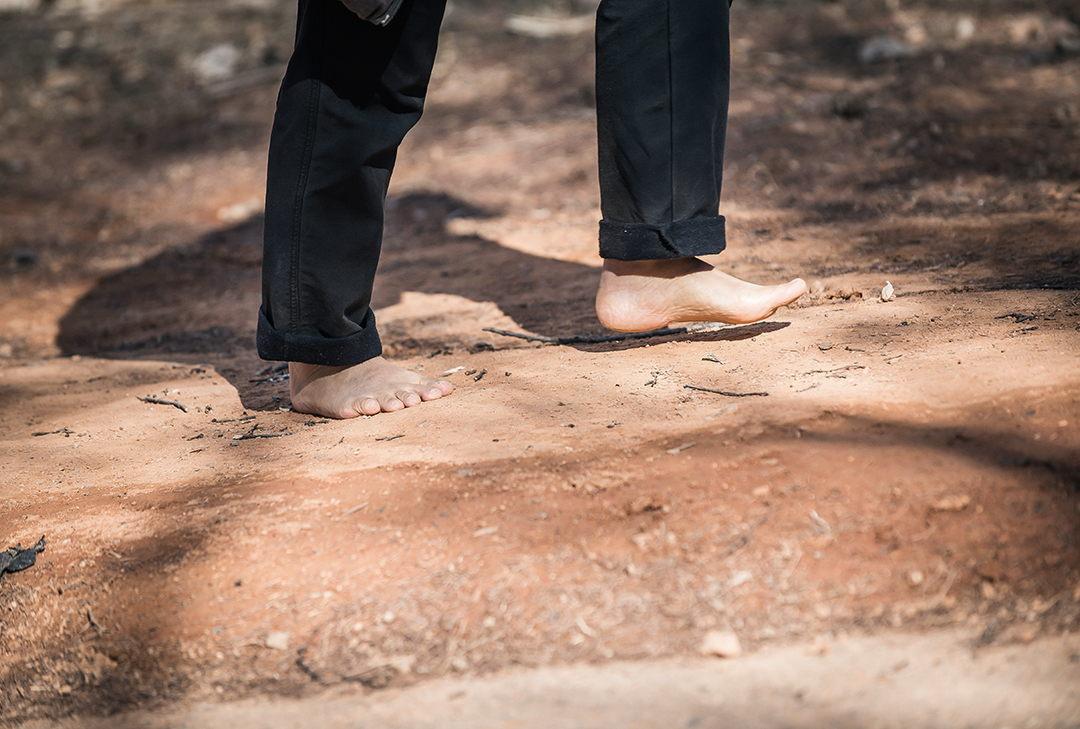 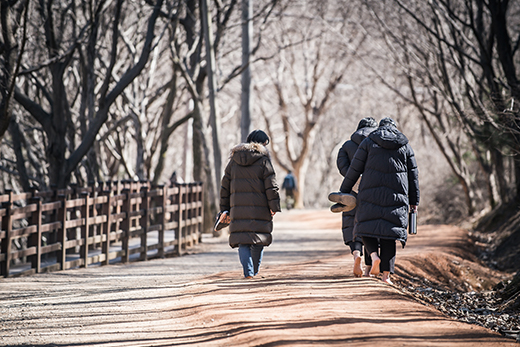 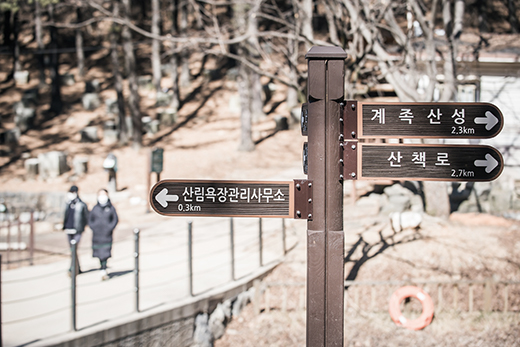 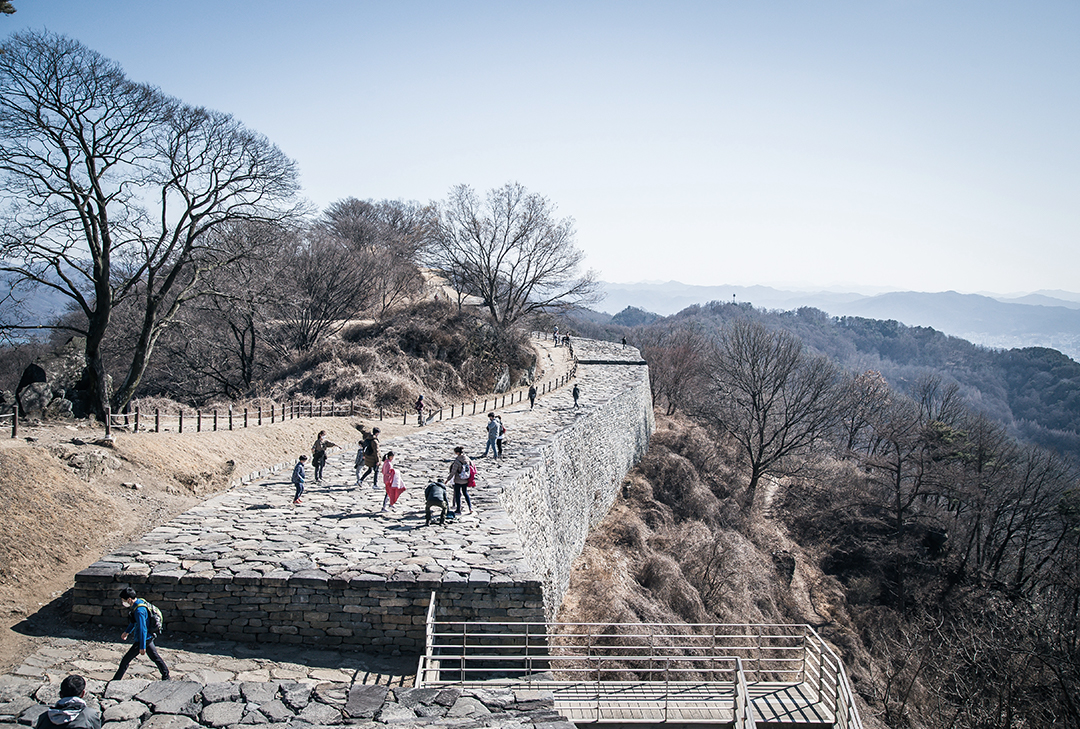 The Gyejoksan red clay trail was formed in 2006 by Cho Wungrae, the CEO of alcoholic beverage company Mackiss, who contributed over 20,000 tons of high-quality red clay to cover the trail. Born in Haman, Gyeongnam Province, he came to Chungcheong Province after he became the owner of a local soju maker in a city that he had no ties with. He happened to hike Gyejoksan Mountain barefoot  one day, and the experience of clay covering his bare feet inspired him. As a return to the community that grew his business, he decided to redo the Gyejoksan trail using red clay. The trail is thoroughly managed, and the foot-washing stations located across the trail make the experience even more satisfactory. The trail stretches 16.5km. It takes about four hours from start to finish, but the trail barely has slopes, making it a less challenging mission to complete the walk.
As I momentarily veered off the circular red clay road, I turned toward Gyejoksan Fortress.  From the entry point of the red clay trail, it takes roughly an hour to get to the fortress. As I neared the destination, I could see downtown Daejeon city as well as Daecheongho Lake. Although its altitude isn’t that high, being on the mountain does provide an excellent panoramic view of the surrounding plain.
Address San91 Jang-dong, Daedeok-gu, Daejeon 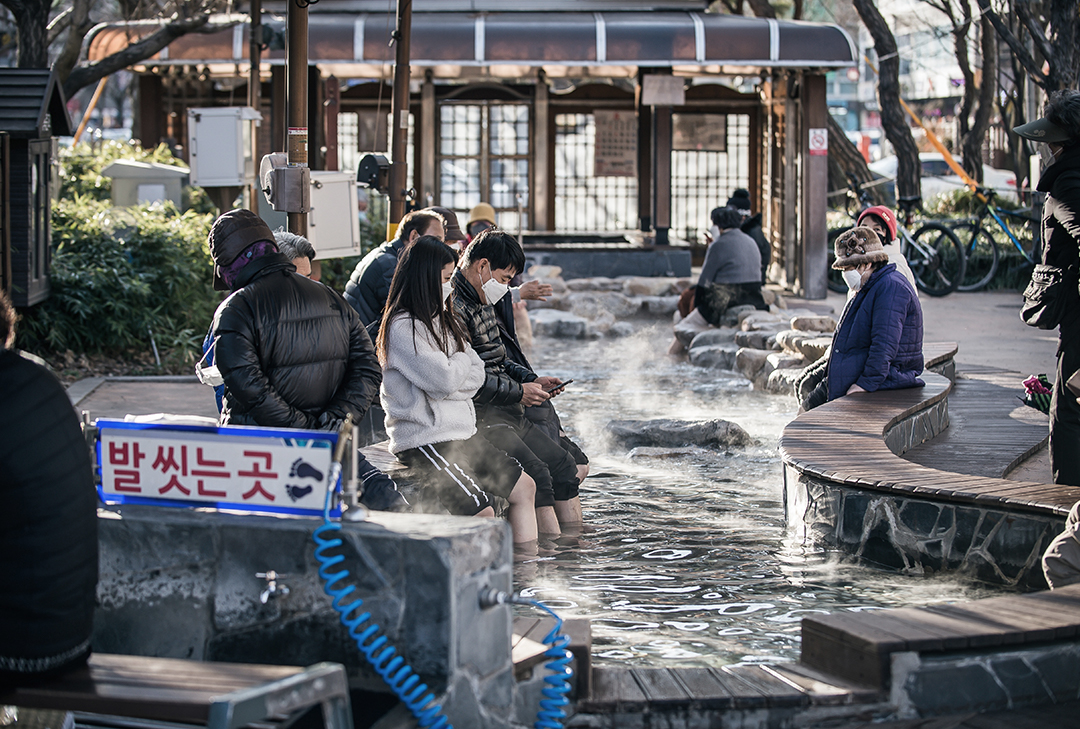 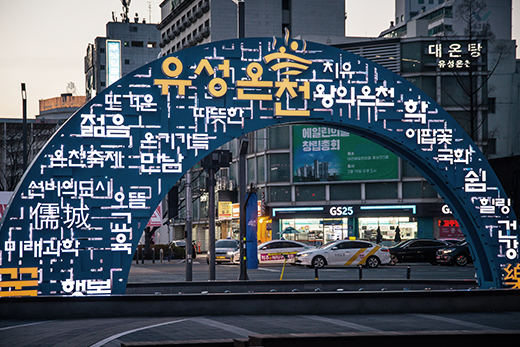 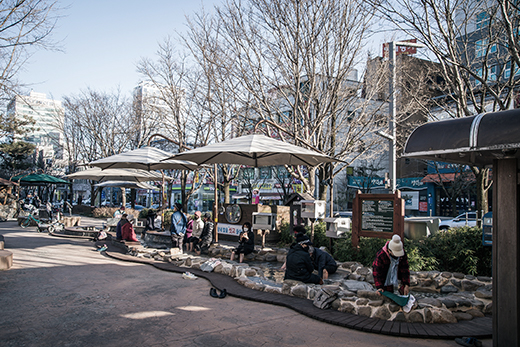 [16:30 PM] Unwinding at Yuseong Hot Spring
Having walked the red clay trail, I felt tired. Before heading to LOTTE City Hotel Daejeon for the night, I decided to stop by Yuseong Hot Spring to unwind. Yuseong Hot Spring has the longest history among 116 hot springs in Korea. The volume of water being consumed and buried underground compares to no other hot springs. Some 60 kinds of healthy minerals and substances are found in the water, so your skin feels almost silky after bathing in it. Historically, King Taejo and Taejong, as well as Han Myeong-hoe, a close confidant of King Sejo, all stayed in Yuseong for a hot spa retreat. It’s good to add a final touch to the healing journey in Daejeon that began from the forest and red clay trails as you soak your body in the hot spring of Yuseong.
There are also free foot spa facilities run by Yuseong-gu District. At these four public outdoor foot spas and an oriental medicine foot bath, the temperature of the spring waters is kept around 41-43℃. Each facility has its own temperature setting. The oriental medicine foot bath provides temperatures that vary according to personal sasang constitutional types. Find out your type before visiting the place.
Address 52 Gyeryong-ro 123beon-gil, Yuseong-gu, Daejeon
Hours 07:00-21:00(winter)/07:00-22:00(summer) 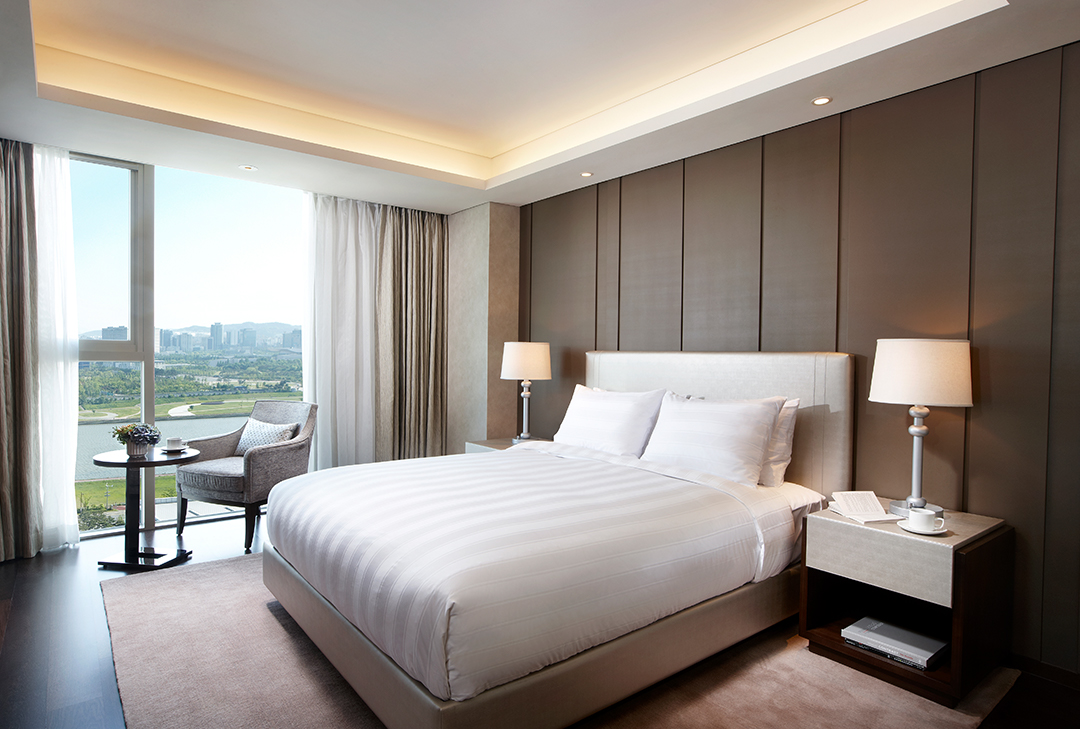 [18:00 PM] End of Day Trip at LOTTE City Hotel Daejeon
After washing away spring dust and fatigue at Yuseong Hot Spring, I headed to the hotel. LOTTE City Hotel Daejeon is located at a 10-minute distance. The business hotel in Yuseong-gu, Daejeon, the mecca of cutting-edge science technology, offers 306 rooms since its opening in 2014. After the check-in, I was able to have a pleasant time at C’cafe, a buffet restaurant on the 18th floor, watching the nightscape while eating a delicious meal. Back in the room, I spent time overlooking the city from the window. It was a day in a quiet yet rejuvenating city. As I sank my body into the comfortable bed, my restful day ended.
Address 33 Expo-ro 123beon-gil, Yuseong-gu, Daejeon
Phone +82-42-333-1000
Website www.lottehotel.com/daejeon-city