Gwangjang Market’s New Playground, 365 Iljang
Gwangjang Market, famous for its gourmet food, now offers a brand-new, exciting space that stays open 365 days a year so that you can visit anytime.
Gwangjang Market is the first permanent market in Korea and a traditional trading market. Having started as Dongdaemun Market which was operated by a group of Joseon merchants who established Gwangjang Corporation in 1905, Gwangjang Market has over a 100-year history. The current name was given in the 1960s. Originally, the market was set to be built between the two bridges of Gwanggyo(wide bridge) and Janggyo(long bridge). Hence, it was called Gwangjang Market after the names of the bridges. After it settled near the Bae O Gae area, the name got a new meaning of ‘gather from afar to keep,’ which remains the same until now.
Items sold at Gwangjang Market come in a great diversity, ranging from the ones for pyebaek(wedding food) and rituals to imported clothing. However, the long-lasting popularity of the market is attributable to its food. The food alley inside the market presents a long stretch of vendors selling street foods and other delicacies, such as bindaetteok, janchi guksu and kalguksu, pan-fried sliced meat, yukhoe, and mayak gimbap.  It’s one of the top gourmet places in the district of Jongno. Perhaps that’s why the market becomes even more crowded on a rainy day. 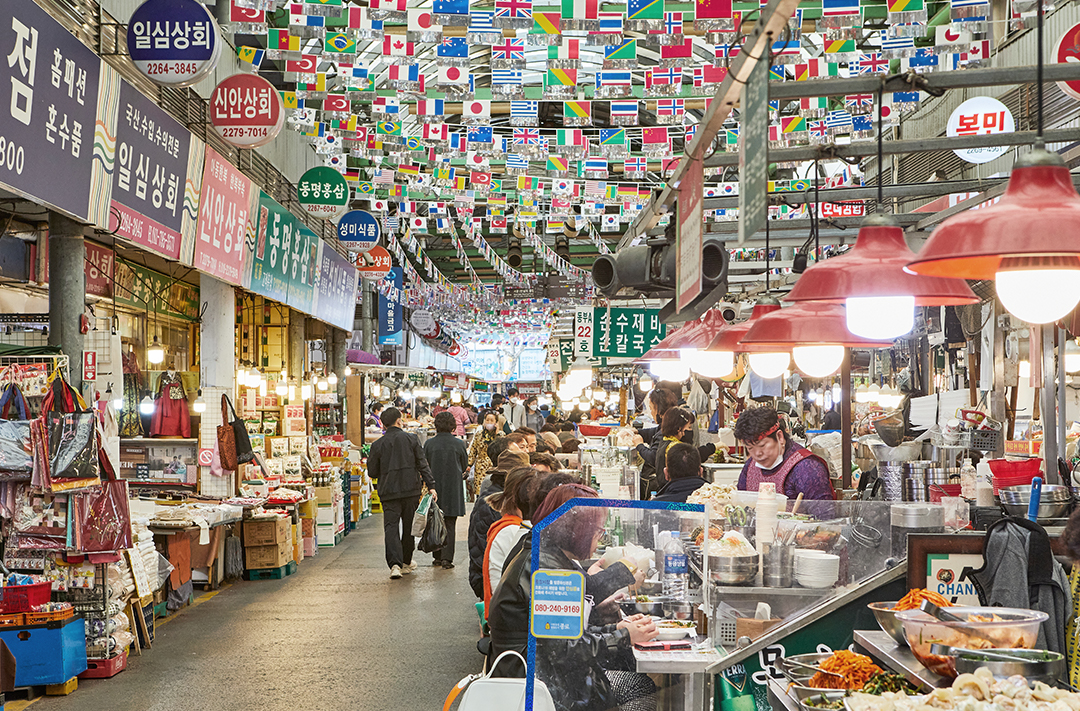 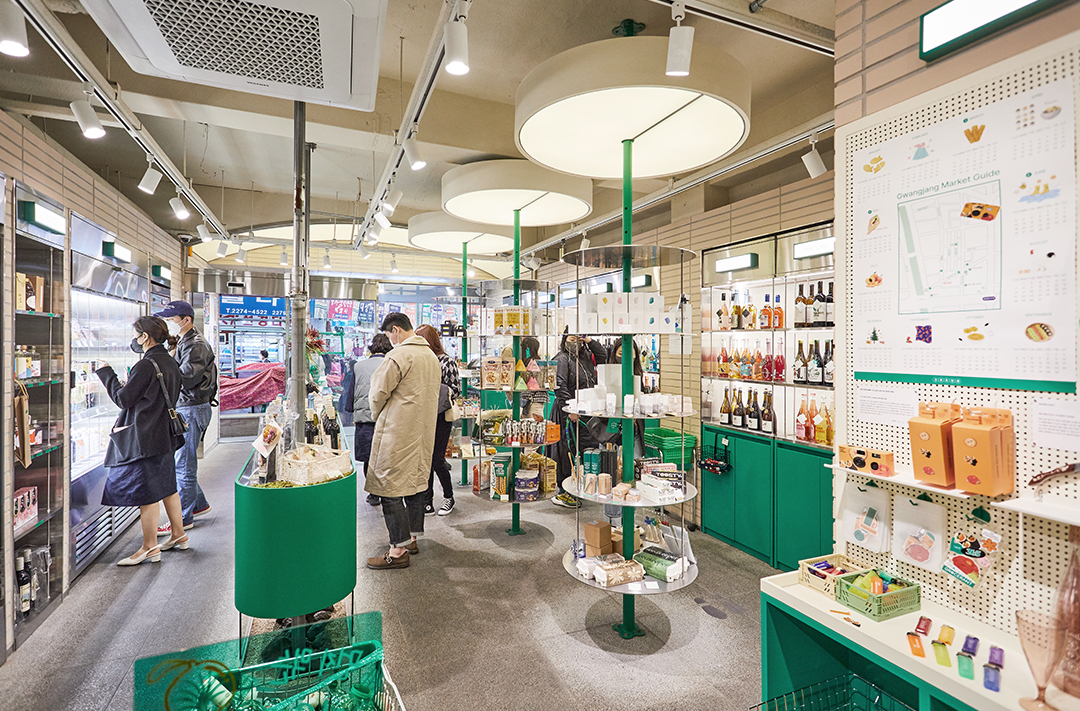 Open 365 days a year, Gwangjang Market attracts a large number of shoppers on weekdays, too.

Coolest Among Trendy Places
A fun space has opened in Gwangjang Market. Known as ‘365 Iljang,’ it is essentially a grocery shop with a modern green neon sign outside, which may not have been expected of a storefront located in an old marketplace. 365 Iljang can be found in an alley near the jeon(pancake) alley, in the direction of South Gate No. 1. Within less than half a year since the opening, the store has become a must-visit place and photo spot among young customers flocking to Gwangjang Market.
The person behind the 365 Iljang success is Chu Sang-mi, CEO of ‘Park’s Mung Bean Pancake,’ an iconic gourmet restaurant in Gwangjang Market with a long history. 321Platform, a brand launched by Chu with an aim to develop new, positive roles that Gwangjang and traditional markets can play in our society, started 365 Iljang. In a four-story building of 321Platform, the first floor is occupied by 365 Iljang, while the second and third are used as an office and R&D center for 321Platform. Lastly, the fourth floor houses a wine bar called Hidden Hour.
Chu Sang-mi found it regrettable that Gwangjang Market, despite its various attractive points, had been consumed as just a symbolic image. Her childhood memories are almost all connected to the market, and she saw the market’s potential to be turned into a successful brand. She also thought if successful indeed, other traditional markets can follow suit. 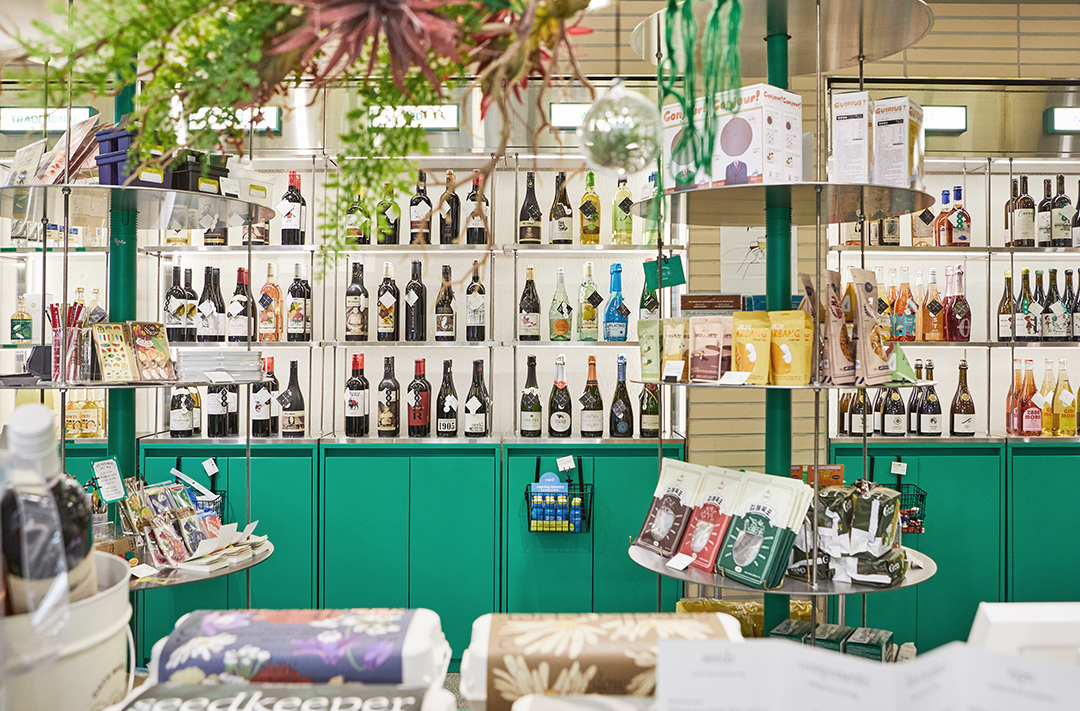 The market sells a wide range of liquors, including wines and beers. 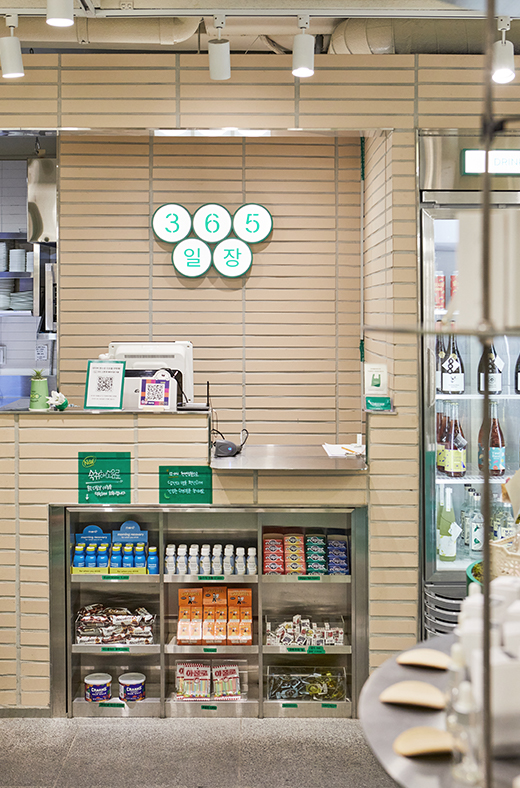 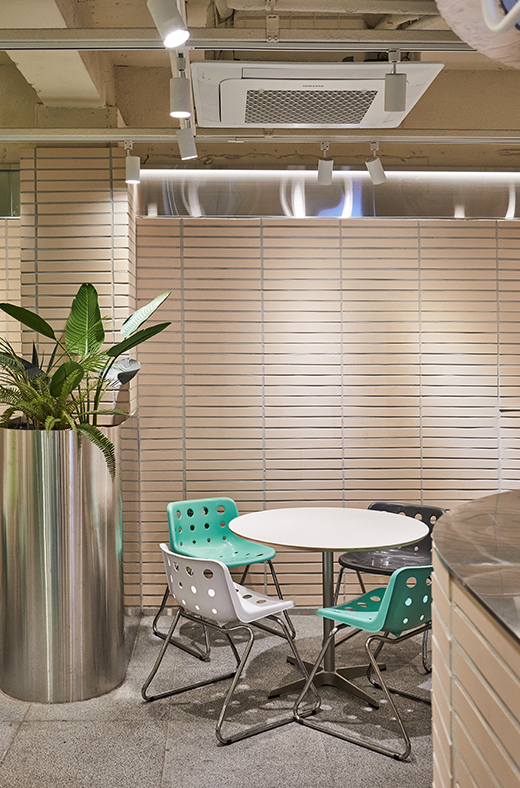 The place is set up like a sleek grocery market.

Revert Market Back to Its Truest Form
365 Iljang presents and sells diverse groceries, wine, traditional alcoholic beverages, stationery, t-shirts, and living items, largely manufactured by domestic local brands. It also ran 365 Kitchen, a small restaurant offering different versions of the foods sold at Gwangjang Market. The place, which was converted into a cafe, had an espresso machine installed at the entrance, allowing visitors to enjoy complimentary coffee whenever they want to take a breather. 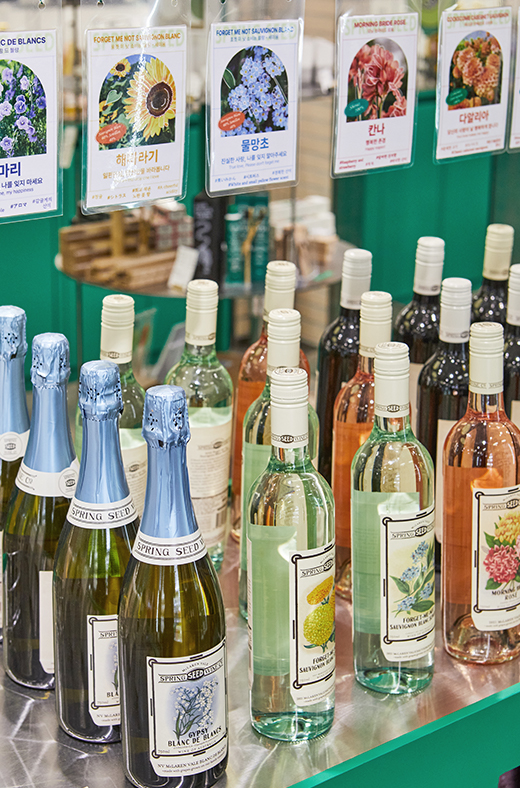 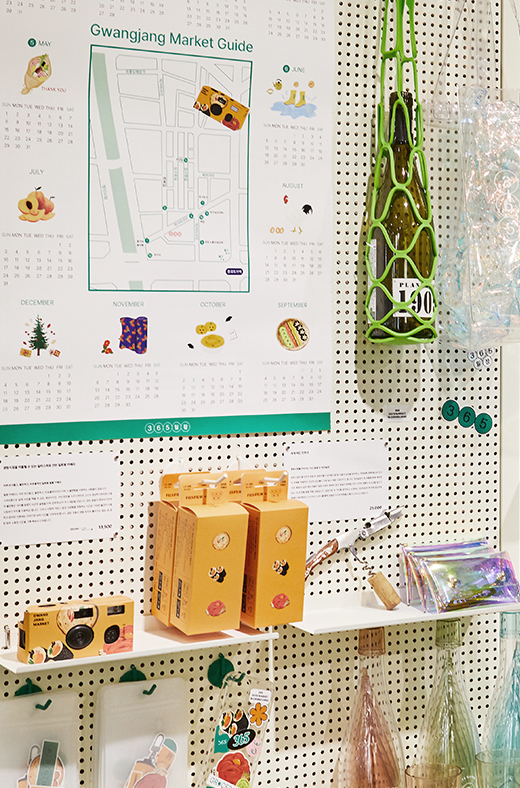 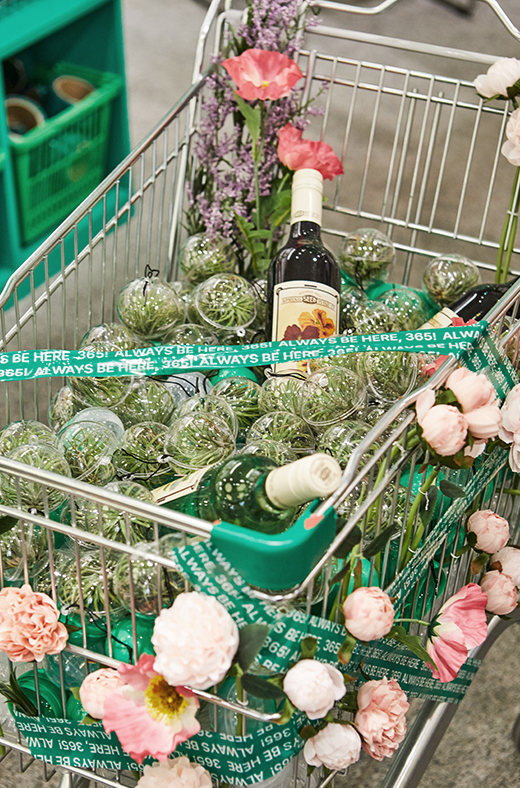 You will find many different types of decorations at 365 Iljang. 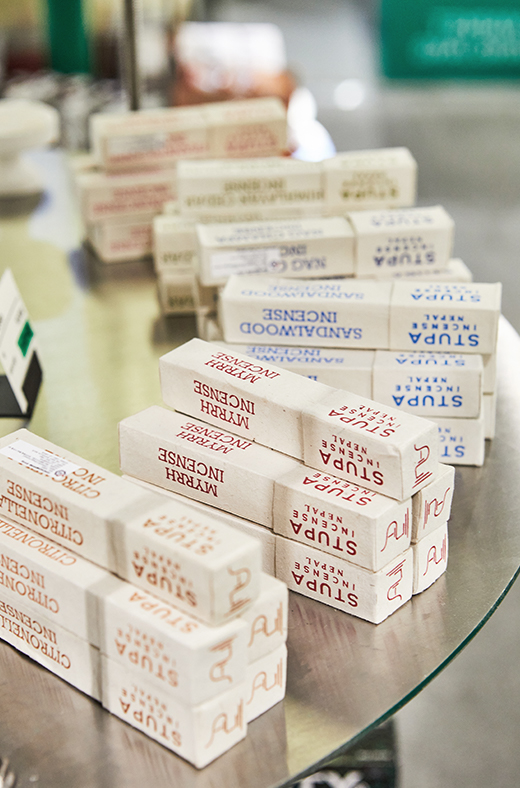 A variety of wine and beer are being sold at 365 Iljang. Particularly, ‘Gwangjang Shijang 1905’ created in collaboration with a domestic brewery is worth noticing. Each drink is introduced to the customer with a bit of its background along with the basic information, helping the customer understand and choose products easily. Various lifestyle goods, stationery, or t-shirts with a 365 Iljang logo print are popular among visitors, along with groceries.
There are ongoing efforts to find talented craft artists and domestic manufacturers based near Gwangjang Market. One of the goals of 365 Iljang is to provide assistance to small shops and craft studios in terms of branding, advertising, and sale. In fact, under the initiative, a wine opener was designed in collaboration with a najeon chilgi(lacquerware inlaid with mother-of-pearl) artist running a studio next to the market, and a disposable camera with an analog-style design symbolizing Gwangjang Market was also released. 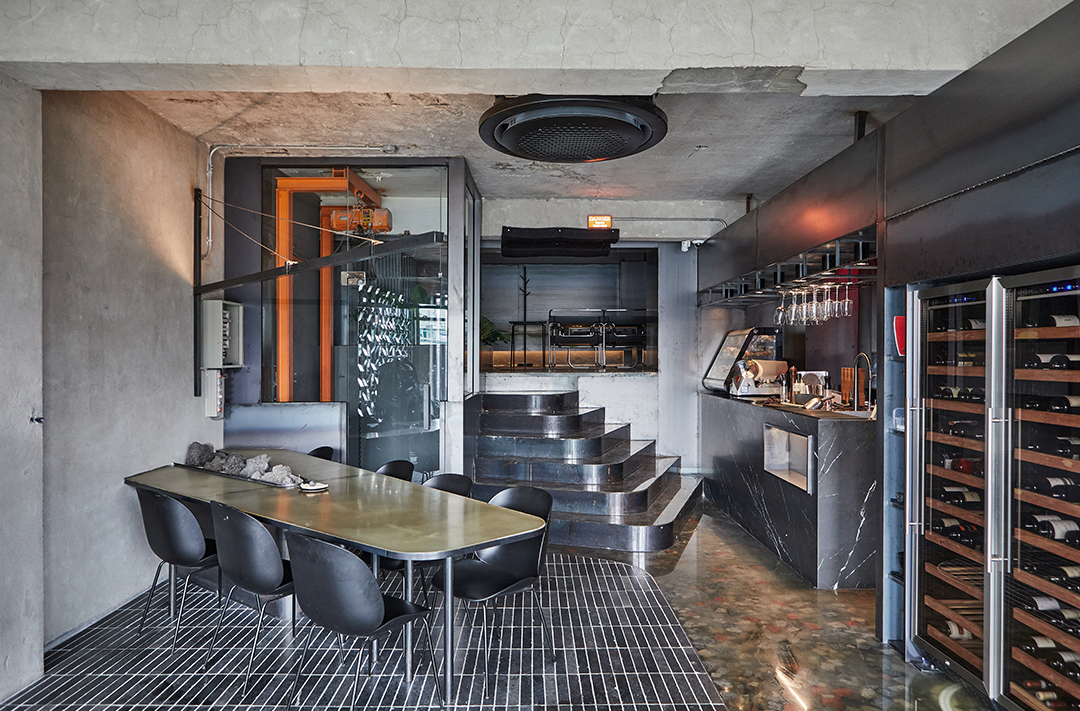 Hidden Hour, the hidden gem of a wine bar showing a new side of Gwangjang Market 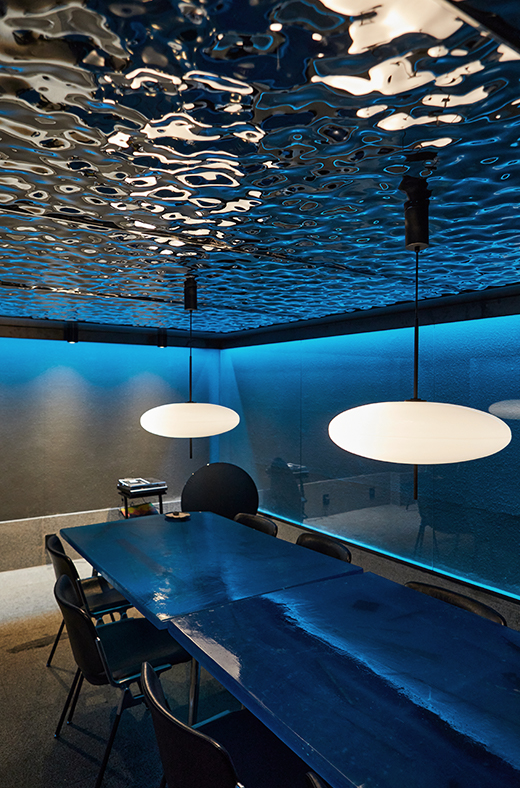 Ceiling inside the Hidden Room, making you feel like you’re underwater 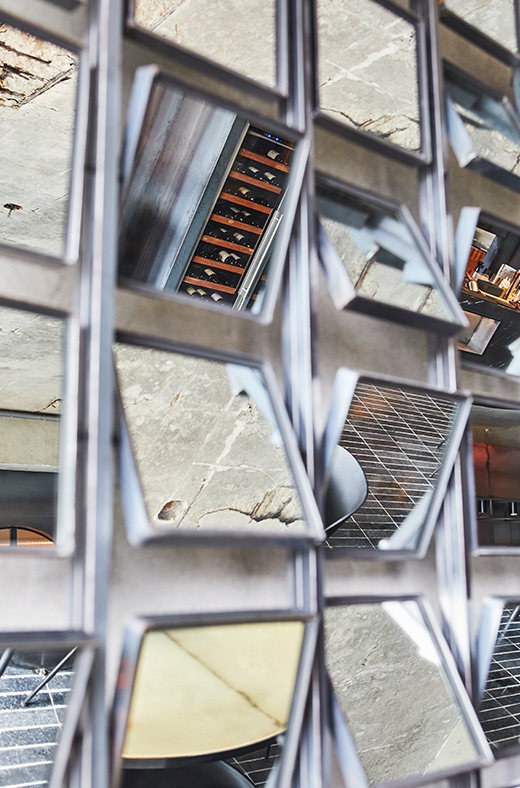 You will get different looks of the interior on mirrors tilted at multiple angles.

Market Observatory in Hidden Space
If you visit the market in the evening, make sure you check out ‘Hidden Hour’ located on the fourth floor. As the name suggests, the wine bar has secretive spaces at various corners. Cool and simple blackish colors and dozens of rectangular mirrors covering a wall add the element of surprise to the unique wine bar located in the marketplace. Korean-style homemade charcuterie and oven-baked pizza are on the menu if you wish to dine with wine.
Gwangjang market and the surrounding areas give different looks when viewed from the first-floor eye level and from above at the height of the fourth-floor rooftop. Some may wonder if all markets have these relatively high buildings with several stories. It turns out arch-shaped arcades installed in market alleys to enhance the flow of visitors tend to block the view of multi-story buildings that may stand in those areas. 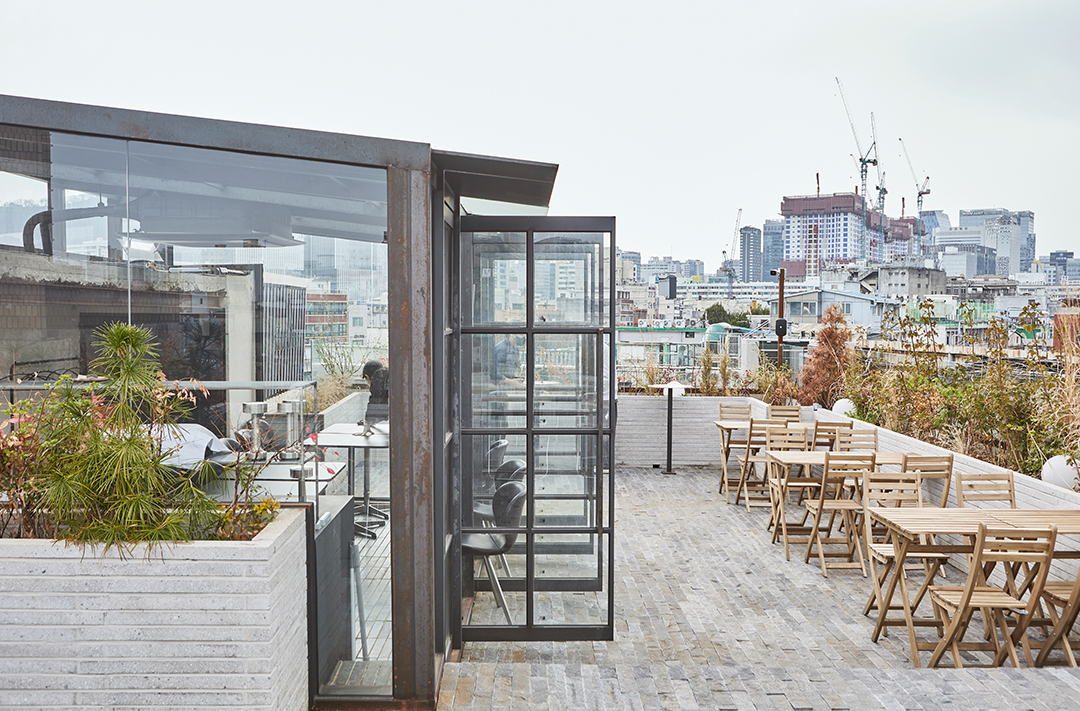 View of the Euljiro and the market from the rooftop

You can reach the rooftop of the building by going up the stairs. It is a one-of-a-kind viewing spot overlooking the entire market and Euljiro 4-ga area. Inside Hidden Hour is Hidden Room where you can enjoy wine and food privately.
Now that you have the coolest place to visit when you go to Gwangjang Market, all you have to do is to have a great time there.