Thrill Ride to Busan
If you want to experience the kind of thrill you have never felt before in Busan, you should head to Gijang County in the city. LOTTE World Adventure in Busan has rides that will give you unbelievable thrill and will fill your days with memories that you will want to cherish for the rest of your life.
Busan is such an incredible place for tourists. It has a great ocean, breathtaking night views and fish markets full of scents of the ocean and interesting people. The dynamic energy of Busan, a city blessed with so many attractions, has been drawing people from all over the place. And yet, the one thing missing from Busan and its surrounding regions has been a theme park where you can spend a fun-filled day. Busan finally has just the place where families and children can all enjoy themselves together. 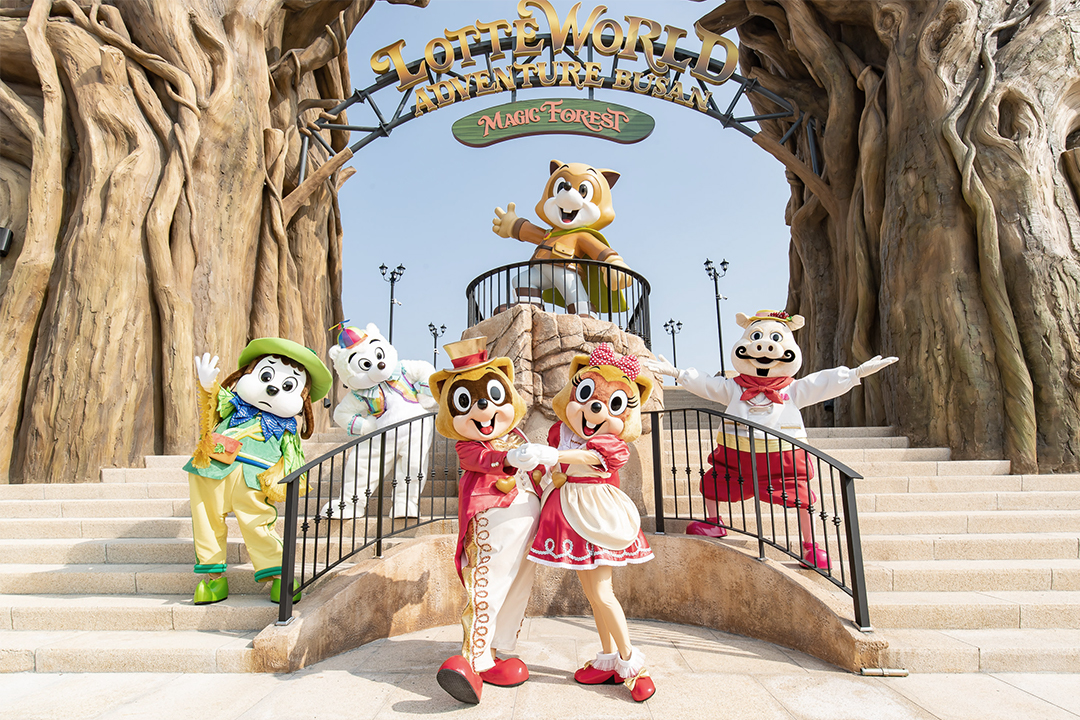 When in Gijang
LOTTE World Adventure BUSAN (LOTTE World BUSAN henceforth), situated in Gijang-gun (county), Busan, is the first theme park in Busan. It opened in March inside Osiria Tourist Complex, which was established in the county in 2015. Gijang has become the most popular destination for families in Busan. According to T-Map Mobility, Korea’s largest mobility platform, LOTTE World BUSAN was the second-most guided place in Busan on T-Map on May 5 Children’s Day. No. 1 on that list was LOTTE Premium Outlet, also located in Gijang. LOTTE World BUSAN, spread over some 158,000㎡ of land, is fairly close to Osiria Station on Donghae Line. An overpass bridge connecting the station directly to the park will be completed in June, making the place even more accessible. 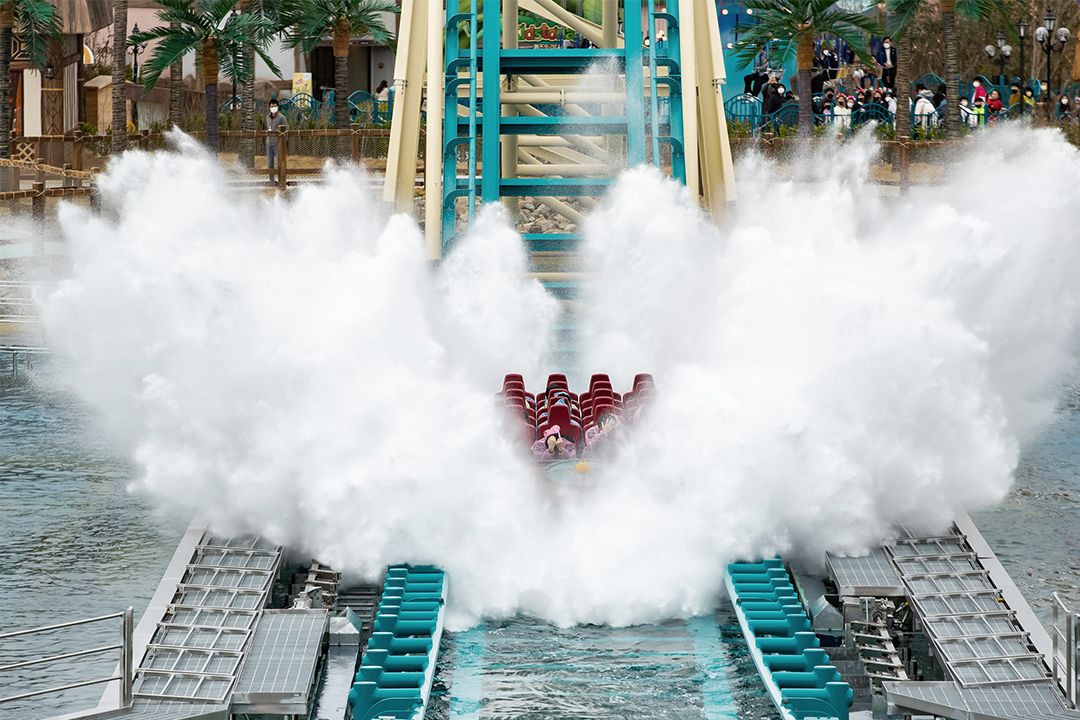 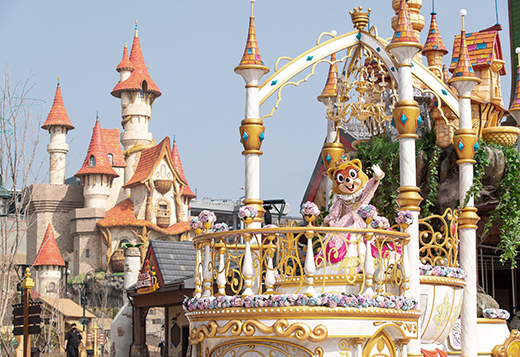 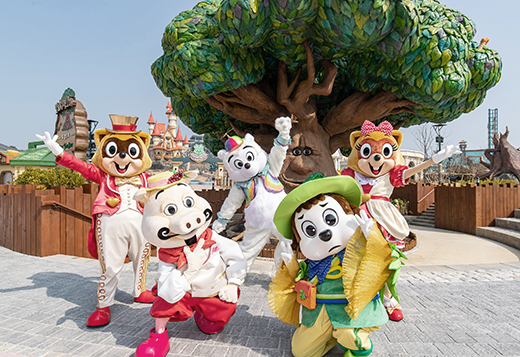 Amusement Park with Themed Zones
Built on the theme of “the Kingdom in a Fairytale,” LOTTE World BUSAN features six zones and 17 rides and attractions. These include two types of attractions that you won’t find at any other theme park in Korea. LOTTE World BUSAN also hosts concerts and has the country's very first roller coaster restaurant. There are plenty for everyone to enjoy. The Giant Digger and the Giant Splash, two of the most popular rides at LOTTE World BUSAN, are a must for all thrill seekers.
The six zones at LOTTE World BUSAN each feature structures and landscaping that best reflect their respective themes and stories. Parades and performances are also built around these themes.
The Tinker Falls Zone, the village of fairies, stands in the heart of the park. The giant Talking Tree, built with animatronics technology, tells visitors the stories of all six zones. The Lorry Castle, inside the Royal Garden Zone in the uppermost part of the park, is the symbol of LOTTE World BUSAN. It has been built as a floating castle on top of the water. From there, you can see the entire park stretched before your eyes. The ocean off the shores of Gijang also comes into view.
Other zones at LOTTE World BUSAN are: The Underland Zone, the mining village; the Joyful Meadows Zone, built as an animal farm; the Rainbow Springs Zone, with flowers in full bloom during all four seasons; and the Wonder Woods Zone, inspired by a port town. 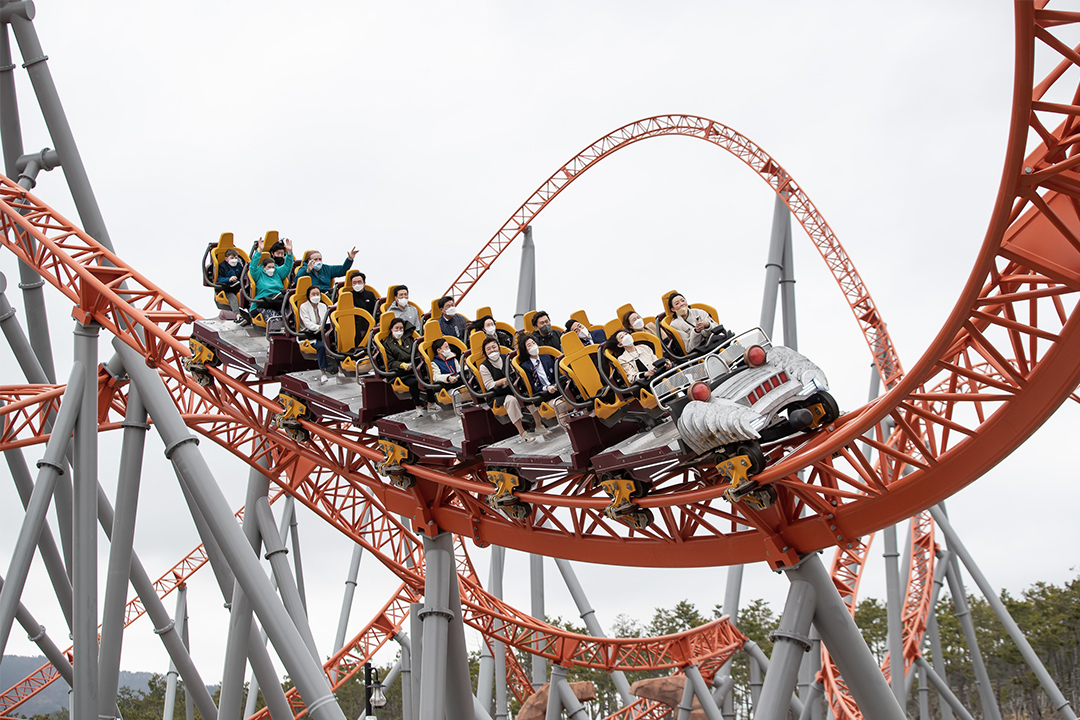 Get Your Heart Pumping!
If you are in search of thrill, then you absolutely have to try the three Giant series attractions. The Giant Digger, the first of its kind in Korea, is a motor-driven, launch-type roller coaster that will shoot itself out of cannon. It covers 1km track in the blink of an eye, touching 105km/h in the process. And the track features three 360-degree rolls. Not only is this roller coaster blazing fast, it will spin you into oblivion, to the point of sheer fright. The Giant Splash inside the Wonder Woods Zone is the first water coaster at a Korean theme park. It drops 44.6 meters at 100km/h toward a pool holding 2,000 tons of water. Each ride produces massive splash. That cool shower is the reward for riders who overcome the fear of the sheer height and speed of the ride. If you’d rather stay dry, you can purchase rain gear at a vending machine. 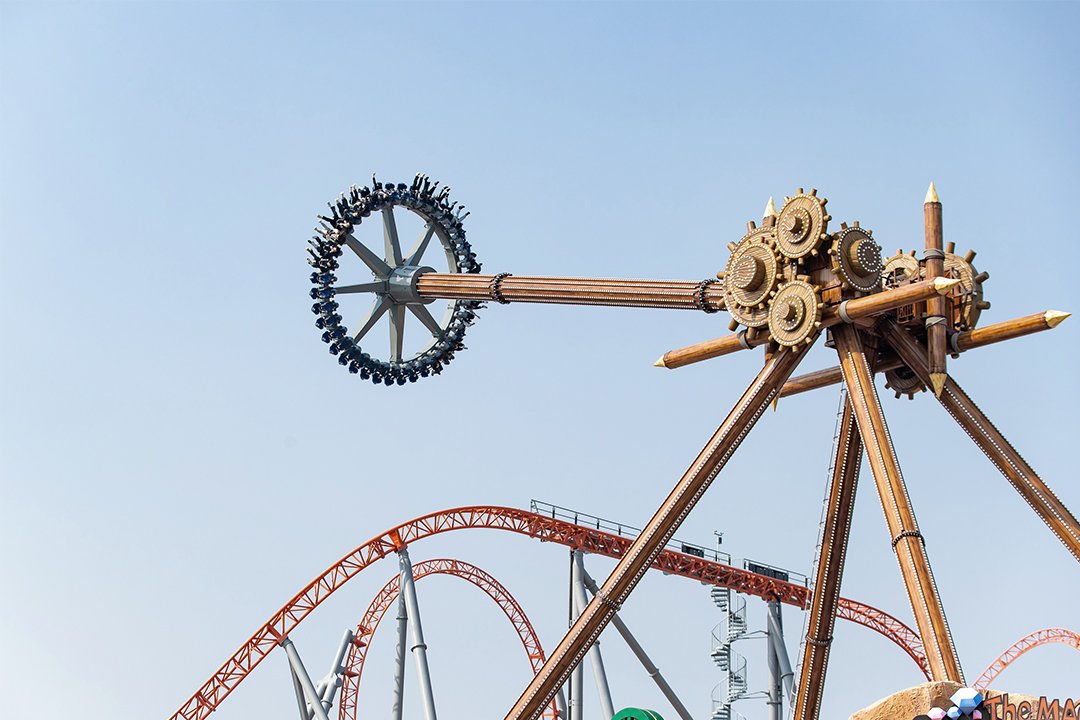 The Giant Swing completes the trifecta. This attraction is like a brother to Gyro Swing at LOTTE World SEOUL. The Giant Swing's central axis is about 20 percent longer than that of Gyro Swing and it swings much wider. It has the maximum speed of 110km/h and can take you up to 44.8 meters at the top of its swing. The momentary loss of gravity at the top will be particularly terrfiying. Once you get past that dread and manage to open your eyes, you will be treated to the view of the beautiful ocean off Gijang's coast. If you somehow tòok a camera up that high, you would want to take pictures of the ocean. In that very moment, your sense of horror and appreciation for natural beauty will converge. The irony won’t be lost on anyone. The Giant Swing and the Giant Digger are so close to each other that, when you are riding one, you will feel like it will crash into the other. That proximity will only add to the thrill.
There are enough rides for young families to enjoy with thier children and toddlers. The Joyful Meadow Zone has six children-only attractions, including the roller coaster named Cookie Train, Baby Pig Bumper Cars and Fly Kkokko. 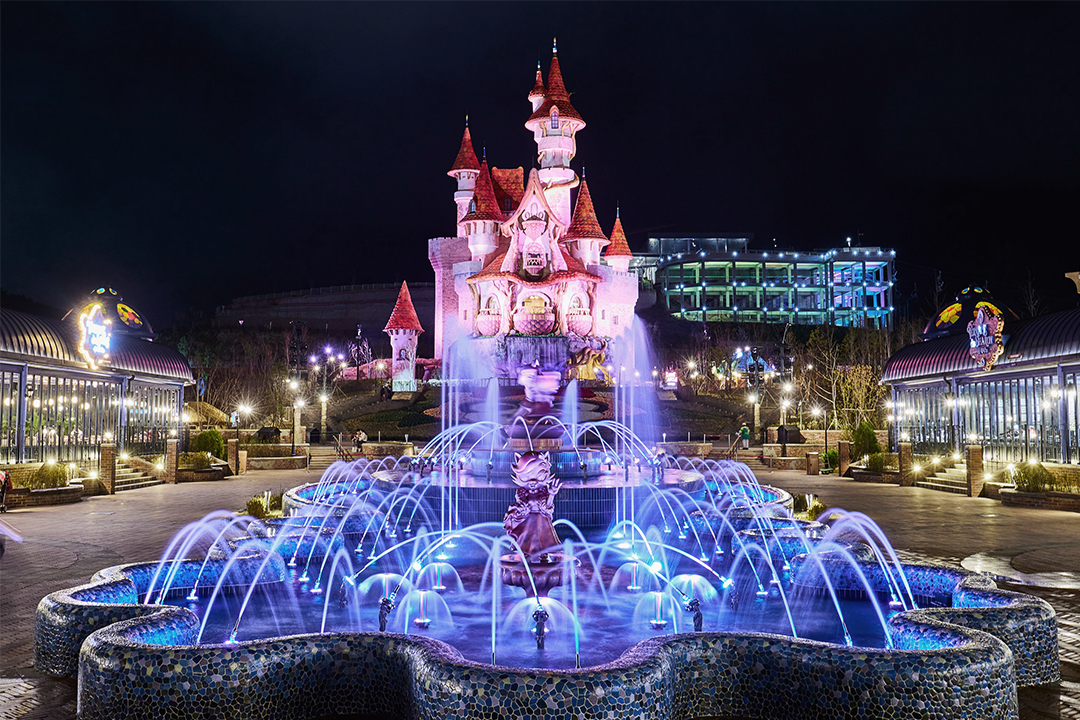 Parade, Highlight at Theme Parks
At amusement parks, eating should be fun, too. LOTTE World BUSAN has Kore’s first « food drop » restaurant, with dishes being delivered on a roller coaster rail inside the 170-seat dining hall. It is a huge hit for children.
Parades are always the highlight of visits to theme parks. ‘Lotty’s Magic Forest Parade’ will feature seven vehicles and dancers and other characters in lavish costumes. There are two 30-minute parades each day, held over a 520m-long course. The parade has its own theme song, too, composed by music director Jang So-young and performed by musical star Park Hye-na, who also sang the Korean version of the Disney themed ‘Let It Go.’
Busan is no longer just about sightseeing. You can now do some fun things in the city. 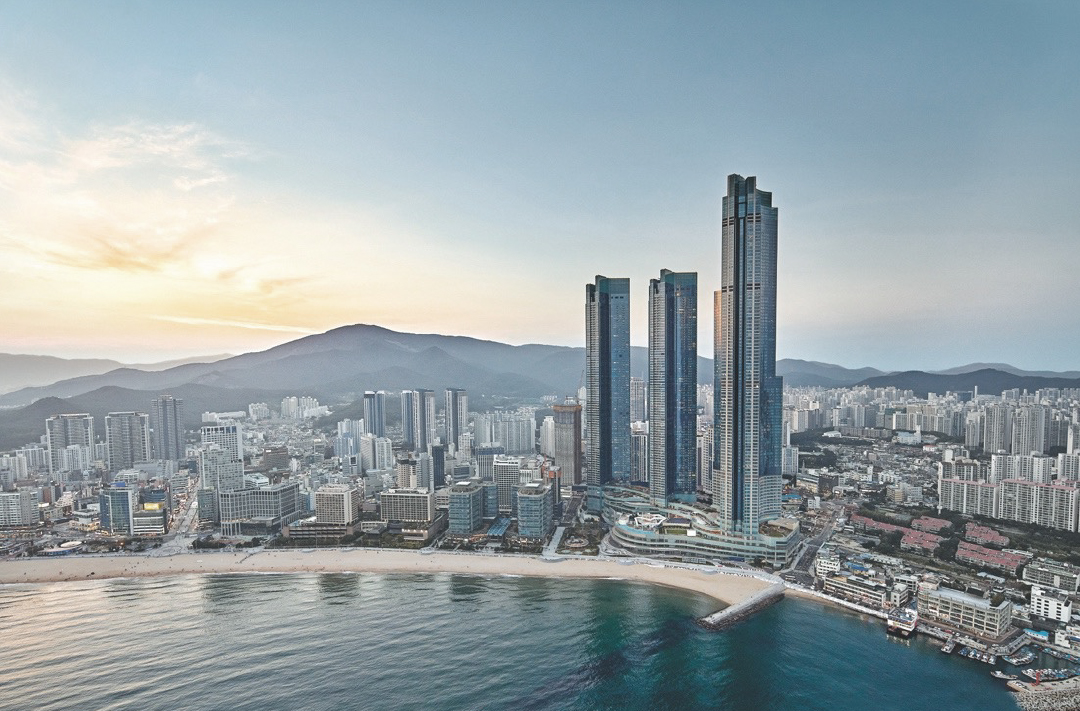 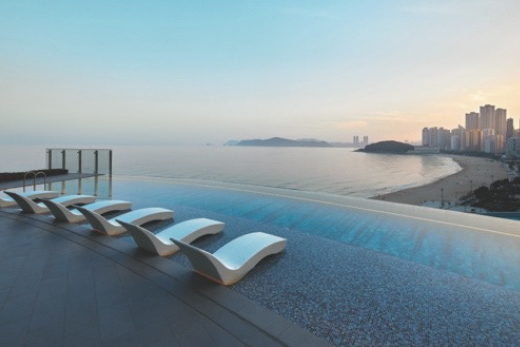 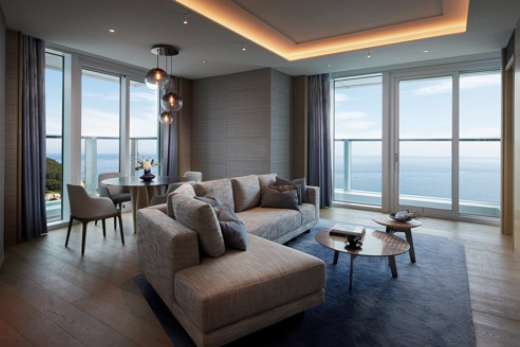