[LOCAL TOUR] Day and Night of Mullae
Hiss, clang, clang. The sound of cutting and grinding metal is heard repeatedly across streets. In the day, the same streets are filled with the aroma of coffee, while in the evening, the combination of scents from cooked meat and wine is dominating. It is what you can see in Mullae-dong, western Seoul.
The Mullae 3-ga street featuring compact metalwork factories in Yeongdeungpo-gu, Seoul, is an eccentric neighborhood. Unique murals and sculptures can be found all over the area, as drawings on the doors of the foundries and as random street installations here and there. After the sunset or on the weekend, the area is crammed with people visiting from who knows where. On a regular weekday, however, just the metalwork noise fills the empty street. 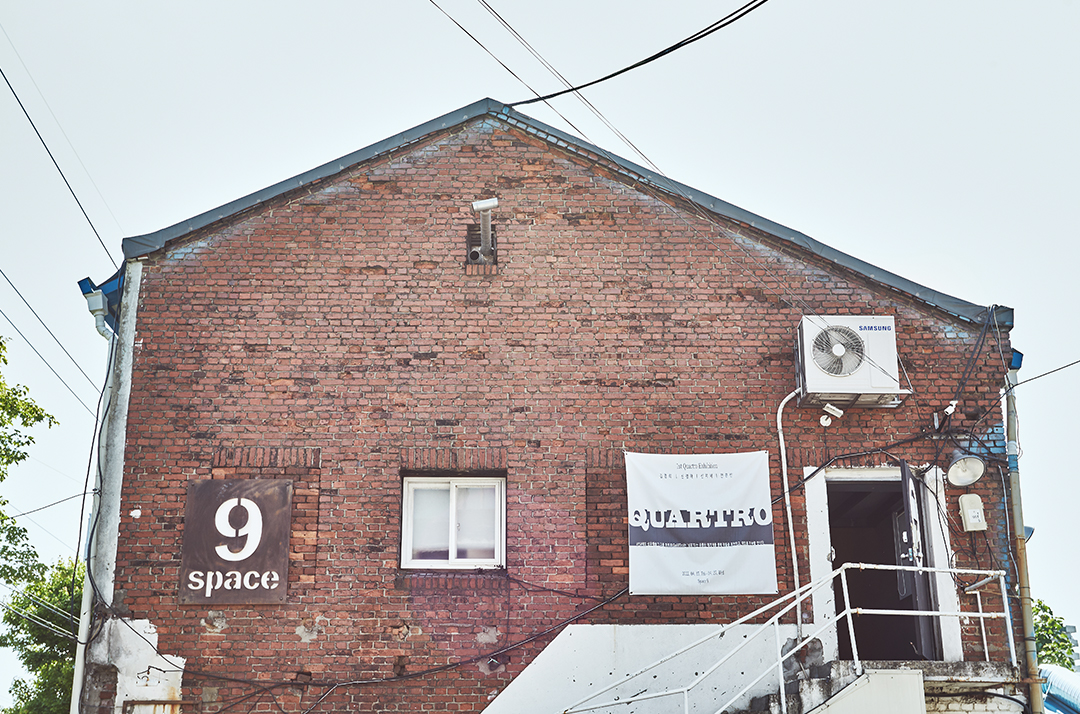 Mullae Art Village in Industrial Town
The iron foundry streets of Mullae 2ga and 3ga gained a new name of Mullae Art Village in the 2000s when artists relocated to the vicinity of Mullae-dong en masse due to gentrification. Rising rental costs at Hongdae and Daehangno areas pushed young artists out of their original workspace. One of the alternatives was Mullae-dong. After some manufacturers vacated their factories for various reasons including the urban redevelopment plans, those artists set up their studios in the deserted factory space. It naturally led to the birth of an artist village. Although it wasn’t obvious from the outside, with most of the studios sitting higher than the second floor of the buildings, over 200 artists reportedly settled in the Mullae 2ga and 3ga area in that period. 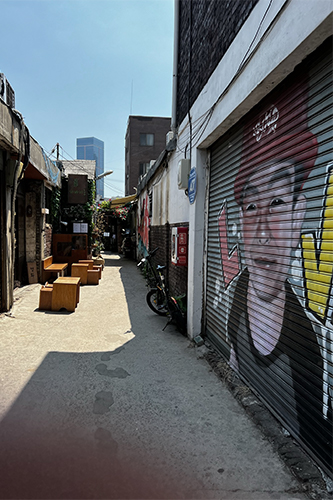 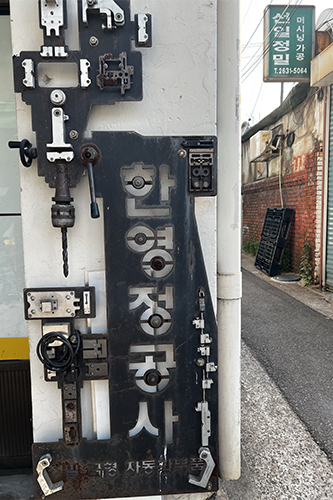 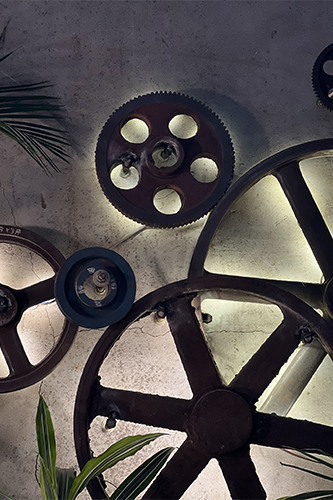 You can see hints of collaboration between ironworkers and artists in different parts of the village.

Traces of artists can be detected across the streets if you look for them. To make a living, the artists drew murals and made new store signs for factories and diners, or even took custom art orders. Some restaurants and bars opened business utilizing building materials given by nearby metal shops. In particular, the rooftops of the buildings were the first ones to be turned into a pub, bar, or restaurant. Now in the evening or on the weekend, Mullae Art Village transforms into a trendy restaurant quarter popular among young generations.
The night and day of Mullae-dong are completely different, yet they manage to maintain a balance with each other like well-oiled cogwheels. 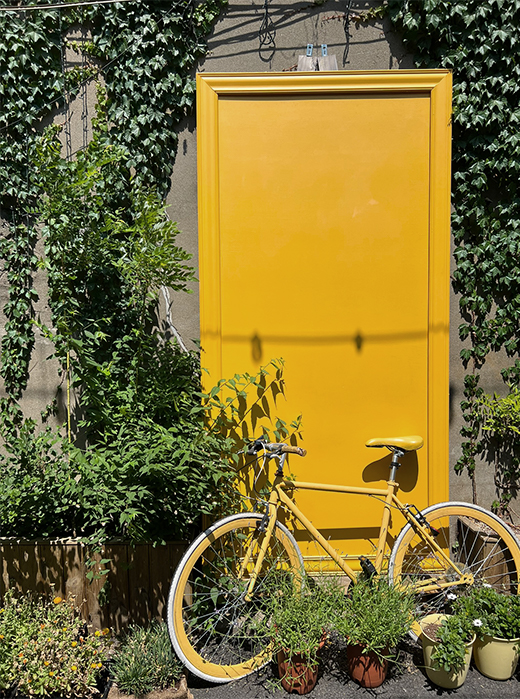 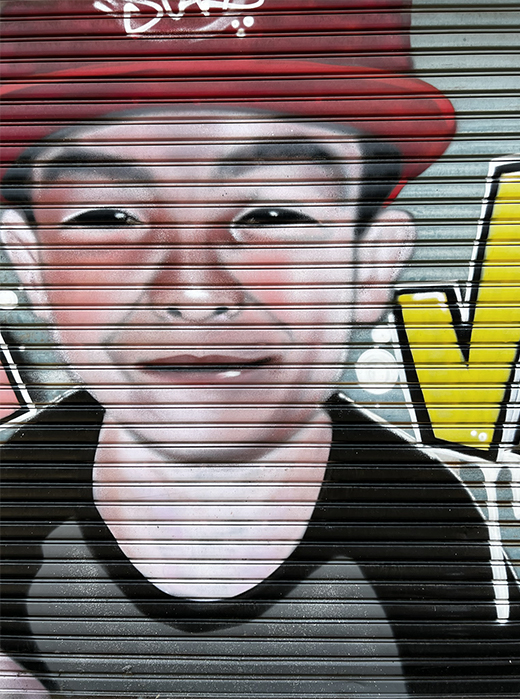 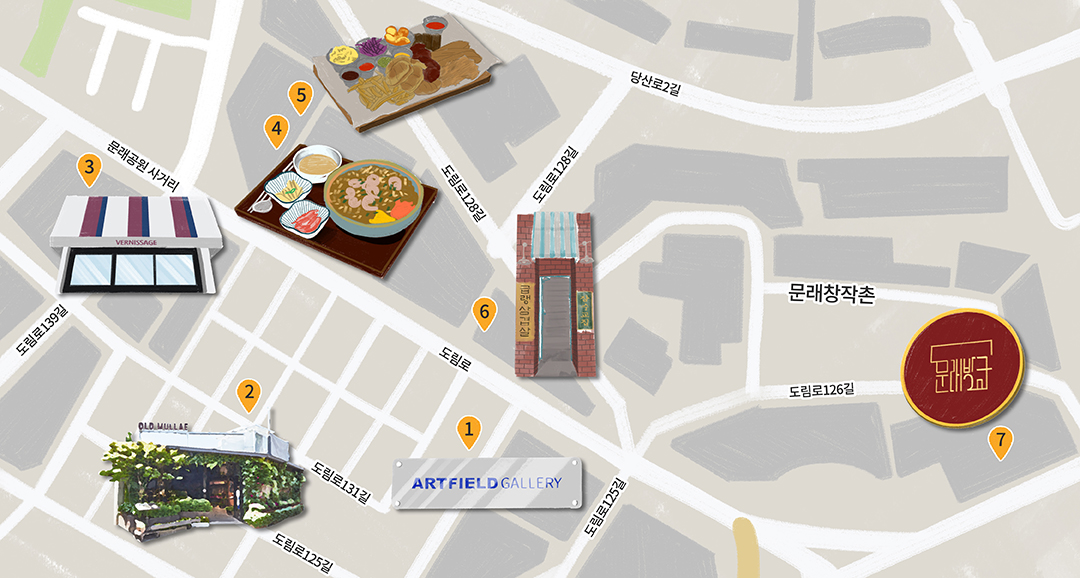 ❶ Artfield Gallery
If you were caught off guard by the large number of art galleries based in Mullae-dong, make sure to visit Artfield Gallery among others. It belongs to Flyspace Entertainment that has been a member of Mullae Art Village from the beginning. Gallerymullae Trail, one of the famous alleys of Mullae Art Village, presents shops and galleries owned by Flyspace, including Artfield Gallery, Gallery Mullae serving as a restaurant and culture space, and Mullae Culture Salon, a pub and performance space. Mullae Art Fair is also held there.
Artfield Gallery is the most active gallery in Mullae-dong in terms of art exhibitions. Its two halls are employed to feature contrasting exhibitions. The first hall mostly deals with invitation events, whereas the second hall offers a wider spectrum of exhibits by introducing new artists. The gallery also functions as a liaison between artists and charity events through their benefit exhibits and special exhibits. Its focus on art lives up to the name of Mullae Art Village.
Address 2-1, Dorim-ro 129-gil, Yeongdeungpo-gu, Seoul
Instagram @artfield_gallery 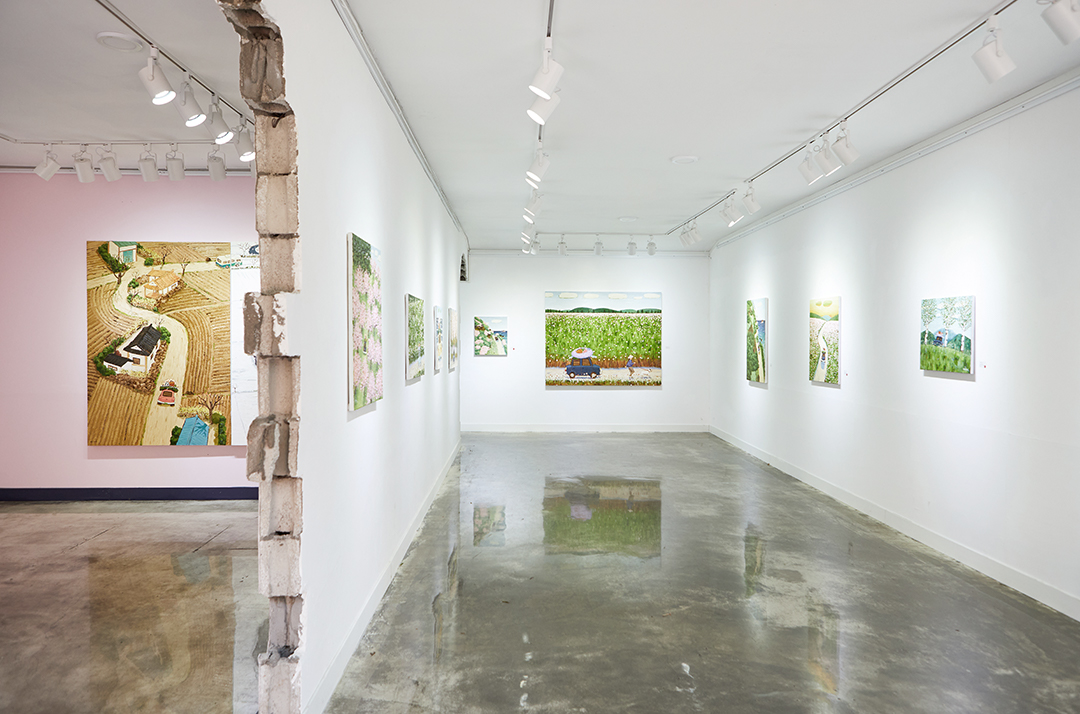 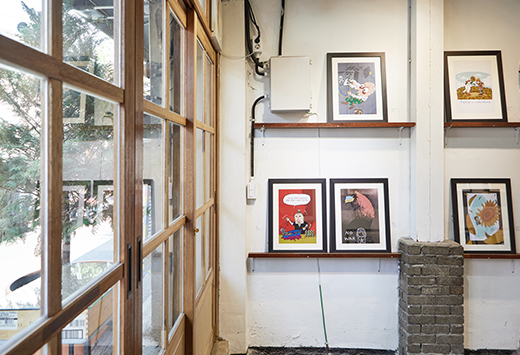 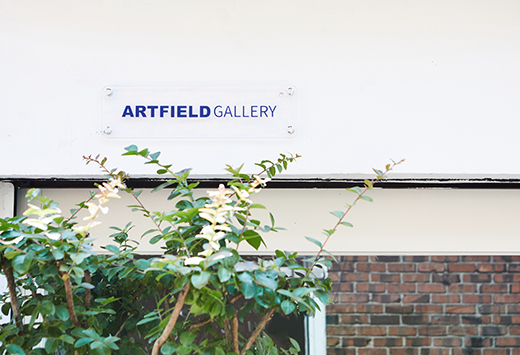 ❷ Old Mullae
There still remain wooden houses built during the Japanese colonial era in Mullae-dong. Such buildings were designed to have high ceilings, creating an open, airy atmosphere inside, which led to their popularity as gallery spaces. Old Mullae, however, is using its space for a cafe and pub. Old Mullae has the highest seniority in Mullae Art Village, and it is a well-known trendy spot, having been shown on various TV dramas. It’s the first thing that pops up if you google Mullae-dong on social media.
Serving as a cafe in the day and a craft beer pub in the evening, Old Mullae was a project and space launched by the owner whose background was in wooden architecture. He wanted to assess the possibility of regenerative architecture in Mullae-dong. So the intention was not to be commercially successful but to make an effort to upcycle the historic wooden structure, a rarity in Seoul, in the best way possible.
Various plants scattered across the space, the old conveyor belt and welder’s mask, and the wall structure resembling a clockwork clearly show the effort to incorporate local characteristics in the interior design. The sound of machinery coming from the foundry behind the cafe grips the space like background music in a vintage film. That just about sums up Old Mullae.
Address 433-6, Dorim-ro, Yeongdeungpo-gu, Seoul 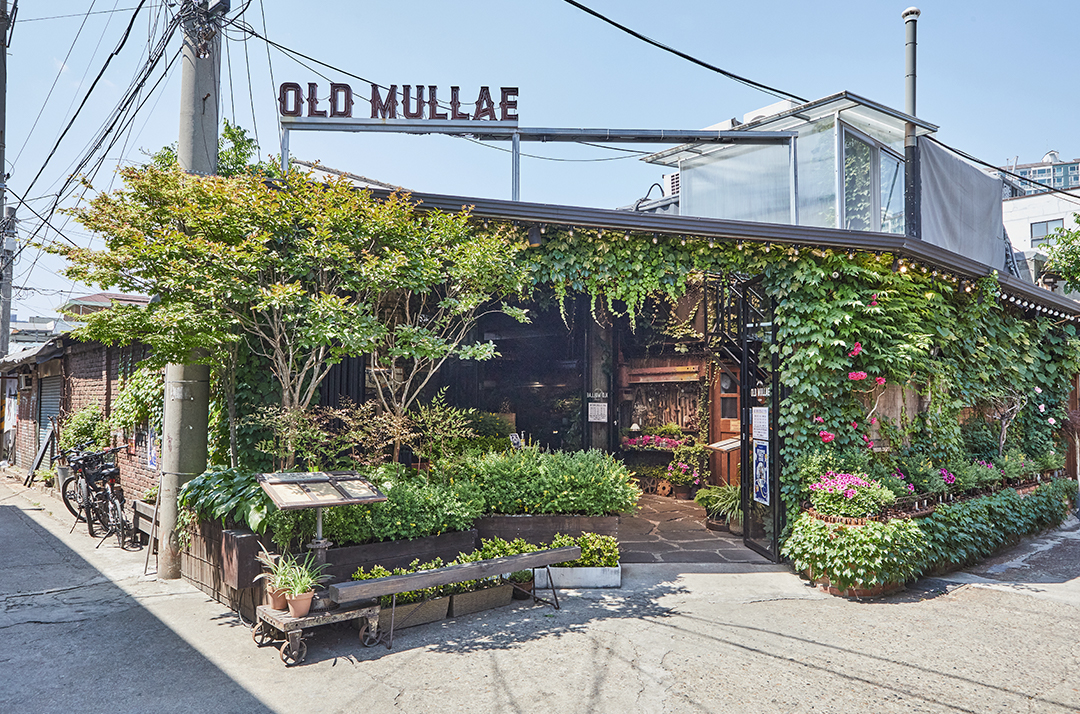 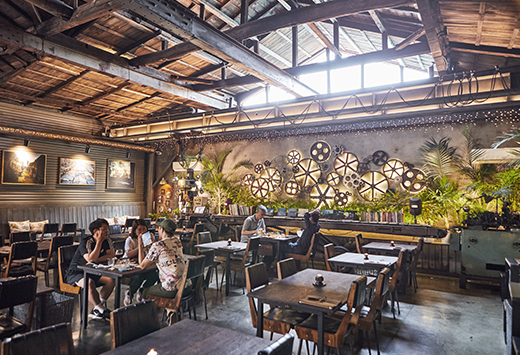 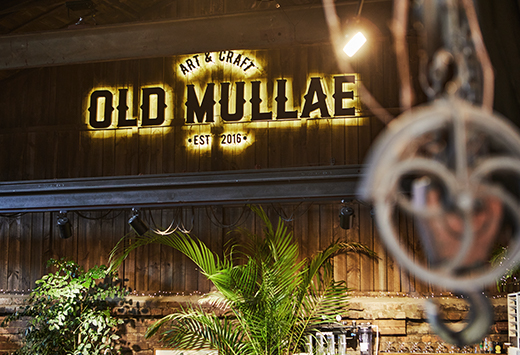 Old Mullae is one of the oldest pubs in Mullae-dong.

❸ Vernissage
Situated near the entrance to Mullae Art Village, Vernissage is a vintage poster shop. Art posters and photographs have recently been popular items in interior decorating. Vernissage sells authentic art posters, mostly purchased by a proxy at an auction in Paris, France, and sent to Korea.
A great portion of the posters were printed in the 1950s by Fernand Mourlot, the famous French printmaker. What this means is that they have originalities and exceptional qualities as well. The current printing method cannot duplicate the vintage texture and tone of these works. You can find rare posters promoting exhibitions or artworks by Chagal, Gogh, and Picasso. The price is usually around 300,000 and 400,000 won. The original posters featuring Gogh or Picasso go for a little more.
Chagal and Guy Bardone posters have been popular among the buyers who have had a firsthand experience of how the artwork display changes the atmosphere. Old yet vivid and lively posters resemble the state of Mullae Art Village. The shop opens only on the weekend. You have to inquire separately regarding visits on an irregular day if you wish.
Address 445 Dorim-ro, Yeongdeungpo-gu, Seoul
Instagram @vernissage.kr 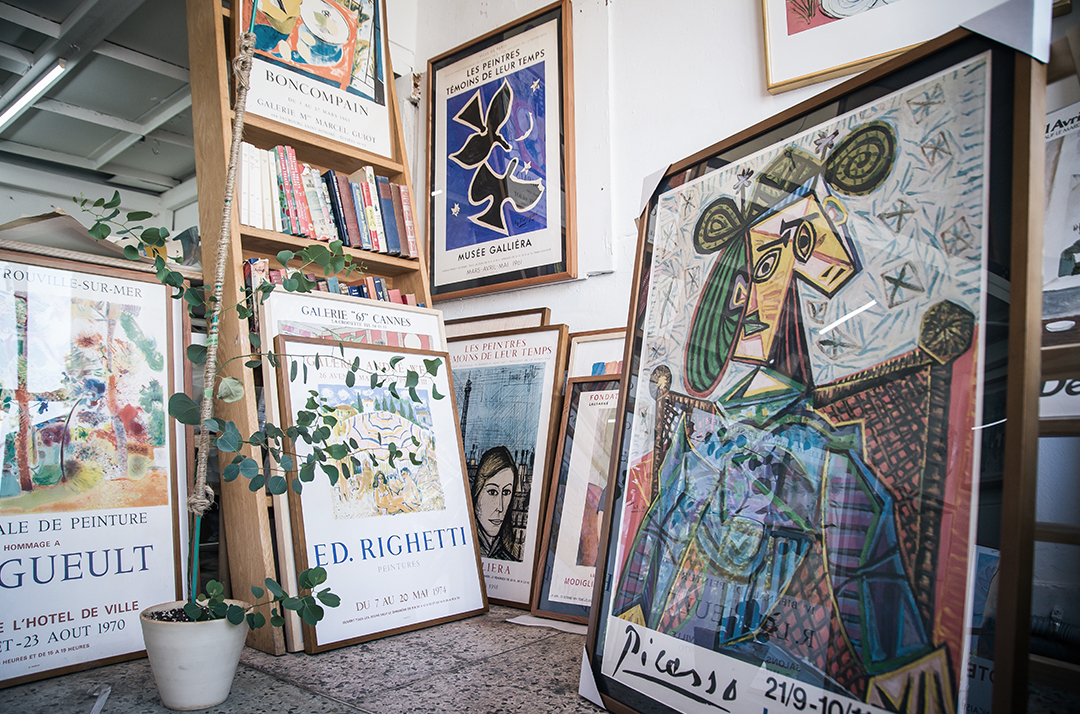 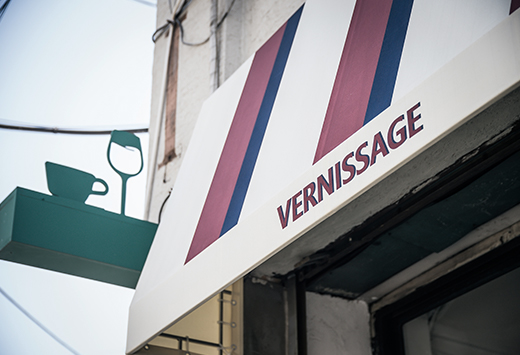 Check out all types of vintage posters, coming in varying sizes, at Vernissage.

❹ Cheolpanhui
Mullae Art Village has two kinds of trendy eateries. They are either restaurants with a long history and tradition that have been frequented by metalworkers or merchants in the area, or newer businesses attracting Mullae-dong visitors or tourists. Cheolpanhui belongs to the latter group. It is popular among those who visit Mullae Art Village in the evening or on the weekend. At the same time, long-time residents of Mullae-dong also find the diner likable.
You can enjoy little decor details that accentuate the beauty of a hanok house, along with food and drinks. For lunch, they serve fried rice and noodles cooked with ingredients such as usamgyeop(beef loin) or seafood. For dinner, they offer meals and side dishes for drinks together, including okonomiyaki, grilled or fried dishes, and iron grill steak. The restaurant has received favorable reviews and word of mouth since its opening, and you can expect long waiting lines during a weekday lunchtime and on the weekend.
Address 440-11 Dorim-ro, Yeongdeungpo-gu, Seoul 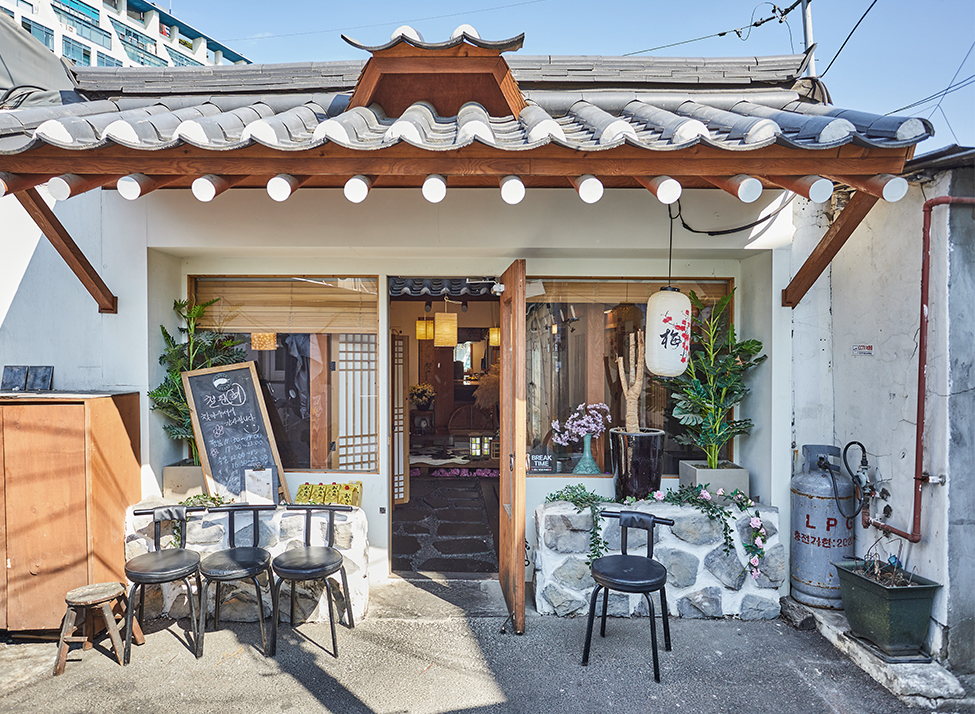 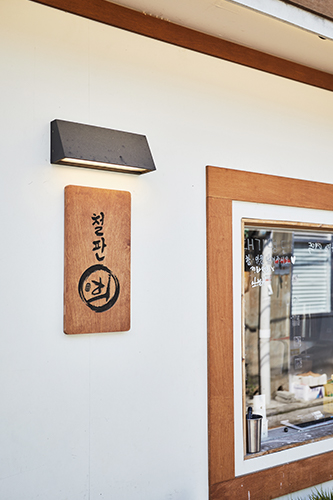 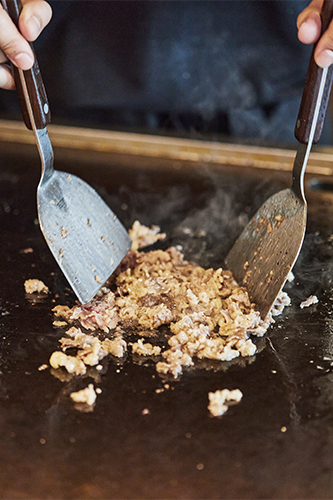 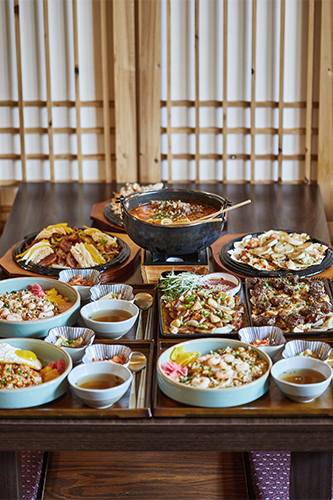 ❺ Grillerz
One of the must-have restaurants in the trendiest neighborhoods such as Yeonnam-dong, Seongsu-dong, and Garosu-gil is the one with a barbeque platter on its menu. Grillerz is a barbecue platter specialty restaurant covering the areas surrounding Mullae Art Village. Its platter image shows a serving plate filled to the brim with smoked meat including pulled pork, pork rib, and brisket, along with thick sauce, bread, french fries, and some salad, helping you finally understand why there is a term ‘matggangpae’ in Korea, often used in a situation when something is extremely delicious.
Because of the long hours, it takes to barbecue, the platter requires more time and labor than other dishes, making it difficult for restauranteurs to include it in their menu. Grillerz uses natural oak chips in the smoking process, taking enough time at a low temperature to achieve the challenging task of perfecting the ‘crisp on the outside and moist on the inside’ texture of meat. Having graduated from the same school in the states, the owners invested a great deal of time to figure out how to recreate traditional Texas flavors. The restaurant’s interior design also reflects such efforts with a no-frill, simplistic setup.
Extra toppings that go on the platter, such as coleslaw, potato salad, beef chili, fried corn, and carrots & celery can be switched out at the time of your order. The fact that many TV celebrities have already paid a visit to Grillerz puts any questions regarding the quality of food to rest.
Address 440-13 Dorim-ro, Yeongdeungpo-gu, Seoul 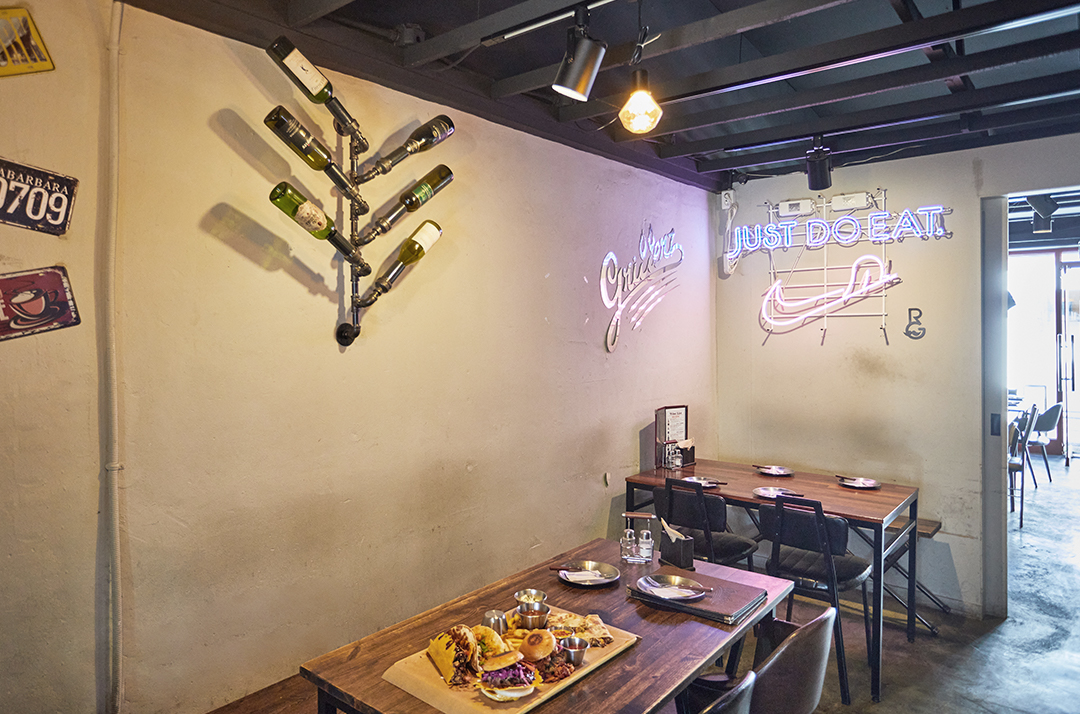 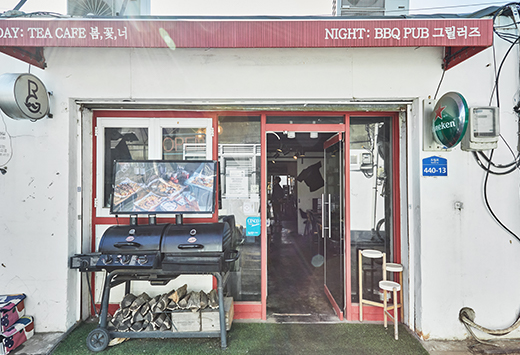 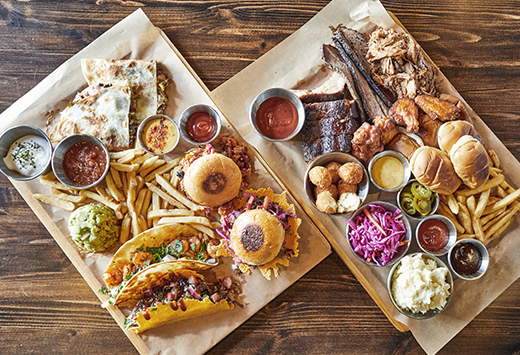 The plate at Grillerz, serving authentic Texan BBQ in all its glory

❻ Jamsugyo-Jip Mullae
If you have not been to Mullae-dong, it is likely that you will pass Jamsugyo-jip Mullae without noticing it. It is a streetside restaurant but with no store sign. Nevertheless, there always is a long waiting line, even during a weekday lunch.
Having originated in Bogwang-dong, Jamsugyo-jip runs direct management stores across Seoul such as in Songpa, Apgujeong, and Mullae. Their signature menu is frozen samgyeopsal using premium Korean pork belly. All Jamsugyo-jip restaurants have the identical retro-style interior decor and layout. The Mullae branch has a rooftop only available to groups of four or more people on the weekend. As of now, the rooftop spots are fully booked two months in advance.
Bite-sized meat, pickled scallions, and kimchi are grilled on a piece of aluminum foil, to which you are strongly recommended to add a minari and chili pepper set. Among the side dishes that are provided, rolled omelet is much tastier if you grill it one more time before eating. Another way to enjoy the food there is by dipping grilled meat or vegetables in the raw egg sauce mixed with soy sauce and scallions. After you finish eating meat, ask for the addition of pan-fried rice along with squid intestine soup or soft tofu stew.
Overlooking the Mullae-dong neighborhood from the rooftop will be a memorable weekend experience.
Address 2F, 428-1 Dorim-ro, Yeongdeungpo-gu, Seoul 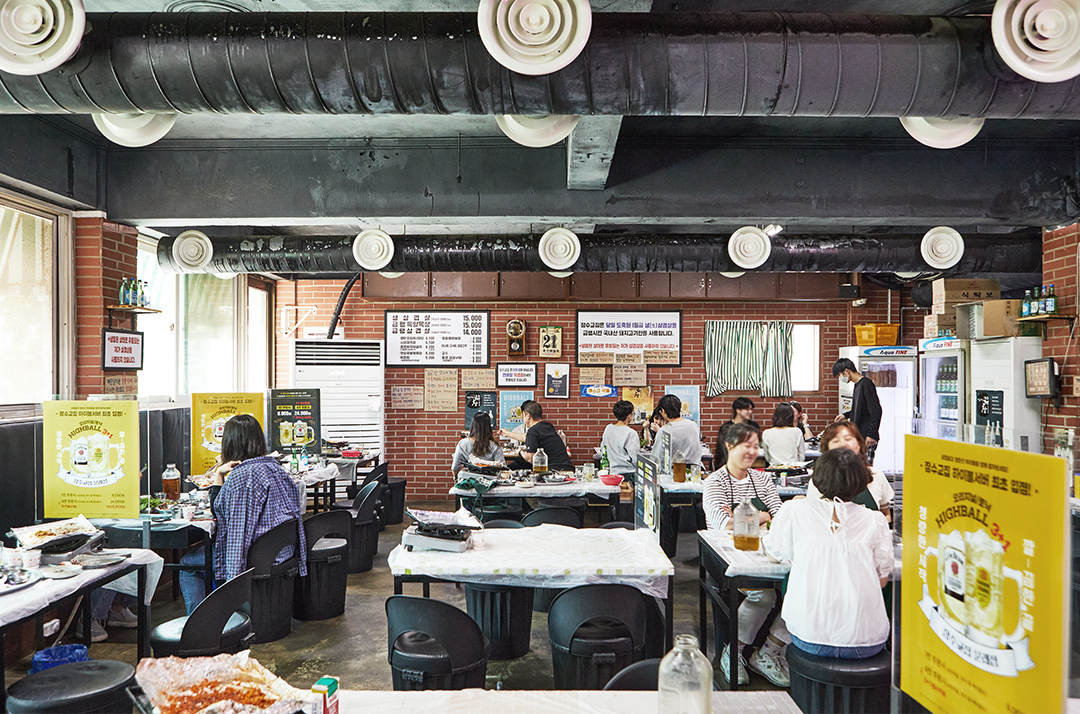 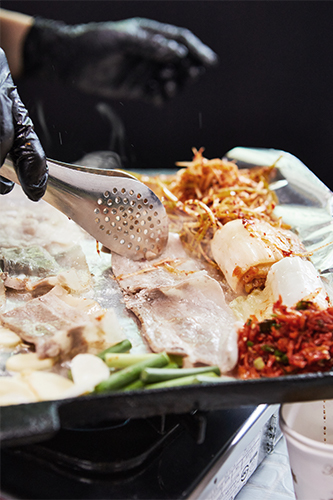 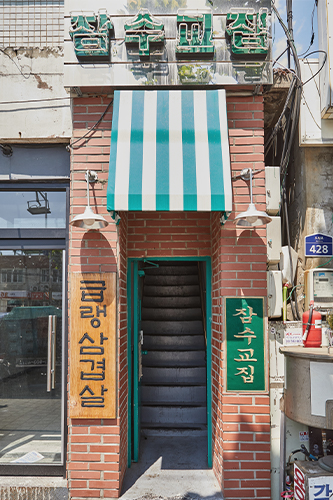 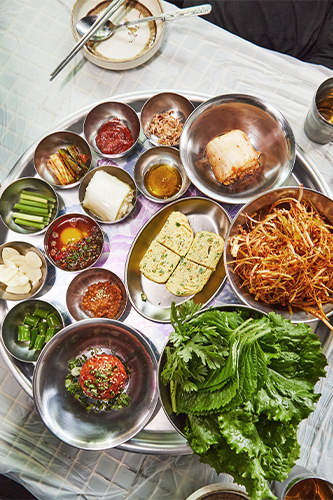 ❼ Mullaebanggu
Is it a stationery store or a cafe? Mullaebanggu is actually a cafe and select shop located near a crosswalk between Mullaedong 2ga and 3ga streets. Fittingly for its name which sounds like munbanggu, a small stationery store commonly found near schools in Korea, Mullaebanggu sells several stationery items such as pencils, notebooks, schedulers, and incense sticks that are ordinary or uncommon, along with espresso. The owner of the store also works as a local artist creating bags or small craft items using leather and fabric while running handicraft classes.
Customers who order espresso are to leave markings on a piece of paper that says ‘statement of account,’ choosing their preferred beverage options such as the type of coffee, cream, milk, and caramel. By lunch, demitasses stacked up by espresso drinkers are scattered around the countertop.
Carelessly layered bricks and salvaged metal pieces decorating the space. A glimpse into Mullaebanggu tells you what Mullae-dong stands for in terms of everyday space and art coexisting.
The merging point between what is vintage, industrial, and art is Mullae-dong.
Address 763 Gyeongin-ro, Yeongdeungpo-gu, Seoul
Instagram @mullaebanggu 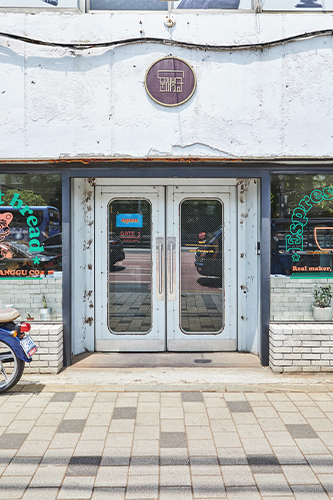 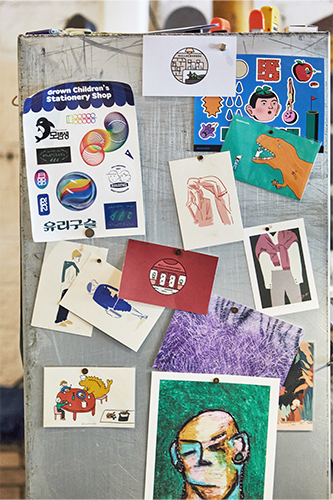 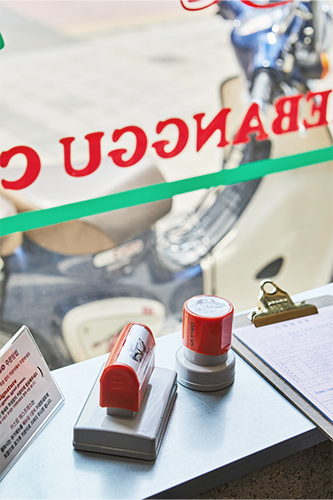 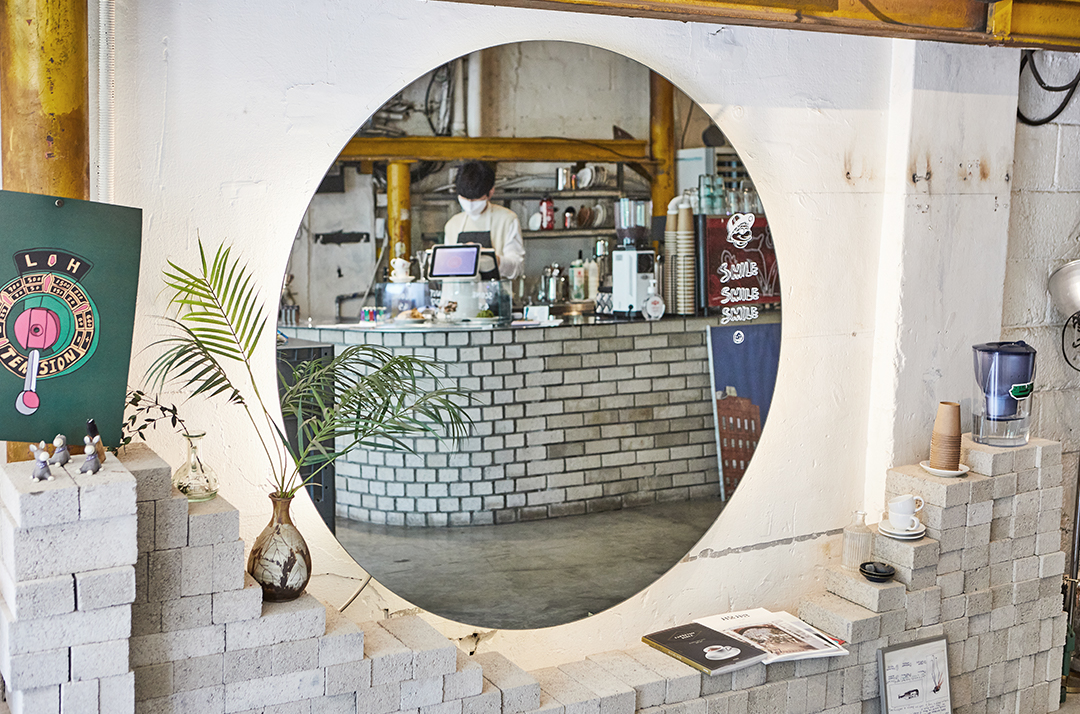 The witty interior at the espresso bar Mullaebanggu