To Regain Inner Peace, Town of Forks
There is a special place that shatters the preconceived idea of what constitutes a beautiful and memorable travel destination. The City of Forks and Rialto Beach in the Pacific Northwest, United States, have their one-of-a-kind charms to steal the hearts of travelers.
The act of planning a trip says a lot about that person. Some prefer following a professional travel guide's itinerary, packing a day with things to see and do from morning till night, while others want to relax and enjoy peaceful days at a remote destination, away from crowded tourist spots. Forks is a perfect city for the latter group. 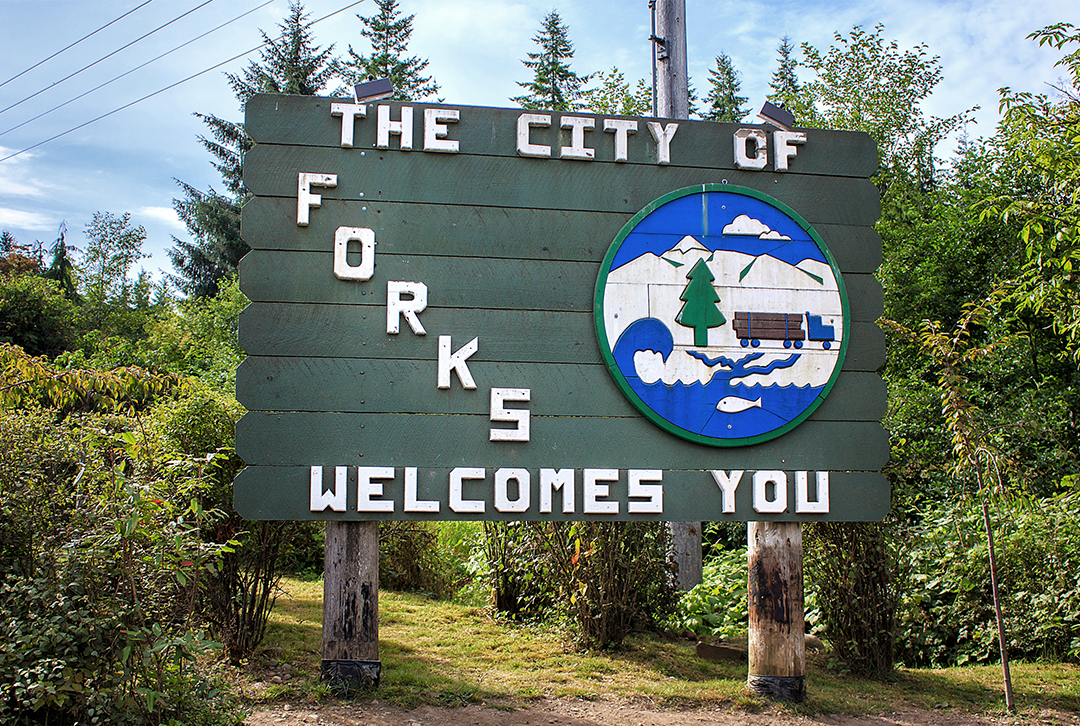 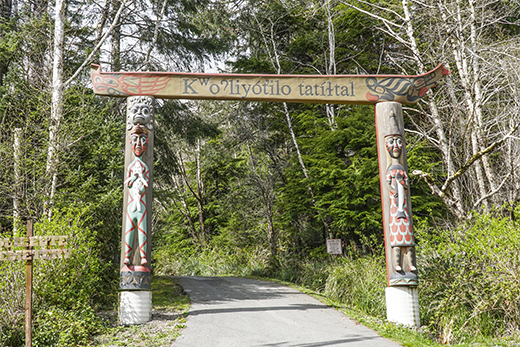 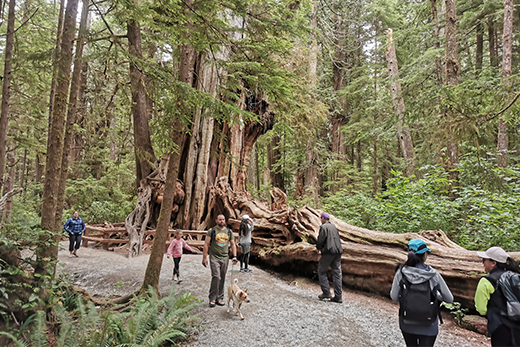 Forks has been famous for forestry for its rich supply of needleleaf trees.

Steeped in Vampire Culture, Forks
Forks, Washington, is a small town located in a corner of the Pacific Northwest in the United States. Washington is sandwiched between the Pacific Ocean and the Rocky Mountains. To the north, the region borders the Canadian province of British Columbia. It takes about three and a half hours by car from Seattle, the biggest city of the region, to get to Forks.
Originally, Forks had an active timber industry thanks to the abundant forest resources in the region. Logging tours are still available today, which gives you a hint about the local significance of the industry. It was the movie that brought the small town a renewed fame as a tourist destination. The vampire saga takes place in Forks where Bella, the female protagonist, lives. (It was actually filmed in Portland.) Over a decade has passed since the movie was made, but ‘Twilighters’(fans of Twilight) have not stopped dreaming of visiting the small town where Bella and Edward(played by Robert Pattinson) fall in love. 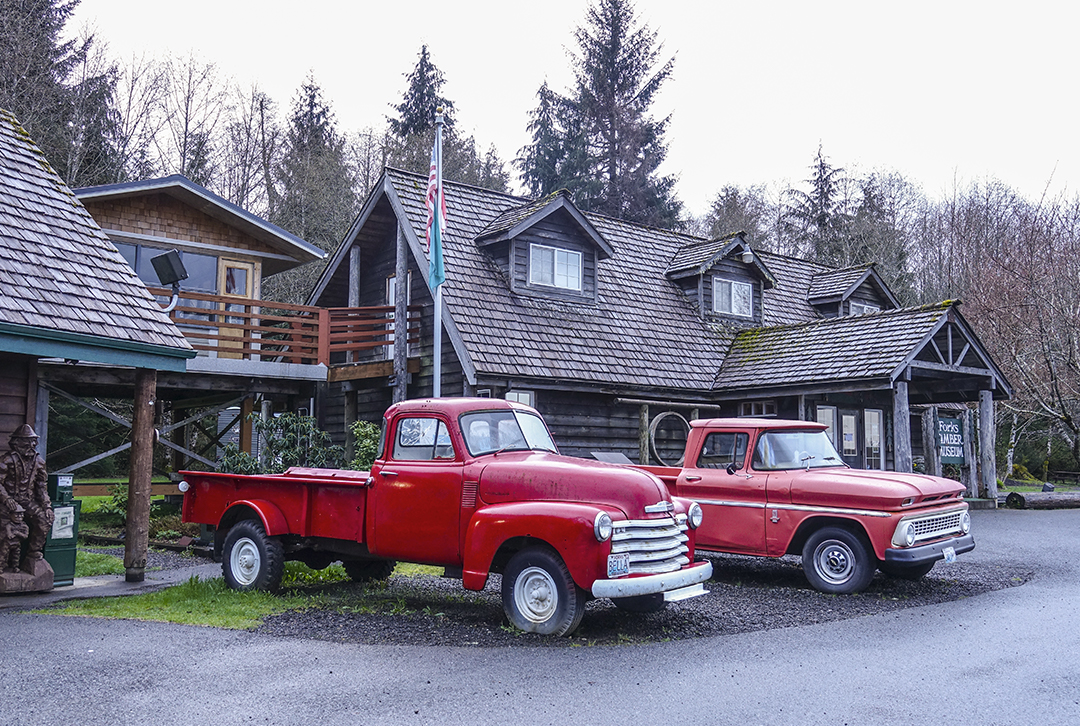 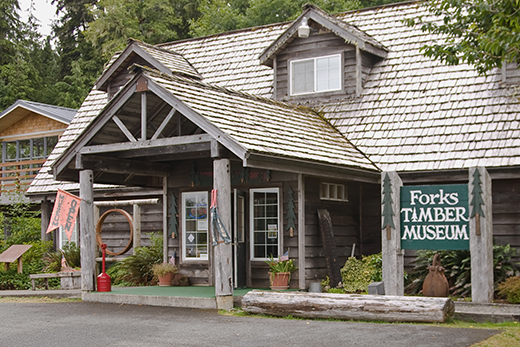 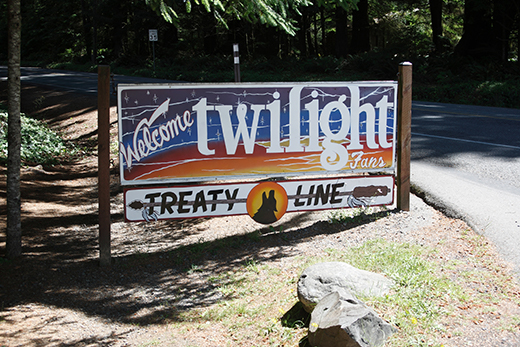 Forks was the location for the popular <Twilight> film series, adapted from the novel of the same title.

The signature activity of Forks is, therefore, none other than ‘Twilight Tour.’ Departing from the Forks Visitor Center, the tour includes visits to Bella’s house and school, Forks Police Station, City Hall, and a community hospital, all of which are featured in the movie. You can even see the 1953 Red Chevy that Bella drives. Not far from the city, there is Hoh Rainforest where the movie was filmed. It’s where Edward reveals to Bella his true identity.
With its name ‘Hoh’ originating from the Native American language, the temperate rainforest presents a thick canopy of primeval trees that have grown well over 50-60m in height. Along with the giant spectacle, the rainforest is also famous for the ‘Hall of Mosses,’ a 1km trail course featuring diverse mosses and ferns contributing to the area’s mystical atmosphere. 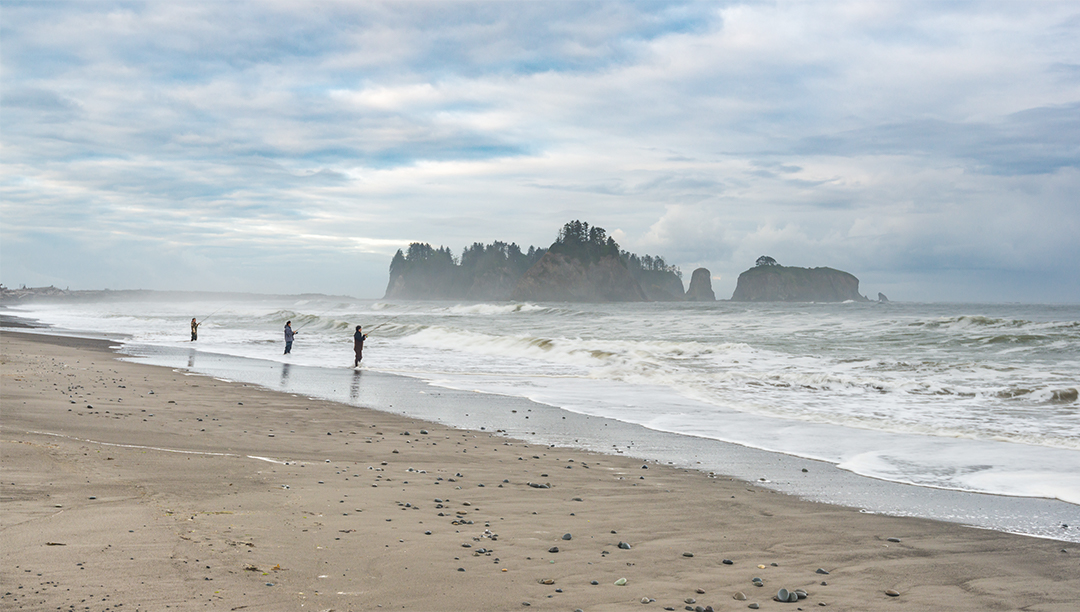 Retaining Immemorial Charm, Rialto Beach
There is another place known to be just as beautiful as the town of Forks in the northwest of Seattle. It is ‘Rialto Beach’ also appearing in the movie. You are to drive about 23km, approximately 20-25 minutes, to the west of Forks to get to the beach.
Rialto Beach is located within ‘Olympic National Park,’ the most famous park in Seattle. Designated as a national park in 1938, the Olympic is well-known as home to a wide range of flora and fauna, such as Douglas-fir and Western Hemlock trees and animals, as well as for the spectacular scenery of Mount Olympus. Tourists heading for Rialto Beach usually check out nearby beaches such as Ruby Beach, Hoh Rainforest, and Lake Crescent as part of their itineraries. 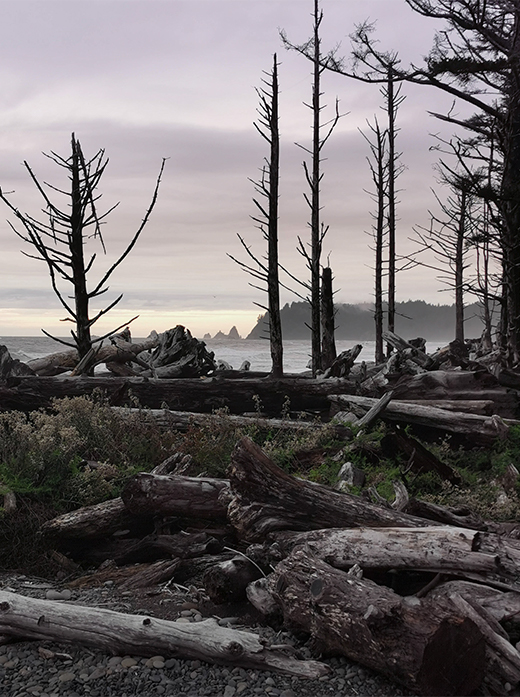 Bordering the Pacific Ocean, Rialto Beach belongs to the Native American Reservation that still retains the ancient natural beauty. A massive coniferous forest stands like a primordial fortress guarding the beach, and billowy waves keep rolling in from over the horizon. The beach is covered with coarse pebbles instead of fine sand, yet the most impressive sight is that of the tree graveyard formed along the shore. Huge tree trunks that have piled up on the beach after floating around the sea. The immense scale of the scene where trees are lying on top of each other is truly unforgettable. 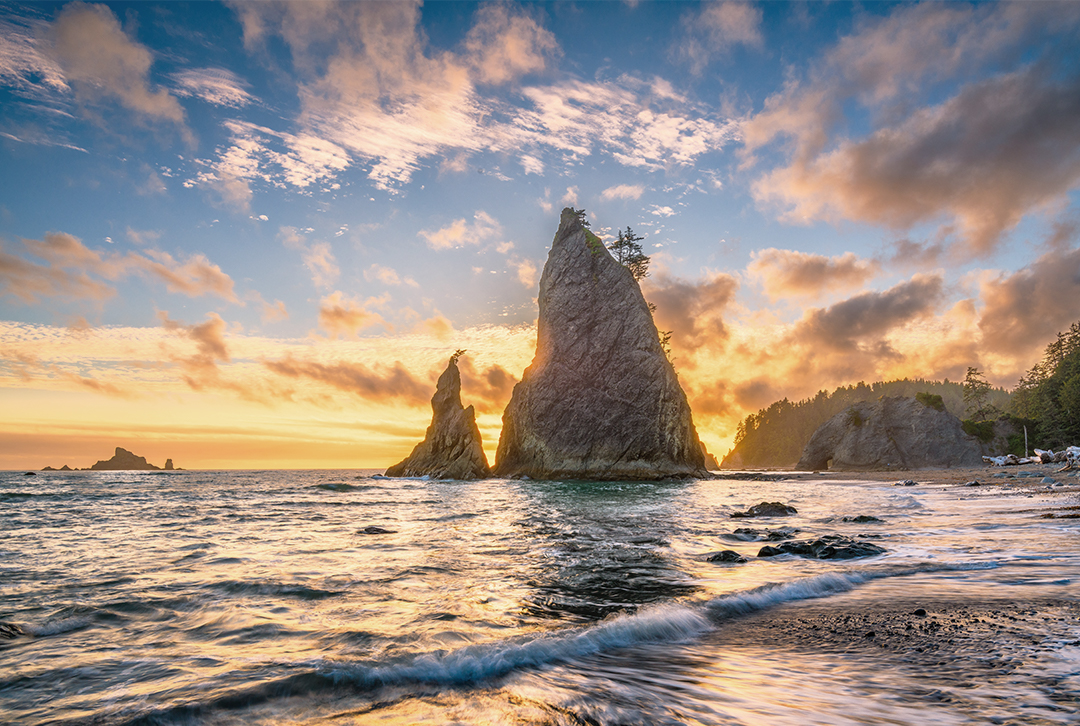 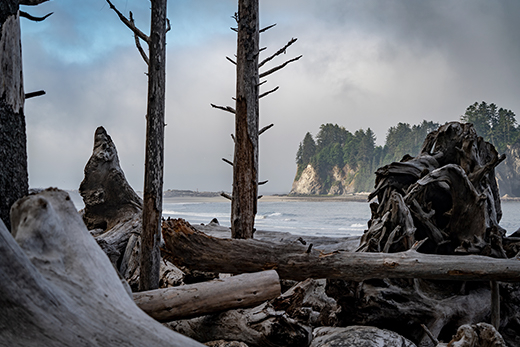 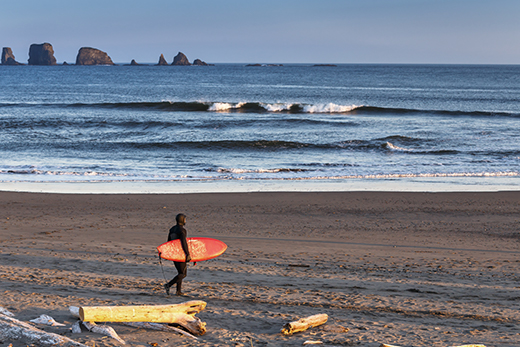 There are always surfers riding the waves in the spectacular ocean.

The seaside changes its look in each corner. The tree-covered beach has a deserted vibe, whereas the beach featuring strange-shaped rocks resembles a sculpture garden. A vertical cliff right off the sea and a wet fog create an illusion that the rocky island does not belong in this world. The mystical atmosphere becomes even stronger on a cloudy day.
Forget about smartphones and traces of civilization. Instead, try to have a time of contemplation at Rialto Beach. Arrange an ad-hoc sitting area by putting a piece of cloth on top of a flat tree trunk and wait for the sunset. You may just be able to regain ‘inner peace’ that you’ve long forgotten. 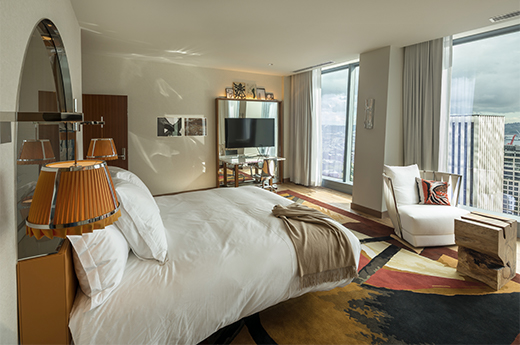 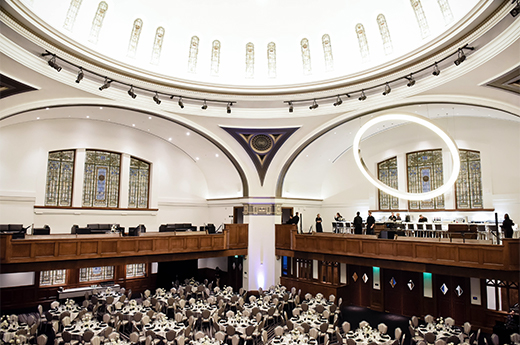 Where to Stay in Seattle: LOTTE HOTEL SEATTLE
Opened in September 2020, LOTTE HOTEL SEATTLE is located in the 44-story building on 5th Avenue in Seattle’s Midtown. The building’s glassy façade mirrors sunlight and the surrounding area. Creative designs with a modern flair in 189 rooms and suites were inspired by the beautiful natural landscape of Seattle. The hotel stands close to some of the major tourist destinations of the city, such as Space Needle, Pioneer Square and Pike Place Market. LOTTE HOTEL SEATTLE is an emerging landmark of the city, perfect for both business travelers and tourists.