Ahopsan Forest, Trip to See Bamboo Trees
We took a trip to Ahopsan Forest, featured in many films and TV series. You can enjoy green bamboo trees year-round in this forest, and it’s full of late-autumn vibes now. While in the area, you can also check out the nearby beaches of Gijang and LOTTE WORLD BUSAN.
It seems as if the love for bamboos is in the genes for us East Asian people. Back in the days, aristocrats hailed bamboo as one of ‘three friends of winter,’ along with the pine and plum. The common folks used bamboo to build many different types of tools for daily use, while bamboo shoots were popular food ingredients. There’s something special about a bamboo forest that is never quite duplicated elsewhere. Bamboo forests as captured in films such as ‘KUNDO : Age of the Rampant’ and ‘Memories of the Sword’ were as indelible as the stories themselves.
This fall, how about a trip to an actual bamboo forest? The bamboo forest inside Ahopsan Forest, having been highlighted in and other films and TV shows, will take your breath away with its stunning beauty, no matter in which season you make the trip. The sound of the wind coming through the bamboos will take you to a new place. The Korean red pine, one of the country’s signature trees, is joined by the sun tree, the cedar tree and the oak tree inside Ahopsan Forest. There is no shortage of phytoncides. 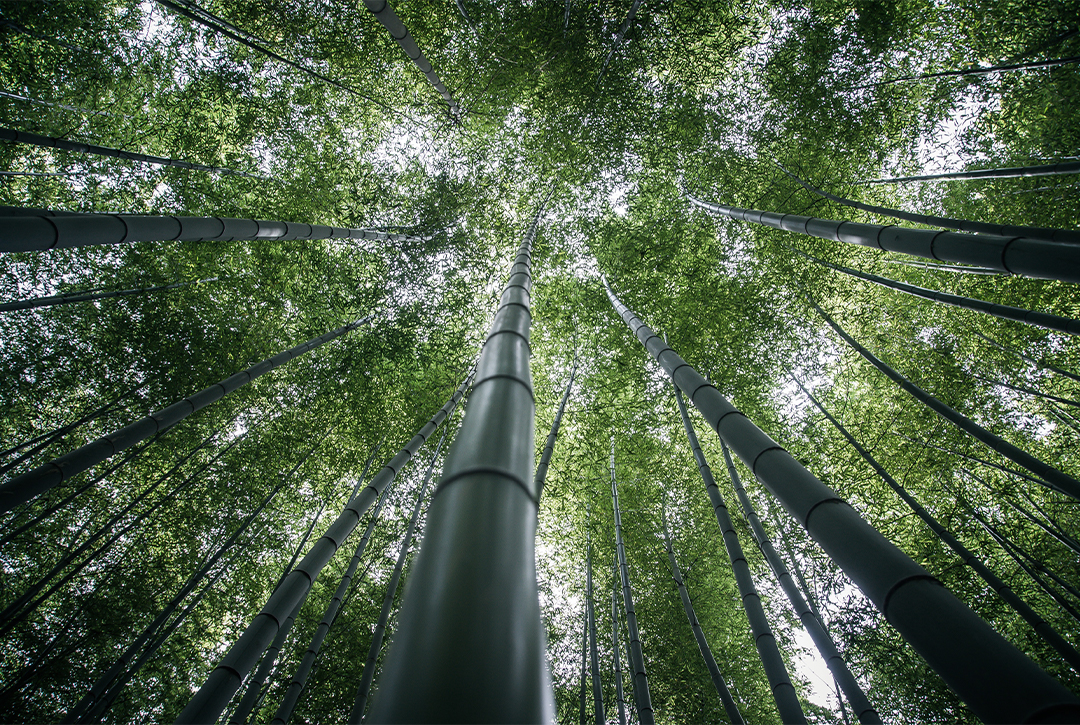 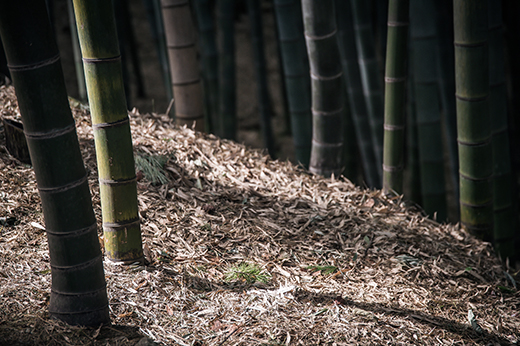 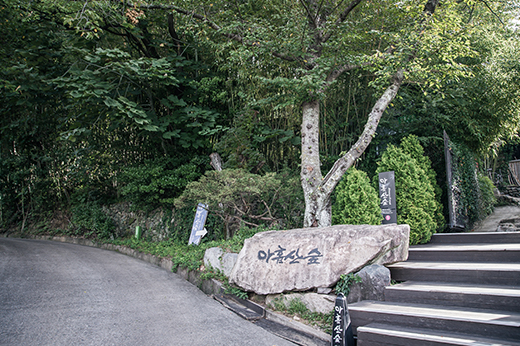 Ahopsan Forest, 400 Years of History
Ahopsan is so named because it has nine peaks (with ‘ahop’ literally translated to ‘nine’ in Korean). And yet, even the highest of them only stands 361 meters above sea level. Ahopsan provides an ideal fall hiking experience, a nice stroll for a couple of hours while taking in the views of the main ridge of Geumjeongsan in the distance and Hoedong Reservoir. Tucked in one corner of Ahopsan is Ahopsan Forest, designated ‘Beautiful Forest’ by Korea Forest Service in 2004. This is not an amusement park or a tourist spot. The forest is privately owned. You can enjoy a quiet, therapeutic walk but must not leave your trace. The Nampyeong Moon clan, who settled in the area some 400 years ago, immediately after the Japanese invasion in 1592, owns the forest. They hadn’t opened the forest to the public for centuries, but started letting in a limited number of visitors in 2015. The clan has been in Gijang for so long that it’s also referred to as Midong Moon, after one of its branches. And Moon Baek-seop, the eldest son of the eldest son in the ninth generation, decided to swing the doors wide open. He believed he couldn’t keep such gorgeous views to himself. 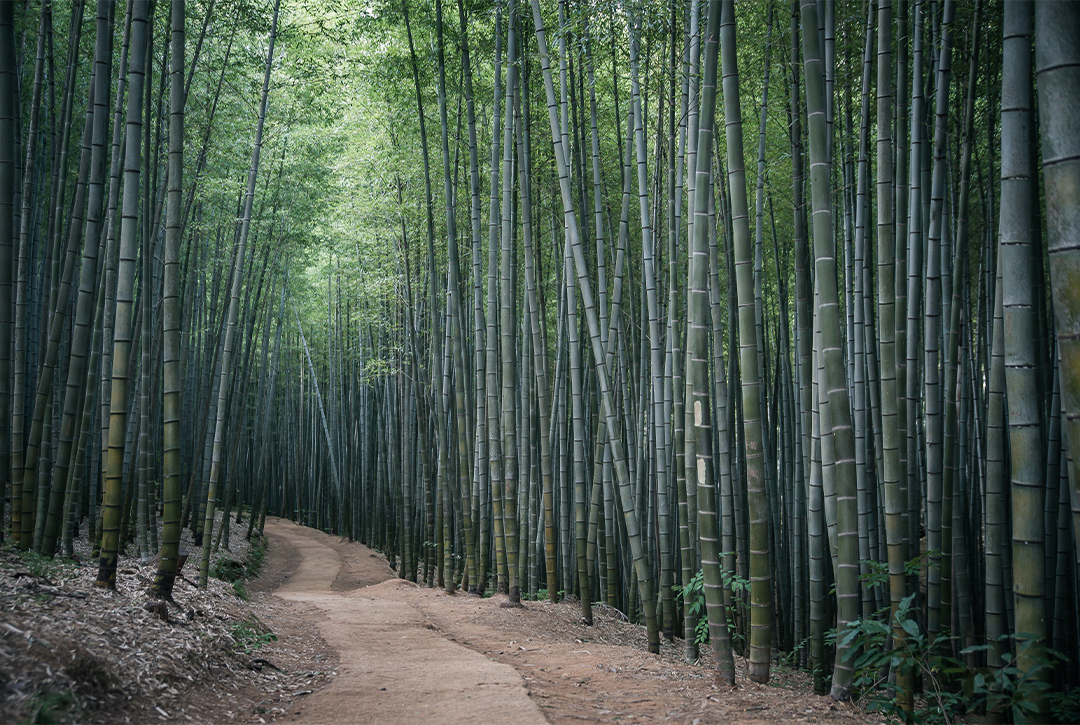 The legend has it that, during the Japanese colonial period, when the Japanese military raided the Moon clan’s head house, someone pretended to try to hide some brassware before getting caught to divert their attention. The Japanese soldiers, happy with their booty, left with brassware but did not touch the pine trees. After the liberation, the grandfather of Moon Baek-seop borrowed a bulldozer from the U.S. military to pave a forest trail, the first of its kind for a privately-owned forest. He wanted to establish a framework for systematic management of the forest. In the 1960s and 1970s, Moon brought leftover food from nearby diners and called in manure trucks to get fertilizer for the trees. The forest retained its natural beauty. 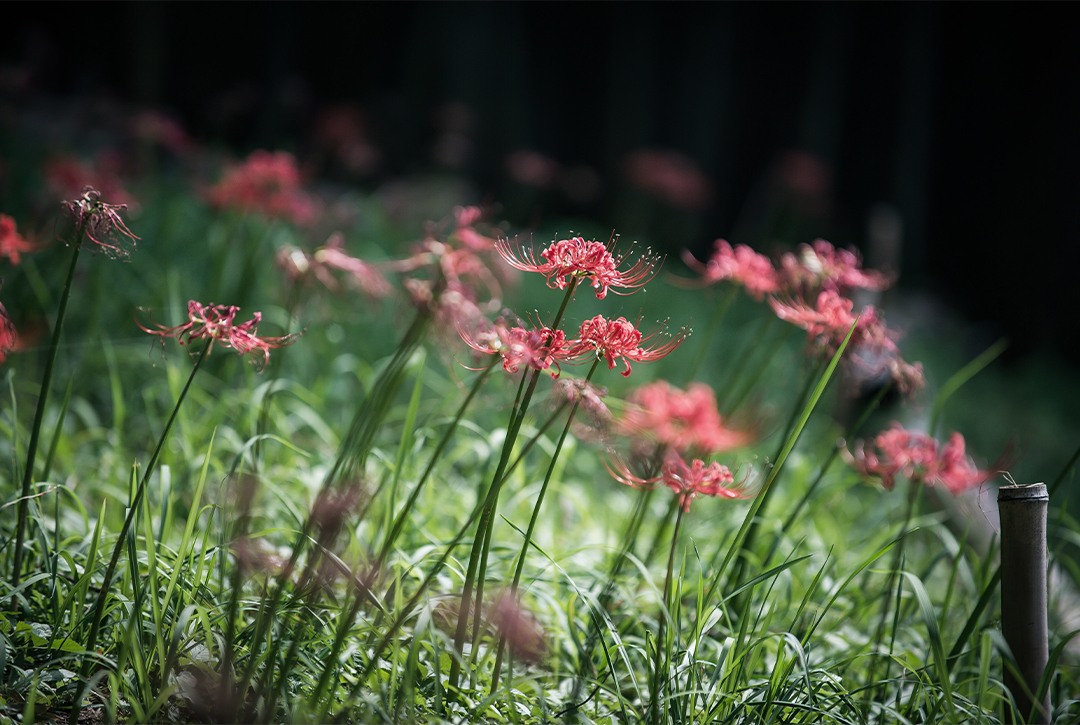 Vegetation surveys were done on Ahopsan Forest from 2002 to the late 2003, and they showed that 529 species of plants, including endangered big-root cymbidium, were living there. The forest has also been a paradise for animals. The surveys showed five endangered species on the ground, such as the golden frog, freshwater tortoise, terrapin, hobby and rock mamushi. There were four natural monument species, including sparrow hawk, grey frog hawk and scops owl. Wild rabbits, elks, pheasants, woodpeckers, weasels, badgers and fireflies, among others that we don’t get to see often, all enjoy natural surroundings inside Ahopsan Forest. And to keep things that way, they still don’t use chemical pest control at Ahopsan.
Ongoing efforts to preserve the forest in its natural form go beyond your imagination. Any bamboo with someone’s scribbles or doodles will be uprooted. When you visit the forest, you must not leave any mark behind. Each step you take inside the forest will be a humbling experience, and you will realize just how much healing power nature can offer.
Ahopsan Forest covers 520,000 ㎡ but only certain areas of the forest are open to public. The admission is 5,000 won for everyone, regardless of age. 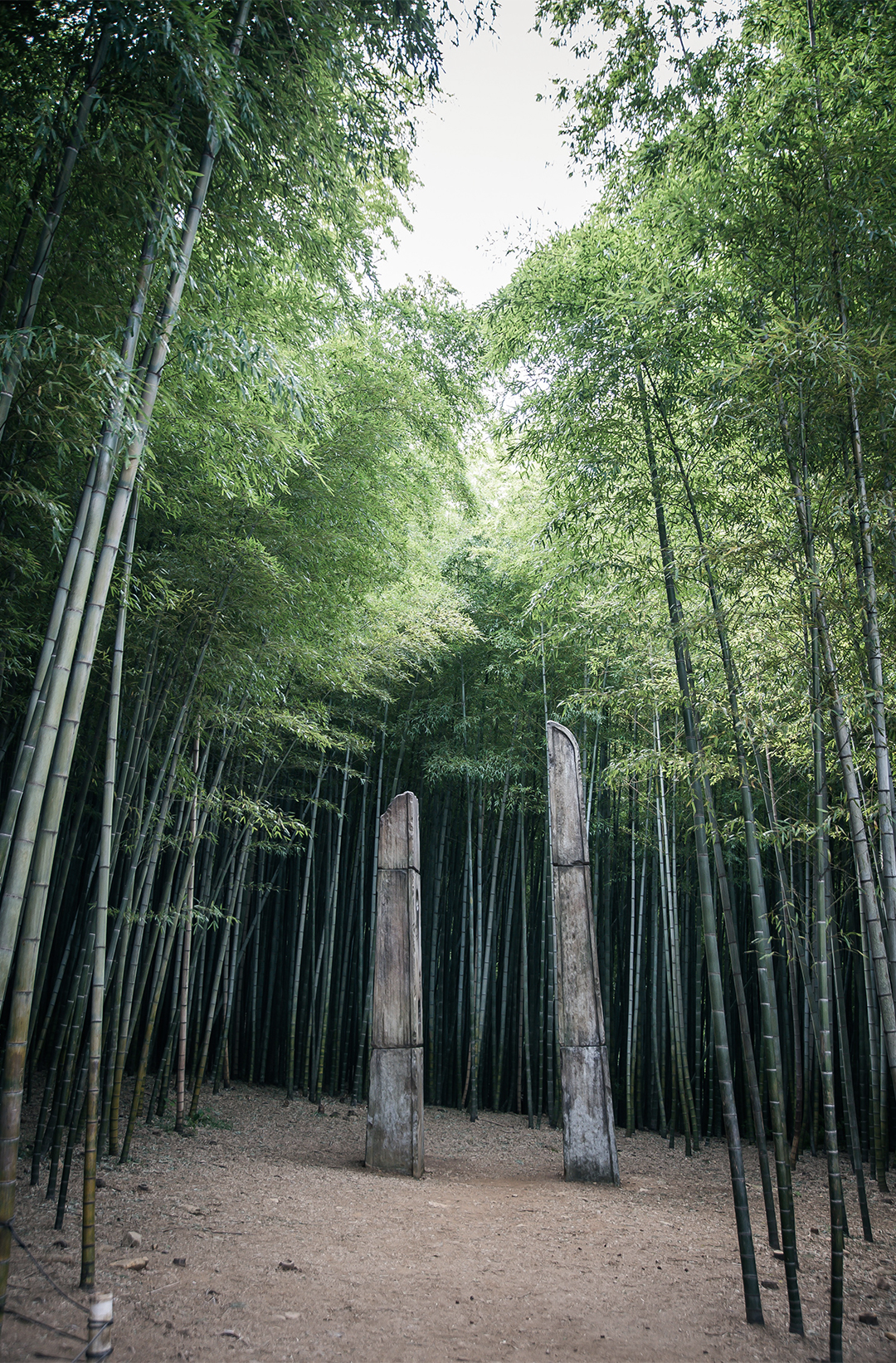 Trees Galore
As soon as you enter, the bamboo-lined trail will come into view. To the left, you will see piles of cut trees stacked on one side. It’s the field for shiitake mushroom. You will soon reach a fork in the road: to the right is a hilly shortcut and to the left is a gentler path. You will find beautiful wild flowers in the swamp along the left side.
At the point where the two paths converge again stands the Korean red pine tree. A study done in 2015 said the tree was well over 400 years old. It’s difficult to find a tree as old and as well preserved in this region. These pine trees have been designated as species to be protected. Ahopsan Forest is home to 116 such trees. 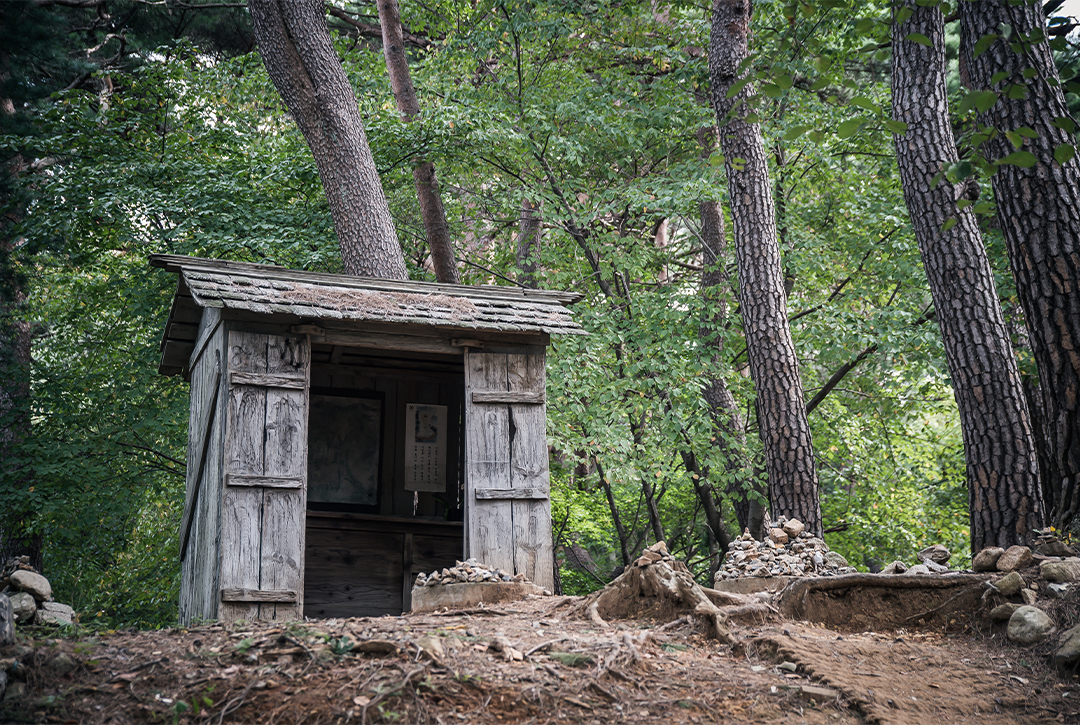 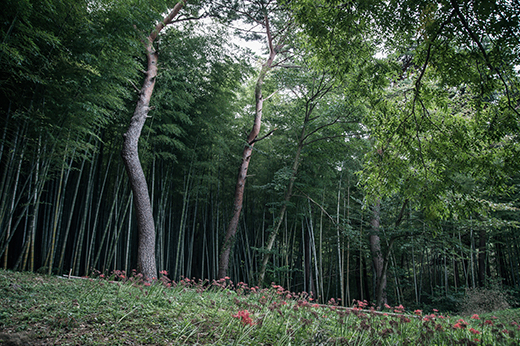 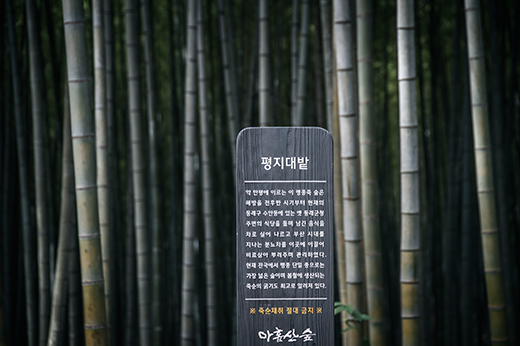 Across the pine forest is the mao zhu forest. This type of bamboo is native to China, and it has edible shoots. It has the largest diameter among bamboos. The incredible tall mao zhu trees provide a shade, keeping you cool during summers, and the sunlight that pokes through these bamboos will make you feel all refreshed, like welcoming raindrops amid a drought. This is the exact same area where mao zhu bamboos were first planted on Ahopsan 200 years ago. Interestingly, there is a circular spot in the center of the forest where no bamboo has grown. People during the Joseon Dynasty believed it to be a holy spot, created by the guardian spirit of the mountain, and they gathered here for rituals and gatherings. 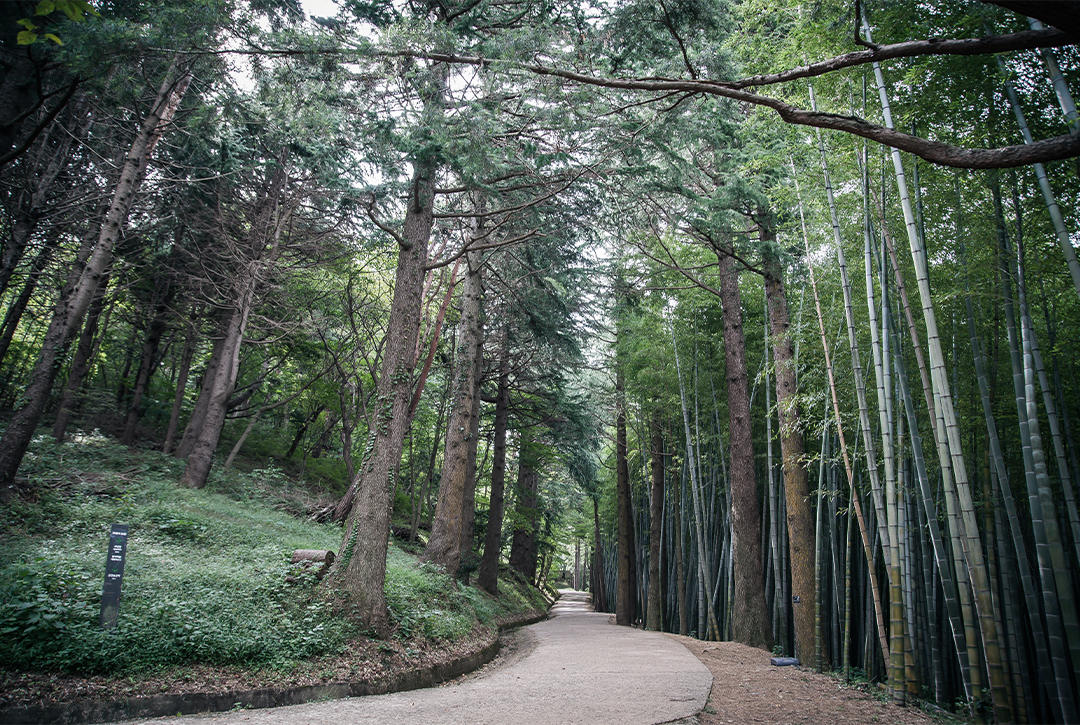 Past the mao zhu forest, you will reach a trail with Himalayan cedar and mao zhu face each other. This is the coolest spot in the forest, and that’s saying something because there’s constant breezy there. The path on the left that leads to the peak of Ahopsan lined with oak trees. Go straight up, and you will reach sun trees and cedar trees. The path takes a long U-turn and will meet with the path on the right side, with more pine and bamboo trees on the way. Standing across is the second mao zhu forest, which was featured in the TV series and the film. Ahopsan Forest is the largest habitat for mao zhu bamboo trees in Korea. The second mao zhu forest has a fairly long trail, with tall bamboos lined up on either side to greet visitors. 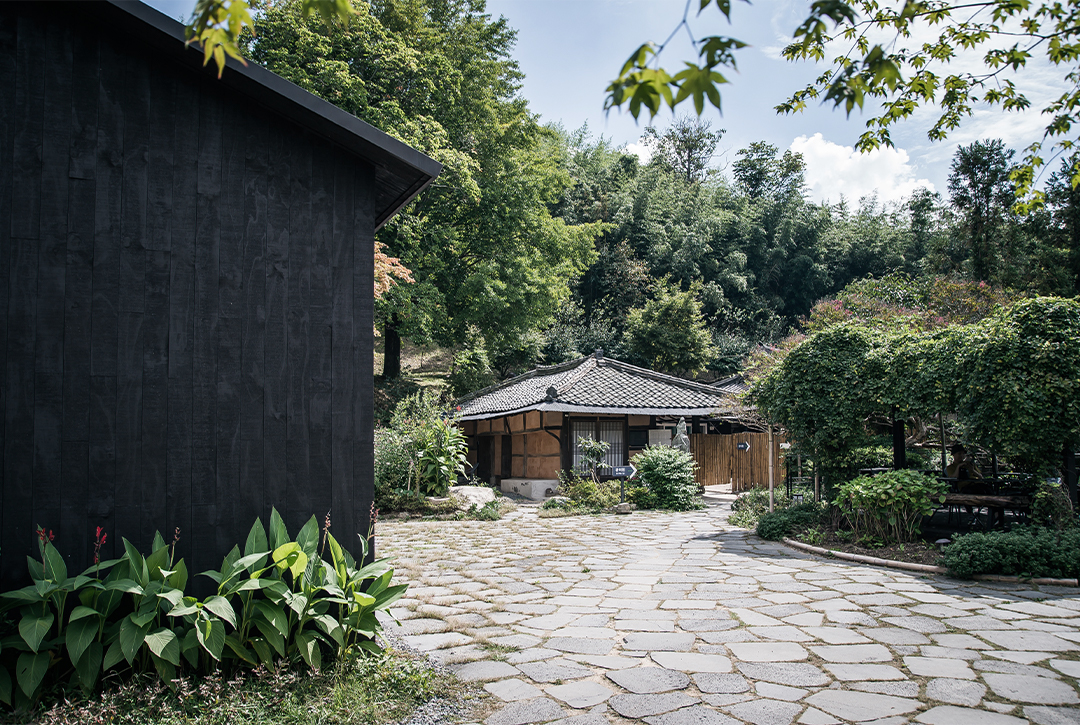 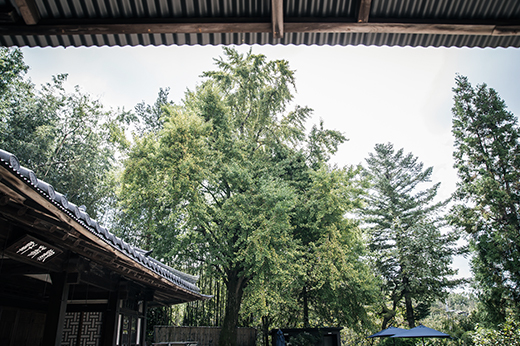 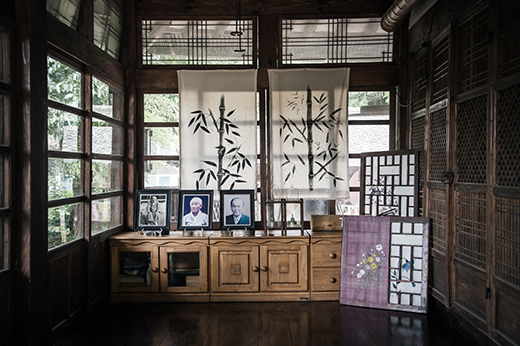 Near the exit stands a hanok home. It’s called Gwanmiheon, which literally means, ‘valuing even the most trivial plants, such as bracken.’ The Moon clan lived in that house for some 60 years. There are no nails in this traditional hanok, built entirely with trees from Ahopsan Forest. People could still live there but Moon Baek-seop moved his family elsewhere. It’s rented to workers who come for maintenance work on the forest, but it’s not open to the general public. Even after you leave the forest, there will still be bamboos all around you. A garden of tortoise shell bamboo trees will see you off. Its flanked by the gold-tinted Belgian evergreen and black bamboo.

Orangdae Park
This is a scenic sunrise spot. Ahopsan Forest opens at 9 a.m., and so if you want to see a different side of Gijang earlier in the day, go see the sun at Orangdae Park. Though it’s called park, it’s really a walking trail in front of Orangdae. The cool breeze off the ocean will always feel refreshing. The name of the place comes from the mythical tale that five scholars who were exiled to Gijang met there for drinks. Across the ocean is Yongwangdan of Haegwangsa temple, the only seaside Buddhist hall in Korea dedicated to Yongwang (Dragon King). In the middle of the well-manicured path at Orangdae stands a swinging bench.
Address San 78, Yeonhwa-ri, Gijang-eup, Gijang-gun, Busan 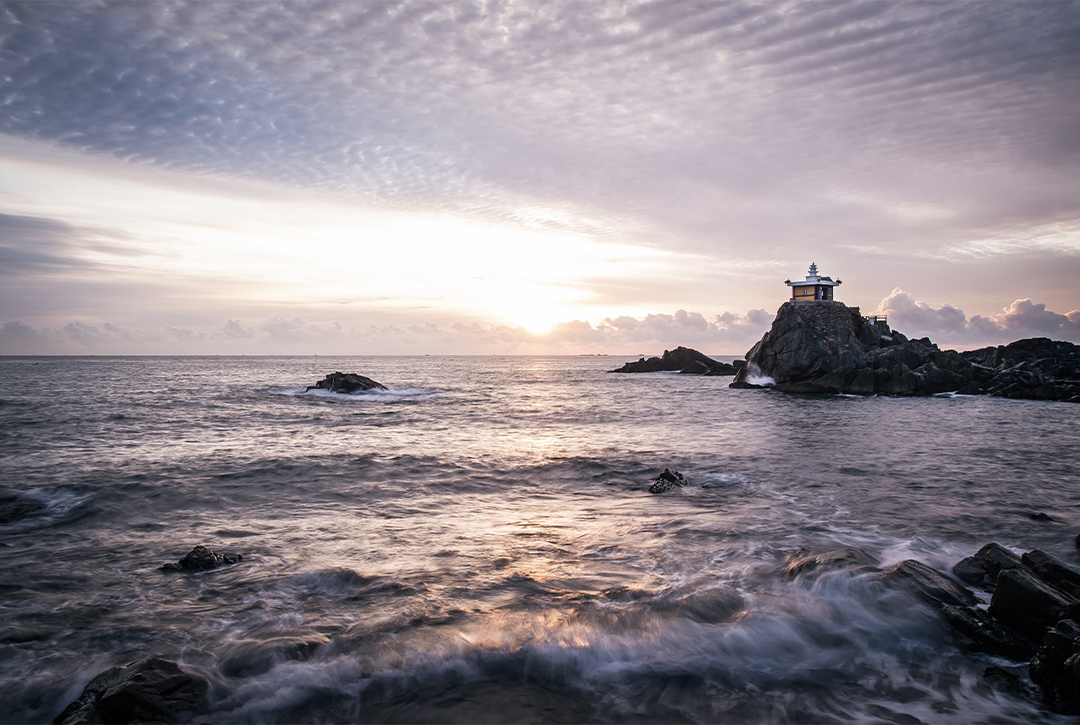 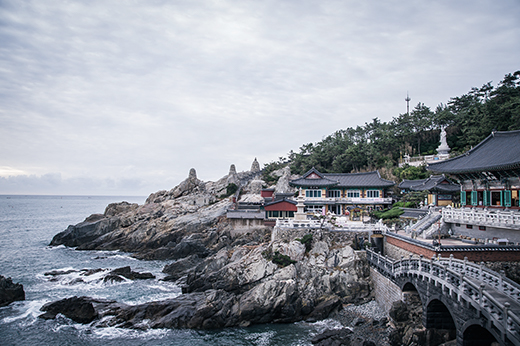 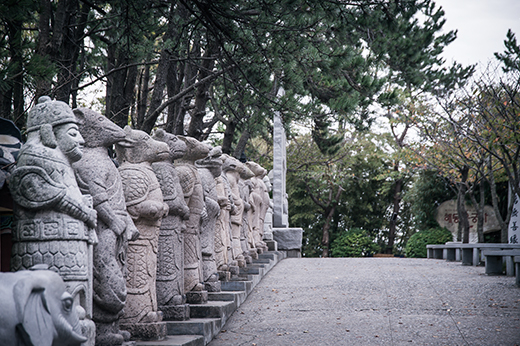 Yongso Well-Being Park
The park sits around the reservoir located between the old Gijang street and Gijang Eupseong. It has a nice deck trail. You can also take an exit to Sanseongsan forest trail. The peak of the mountain is about a 30-minute hike up that trail, with the ocean off Gijang in view. The reservoir has a small boat for use as a prop in the background for photos. The well-run wetland has a wide variety of plants. It’s a good place to stop by after touring Ahopsan Forest or to take a nice little walk after a meal. It’s a popular photo spot for social media enthusiasts.
Address San 7-2, Seobu-ri, Gijang-eup, Gijang-gun, Busan 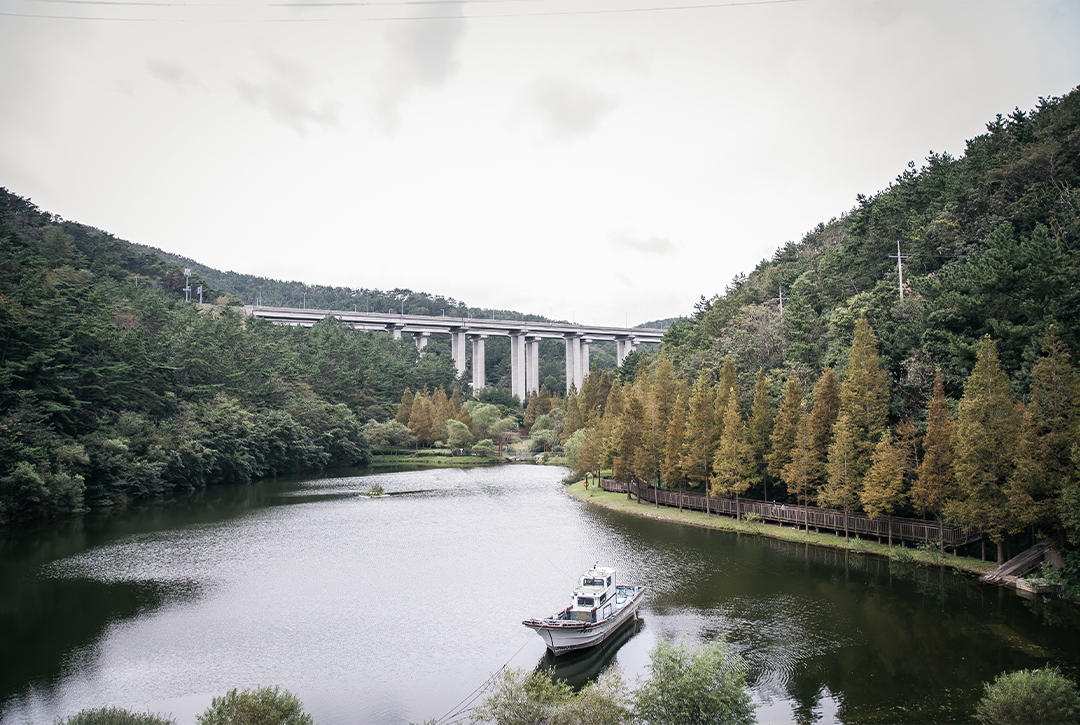 Jukseong-ri Waeseong and Haesong, Jukseong Dream Cathedral
Jukseong-ri Waeseong was built during the Japanese invasion in 1592 by the Japanese forces for protection up the hill. It’s not a complete forest but you could see how the Japanese built their fortress differently than Joseon. There are stairs at the bottom of the hill but they won’t take you all the way to the fortress, which itself is blocked off by barbed wire. But over the stairs, you can see the beautiful haesong (black pine tree). It may seem like one giant tree, but there are five pine trees, each 300 to 400 years old, that have combined for the spectacular view. Just seeing the sheer beauty of those trees is worth the trip. Jukseong Church has been an oft-used setting for TV shows. Be sure to stop by for some photos because it’s not that far away from the trees.
Address 601 Jukseong-ri (fortress), 249 Jukseong-ri (pine trees), 134-7 Jukseong-ri (church), Gijang-eup, Gijang-gun, Busan 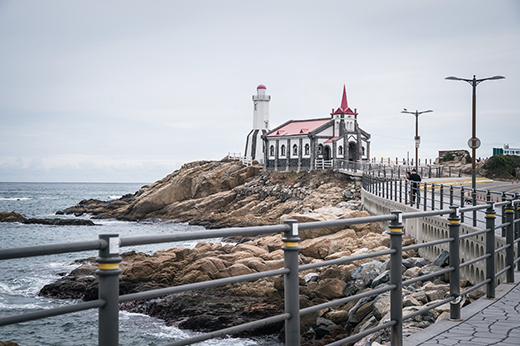 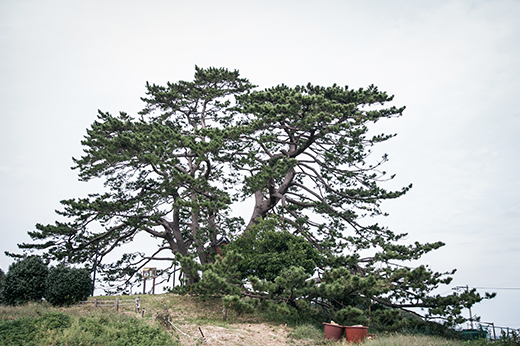 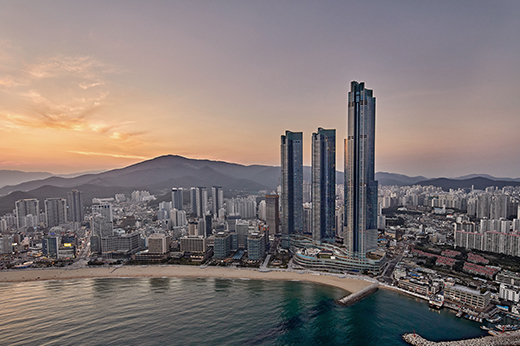 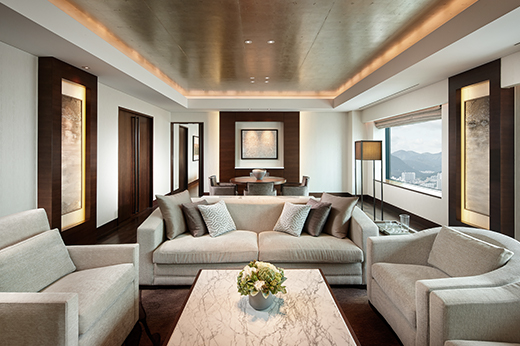