Deep into Fantastic Can Gio Mangrove Forest
We arrive at Can Gio Island located an hour drive away from Ho Chi Minh City. A UNESCO biosphere reserve, the island is also known as Monkey Island, and visitors are greeted by the extraordinary shrubs growing in the coastal wetland area as well as monkeys occupying the dense forest. We are about to enter this unfamiliar jungle.
We ride a boat to explore the thick forest. The towering trees on both sides of the waterway extend their branches high up, creating a cave-like space through which the boat proceeds. The squawking sounds of crying monkeys echo in the area, and startled birds take off here and there with hurried flappings of their wings. The boat moves slowly making a line splitting the muddy waters. “Let’s go through the jungle. Let’s crawl through there. When you reach a swamp, be careful of the crocodiles. Crocodiles!” Without realizing, we sing the familiar tune of the song in our heads, and our hearts beating to the rhythm sink suddenly at the lyrics warning us of the possibility of crocodiles nearby. 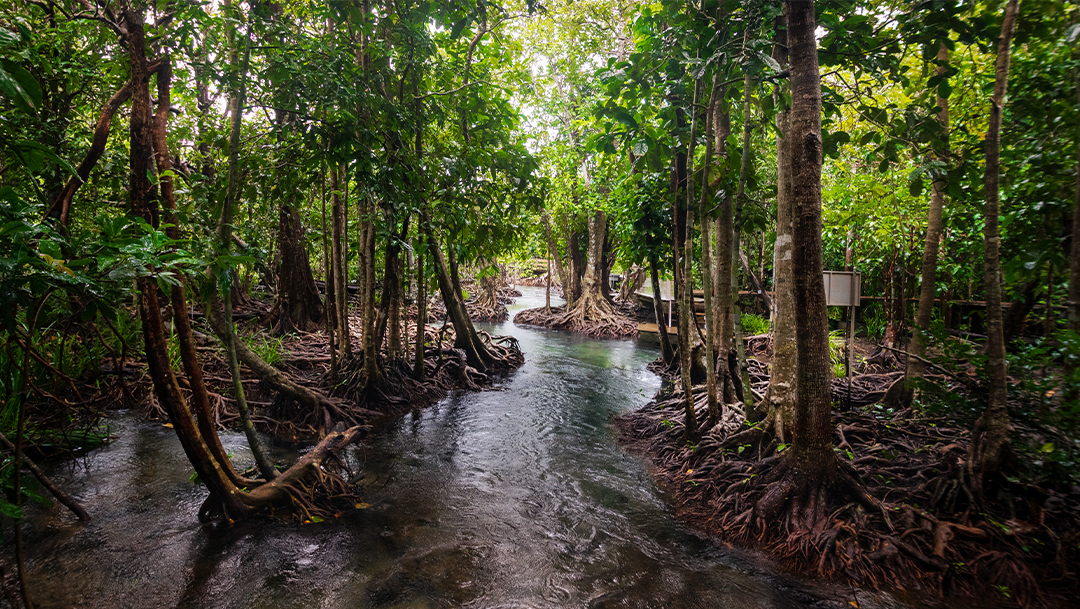 The forest is largely made up of dense subtropical jungles.

We encounter scenes only likely in children’s dreams or fantasy movies. Keep in mind, however, that this is not a filming site but a real, tangible world. It is hard to believe that less than 40km south of Ho Chi Minh City, Vietnam, there is a jungle where crocodiles, monkeys, birds, and even paleozoic plants nestle? Let’s explore the Can Gio Mangrove Forest where nature offers us a glimpse into the authentic wildlife of Southeast Asia that is very much alive and well. 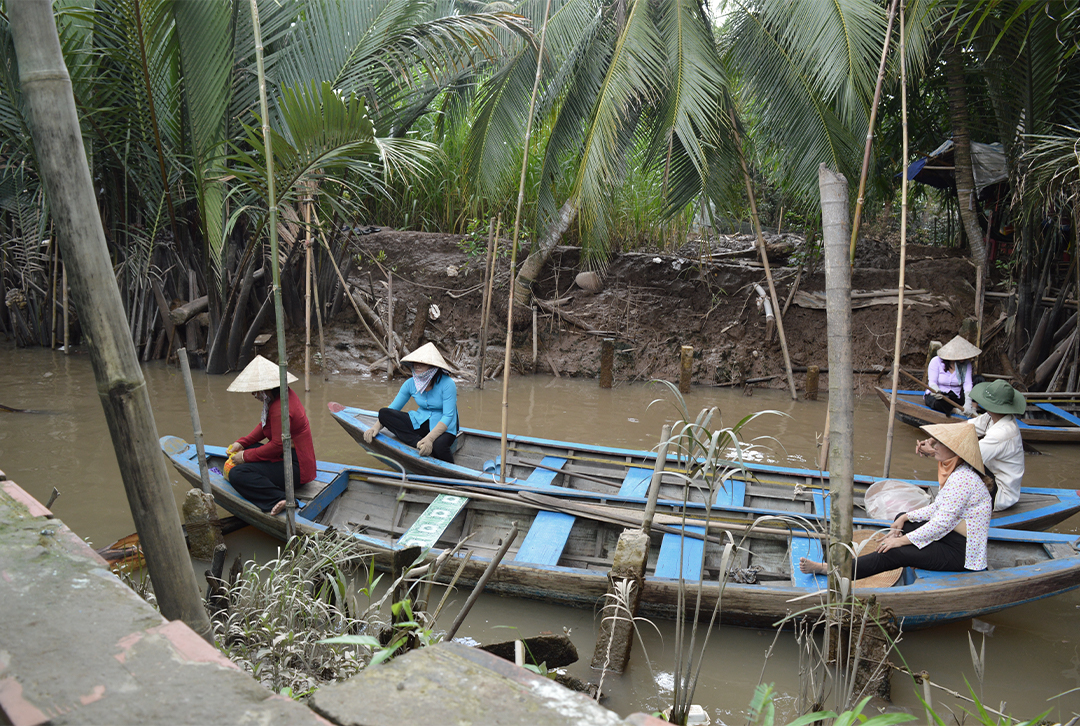 The best way to approach the mangrove forest is via a canoe ride.

Subtropical Wetland Shrubs, Mangrove Forest
Located in the southern end of Vietnam, Can Gio Island is a massive jungle with an area of 757 million square meters and home to one of the world’s biggest mangrove forests. Seven times as large as that of Yeouido in Seoul, the forest presents over 150 species of wildlife including plants, crocodiles, lizards, and bats, some of which are rare. Such biodiversity of the Can Gio wetland has led UNESCO to designate the area as a biosphere reserve in an effort to preserve its wildlife sanctuary. 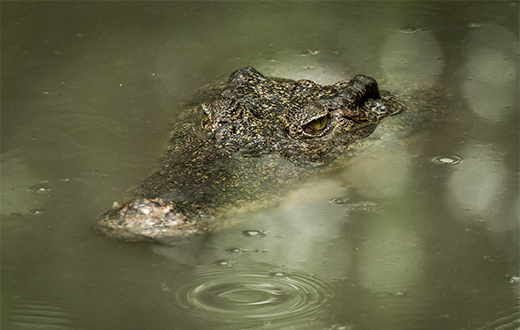 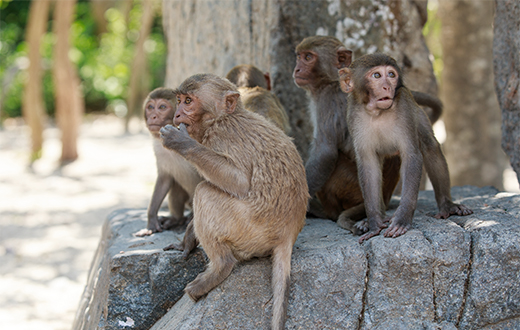 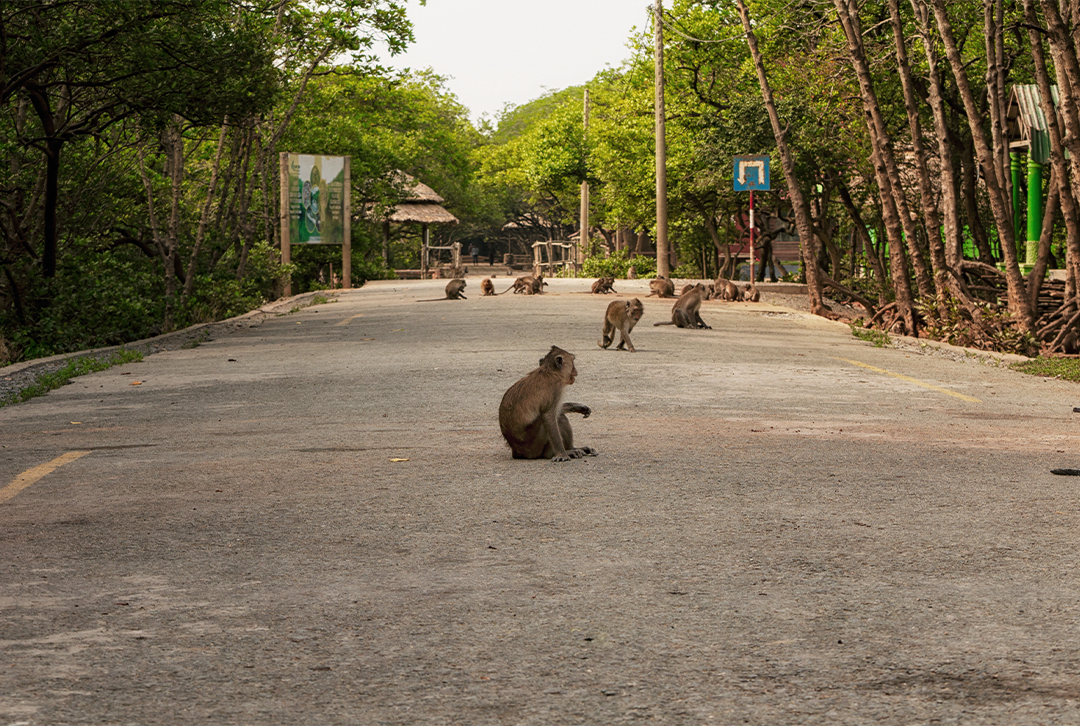 Monkey Island literally has a huge number of monkeys dwelling in it.

A jaw-dropping scenery unfolds before you as you row your way into the reserve. Various species of birds and insects fly around in the air while crocodiles crawl in the marsh. If lucky, you can see some rare crabs and mudskippers. That’s not all. The most sensational of the animals living in the Can Gio forest are the crab-eating macaques. There are roughly 15,000 monkeys who made the forest their home. Tourists visit the island to see the monkeys, while the latter flock around human visitors out of curiosity. People are both amazed and terrified at the sheer number of monkeys out and about. There are probably many more than the number of all the monkeys anyone will see in a lifetime, under normal circumstances. Macaques living in the island are known for their innocent appearances as well as naughty behaviors. They can easily pick your pockets for glasses, hats, shoes, wallets, and even mobile phones, so stay vigilant. It is nevertheless a rare opportunity to engage in a direct interaction with apes in nature by giving them food, so try to be in the moment with them, soul to soul, and be as brave and natural as possible. You will have a deeply moving experience that will be cherished for life. 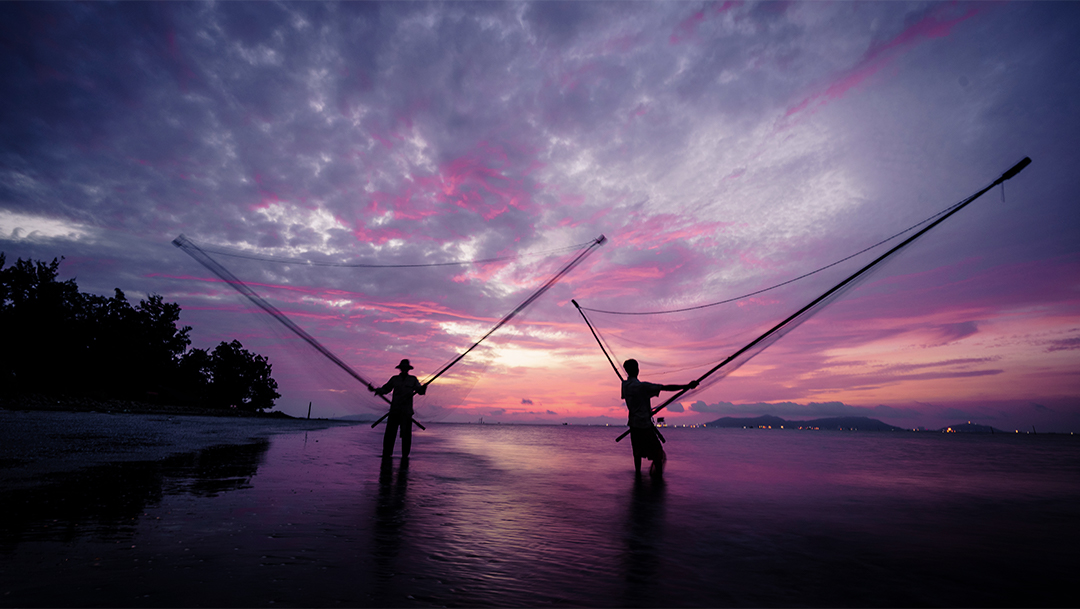 Local people of Can Gio Island make their living through fishing and salt fields.

From Trees to Forest, Miracle of Can Gio
A mystical tree species plays a dominant role in forming such a rich ecosystem in Can Gio Island. Known as a living fossil that has existed since the Paleozoic era, mangrove trees grow naturally in tropical seas, estuaries, and wetlands. Unlike other trees, they can survive in salt waters, muds, and tideland. The secret to their survival is in the soil and their roots that stick out of the water. Pneumatophores, the roots of mangrove that function as breathing tubes absorb oxygen enough to supply to the entire tree. The intricate mesh of mangrove roots provide a safe habitat for the entire ecosystem of the forest. The flow of water is weaker behind the roots, protecting various aquatic plants and animals. The crevices in the entangled roots are taken up by juvenile fish. When mangroves form a forest, the aquatic ecosystem also grows, which in turn benefits fish-eating predators like crocodiles. The lush forest above the water provides home for birds and monkeys. 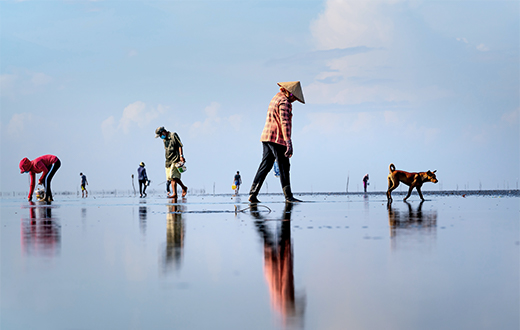 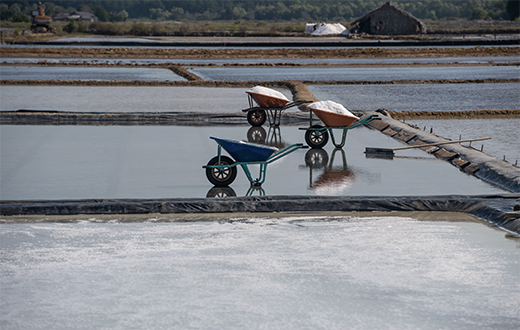 People of Thanh An, Can GIo Island, working at a salt field.

Mangrove forests have a great significance in nature, but the scenery it creates is even more noticeable. It is hard to imagine the mysterious, exotic, and overwhelming atmosphere of mangrove forests without seeing and experiencing them directly. You will witness the expression “Tree is alive.” become real. Giant mangroves spanning dozens of meters in width standing close to each other summons the image of soldiers marching out of the wetland, putting arms around each other and dancing in groups. It is such a vivid fantasy that you will feel like you can ask for words of wisdom from the thousand-year-old trees or touch their branches with your finger for a soulful connection. 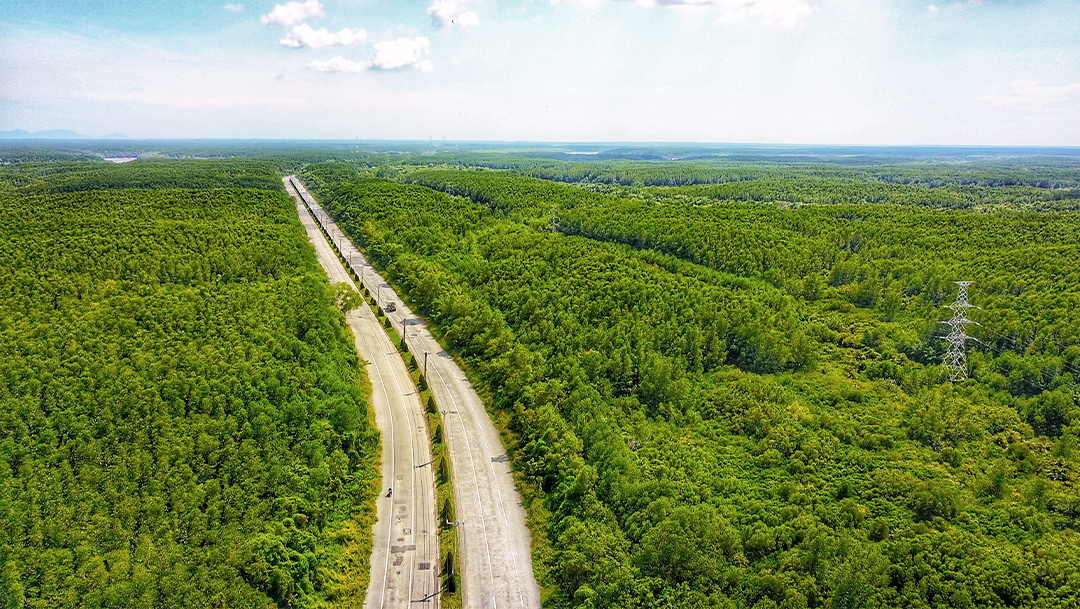 An aerial view of the mangrove forest and its surrounding area

Looking From Above
The final thing to do at the mangrove forest is to ‘look from above.’ It is highly recommended that visitors go up to the observation deck that features a roof shaped like non la, the traditional Vietnamese conical hat. From there, you can see the world covered in green. The sight of the jungle and the waterway designed by nature turns you into a bird flying high in the sky. You get to sincerely experience how small human beings are in the face of the amazing ecosystem. Take a deep breath, out of respect, and breathe out, with a humble mind. That is how you bow to nature and fill your empty heart with natural beauty, wildlife wonders, and the sublime tranquility just given to you. 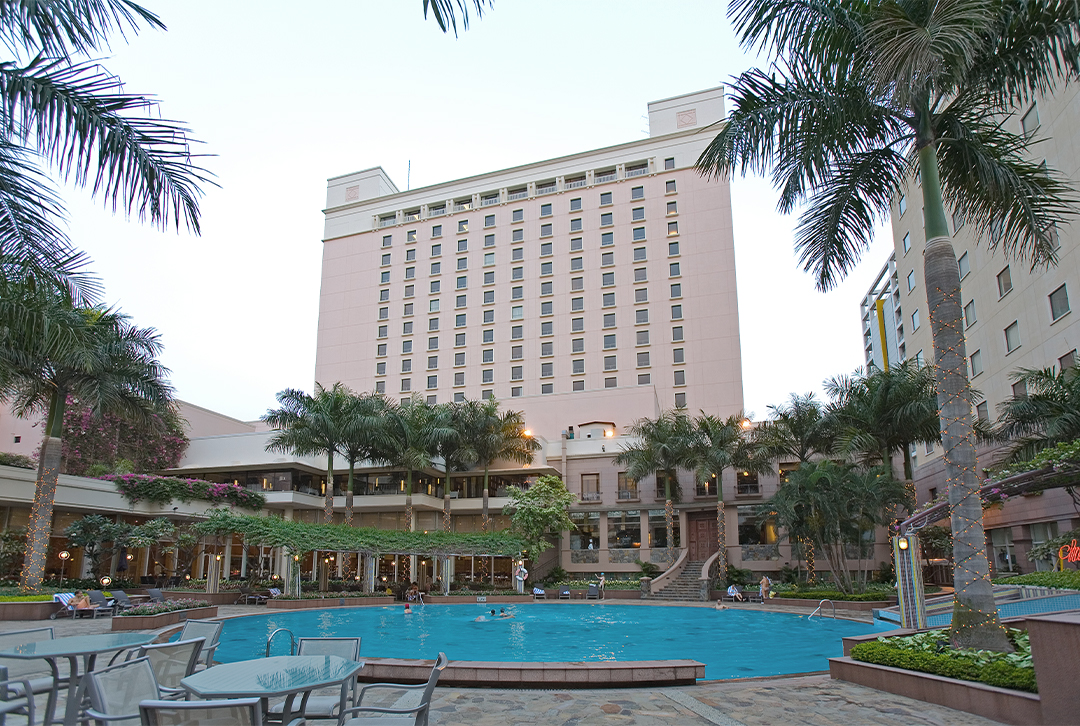 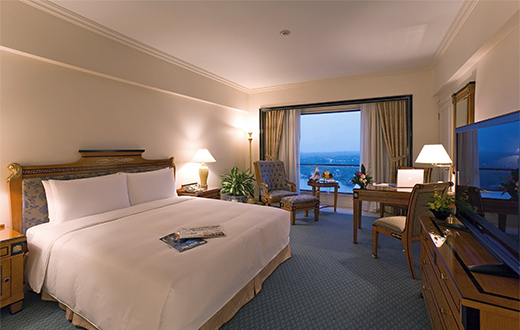 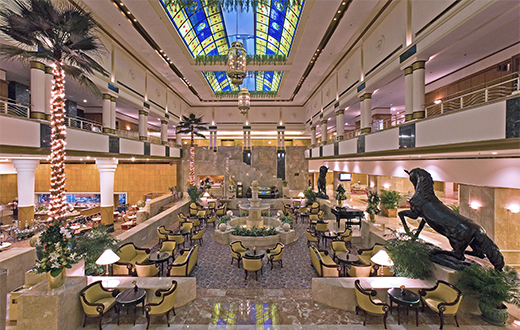 Where to Stay in Ho Chi Minh City: LOTTE HOTEL SAIGON
Located right off the Saigon River, LOTTE HOTEL SAIGON offers a beautiful river view. Its diverse, up-scale dining options include buffet restaurant Atrium Cafe featuring new cuisine every month, Crystal Jade Palace known for its world-class Asian dishes, and authentic Japanese restaurant Yoshino. In addition, guests have access to the hotel’s top-of-the-line fitness equipment and sauna, as well as the outdoor pool that is the most spacious and elegant in Ho Chi Minh City, guaranteed to satisfy their needs.