Sharing Benefits Everyone
LOTTE HOTELS & RESORTS carried out the ‘Everyone Shares’ package event in collaboration with the Korean Red Cross, donating part of the proceeds from the sales to the humanitarian cause. The partnership was a coalition to spread the warmth of hearts. We interviewed Korean Red Cross(KNRC) President Shin Hee-young about the significance of sharing and coalition.
Every LOTTE HOTEL Guest Shares Happiness
Winter is a cold season. At the same time, it is a warm season because of the fact that sharing most frequently takes place as people mark the year-end and New Year’s Day. LOTTE HOTELS & RESORTS, for its part, joined in the ‘Everyone Campaign’ event hosted by the KNRC. The ‘Everyone Shares’ package was launched, offering those who use the package a gift set consisting of a wireless smartphone charging dock and a spiral notebook. In addition, part of the proceeds from the ‘Everyone Shares’ package went to the KNRC, and the hotel generously awarded guests who present a blood donor card issued less than a year ago additional reward points of 1,000. The event was even more momentous as all LOTTE HOTELS & RESORTS brands, from SIGNIEL to LOTTE HOTEL, LOTTE City Hotel, and L7, participated.
The key message of the campaign was the community involvement and social responsibility of the corporate sector, and also sharing and coalition. President Shin Hee-young of the KNRC elaborated on the meaning of the two concepts.
Sharing Brings Together Lives
The keywords to understand Dr. Shin’s life are children and blood. While working as a pediatrician, he realized infectious diseases manifest differently from those suffered by adults. Some would go away on their own, while many others had no cure. He wanted to fix those illnesses, and that determination led him to the field of blood disorders. He focused on researching cells that help create blood in the human body(stem cells or bone marrow). The donation and transplantation of stem cells is crucial. 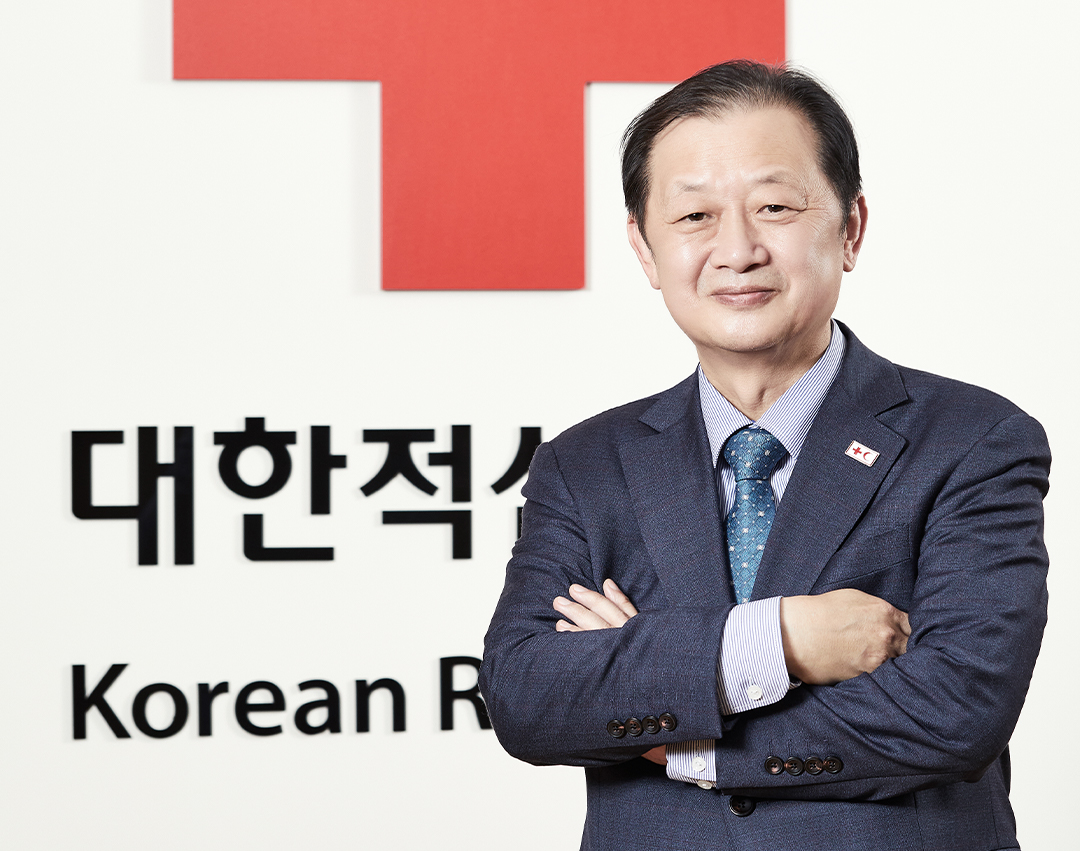 Travel - Dr. Shin Hee-young has consolidated seven KNRC affiliate hospitals across the country into one Korean Red Cross Hospital after he was inaugurated as president of the organization, and is pursuing the sharing of medical services in earnest.

After he took the helm at the KNRC, Covid-19 swept over the whole world. Meal centers across the country, including the ones operated by the Red Cross, shut down, leaving the socially vulnerable people concerned for daily meals. It was an agonizing time for Dr. Shin to see hungry children. Adults could take care of themselves, but there was no solution for children, he said. After much thought, he partnered with TV channel MBN for the ‘Golden Meal Box’ project. The goal was to order 100 meal boxes that are 10,000 won each from a restaurant by raising 1 million won. It was actually also aimed at helping restaurants that were barely keeping their doors open during the pandemic. To his surprise, the participating restaurants put at least 30,000 won worth of food in the meal box. The recipients said in unison that “It had enough food to eat with rice for three days.” Since two meal boxes were provided each week, the project virtually provided side-dishes that would sustain the recipients an entire week. As a thank you to the community that helped them, they would volunteer to clean the streets with broomsticks. There was the virtuous cycle of sharing in which an act of sharing begets another, eventually making the world a better place for everybody. After taking office as president of the KNRC, Dr. Shin has consolidated seven hospitals affiliated with the organization into Red Cross Hospital, and has been actively pushing for the sharing of medical services. For example, the newly opened ‘Nuguna(everyone) Medical Center’ is a prime example of humanitarianism the Red Cross pursues. 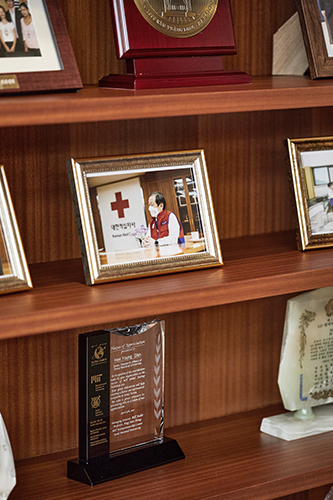 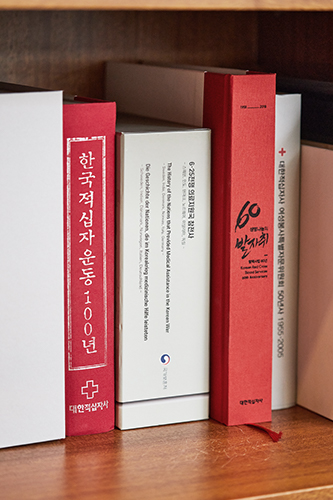 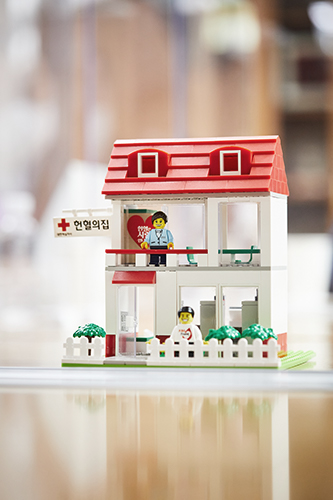 Diverse traces of the Korean Red Cross throughout history

Q. What is Nuguna Medical Center?
A. It’s an open clinic for everybody including homeless people and migrant workers. The center currently opens every Saturday for a test-run. Each week about 50 patients are visiting the clinic. It’s also a place where any licensed medical personnel can treat patients. Medical staff who can’t go on an overseas medical volunteering trip due to Covid-19 can come to our clinic. If an ophthalmologist performs a cataract surgery, we would take over and handle the post-op care. Finally ‘nuguna’ applies to sponsoring. Any Korean can support us financially. Nuguna Medical Center is for everyone whether it be getting medical help, treating sick people, or donating for a good cause.

Q. It has a common aspect with the ‘Everyone Shares’ package event collaborated by the Korean Red Cross and LOTTE HOTELS & RESORTS.
A. The sharing event with LOTTE HOTELS & RESORTS was meaningful even on a trial basis. The campaign was intended as a reminder that sharing can be saved up when you have means to spare. The KNRC wants to become a bank where you save your sharing coins. If you have many, put some in the sharing bank, and when you need help, find solutions at the bank. After recovery, you can resume saving in the bank again. If you are traveling for leisure, it often means you are capable of sharing. In that regard, I’m deeply pleased that LOTTE HOTELS & RESORTS has joined our campaign.

Q. What is your future goal as head of the KNRC?
A. It can be summed up into three agendas: expanding Nuguna Medical Center, securing the supply of safe blood, and strengthening our capacity to cope with disaster situations. Notably, our response system has gone through great changes. When there was a big wildfire in Uljin this spring, what followed fire trucks right behind were our emergency meal trucks. The KNRC provided meals enough to feed 50,000 people for 10 days. After the meal trucks were dispatched, we sent shelters(tents) and laundry vehicles for the victims. Recently we had a shower vehicle made. It was dispatched to the areas damaged by Typhoon Hinnamno. Also, we installed free mobile phone charging stations and wifi services at the shelters by partnering with LG Uplus. The KNRC is transforming into an organization that can correspond to disaster situations with a more comprehensive approach.

Q. What is a disaster prevention system?
A. If we used to focus our relief activities on follow-up measures, our goal now is preventing disasters from happening. We have commissioned research into the water flows in Mount Suraksan. We’re experimenting to see if we can use topography to collect the rainwater in an eco-friendly way, let it run down the valley little by little, and gauge the effect. If we can figure that out, we can stop bushfires from spreading over valleys to reach greater areas of the mountainous region. 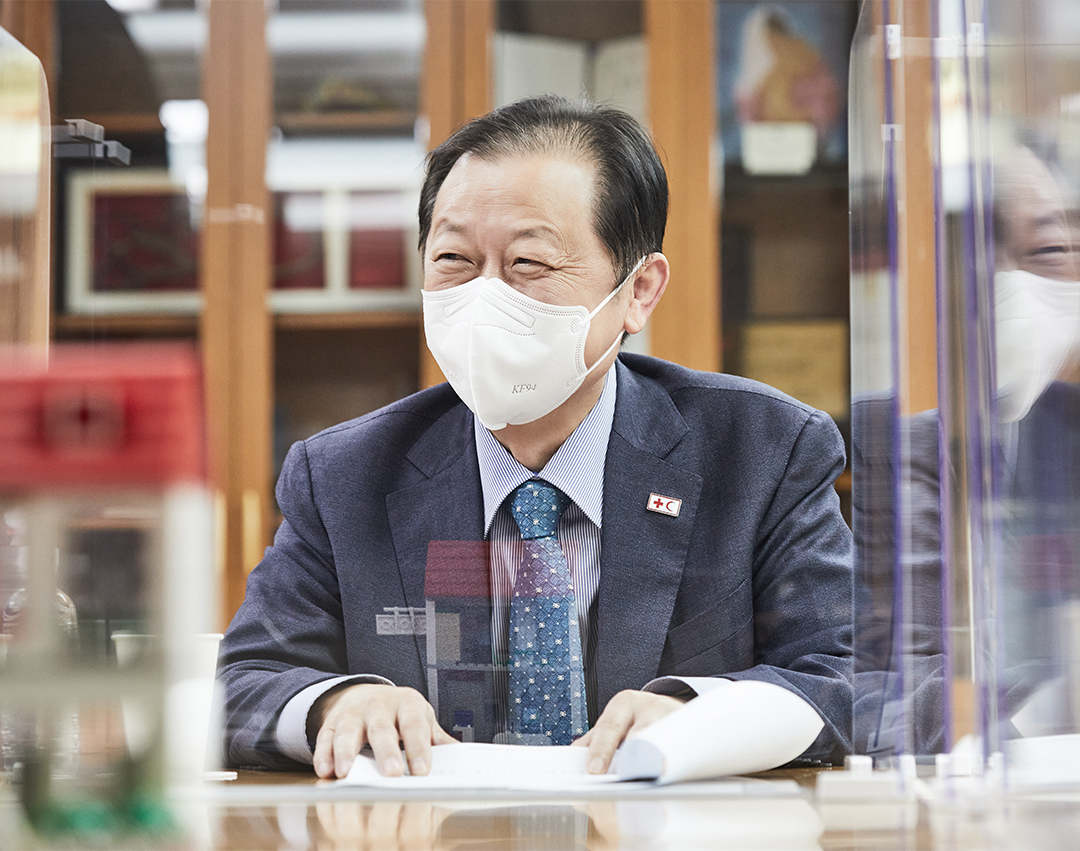 Q. There are many changes at the KNRC, it seems.
A. Pets were not allowed in the victims’ shelter before. Now we’re taking steps to meet the changing trend and designate some space for pets as well. We’re changing with respect to our volunteer workers, too. Before they had to go home after work without a chance to change or clean up. Now we offer new underwear and socks in our kit designed for volunteers. Returning home after freshening up will likely raise the odds they will come back to share again in the future.

Q. Do you often enjoy traveling? Can you share your criteria for choosing where to stay?
A. Travel widens your perspective, so it is quite meaningful. Even more so for children. I like traveling but can’t really find time. That’s why I try to observe the local lifestyle as much as possible when I travel to a foreign location to attend academic seminars. I prioritize the cost-effectiveness of the hotel most importantly.

Q. It is rather surprising that you answered cost-effectiveness.
A. It is important to have the best service available within a set cost. Most people only connect hospitals with medical services, but in fact hospitals have an element of a hotel in their operation. They have to prepare a lot to come up with the quality of service fitting for the price hospital users pay. Likewise, I become selective about the quality of service with the cost in mind when I’m looking for a hotel.

Q. Any particular service or facility that you seem to notice?
A. I watch how food is served, along with its quality. No matter how high-end the facility is, if the service is rough, I don’t go back there again. That said, LOTTE HOTEL has always given me satisfactory services. I especially remember visiting SIGNIEL BUSAN very fondly when I traveled there for a seminar. Their refined, sophisticated service and the beautiful view of Haeundae from the hotel were quite impressive.