Duong Lam, Rediscovering Forgotten Vietnam
Duong Lam Village, located on the outskirts of Hanoi, is a charming ancient town, with vivid traces of Vietnam’s rich history and cultural tradition.
Time touches everything, ever so carefully, as it flows. We call things touched by time ‘old.’ It used to be that things would grow old and ultimately turn to dust over time. However, ‘modernization’ has no patience for such a process. Things are easily demolished, replaced and made anew. Cities, with which modern people are familiar, are built in those spots. We have lost things built and created over time. 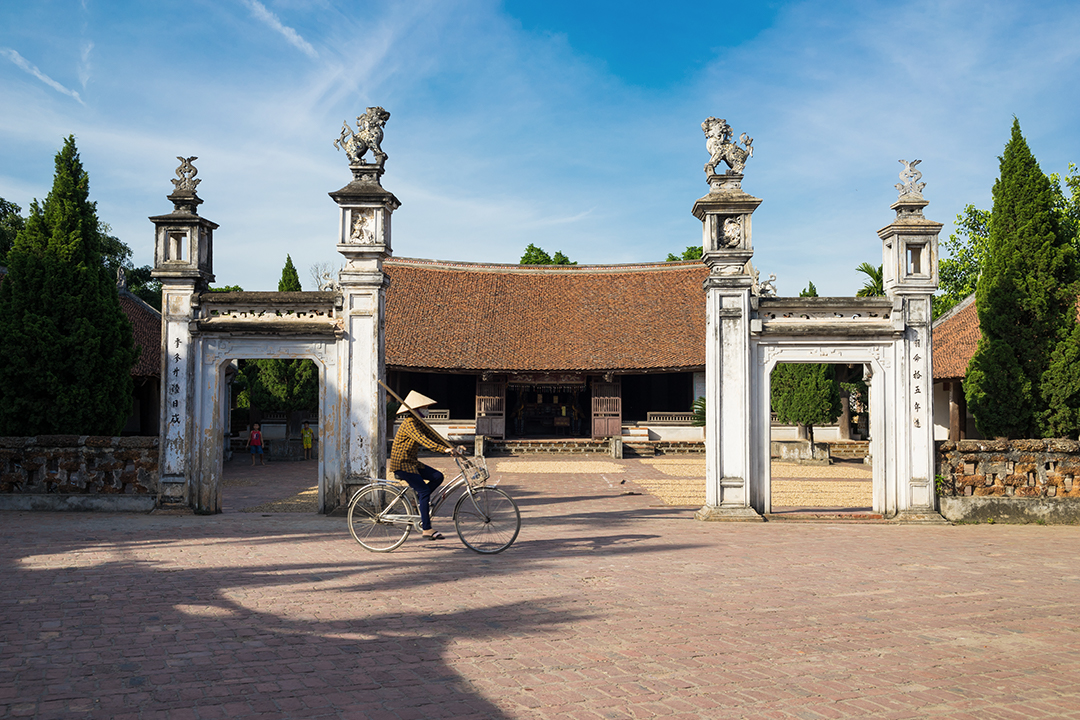 Duong Lam Village, in its all vintage glory

Village Where Time Stands Still
Amid rapid urbanization across Vietnam, there are still some villages that have let the time flow naturally. On the outskirts of Hanoi, the capital of Vietnam, you can still find neighborhoods that have retained their natural beauty, with traces of the country’s rich history and cultural tradition. Dong Ngac and Duong Lam are among the best-known ancient villages.
Duong Lam is believed to be the largest and the oldest ancient village in northern Vietnam. It sits about 50km northwest of Hanoi. 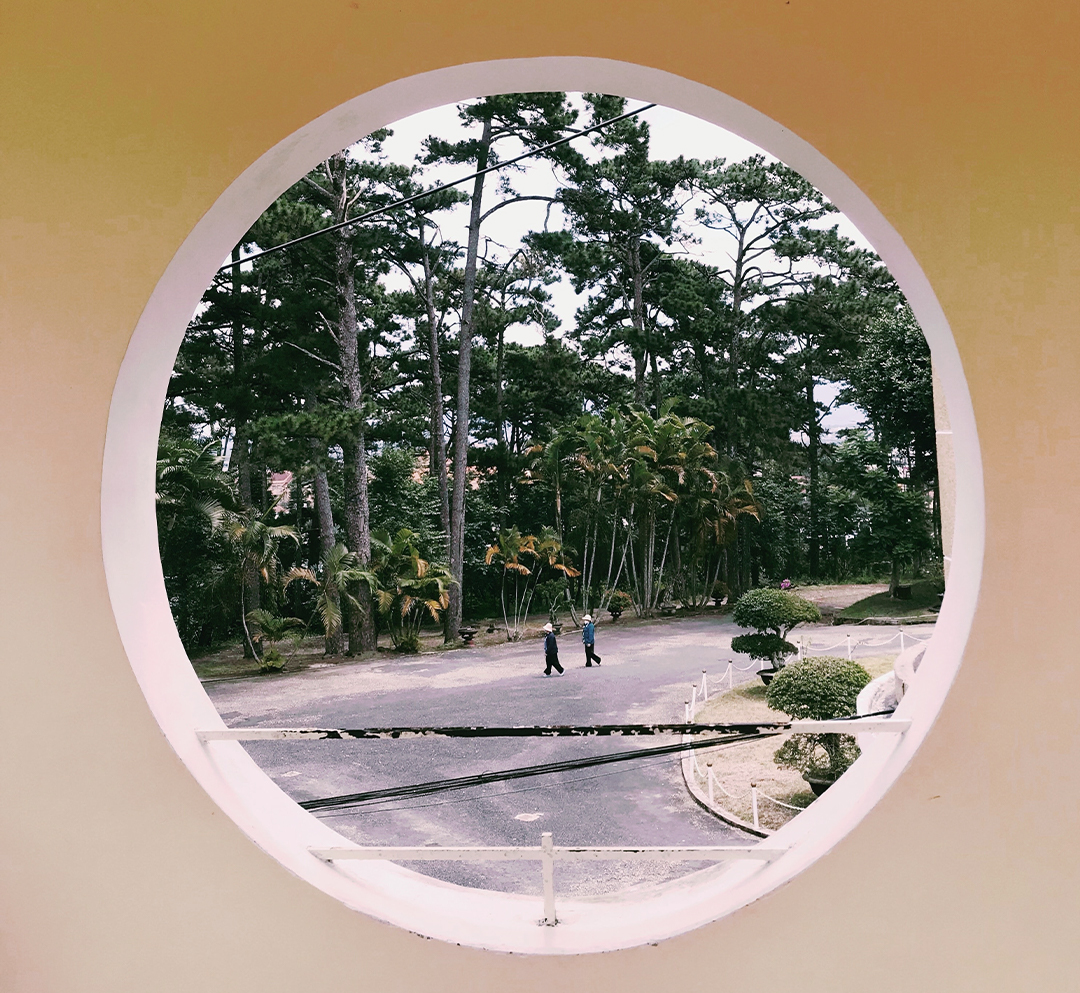 In Duong Lam, ‘hundreds of years’ is really nothing. “New Book of Tang,” a work of official history covering the Tang Dynasty, claims that this area was known as Tang Lin during the Tang Dynasty reign. Duong Lam produced Phung Hung, who led an uprising against China during the Tang colonial period, and Ngo Quyen, who established the Ngo Dynasty after the Chinese rule ended. To this day, there are some 900 homes built in the 17th or 18th century still standing. One tree is over 300 years old. Duong Lam is essentially a living cultural museum. It was designated as Vietnam’s first national historic and cultural site and received the UNESCO Asia-Pacific Award for Cultural Heritage Conservation in 2013. 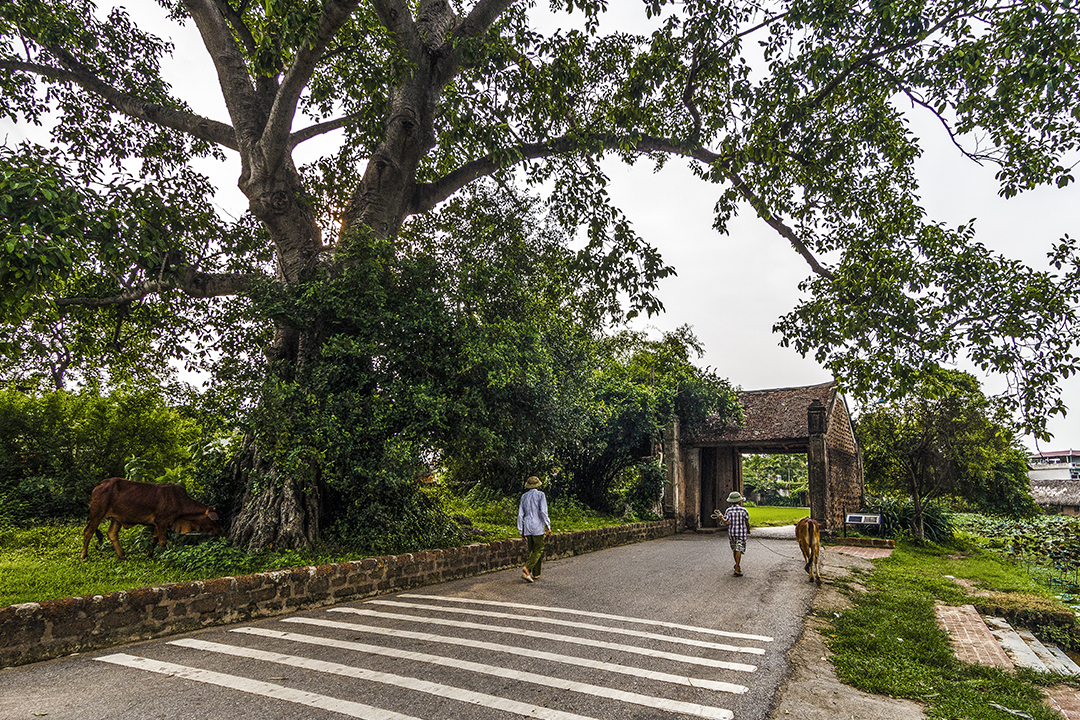 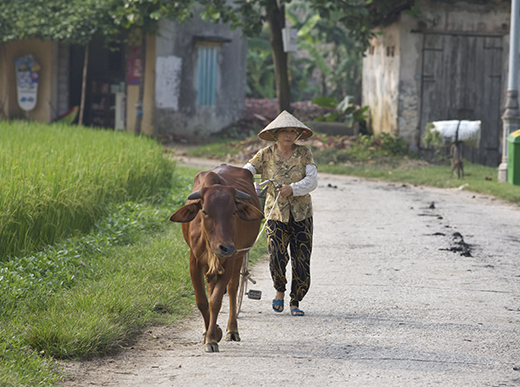 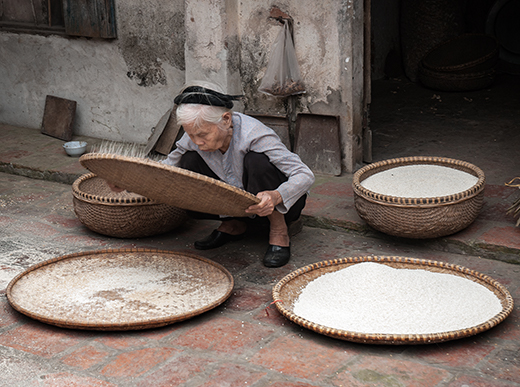 Farm Village and Its History
Duong Lam has the look of a typical farming village in northern Vietnam. There are homes built in traditional style using traditional materials, such as red bricks, clay, chinaberry trees and bamboos. You will also find communal areas, wells and other parts of a traditional town. Think of Jeonju Hanok Village or Andong Hahoe Folk Village in Korea.
There’s nothing fancy about Duong Lam, which exists as if to conform to the passage of time and its surroundings. As you walk in between red brick walls to explore the town, you will feel Vietnamese sensibilities with your entire body. The edge of the road painted in faded red and yellow; old wells; elderly men playing xiangqi; and children playing with rubber band. These are all forgotten sights from the past. A wooden door leans against brick houses; a bamboo fish trap hangs in the porch; the vast front yard is filled with jars containing Tuong (Vietnamese soy bean past) and soy sauce. The salty smell spreads in a way it only can in an old village like this. You will also see radish being dried on one side of the yard, and corns neatly hung under the eaves. These homes may seem exotic but the people’s way of life has an uncanny resemblance to that of ours in Korea. 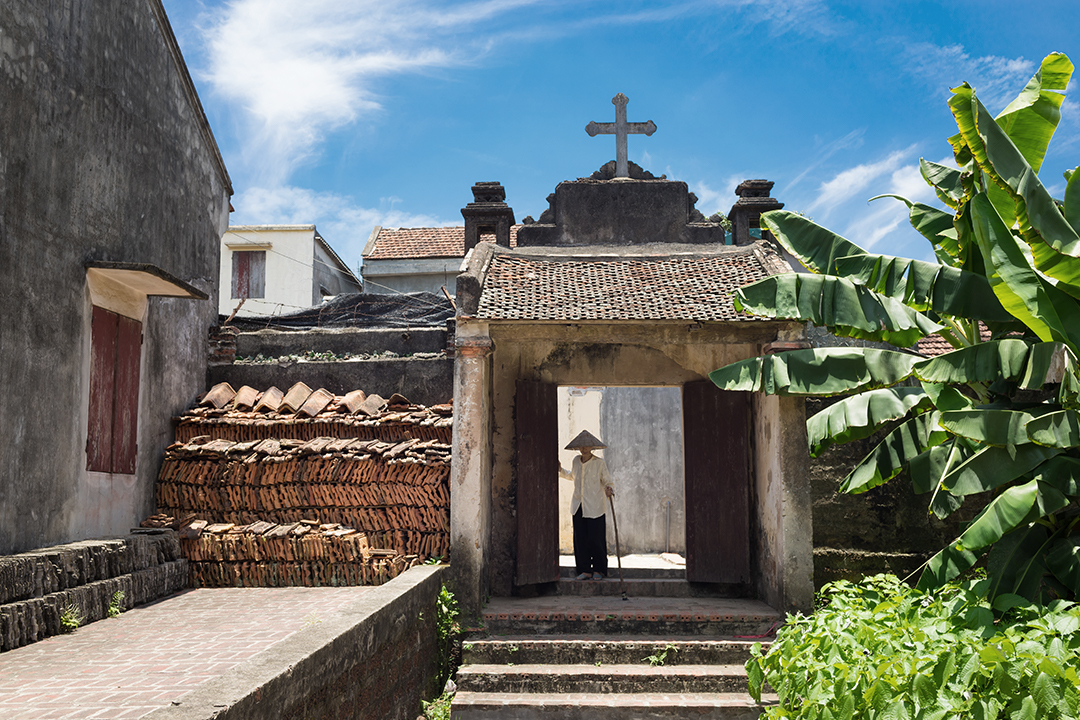 Small Villages within Duong Lam
Mong Phu is the best known of the nine traditional villages inside Duong Lam. Once you walk past the old town gate and reach the communal house built in 1833, close your eyes and feel the vibes of the days gone by. Don’t forget to check out old homes actually inhabited by residents. The oldest home in Mong Phu is about 400 years old and houses its 12th-generation of residents. 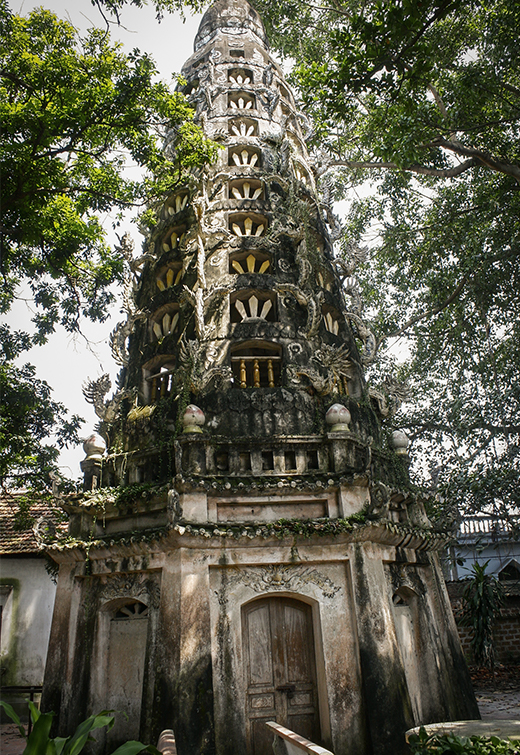 Duong Lam, much like other Vietnamese cities, is home to many Buddhist temples. 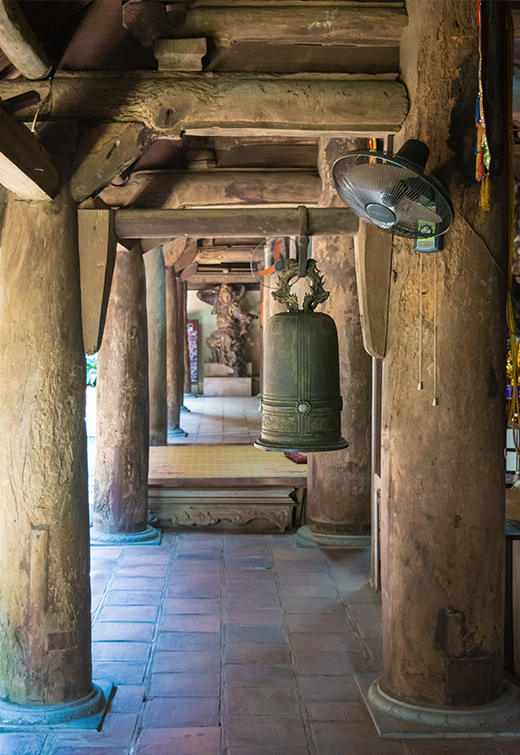 The royal mausoleum and temple will also be worth your time. Pagoda refers to a Buddhist place of worship in Vietnam. Ngo Quyen Temple and Tomb, Doai Giap Pagoda, considered the guardian of the town, and Phung Hung Pagoda are among the most important historical sites of the village. Mia Pagoda, built in the 15th century, is known to have the most Buddha statues among all pagodas in Vietnam with 287: six bronze statues, 107 wooden statues and 174 terracotta statues. 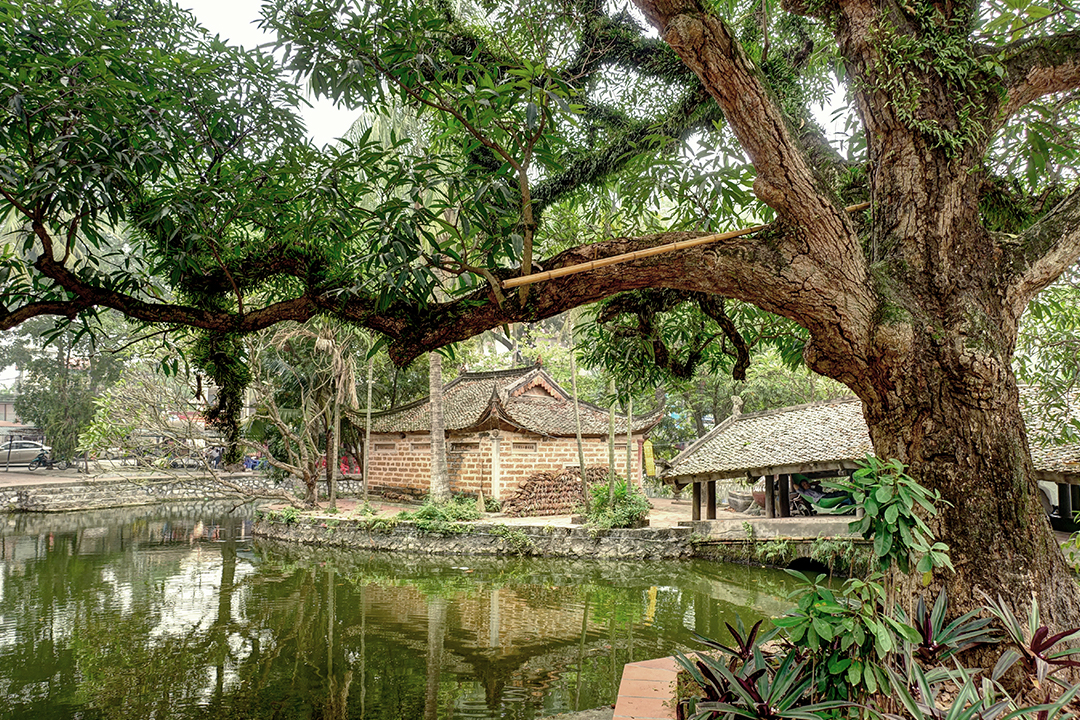 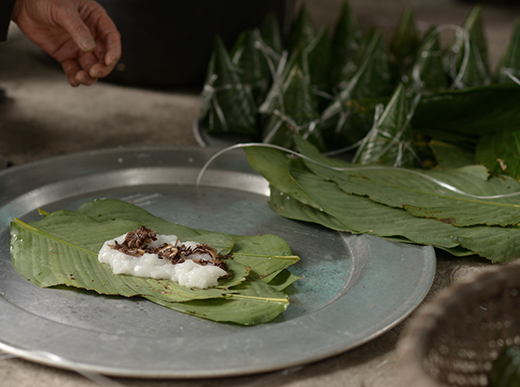 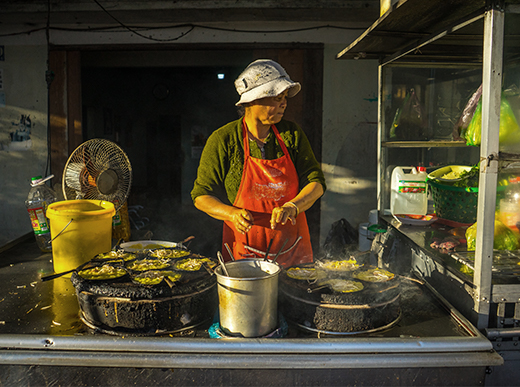 Enjoying Duong Lam
For your complete Vietnam experience, we recommend renting traditional costume, ao dai, and a bicycle. Riding a bike through the small town in your ao dai and conical hat will elevate your trip to a whole new level.
There are some street foods you have to try while here. Vendors dot the streets around Duong Lam, mostly selling traditional Vietnamese rice cakes and desserts. Cookies and candies in Duong Lam are similar with Korean-style crackers. Keo Doi Lac (peanut candy), Keo Vung (sesame candy) and Che Lam (made of salt, malt, ginger sticky rice powder and peanuts, colored with Pandan leaf or tropical fruits) are not to be missed. Bahn Te (rice caked filled with wood ear mushrooms and pork) is the local specialty of Son Tay, where Duong Lam is located.
You can board a bus bound for Son Tay at a bus terminal in My Dinh, home to many Koreans in Hanoi. 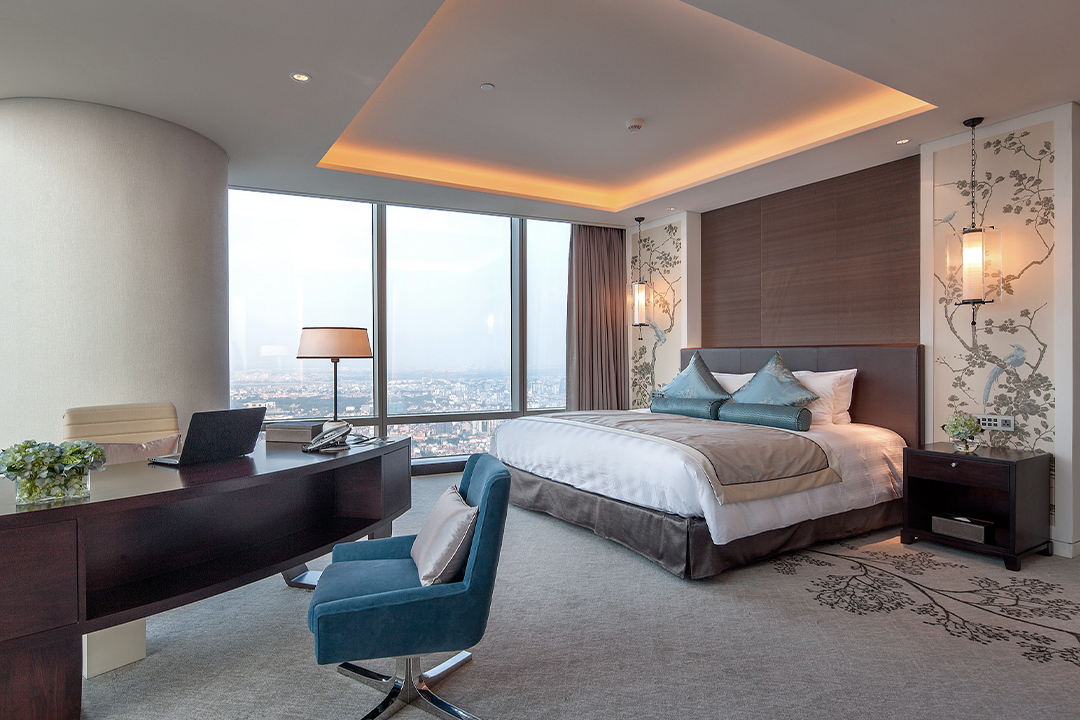