Best Sunrise Spot in Busan, Orangdae
In Busan, located in the southeastern corner of the Korean Peninsula, the best spot to watch the sunrise is the area around Orangdae. If you go there when the time is right and the weather is nice, you can capture some amazing landscape photos.
However, it is not easy to have a perfect sunrise experience, without a disturbance or an issue. Even on a relatively sunny day, if there is a speckle of cloud blocking the horizon, you won’t get to see the red sun . If you decide to wait until the temperature drops around midday, the sun would already be high up in the sky. Despite these challenges, people anxiously wait for the sunrise every year on New Year’s Day for their own reasons. 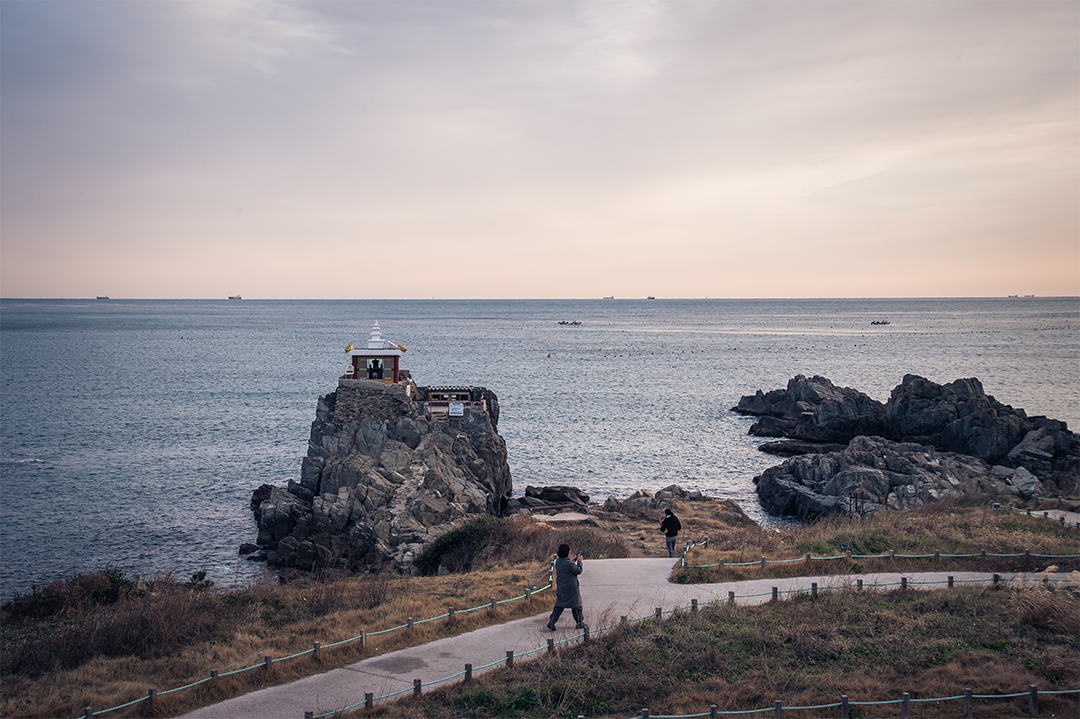 Professional Photographers’ Choice
Located on the eastern and southern end of the Korean Peninsula, Busan offers the view of the sun emerging from under the ocean. For that reason, beach parks in Busan, such as Haeundae, Songjeong-ri, and Gwangalli areas, become overcrowded on January 1 with visitors from the surrounding South Gyeongsang Province and Busan itself. Among various sunrise spots, there are ones selected by photographers and amateurs involved in  photography clubs. It is the area around Gijang. In particular, Orangdae Park offers the most captivating and clean view of the sun without much visual interference. If the weather permits, you can see the spectacle of the sun gradually emerging from the borderline between the sky and sea. 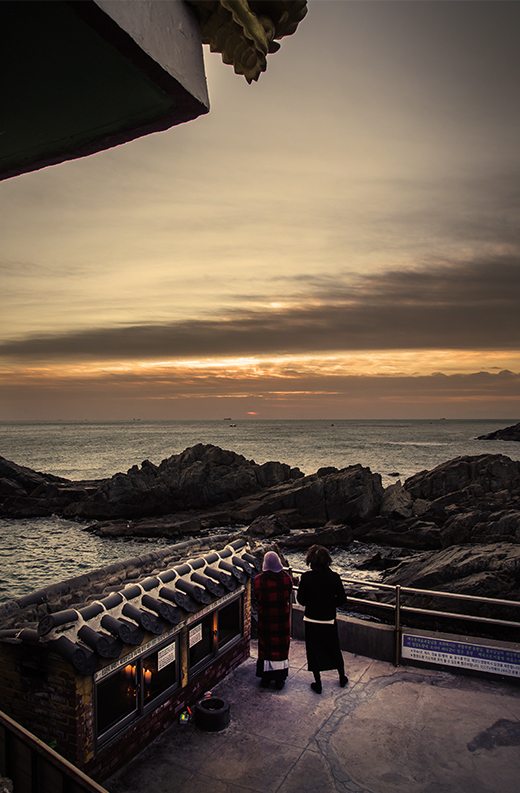 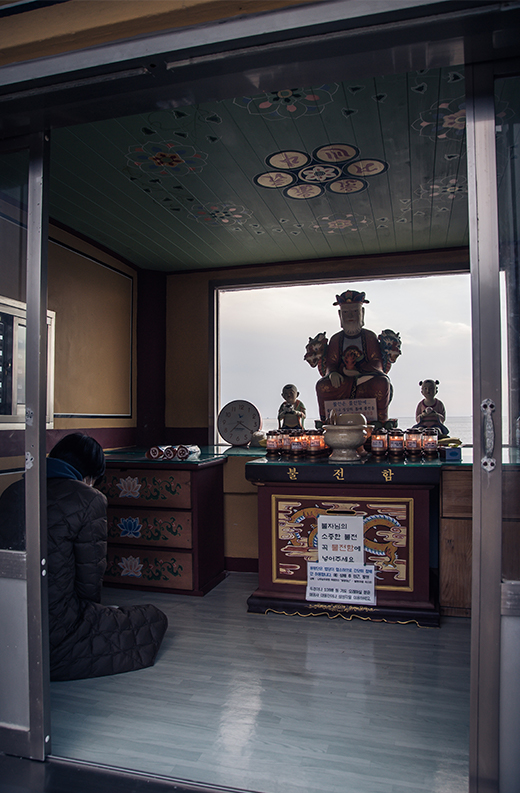 Tale of Orangdae
Orangdae refers to the formation of strange-looking big rocks on the cliff along the coast of Sirang-ri and Yeonhwa-ri in Gijang. The rocks are believed to be made of granodiorite from the Cretaceous period of the Mesozoic Era. It is mentioned as the background to the tale of the Yeonorang and Seonyeo couple in the "Memorabilia of the Three Kingdoms," or historic records of the three Korean kingdoms. While Yeonorang, the husband, left to pick some seaweed from the sea, gets drifted to Japan on a strange rock, Seonyeo, the wife, also searches for the husband on the shore, ends up on another rock, and gets reunited with Yeonorang in Japan. Somehow, what’s happening to them is related to the sun and moon losing light in Silla’s sky. After the king performs a rite, asking for the heavenly God to return the light, things finally return to normal again. That’s how Orangdae is named after Yeonorang, the husband.
Other theories regarding the origin of the rocks include the one where five scholars travel to Gijang to meet their friend in exile and end up drinking on the rock, which ultimately changed the name of the rocks to Orangdae from Mirangdae. Some say barbarians(called orangekae) have invaded the land, hence the name orangdae. 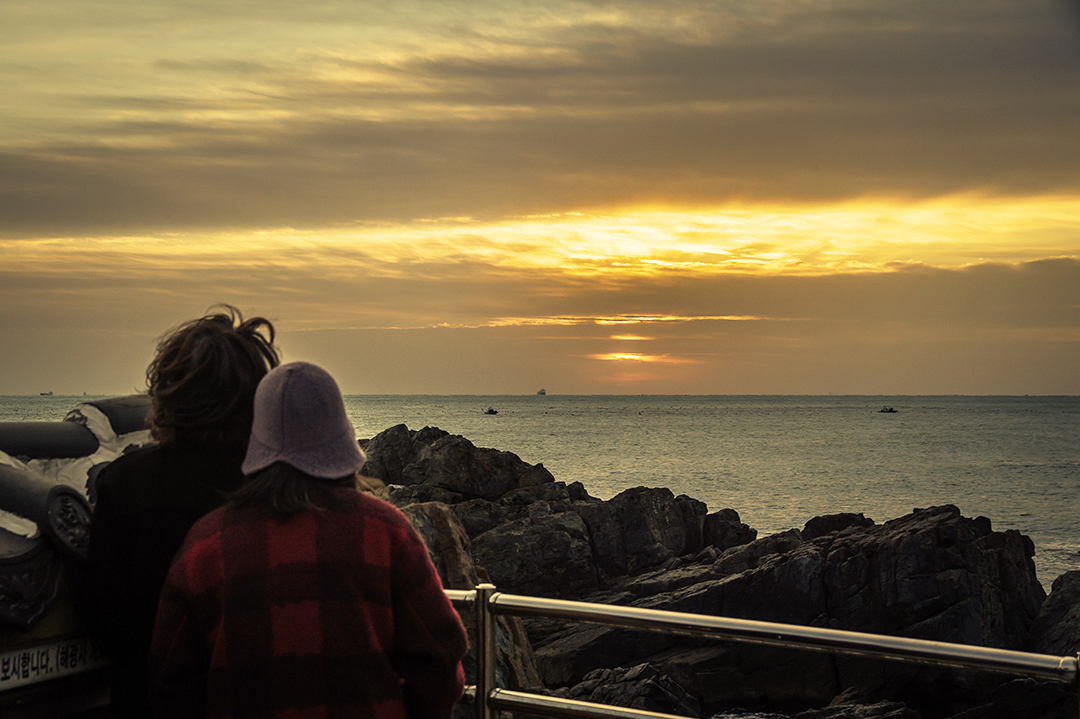 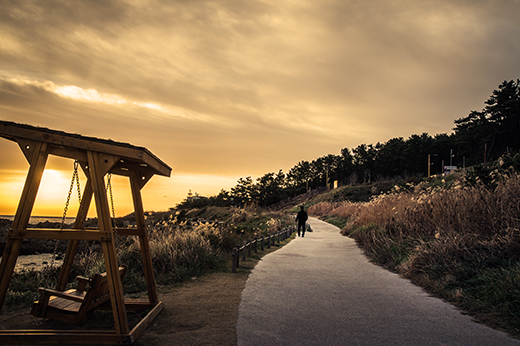 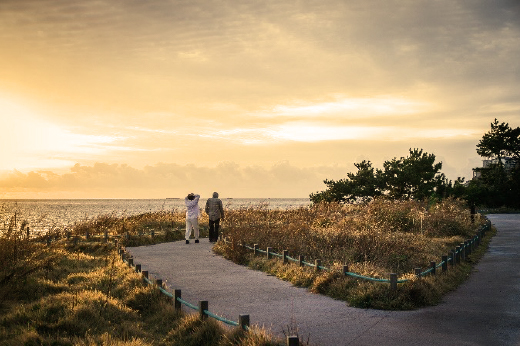 Along Osiria Beach Walk
The rocky formation became Orangdae Park. There is Haegwangsa Temple in the back of the park. When professional photographers prepare for the sunrise shoot at Orangdae, they often include Yongwangdan sitting on top of Chotdaebawi Rock. Haegwangsa manages Yongwangdan, which is a small Buddhist shrine built in the early 1900s to comfort the souls of fishermen who lost lives at sea. It is also where families would pray for the safe return of fishermen. Currently it is the only temple on the sea honoring the Sea God. Buddhists in the neighborhood would visit the shrine early in the morning to pray and watch the sunrise.
Orangdae Park is connected to the beach walk of Gijang Osiria. The layout of rocks along the walking trail is refreshing. The trail is about 2km long and passes Orangdae, Turtle Rock, and Dongam Village. It is a good morning walk option. 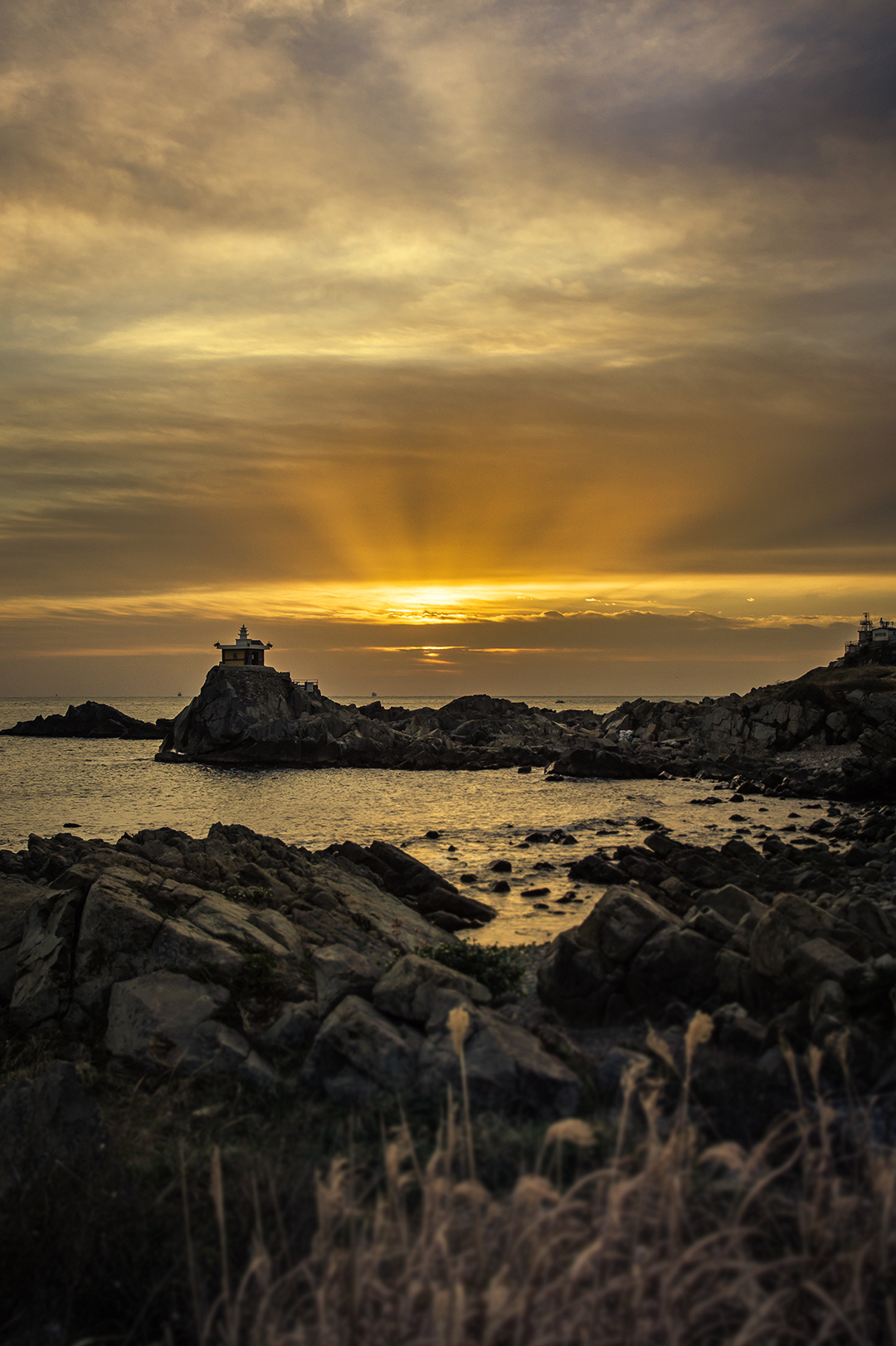 If you walk away from the beach walk at Orangdae Park, you can get to Seoamhang Port’s Bukbangpaje(northern seawall) Lighthouse. There are Yeonhwa-ri and Jukdo, the only haenyeo villages in Busan. Near the port, there is a unique-looking pine tree with branches pointing opposite directions. It’s called ‘Yeonhwa-ri Pine Tree.’ It is another photo spot for sunrise photographers. They would position the sun between the branches.
If you would like to successfully photograph the sun soaring from under the water using your smartphone, set the camera brightness level low for a more vivid image. Also keep in mind that 30 minutes before and after the beginning of the sunrise is known as ‘magic hour’. Half an hour before the sunrise offers you the optimal softest light for photographs. 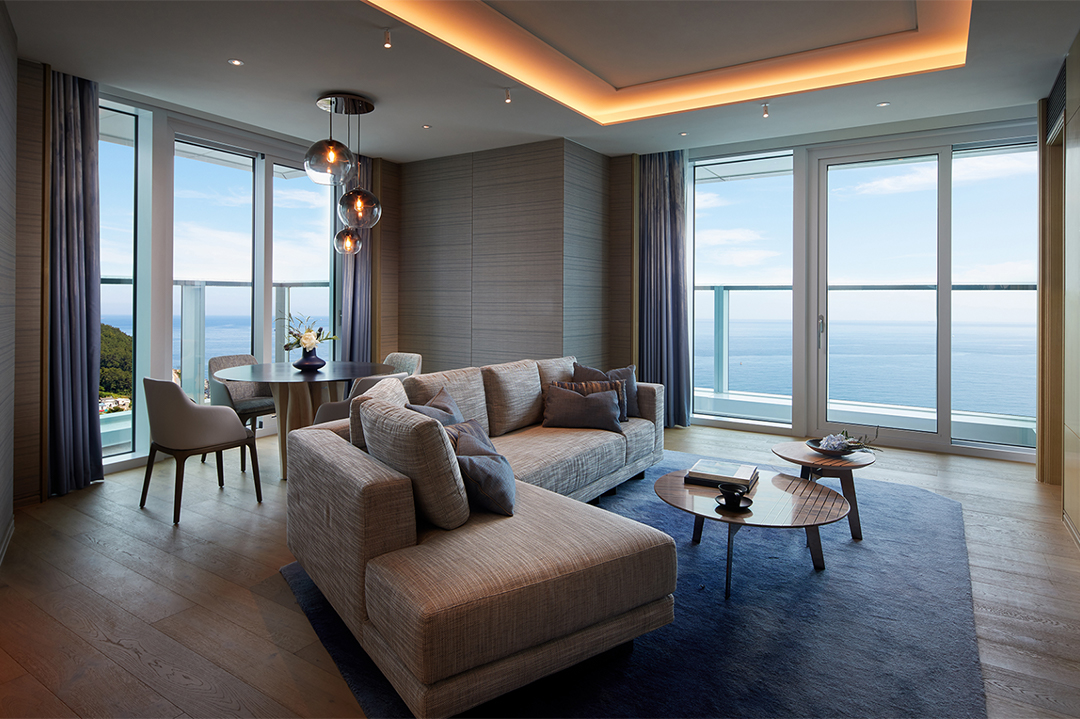