Experience Aurora by Air
Fly high in the air on Boeing 737, and meet aurora, or the spirit of god. You will be swimming in the curtain of lights.
Even in the dark of the night, there is a light that shines on the runway. And what about that sound of the engine that cuts through the wind? The plane takes off and reaches 11,000m in the air. The night sky is a canvas to twinkling stars and a picturesque aurora. Below the plane are clouds. And the sight of aurora that passes by is almost dreamy.

Yukon, Land of Aurora
Aurora means 'dawn' in Latin. It's also called 'curtain to heaven' and 'the spirit of god.' Aurora occurs when particles from the magnetospheric plasma are dragged by Earth's magnetic field and produce light when they collide with air molecules. In 1621, French scientist Pierre Gassendi gave it the name after Aurora, the Goddess of Dawn in Roman mythology. It usually happens in regions located between latitudes of 60 to 80°, and the closer a place is to the polar regions, the likelier it is to produce auroras. It's a fairly regular occurrence in Nordic Europe, Alaska and northern Canada. 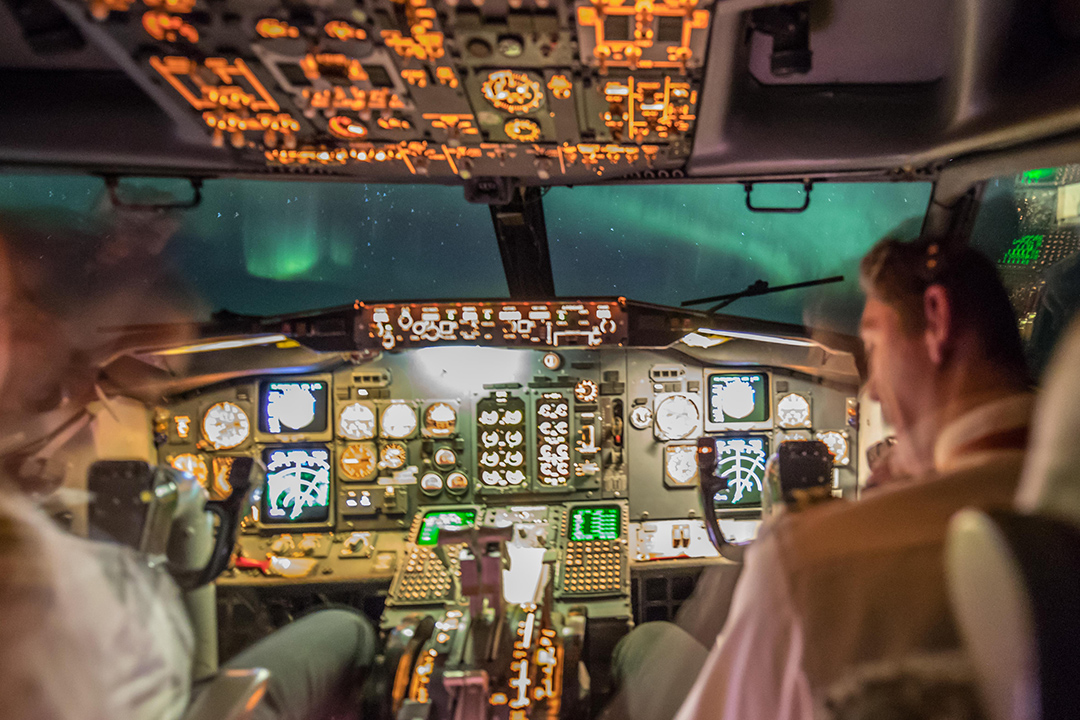 Cockpit of a plane for Aurora|360 program

In Canada, Northwest Territories and Yukon are two popular aurora destinations. Northwest is home to Yellowknife, selected by NASA as the world's best place to see aurora. Yukon is perhaps not as well known in Korea as Yellowknife. But it's emerging as a popular destination, not just for auroras, but for its Kluane National Park, which is also a UNESCO World Cultural Heritage Site, Yukon Wildlife Preserve, which protects wild animals in northern Canada, and the exotic Takhini Hot Springs. Kluane National Park is famous for the world's largest ice fields outside the North and South Poles. Whitehorse, capital of Yukon, is a two-and-a-half flight from Vancouver, making it more accessible than Yellowknife.

Aurora in the skies in Whitehorse. ⓒ SHUTTERSTOCK

World's Cleanest City
The aurora tour we're about to introduce here begins in Whitehorse. It used to be called Canadian Eldorado because Whitehorse served as a gateway to Dawson City at the height of the late 19th-century Gold Rush. Friedrich Trump, grandfather of U.S. President Donald Trump, opened a hotel in Whitehorse in the early 20th century. When Gold Rush came to an end in Dawson City, Whitehorse, a logistics and industrial town, inherited its legacy and became Yukon's capital.

And Whitehorse is enjoying a new rush as a tourist destination. Bordering Alaska, Yukon stretches for 482,443 k㎡ (or 4.8 times the size of South Korea) but only has about 34,000 in population. And Whitehorse has 24,000, or 70 percent of the entire Yukon population. According to Guinness World Records, Whitehorse is the city with the least air pollution in the world. And to preserve nature, the city doesn't permit construction of buildings more than four stories high. It may be a territorial capital, but Whitehorse doesn't boast any skyscrapers, or does it exude much of a vibe. You can cover the city on foot in a single day. But it attracts numerous tourists from around the world for auroras. There are many different ways to watch auroras in Whitehorse. The simplest and most primitive way is to sit by a bonfire near your hotel and stay overnight waiting for an aurora to happen. Or you can book a room at a hotel best known for aurora sighting and follow your guide in a tour program. But here's the most special way, and it will take you closer to an aurora than anything else.

Watching Aurora from Sky
They say only God knows when an aurora will happen. It all depends on weather and air conditions. Experts recommend staying in a region for at least three nights to give yourself a better chance. Auroras happen frequently between June and August, and again between November and April. If you stay in Whitehorse for three or more nights in those periods, then there's about 70 to 80 percent chance that you'll see an aurora. So what is this special way that takes you the closest to an aurora? You can watch it from the sky. With Aurora｜360 tour, you can watch northern lights from the comfort of an aircraft cabin. Canadian airline Air North developed this spectacular tour program in 2017. And we're not talking about flying in a helicopter or some small plane.

Aurora|360 lets you experience the northern lights by air.

If you sign up for this package, you'll board Boeing 737-500 at Whitehorse Airport at 11:30 p.m. And the aurora viewed from 11,000m in the air is that much more special than the one you see from the ground. No mountains or buildings block your view, and you'll get a much clearer and closer look at the northern lights. During the flight, passengers will be offered complimentary gin from Yukon Brewing Company, along with warm drinks and snacks. And Phil 'the Bad Astronomer' Plait and William Murtagh of the White House Office of Science and Technology Policy will even give in-flight lectures. Neil Zeller, a Canadian photographer specializing in aurora pictures, will even help you take photos.
Aurora｜360 runs from Feb. 7 to 12. The program also includes visits to Yukon Wildlife Preserve and Takhini Hot Springs. The exclusive offer is available to the first 80 passengers. It's rare enough to see an aurora. And to do it by air will be truly once-in-a-lifetime experience.